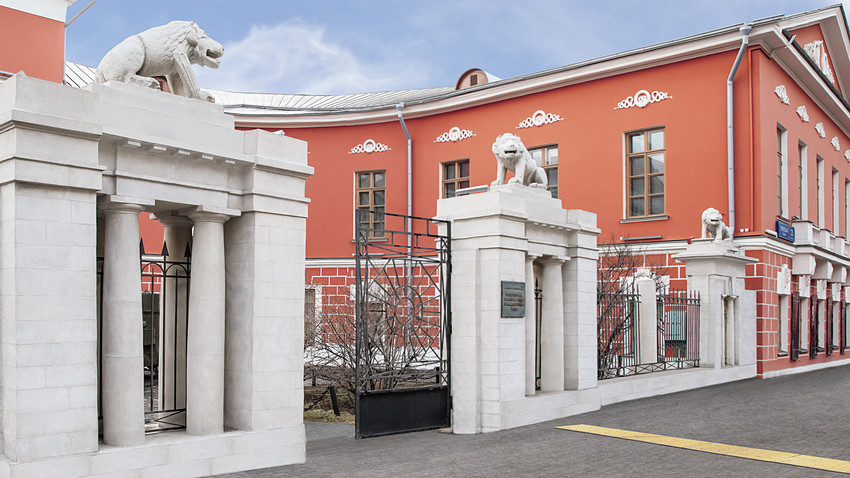 Department of Cultural Heritage of Moscow
We can now see the Moscow English Club the way poet Alexander Pushkin knew it, and witness the Gagarin Mansion just how Leo Tolstoy described it in his novel, War and Peace. Restoration of these buildings was made possible thanks to historical and architectural research, and has brought back the original colors and facades.

1. The Resurrection of Christ Church and bell tower in Rogozhskoye Cemetery

Built in 1910, this church and bell tower served the Rogozhskoe Old Believer community. While the church was closed by the communists in 1934, it withstood aerial bombardment during World War II. After the restoration in 2009-2014, the building once again functions as an Old Believer church.

This mansion was originally built in 1866, but completely reconstructed in 1894-1896 by Lev Kekushev, one of the leading Moscow art nouveau architects. In Soviet times, the building belonged to the Institute of Art History and then housed the Embassy of Tanzania; therefore, the house was well preserved. Nevertheless, it was restored in 2013-2015, and the building’s original color - mauve - was returned.

The Zaikonospassky Monastery, which was founded in 1600, has been a center of learning in Russia since 1630 when a school opened there to teach Latin and Greek. In the late 17th century, the Slavic Greek Latin Academy, the first higher educational establishment in Russia, opened here. The bell tower was built in 1899-1900, then partly demolished in 1924, and finally restored in 2010-2014.

Built in the late 18th century for the Gagarin family, this mansion housed the Moscow English Club before it moved to the Razumovsky Palace on Tverskaya. In 1806, the mansion hosted a dinner honoring Prince Bagration after his victory in the Battle of Schöngrabern. This dinner was described by Leo Tolstoy in War and Peace. In 1830, the building became a state-funded hospital, and it kept this function until 2009. Since restoration was completed in 2013-2015, the building houses the Moscow City Duma.

5. The Church of St. Maxim the Blessed, Varvarka Street 4

6. Lion on the fence of The English Club, Tverskaya Street 31

Main gate of The English Club (Razumovksy palace) in Moscow after restoration.

Frequented by many famous 19th century Russians, including Leo Tolstoy and Alexander Pushkin, Moscow’s English Club met in Count Razumovsky’s palace on Tverskaya Street starting in 1831. The lions by its gates and fence are even mentioned in Pushkin’s renowned poem, “Eugene Onegin.” In 2015, restoration was completed.

7. The Church of St. George on Psovskaya Hill, Varvarka Street 12

Originally built in 1864, the station was reconstructed over a long period that stretched from 1913-1940, and was based on a project by Moscow’s leading architect of the time, Alexey Shchusev. Restoration was made in 2013-2016.

9. The Church of the Icon of the Virgin Mary “Seeker of the Perished,” Zatsepa Street 41

The church was built in 1904-1905 as a chapel for the Commercial College of Women, which was run by the Moscow Commercial Institute. In 1929, the church was handed over to the Plekhanov Moscow Institute of National Economy. In 2002, the church reopened for worship, and restoration was carried out in 2015-2016.