10 Russian artists who made their mark on the world 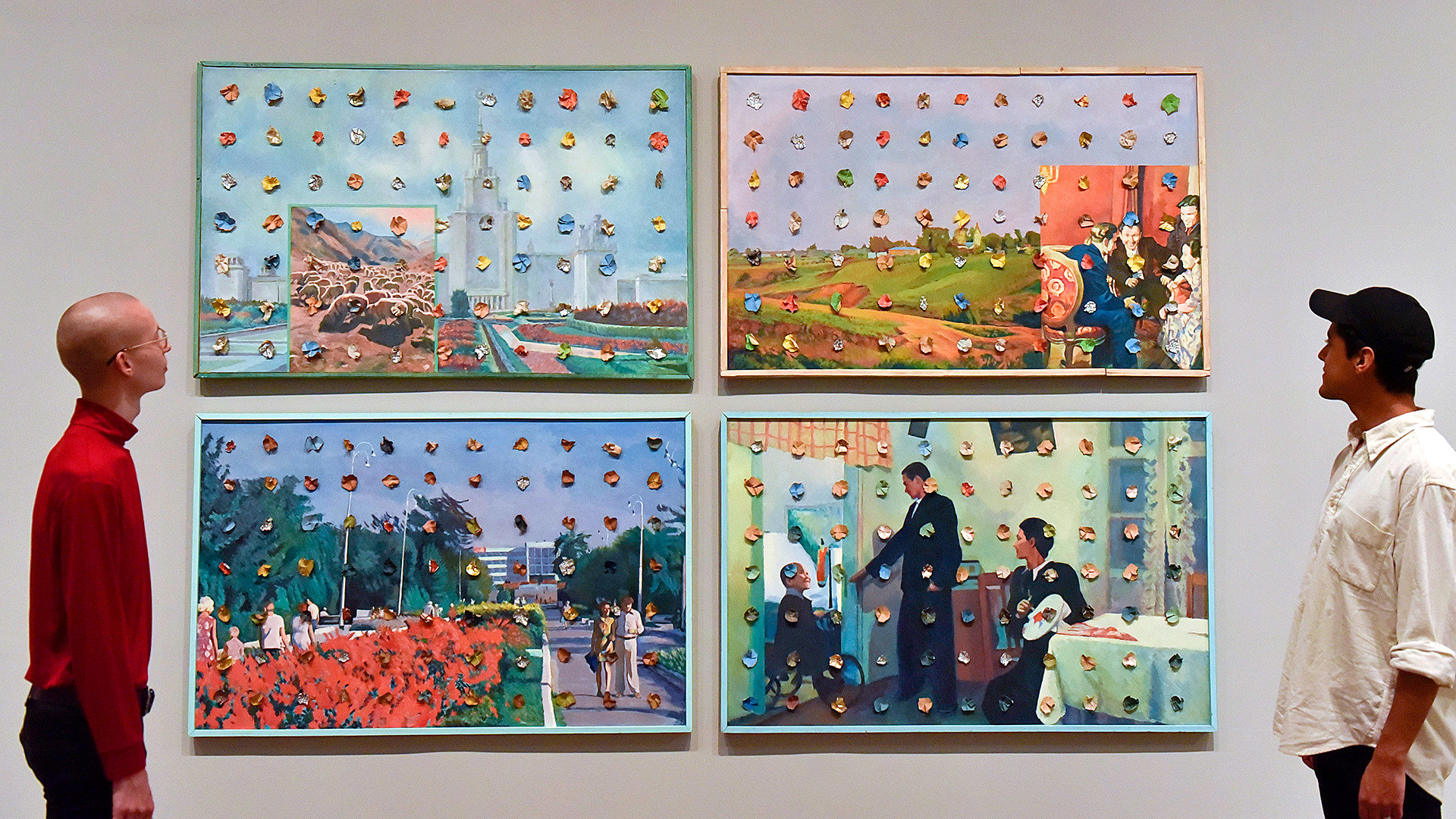 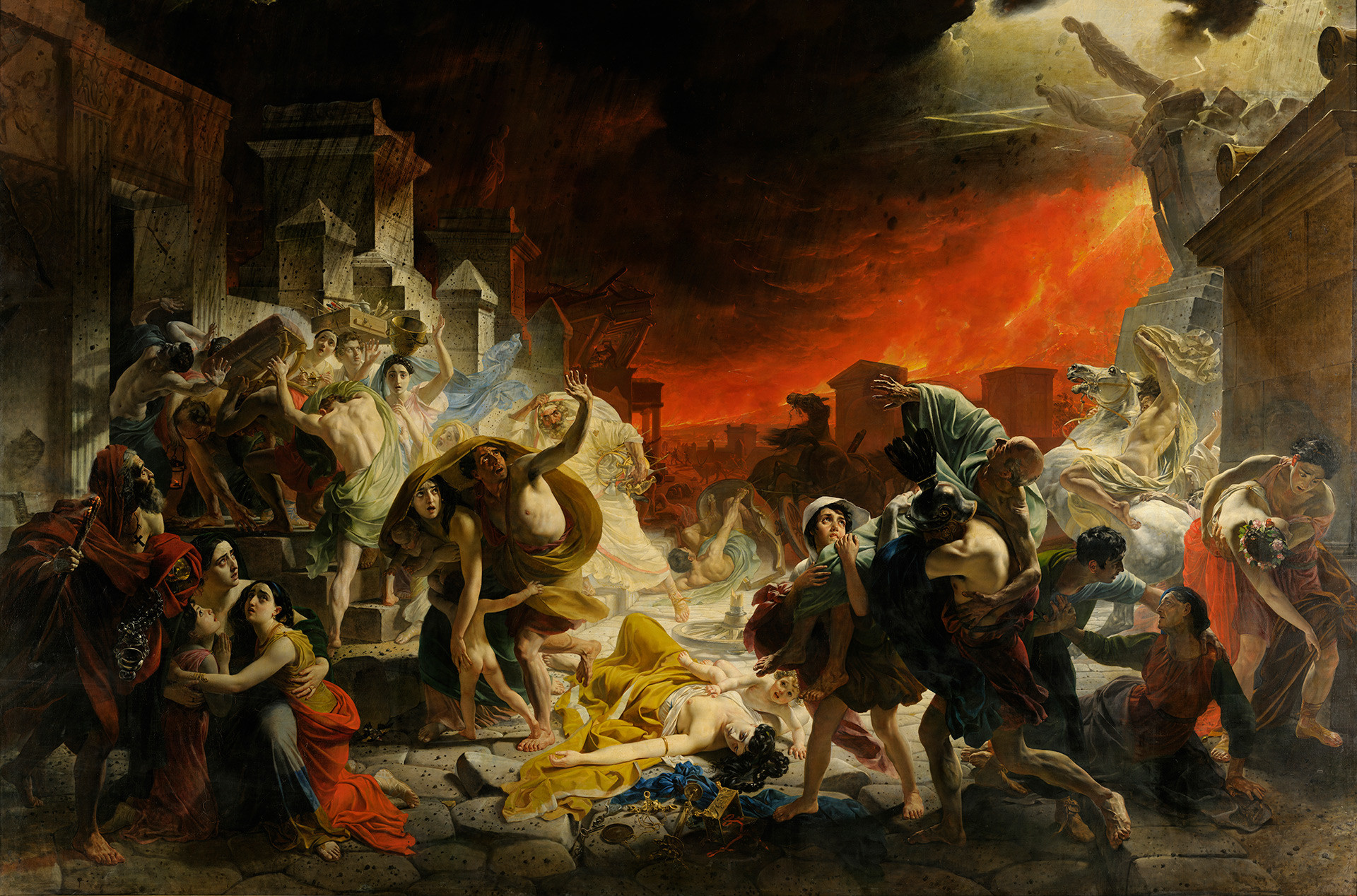 One of the best Russian portraitists, Bryullov traveled extensively in Europe, spending a large part of his life in Italy. The monumental canvas The Last Day of Pompeii, its vast size (6.5 meters in width) dramatically depicted the moment when the antique town was destroyed, brought him international recognition. Its first display in Rome produced a furor. Then the painting was moved to the Louvre in Paris, where it was awarded a gold medal at the 1834 Paris Salon. it was presented as a gift to Tsar Nicholas I and is now in the Pushkin Museum in St. Petersburg. The portraits he was commissioned to paint by the Italian nobility in large numbers also made Bryullov immensely popular. The artist spent the last years of his life near Rome, in the house of his friend Angelo Tittoni, whose family inherited part of Bryullov’s artistic legacy. 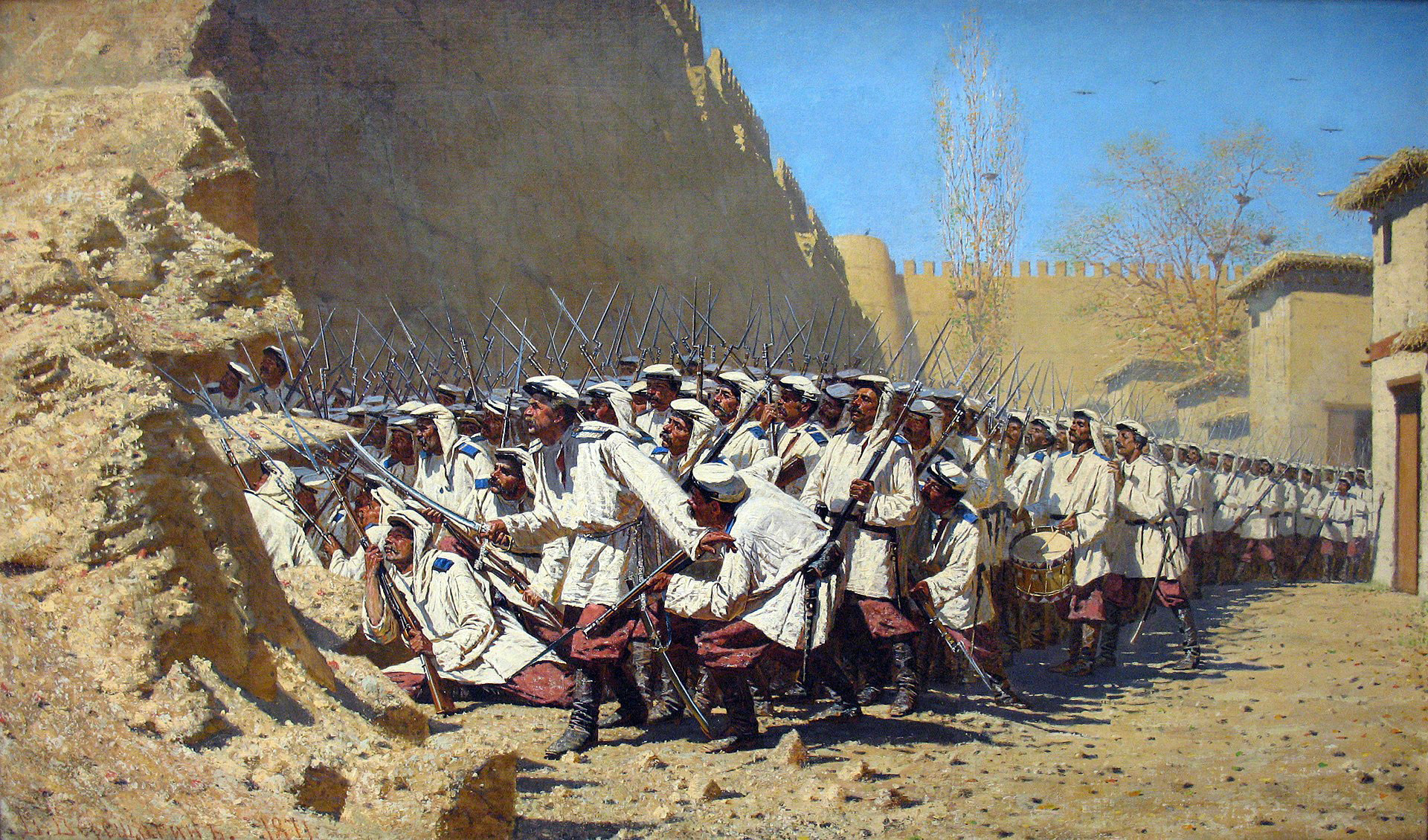 At the city wall. "Let them enter!, Vasily Vereshchagin

Vassili Verestchagin, Painter, Soldier, Traveler was the title of a book published by the Association of American Artists for his first exhibition in the U.S. The three descriptions encapsulate his whole life. A famous battle scene painter and ethnographer, Vereshchagin took part in military campaigns and witnessed what he later depicted on canvas (he even met a soldier’s death during the Russo-Japanese War). He owed his fame to major European and American exhibitions which he staged himself, carefully designing their "scenography" and displaying series of paintings alongside artifacts from his travels. Among the best known are an exhibition of his Turkestan series at the Crystal Palace in London in 1873 and a triumphant exhibition in New York in 1888, followed by a three-year tour of major American cities (Chicago, Philadelphia, Boston, St. Louis etc.) and an auction in 1891 at which 110 works were sold. 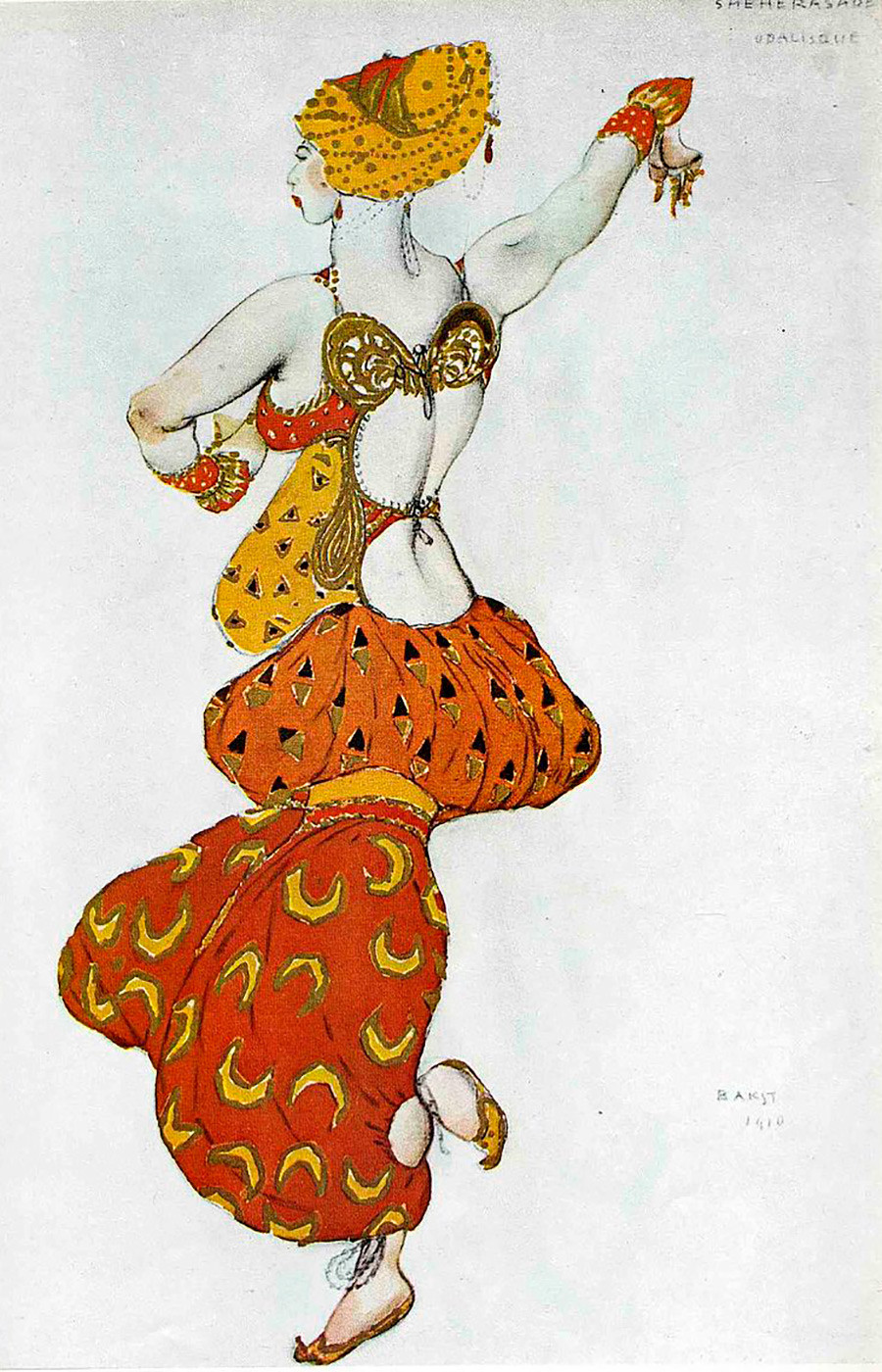 1909-1910 Sergei Diaghilev brought his Scheherazade and Cleopatra ballets to Paris. Their astounding success brought fame not just to the dancers but also to Bakst, the artist who designed the costumes and scenery. "Russian Orientalism" with its exquisite eroticism moved from the stage to fashionable living rooms - Bakst sold his sketches to designer Paul Poiret, introduced the fashion for turbans, wide trousers colored wigs, and dressed the extravagant Marchesa Сasati. After the ballet premieres an exhibition at the Louvre, which proved to be a and commissions for portraits and wall paintings from American millionaires such as the Rothschilds and Morgans. In 1914 he held his first exhibition in the U.S., which successfully toured from New York to Philadelphia. 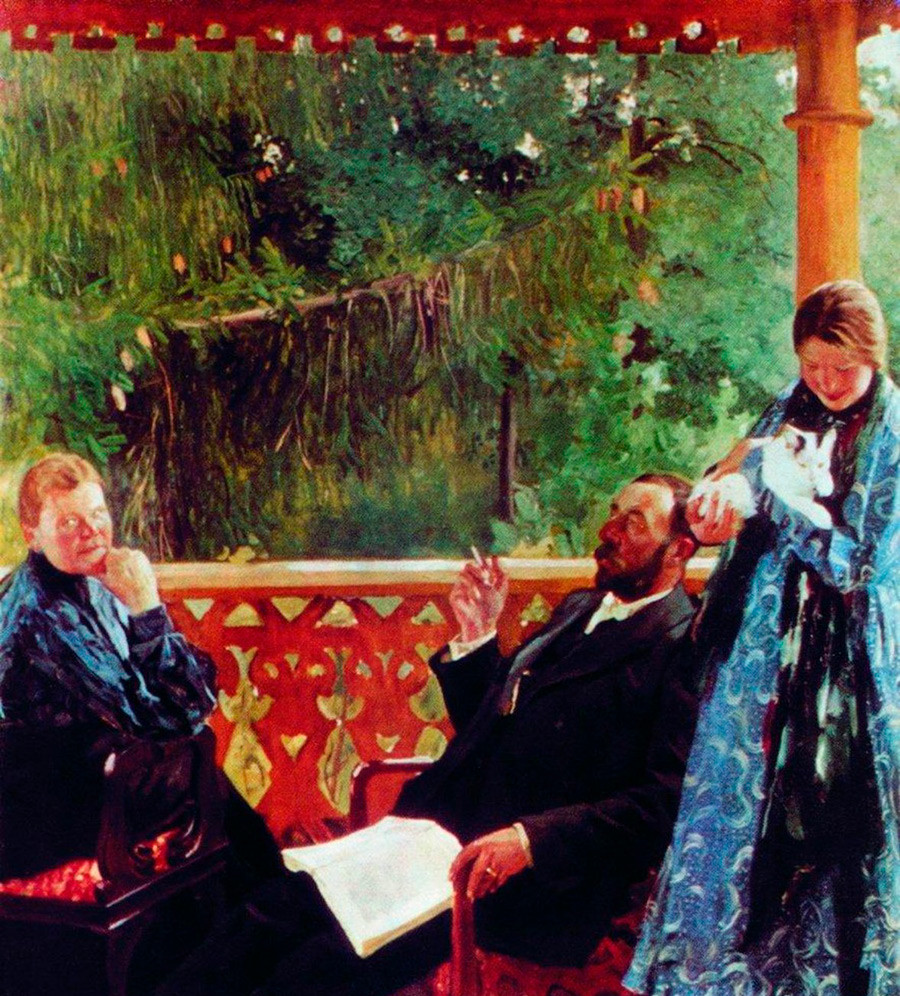 The creator of the most "Russian" of paintings depicting fairs and merchant's wives by their samovar, Kustodiev is the only Russian artist to have been awarded a gold medal at the Venice Biennale in its entire history. In 1907 the Russian Pavilion was curated by impresario Sergei Diaghilev. Thanks to him, Europe saw the best Russian painters of the time, but it is Kustodiev who was awarded the top prize. The jury was much impressed by his Portrait of the Polenov Family, which is now at the Belvedere Museum in Vienna, and Portrait of Count N.P. Ignatieff. A study for the latter could be viewed at TEFAF - The European Fine Art Fair - in Maastricht in March. 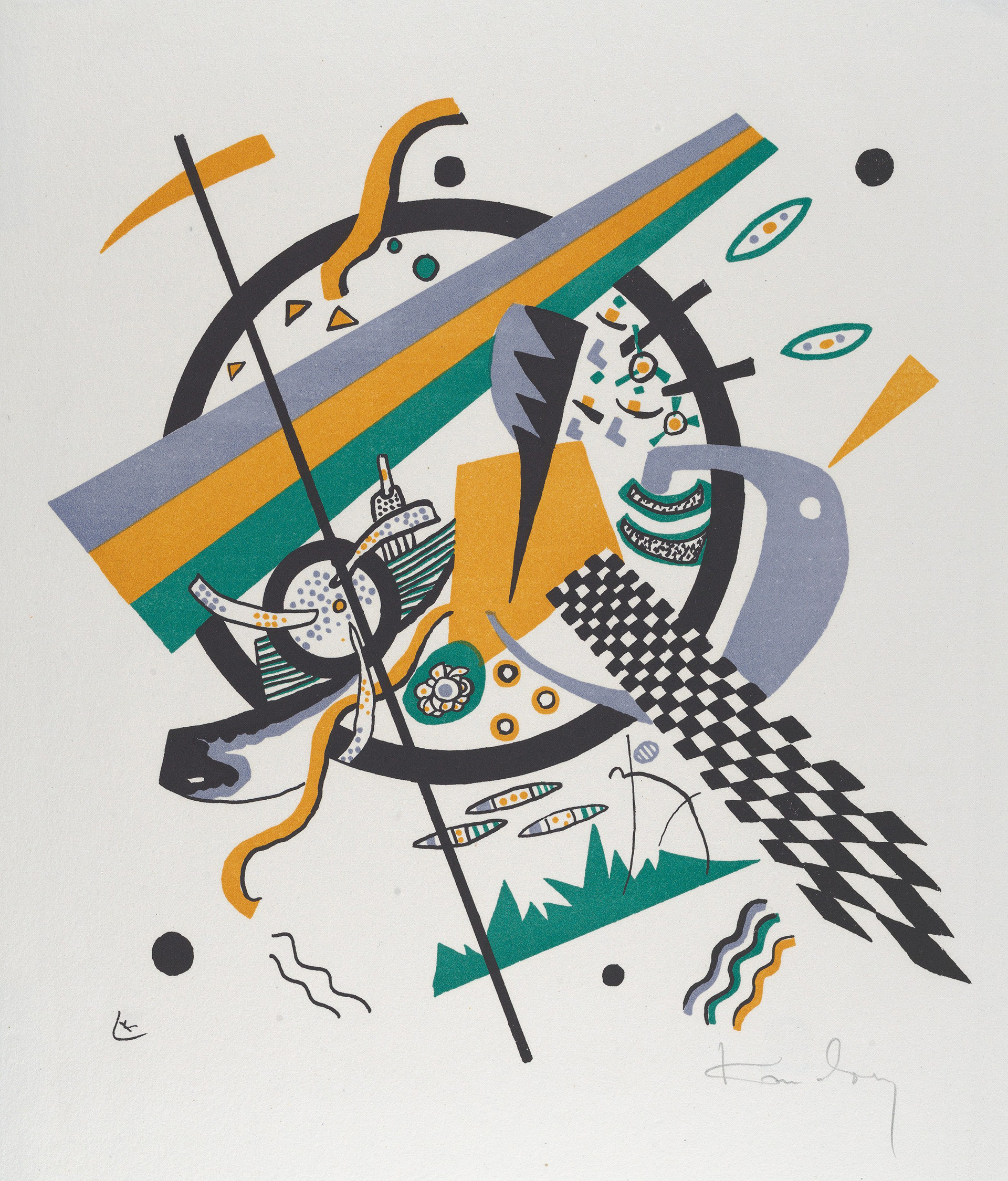 inventor of abstraction divided his life among Russia, Germany France. His main work was done in Munich, the city where he attended the Academy of Fine Arts, formed the Blue Rider group of expressionist artists, mounted his first one-man exhibition and taught at art school, later relocating to teach at the Bauhaus in Weimar, Dessau Berlin". It is in Munich that one of the best collections of his canonical works is to be found. Another major collection where the emergence of non-objective art can be traced is the Guggenheim Museum in New York. 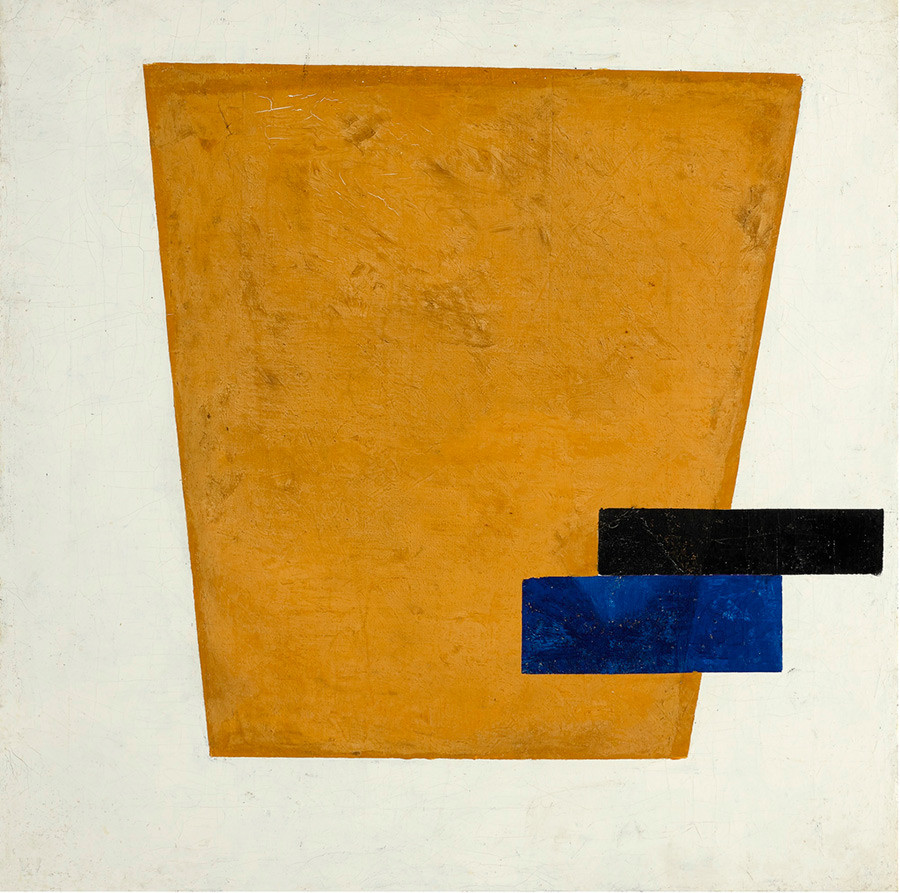 Malevich's Black Square of 1915 became a symbol of the avant-garde and a manifesto of the new art world in which the principal criterion was no longer art's likeness to the real world. Outside the borders of the USSR, the triumphant march of Suprematism - the movement that Malevich invented - began in the late 1920s: A large exhibition of the artist's work was held in Warsaw, followed by Berlin. The paintings he selected for the show never returned to Russia - they can be seen today in Amsterdam's Stedelijk Museum and the Museum of Modern Art in New York. Malevich also remains the most expensive Russian artist - his Suprematist Composition was sold by Sotheby's in 2008 for $60m dollars. 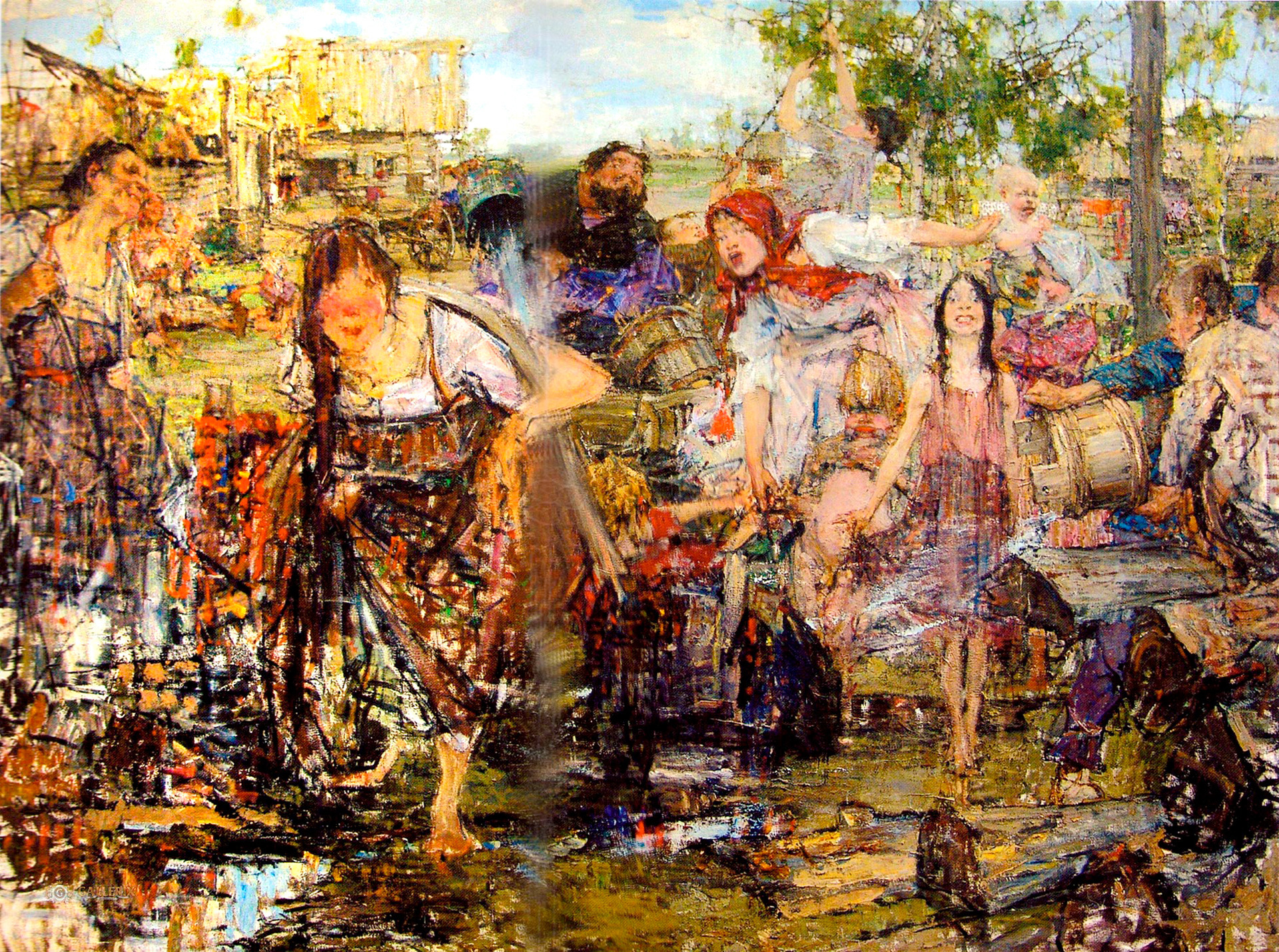 Born in Kazan, Fechin - a virtuoso portrait painter who created his own recognizable style - did not approve of the Revolution and in 1923 emigrated to the U.S. where he lived for 30 successful years. In New he held exhibitions and found a ready clientele, which included major collectors and celebrities. His works are to be found in many American museums and private collections and appear regularly at auction the world over. 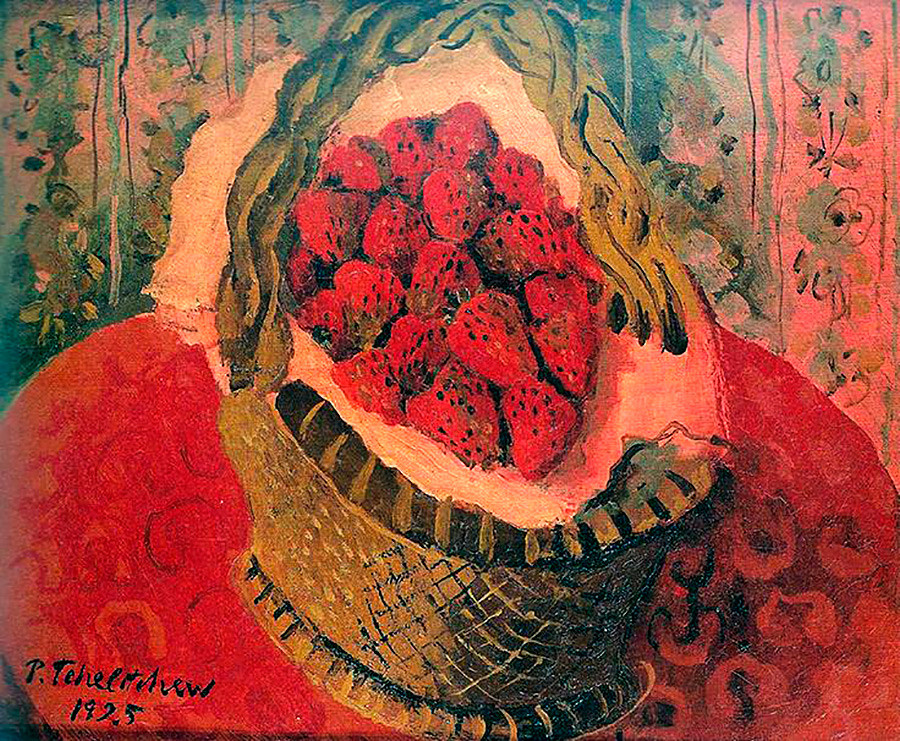 A classic exponent of modernism,  a mystic, the "Russian Dali," Tchelitchew was one of the most colorful emigres of the revolutionary period. Until recently Tchelitchew was better known in Europe and America than Russia. The Museum of Modern Art in New York holds around 150 examples of his work, while Moscow's Tretyakov Gallery has one, bequeathed in the artist's will. A scion of a noble family, he emigrated to Berlin in 1920, later moving to Paris and then, in the 1930s, to the U.S. One of the first to recognize his talent was the legendary Gertrude Stein - she bought his Basket of Strawberries, which hung in her apartment next to her beloved Picasso. Both then in Paris and later the two were compared, and the comparison was not always to the Spanish artist's advantage. In America he was to find real fame - he created scenery and costumes for the ballets of Balanchine and painted portraits. Official recognition came with a one-man show at the Museum of Modern Art in 1942. 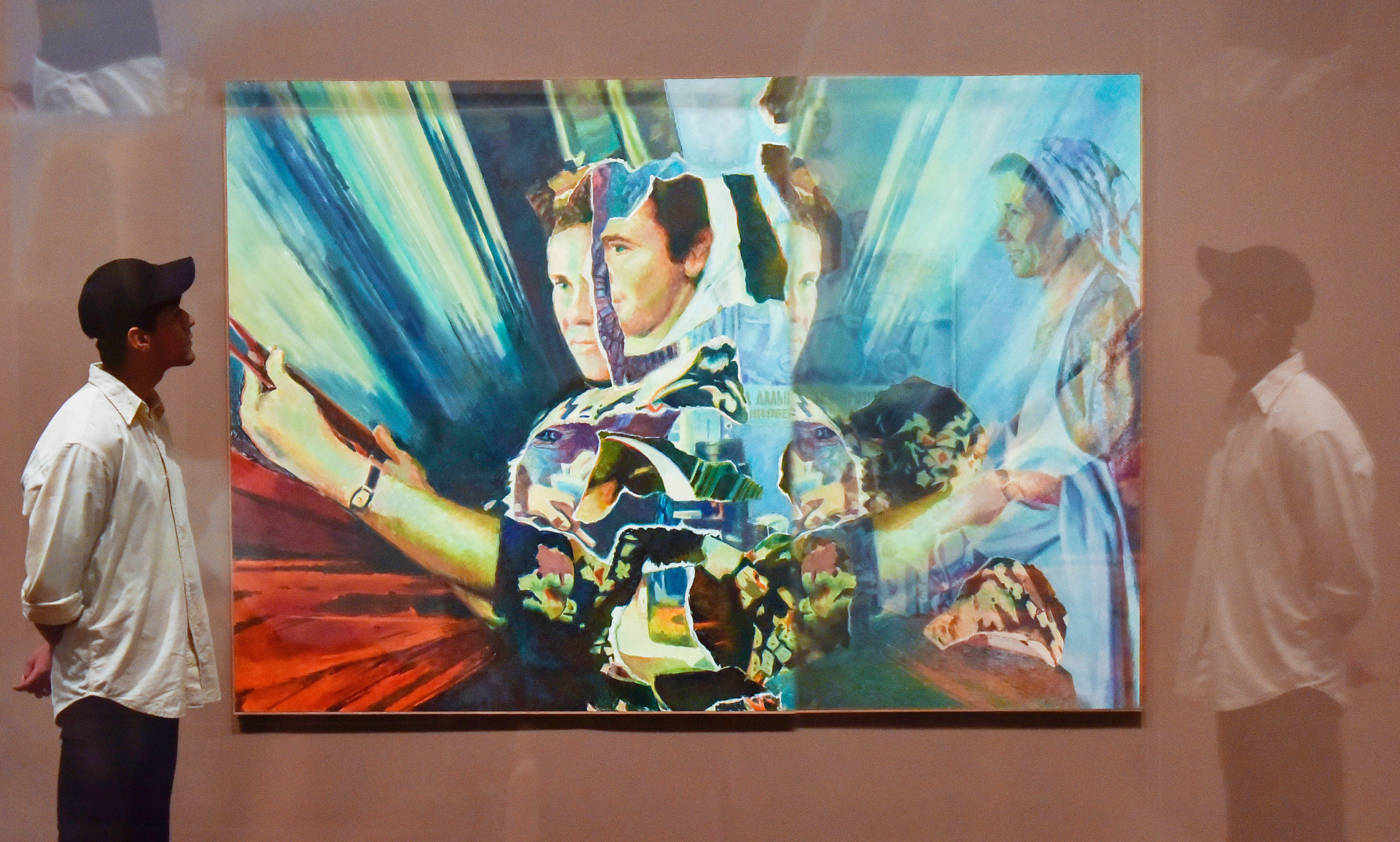 The chief representative of the Moscow Conceptualists and the most successful of the unofficial artists in the USSR, Kabakov managed to impart a universal human dimension, comprehensible and eagerly received throughout the world, to everyday Soviet living conditions and wholesale lack of freedom. He has lived in New York since the late 1980s, holding one-man shows throughout the world at venues including the Museum of Modern Art in New York, the Pompidou in Paris and Tate in London. 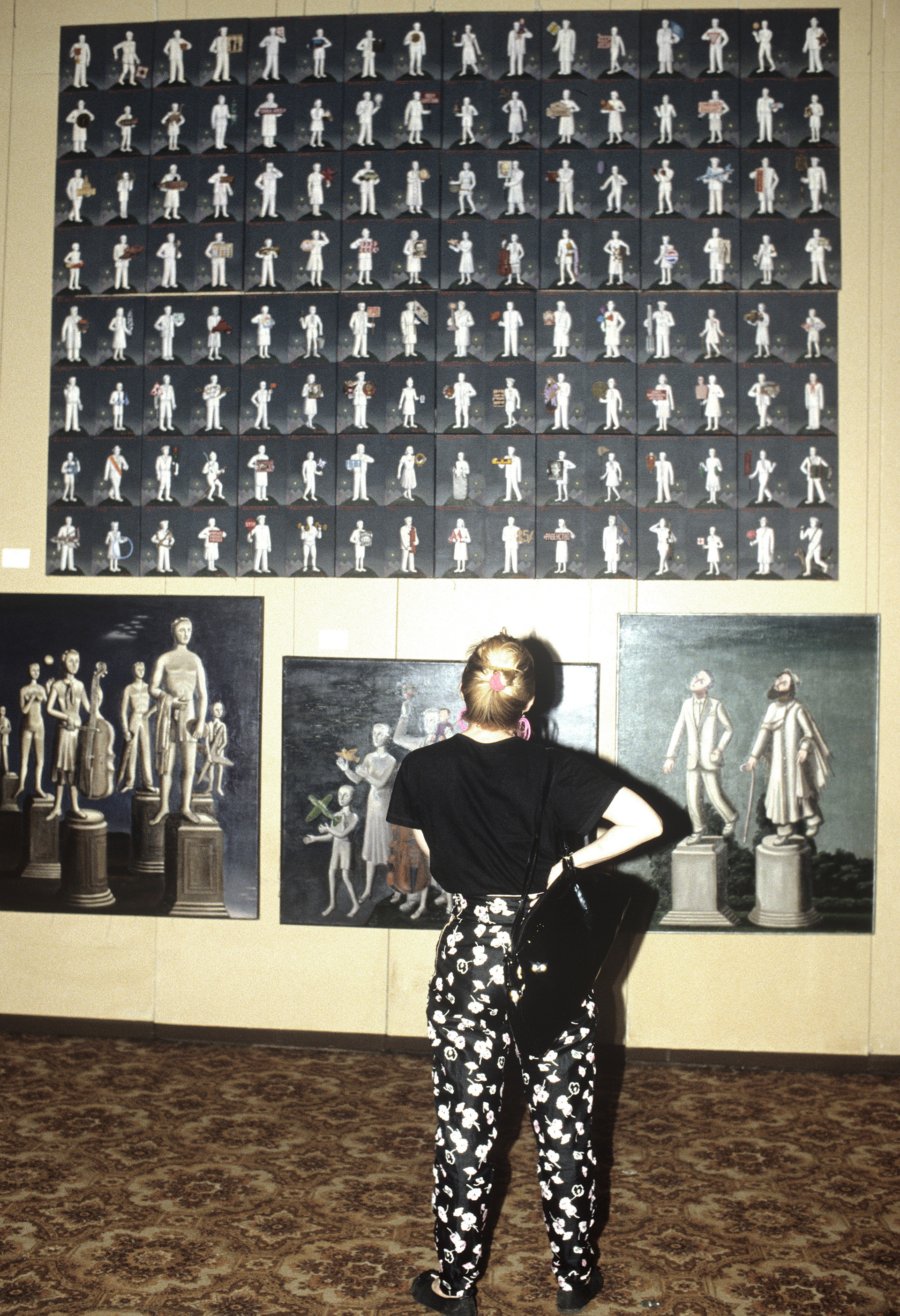 Worldwide fame came to Bruskin in literally a split second with the fall of an auctioneer's hammer. In 1988, at the one and only Sotheby's auction to be held in Moscow, his Fundamental Lexicon was sold for what was an unprecedented sum for Russian unofficial art - $416,000. The purchaser was the Oscar-winning film director Milos Forman. Two weeks later Bruskin was already in America, where, unlike the USSR, his exhibitions were not banned but, to the contrary, his work was actively exhibited. He then signed a contract with one of the giants of the art market, Marlborough Gallery, which continues to represent his interests to this day.