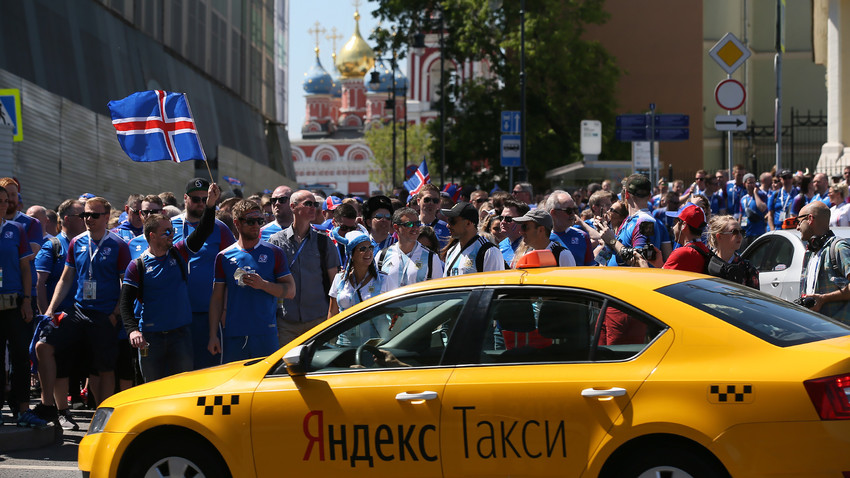 Icelandic football fans on their way from Moscow's Zaryadye Park

Alexander Shcherbak/TASS
Yandex Taxi must have heard the prayers of many tourists desperate to communicate better with their Russian hosts during the World Cup. The search giant finally decided to do something about the situation. At least as far as its taxi drivers are concerned.

And so, the company is happy to report that at least 12,000 of its taxis are now driven by drivers with a higher level of English competence than other companies and cities in Russia. It’s unclear whether football fans in Nizhny Novgorod or Kazan will feel the benefits, but Yandex reports that its Moscow drivers are now on average 59 percent more proficient than anywhere else in Russia.

The classes, courtesy of an online school, have armed them with the necessary basic phrases to ensure that the capital’s guests never again have to feel like they can’t communicate with their driver – and vice-versa.

On June 14, the day of the first World Cup meet, there was a 431 percent increase in cab orders at peak time, after the 21:00 match. It’s occasions like this, according to Yandex, which necessitate the new measures.

The search giant, in concert with the Skyeng online language school, is continuing to offer free classes to all drivers. They are reportedly quite comprehensive, and include written, audio, and video materials that play out the various scenarios the drivers normally encounter when carting around foreigners. These are all standard situations, of course.

The World Cup is currently on across Russia, and will last until July 15.