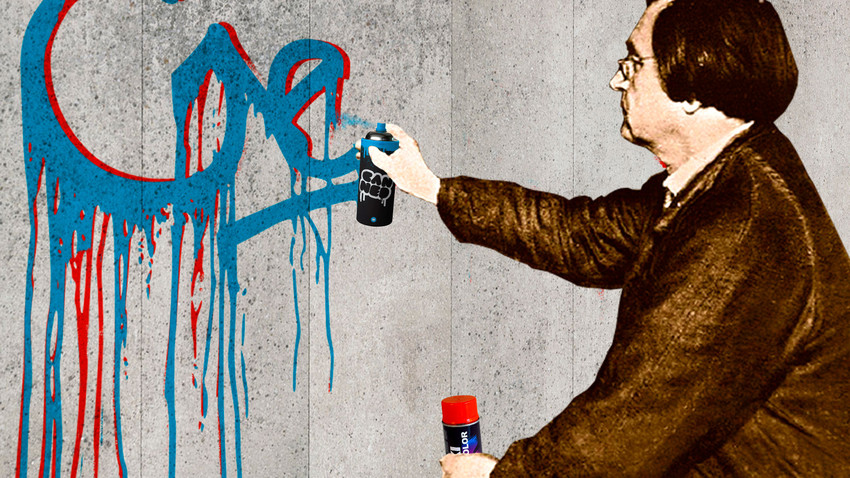 Alexander Kislov
The decade following the Bolshevik revolution was a time of artistic freedom because Soviet authorities welcomed the new creative movement as a way to destroy the old order.

The artist, activist, curator and urban art researcher, Igor Ponosov, has examined the power of street art in Russia by exploring its historical background, from the avant-garde movements of the early 20th to the non-conformists and the actionists of the 21st century. Russia Beyond is publishing an extract from his latest book, “Russian Urban Art: History and Conflicts.”

In the early 20th century, combatting academic stagnation, bourgeois art, and ‘museumification,’ Russian avant-gardists were among the first to proclaim the necessity of art to engage with the city. Art manifestos and decrees reflected their views on the ‘promulgation’ of bourgeois art through the movement of its objects into urban public space and their subsequent contextualization.

A manifesto 'Why We Paint Ourselves'

The first call for artists to come out into the streets was in public announcements made in 1912 by Ilya Zdanevich (Iliazd), proclaiming the worthlessness of contemporary art, and persuading artists to draw closer to the people and to engage in making outdoor posters and signs. Cautious attempts to insert art into everyday life were undertaken by the Futurists, by means of épatage, i.e. in a manner which violated accepted social or cultural norms.

In 1913, Ilya Zdanevich and Mikhail Larionov (1881–1964) produced a manifesto entitled, Why We Paint Ourselves, in which they announced their intention to paint their faces with bright colors. The artists named this action “the beginning of an invasion.” 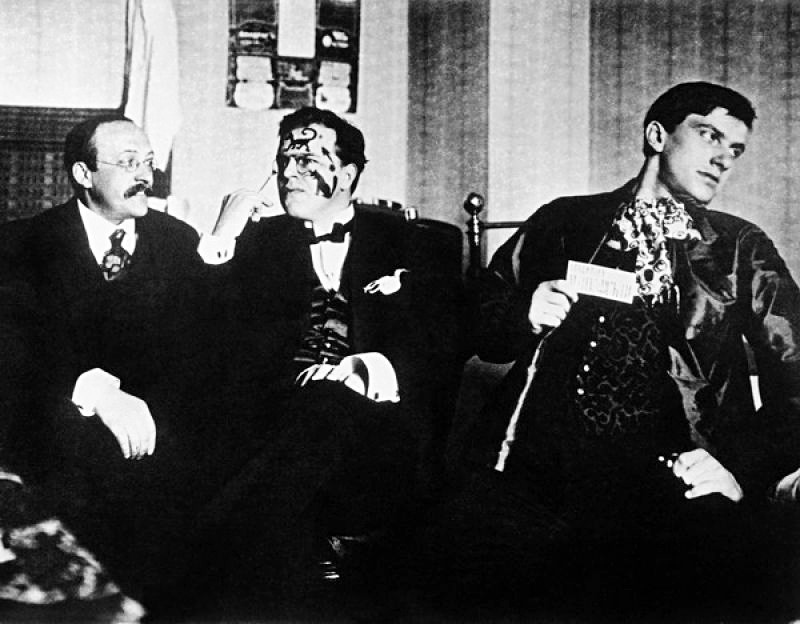 In 1914, Kazimir Malevich, together with Alexei Morgunov (1884–1935) and Ivan Kliun (1873–1943), organized a performance, a so-called ‘Futurist demonstration,’ in which the artists strolled down Kuznetsky Bridge with red wooden spoons in the buttonholes of their jackets, indicating their proximity to the people. In the artists’ view, these spoons were a symbol of the rapprochement between the artist and the people, rejecting elitism. In pre-revolutionary this gesture quickly became a media sensation.

From 1916–1918, on the eve of the October Revolution, there were discussions within the Futurist environment on the subject of ‘Fence painting and literature,’ and on the rethinking of art as such. Mikhail Matyushin (1861–1934), David Burliuk (1882–1967), Kazimir Malevich, Alexei Kruchenykh (1886–1968), Ilya Zdanevich, Vasily Kamensky (1884–1961), and others, were actively involved in these debates. ‘Fence painting and literature’ is a controversial lecture by Kazimir Malevich alongside other futurists.

The scandalous aspect of the event was the emphasis of the lecturers on the fence in literature and obscene painting, which at that time was associated with something sordid, for example, with insults and abuse. The futurists tried to create a path from elitism to the people, breaking the established rules of fine art. Campaigns encouraging people to take to the streets can also be traced through several poems by Vladimir Mayakovsky (1893–1930), who was also active in these discussions 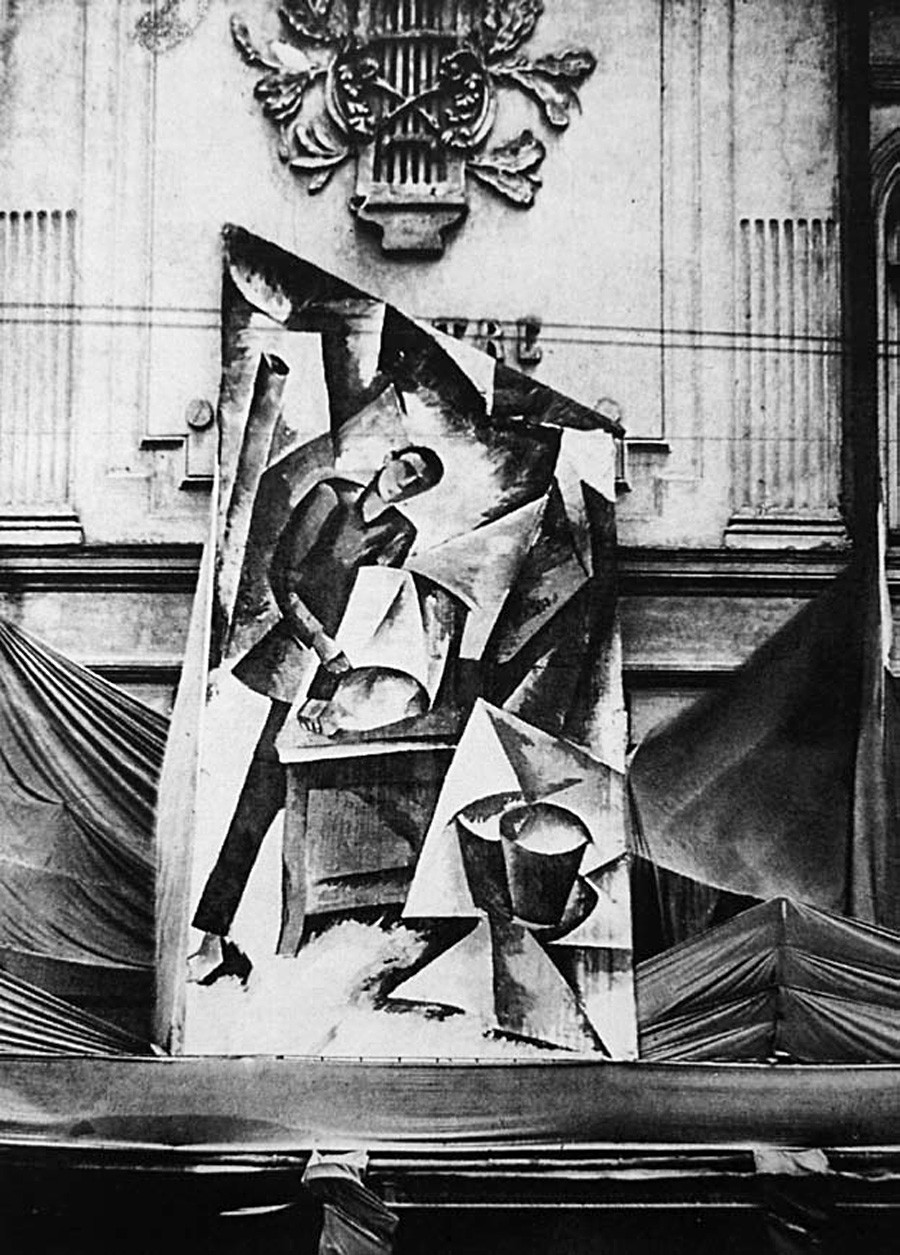 Alexander Osmerkin. Design for Moscow's Zimin Opera dedicated to the first anniversary of the October Revolution, 1918

most important vision of an art ‘invasion’ is the decree formulated in 1918 by a group of Russian Futurists, including Vladimir Mayakovsky, David Burliuk Vasily Kamensky. In decree No 1, ‘On the democratization of art,’ the artists stood up to “pick up paint pots, and with the brushes of one’s mastery illuminate, paint out all sides, foreheads, and chests of cities, train stations, and the ever-running flocks of rail wagons.”

The decree contains clear evidence of the call to create an artistic revolution in the art of the early 20th century: “From now on, may a citizen walking down the street enjoy every minute of the intensity of thoughts of great contemporaries, contemplate the flowery brightness of exquisite joy today, listen to the music – melodies, rumble and noise – of excellent composers everywhere.” 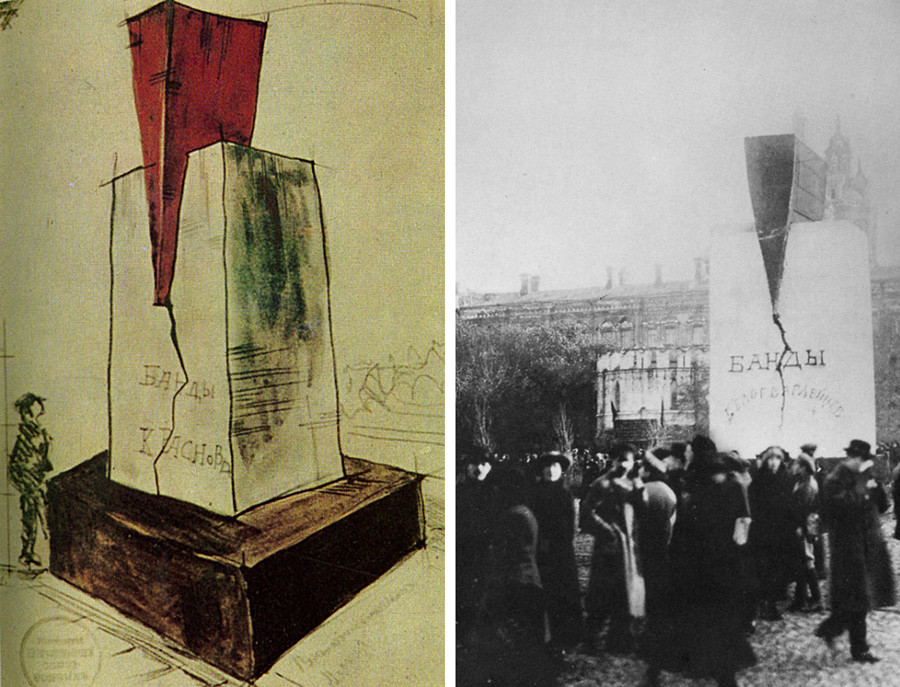 On the left: Nikolai Kolli. A sketch for the 'Red Wedge' architectural composition. On the right: "The Red Wedge" on Revolutsii square in Moscow, 1918.

“Let the streets be a place for everyone to celebrate art” — all of this is very much in tune with the events of October 1917, and the era of the reforms in Tsarist Russia. On this fertile ground of rejecting the existing system, we can say without a doubt that the Russian Futurists set the tone for contemporary art in a new socialist Russia, based primarily on legal equality and the elimination of elitism 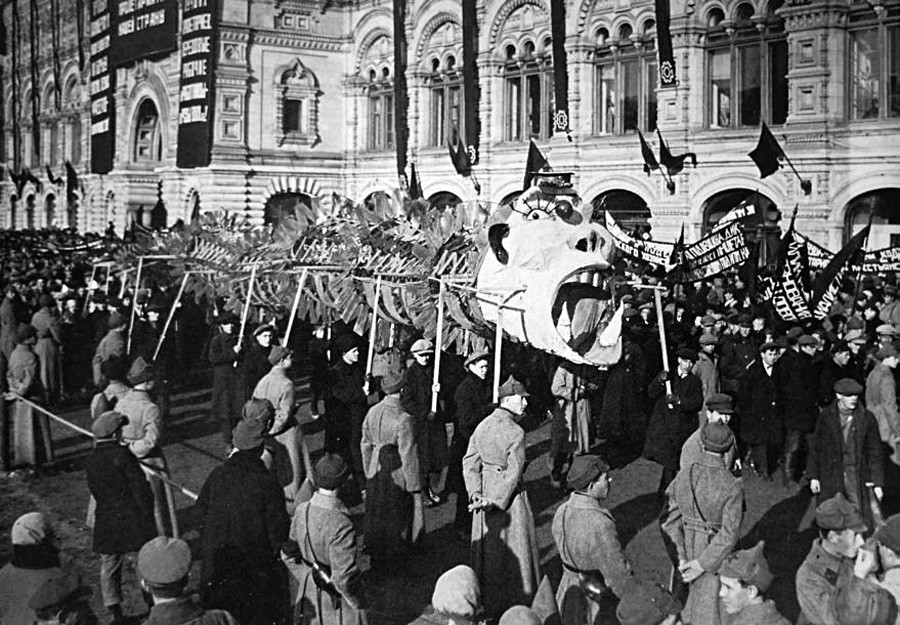 first actual attempts at reclaiming public spaces by various artistic trends were linked, to a great extent, to celebrations marking the anniversary of the October Revolution. Since 1918, there had been a festive atmosphere in Petrograd (Leningrad after 1924), and in Moscow 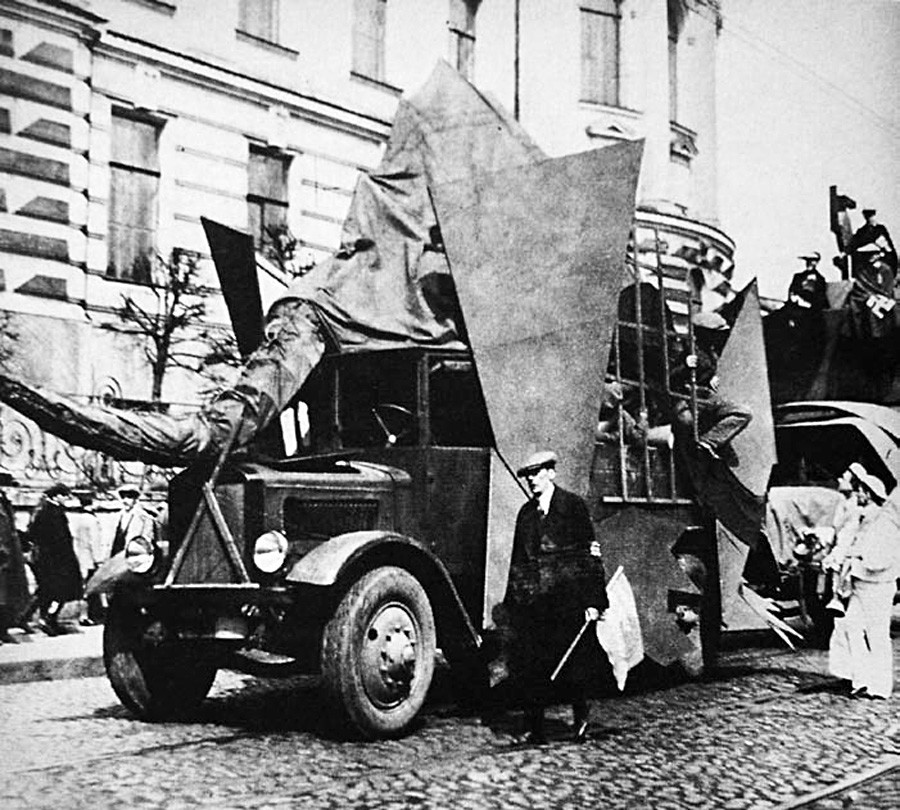 an official level, in April 1918, the Council of People’s Commissars enacted the decree, ‘On the Republic’s Monuments,’ which refers not only to the dismantling of the monuments of Imperial Russia, but also to the building of new ones, and to the mobilization of art forces for the purpose of the artistic decoration of the city for the annual May 1st celebrations 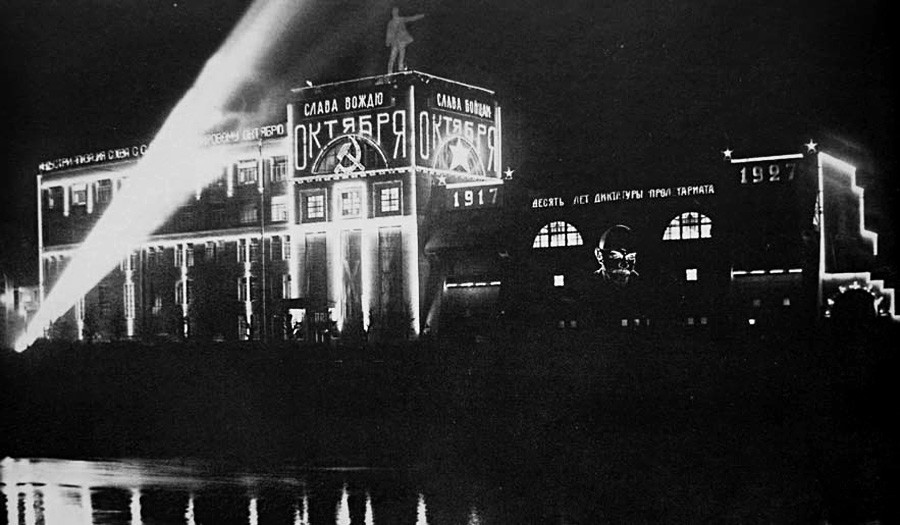 his notebook, the Soviet People’s Commissar, Lunacharsky(1875–1933), defends the Futurists and admires the first celebration of May 1st in Petrograd: “Per se, only the sharpness and power of the overall shape, as well as bright colors, were left from Cubism and Futurism, which was so necessary for outdoor paintings designed for the eyes of a giant audience of hundreds of thousands of heads.” 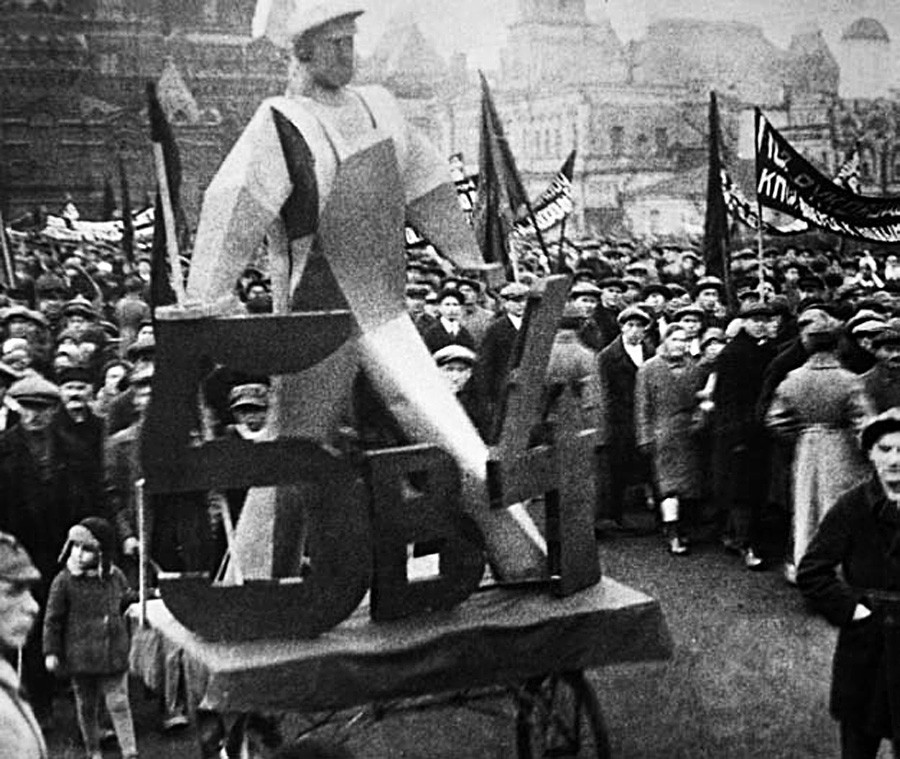 Initially, the revolutionary celebrations were reminiscent of military marches, with mock battles, displays of trophies and the people’s enemies, as represented by the bourgeoisie, religion, and 'traitors' of the revolution. In the first years of such celebrations, and up until the mid-1920s, demonstrations were based more on amateur and folk performances, than on engaging professional artists. 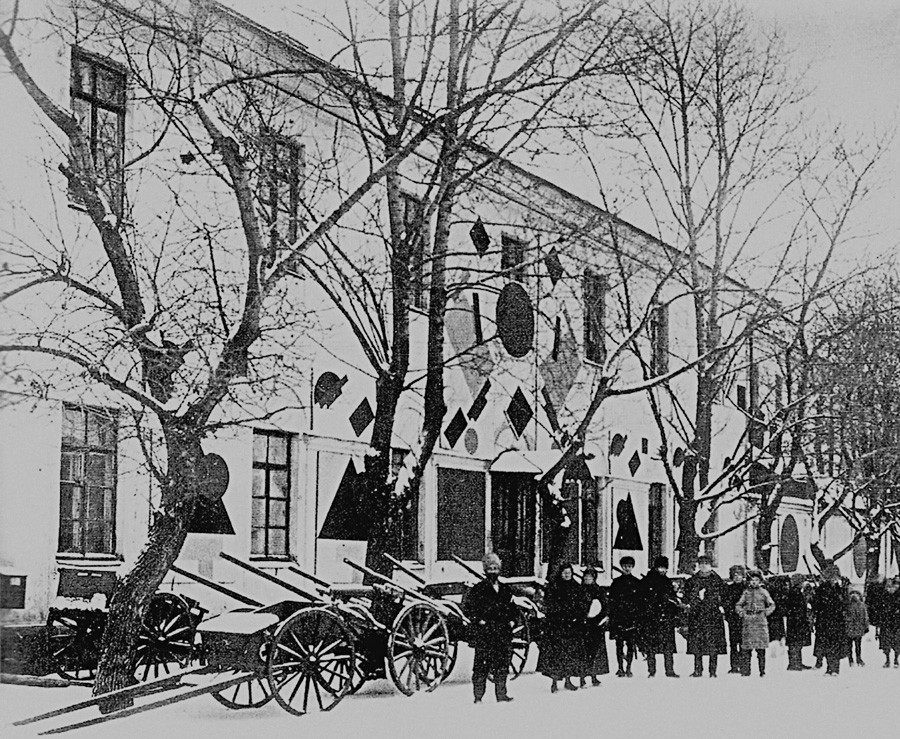 Decorating White barracks in Vitebsk by Malevich and students of the Art School, 1919

In 1918, this balance reflected the fact that May 1st was not just the date of the universal contemporary art showcase, or as the publicists of that time wrote, “The First Folk Exhibition,” but it was marked significantly by the involvement of the people in the production of art itself.