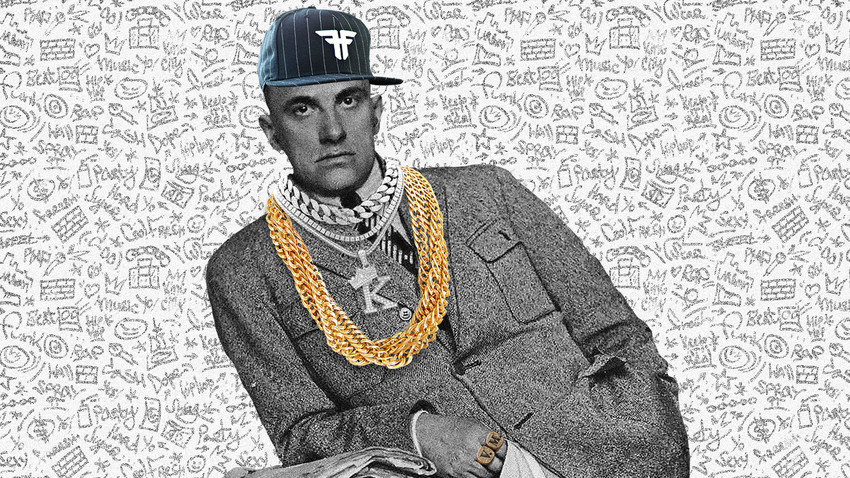 Vladimir Mayakovsky was a real hip-hop gangsta star. In a way.

Natalya Nosova
Russia’s culture minister called Mayakovsky “the first rapper.” Controversial as it sounds, the minister has a point.

Sure, Vladimir Mayakovsky was not a rapper at all. He didn’t know the technique (nobody did in the 1910s – 1920s) and never rapped while reading his poems out loud. But some facts make Culture Minister Vladimir Medinsky’s comparison sound logical. In a way, Mayakovsky could call himself a real gangsta.

1. His poems go well with rap

First things first: Mayakovsky’s poems are elementary to rap. His specific style includes interrupting sentences repeatedly, dividing them into short and sharp lines. They sound incredibly badass in Russian, but even the English translation helps to understand how rap-like Mayakovsky was.

(Excerpt from A Cloud in Trousers, translated by Andrey Kneller).

Medinsky is far from being the only one to call Mayakovsky “the first rapper.” MCs read out loud his lyrics in simple bits, and if you don’t know the source, it’s hard to distinguish between Mayakovsky and contemporary hip-hop. Sure, Russian hip-hop rarely is half as good lyrically. 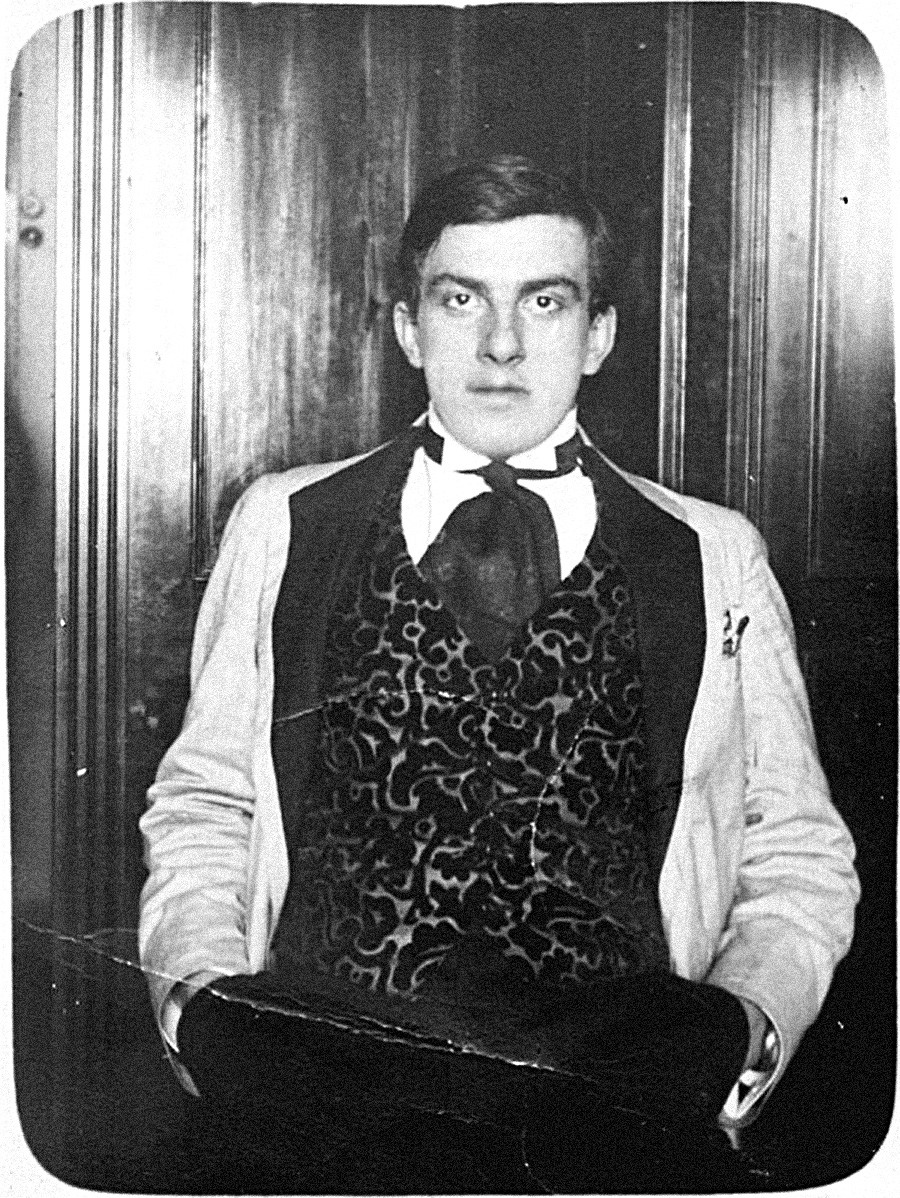 -hop often have troubles with the law, and so did Mayakovsky. A devoted socialist, he joined the revolutionary Bolshevik Party in 1908. For several months, Mayakovsky and his homies, I mean comrades, opposed the Tsarist regime in the streets of Moscow. For instance, they organized the biggest escape from a female prison in Russia’s history.

In Mayakovsky’s case, the law won. Police caught the young revolutionary and put him behind bars for 11 months. Only his young age saved him from a more severe punishment.

Those times were hard for the freedom-loving Mayakovsky, wrote his biographer Dmitry Bykov. “It was clear that he couldn’t stand the thought of going to jail again.” Subsequently, Mayakovsky opposed the Tsarist system, which he detested, only in his rhymes.

3. Had style and lived large 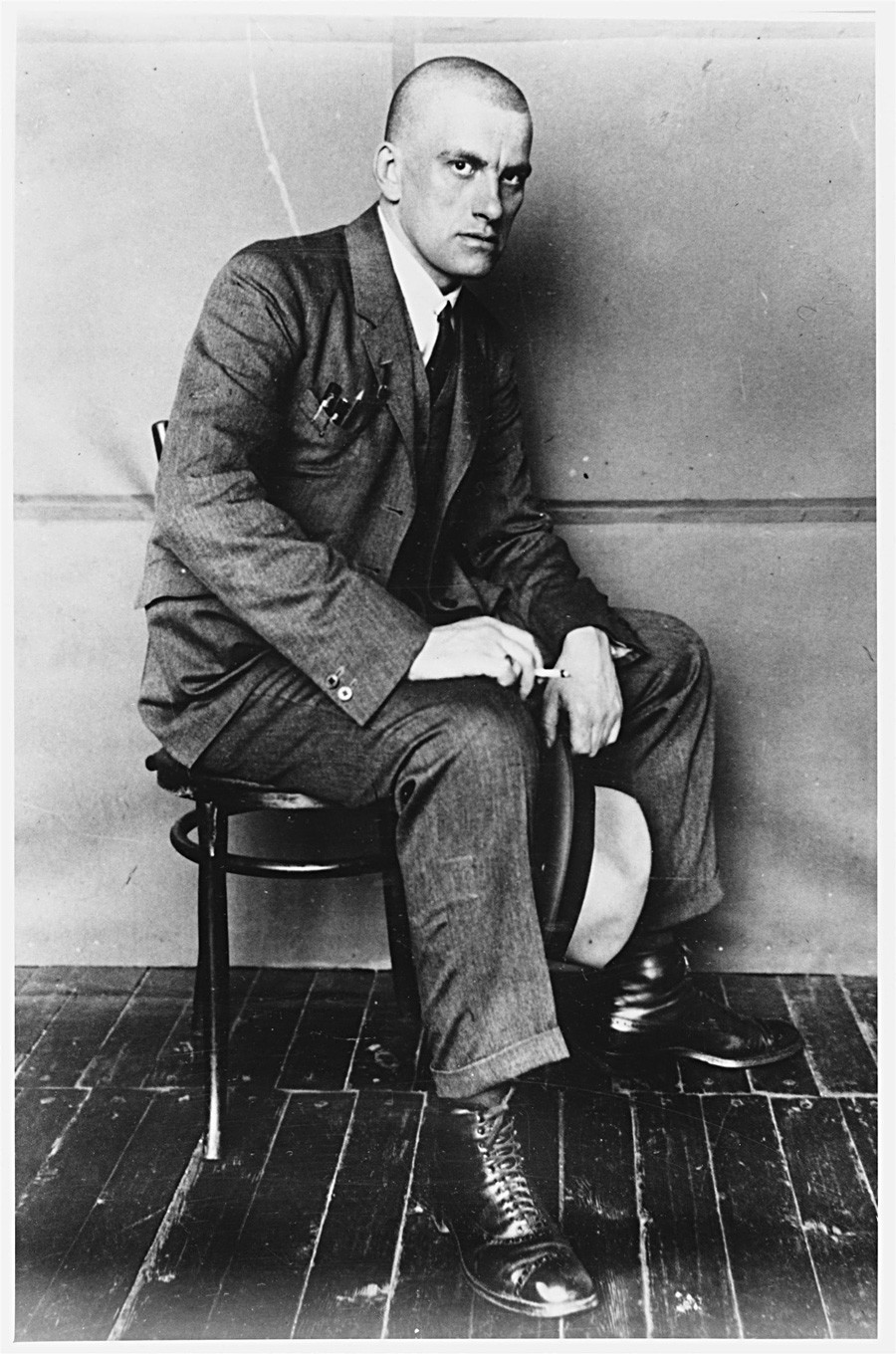 As far as fashion, young Mayakovsky was extravagant, and after joining the Futurist poets, he would dress in a self-made yellow blouse on stage, and mock the audience while reading his brand-new poems. Sometimes the bourgeoisie so mad with the poet’s mocking that they forced him from the stage. Doesn’t sound like hardcore stuff but it was in the 1910s.

“It was impossible not to love him,” his fellow poet Vasily Kaminsky recalled. “While on stage, he was always joking, putting bottles on his cylinder, pretending to be a ropewalker.” 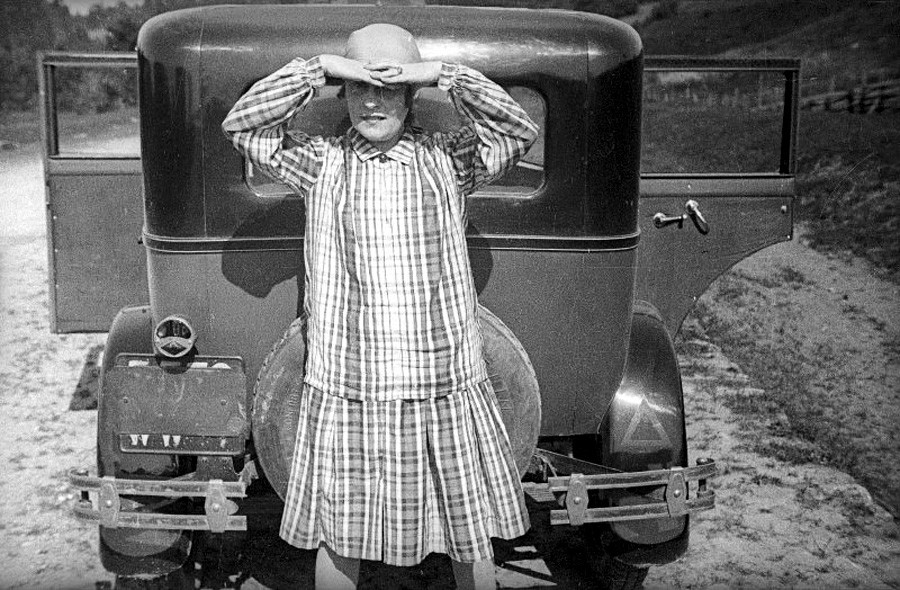 Lilya Brik near the automobile Mayakovsky gave her as a present, 1929.

With age, Mayakovsky changed his extravagant blouse to a suit, then to a working-class jacket, but he remained stylish and loved to spend money. In 1928, after traveling to France, he brought back a Renault for his long-time muse, Lilya Brik. This cost him a small fortune, but his love was the only Soviet woman in Moscow to have her own car.

4. Always was angry and dissed colleagues 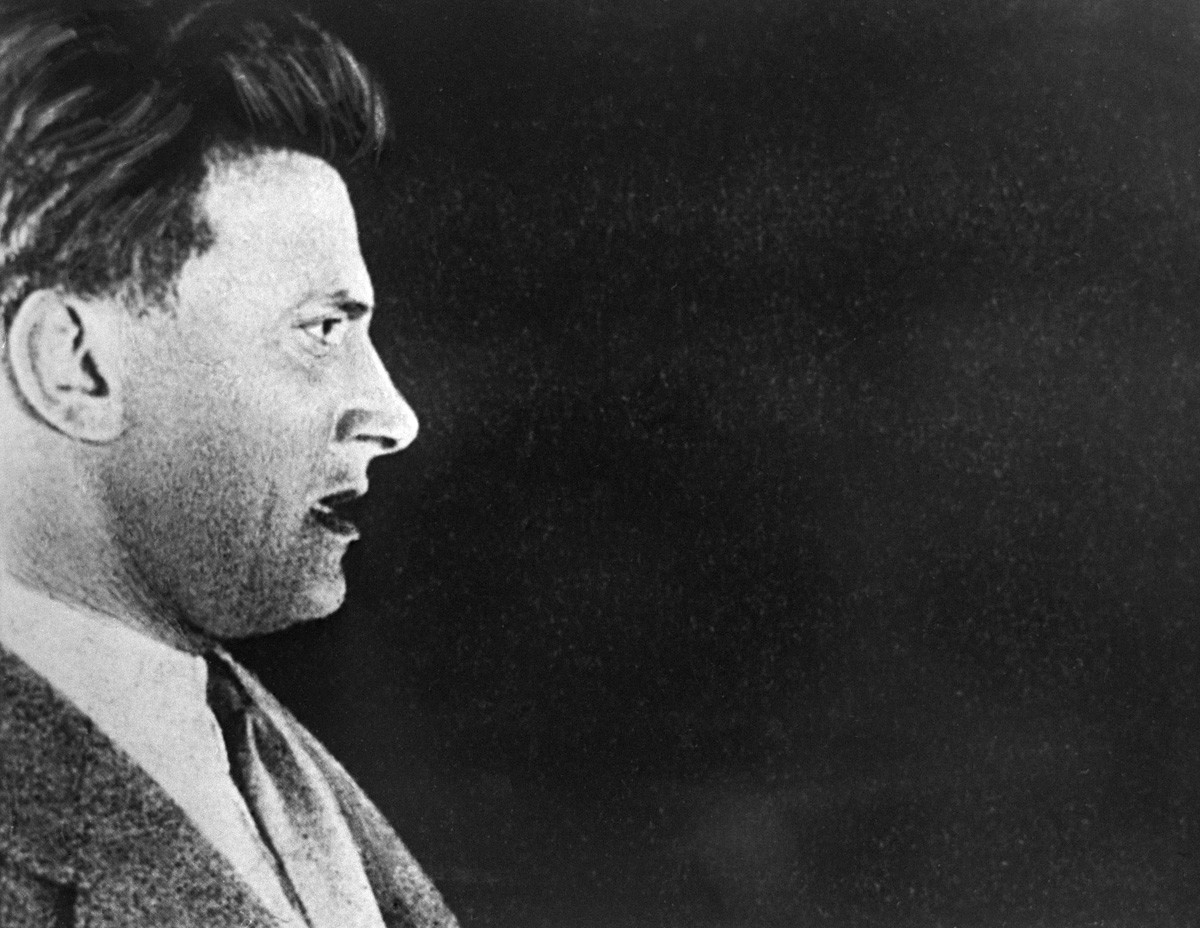 Mayakovsky’s early poems such as You (1915), which are ‘dedicated’ to the wealthy high-brow nullities that he disgusted, are so full of hate that you could mistake it for Eminem’s latest album:

To give up my life for the likes of you,
lovers of , dinners and cars?
I’d rather go and serve pineapple juice
to the whores in Moscow bars!

After the 1917 October Revolution, as a devoted Bolshevik, Mayakovsky sounded a bit happier, but at heart he remained angry, turning his hate towards world capitalism. He continued to diss those poets whose works he considered “classless,” or just bad; especially Sergey Yesenin, the other major poet of the 1920s, and who was rural-rooted and patriotic. Mayakovsky called him “a balalaika player,” and mocked his poems. 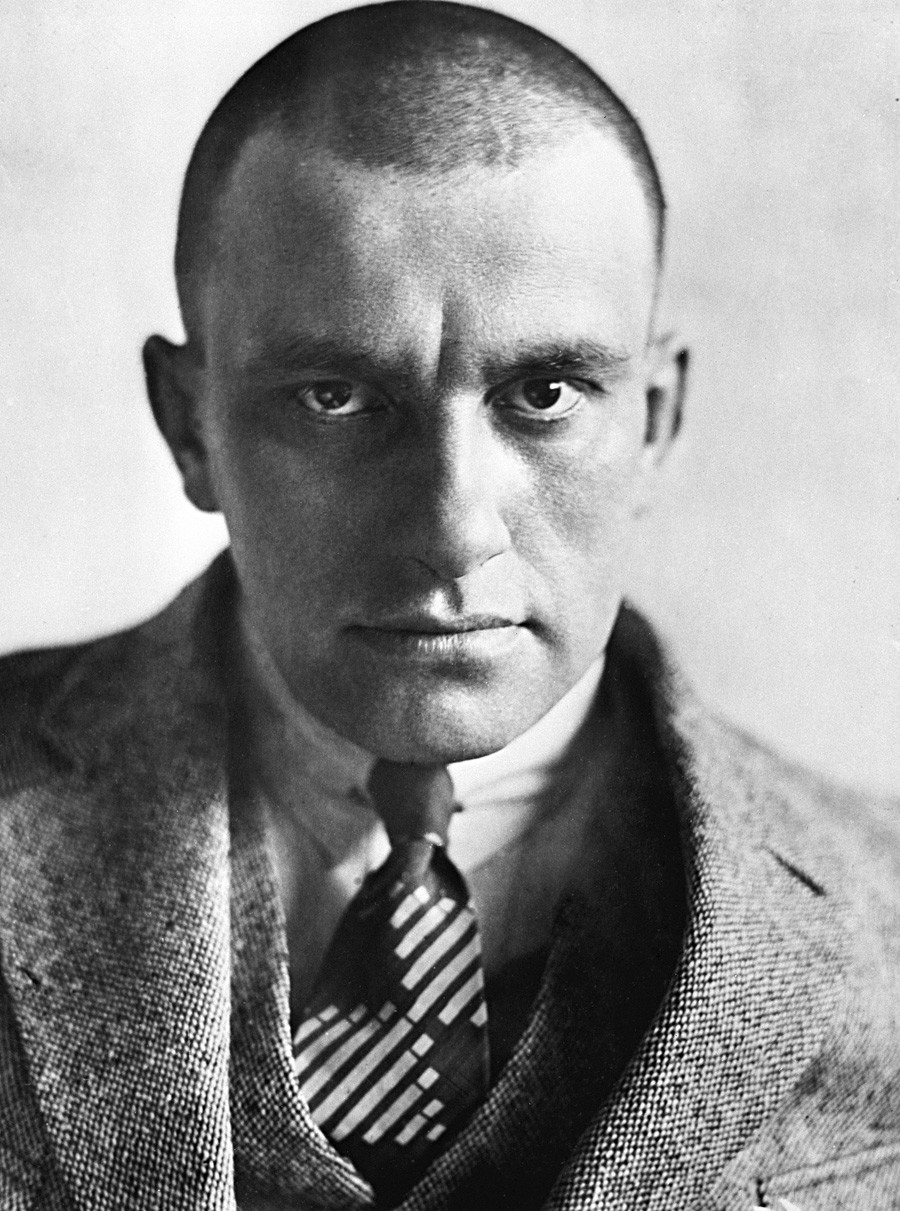 Several American hip-hop heroes, namely Tupac Shakur or Notorious B.I.G., were shot in gang turf wars. Mayakovsky shot himself in 1930, as a result of a long-lasting ‘war’ with himself. For years, his of the revolution and socialist future contradicted with Soviet reality, which became increasingly bureaucratized and oppressive. Mayakovsky tried to fit into the new, Stalinist society but failed.

“For 12 years straight [following the 1917 Revolution], Mayakovsky the man was killing Mayakovsky the poet inside himself,” poet Marina Tsvetaeva wrote in her memoirs. “In the last year, the poet rose and killed the man.”

Tragedy ends the lives of many creative geniuses, be they hip-hop, rock or any other style.

Hip-hop or not, Russian literature contains endless treasures. Just read this short list of pearls of wisdom by Leo Tolstoy, Feodor Dostoevsky, and Anton Chekhov - and your life might become easier.