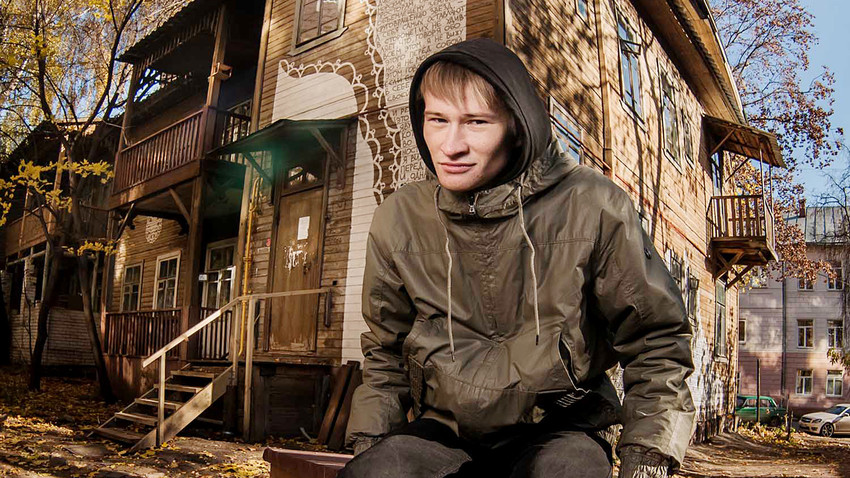 Valeriy Shibanov
Not so long ago, street art in Russia was frowned upon as something teenage delinquents might engage in. But today, residents of provincial Russian cities are themselves campaigning for an artistic tune-up to their architecture.

Artem Filatov is 27, and he yearns to save his hometown of Nizhny Novgorod, a large industrial city 600 km east of Moscow. No, not the fresh and spruced up Nizhny we saw during the World Cup, with its immaculate postcard views enjoyed by thousands of foreign visitors. The Nizhny Filatov wants to save is the forsaken kind - the one you see once you turn a street corner into an alleyway. There, a stone’s throw from all the hustle and bustle of the mainstream, hide tiny wooden houses, snidely referred to as “” or “” (from the words “rotten” or “dilapidated”). But it is there that Artem finds Nizhny’s true beauty 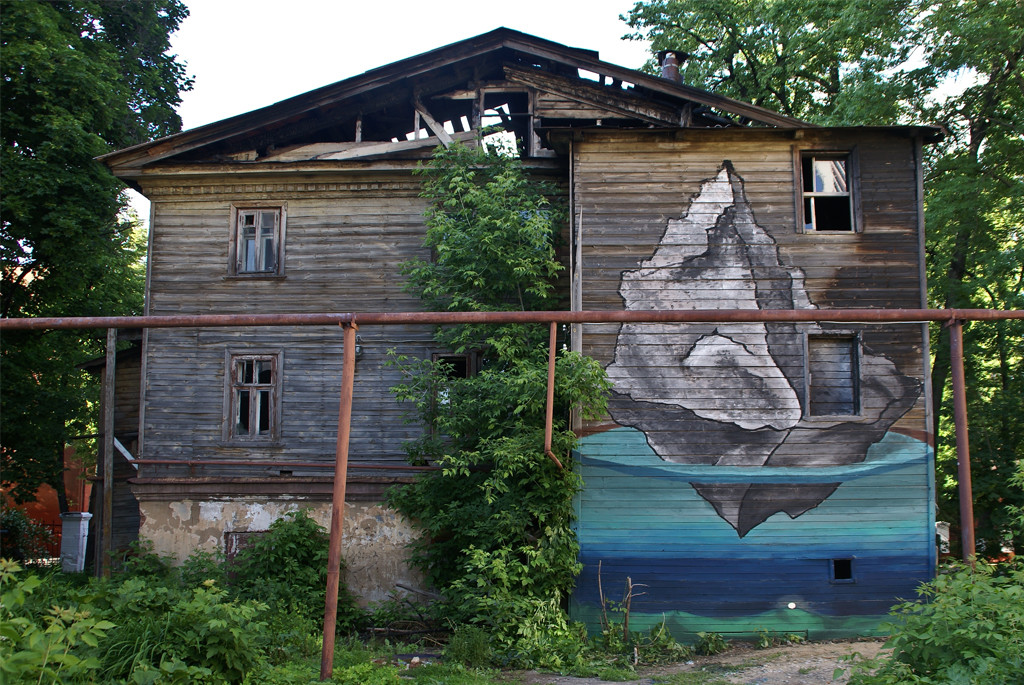 have already been abandoned or burnt to the ground, but many can still be rescued. Artem wanted people to change their outlook on all things rustic, to exhibit a newfound curiosity for the rundown streets and architecture that emerge as soon as you turn a corner. The hope is also that putting rustic Nizhny under a fresh light might help avert redevelopment in those areas (a topic frequently affecting Russians) 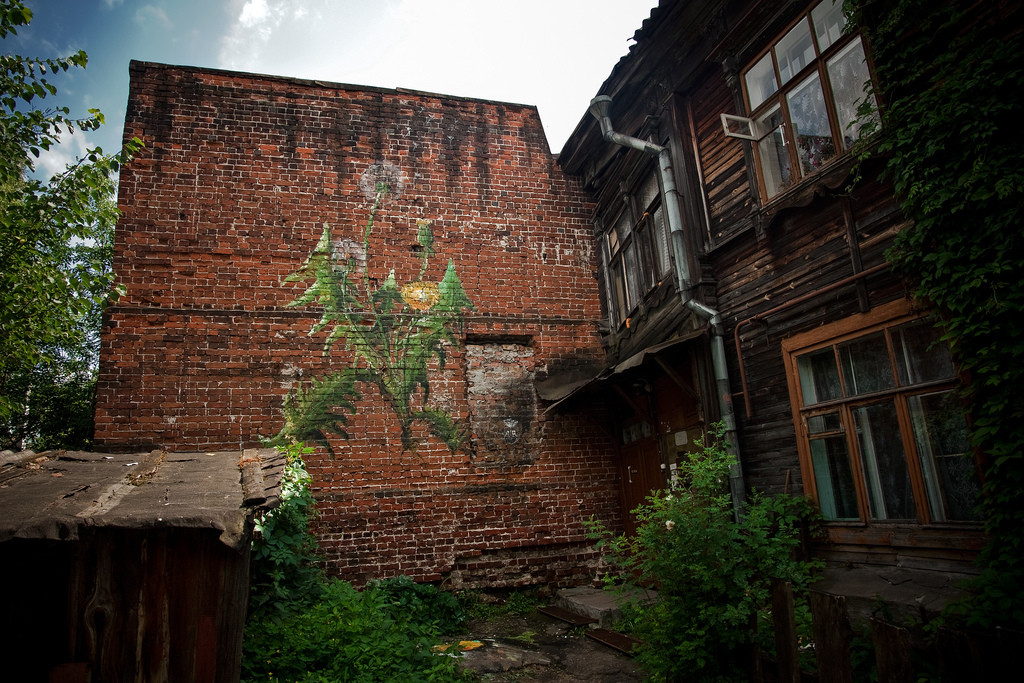 first, Artem tried to single-handedly mount an effort to change people's “mental map” of Nizhny Novgorod, as he puts it: since 2011 he has been painting over abandoned or burnt-down houses, which do not require a permit to work on. Then he graduated to habitable buildings, asking tenants for permission. He always searched for exotic solutions, then finally decided that a sociocultural approach was required. As luck would have it, an opportunity presented itself

It all started with a street art festival Artem set up with the help of a non-profit organization he’d worked with. The country’s best artists descended on Nizhny Novgorod to give its old buildings a classical renewal. To Artem’s surprise, a very large number of Nizhny dwellers answered the call. As it turns out, they didn’t share the city’s view that the buildings were in disrepair and, on the contrary, wanted to preserve history while proudly presenting the new creations as alternate landmarks 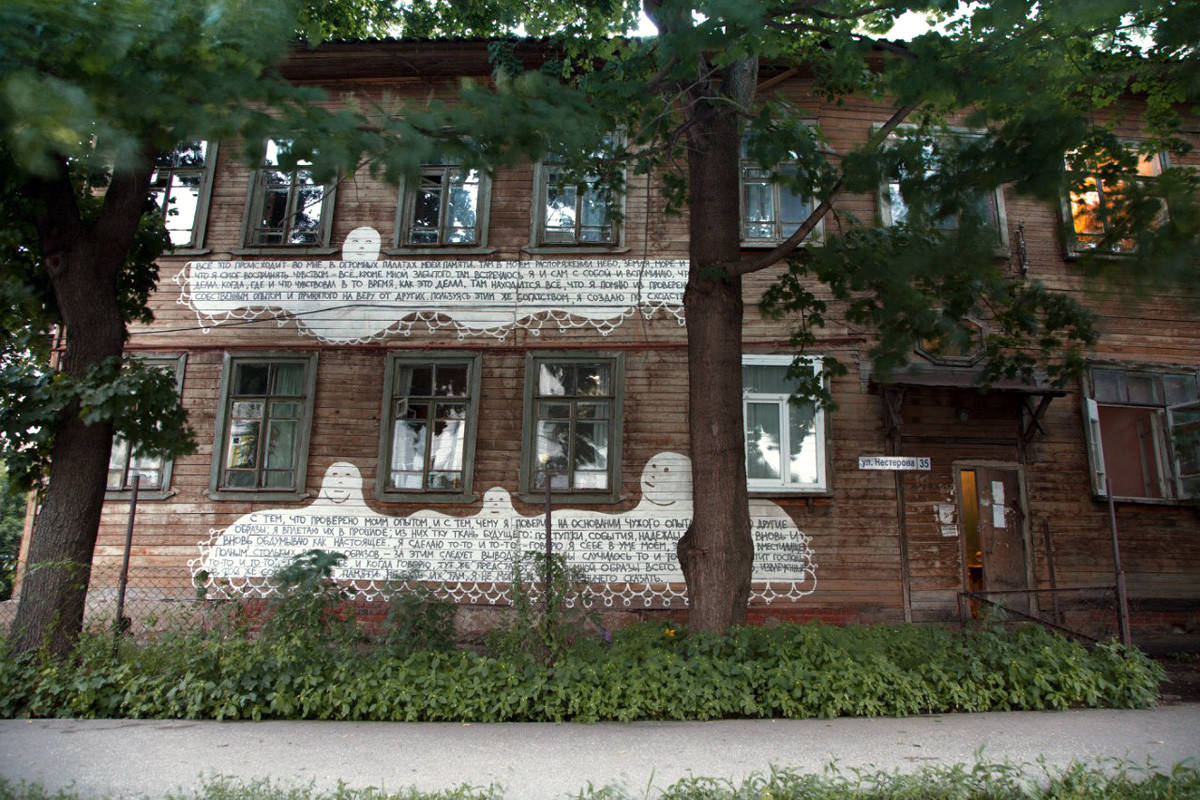 Collaboration of street artists Timofej Radya from Yekaterinburg and Stas Dobry from Moscow 'Laces of memory,' 2015

Organizers would have to meet with tenants individually to obtain permits.

“When I was born in 1943, I was brought home and laid on that bed,” Tatyana Rukavishnikova-Novikova, a resident, told the organizers. “My whole life I’ve slept and loved - if you will - here. The lives of my friends and neighbors are, likewise, tied to this building. It would be impossible to part with it.” 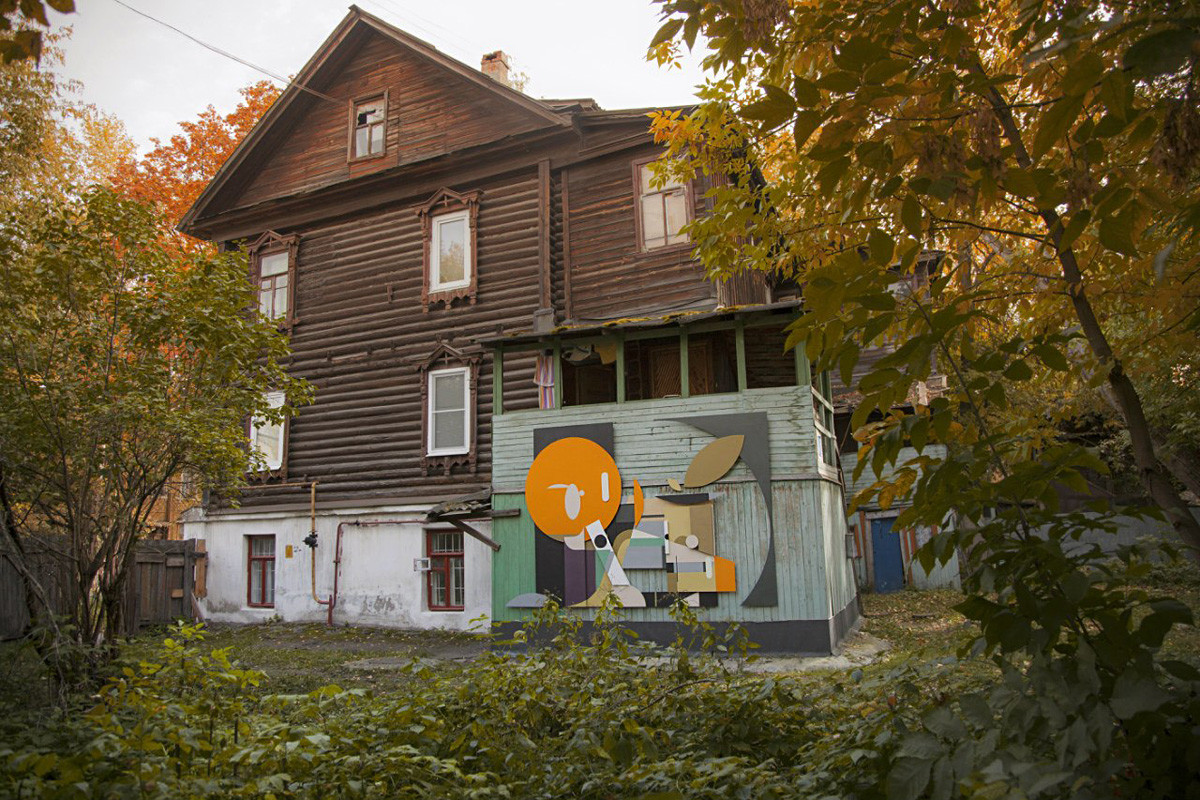 Another tenant, Yury Kulikov, said that “My home is the brightest thing in my life. I even used to get nightmares that I lost my way and couldn’t find it.” 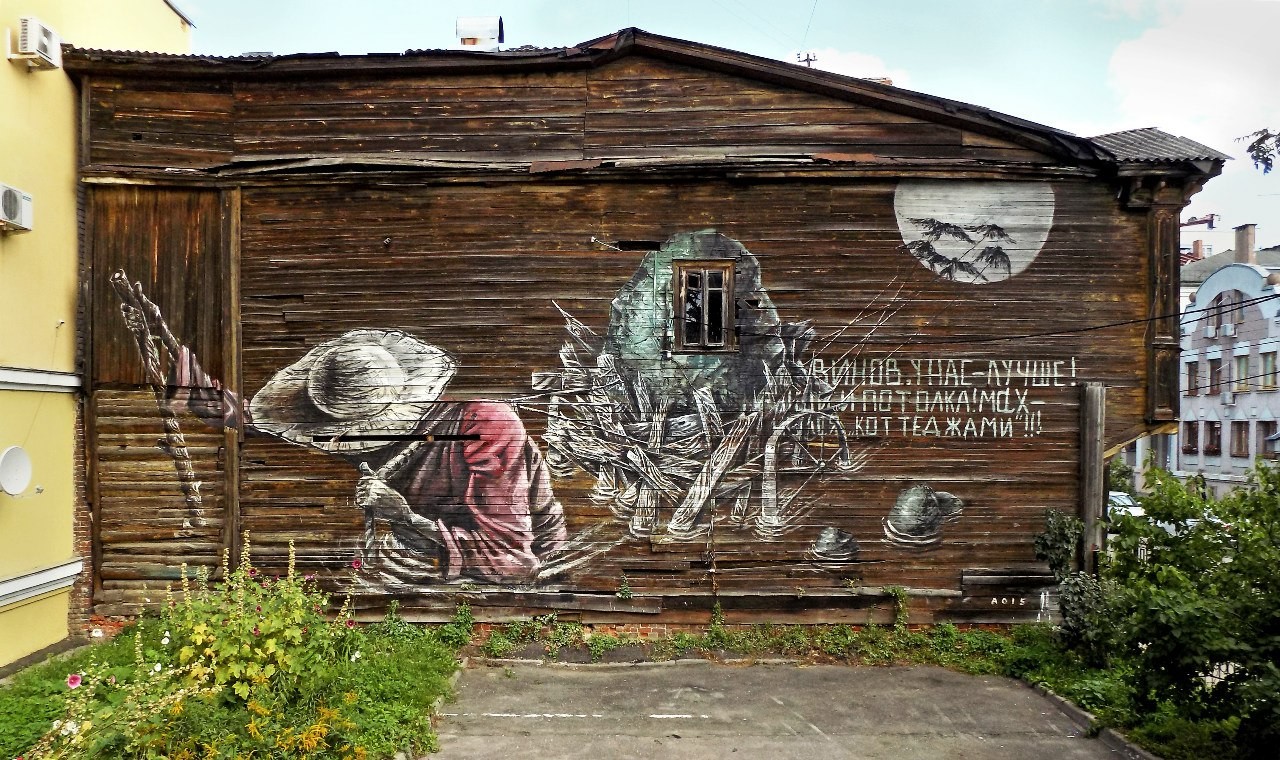 The fact that these residents happened to be really politically active was a huge help to Artem in overcoming bureaucratic hurdles and ensuring that everything was according to law.

Artem had decided to go further than transforming select houses. Having found a rundown wooden house downtown - which used to belong to the Nizhny Novgorod Intelligentsia Museum - he set about returning it to life. “The building was abandoned, there wasn’t even power,” he remembers 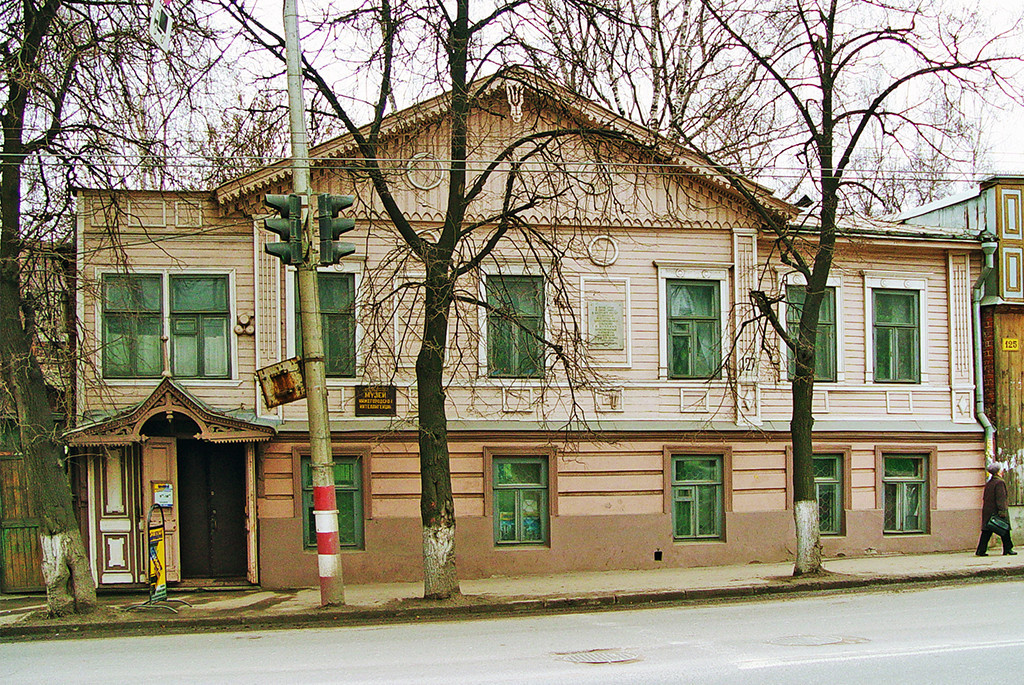 hard work Artem managed to hook the old building up to a phone line and the power grid, returning it to its former glory. What fueled Artem was the idea that he might repurpose the old museum as an art space for his works, as well as a public discussion forum.

The exhibit, titled “Back Home”, dealt precisely with the issue of reconceptualizing old urban spaces. It was a huge success, even earning a large prize for “Innovation” as the best regional project of 2017 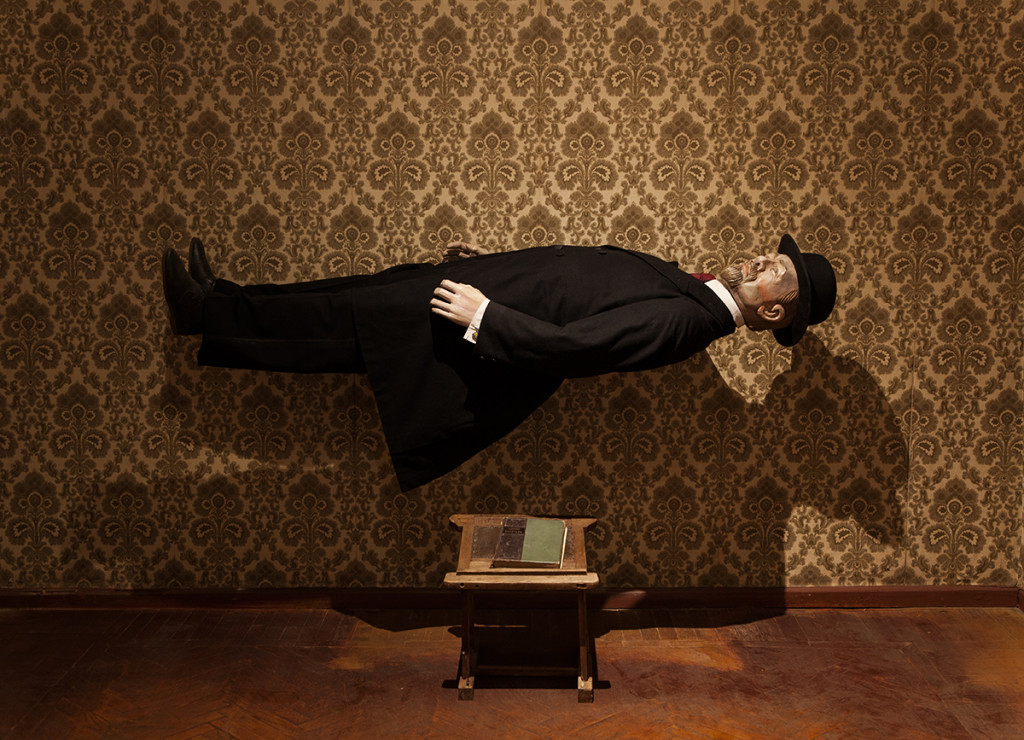 this cost Artem a lot as he fought to save the building. During preparations for World Cup 2018, as the city was being refreshed, the old building was to be covered up with a banner (being a cultural heritage object, painting over it was out of the question, and the building required a specific type of technological renovation in line with regulations). Artem managed to successfully prevent this, and the building retained its classical style 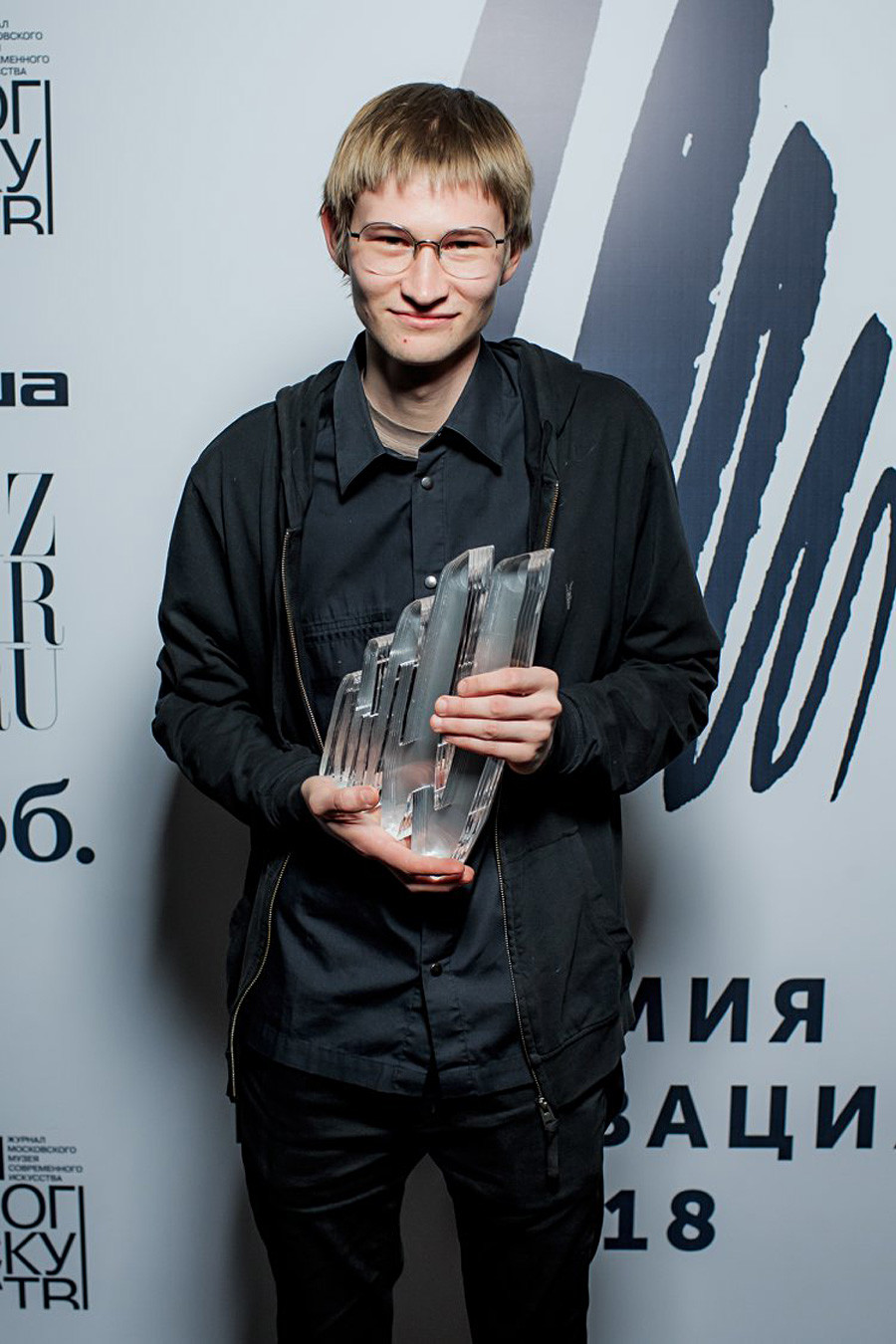 recently, the city did not show much support or acknowledgment for Artem’s creative projects, nor took active part in them. However, the new mayor and governor have recently voiced plans for a citywide redevelopment of historical landmarks. Artem hopes the promises will be kept.

An exhibit at the crematorium

At present, Artem is fully taken up with preparations for an upcoming exhibit at an unusual place - the new private crematorium in town. Part of that involved seriously researching cremation.

“I proposed an exhibition that would tackle the subject of the final send-off, how a person is remembered and how the results of their life are summarized. It’s a good chance to touch on this often taboo subject,” Artem believes.