Culture
Alexandra Guzeva
While acclaimed American performance artist Marina Abramovic was exploring her own body, Russian contemporary artists were doing insane things that she couldn't even dream of.

Artistic events in Russia, unlike many other countries, often reflect the reactions of artists to social and political events. Provocative and at times unlawful, radical performances are often a preferred form of expression. Frequently such actions end in arrests and/or criminal cases. Let's look back at the most outrageous moments in Russia's post-1991 art history. 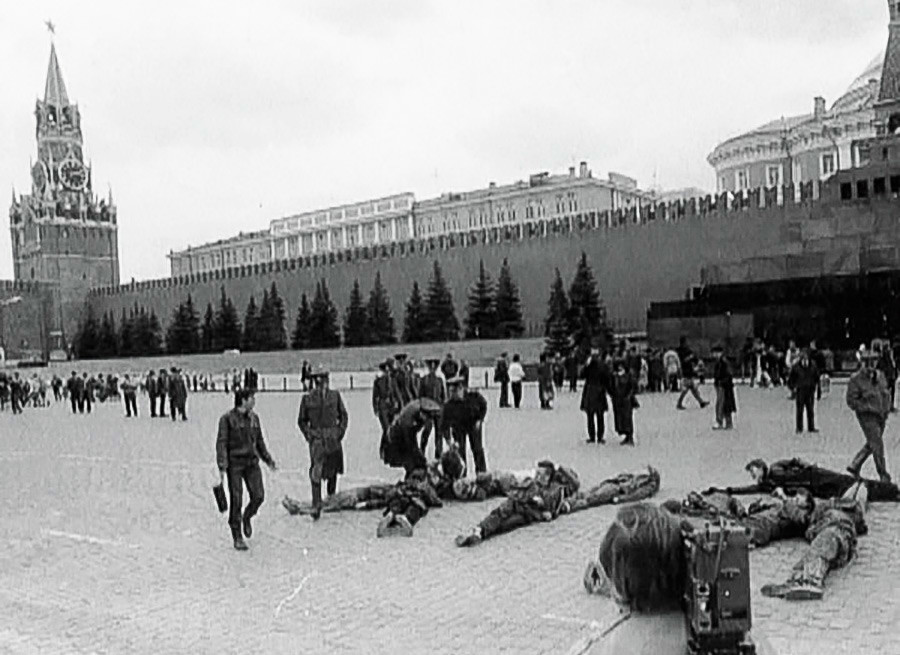 In 1991, young artists from the ETI movement (Russian abbreviation for "Expropriation of the Territory of Art") staged an action they named, "ETI-text on Red Square," in protest against the enforcement of a ban on swearing in public places. On April 18, they laid down on the square, their bodies forming a three-letter word that's the most widespread expletive. The action lasted about a minute before police took everyone to the police station, but soon letting them go.

Anatoly Osmolovsky, one of the founders of Moscow Actionism in the 1990s, was behind the protest, and he was charged with malicious hooliganism. The case never went to court, and was closed due to a lack of evidence of a crime. 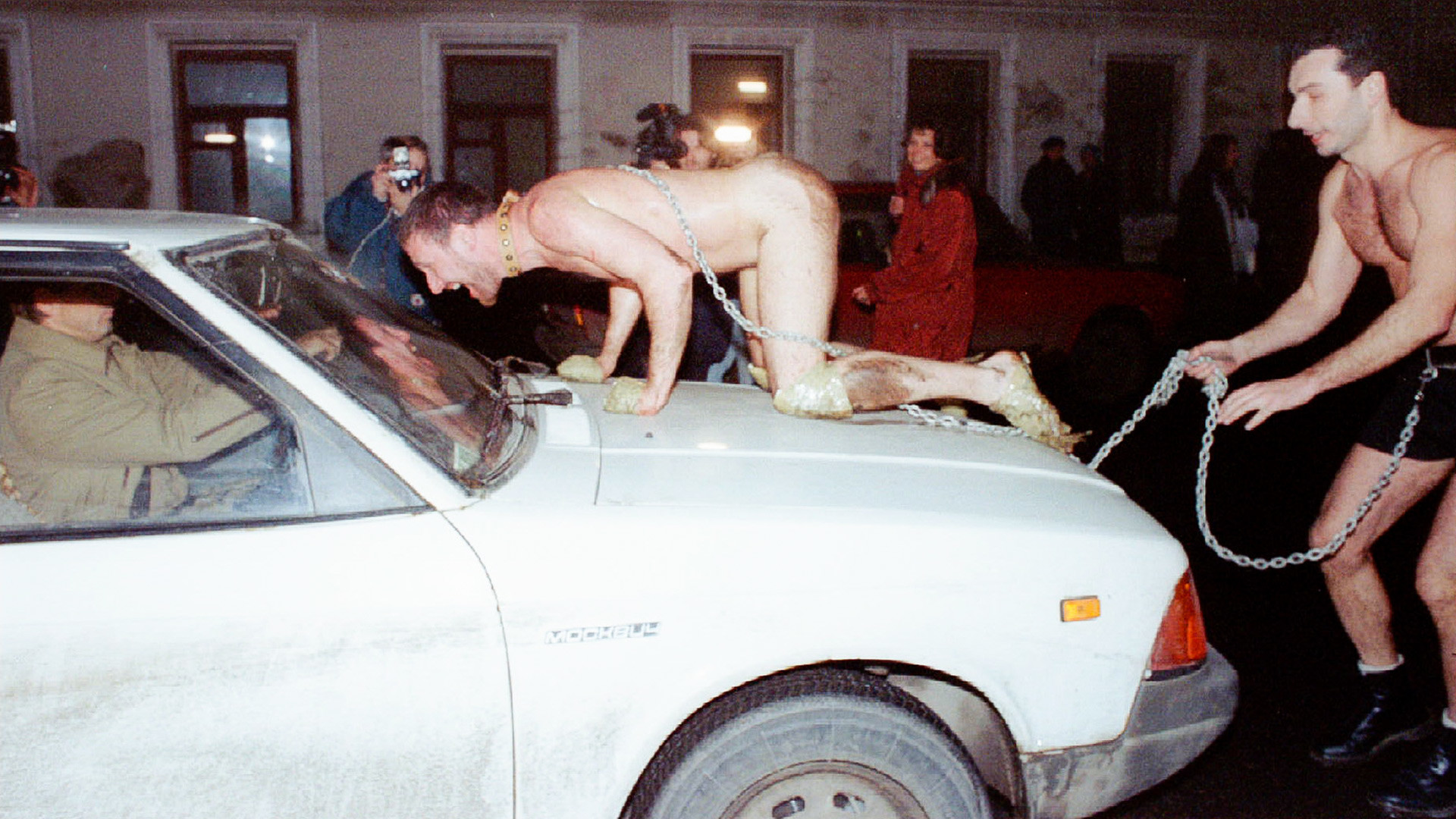 Russian artist Oleg Kulik imitating a dog jumps on the car of a scared Muscovite as Alexander Brener, representing his owner, tries to hold him back

Oleg Kulik started as an art director and artist at privately-owned Regina Gallery in Moscow. After he decided to leave, he had no source of income. In one interview he jokingly recalls how he crawled up to Marat Guelman and offered to guard the entrance to his gallery, promising to be as loyal as a guard dog.

This is how in 1994 Kulik came up with his first performance, "Mad Dog." The naked artist took on the persona of a dog and attacked people. Another action artist, Alexander Brener, led him on a leash.

The dog-man image became firmly associated with Kulik over the next 20 years. He repeated the action in Zurich, where he tried to scare spectators away from an exhibition of paintings by Niko Pirosmani. In 1997, he reached New York where he staged an action titled, "Bite America and America Bites Me." 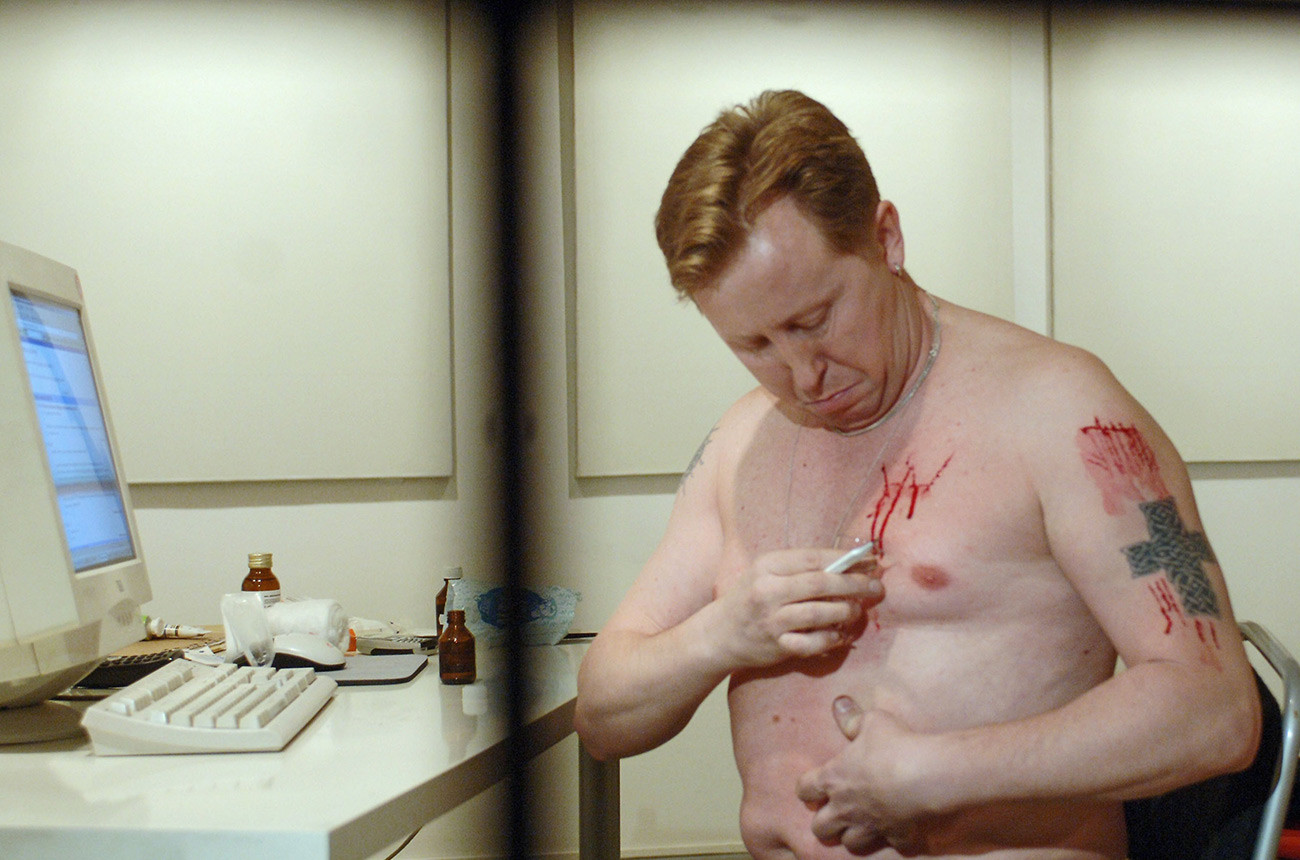 As the artist claimed, no one in Russia previously did something like this. The year was 1995, and the venue was the Fili Refrigeration Plant at the opening of the Ice Cream Art exhibition. Emperor VAVA (pseudonym of Vladimir Alexandrov) sat in the lobby, carving a crown on his chest with a scalpel. Then he collected his blood with an ice cream, placed the "dessert" on a tray and invited spectators to taste it.

"During my performance dozens of cameras wouldn’t stop flashing (incidentally, I don't recall seeing so many of them ever again)," the artist wrote in his LiveJournal blog in 2009.

4. Invitation for Boris Yelstin to fight 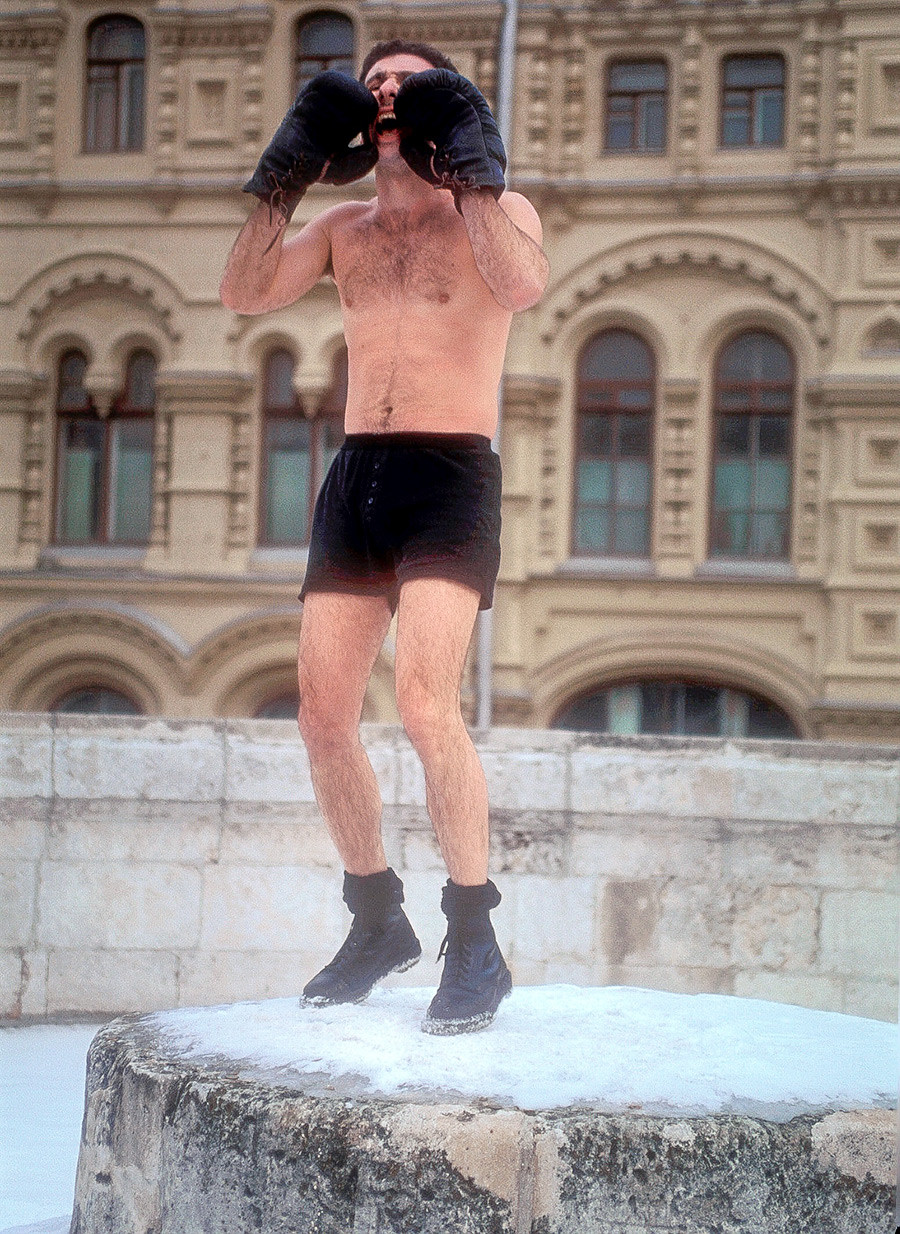 In 1995, the above-mentioned performance artist Alexander Brener decided to challenge President Boris Yeltsin to a fight. On a frosty day in February, Brener came to Red Square wearing boxing gloves and shorts, and started chanting, "Yeltsin, come out!"

The action went down in history under the name, "First Glove," and was a protest against Russian troops sent to the rebellious Republic of Chechnya on Yeltsin's orders.

Art gallery owner Marat Guelman recalls that the police detained the "boxer" half an hour later, but quickly let him go. 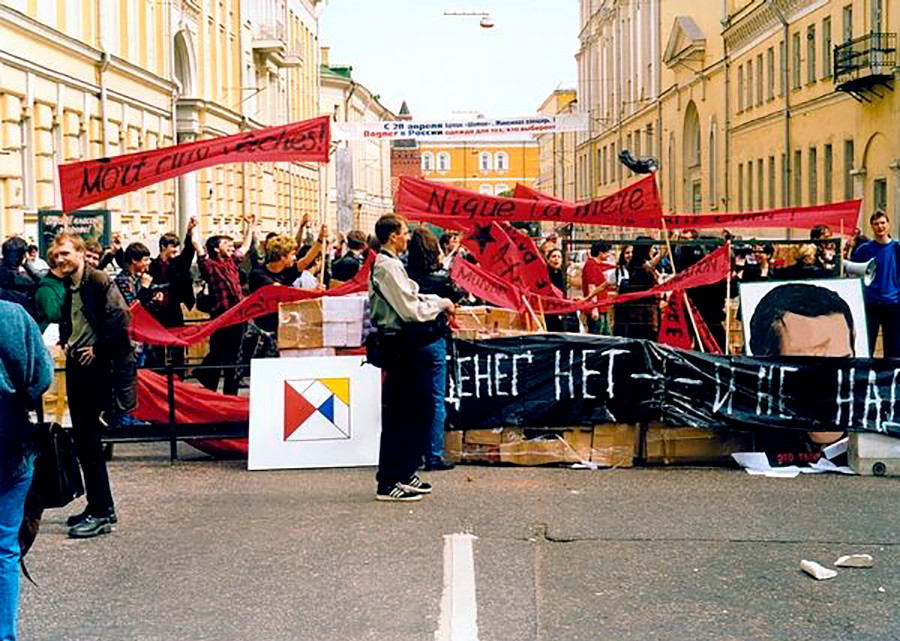 At the height of the 1998 financial crisis artists Avdey Ter-Oganyan and Anatoly Osmolovsky staged the largest-ever Russian art action, which involved erecting a barricade on Bolshaya Nikitskaya Street in Moscow. They blocked the road with cardboard boxes and hoisted banners on top with slogans in Russian and French - the action was timed to coincide with the 30th anniversary of the French student revolt of 1968.

The artists put forward their demands to the authorities that included a monthly salary of $1,200 for all participants in the action, permission to use drugs and the right to no-cost and visa-free travel around the world.

After three hours the column moved towards the Kremlin chanting, "We have won! And now we are going for a walk around the vanquished city!" After that it was dispersed by police. 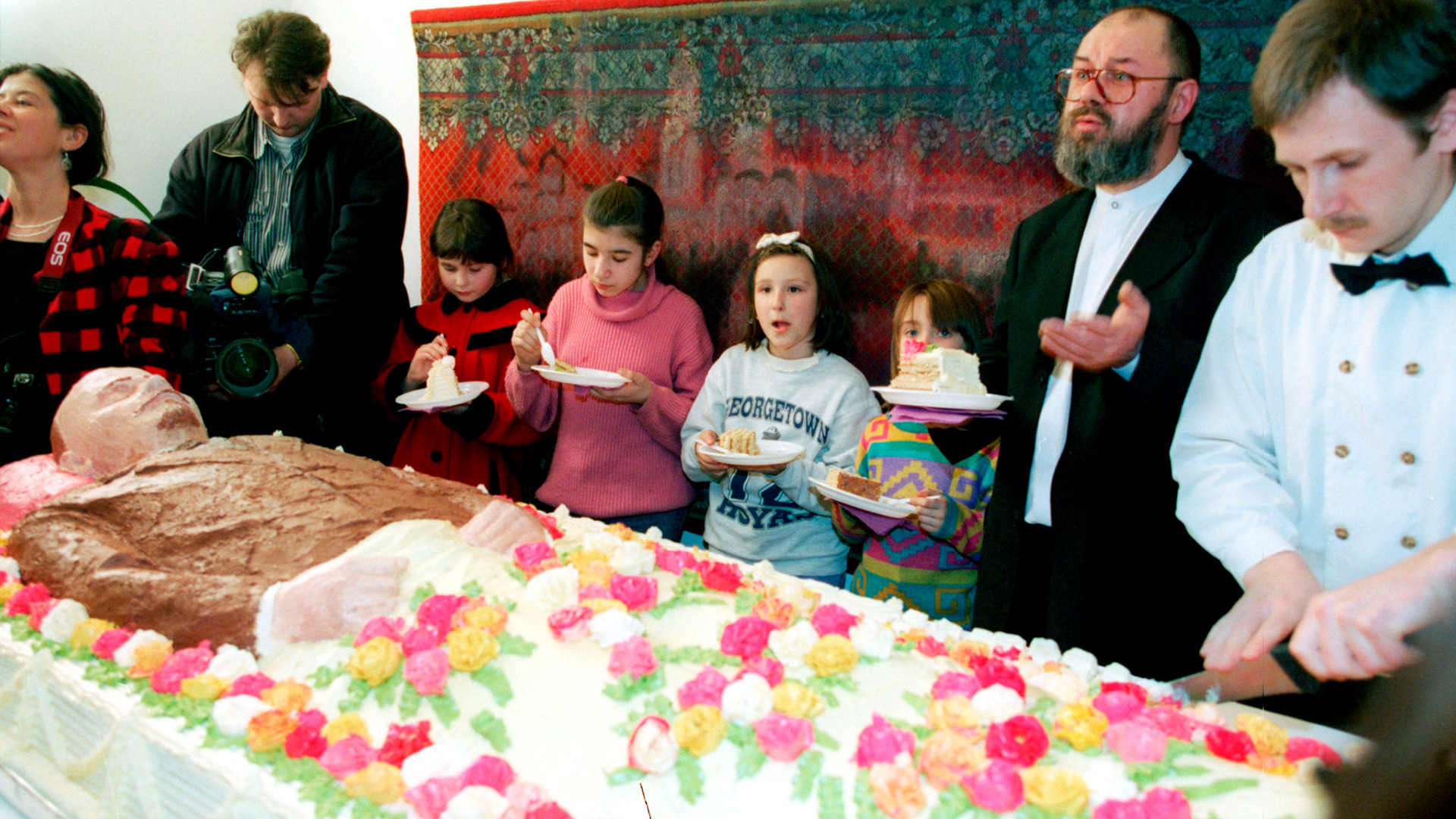 Imagine a funeral hall with a coffin in the center. To the strains of funeral music people take turns to come up and bid farewell to the deceased. Now imagine that the coffin holds the leader of the global proletariat, Vladimir Lenin, but his body is actually a sponge cake, and people go to it in order to eat a piece of the supreme leader.

Yury Shabelnikov's ironic gallery performance took place in 1998, but received a hostile reception from many quarters. It seems that the memory of the most venerated figure in Soviet history was still too fresh.

Newspapers wrote that only "utterly deranged, mentally-ill basket cases could have carried out this immoral and blasphemous act." And the "cynical insult to the memory of the great leader" was even discussed in parliament - one deputy had been invited to attend the event, but refused to take part in an "act of cannibalism." 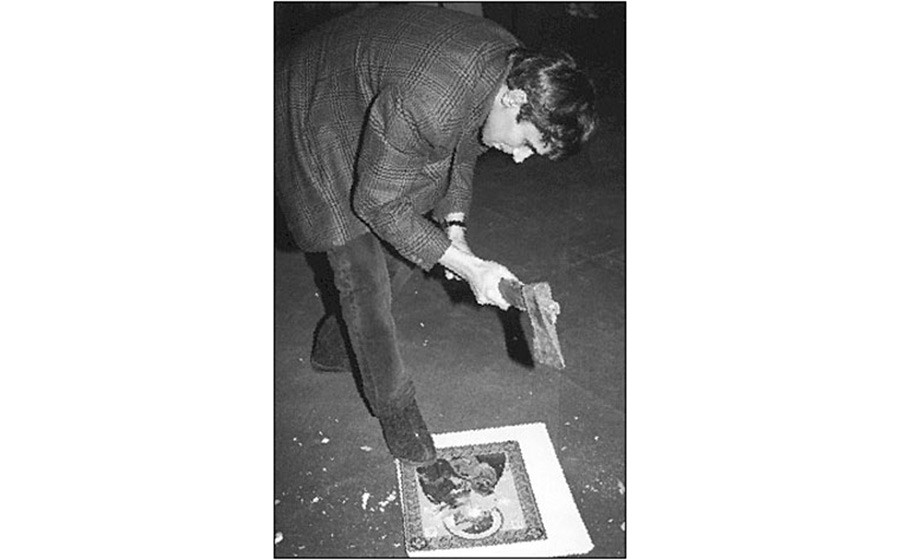 At an art fair in Moscow on Dec. 4, 1998, Avdey Ter-Oganyan held a performance where he first displayed reproductions of icons on stands among the paintings, and then invited visitors to desecrate them for a modest fee. Since there were no takers, the artist proceeded to hack at the reproductions with an ax. He was stopped by security guards who were summoned by outraged visitors.

Russian Orthodox Church Patriarch Alexei II harshly criticized the event, and a criminal case was opened against Ter-Oganyan under Article 282 of the Russian Criminal Code which prohibits actions aimed at inciting national, racial or religious hatred. Ter-Oganyan fled the country and sought political asylum in the Czech Republic, where he lives to this day. In 2010, the criminal case was closed upon expiration of the statute of limitations.

8. Do not Believe Your Eyes 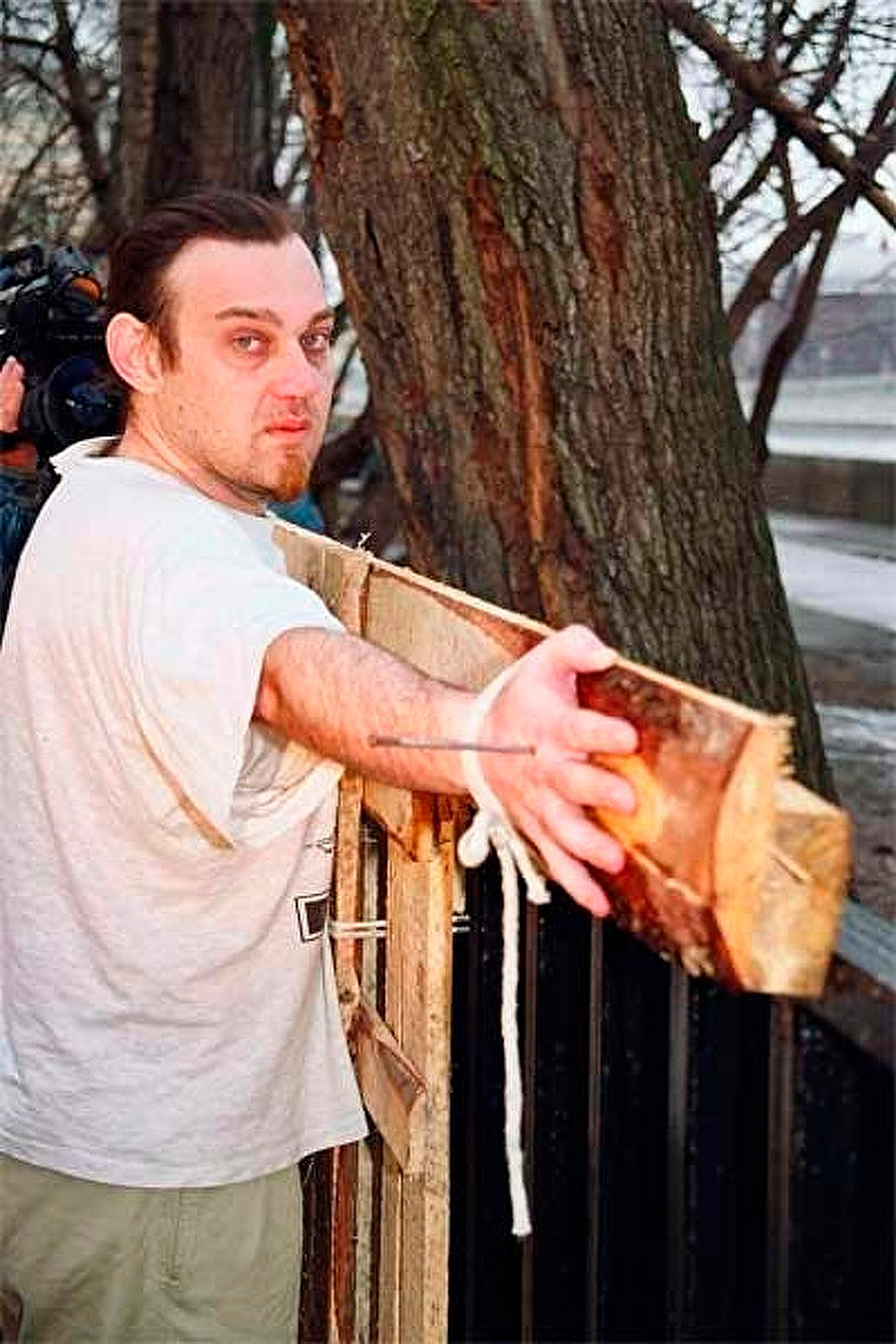 The name of Oleg Mavromatti has always gone hand in hand with the epithet "daring." He was editor of a punk magazine, leader of a punk group and member of the radical art group, Netseziudik, as well as an experimental film director.

On April 1, 2000, Mavromatti staged a daring performance in the very center of Moscow: assistants tied him to a wooden cross and drove 10-cm nails into his hands. The artist's back was inscribed with the words, "I Am Not the Son of God."

Mavromatti's take on the performance was: "The scene symbolizes the real suffering, the real sacrifice, which art has long been cashing in on."

Criminal charges were brought against the artist under Article 282 of the Russian Criminal Code which prohibits the incitement of national, racial or religious hatred, but the court did not manage to reach a verdict - Mavromatti fled to Bulgaria. He now lives in the U.S.

9. D*ck Captured by the FSB 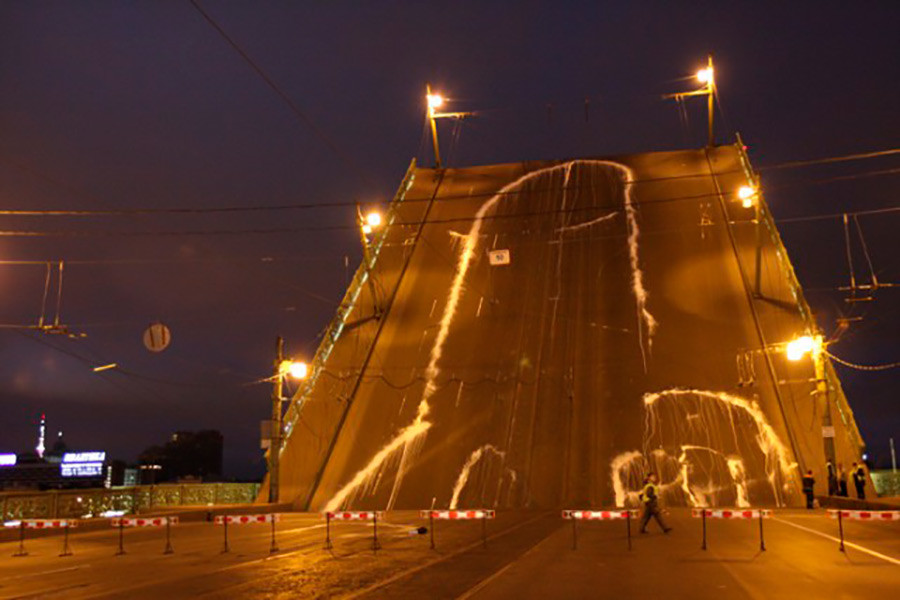 This happened in 2010 when members of the group drew a 65-meter phallus on one half of Liteiny Bridge that spans the Neva River in St. Petersburg. When the bridge was raised, the drawing stood "erect" on the hoisted bridge for all to see, directly facing the local headquarters of the Federal Security Service (FSB).

According to Voina, the action was in response to tightened security measures adopted by the secret services during the St. Petersburg Economic Forum.

One of the activists, Leonid Nikolaev, was detained and fined for petty hooliganism. 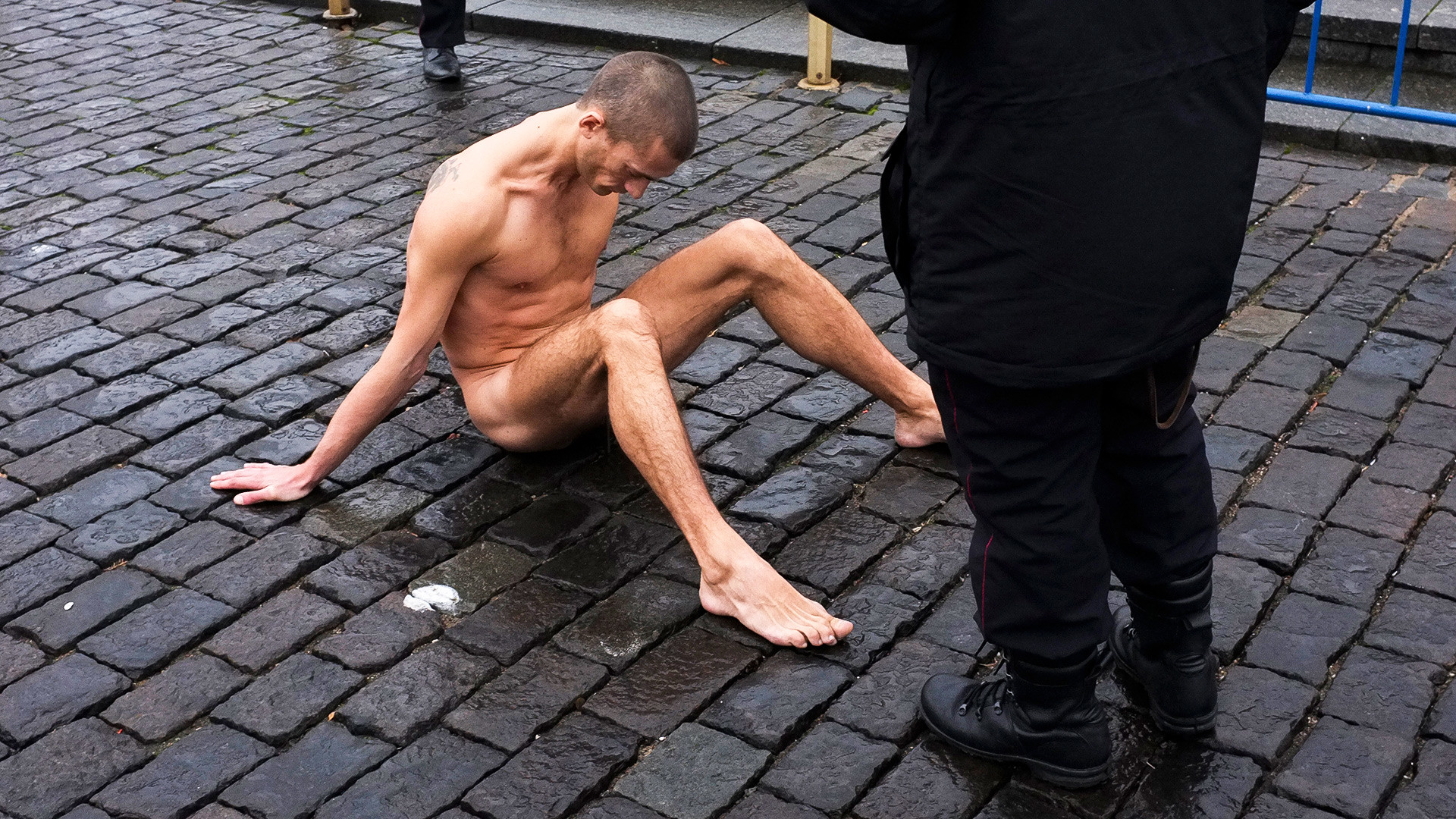 In 2013 on Nov. 10, which is national Police Day, a completely naked Pyotr Pavlensky nailed his scrotum to cobblestones on Red Square. Police covered the artist with a blanket while waiting for an ambulance. Medics helped Pavlensky to free himself.

He already was known for his self-mutilation protest actions (on one occasion he wrapped himself naked in barbed wire, and during another he stitched up his mouth), but this time he simply outdid himself.

The artist later said that the action was a metaphor for Russian society's political apathy.