5 crazy events that have taken place on Red Square

History
Alexandra Guzeva
Reuters
For centuries the scene of many colorful incidences, the cobbled space by the Kremlin walls has witnessed parades, execution, markets - and nowadays a popular New Year ice skating rink. And you would never believe what else has happened here….

Since ancient times, Red Square has been mainly used as a trading place. Also, people gathered by Lobnoye Mesto (a 42ft stone platform near St Basil's Cathedral) where important tsarist decrees were read out - and sometimes - public executions took place. the phrase "Lobnoye Mesto" went down in the popular imagination as a place where trials and executions take place.

During the Soviet period, when the capital was moved back to Moscow, Red Square became the main venue for official state events and parades. The massive spectacle of military hardware dedicated to victory in World War II is still held here every year

Red Square, situated right by the Kremlin walls, is a strategic place. Here people are expected to behave in a certain way and there are numerous close circuit TV cameras dotted around the famous spot. And, as rumor would have it, the area is crawling with mufti-clad special service agents. Nevertheless, here too events have taken place that even the best of Russia's security apparatchiks could not prevent.

1. The landing of a German 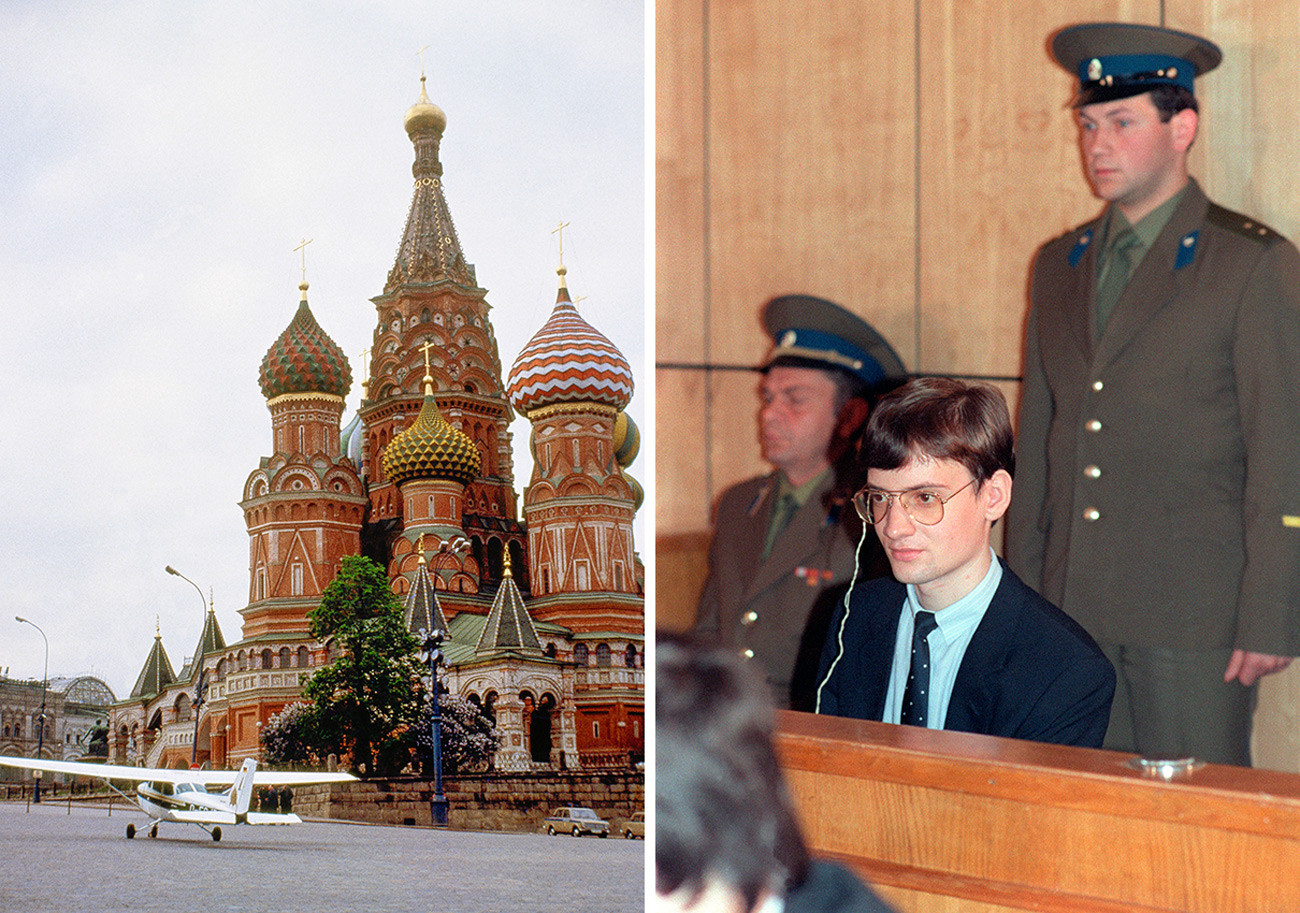 the twilight days of the Cold War in 1987 an amateur German pilot caused a real sensation - he landed his plane, without any official clearance, on the Bolshoy Moskvoretsky bridge leading to Red Square and taxied to a stop near Saint Basil's Cathedral.

Having hired a light aircraft in Helsinki, he managed to cross the Soviet border unobserved by radar. Later he was detected, but Soviet military commanders were cautious and didn't want to shoot down a civilian plane, so they tracked his flight. Emerging from the cockpit, Mathias Rust started giving autographs, but two hours later he was already under arrest, charged with hooliganism and crossing the Soviet border illegally. 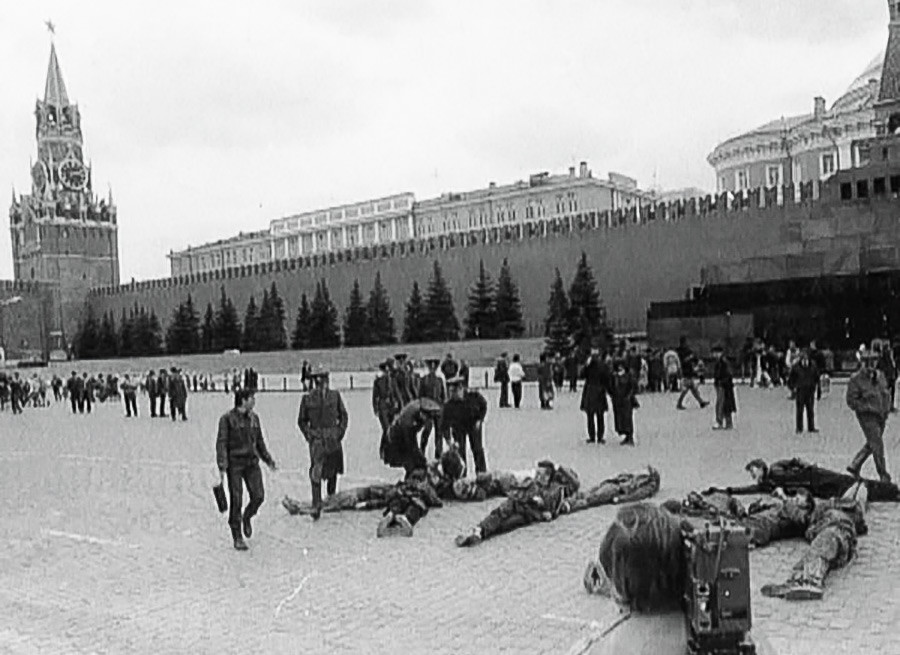 1991, young artists from the ETI movement (the Russian abbreviation for "Expropriation of the Territory of Art") laid down in Red Square, their bodies forming a three-letter word, which is a swear word in Russian for 'penis'. Anatoly Osmolovsky, one of the founders of art movement, Moscow Actionism of the 1990s, was behind the idea. The action lasted about a minute before police took all involved to a police station.

It was meant to be a protest against the enforcement of a ban on swearing in public places. Later the performance artists were supported by figures from the world of whose works contained profanities. 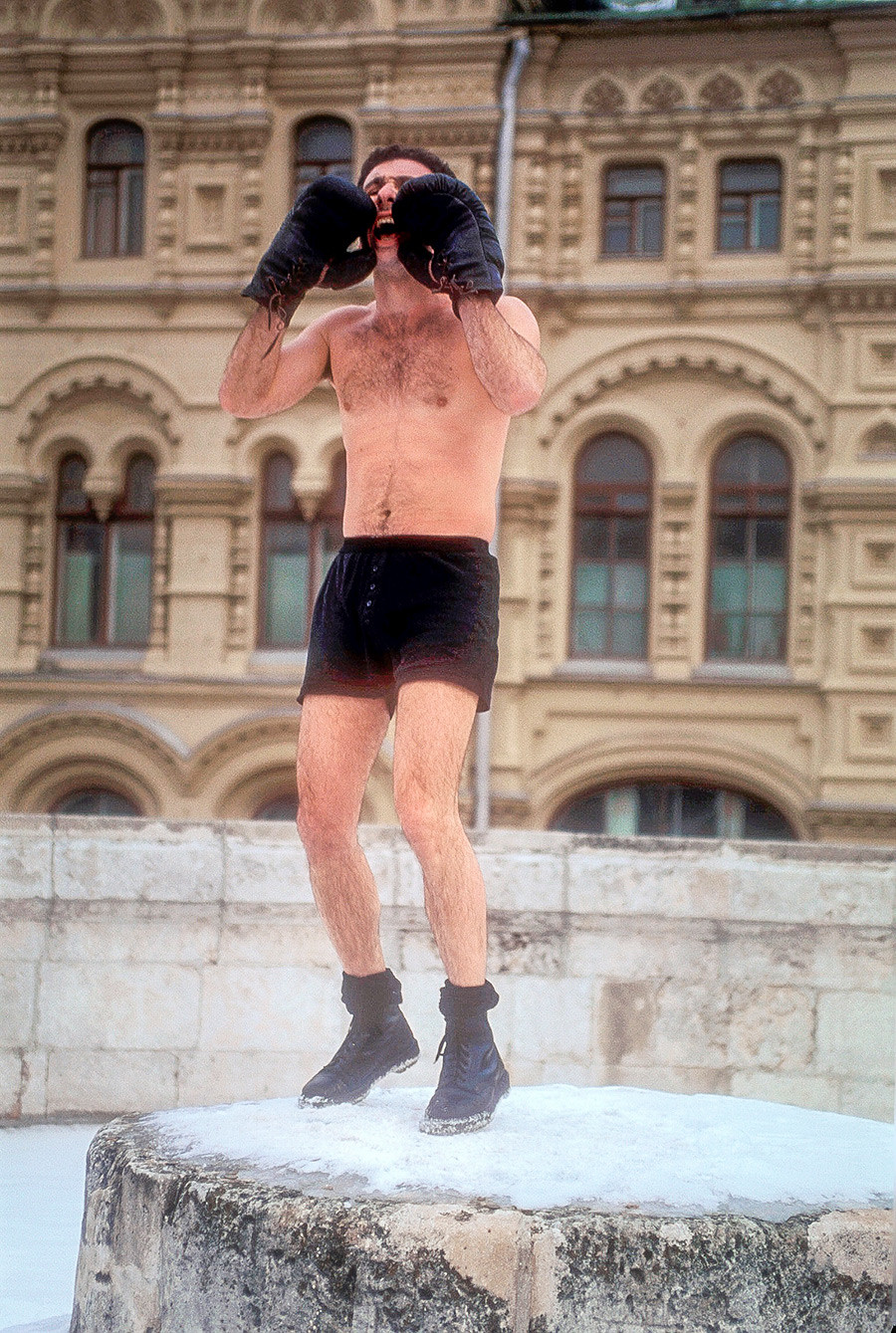 In 1995, performance artist Aleksandr Brener decided to challenge the first Russian president, Boris Yeltsin, to a fight. On a frosty day in February Brener came to Red Square wearing boxing gloves and shorts and started shouting "Yeltsin, come out!"

The action went down in history under the name First Glove and was a protest against troops being sent to Chechnya in line with a decree signed by Yeltsin.

Art gallery owner Marat Gelman, who helped Brener with his agitprop performance, recalls that the police detained the 'boxer' only half an hour later and quickly let him go. 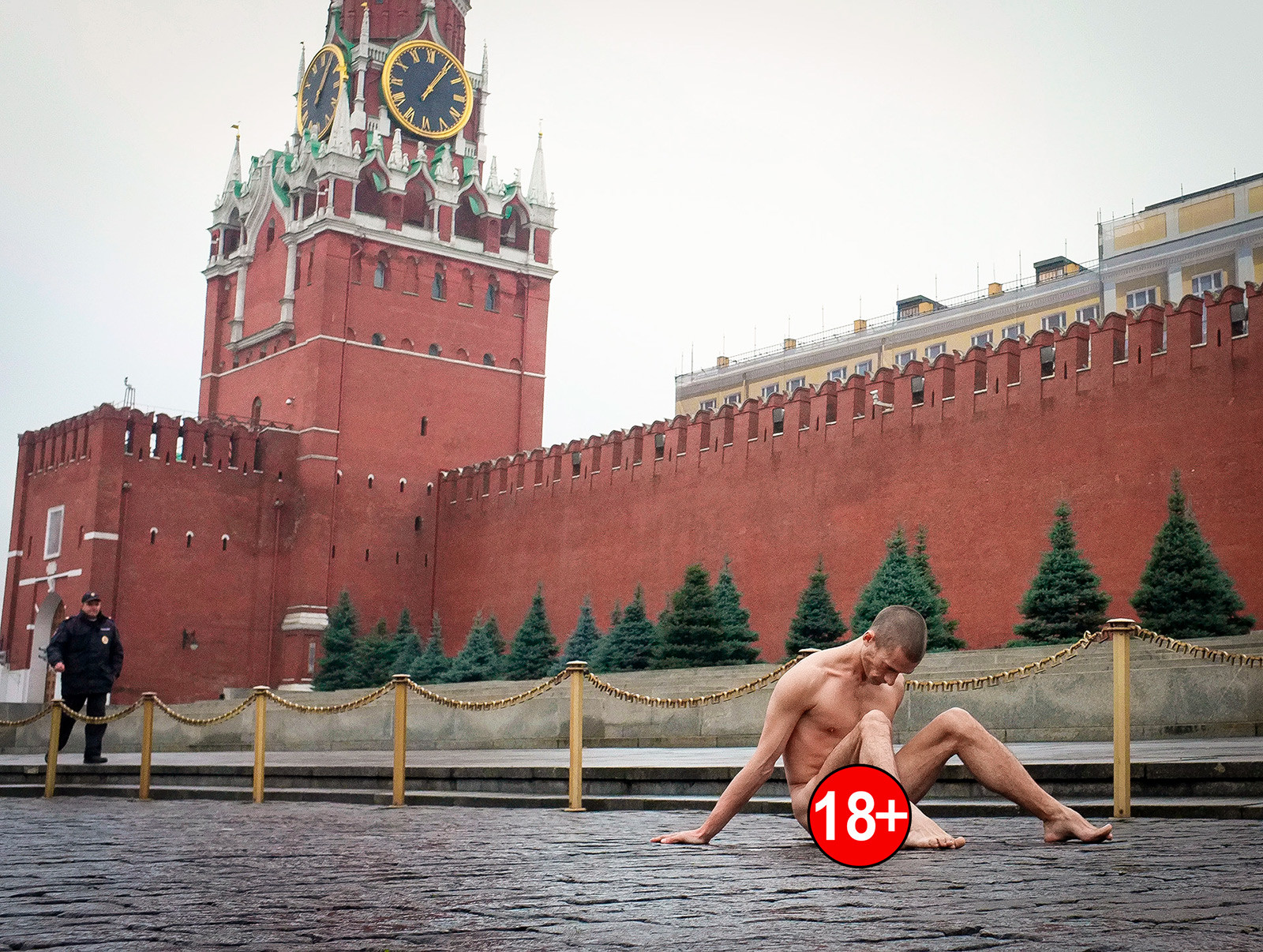 On Nov. 10, 2013, the Police Day public holiday, another performance artist, Pyotr Pavlensky, completely naked, nailed his scrotum to the cobbled ground of Red Square. He had been known for his self-injury protest actions before (he has also on other occasions wrapped himself naked in barbed wire and also stitched up his mouth), but this time Pavlensky surpassed himself.

Police covered the artist with a sheet while waiting for an ambulance. Medics helped Pavlensky to free himself. According to the artist, the action was a metaphor of political apathy in Russian society. 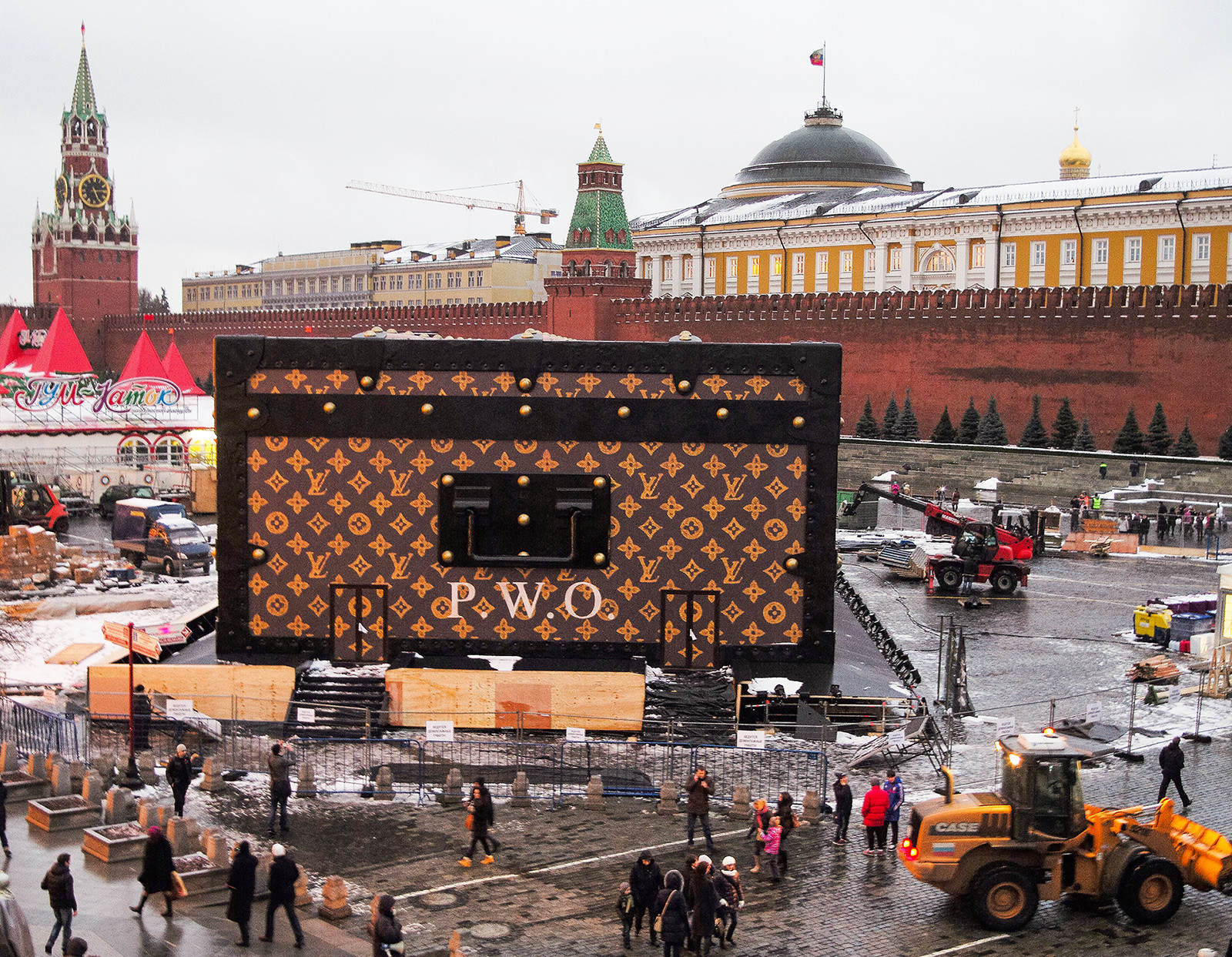 mark the GUM department store's anniversary in 2013, an exhibition pavilion in the form of a giant Louis Vuitton trunk measuring 30ft by 42 ft was installed in Red Square. The advertising installation had a charitable aspect - the proceeds from ticket sales were supposed to go to Natalia Vodianova's Naked Heart Foundation.

Nevertheless, the sight of the gigantic foreign object in the heart of Moscow produced such an outcry in society and prompted so many Internet memes that authorities ordered the pavilion, which had not even opened yet, dismantled.

Following the suitcase scandal, President Vladimir Putin approved a list of events that may be held on Red Square. They include the Victory Parade, the Spasskaya Tower International Military Music Festival, a New Year bazaar with ice skating rink, and a book fair.