Russia’s Anna Karenina musical to be shown in U.S. and UK cinemas 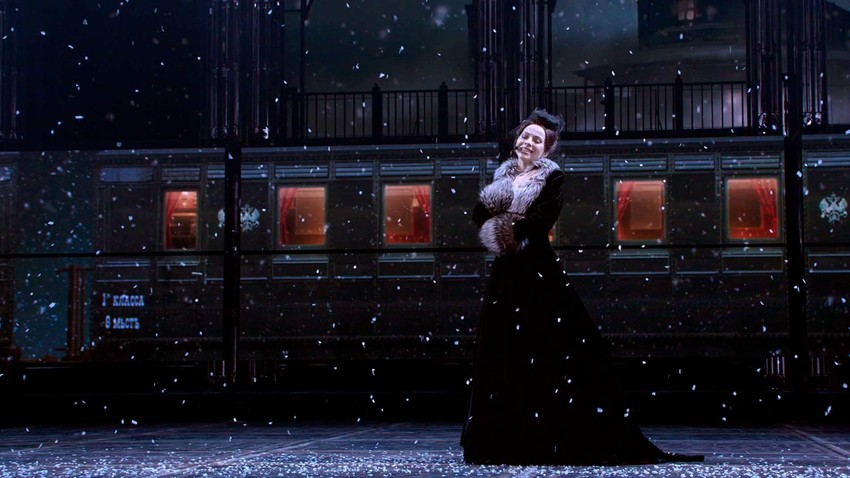 People living in America and the UK will be able to watch Russia's best-selling musical, Anna Karenina, staged by Moscow’s Operetta Theater. The performance will be shown throughout this month (in Russian with English subtitles).

The musical premiered in 2016 and its producer Alexei Bolonin spent much of the noughties staging licensed Western musicals on Russian soil including Metro, Notre Dame de Paris, and Romeo & Juliette.

“Tolstoy’s novel like no other is suited for a musical because it has all the necessary ingredients, most importantly, a love story,” Bolonin said.

Turning the famous Russian writer’s masterpiece into a musical was a little risky because addressing the book’s philosophical themes on stage is no easy task. However, it includes many direct quotes from the novel and all the important moments are reflected in the lyrics

main character of the musical is the train. Its lights blind the audience at the very start of the show and it plays a hand in Anna’s fate. Throughout the a huge wheel suspended from the ceiling turns, a reminder of inescapable destiny and wicked fate, and the action unfolds against a backdrop of “symphonic rock” — as critics have described the production’s musical style — performed by a live orchestra.

“Russia is a theatrical nation. We have actors on stage who graduated from world-renowned drama schools. That’s why a musical in Russia is not just about the quality of singing, it’s also a full-fledged drama,” Bolonin added.

There are several songs from Anna Karenina that could become just as recognizable as those from Phantom of the Opera or Cats, like the Russian lullaby by Anna to her son. The aria performed by the railway station attendant, who reminds everyone that they only have a one-way ticket, is also very catchy and Westerners may well be humming it to themselves before long.

Vault International Productions (VIPRO) and the Stage Russia HD project have teamed up to bring the musical to foreign shores. The latter is the brainchild of Eddie Aronoff, an American with Russian roots who has already brought more than ten Russia’s theatrical performances to the West, including classic Chekhov stagings and new experimental productions.