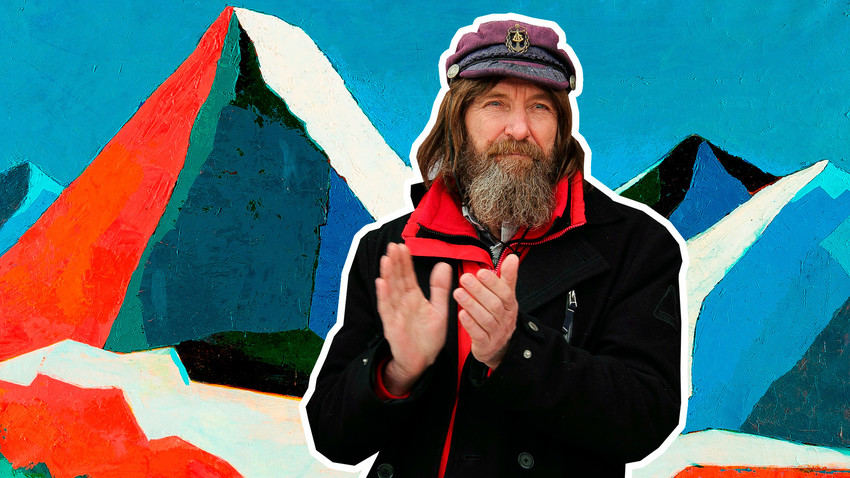 Fyodor Konyukhov; Andrei Ladygin/Global Look Press
He has circumnavigated the globe in a hot-air balloon, rowed solo across the Pacific and Atlantic, and scaled all the planet’s major peaks. But he is not only an extreme traveler, but an artist, whose works are good enough even for the Russian Museum in St. Petersburg.

Fyodor Konyukhov was destined to become a record-breaker and discoverer. That was evident from the moment he entered this world in near biblical style—right on the riverside as his mother was collecting shellfish for poultry feed.

To date, he has more than 50 mountain climbs under his belt, not to mention 17 crossings of the Atlantic Ocean by regular boat and several round-the-world flights, including in a balloon.

In between expeditions, Konyukhov does not put his feet up: he is also a clergyman, a writer (of around ten books detailing his adventures), and an artist.

“When I see how beautiful Earth is, what beautiful people she possesses, I want to show it. But how? Well, I’m an artist, so I draw. But then I look at my drawings and realize they don’t convey everything. So in my I tell about what I’ve seen, heard, been surprised by,” he explains.

Take a look at some of his paintings. 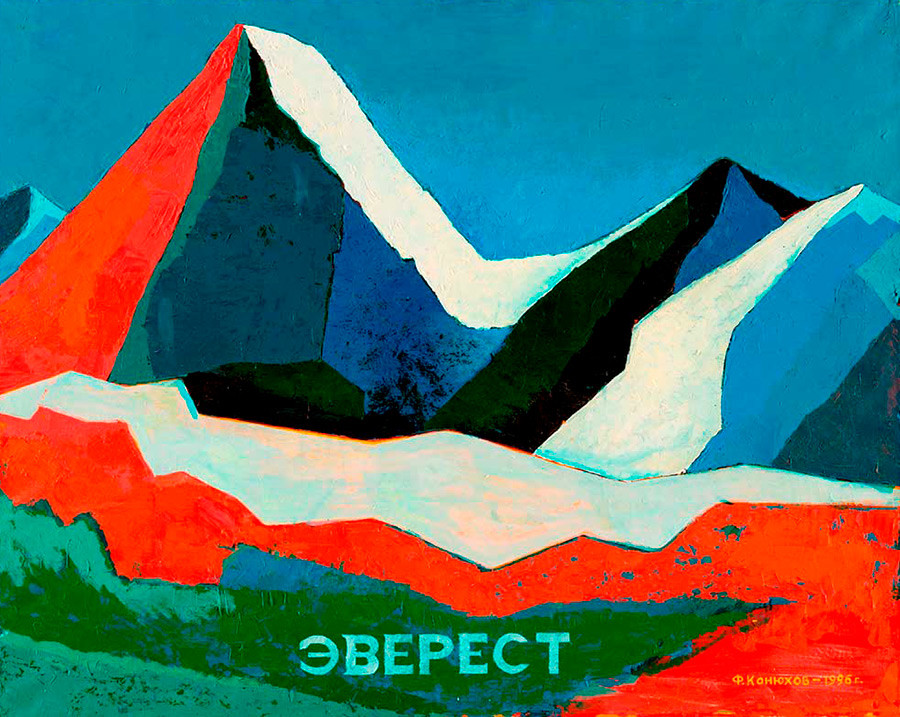 Konyukhov has climbed Everest twice (the second time at the sprightly age of 61). This picture was painted in 1996, after his first conquest of the world’s highest peak. 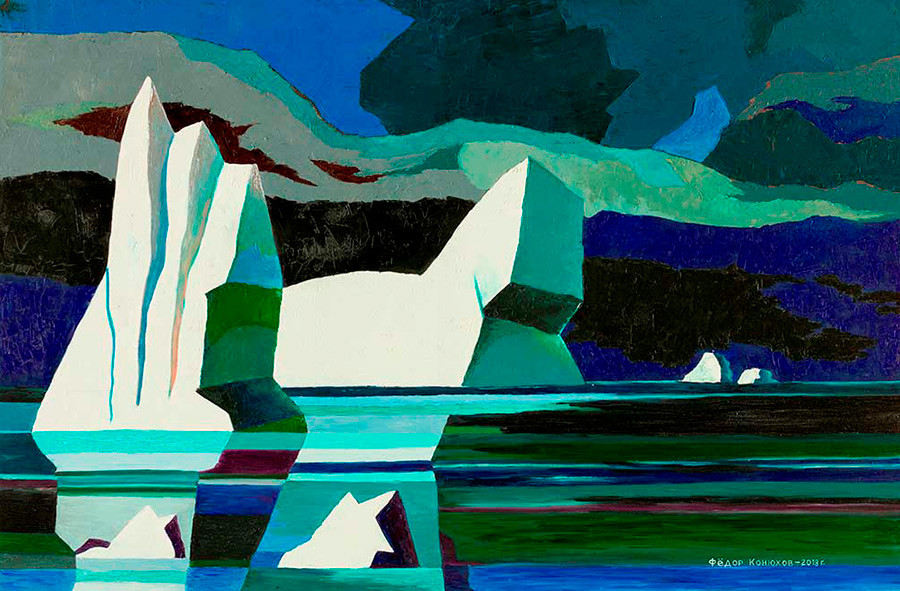 Fyodor was the first person in the world to reach all the five poles of the : the North and South Poles, the Pole of Inaccessibility in the Arctic Ocean, the 'Pole of Height' (Mount Everest) and the 'Pole of Yachtsmen' - Cape Horn. And of course, he couldn’t NOT paint icebergs! 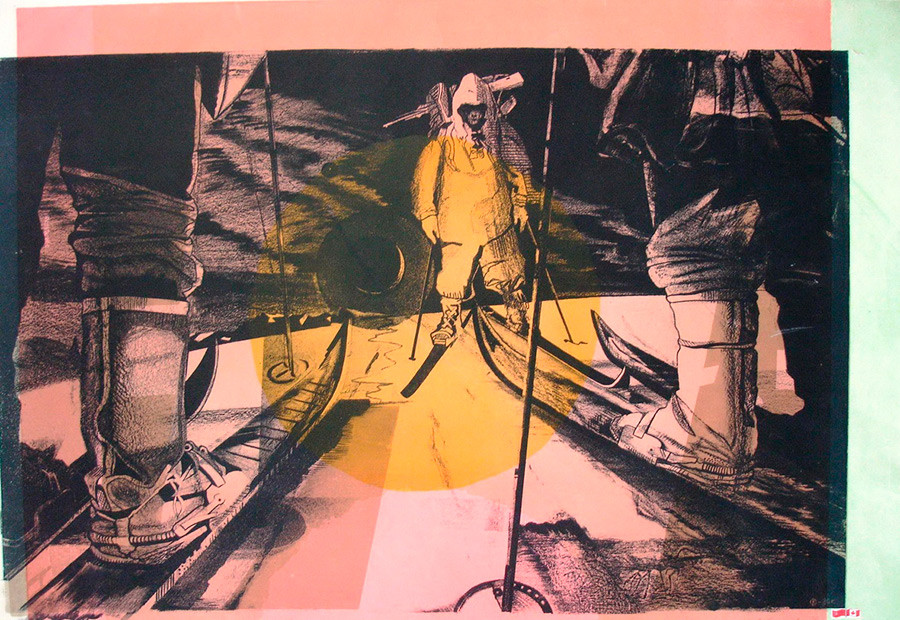 Konyukhov has been to the North Pole no fewer than three times. For his USSR-North Pole-Canada trans-Arctic ski expedition, he was awarded the Order of Friendship of the Peoples of the USSR.

4. Sketch for paintings from the series “Life and Ways of the Peoples of the North,” 1982 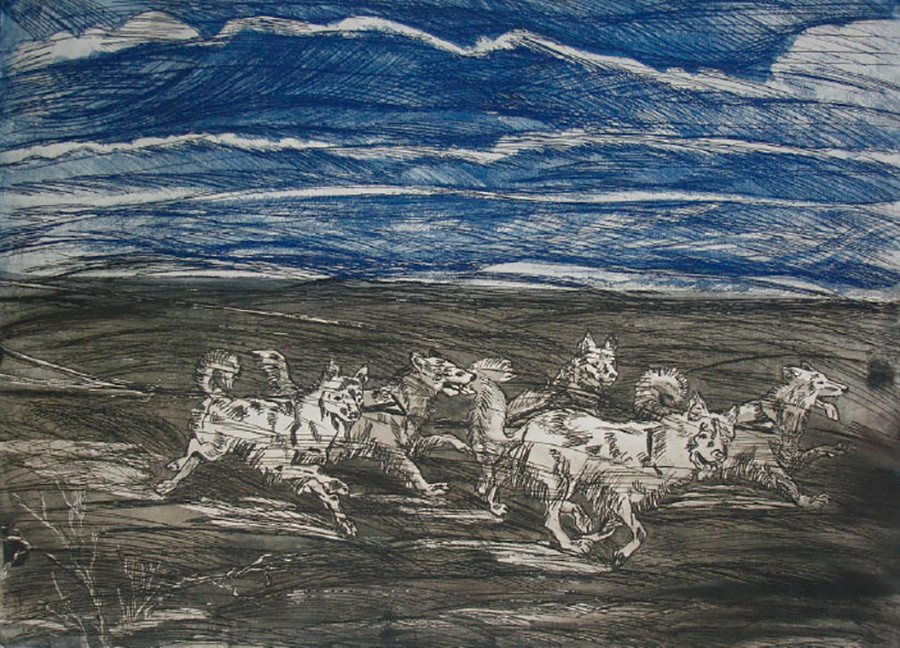 Fyodor spent a long time in the north, studying the local population and their customs. He covered more than 800 km by dog sled, and the animals doubled up as his models. 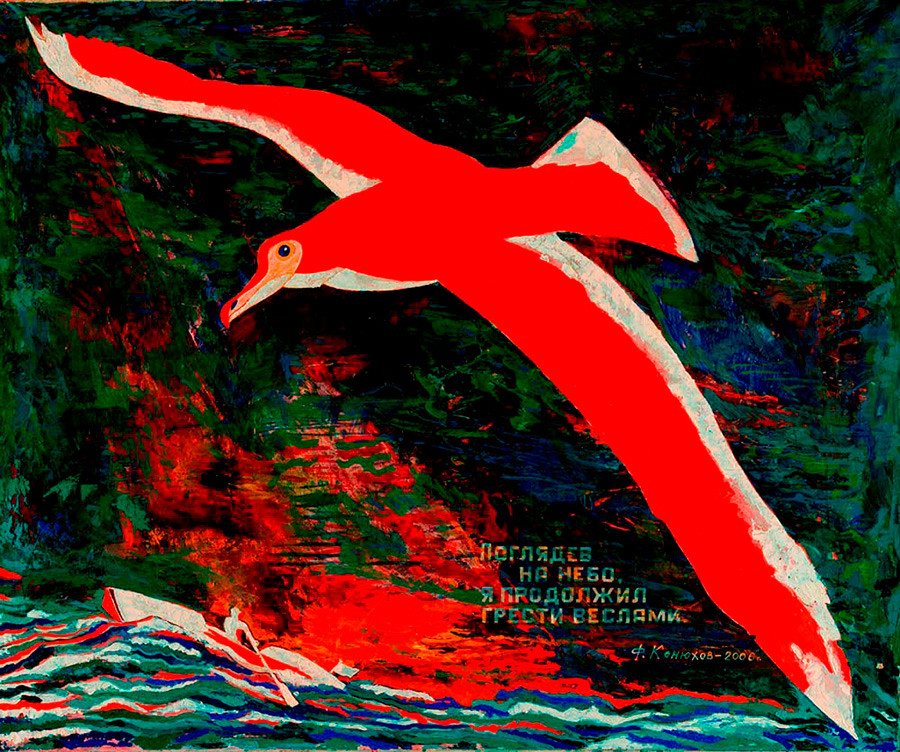 “I glanced at the sky, and carried on rowing,” reads the inscription on this painting. To some, Konyukhov’s style may resemble Nicholas Roerich, another famous Russian painter-traveler of the early 20th century. Perhaps that’s because alone among the elements, far from the madding crowd, nature’s hues appear much brighter than we are used to seeing them in grimy cities. 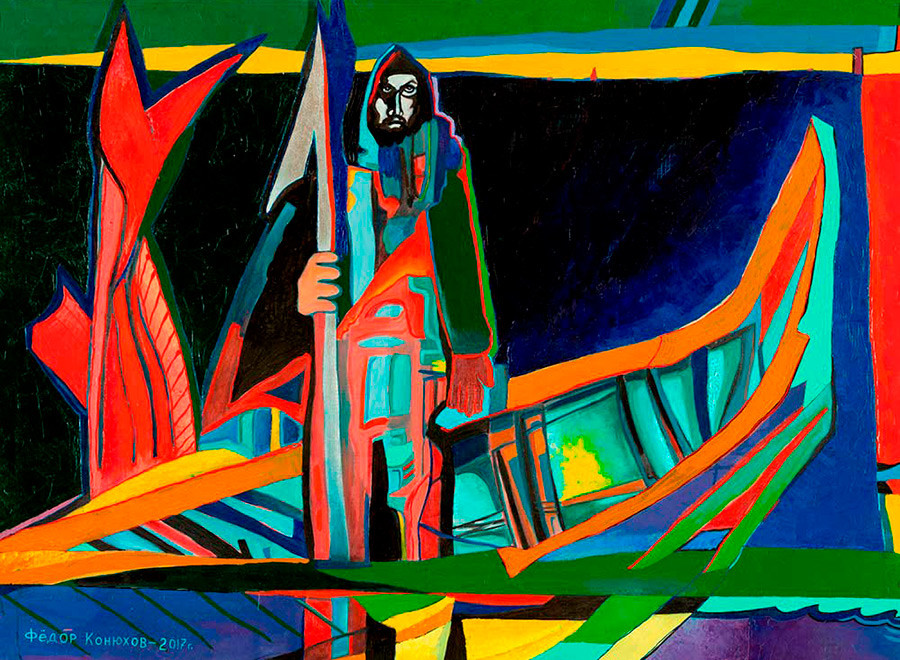 As Konyukhov himself says, it is during his death-defying exploits that he feels the “constant presence of God” more than ever. His wife, Irina, told Russia Beyond about an Atlantic crossing she made with her husband back in 2004, during which the starboard rudder of the yacht broke, the keel cracked, and water began flooding in.

They started praying to the Lord and St. Nicholas (known as the “Wonderworker” and vowed to give birth to a child if they survive (They had no children together until then). Their prayers were heard, and the first thing they did on arriving home was building a chapel in honor of St Nicholas next to Fyodor’s workshop in Moscow. True to their word, in 2005 they had a son, Nikolai. 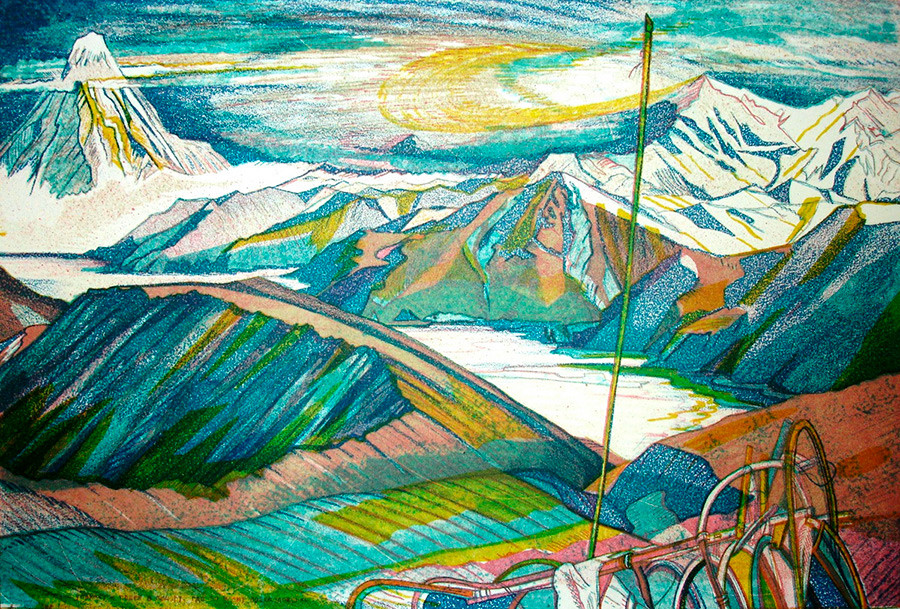 By sea, Konyukhov has explored Russia’s Far Eastern coastline (Vladivostok, Sakhalin, Kamchatka, Chukotka), retraced the watery footsteps of Vitus Bering, and erected a memorial plaque in his honor on the Commander Islands. 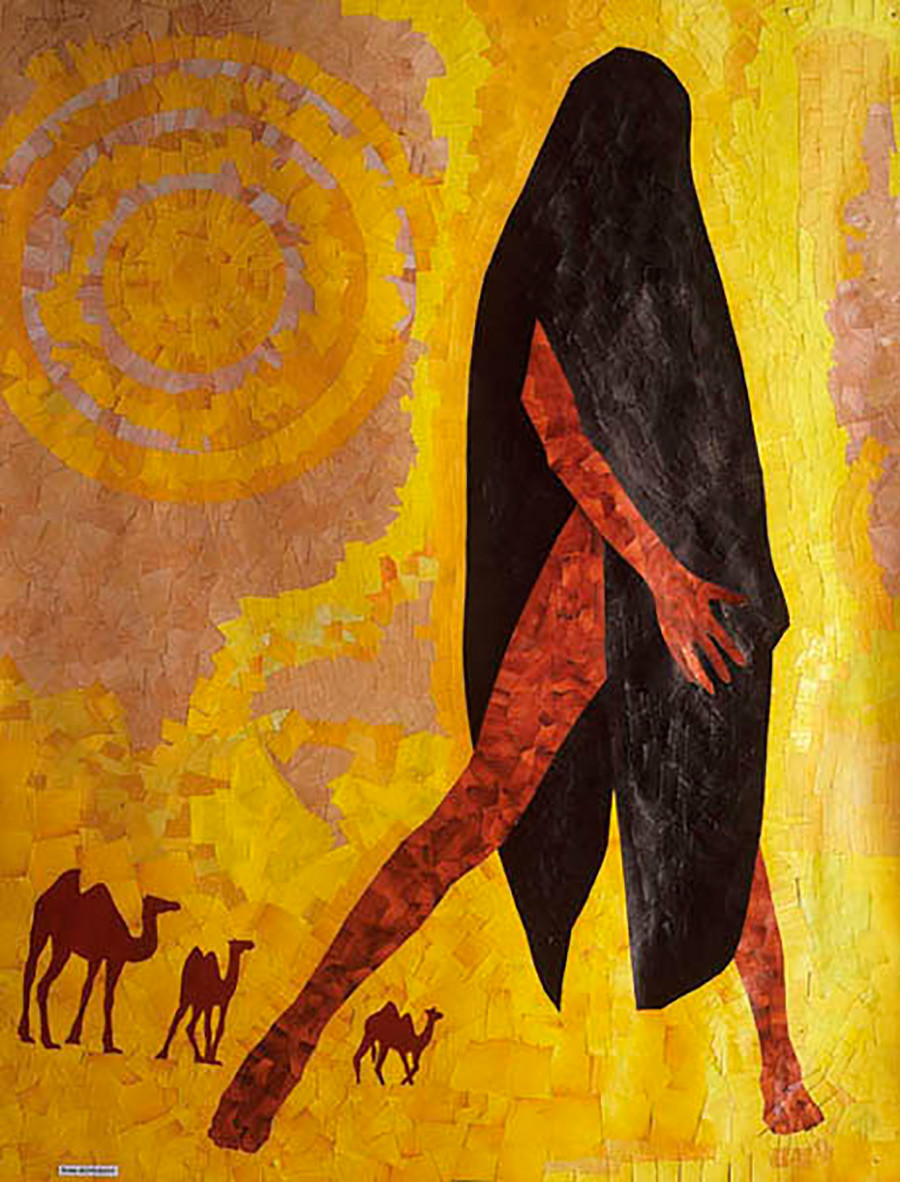 Inspired by the landscapes of Africa, Fyodor created a series of colored-paper collages. Using the same technique, he made portraits of famous adventurers and survivalist “friends,” such as Japan’s Naomi Uemura and English navigator Sir Francis Chichester. 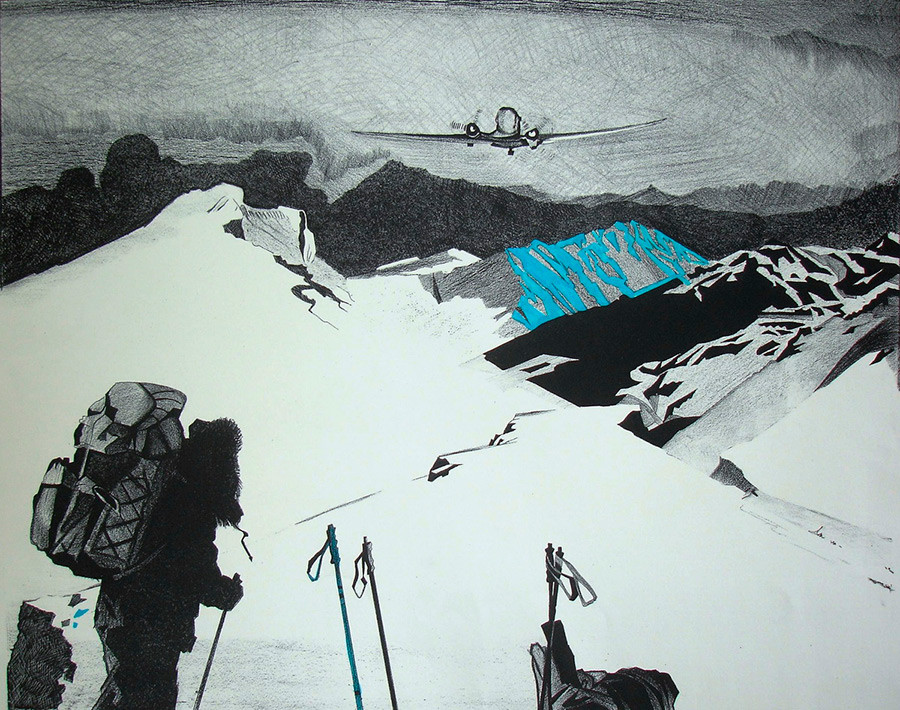 “Being aware of your ultimate goal is key. Before scaling Everest, I’d been climbing for 19 years. Before circumnavigating the globe on a yacht, I’d done competitive sailing for 20 years,” said Fyodor in an interview. 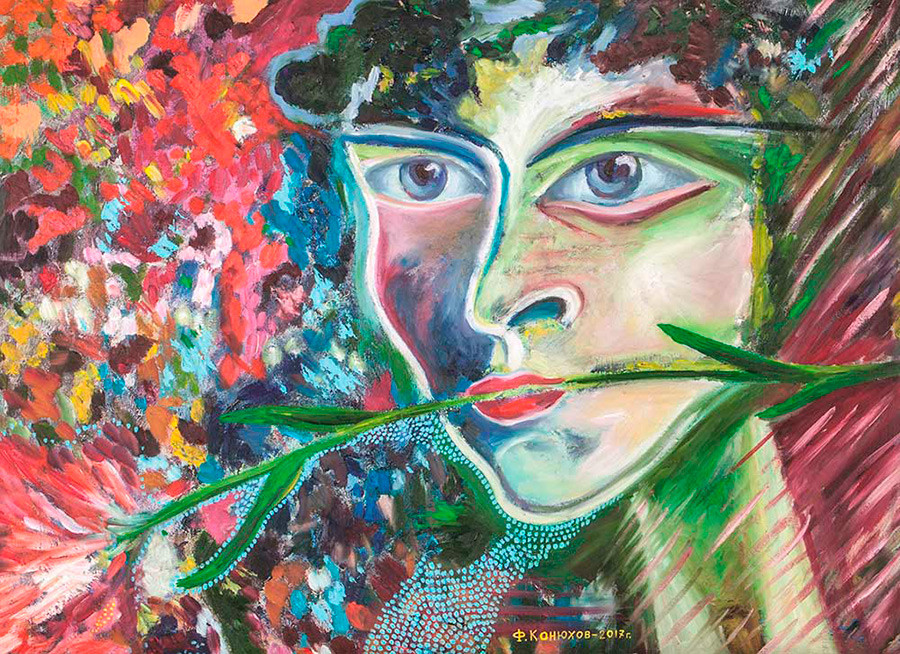 Another name for this picture is Irinushka [Irina] with a Flower. Fyodor’s wife says that her husband has dedicated many paintings to her. At their very first meeting, he said that she would be his muse.

The exhibition of paintings by Fyodor Konyukhov runs from March 28 to May 13, 2019, at St Petersburg’s Mikhailovsky Castle.