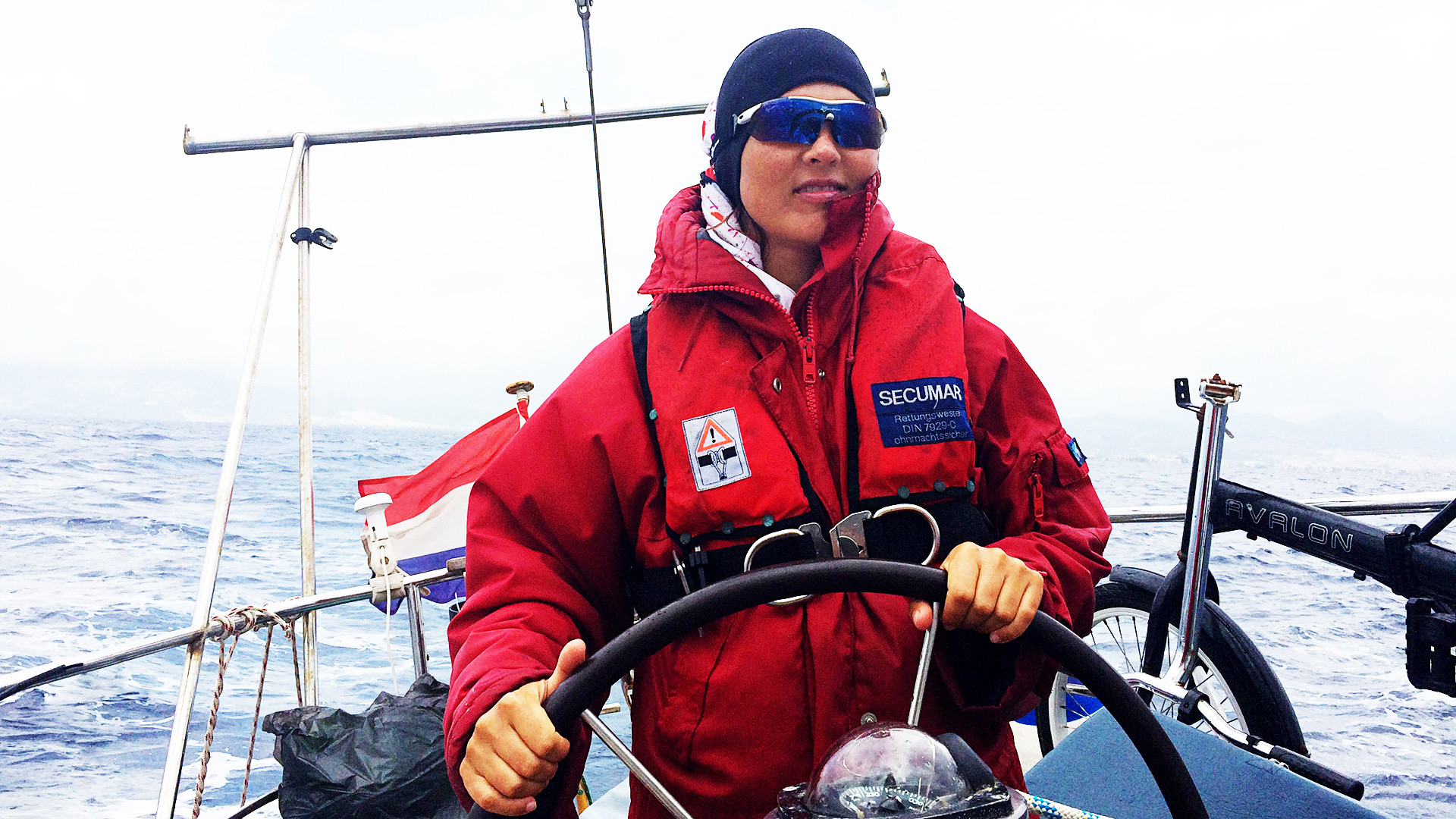 Personal Archive
A married couple from Russia with two children have been living on a yacht for almost three years, and do not want to return to dry land.

When Elena Surikova, 35, from Sevastopol, was nine months pregnant and traveling in Norway with her husband Vasily, she sat behind the wheel and drove to Kaliningrad to give birth. The trip, which many would describe as risky, did not faze Elena and Vasily—the couple already had experience of getting lost in the tundra and the Caucasus mountains without food or water.

But even those closest to them, accustomed to their travel whims, raised an eyebrow or two on learning in 2016 that the pair had left Moscow, bought a yacht, taken their child with them, and headed out to sea.

They have spent the past three years living on their yacht, seeing most of Europe, and preparing to circumnavigate the globe. 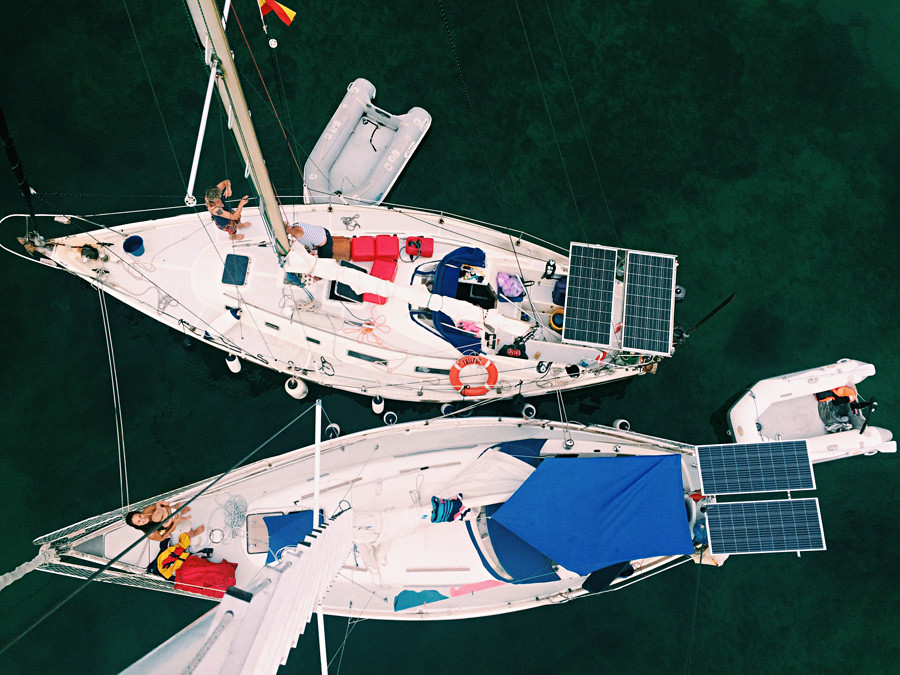 The family yacht is presently moored in the Balearic Islands (Majorca). Having already spent three months in the calm, warm waters of Spain, they plan to remain here to see out the winter storm season, when it is too risky to sail on a small yacht, especially with children. 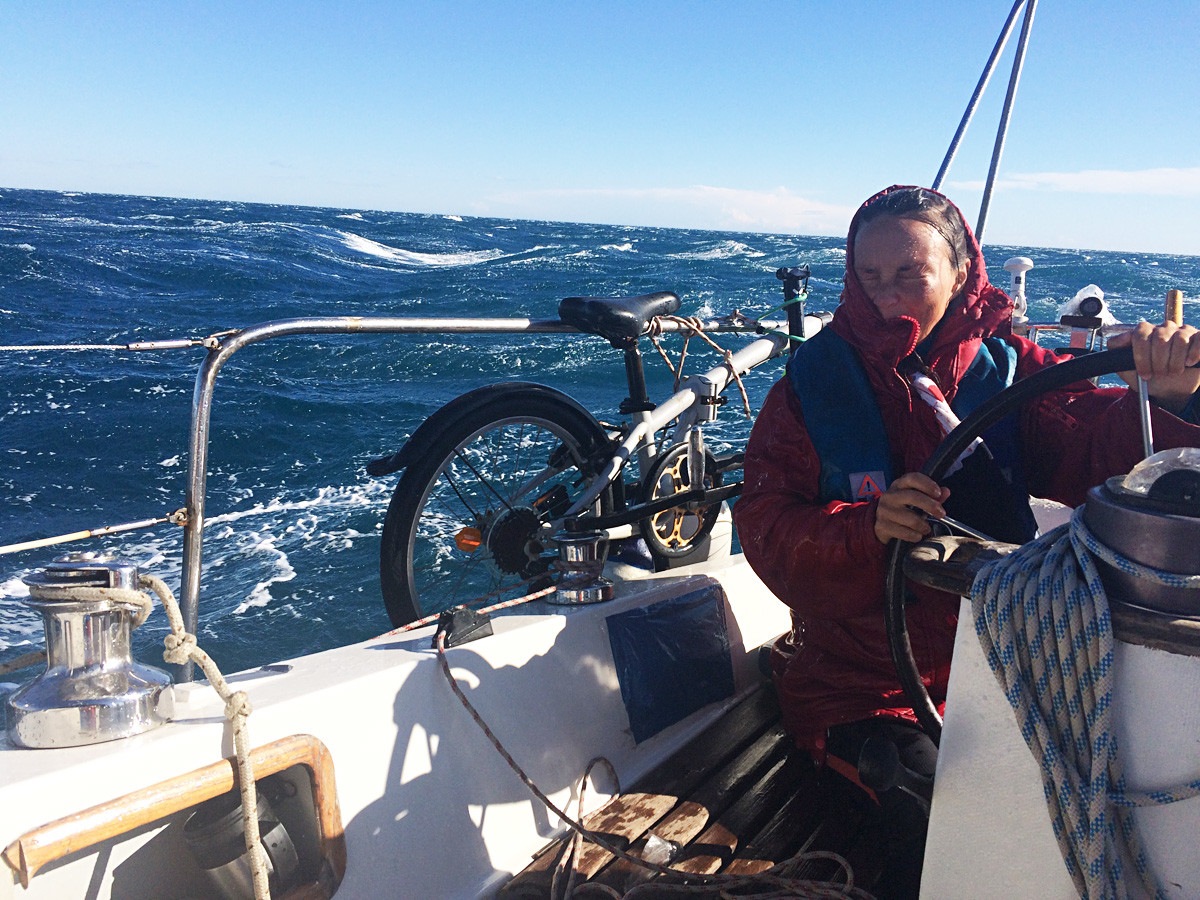 Despite their best efforts, the couple sometimes struggle to meet their ambitious plans and schedules. They initially intended to spend the winter of 2018 in Tunisia, and then, after taking in the African coast, charting a course eastwards to the Indian Ocean. But the sea made a few adjustments.

Things sometimes go wrong with the yacht, and it takes time to repair it. Sometimes the family just wants to stay in a certain place for a little while longer. “We spent a whole month in Ibiza, and now three months in Mallorca. We plan to stay here another three, and then make our trip to Tunisia in spring via France and Italy,” says Elena. 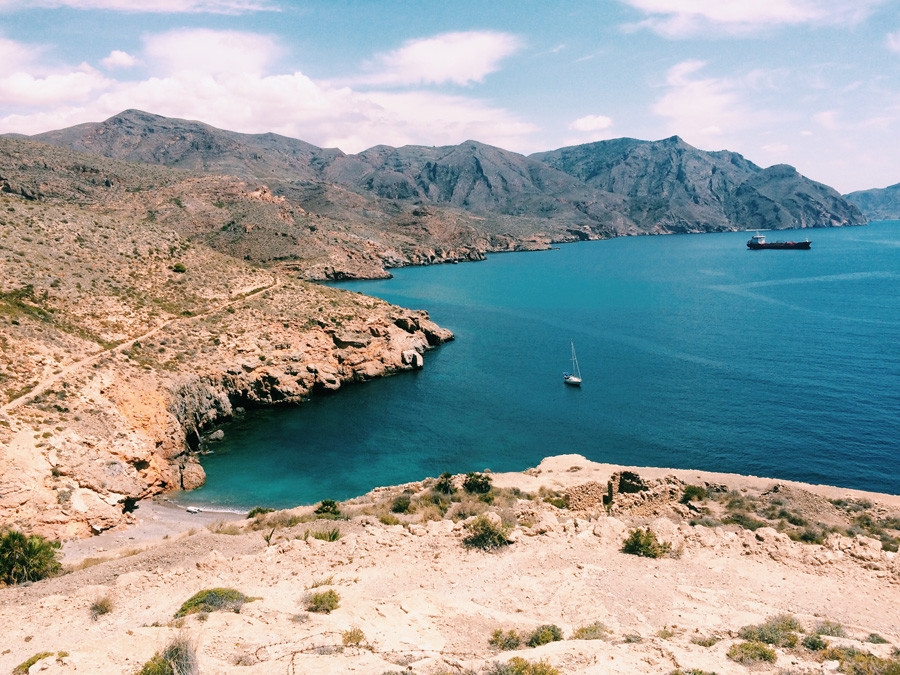 Plans for a round-the-world voyage, covering the Indian Ocean, South America, and across the Pacific, might seem extravagant, but the family is in no hurry and still has time on their side. They have spent three years exploring the length and breadth of Mediterranean. Given that Elena, it seems, is not averse to facing old age aboard a boat, anything is possible, however insane.

The whole odyssey itself began with persuading her husband, whose only knowledge of the sea came from Elena’s stories, to ditch everything for a life on the waves.

To start with, Elena introduced her husband to the open water. Vasily grew up far from the sea and only recently took up freediving (diving without scuba gear). One tiny matter remained: how to persuade her spouse to chuck everything and go to sea with her. 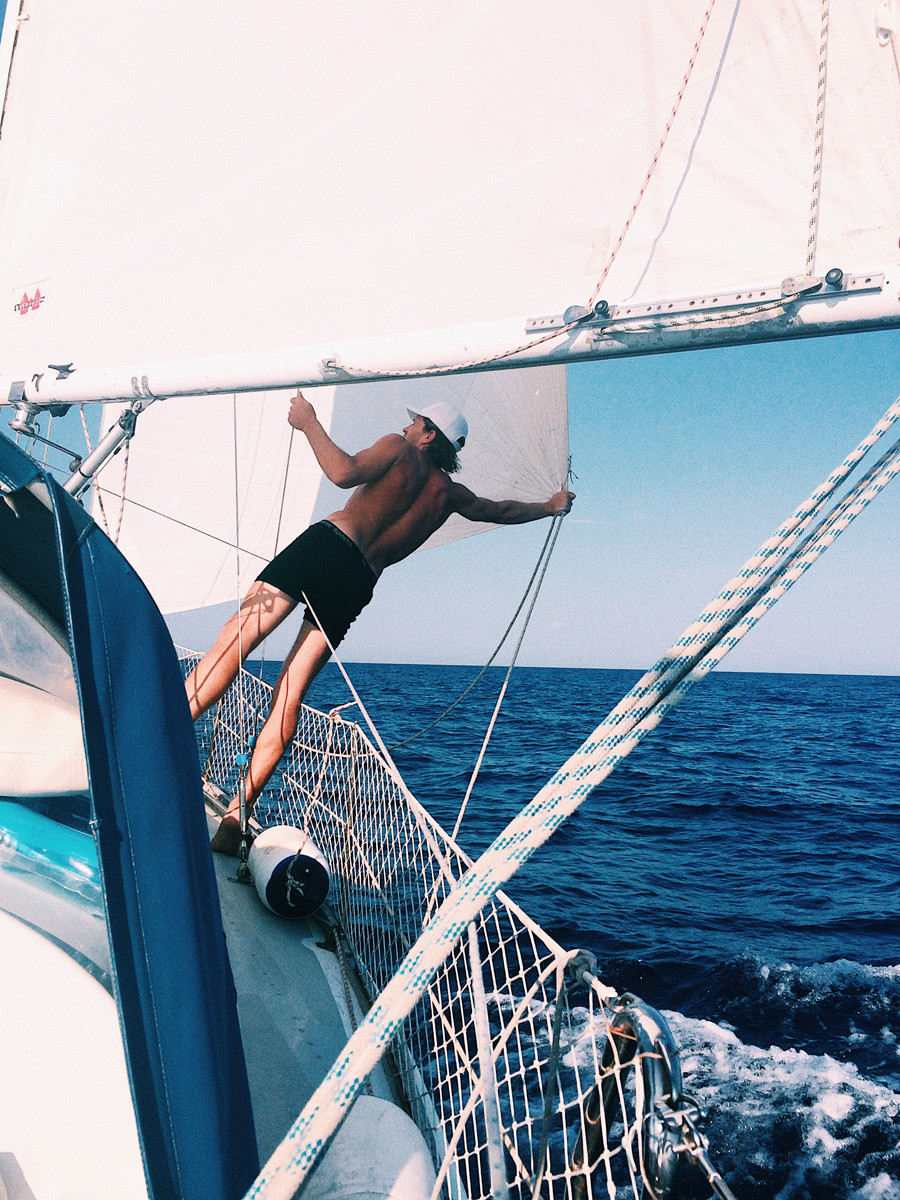 “It took me some time to get Vasya [Vasily] interested. I filled his head with amazing stories about stunning beaches and great fishing, and the fact that we could go anywhere and no one would need to see a piece of paper. He was won over!” says Elena.

Vasily agreed to live on a yacht for a couple of years. But Elena had bigger plans… a decades-long trip round the globe.

The duo began to study the practicalities of living on a yacht and found that most of the information online played into the stereotype of yachting being elitist. In the end, it didn’t cost them an arm and a leg: €700 for a skipper’s license for Elena and €9,900 for a 1972 Amel yacht, purchased from an elderly German. 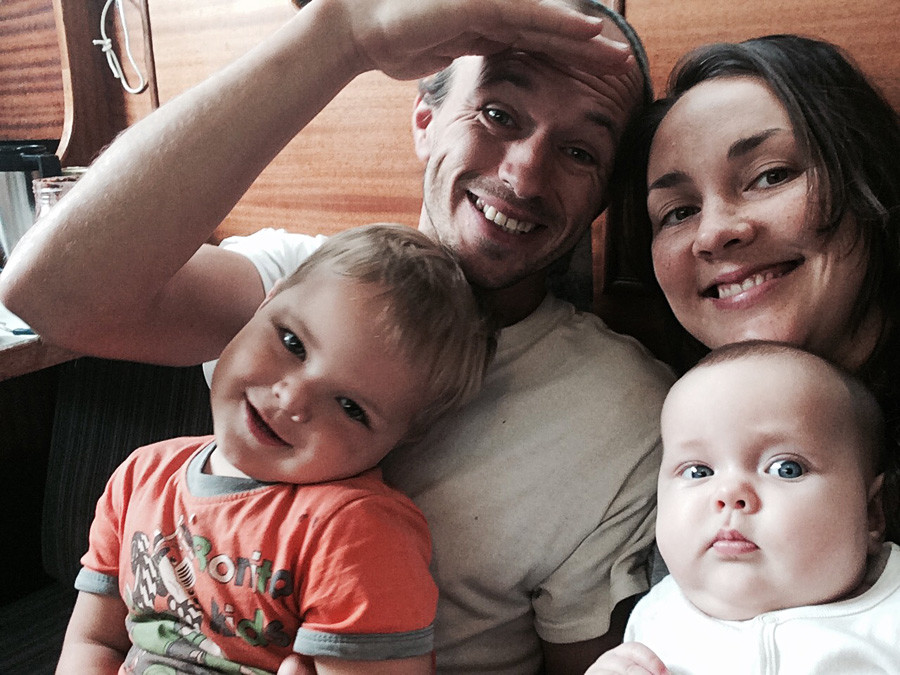 “We told him it was our first yacht and we wanted to sail south. I could see in his eyes that deep down in the depths of his soul he longer for such freedom and would have loved to do the same…”

Going out to the open sea for the first time was scary. “We had next to no equipment. Online it said we needed all kinds of stuff, but we had just a few tablet-based maps, a compass, and an old echo-sounding device,” says Elena. 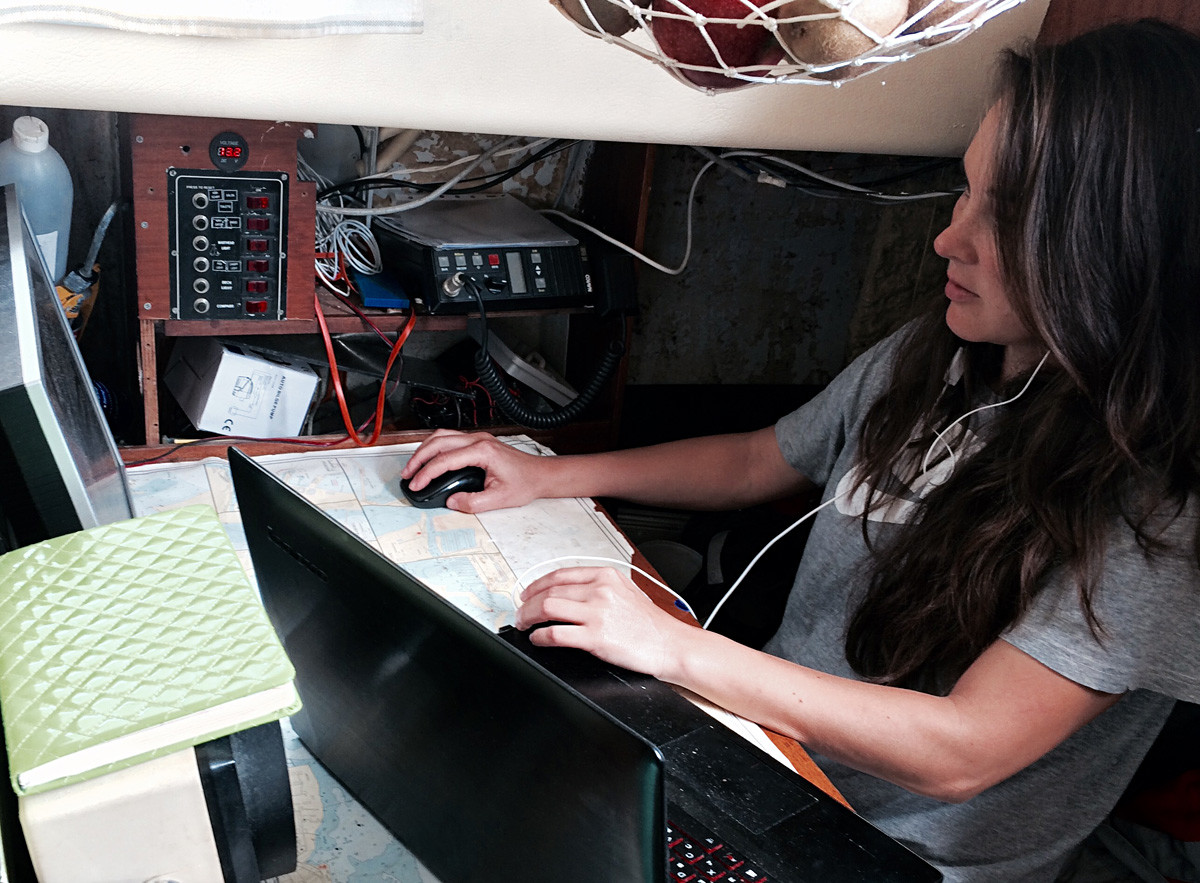 But the family soon got used to the hardships of life on the high seas, of which there are quite a few.

When food runs out, for instance, there’s no handy supermarket round the corner. “By the way, we conducted our own little experiment, and remarkably it turns out that it’s possible to survive a whole week on protein cocktails, the main thing is not to forget about vitamins and carbohydrates,” tells Elena. 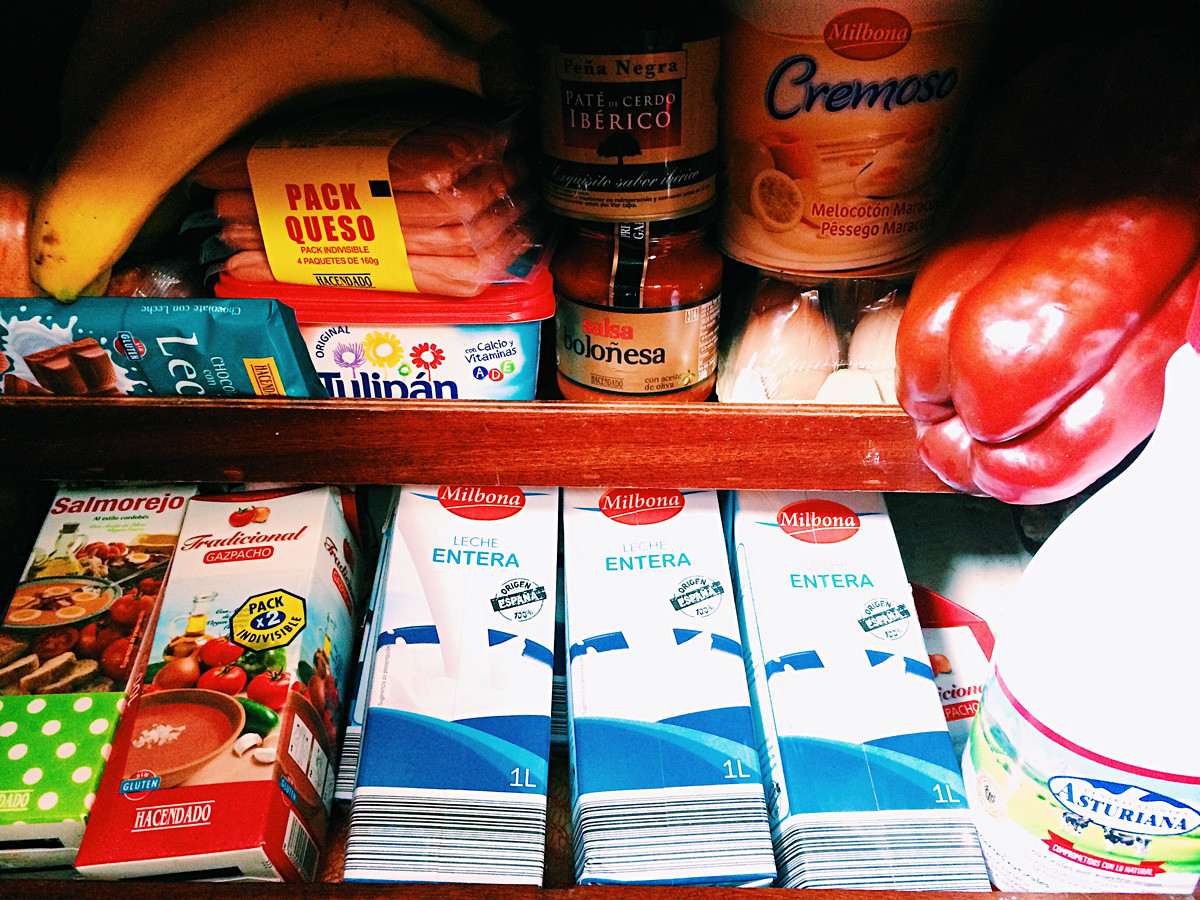 Time is the best teacher: now the couple are ready for pretty much anything the sea has to throw at them.

“Now we prepare in advance for difficult days ahead. We have a strategic stockpile of dried fruits, tasteless cookies (always tasteless so we don’t eat them too quickly), canned food, protein, and flour, plus fishing tackle and bait—we always have fresh fish when we feel like it.”

A few lifehacks also help them get by. They have a stash of pleasant edible surprises to keep their spirits up during difficult stretches, and a stockpile of sports nutrition. “When the going gets tough, sports nutrition helps way more than usual food,” says Elena.

The pair do not always buy products in stores on land. Often, they catch sea reptiles and fish wherever their yacht heaves to. A quick dive is usually enough for a dinner of fresh octopus, shrimps, and cuttlefish. “It’s ironic that seafood in shops can be very expensive. But for us, it’s what we live on when times are hard.” 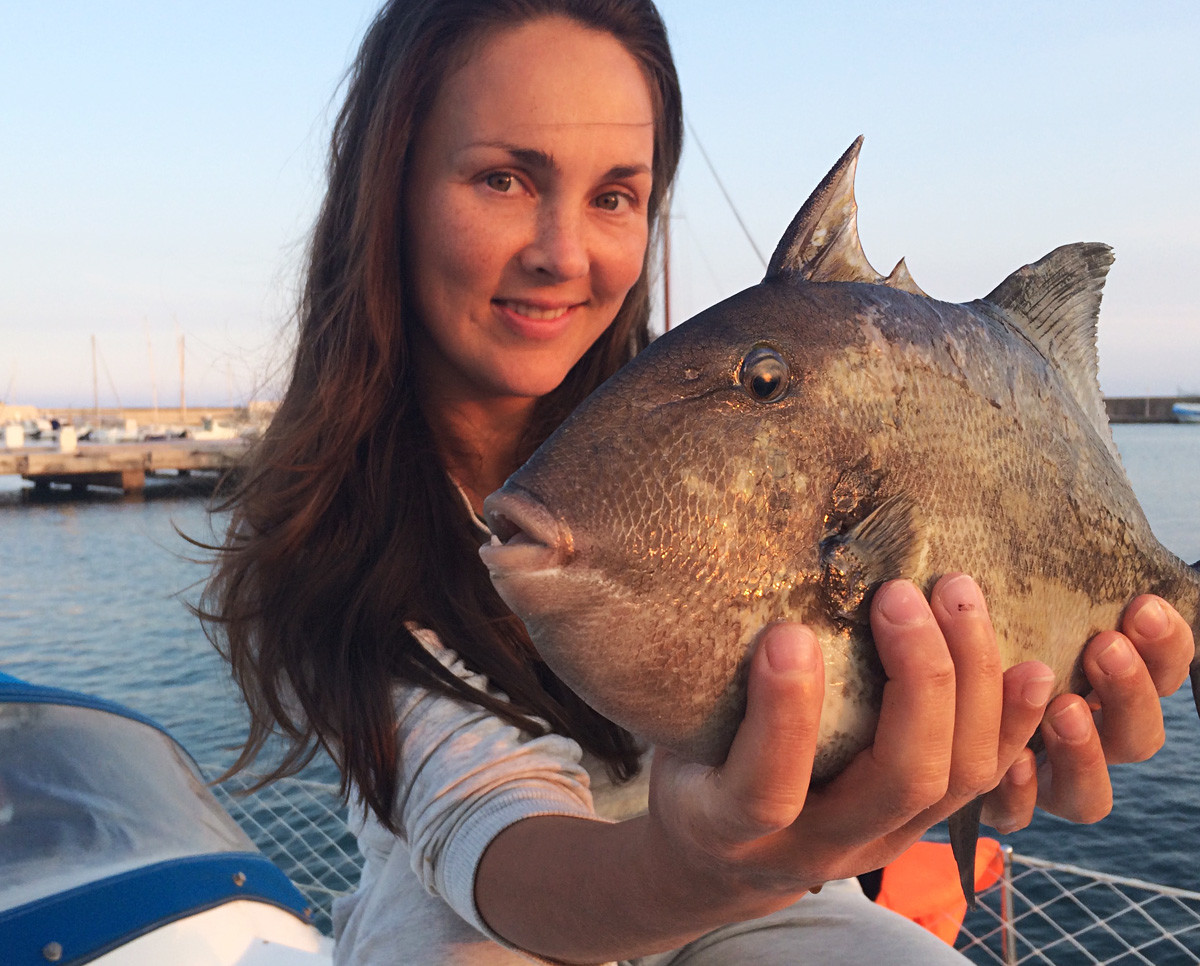 The woman and the sea

Despite their parents’ constant worrying and pleas for them to return to dry land, Elena and Vasily have no intention of going back to their former lives.

After spending her entire second pregnancy aboard the yacht, Elena gave birth to their second child in Spain and returned to sea almost immediately afterwards. Now the couple are not only traveling, but raising two small kids in very unusual conditions. “A living environment is the best place for children to learn. Animals, plants, natural phenomena, languages, psychology—it’s all here, not in books and classrooms,” says Elena. 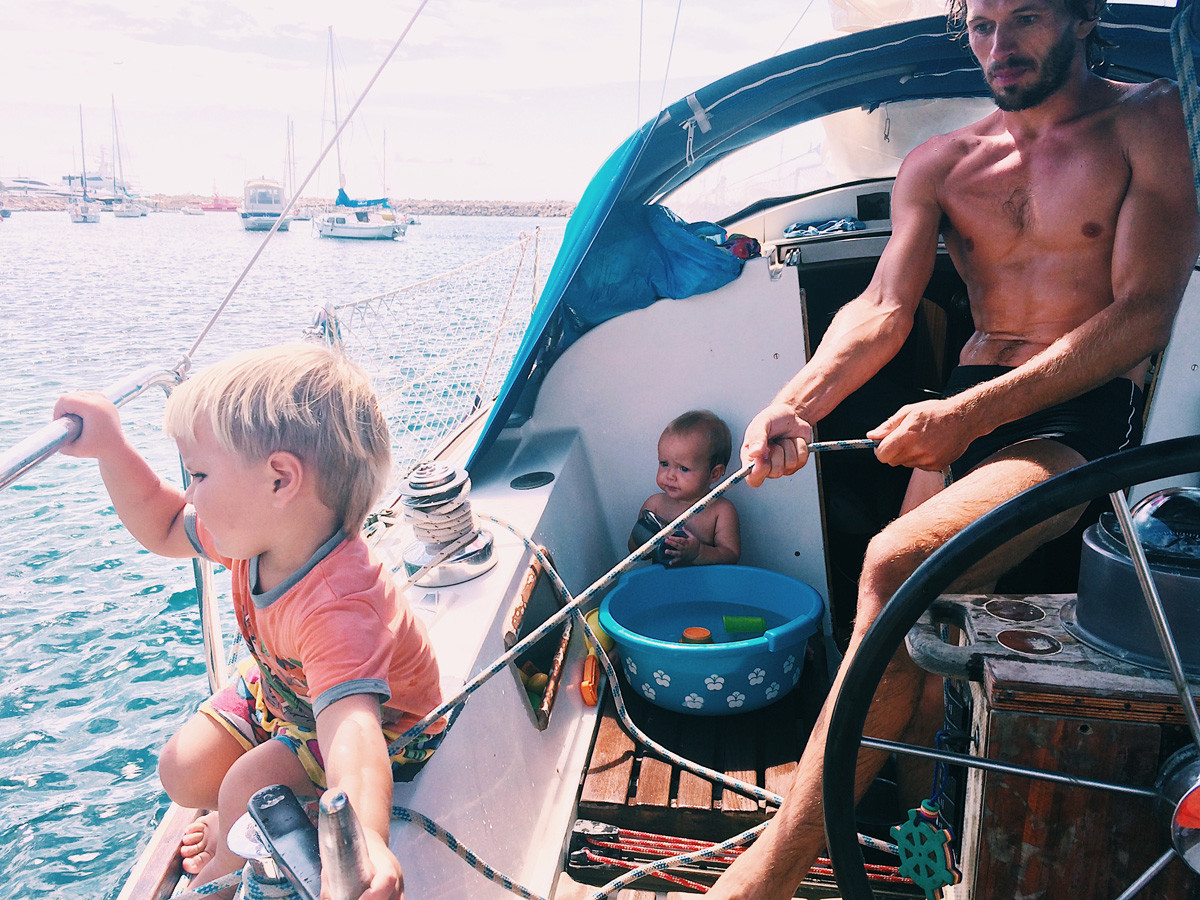 She also believes that the sea slows down the ageing process. Fresh air and constant physical activity keep the body and soul in good shape.

The couple earn a living from fees for magazine articles, and run Patreon, YouTube, and Instagram accounts where they make money from videos about their travels and offer consultations on the nuances of going freelance.

They are not planning to return to terra firma and sometimes (jokingly or not) ponder the prospect of old age at sea.

In response to a question about what she would most like to change in other people, Elena says that she would like “land people to be the same as sea people.”

“Out here, people have no age, country, politics, or religion. We are free, and no one encroaches on the freedom of others. We’re always glad to help each other. The doors of our homes are open. Spite, envy, insincerity, and the like are all left behind on the shore, they have no purpose here. We don't need to be bullied by anyone into behaving like human beings—it comes naturally.”