OPINION: Everything wrong with Netflix’s ‘The Last Czars’ 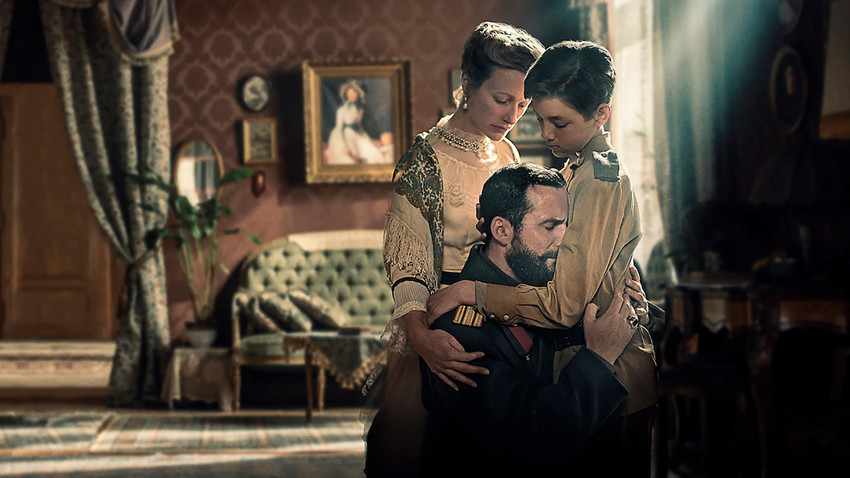 The show was meant to be ambitious but ends up being rather pathetic.

Adrian J. McDowall/Netflix, 2019
The show tried to combine a meticulous historical explainer with an unforgettable spectacle full of beauty, tragedy, sex, and violence. The result, however, looks sloppy to the point of being pathetic.

For us Russians, any chance of approaching The Last Czars with any kind of seriousness was doomed the moment someone posted this screenshot from the Netflix show on the web 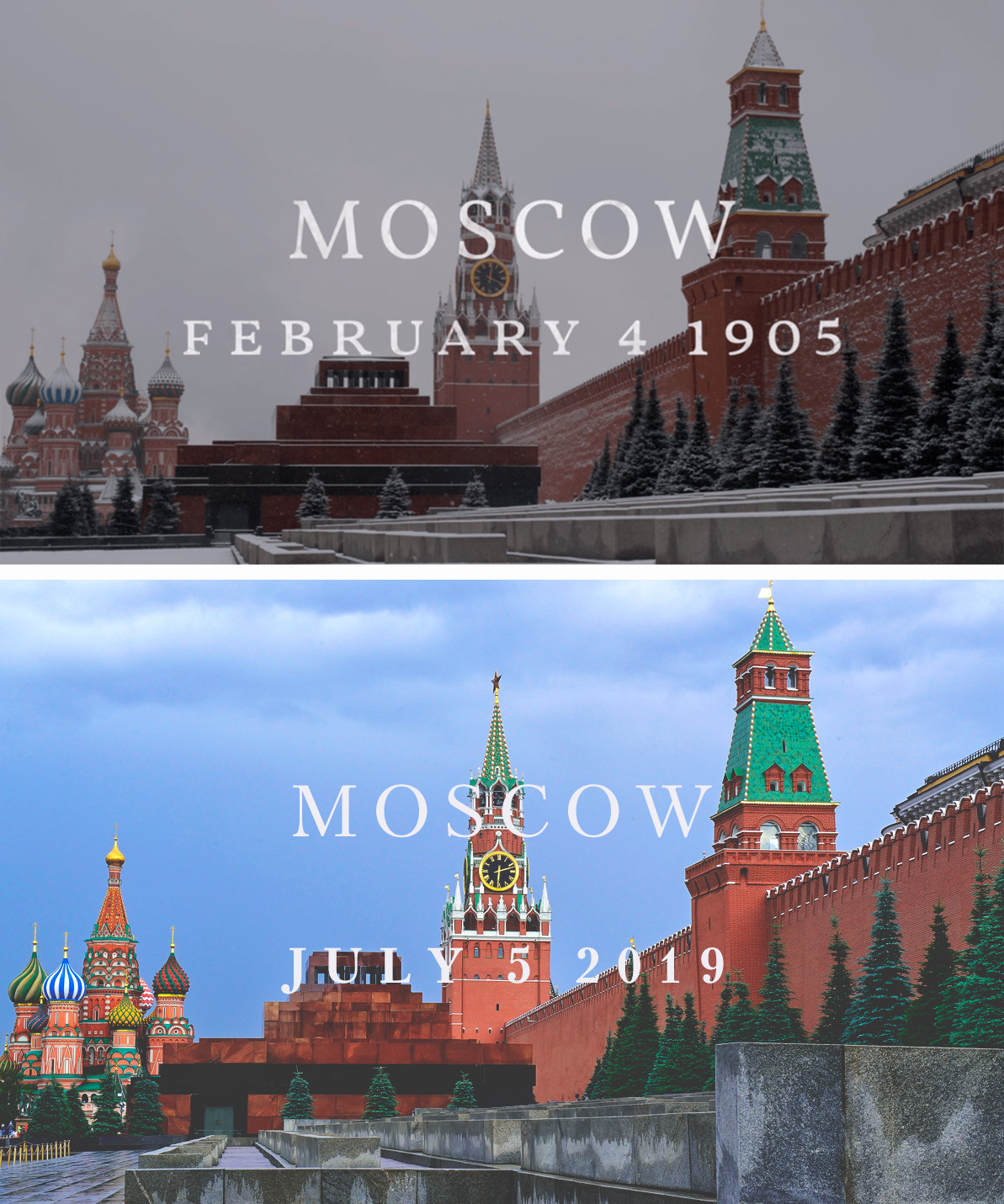 The above part is The Last Czars' actual screenshot while the below part mocks it - 'nothing has changed in 114 years!'

never get a second chance to make a first impression. And the impression Netflix wants to leave you with is that of a historically accurate, show. But if the very first thing it gives you is a photo that says “1905” – but shows the Red Square with Lenin’s Mausoleum (Lenin wouldn’t be dead for another 20 years!) – you can pretty much kiss historical accuracy goodbye. The footage was likely bought via Getty Images. Why bother, after all, when there are hundreds of stock pics lying around online!

And if you thought this glaringly offensive rookie mistake was the show’s biggest eyebrow raiser – you’re in for a big surprise, as the show delivers blow after blow to the face of anyone with even a passing familiarity with Russian history.

This ultimately stupid Mausoleum from 1905 has all chances to become the show’s glorious emblem, as stupidity didn’t stop there. 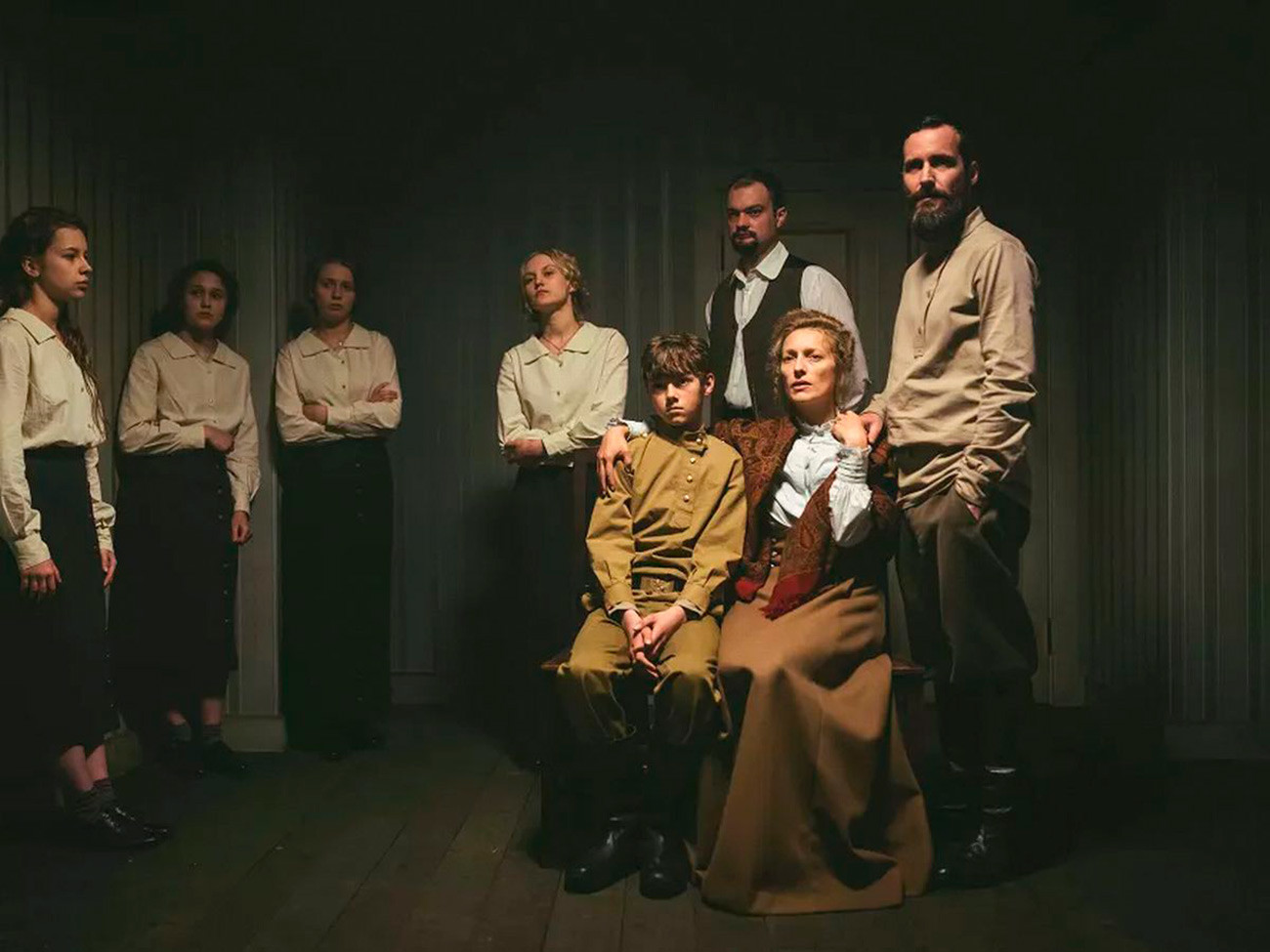 Last Czars is quite an ambitious project: created by Nutopia, a studio whose aim is to bring about “a new genre of television – the ‘megadoc’ – which combines epic cinematography and action-driven drama with high-end documentary,” the 6-episode series encompasses the entire reign of Nicholas II, the last Emperor of Russia, from his coronation in 1894 to his death by execution in 1918.

It’s not just among the most important moments in Russian history, but in the history of the world as a whole: the Russian Revolution of 1917 that crushed Nicholas’s Russian Empire led to the creation of the USSR. The world would have been a very different place had that revolution not happened: no global Communist movement and no Russian scarecrow looming over world. Adolf Hitler wouldn’t even have had the opportunity to play on those global fears… the list of potential consequences is long.

That is to say that the events preceding the revolution of 1917 are crucial to an understanding of modern history as a and extremely complex, so depicting them in popular entertainment was always going to be a serious challenge. The Last Czars accepts that but fails miserably.

A plethora of mistakes

Let’s start with historical inaccuracies. The show does bust some popular myths – like the legend of Grigori Rasputin, the mysterious favorite of the royal family, and his supposed affair with Empress Alexandra. However,  while denouncing those legends, there are glaring inaccuracies that effectively nullify every effort at making a historically accurate show. There are a thousand of those paper cuts scattered throughout.

Even for an amateur historian like myself, there’s just no ignoring these mistakes. The narrator refers to Duma as “the elected government,” though it is a parliament – a different branch of power. Had the creators so much it, they would have found that our current parliament carries the same name!

Even a more irritating and absurd mistake occurs when the narrator calls Anastasia and Milica, the daughters of the Montenegrin king living at the Russian court – “Black princesses,” a nickname that never existed. It seems that the authors simply confused the Russian word (black) with Chernogorskiye (Montenegrin), which makes me wonder if they ever consulted a single Russian-speaking person (let alone historian) while making this ‘megadoc’. Such flagrant disregard for something so basic is, frankly, astonishing.

At times it feels like The Last Czars just throws in unlikely scenes just to sex the show up a bit, like Rasputin trying to seduce Prime Minister’s daughter, or Nicholas’s daughter, Princess Maria, making out with a Bolshevik guard. A devoted revolutionary Ivan Kalyaev, described as a highly intelligent person, screams “F*ck the Czar!”, before being shot. Firstly, in reality, he was hanged. Second, the lexicon of Russian intelligentsia back then would simply not have contained such expressions. But who cares? Even the royalty throw around ‘f*cks’ and ‘sh*ts’ all over the place. (As a matter of fact, so did I, while watching this show). 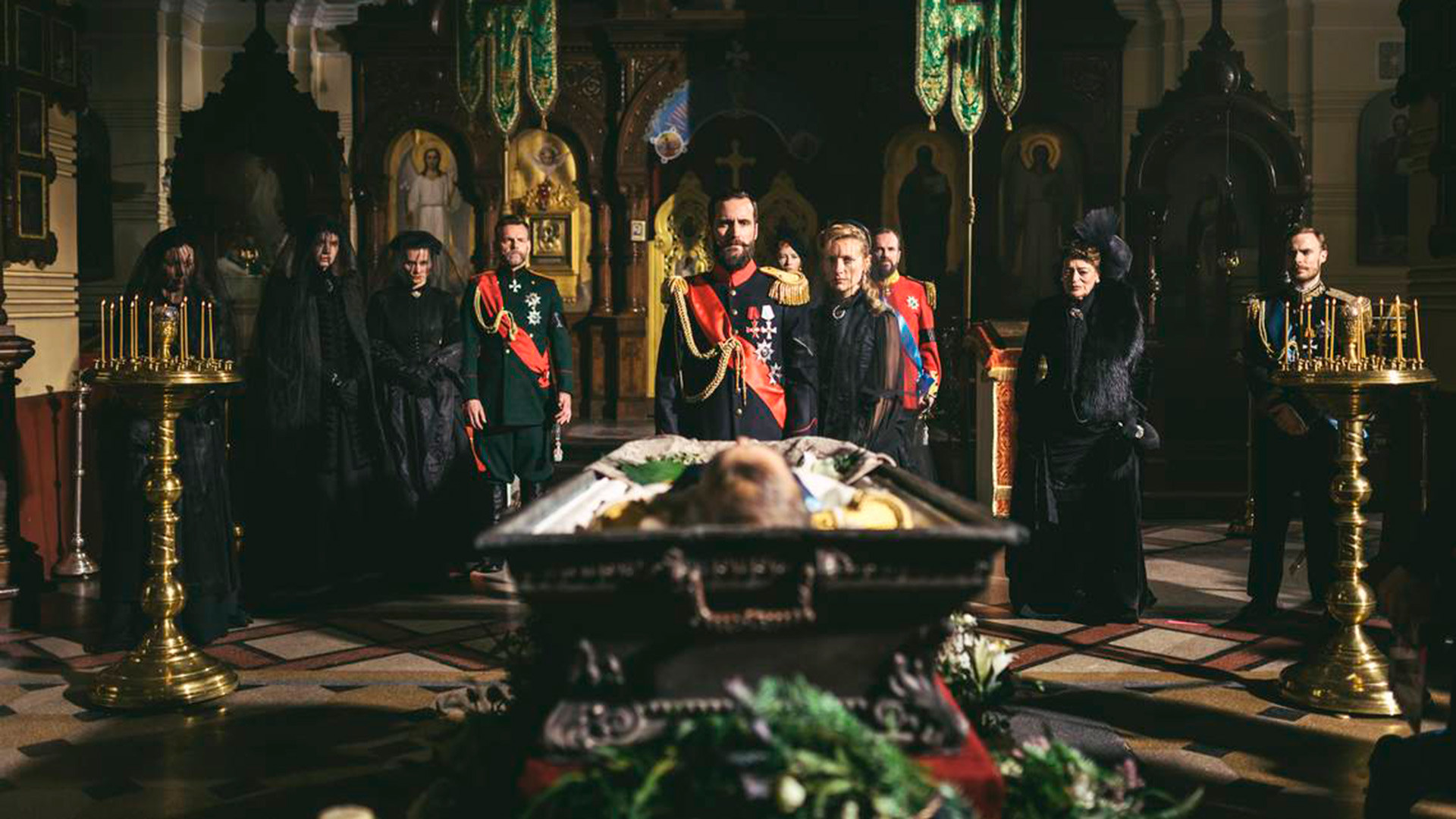 The Last Czars ends up being poisoned by what is meant to be its main advantage – the format. The show attempts to combine the tale of Nicholas’ reign, where he, his family, Rasputin, and all other important historical figures are portrayed by actors, with a talking-heads style show, where a bunch of Western historians, led by Simon Sebag Montefiore author of The Romanovs 1613–1918), provide the audience with a bigger picture of what was happening in Russia.

The aim was to kill two birds with one stone, making the story look like a sort of Game of Thrones with loveable characters, sex, and violence (sorry we had no dragons in the Russian Empire), and something educational and serious all at once. What we have as a result is a scene with Nicholas making passionate love to his wife (or Rasputin just screwing everything with a heartbeat) followed by Montefiore’s head talking about Russia sinking deeper into economic turmoil. These two worlds just don’t work together, making the narrative too fragmented and chaotic. 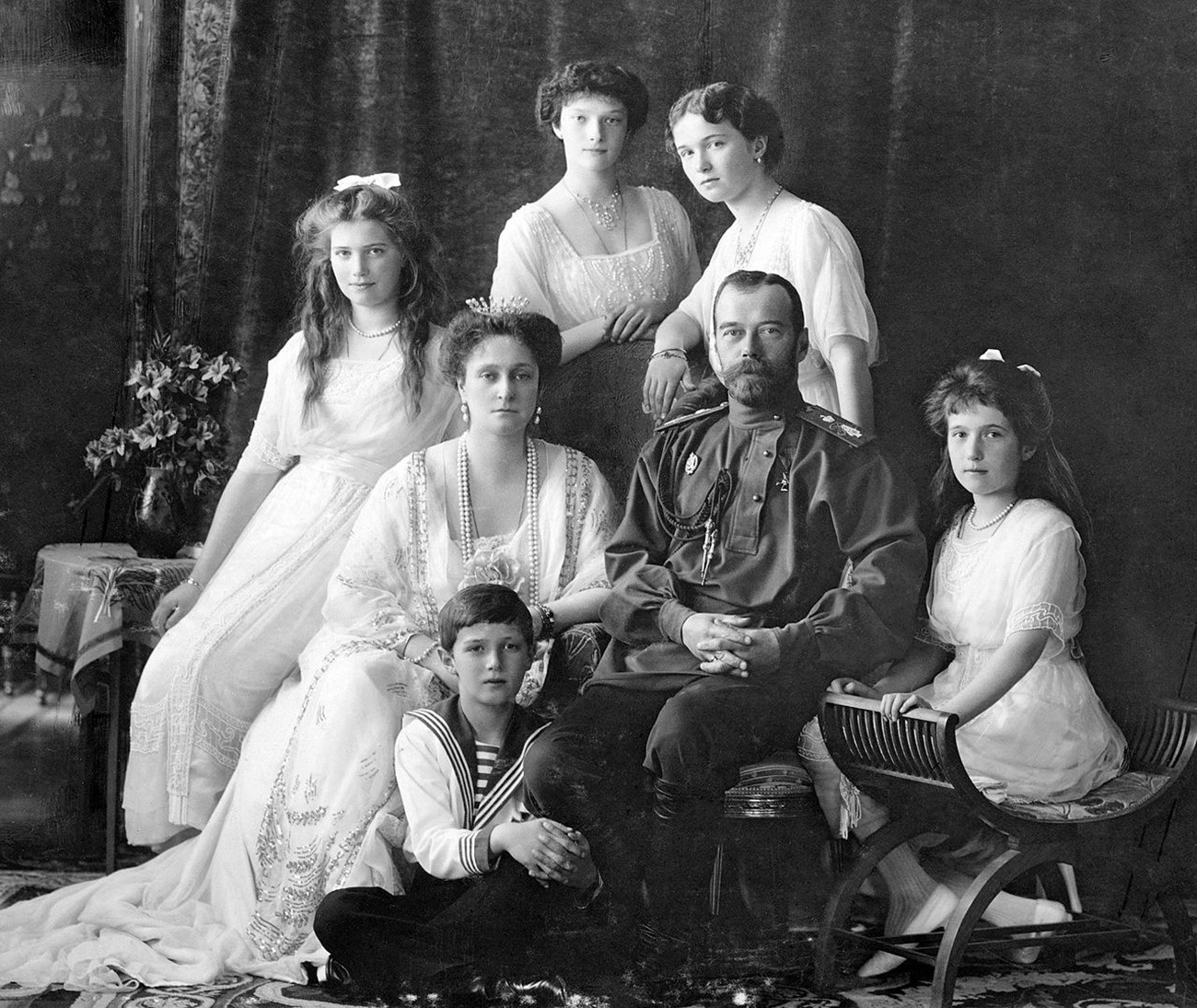 Netflix’s series contains a lot of what we in Russia call (“cranberry”) – deeply stereotypical portraits of Russia, its people, and the circumstances they live in. Peasant life is depicted as a Disneyworld paradise; the capitals are graced with palaces drowning in gold and jewels; the bad Russians (mainly Bolsheviks), drink a lot – and so on. Come on, guys, we would really have liked to see something new by now.

Also, the show just can’t bear the weight it heaped on its own shoulders, trying to explain the most tragic ending of a European royal family in just six episodes. Important figures are oversimplified and cartoonish: ‘a good Romanov democratic adviser’, ‘a bad Romanov autocrat adviser’, ‘a ruthless revolutionary’.

If there is one good thing about The Last Czars, it is the attitude the authors take toward its heroes: they portray Nicholas II as a well-intentioned, yet weak man, tragically unfit to rule the country. The authors sympathize with his family, but also with the people who can’t stand their incompetent rule anymore. Even Yakov Yurovsky, the Bolshevik who orchestrated the execution of the royal family, is shown as a man of honor and principles. That was the most tragic thing about the Russian Revolution and the Civil war – there were good people on both sides, but the age they lived in turned them into ruthless enemies, killing each other without mercy. In my mind, this is where The Last Czars succeeds.

Nevertheless, my overall score still stands at ‘very poor’. Numerous historical inaccuracies, general sloppiness, as well as its attempts to succinctly tell a very long and complicated story just killed what was a good idea. Let’s hope the future will see authors, foreign or Russian, learn from these mistakes in order to treat this epic and horrible period with the respect it deserves.

To find out more about mistakes made by The Last Czars, read our ultimate guide where they (all 48 of them!) are listed.

Also, check out our gallery to compare the actors with the actual historical figures they portrayed.