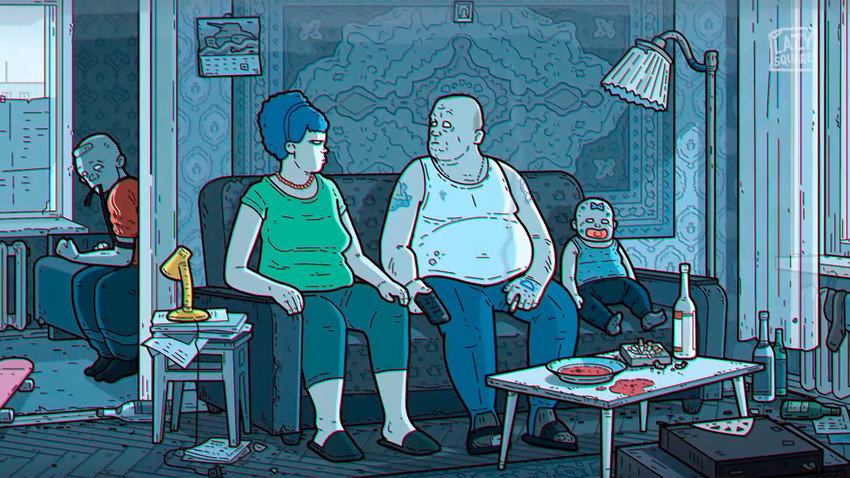 Lazy Square
As well as rethinking The Simpsons, Alexei Semenov has made trash animations about Barack Obama, The Terminator, Pennywise the clown, and even an existential video about his own thirtieth birthday – each lasting less than 30 seconds.

Moscow designer Alexei Semenov makes super-short trash animations inspired by American pop culture. He publishes them on YouTube under the name Lazy Square, where he uploads real and joke advertising videos. It is the latter that have brought him more fame.

His latest work – which gives the legendary Simpsons a dose of Russia reality – became an online hit. The short clip (entitled “The Simpsons. Russian Art Film Version”) features a Russian “Lisa” who plays the saxophone in a dingy underpass, a “Bart” reimagined as a Russian “gopnik,” a “Homer” who works as a security guard, and a “Marge” who cusses like there’s no tomorrow. As for how it ends, see for yourself. Semenov’s longest work to date, it lasts… just over a minute. As the name might suggest, Lazy Square prefers the super-short format.

Semenov creates the videos all by himself. Meanwhile, his main business is Serious About, which he runs with his wife. Under this brand, they sell designer badges and other eye-catching trinkets. It was for this project that Semenov first started making animations. For example, here’s an ad for a sex doll sold by Serious About.

Animation soon turned into a hobby. Before the arrival of The Simpsons, his most popular video was Terminator 2½ – about a liquid robot in the form of a killer spoon.

The average video takes about six weeks to make. He currently has no plans to up the tempo due to his “universal laziness.” On the occasion of his 30th birthday, Semenov shot a 30-second video about his life thus far, tellingly named “30 wasted years.”

“Ever since childhood, I had no goals, didn’t do anything, didn’t aim for anything, blew a couple of talents, f***ed up a few opportunities. I was a drifter, like lots of others judging by the comments,” he once said in an interview.

He says he has no interest in promotion or attracting clients, and just draws what he wants. His main sources of inspiration are usually old Hollywood films like It or A Nightmare on Elm Street, and U.S. pop culture, especially animation: The Simpsons, Family Guy, Futurama, South Park. “But it was Rick and Morty that totally shook up my mind. The darker and edgier the humor, the better,” recalls Semenov.

Semenov also made an ironic ad for NASA and imagined what Barack Obama did on his first day after leaving the Oval Office:

Superheroes, too, have been given the Semenov treatment. Meet Tomatoman, who extracts ketchup from near empty bottles, and Mr Tea Bag, who solves humanity’s second most urgent problem – pulling tea bags out of mugs when the string and label have gone overboard.

On the Russian theme, besides The Simpsons, there is a short “comedy” about out-of-town residential developments. In it, a “happy” mortgagee regurgitates standard marketing slogans about the “benefits” of such housing before opening a window and... It’s pretty clear even if you don’t know Russian.