How did the Soviet economy work and why did it fail? 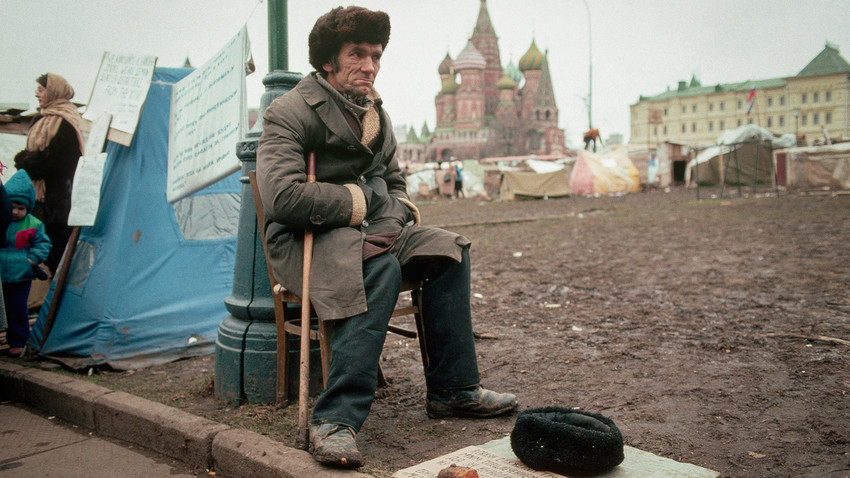 Getty Images
The Soviet economy was the second largest in the world, but long queues and empty store shelves are the main things many people remember about it. Goods were cheap but there were constant shortages. Let’s find out how this was possible.

The Soviet Union lasted for 69 years, and for practically all that time it had no market economy in the usual sense of the word. Instead, there was a planned economy. Everything was produced according to a plan: nails, underwear, toilet paper, residential buildings, milk and cars. Everything. How was it possible to plan everything in the largest country in the world?

The truth is it wasn't. All those plans made out of hundreds of cross-sector balance sheets and spread out on tens of thousands of pages throughout multiple regions did not even correlate with each other in many cases. And yet experts thought the state was keeping afloat and would last even longer.

The key word is plan

If the concept of the Soviet economy had to be explained in a single word, that word would be Gosplan, which means “the State Planning Committee” in Russian. It was Gosplan that decided what all the factories and enterprises in the country would produce and in what quantity. What did that mean in practice? For example, every morning the minister in charge of transport engineering would receive a report on how many railway wheels needed to be made and took measures to make sure that by the end of the month the plan was met. Further down the hierarchy, factory directors and shop managers did the same. 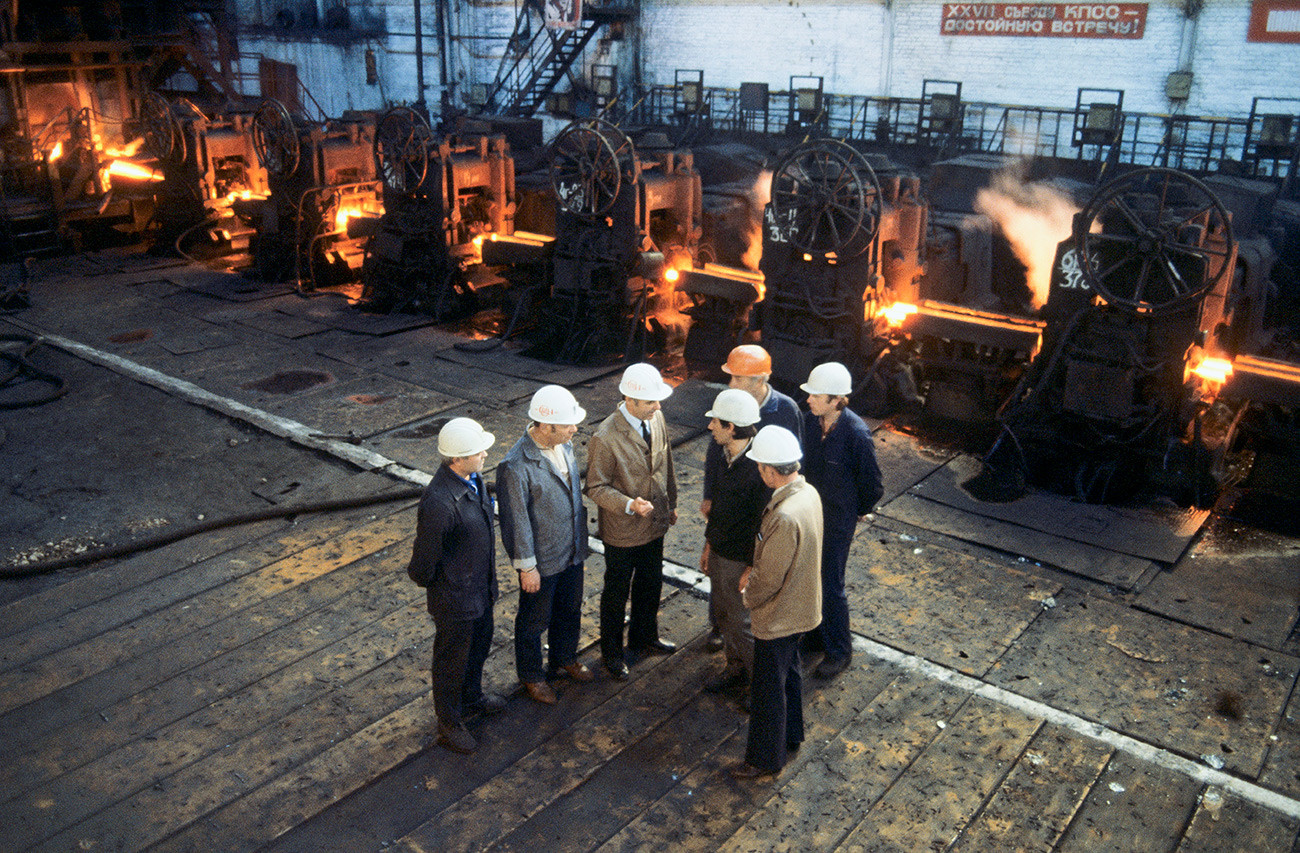 The problem with Gosplan was that it based its calculations not on the needs of real people but rather on Soviet bureaucrats' idea of what needed to be produced, says RANEPA economist Nikolai Kulbaka. Also, it did not take it into account that people's needs change from time to time: "For example, I once came across an expensive men's suit that had mysteriously found its way to a mountainous Tajik village, and was available there only in one, albeit popular, size," he recalls.

Industry was the main engine of economic growth, but the Soviet system existed in constant anticipation of another war. This meant that heavy industry—the defense industry, ferrous metallurgy and anything else that would help win a war—got priority and accounted for a significant portion of the country's GDP. This just did not leave much room for the production of ordinary consumer goods.

Try to estimate how many socks, boots, bars of soap or colanders Soviet citizens might need. You probably won’t guess right. And the Soviet Union didn't either. Economist Ludwig von Mises cut right to the point back in 1920: Where there is a planned economy there are shortages. The market economy model of demand regulating supply simply did not exist in the USSR. 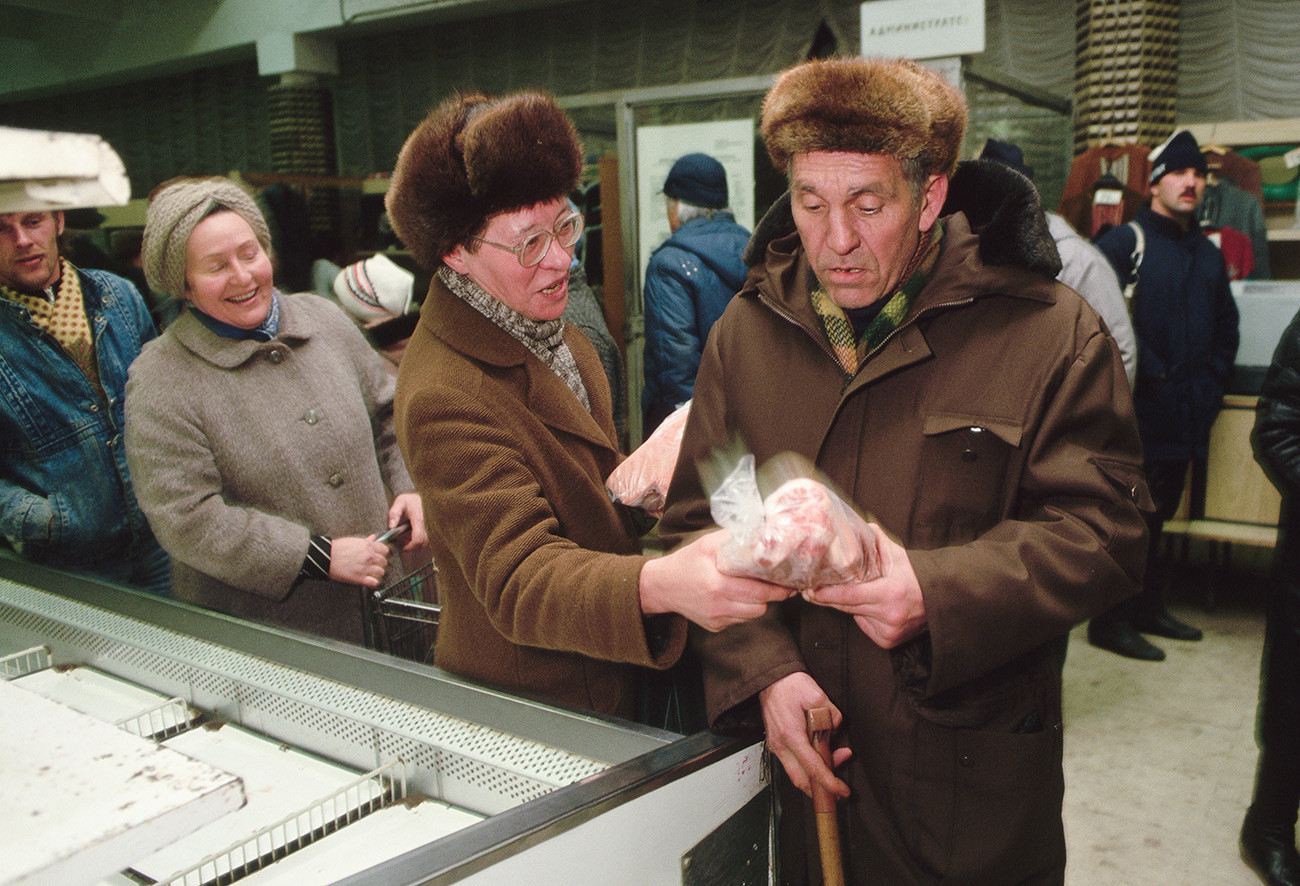 Goods went on sale at fixed prices and were not available everywhere. Some goods were even sold at a loss because that was the price Gosplan had once set for them at some point. Cities were divided into different categories: some were first to receive goods, others last.

Usually Moscow had if not everything then at least quite a few goods on sale, so people from the rest of the country flocked to the capital to do their shopping. In 1939, for example, the NKVD security service reported that thousands of people had gathered outside all of the city's main department stores: "In the early hours on April 14, the total number of customers gathered outside the stores by the time of their opening was 30,000 people. On the night of April 16-17, the figure was 43,800."

To be fair, this state of affairs, which could best be described as a national disaster, was not always the norm (the same could be said about rationing). A similar situation developed in the 1980s, when people from nearby towns came to Moscow on so-called "sausage" commuter trains to buy sausage in the capital since it was not available elsewhere. The reason behind this mess was that by the end of the 1980s the USSR produced some 25 million types of products, but by that time no one understood how to plan production and distribution from one center. 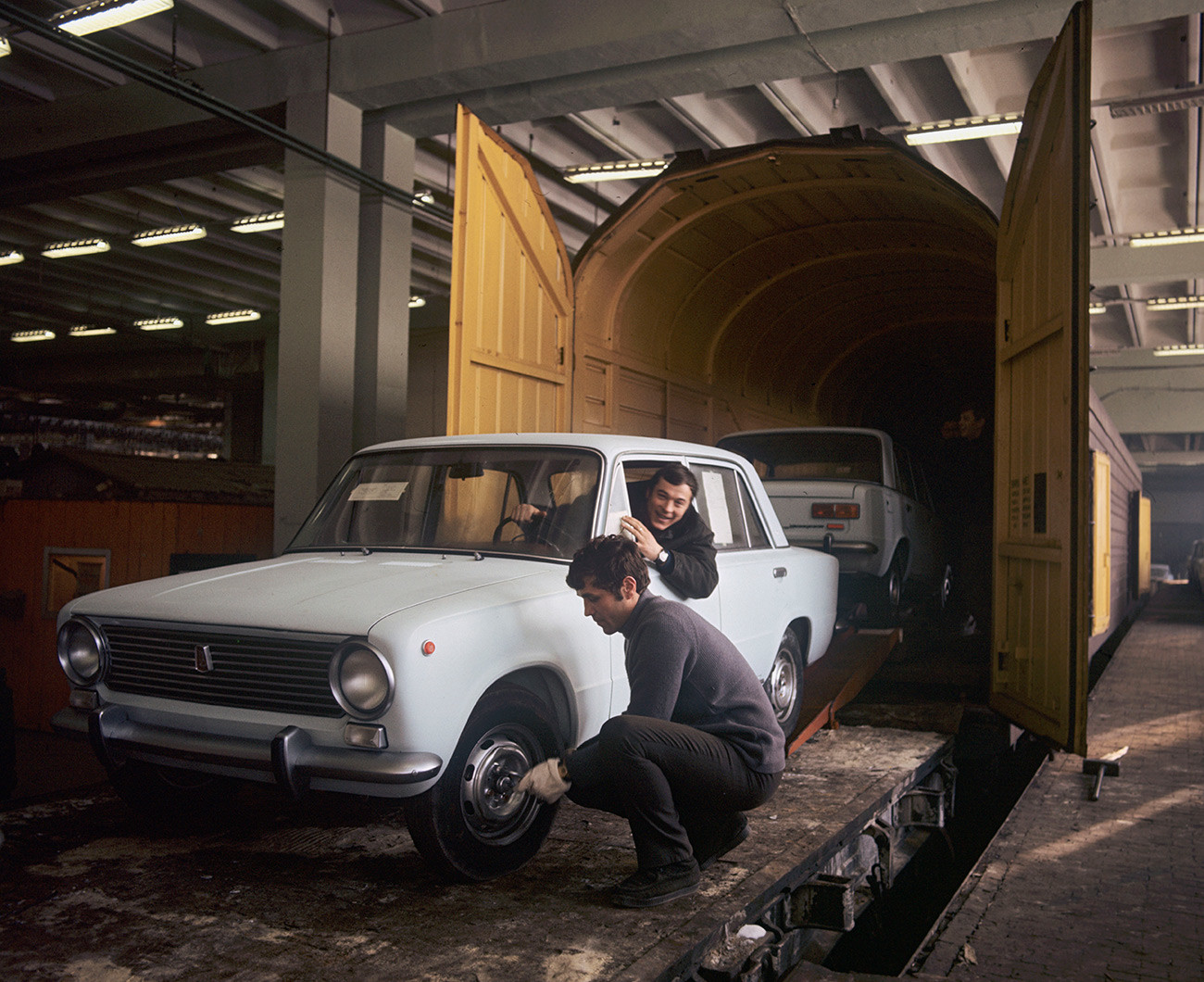 Between these two extremes, shortages were moderate. People bought what was available, without much choice, and at any cost. People in the Soviet Union had no shortage of money. In fact, they often earned more than they were actually able to spend because goods simply were not freely available. Only 14 percent of goods were sold in shops, while the remaining 86 percent were distributed through the controlled economy.

To buy a car legally, for example, you had to spend seven or eight years on a waiting list. So if you wanted to get one without the wait, this had to be done illegally on the black market. The main problem was that even the opportunity to get on the waiting list was not open to everybody since you were only eligible as an employee of an enterprise. Other goods that were distributed among employees of certain enterprises, research institutes and so on, were made available sooner to those who were good in the books, i.e. loyal to the state.

Meanwhile, enterprises themselves could never go bankrupt. It was simply impossible. The first bankruptcy law was abandoned back in 1932. Instead, state ministries redistributed funds from profitable enterprises to unprofitable ones—ones that sold their products at unfeasible prices or could not sell anything at all while their goods sat gathering dust in warehouses. This practice may have wiped out any sense of initiative, but there was no other option because no one wanted to be accused of industrial sabotage. Those who were charged with this crime under Article 58-7 of the Criminal Code could be imprisoned, have all their property confiscated, be expelled from the country or even be sentenced to capital punishment and shot.

When everything fell apart

Was the country's political leadership aware of all those flaws? Judging by the fact that in the 1930s the USSR began selling anything to the West that could be sold, from grain and furs to museum masterpieces and often at excessively low prices, yes, they were. The country needed outside loans and foreign currency. 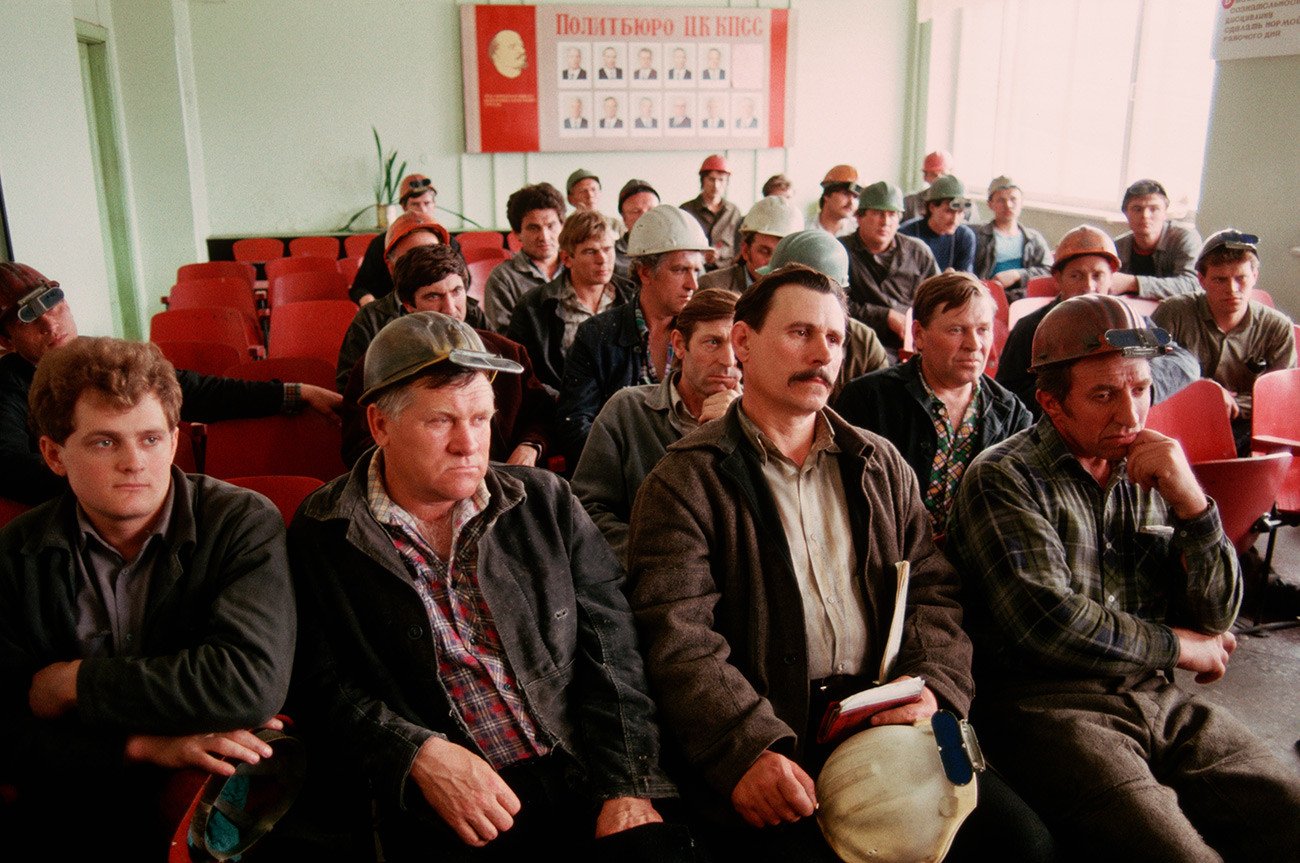 In the end, the Communists became hostages to their own ideology since, according to Marx, competition leads to crises. Furthermore, they could not allow competition because of limited resources. In 1987, consumer goods made up only 24 percent of the output produced in the country. Everything else was eaten up by unprecedented militarization.

The realization that the system was bursting at the seams first showed up in the mid-1960s. Pravda newspaper published an article under the screaming headline "Open the safe with diamonds" suggesting that the main criteria for enterprises should be profit and profitability. Alexei Kosygin, the chairman of the USSR Council of Ministers, masterminded the reform. And it worked, bringing effective results: the national income increased by 42 percent!

But in the end, opponents of market reform had the upper hand. The Prague Spring of 1968, which had frightened the Politburo, played its part too. In the end, everything went back to the way it used to be. "My friends and I thought that a crisis was about to come, and the Soviet Union would have to reform. But that did not happen," says Higher School of Economics academic supervisor and former Economic Minister Evgeny Yasin.

"In 1973, OPEC was created, and OPEC decided to quadruple oil prices in a year. The Soviet Union began to receive revenues from oil, and the Soviet system continued to exist, thanks to the oil fields that were discovered in Western Siberia in 1967–1968," Yasin recalls.

What happened afterwards—i.e. a complete collapse of the system—came as the result what economists call "a perfect storm” of a unique circumstances: "Weak economic fundamentals, negative economic conditions at home and abroad, and the presence of leaders who were ready for changes in the system," according to Paul Gregory, a professor of economics at the University of Houston. "Had one of those factors been absent, the collapse of the USSR could have happened later or not at all."