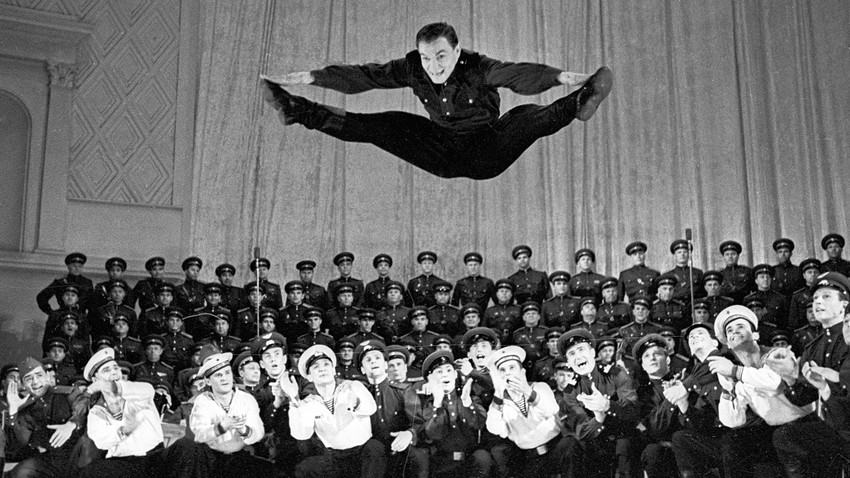 A performer from the Alexandrov Ensemble, giving zero damns about the gravity.

Boris Elin/Sputnik
Ever seen the Soviets play ‘Dance Dance Revolution’? You’re about to...

In August 2019, the Internet became a much better place – the account soviet soldier dancing appeared on Twitter. There is nothing there but real footage of the Red Army soldiers (the dance section of the Alexandrov Ensemble also known as the Red Army Choir) dancing combined with contemporary pop and rock music. And it’s absolutely amazing.

Here is our choice of the best compilations:

The account went viral after this one (its owner definitely loves The Killers: there’s more of their songs here than anyone else’s). Grief and jealousy can sure make a group of men do strange things...

Believe it or not, there was a lot of that in the Red Army too. Hey, fun has no gender!

Franz Ferdinand – Take Me Out

take me out - franz ferdinand pic.twitter.com/PnrDwBuYJs

Seriously, it doesn’t matter if the song is happy, like this Franz Ferdinand’s hit…

...or sad, like this song by Joy Division – the Red Army can dance to anything. Yes, it is exactly the same footage as in the Franz Ferdinand one!

But basically, it’s all about feeling good.

Just look at how passionately these two are going at it!

Dead or Alive – You Spin Me Round

you spin me round - dead or alive pic.twitter.com/TKIj3HLQ9c

You just know this track was made specifically for that occasion...

The Beatles – Back In the USSR

back in the ussr - the beatles pic.twitter.com/dxlG2mcaN5

And this one, too. What a time to be alive, when Western sound collides with Russian moves!