Global Look Press
The personal lives of members of the Romanov dynasty excite readers from many countries. But what was life like for ordinary people in the Russian Empire, be it a nobleman or a peasant? We’ve collected the most atmospheric books that give you an idea of this. 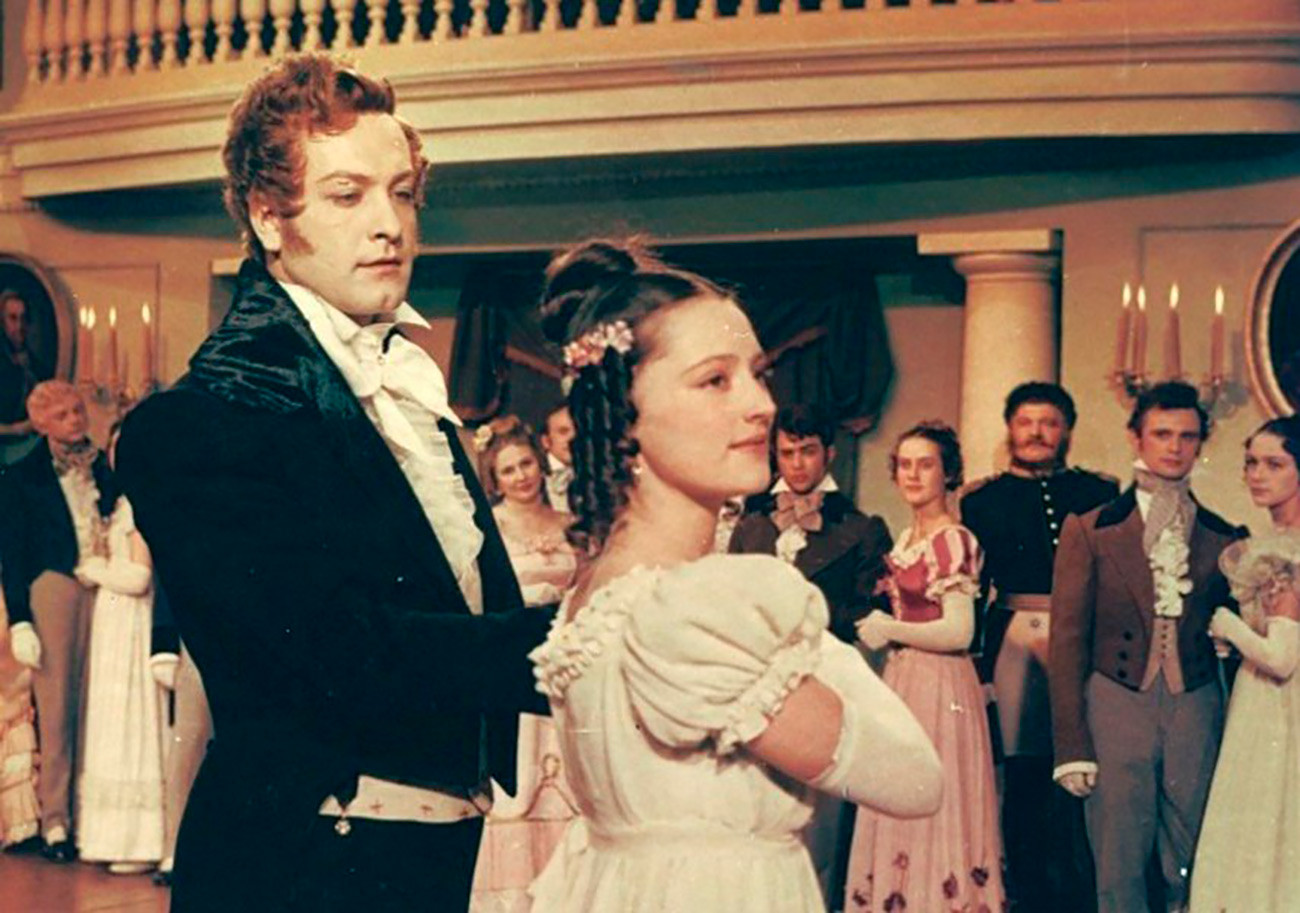 This novel in verse used to be called by Russian literary experts as the “encyclopedia of Russian life”. Indeed, one can find here descriptions of provincial landowners’ lives, as well as royal receptions and balls, theater nights in the capital and the delicate process of matchmaking. Pushkin also lovingly initiates a reader into the secret dreams of noble girls, and into the habits of cold-hearted high-society ladies, and even into the daily routine of a young dandy. 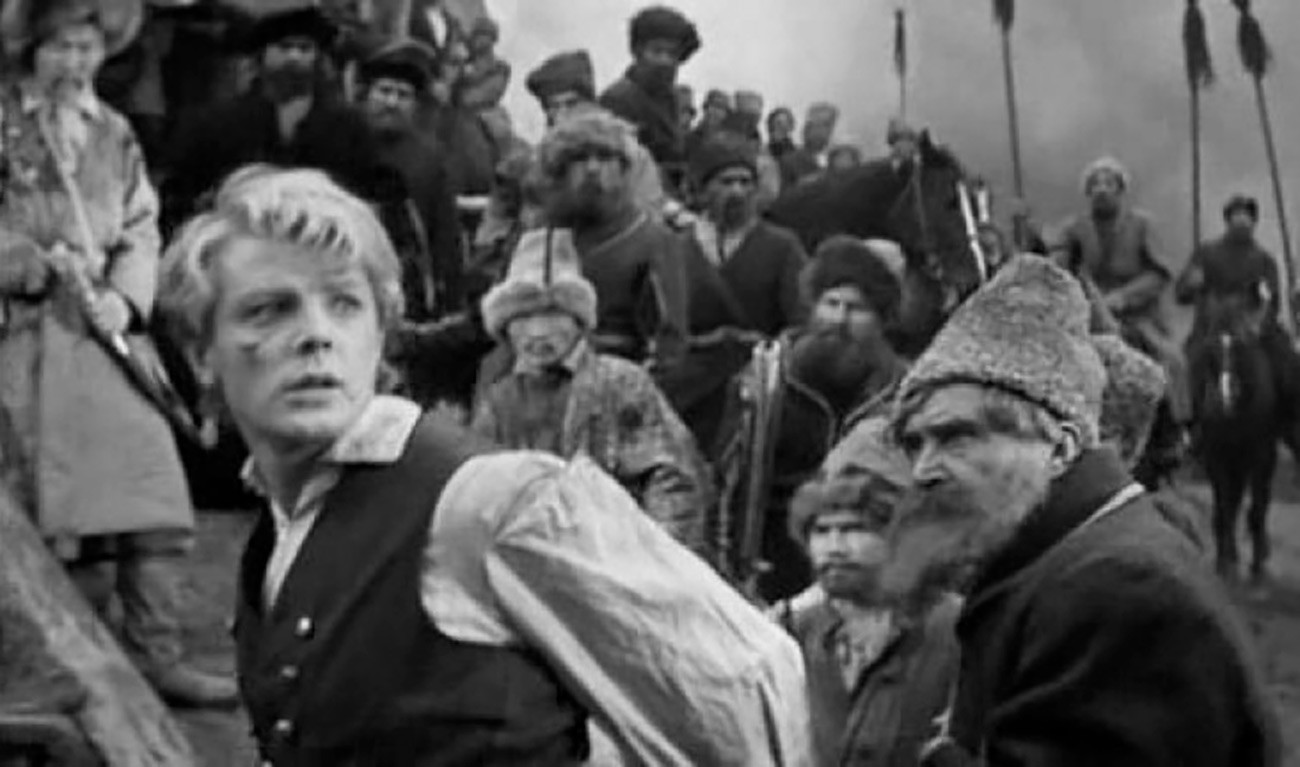 Still from 'The Captain's Daughter' movie

The story describes the historical period of the peasant uprising led by Yemelyan Pugachev, who considered himself to be a tsar. According to the plot, a young nobleman leaves his home to serve in a remote fortress along with the old servant who brought him up. First, the young rake loses a large amount of money in a card game, then he gave away his warm sheepskin coat to a stranger (as it later turns out, this reckless gesture saves the hero’s life), and then he takes part in a duel and is arrested by mistake as Pugachev’s spy.

The book describes life in a small fortress, an innocent love, a Russian uprising, which is  “meaningless and merciless,” and Catherine the Great - a strict but fair ruler. 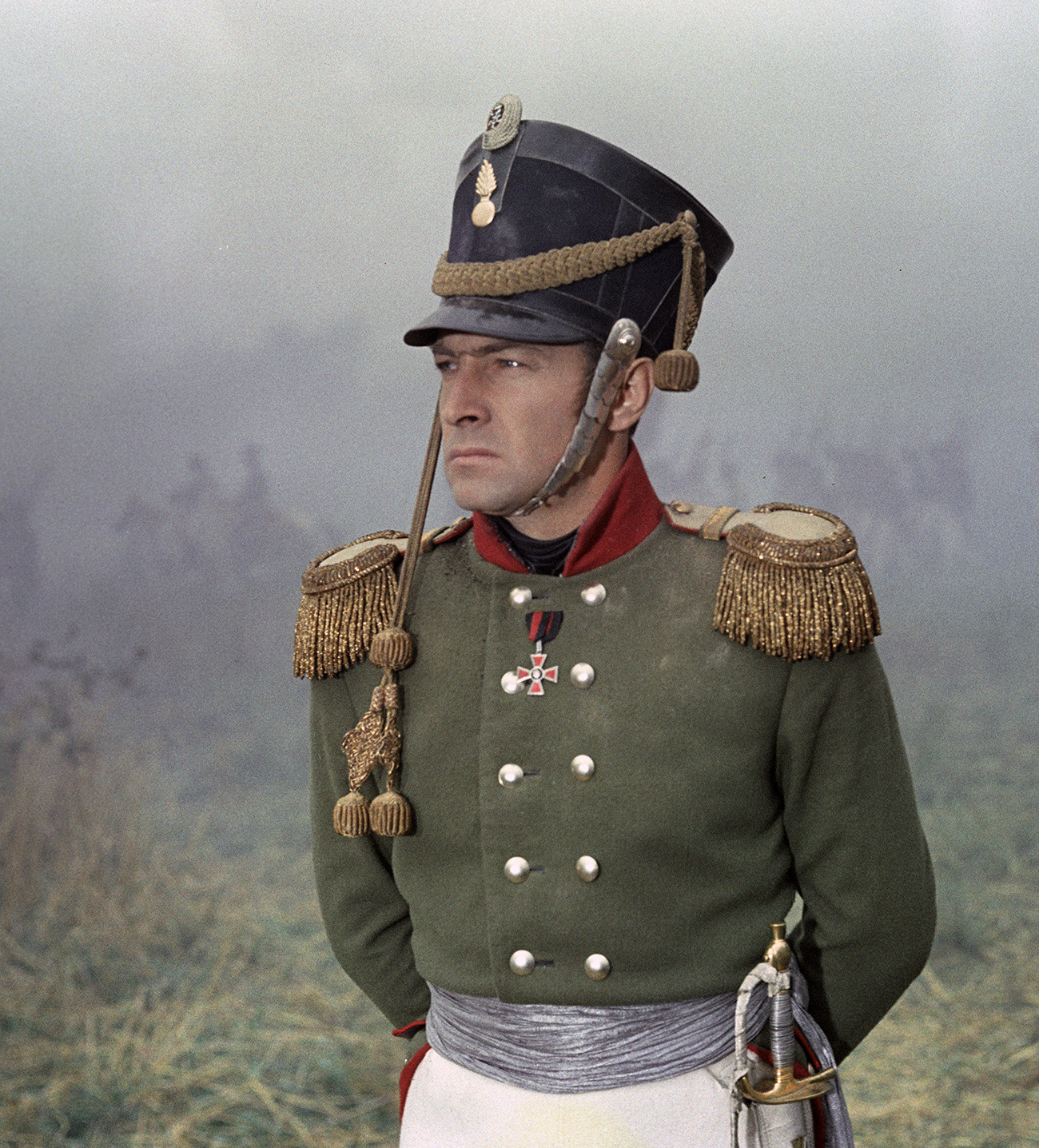 It is difficult to find a book that tells about Russian life more comprehensively. Here you can find descriptions of Moscow and St. Petersburg, as well as countryside life. Landowners, high society, peasants and the military - the writer seemed to have become accustomed to all of his characters and speaks on behalf of each of them.

Tolstoy describes a high-society salon, talks about politics, and concerns about the war with Napoleon. He does not spare words to show the battle scenes in detail or to provide conversations that warriors have in the trenches. Tolstoy makes it clear what it was like to be a hussar, drinking champagne and bringing a bear to a party. In general, it's all about entertainment, military and the social life of high society. 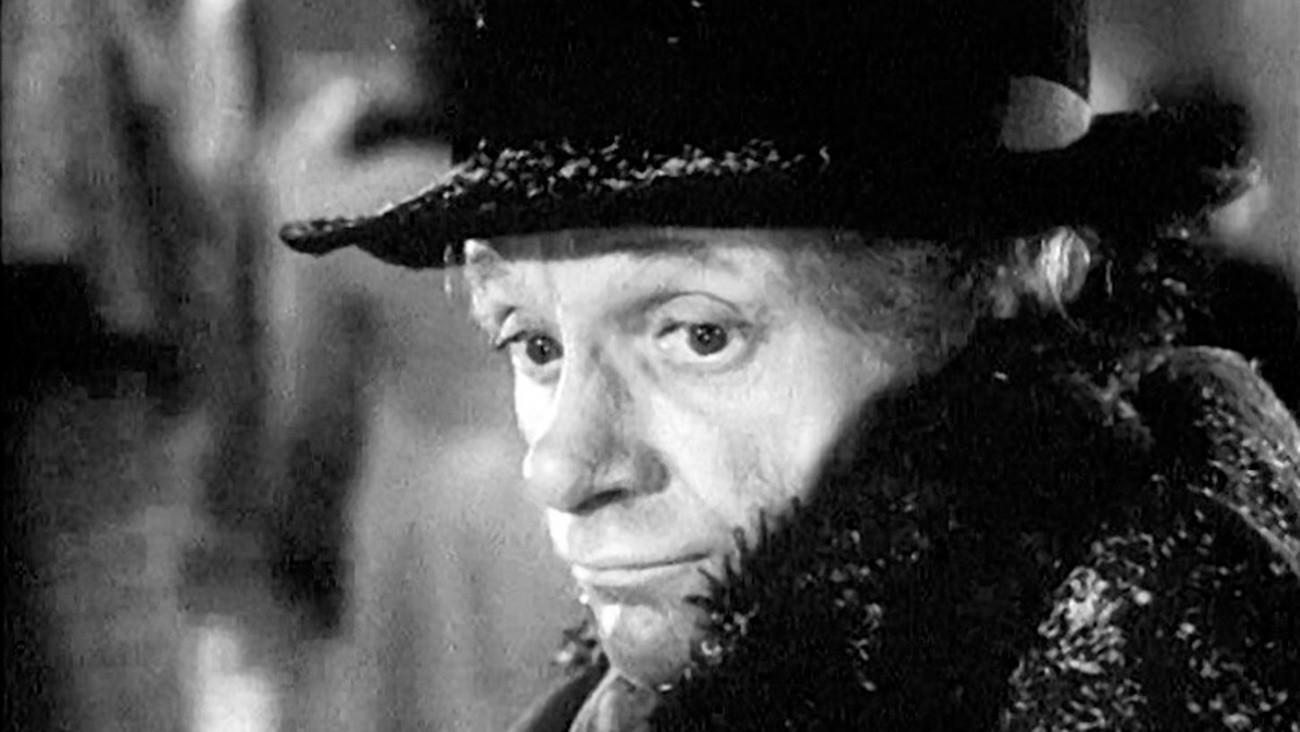 Rolan Bykov as Akaki Bashmachkin. Still from 'The Overcoat' movie

In his typical phantasmagoric manner, Gogol describes the life of a most ordinary person - a minor official, Akaki Bashmachkin, who lives in St. Petersburg. It is not hard to imagine how small is his salary since he has been wearing the same overcoat for many years. One day, the tailor says it’s no longer possible to mend it for the upcoming winter, and that Akaki needs another one to be sewn. This becomes a true drama for the hero, who then dedicates all his energy and money to obtaining a new overcoat, and when he finally gets it, he protects it as a most prized possession. Akaki is not married and doesn’t have kids - so just imagine what would be his financial situation if he had a family! 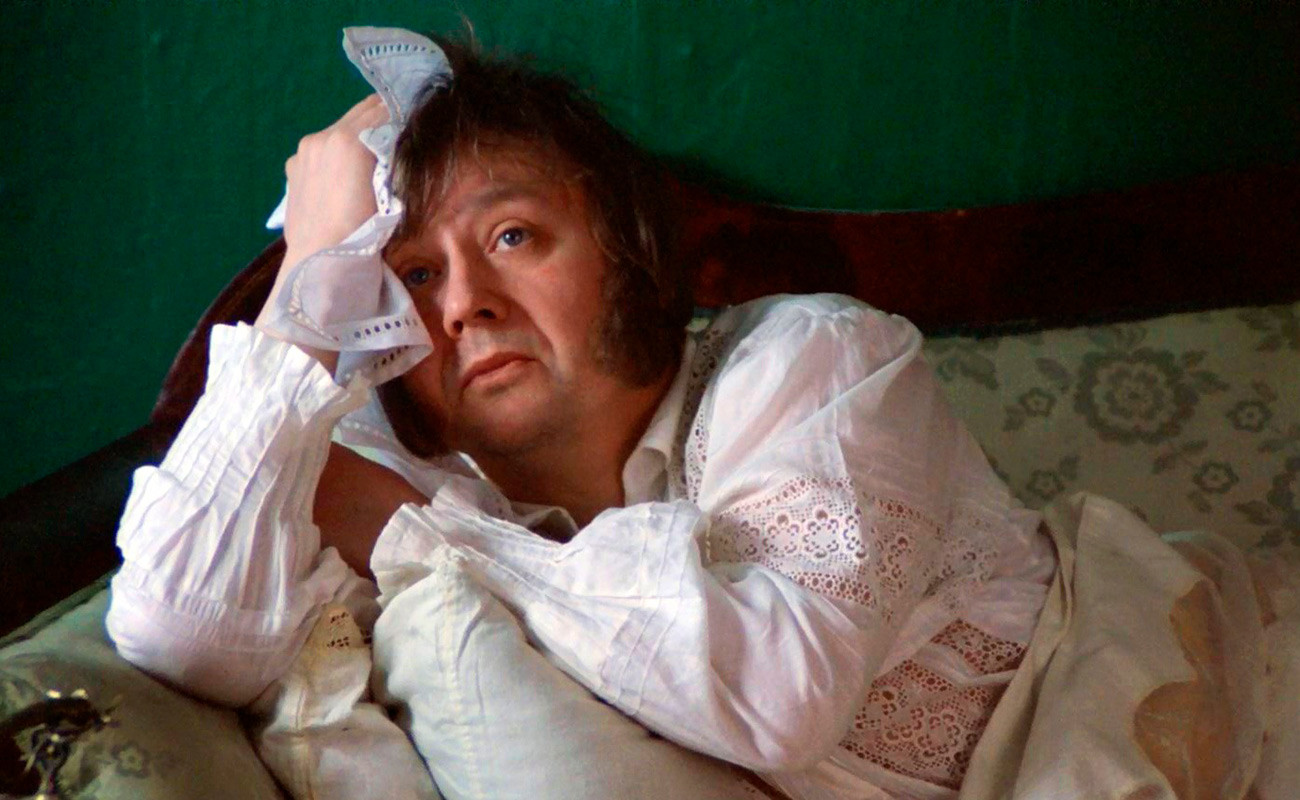 Oleg Tabakov as Ilya Oblomov. Still from 'A Few Days from the Life of I. I. Oblomov' movie

What if you could just lie on the sofa all day long and have no need to work! Everyone has probably dreamt about this. But how can a healthy adult man afford not to work? Well, actually he can. There were lots of such people in the Russian Empire. If you had an inheritance then you could live for yourself, organize balls and read books all day and every day. If you were lucky to have a country estate with serfs, then life was even better.

It turns out that only love can lift the character, Ilya Oblomov, off the couch, but just for a while. The novel tells about the idleness and feelings of an ordinary landowner-nobleman, and at the same time about ‘new people’ without noble origin, but who are active and energetic - the author clearly likes them more. 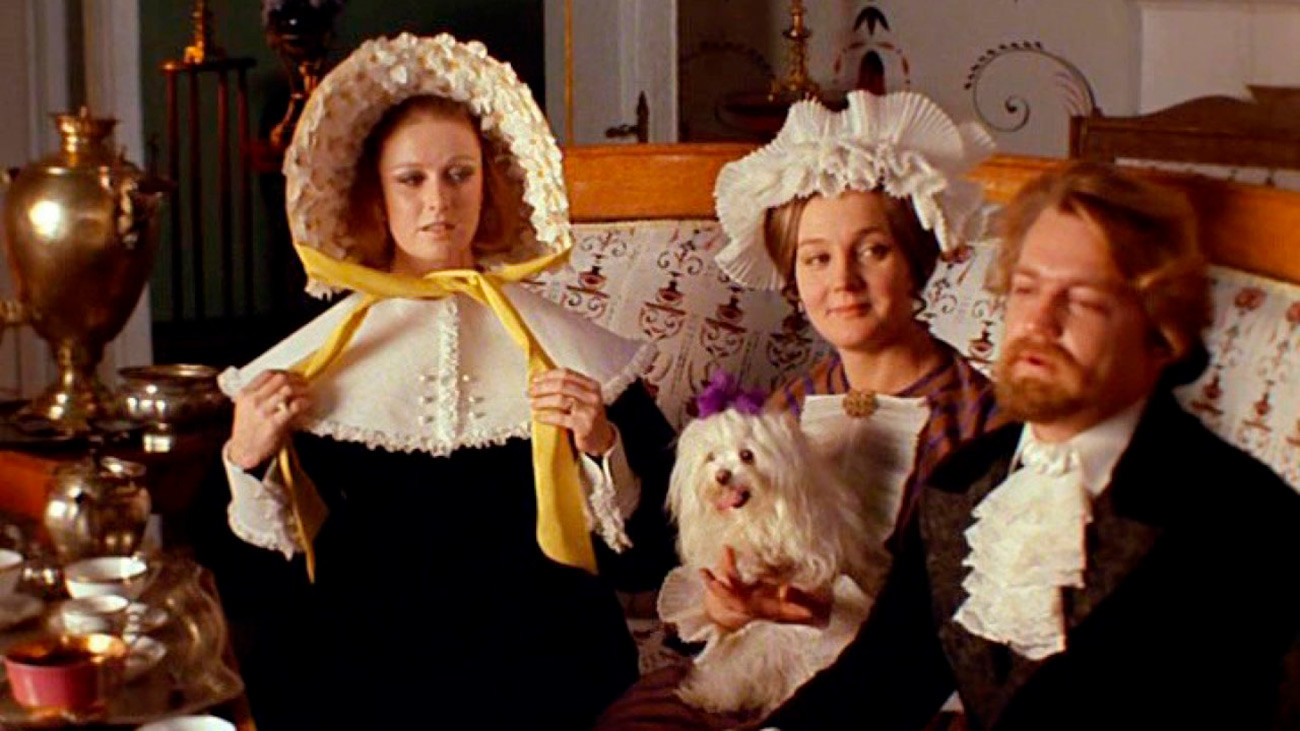 Still from 'The Noble Nest' movie

The novel’s title is now an aphorism: “the noble's nest” is an estate where a large noble family lived and which has been inherited. Moreover, it is a place of familial kinship, where children who flew out of the “nest” can always return.

In such noble houses there was always a certain traditional way of life and prescribed activities. Turgenev sadly noticed that this lifestyle was coming to an end: children no longer wanted to be landowners and own peasants; instead, they wanted to decide their own fate and no longer follow their parents' instructions and traditions. 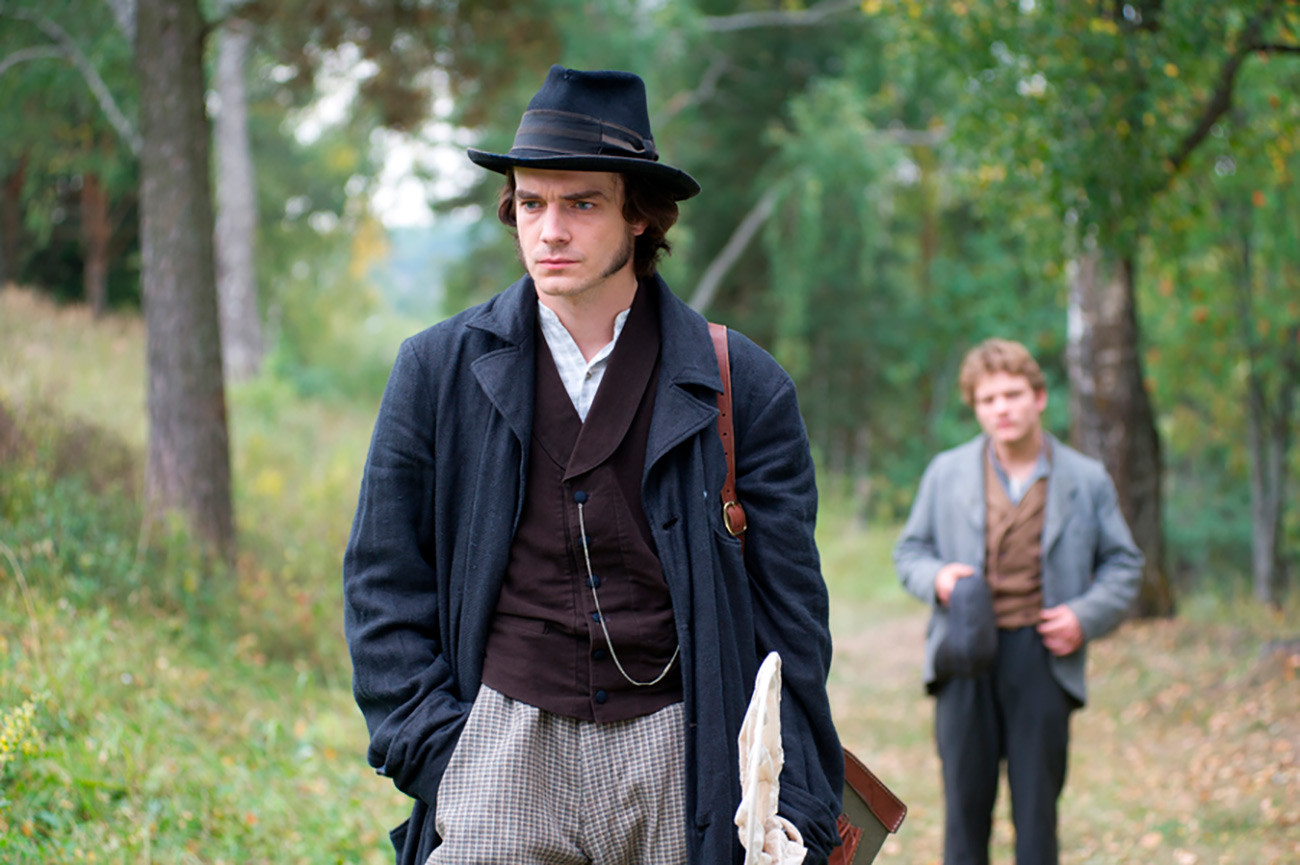 The deeply faithful Dostoevsky is interested in a new generation - the young people who grew up after the abolition of serfdom in 1861. They are revolutionaries who defy social standards. In this novel their harmful ideas are like demons that fly around and poison the minds and lives of ordinary people.

Nikolai Stavrogin, one of the main characters and a gloomy person, is a communist and atheist. He is an impudent guy and doesn’t care about the norms of behavior: he even openly conducts love affairs with unmarried girls, which was an unheard-of insolence for the 19th century. With his arrival from abroad a lot of misfortunes happen in a small provincial city: fires, duels, and squabbles.

Another revolutionary, the cunning manipulator Pyotr Verkhovensky, creates a secret society the main idea of which is that people are the bearers of God’s will (and not the tsar). To embolden the group, he organizes the murder of an innocent person. 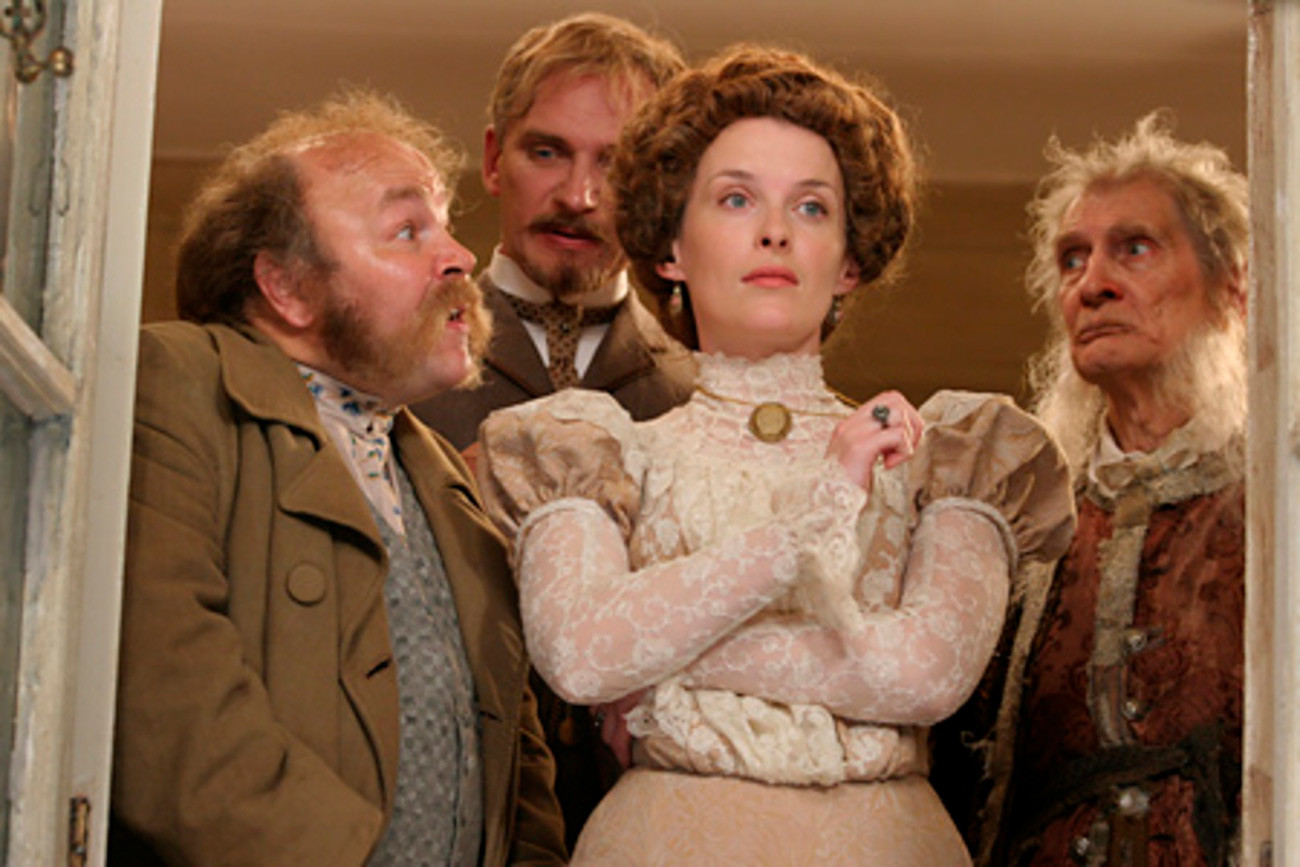 Still from 'The Cherry Orchard' movie

In “The Three Sisters” Chekhov depicts how the nobles are losing their estates and position in society, becoming impoverished. The “Cherry Orchard” shows a palette of nobles, both those who follow old-fashioned views and traditions, and the new ones: whether emigrant loafers or pioneering entrepreneurs.

From the early 20th century onward, people from the lower classes start playing a more important role in literature - servants, for example. They act like members of the family, although previously they did not have primary importance. 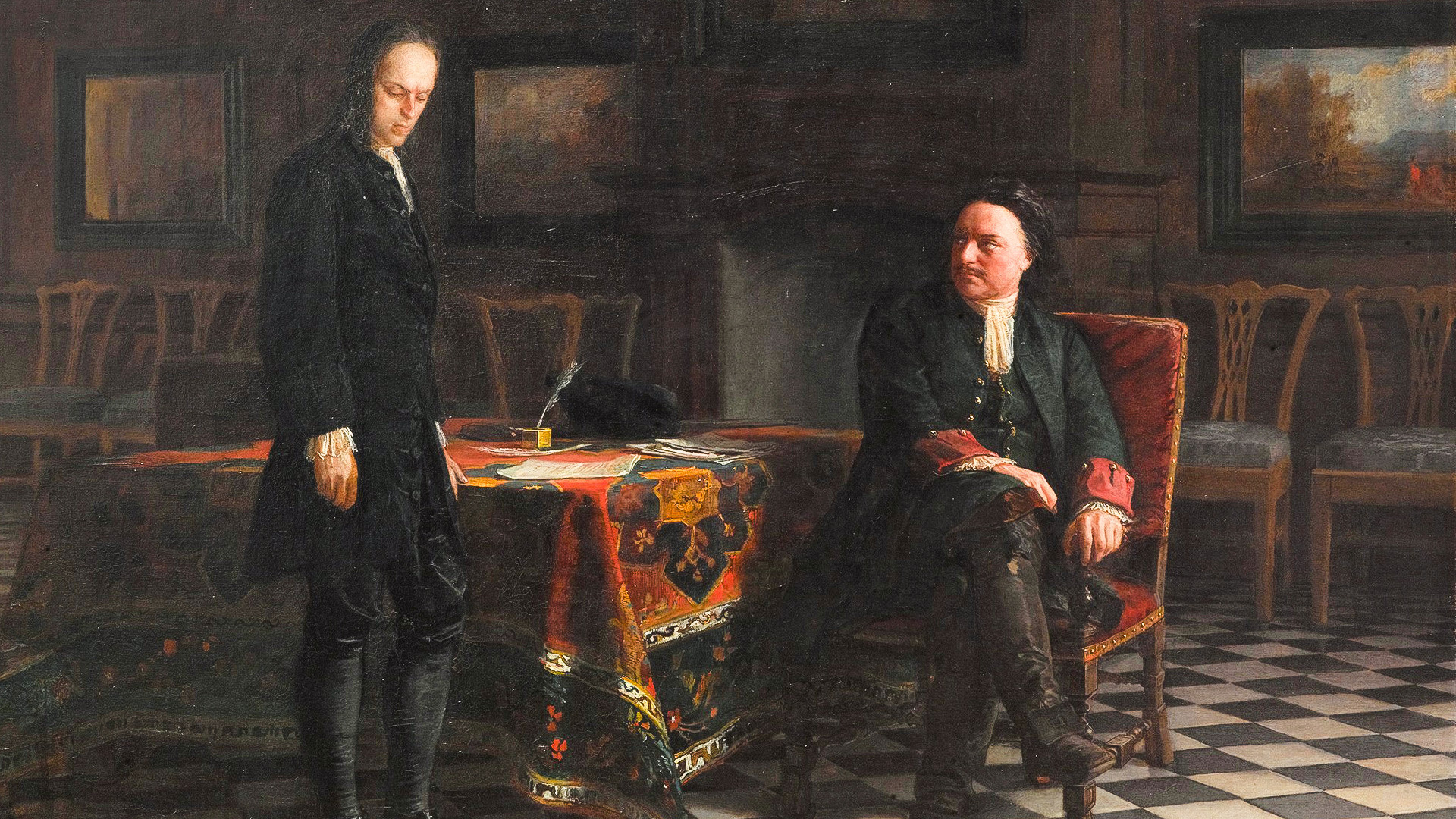 Peter the Great Interrogating the Tsarevich Alexei Petrovich at Peterhof, 1871

“Peter and Alexei” is the last part of the mystical trilogy, “Christ and the Anti-christ”, written by philosopher Merezhkovsky. Peter the Great decided to reform the church in Russia and bring it under state-control.

Pious Russians are shocked by how the new tsar acts in violation of centuries-old traditions. Both Peter's closest circles and the common people (including monks, runaway sailors, Old Believers and other marginalized people) - consider Peter to be the Anti-christ, and foresee the Apocalypse. The only one who opposes the tsar is his son, Alexei, who promises to return the true faith and church. 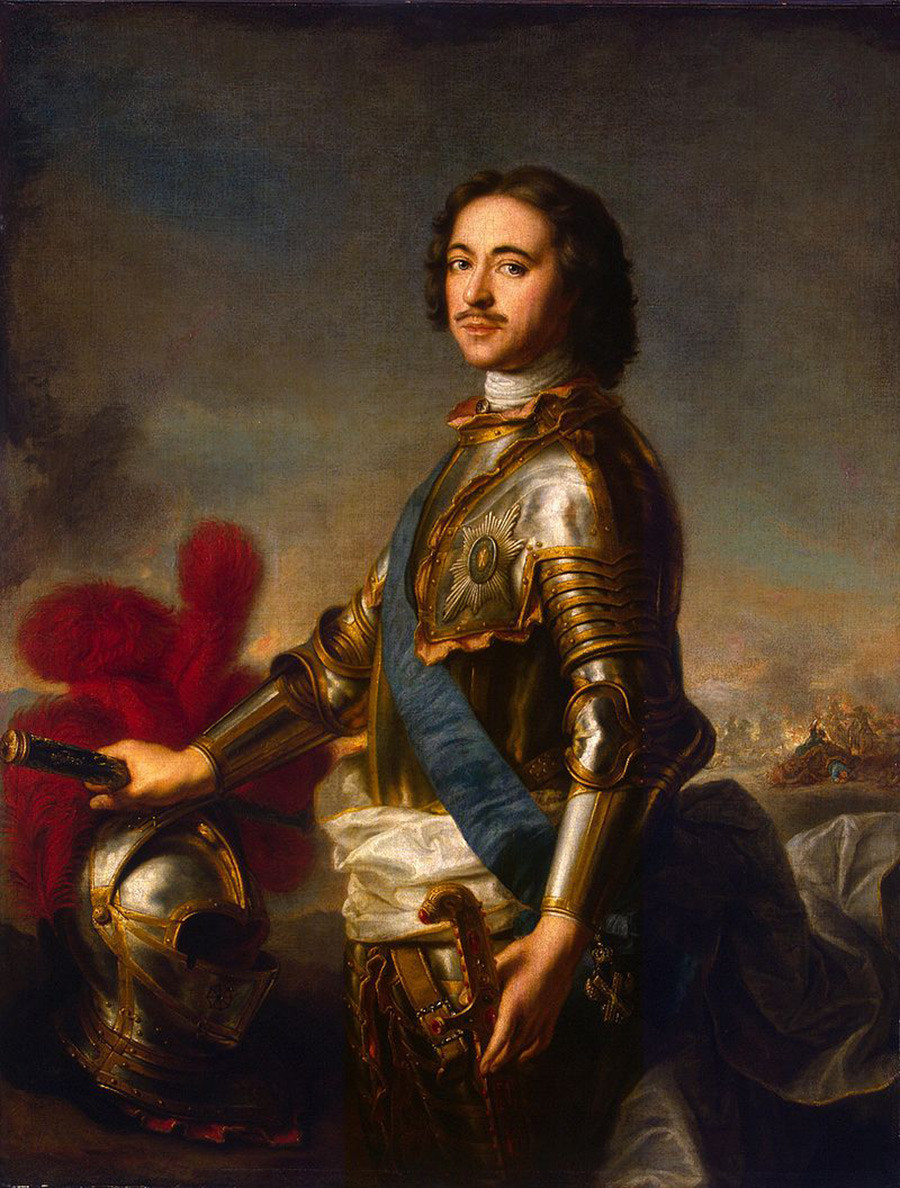 Portrait of Peter I

Another novel about Peter the Great tells of his early years in power. Tolstoy masterfully portrays people close to the tsar, embroiled in intrigues and telling lies for the sake of the throne. On one side is Peter’s treacherous sister, who in fact rules the country, and on the other side is Peter’s entourage who ignore his orders.

Peter seeks to surround himself with ordinary people who he can trust, whether it’s German Lefort or Alexander Menshikov, both of whom previously could not appear at court due to their low origin.

When reading the novel one should remember that it was written by Stalin’s orders, so the author clearly sympathizes with the strong personality of Peter, who does not spare the lives of ordinary people in pursuit of  his main goal - the creation of an empire and the rapid development of the state.