Culture
Alexandra Guzeva
The works of this master of landscape and biblical subjects are said to lead the soul to a state of perfect harmony. Who are we to disagree? 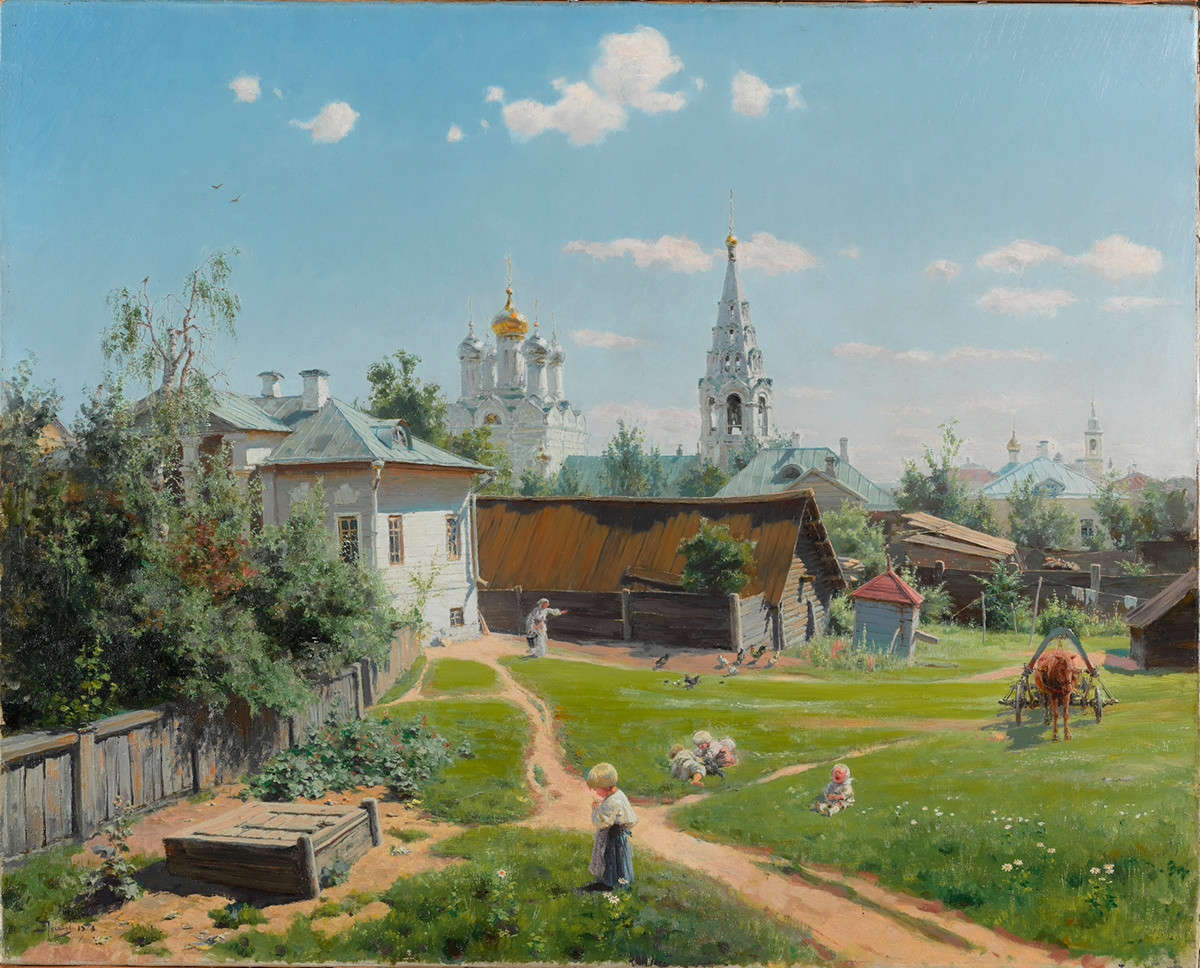 Probably the most famous work by Polenov, Moscow Yard was painted from life in an alley of Arbat Street (today somewhat unrecognizable). A native of regal St. Petersburg, Polenov could not have encountered such cozy rustic scenes in the then capital all that often. The painting appeared a year after the artist moved to Moscow at the age of 33.

The work was wildly applauded at an exhibition of the Wanderers, a group of Russian realist artists, who just so happened to be looking to move away from academism and set-piece painting to seek inspiration in the common folk. 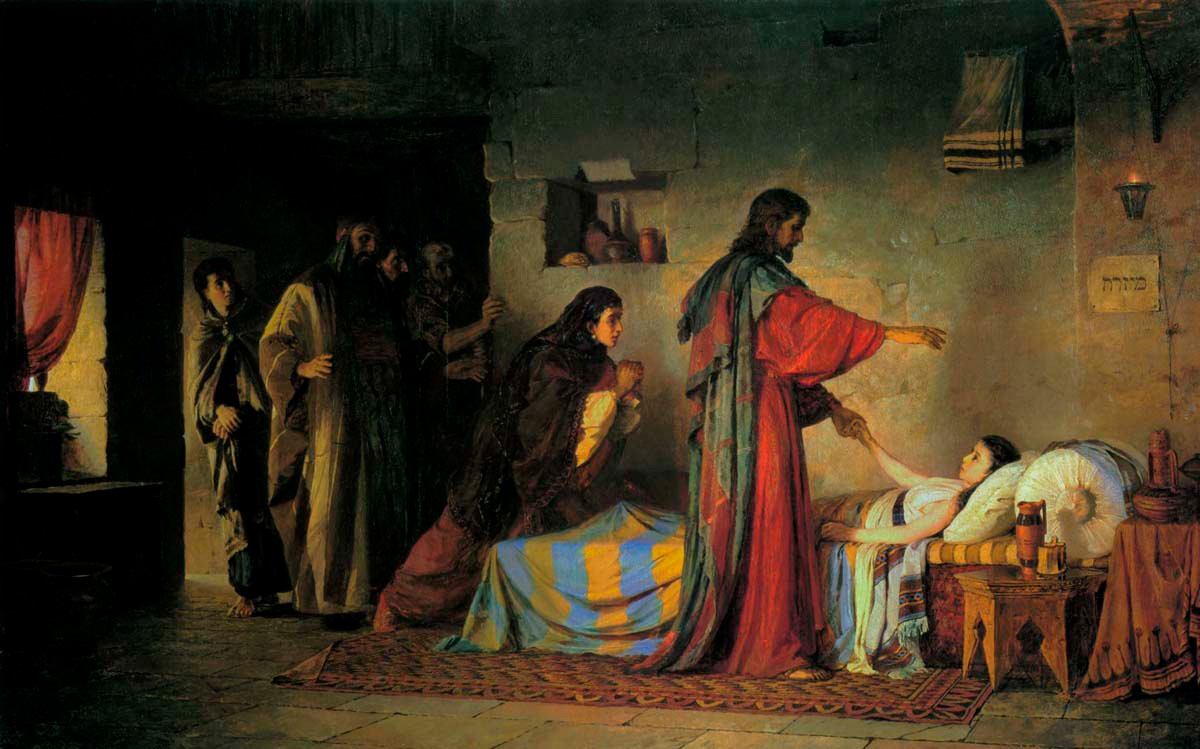 We got a bit ahead of ourselves in Polenov’s biography, so let’s backtrack a bit. Vasily Polenov was born in 1844, the same year as the celebrated Ilya Repin, author of the famous Barge Haulers on the Volga (check out Repin’s 10 must-sees). Incidentally, they were coursemates at the Russian Academy of Arts and chose the same subject for their final-year project — the raising of Jairus’ daughter. Both received top marks and a gold medal (which do you think is better?) 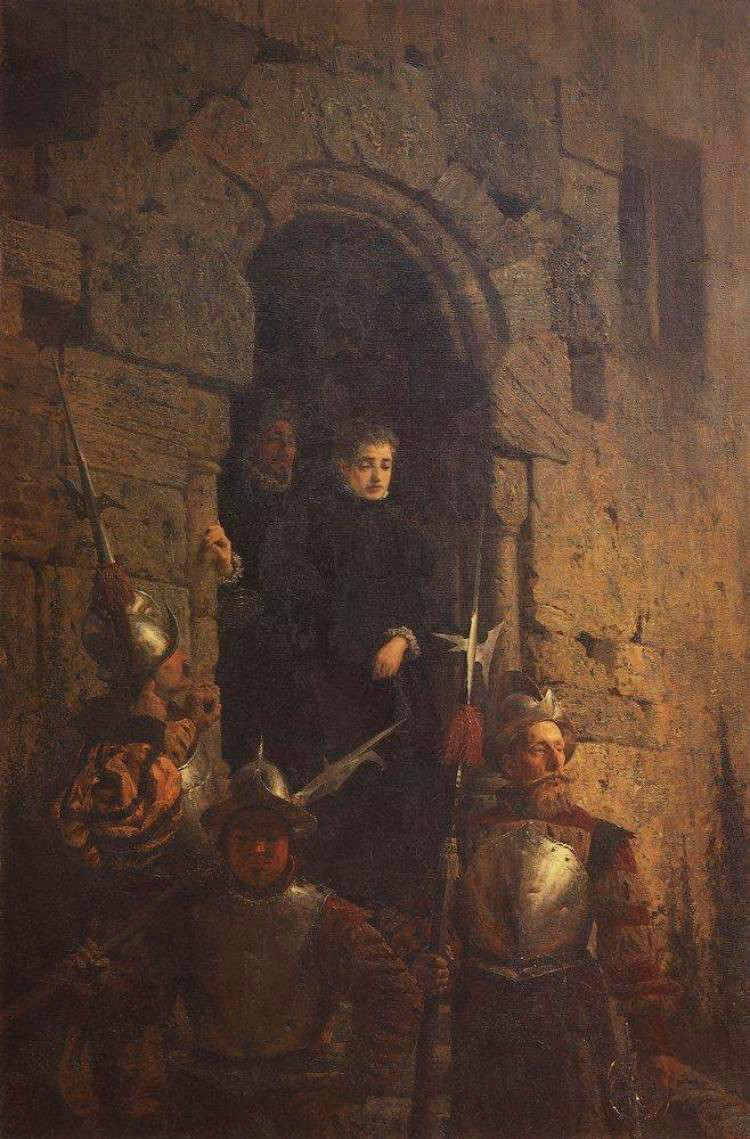 After graduating from the Academy of Arts, Polenov (like Repin) received a special grant for a trip to Europe, and traveled to Austria, Germany, Italy, and France. There he was inspired by the landscapes and buildings, and painted Venice and the resort towns of Normandy. But it was in Paris that he created this historical canvas, for which he was made an academician. 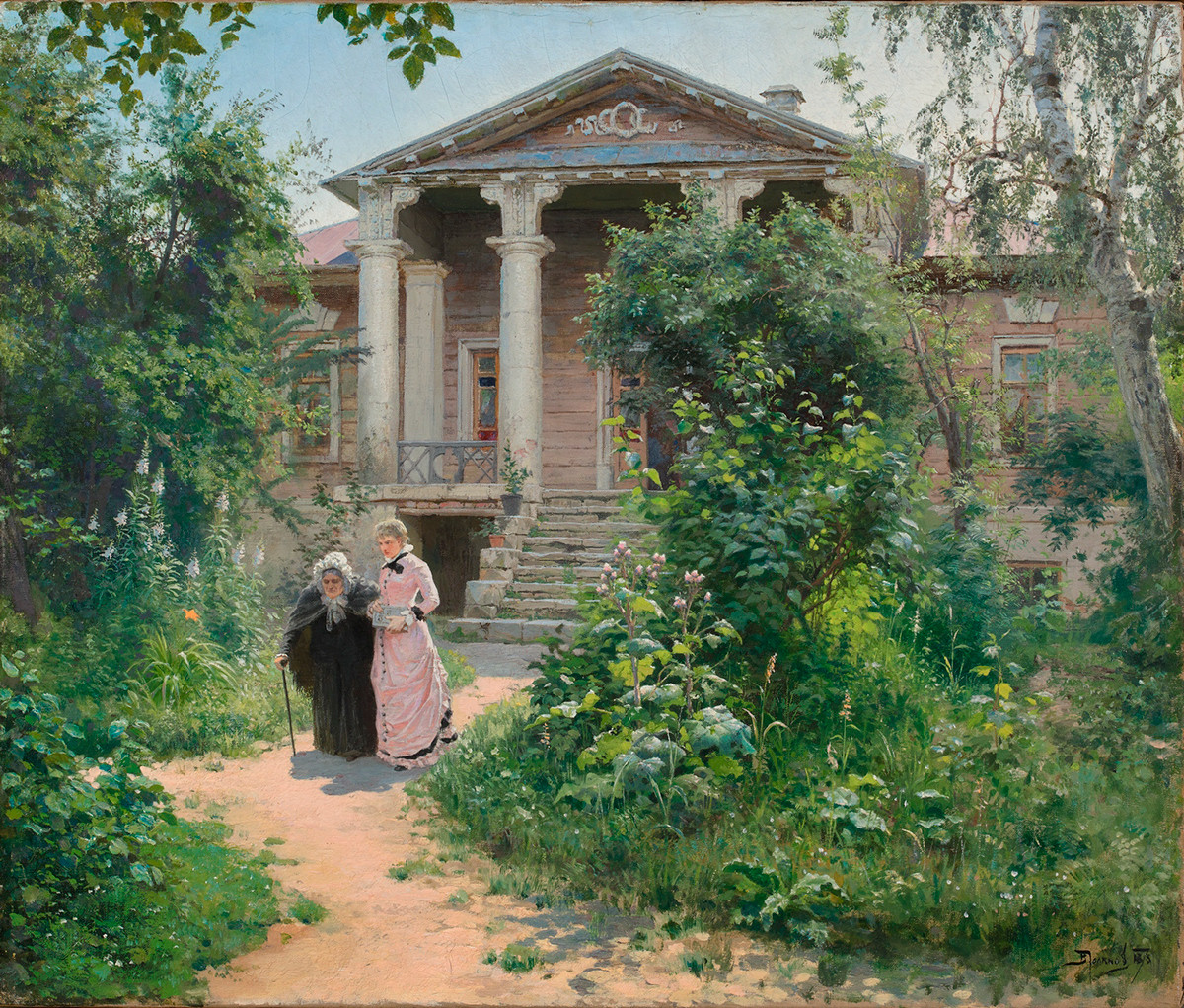 As we mentioned, at age 33 the artist settled in Moscow, where he started painting “mood landscapes” of the city. Incidentally, this work depicts the same place as Moscow Courtyard, but from the other side. Moscow became populated with such houses after the great fire of 1812 during the war with Napoleonic France. 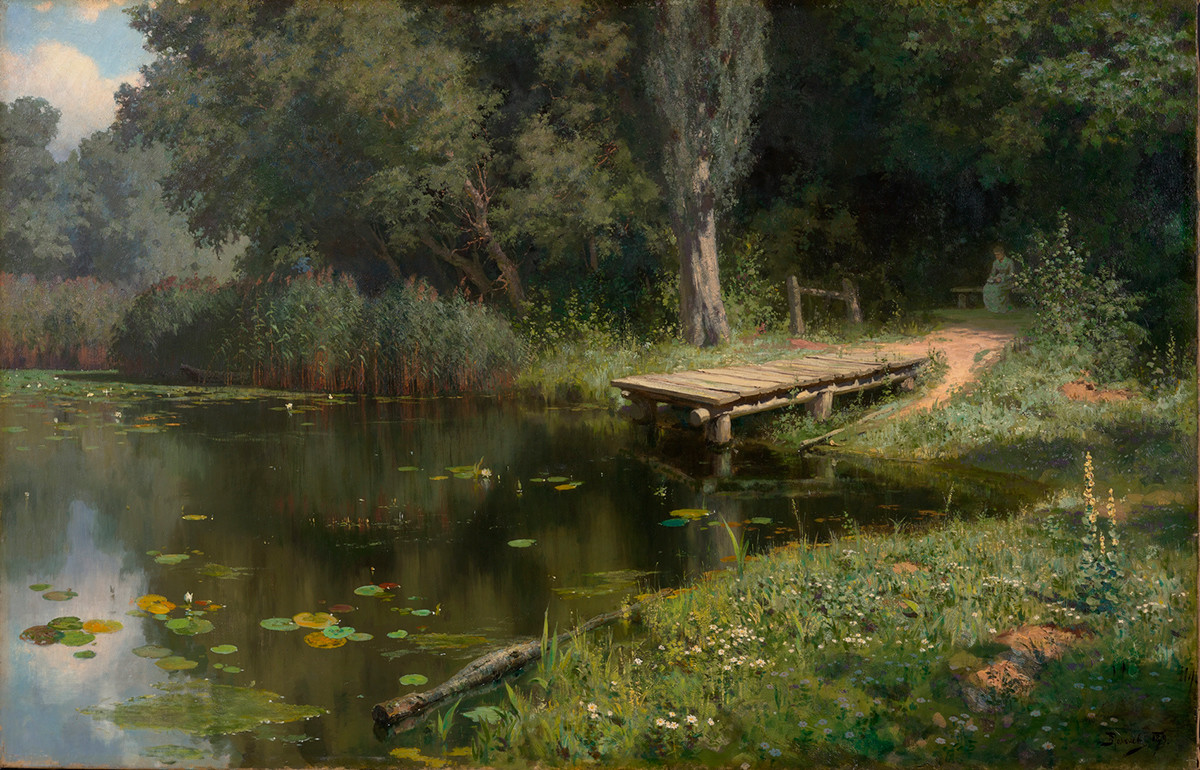 Overgrown Pondis another of the artist’s most famous paintings. It saw the light of day at the Wanderers’ exhibition, together with Grandmother’s Garden. Polenov drew several sketches for it, and ponds and boats would become a recurring theme in his output. The picture clearly reveals the strong influence of the French impressionists on Polenov, but the technique is magnificently transferred to a Russian setting with amazing use of light. 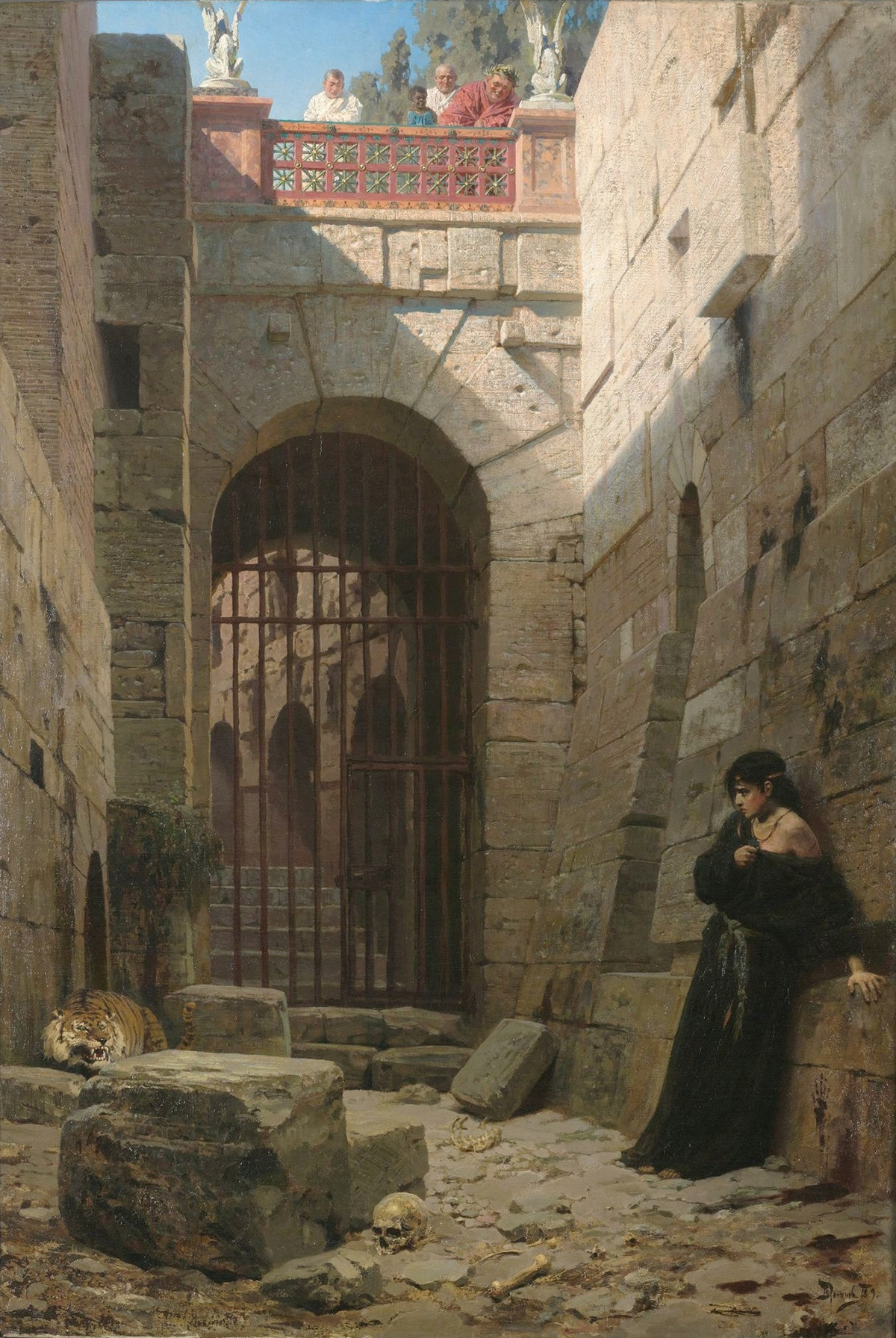 In addition to landscapes, Polenov treated historical subjects. The material for this painting comes from Italy. It depicts the moment before the killing of a terrified young girl — a wild beast has been released from a cage and is clearly preparing to pounce. On the floor is a skull, possibly that of another slave. Beholding the dreadful scene from on high is the contented emperor himself. 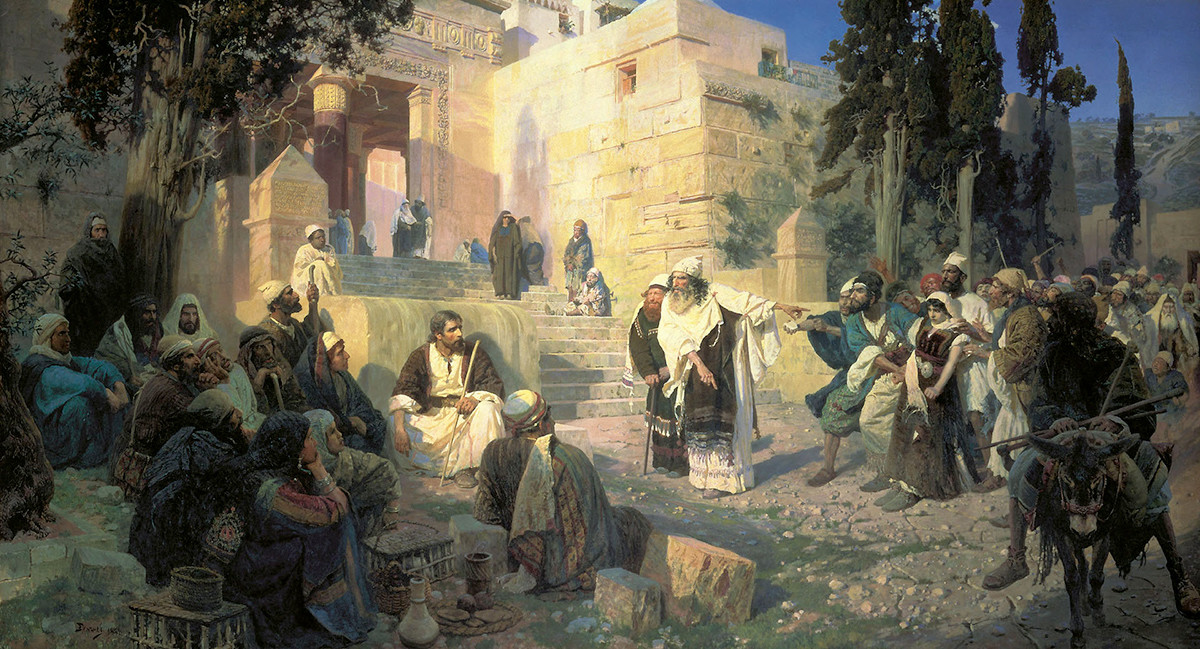 This 3.25×6.11 m (!) canvas is Polenov’s piece de résistance. The biblical subject was conceived in his mind over a period of many years. To accurately depict Christ’s surroundings, as well as the faces of the “mob,” Polenov spent two years in Palestine, Syria, Egypt, and other places in the Middle East, making dozens of sketches of faces, landscapes, costumes, and buildings. 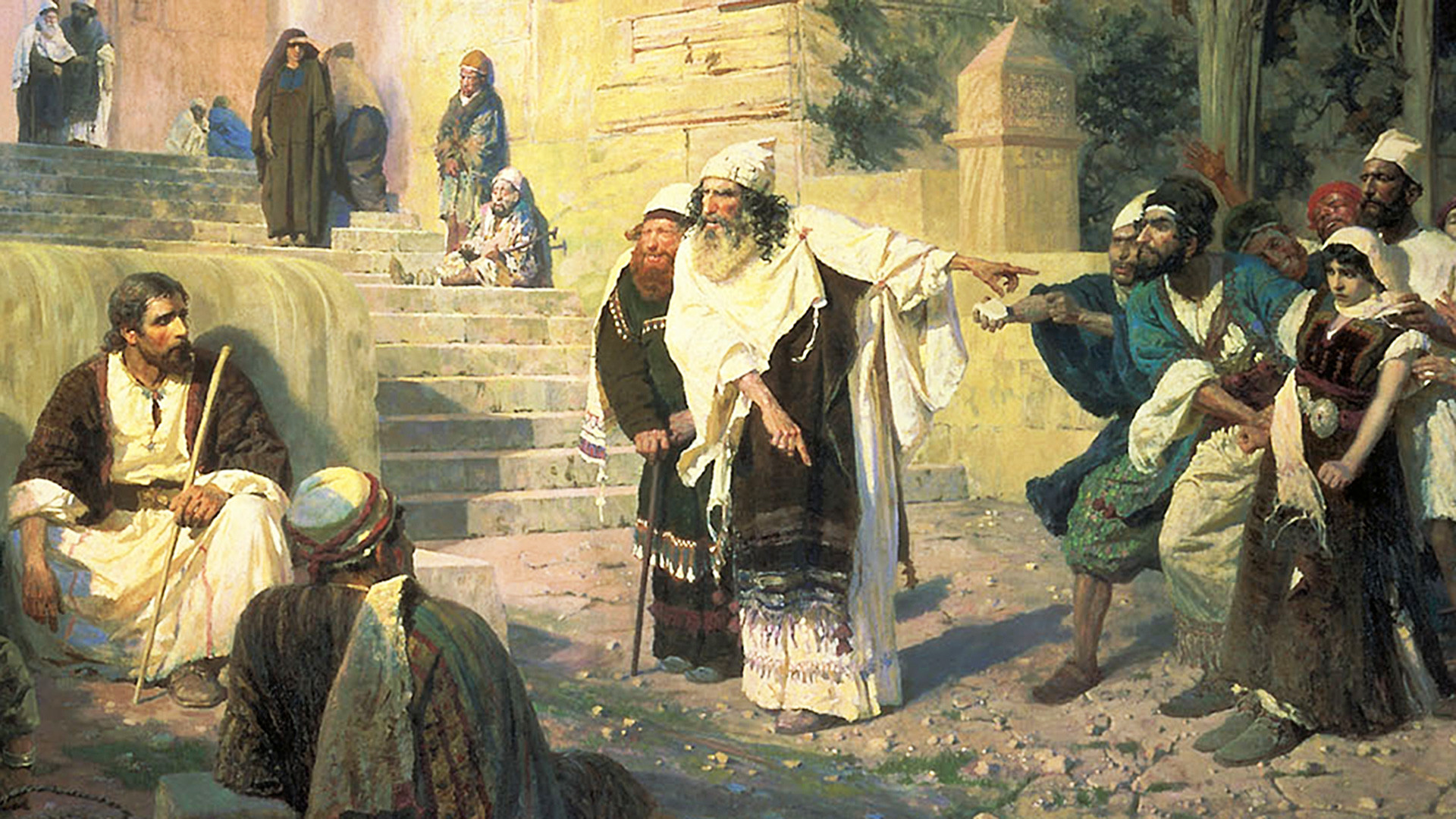 Fragment of the painting

Polenov’s main aim was to show Christ as an ordinary person, at the onset of his journey to becoming the Messiah. 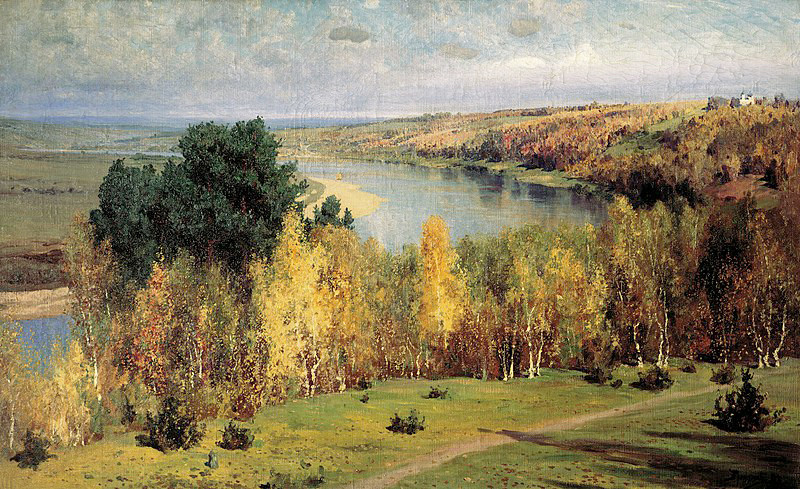 Christ and the Sinner was purchased by Emperor Alexander III, and with the money the artist built himself a house on the picturesque bank of the Oka River. Today it houses the Polenovo museum-estate with a full-scale copy of the painting (the original is at the Russian Museum in St. Petersburg).

There at his Polenovo estate, the artist painted many landscapes, among them Golden Autumn. 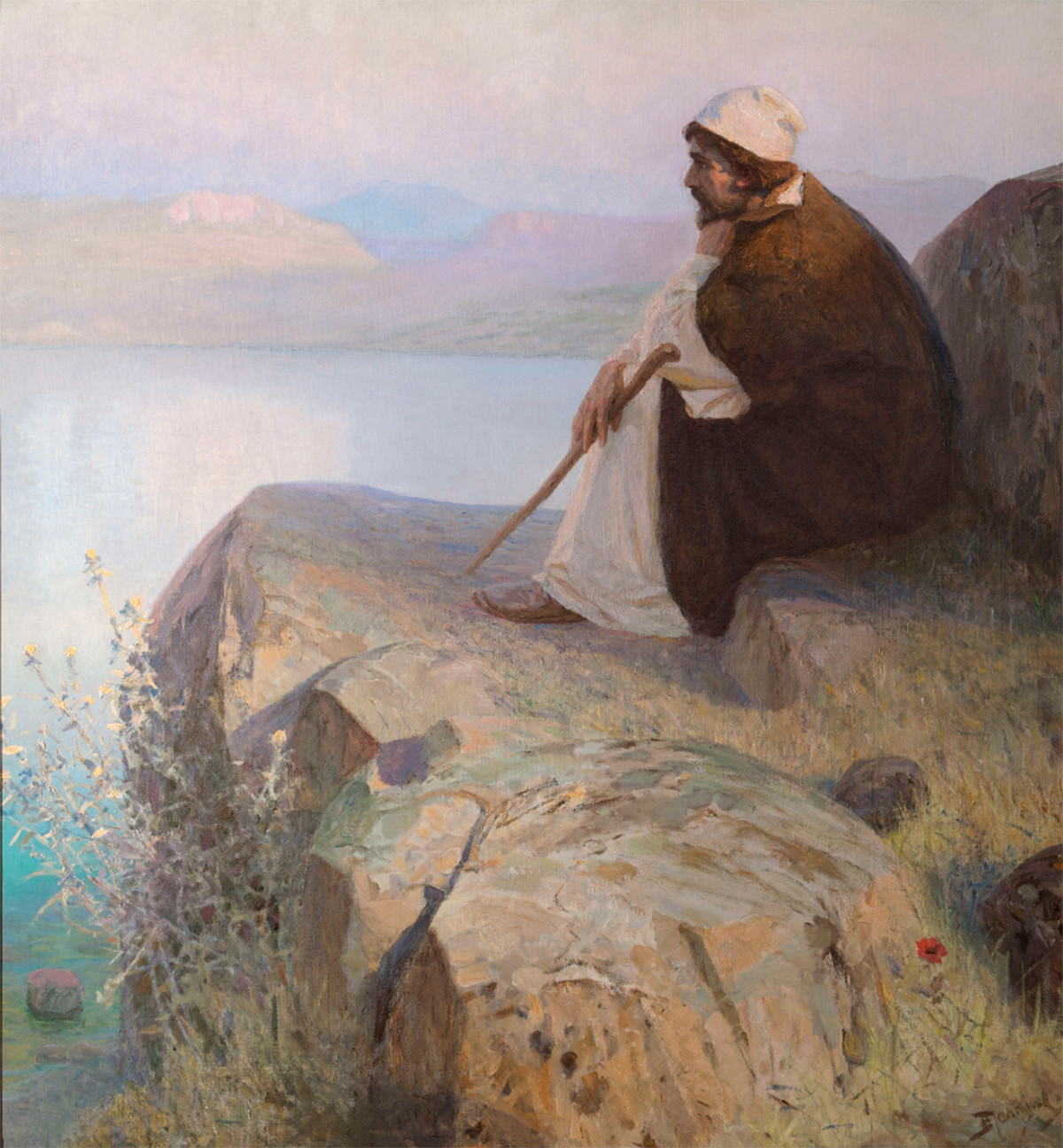 In 1899 Polenov again traveled to the Middle East. During and after this trip, he painted the series of paintings From the Life of Christ, which had great significance for the artist. Polenov wrote about the forthcoming work: “The task before me is overwhelming, but I am unable to refuse it — I am too captivated by the grandeur of this man and the beauty of the narrative about him.”

That said, Polenov’s Christ is always an ordinary human being, with dreams and weaknesses like any other. 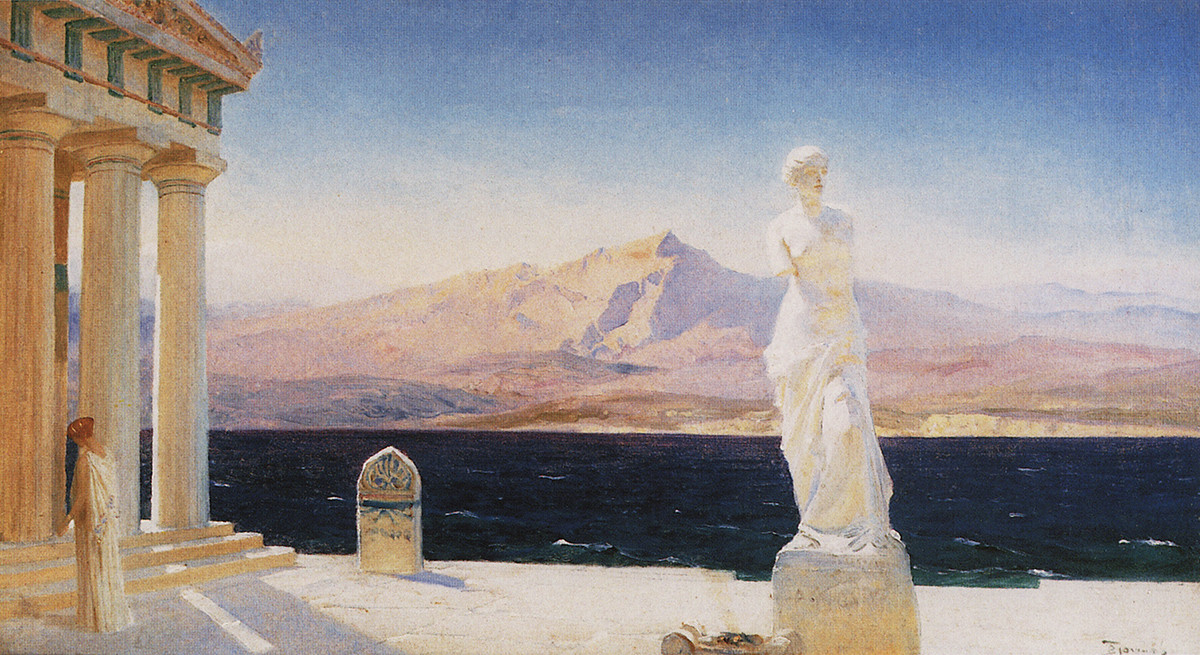 Polenov had a passion for the theater, and staged performances at his estate. He made his own sets and invited children from all over the district to take part, while his wife sewed costumes by hand. Even the Polevnos’ living room was arranged so that the “actors” could emerge from a secret door, as if from behind the curtain.

In 1906 the opera Ghosts of Hellas premiered in Moscow, for which Polenov composed the music and designed the costumes and scenery all by himself (see the sketch in the picture).

After the revolution of 1917, the artist lived mainly at his estate on the Oka. Despite the abundance of religious subjects in his work, the Bolsheviks treated him with great reverence. He was even awarded the title of People’s Artist in 1926, dying quietly the following year at Polenovo.

The largest ever exhibition of the artist opens on Oct. 17 at the Tretyakov Gallery, and runs till Feb. 16, 2020. Buy tickets in advance online to avoid disappointment: www.tretyakovgallery.ru