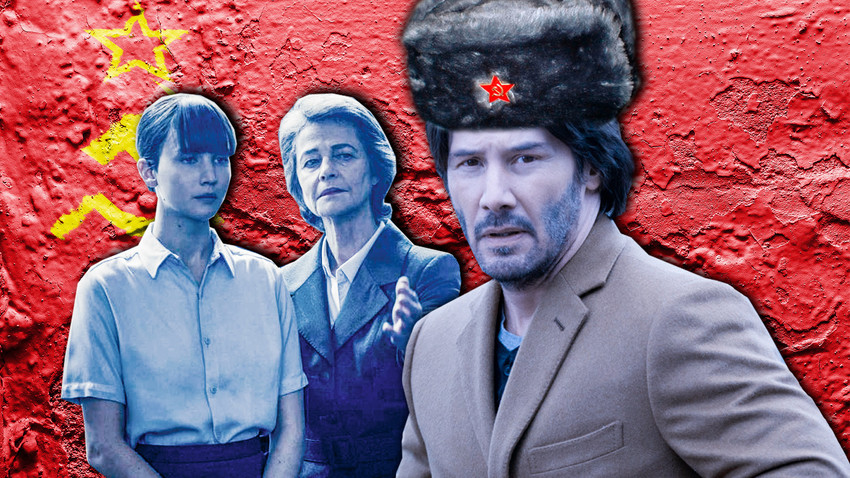 Hellbus; Legion Media; Francis Lawrence/20th Century Fox; Matthew Ross/Buffalo Gal Pictures
Only 30 years have passed since the collapse of the Soviet Union, but evidently that has not been enough time for Hollywood to think up some new stereotypes about Russia.

Many popular Hollywood movies are filled with clichés that migrate from film to film. No one quite knows where they came from, but more often than not they’re there, and viewers have come to expect them. A bomb can be defused one second before it is supposed to go off, and in a pinch you can always sneak into a building through the ventilation ducts. When other countries are shown, directors rarely agonize over nuance. In Paris, you can see the Eiffel Tower from whatever hotel the characters are staying in, and everyone in the vicinity is consuming baguettes and croissants on an industrial scale. Hollywood employs similarly clumsy stereotypes when depicting Russia. We see women wearing fur, men swilling vodka and gobbledygook in Cyrillic. Here are some of the most common themes.

1. Russia is all doom and gloom, and the West is bright and beautiful

Deliberate or not, this technique is used almost across the board in movies involving Russia. The country is presented as a gloomy and dreary place where the sun never shines and people look like a homogeneous mass. Everything tends to be depicted in an unpleasant grayish-blue hue.

In Red Sparrow (2018), for example, the protagonists fall completely in line with these stereotypes. They wear army greatcoats and gray suits, the interiors of their apartments are depressing and there are hardly any people in the city streets – perhaps they’re hiding in their homes because of the curfew or something? And this is in Moscow – can you imagine?!

Meanwhile, Russia’s gloom often contrasts sharply with the bright West. In Red Sparrow, everything changes as soon as the heroine, played by Jennifer Lawrence, finds herself in Europe. She immediately shows up in bright makeup and sporting a fashionable hairstyle and clothes. What a miracle! 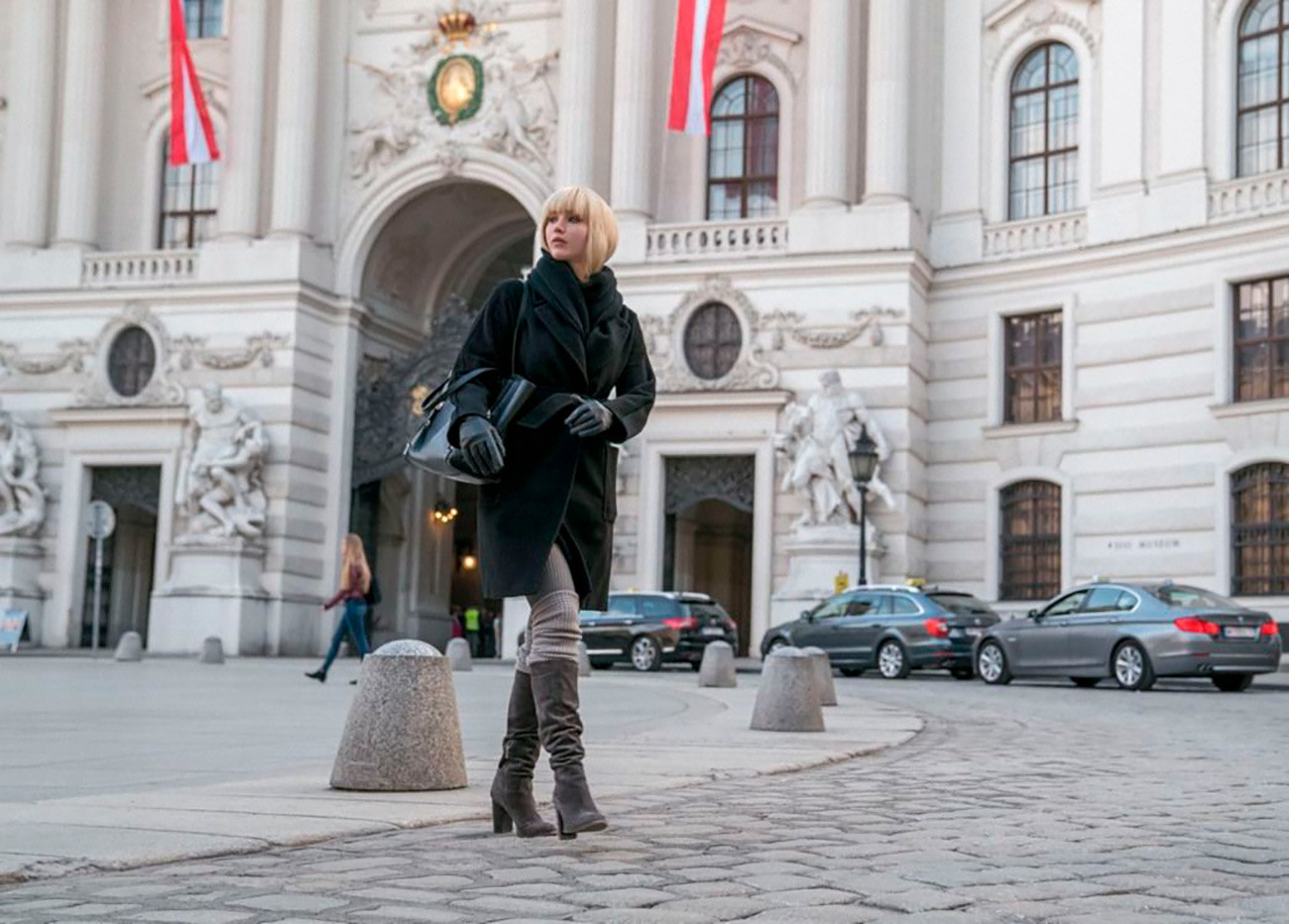 Or take Siberia (2018), a film with Keanu Reeves about diamond smuggling from Yakutia. Viewers see the protagonist's American apartment with its sparkling white kitchen, modern appliances and colorful cookware.

Then he finds himself in a house in Mirny, where the kitchen has some dingy pink-colored cupboards, and everything looks so drab and depressing that you can barely even distinguish color.

It is not clear why, but contemporary Russia is often depicted as not just poor but also technically backward. Remember Tom Cruise's visit to Moscow in Mission Impossible: Ghost Protocol from 2011? His character goes into an alley in the city center to receive his secret mission instructions on a Soviet payphone. Good luck finding a payphone Moscow these days – although who knows, in a city as cellphone-obsessed as Moscow maybe there’s an app for that. The heroine of Red Sparrow also uses a public payphone to make a call in 2018.

3. The Soviet Union is alive and well

The interiors of the school for sparrows in Red Sparrow were clearly inspired by Soviet bureaucratic institutions.

There are faded red curtains on the windows, and the walls are decorated with crude Soviet mosaics so one gets the impression that the country’s hay harvesters are about to complete their five-year plan. In so many films about Russia references to the Soviet Union ooze like mayonnaise from an Olivier salad.

Hellboy (2004)shows the military base Tobockba (not the most pleasing name to the Russian ear) in Moscow that, if one believes the direction signs and is capable of reading them, has one office and two warehouses. A hammer, sickle and the inscription "USSR" can be seen on the signs. Apparently, this is intended to signify evil to viewers and inspire horror? 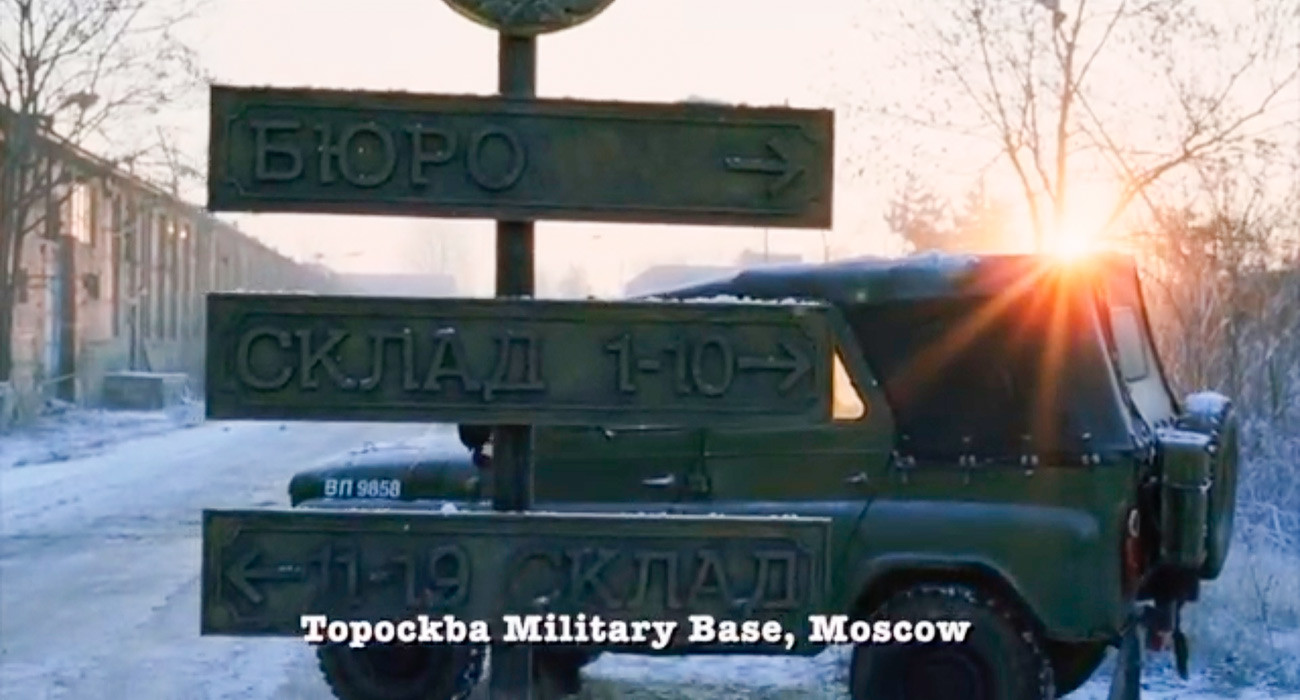 Something resembling a Soviet banner also hangs inside the warehouse, although here the hammer and sickle are framed by a star. 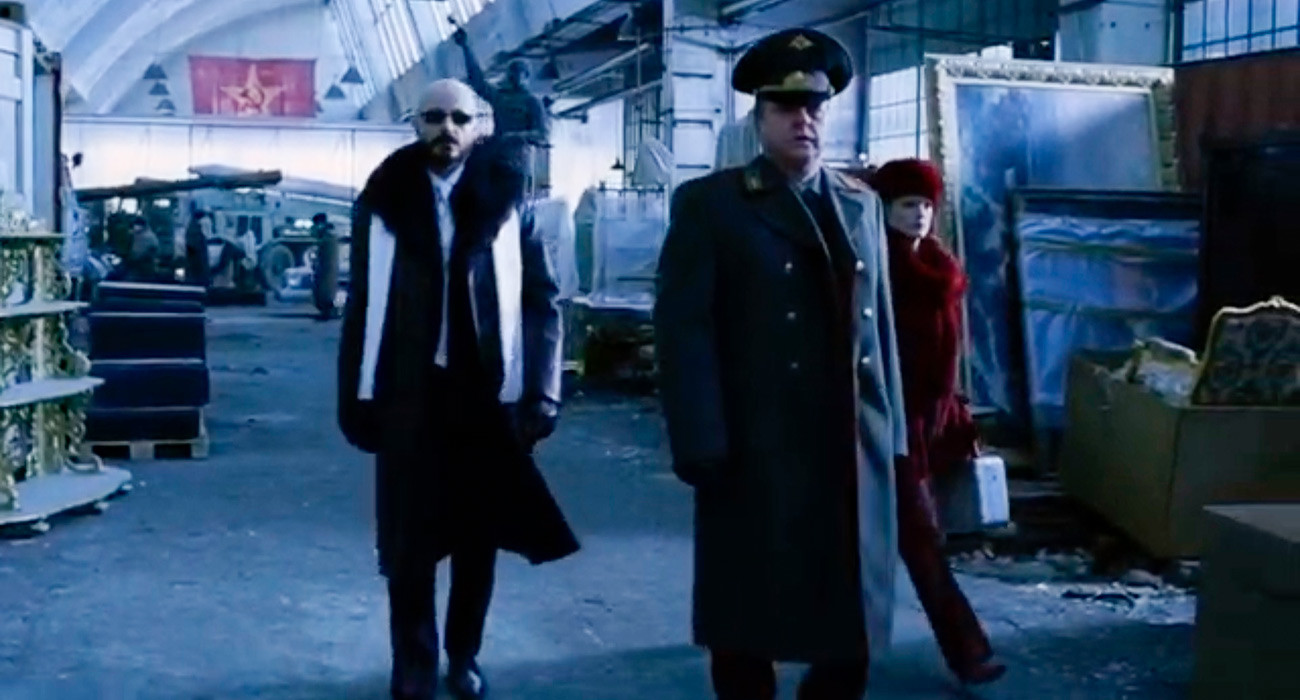 Can you remember a single Hollywood movie that shows Russia having warm weather, even in the summer? Red Heat (1988) doesn't count since it is about something else. But how about a movie showing beaches, the sea and the sun? Neither can we. But snowy streets are usually shown in an excruciatingly identical manner. Take, for example, the Moscow dormitory suburb in Red Sparrow.

We see a deserted field with several high rises and a homeless dog wandering about.

And what a marvelous view of the absolutely deserted snowy road leading to the intelligence school!

This is almost identical to a scene in Hellboy showing a search for Rasputin's grave in Volokolamsk in the Moscow Region. 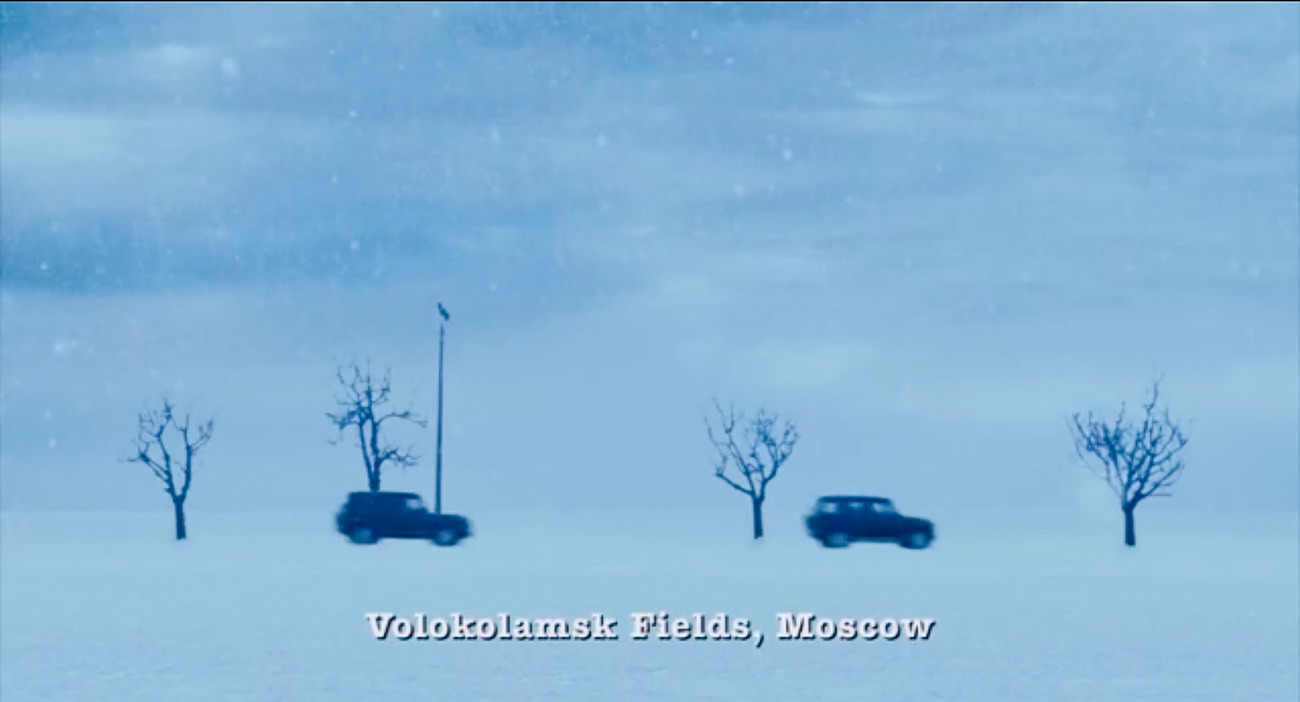 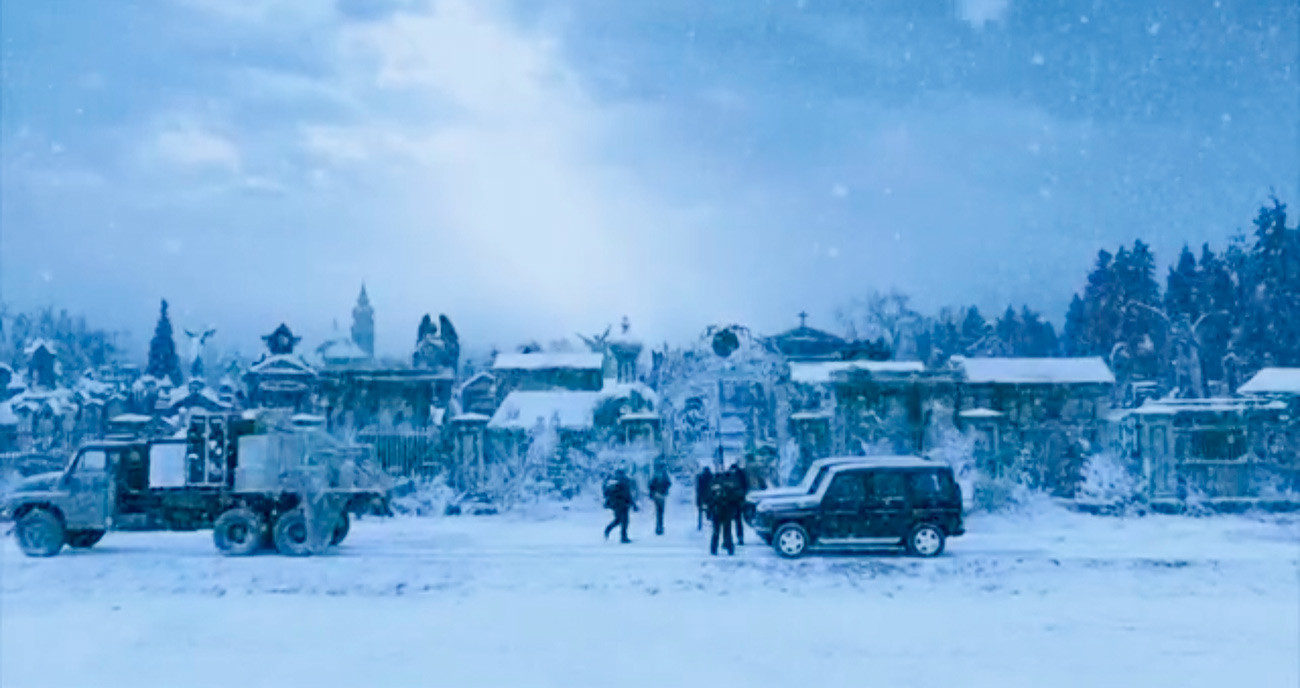 But then in Siberia, which is set in Yakutia (an objectively freezing place), there isn't enough snow. The movie was filmed in Canada during a mild part of the year, and so green foliage insidiously appears in the frame from time to time.

In the most dramatic scenes, however, the set designers made sure snow was in abundance.

Winter doesn’t pursue Russians just at home. They carry it with them to any spot on the planet. In Red (2010), a movie about retired secret service agents, Bruce Willis's character comes to the Russian embassy and, although up to this moment it has been warm outside, a snow storm begins mysteriously right in front of the embassy entrance. And the entrance to the embassy is, of course, guarded by bears (luckily, not real ones).

And what is your favorite film about Russia?