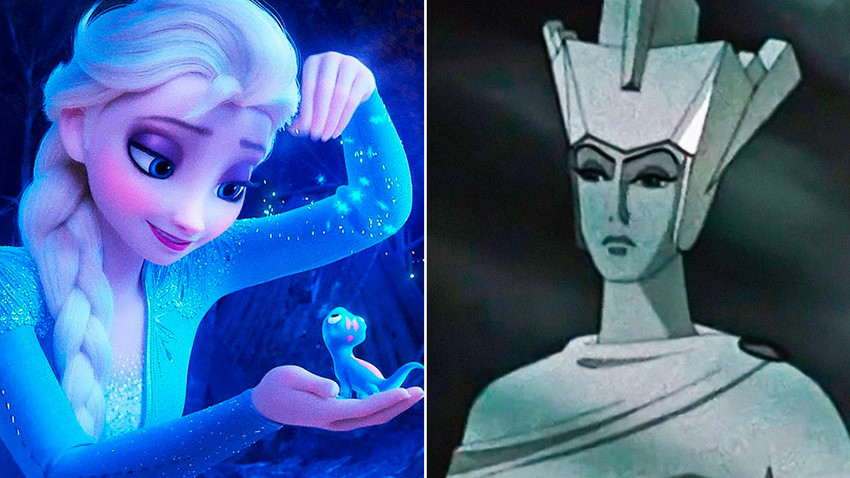 Chris Buck, Jennifer Lee/Walt Disney, 2019; Lev Atamanov/Soyuzmultfim, 1957
The ‘Frozen’ franchise may be the most successful adaptation of Hans Christian Anderson’s ‘The Snow Queen’ to date, but it was far from the first. That honor belongs to a Soviet-era classic, released in 1957. And its lessons are wildly different to those we are taught in ‘Frozen’.

November 28th will see the Russian release of Disney’s Frozen II, a sequel to one of the most successful animated movies of all time. The first film, released back in 2013, became a flat-out cultural phenomenon. But those who grew up in Russia have long had an ice queen of their own: the unnerving antagonist of 1957’s The Snow Queen - a classic that went on to inspire visionaries like Hayao Miyazaki.

Both films were inspired by Hans Christian Anderson’s fairy tale of the same name, but only the Soviet version remained faithful to the original plot. It opens, after a short introduction from a Sandman-like figure, with its two child protagonists, Gerda and Kai, playing on a small terrace bridging their bedroom windows. They plant roses in summer and listen to Gerda’s grandmother tell stories in winter.

One of these stories is about a Snow Queen who lives in the north and watches the world through a mirror made of ice. On occasion, she floats through the city to observe people unawares. Gerda gets scared, thinking she sees the Snow Queen through their window, and Kai makes her laugh with all the ways he’d take care of her should she come into the house. Melting her on a stovepot or smashing her to pieces are among the possibilities.

The real Snow Queen, as it were, is watching them through her mirror the whole time – she smashes its surface into frozen shards and commands them to find Kai. When they do, blown in on a violent wind, they pierce his heart and eyes. In an instant, he becomes rude and insensitive, insulting both his friend and her grandmother. Gerda, understandably, becomes heartbroken.

The curse doesn’t end there. After leaving Gerda to go sledding in town with some local boys, Kai sees a sleigh driven by a beautiful, pale woman. It’s the Snow Queen herself, and as if in a trance he hitches his sledge to the back of hers. She drives away in a blizzard and takes him to her palace, prompting Gerda to embark on a series of adventures to get him back. 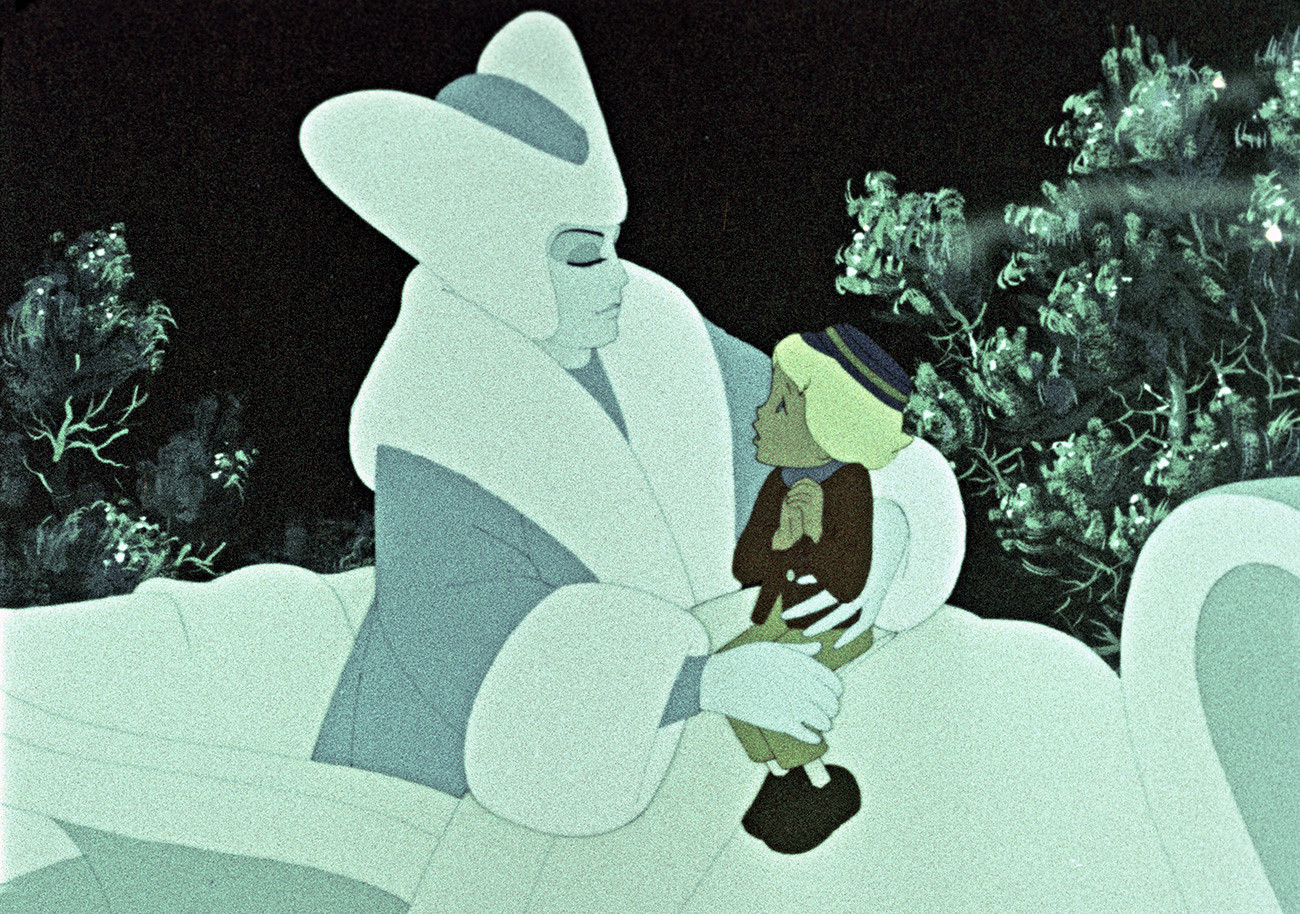 The original idea at Disney was to feature a princess’s quest to find the Snow Queen’s castle, much like in the Soviet version. But the writers played with the plot, turning the princess and the queen into sisters and developing the story of Frozen as we know it. The rest is history: it went on to become a massive hit as well as a bellwether for changing, often liberalizing values.

This is nothing new for fairy tales – they were originally told not only to delight or astonish, but also to pass on moral frameworks. Decidedly modern, Frozen speaks to finding one’s freedom, strengthening sisterhood, defying tradition and, of course, letting go. It’s a straightforward narrative about moving away from trauma and isolation into a kind of faith that things are going to be okay so long as you keep your loved ones close (and your heart open to love).

The Snow Queen is very much the opposite. It’s full of bizarre, unsettling elements that coexist alongside Gerda’s innocence. Its ‘happy’ ending postpones rather than resolves the film’s central tensions. In comparison, all of Frozen’s plots are tidily (if innovatively) concluded by film’s end.

Take the dramatic transformations at the core of both movies. In Frozen, would-be snow queen Elsa was made to hide her powers all her life, but comes to embrace them in the show-stopping “Let it Go” sequence. Kai, on the other hand, becomes sullen, irritable and, curiously, interested in geometry.

Both sets of changes look remarkably like puberty. Kai becomes standoffish, explores his physical powers, is confused and doesn’t know how exactly to understand the transition he’s going through. But rather than help him through his transition, the film’s plot revolves around ‘rescuing’ him from his new self and restoring him to a state of innocence. The fact that an otherwise normal set of changes in any boy’s life is treated like a magic curse says a lot about contemporary anxieties over male energy. 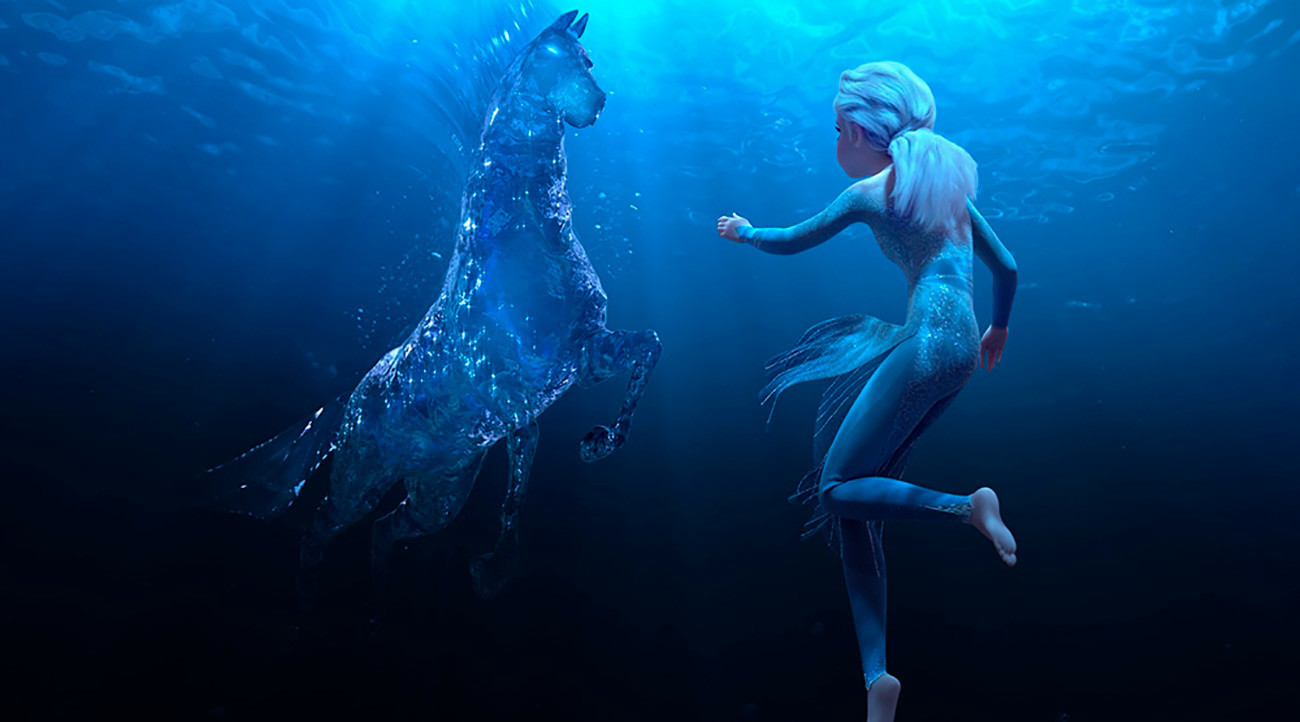 Compare this with “Let it Go,” with its clear directive to accept oneself and one’s powers. Again, magic seems to be a metaphor for sexual development because, as soon as Elsa accepts herself, she dons a new look that suggests a woman who is aware of and empowered by her body. At every turn, Elsa and her sister Anna’s journeys encourage them to open up to new experiences and not be afraid of what they find.

Gerda’s journey couldn’t be more different – it evokes a world that’s dangerous in ways she’s not able to control or, at times, resist. Kai’s sudden change (and disappearance) destabilizes her life, and her quest is one of restoring it to the way it was. And her greatest tool is her innocence, as confirmed by the oracle-like Finn woman she meets on her way.

This innocence is contrasted at all turns by a set of supporting characters that range from the morbid to the outright disturbing. She encounters a lonely sorceress so desperate for attention that she tries to magic Gerda into forgetting about Kai. Later, Gerda is led into a castle by two crows who can only be described as gratuitously sinister. She goes on to make friends with a little robber girl who has a disturbingly violent relationship with her mother.

And that’s all without describing the Snow Queen herself. 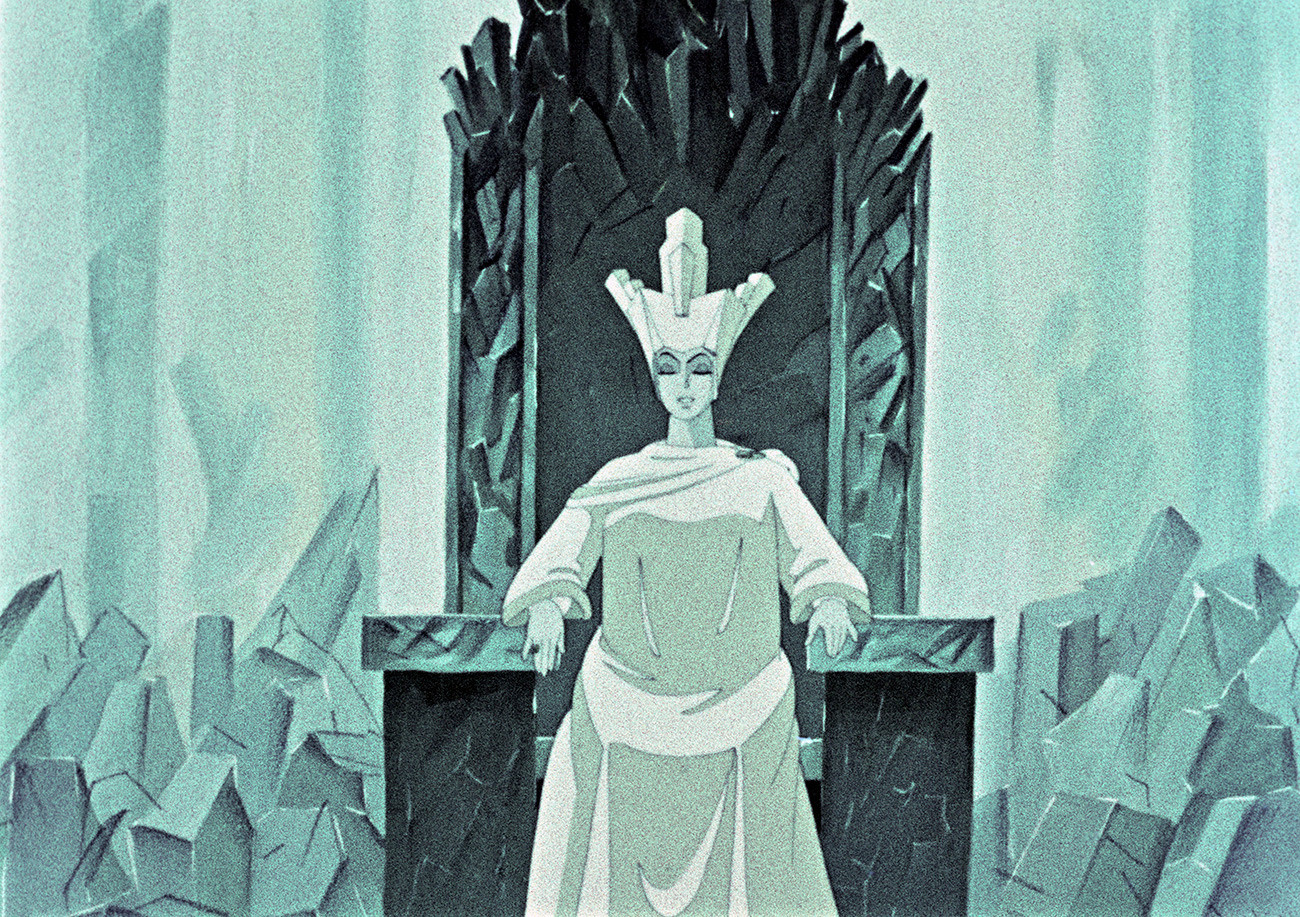 America’s ‘Frozen’ could never have existed in Russia

As she whisks Kai into the clouds, the Snow Queen tells him “we’ll fly away to a wondrous kingdom. Once you’re there, you’ll forget everything. Your heart will turn to ice. You will know neither joy nor grief, only calm and cold. That’s happiness.”

This isn’t the plotting of a cartoonish villain – it’s an understated manifesto of a powerful woman who has long realized that protection comes before love and who must constantly negotiate her own survival. She describes, in a word, adulthood.

Or take the palace scene. Matching its mistress, everything is cold, spacious, linear, incredibly well lit. Kai spends his time looking at pieces of ice, admiring their precision, saying their angles are more interesting than flowers. “You’re right, Kai,” the Queen says, attempting to initiate him into a mindset that allows people to maintain power and distance in an unfriendly world.

This speaks to the essential difference between Frozen and The Snow Queen, one that boils down to a single question: is the world going to help or hurt you? 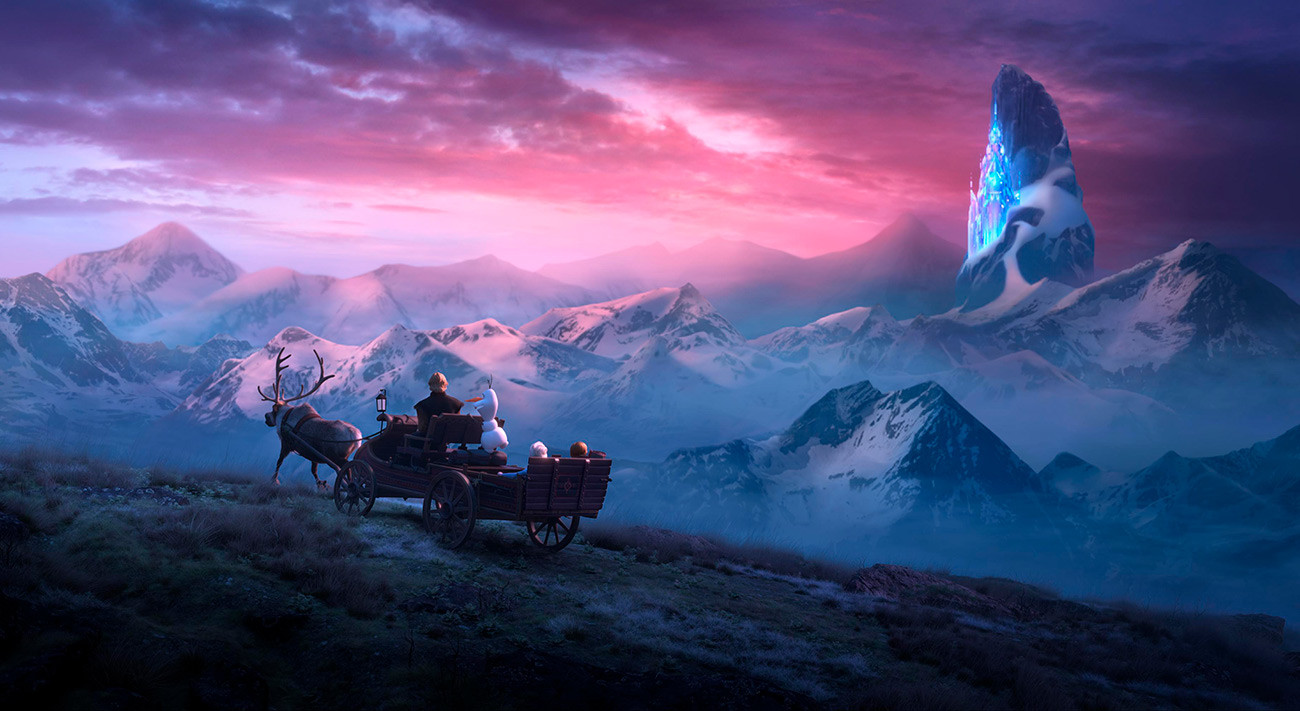 For the Snow Queen herself, the latter proves true. Letting go in a world like hers only leaves you open to attack. There are two kinds of protection suggested: proactive isolation or the cultivation of an innocence that might only exist in fairy tales. And since this is a fairy tale, when Gerda and the Snow Queen come face to face it’s innocence that wins out.

But we never learn exactly why. When Gerda confronts the Snow Queen and asks for her friend back, the woman merely grins, with a weariness that knows too much, before vanishing. Kai is free to return to his childhood, and as they go home they’re greeted by the characters Gerda met along the way. They all shout the same greeting: be happy!

While Gerda’s innocence may have been enough to restore Kai’s, it doesn’t change the world around them. It doesn’t change the circumstances that led the Snow Queen to build her ice castle of protection. The world remains the same, and its pressures may one day become too much for Gerda herself.

And this might be why the Soviet cartoon continues to speak in ways that Frozen can’t. It was made in a time when war, blockades and famines were still in living memory. The country that produced it was locked in a struggle with rival powers for existential survival. It reflects the anxieties of everyday people locked in a conflict that didn’t appear to be ending anytime soon. 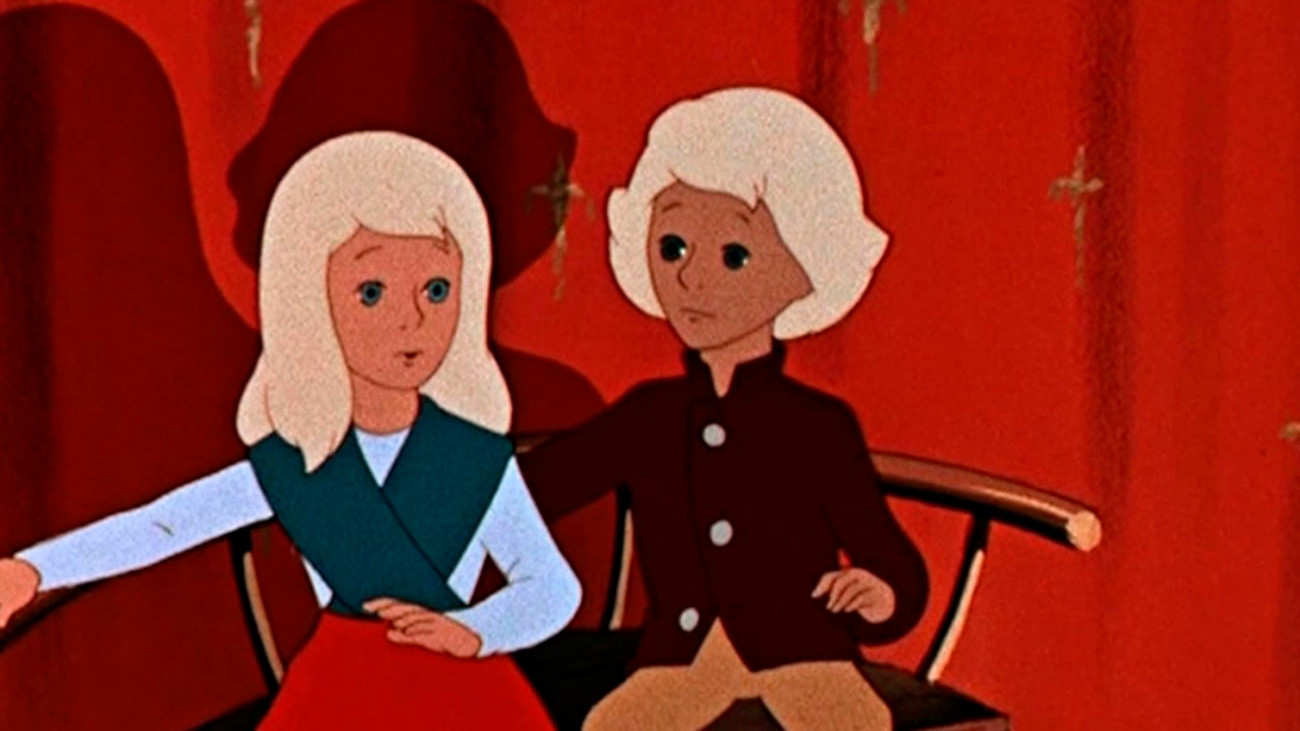 Frozen was made in a culture unthreatened by such concerns. It speaks to a world where freedom comes without a high price, and where girls have less to lose by expressing who they are. Which is amazing – it shows how far certain cultures have come. This will always be an achievement.

But there are plenty of cultures who aren’t there just yet. And for them, there are other snow queens who speak to their circumstances in ways that Elsa cannot. The Soviet Snow Queen admits that you may not always have someone to lean on. That love might not necessarily be accessible or practical. But even so, she smiles, there will always be a way to survive.

READ MORE: Who is the Snow Maiden, Santa Claus’ granddaughter