10 paintings by Aleksandr Deyneka that everyone should know

Culture
Russia Beyond
The legendary Soviet artist Aleksandr Deyneka (1899-1969) was a favorite with the authorities. He also won a gold medal at the World Fair in Paris, took part in the Venice Biennale and remains popular to this day. 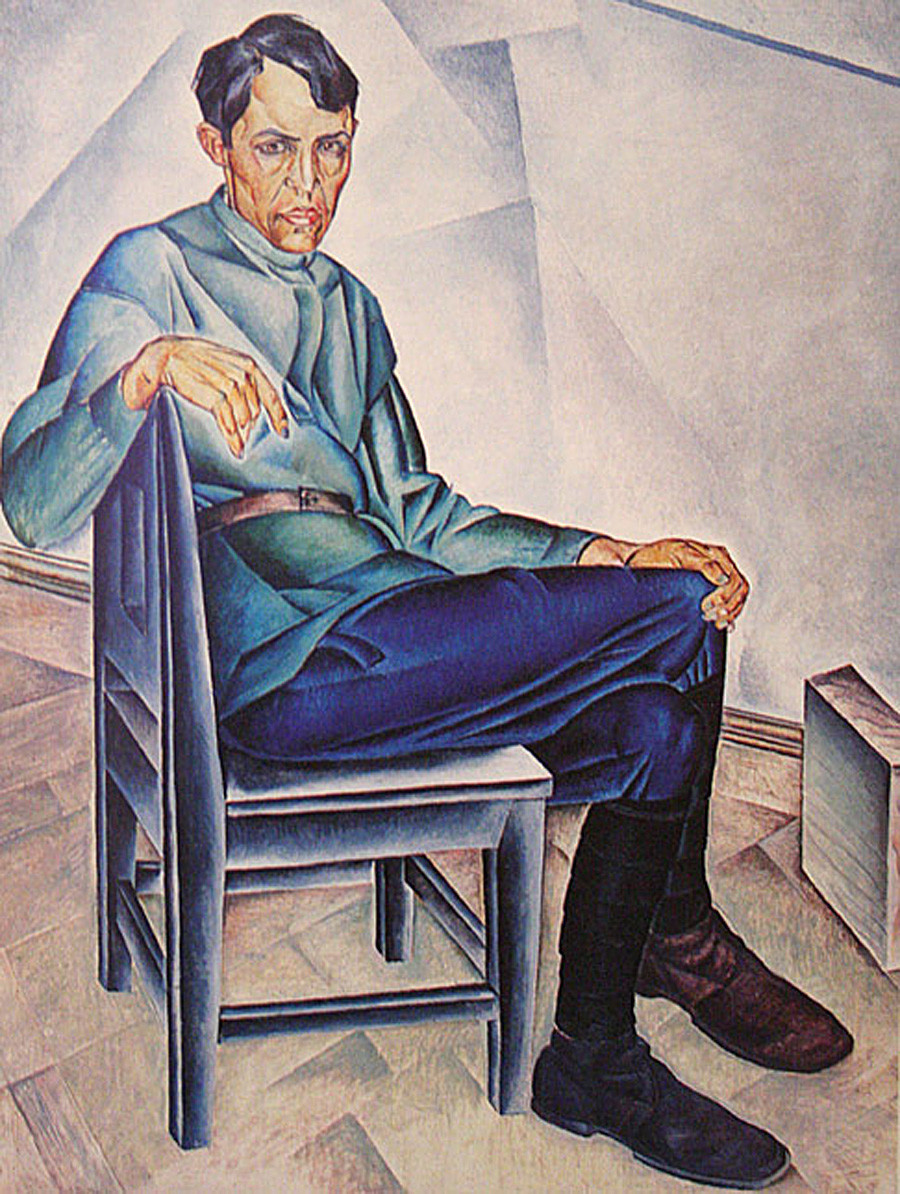 Deyneka painted this portrait of artist Konstantin Vyalov when he was 24, and it could easily be mistaken for a work by one of the great Russian avant-garde artists. It is one of the few early works that betrays a daring experimental spirit by the future titan of socialist realism and Land of the Soviets champion. At the time, Deyneka was a provincial artist from Kursk who had only just arrived in the capital to study after completing his military service. This painting draws on the influence of the European modernists and Italian futurists with whom avant-garde artists were so taken, but it also contains elements of the new Russian “proletarian” realism. However, all these aspects will soon disappear from Deyneka's works. 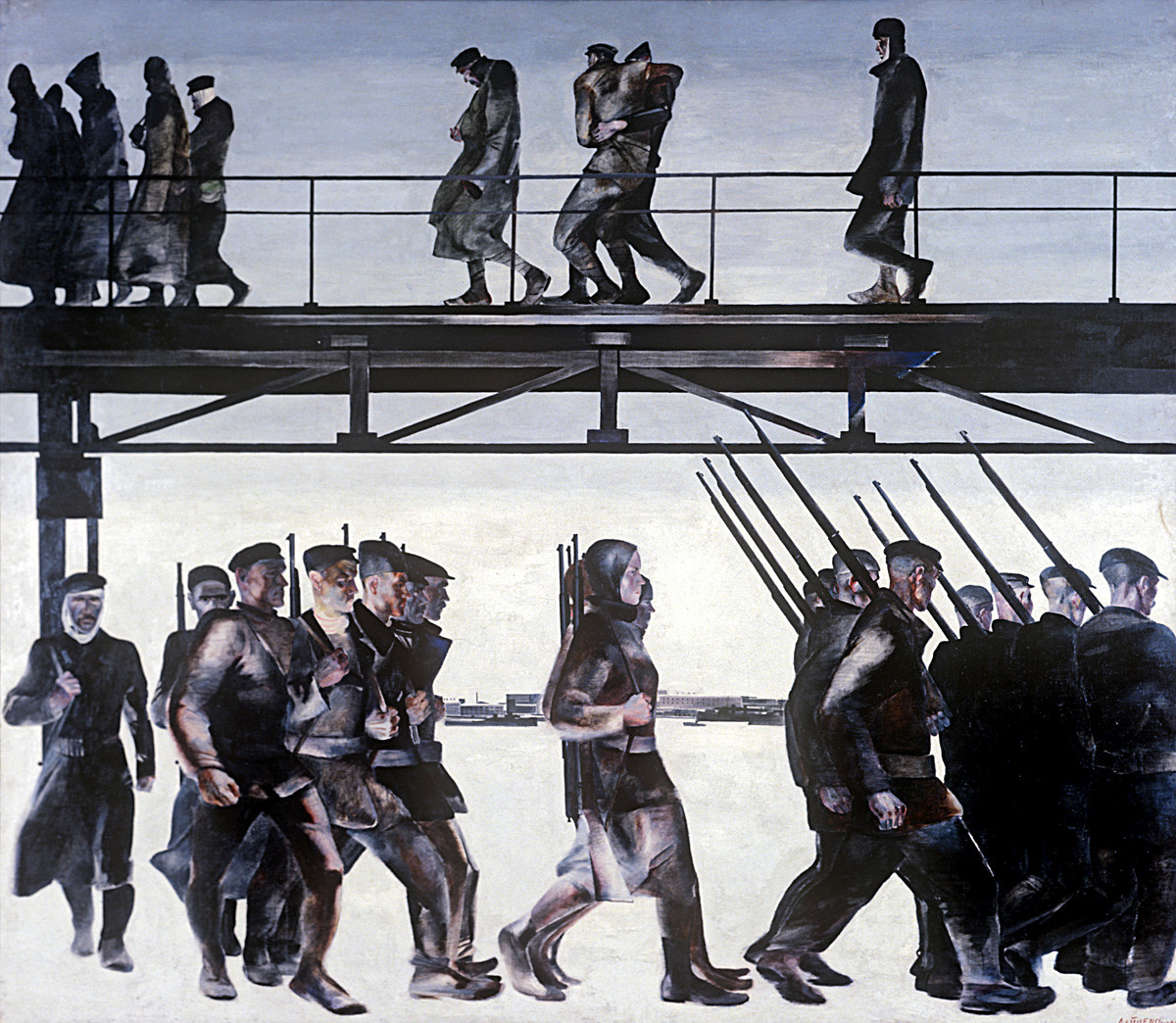 This is the painting that made Deyneka famous and determined the path of his artistic development, which could be summed up as trying to create the image of “a real Soviet person.” The artist himself said this was his favorite painting that he had created. He painted the characters on this canvass about the Russian Civil War from workers returning from their shift.

In the early 1930s, the artist entered a lyrical period that was also driven by the party agenda. By that time, the works of the avant-garde artists, who the Soviet authorities wanted to visualize the symbols of the new state and new period, had come under increased criticism. In 1937, the artists themselves were accused of being “formalists” and sentenced to oblivion for many years. That is why simple figurative images like this one, which were understandable to everyone, filled every public space from street banners to museum walls.

This is one of Deyneka's most famous and monumental (119 x 352 cm) works. Devoted to healthy lifestyle and sports, it is exhibited at the New Tretyakov Gallery in Moscow. Around the same time, he painted other famous works—Morning Exercises, Soccer Game, and Runners—that illustrate a famous Latin saying expropriated by the Soviet government: Mens sana in corpore sano (“a sound mind in a sound body” in English). 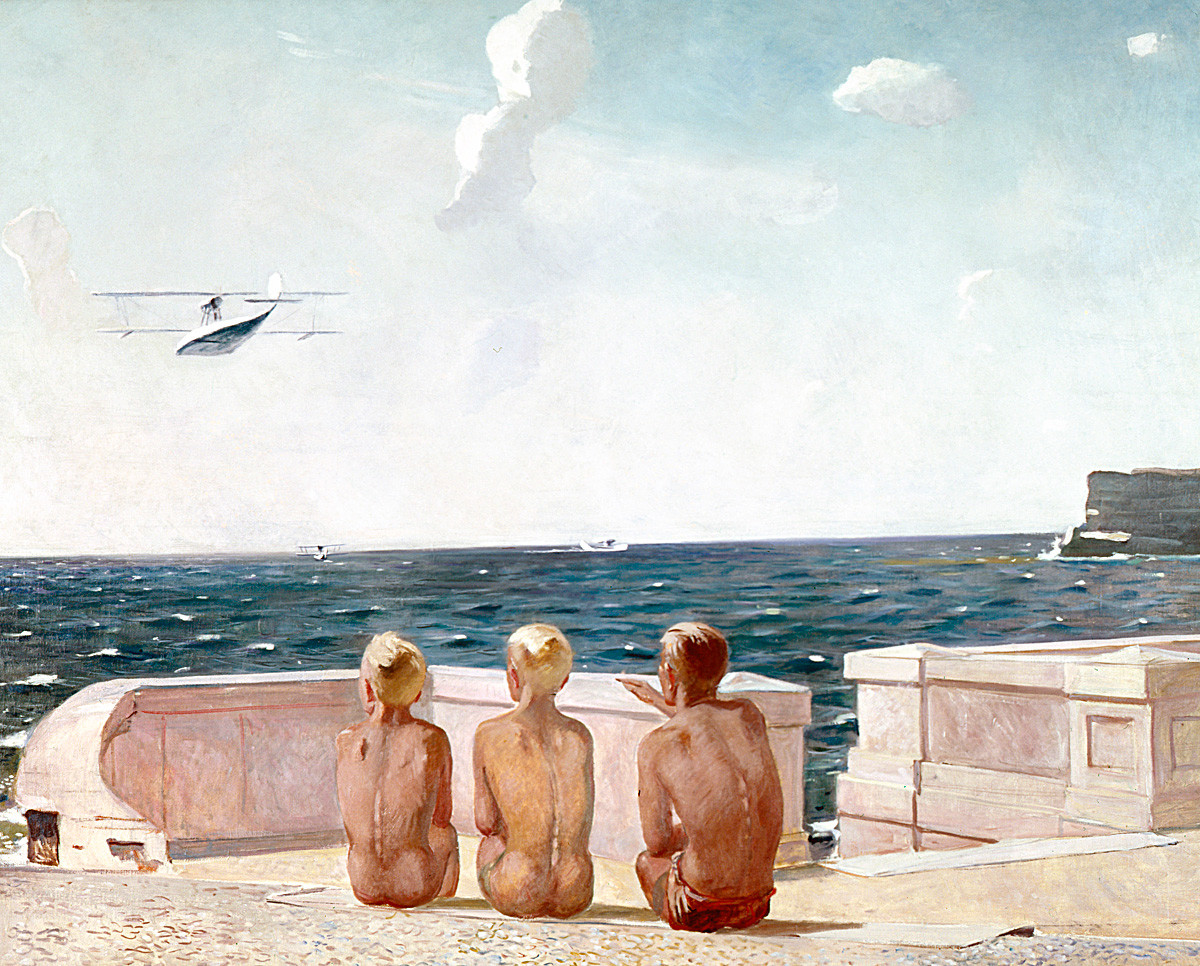 The Future Pilots promotes a happy Soviet lifestyle while at the same time romanticizing the military profession. The USSR needed to expand and strengthen its army and navy at the time. 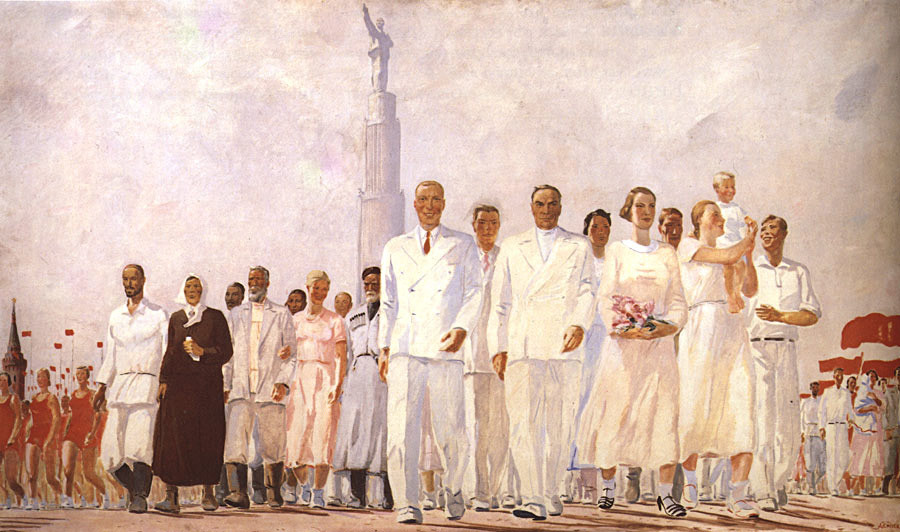 Unlike most Soviet citizens, an officially recognized artist had access to numerous benefits, ranging from endless state orders that ensured a comfortable existence to trips around the world. Together with other artists, Deyneka took part in exhibitions abroad more than once, including the Russian pavilion at the Venice Biennale. He also designed the Soviet pavilions at the World Fairs in Paris and New York. The Stakhanovites was one of the sketches for the 1937 Paris exhibition. 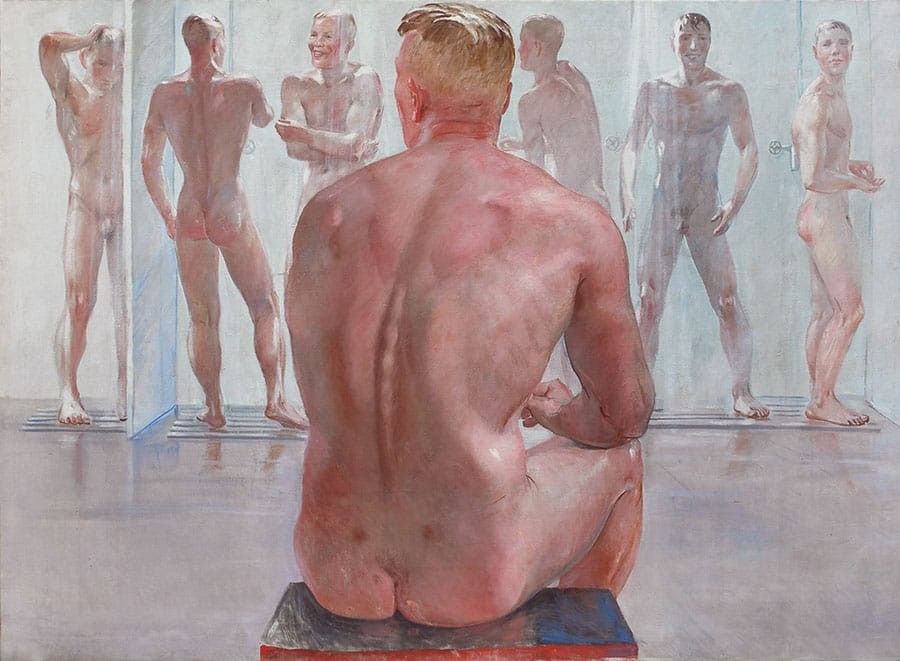 This painting was inspired by a photograph by legendary Soviet photographer Boris Ignatovich that he had presented to Deyneka. The artist thought the composition with an athlete in the foreground was perfection itself. However, he had difficulty transferring it to the canvas, and the painting took five years to complete. Deyneka finished it at the height of World War II, which is why the athletes in the title had turned into soldiers. 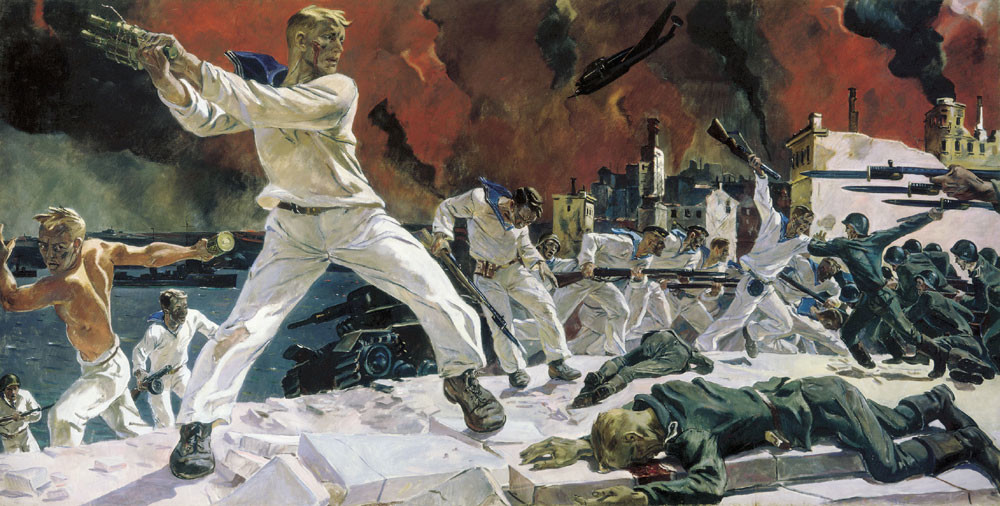 The artist did not fight in World War II. He traveled only once to the front with a colleague from Moscow to get first-hand impressions of the hostilities. Sevastopol, one of the main health resorts in the USSR, was dear to him because he associated it with memories of a carefree youth. “When I saw photos of the city in ruins, I knew I had to paint it,” Deyneka said at that time. The huge, four-meter-long, canvas devoted to the heroic defense of Sevastopol over six months is exhibited in the Russian Museum in St. Petersburg 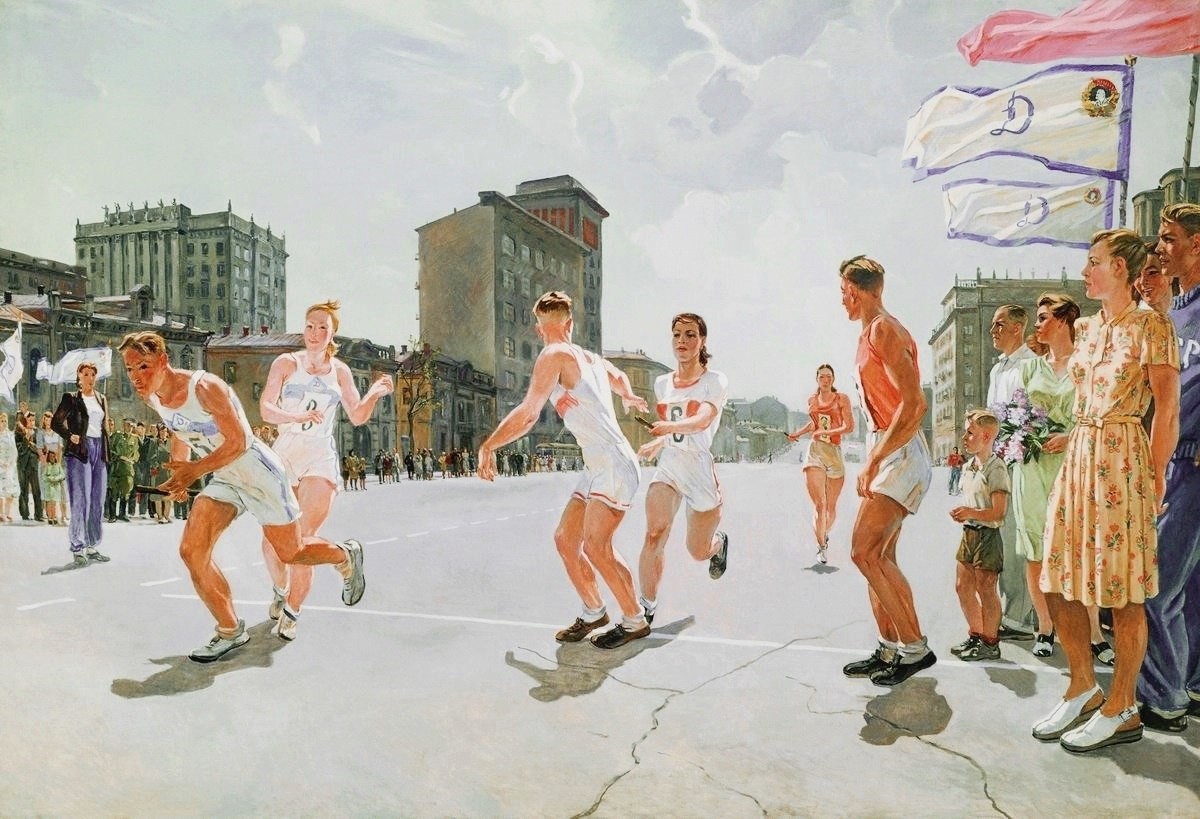 Visually, this painting is not much different from Deyneka’s pre-war work, but instead it depicts how the USSR was overcoming the devastating consequences of World War II. The canvas was immediately acquired by the Tretyakov Gallery and then traveled around the world, from Berlin and London to Havana and Sao Paulo. In 1958, it won Deyneka a Gold Medal at the World Fair in Brussels. 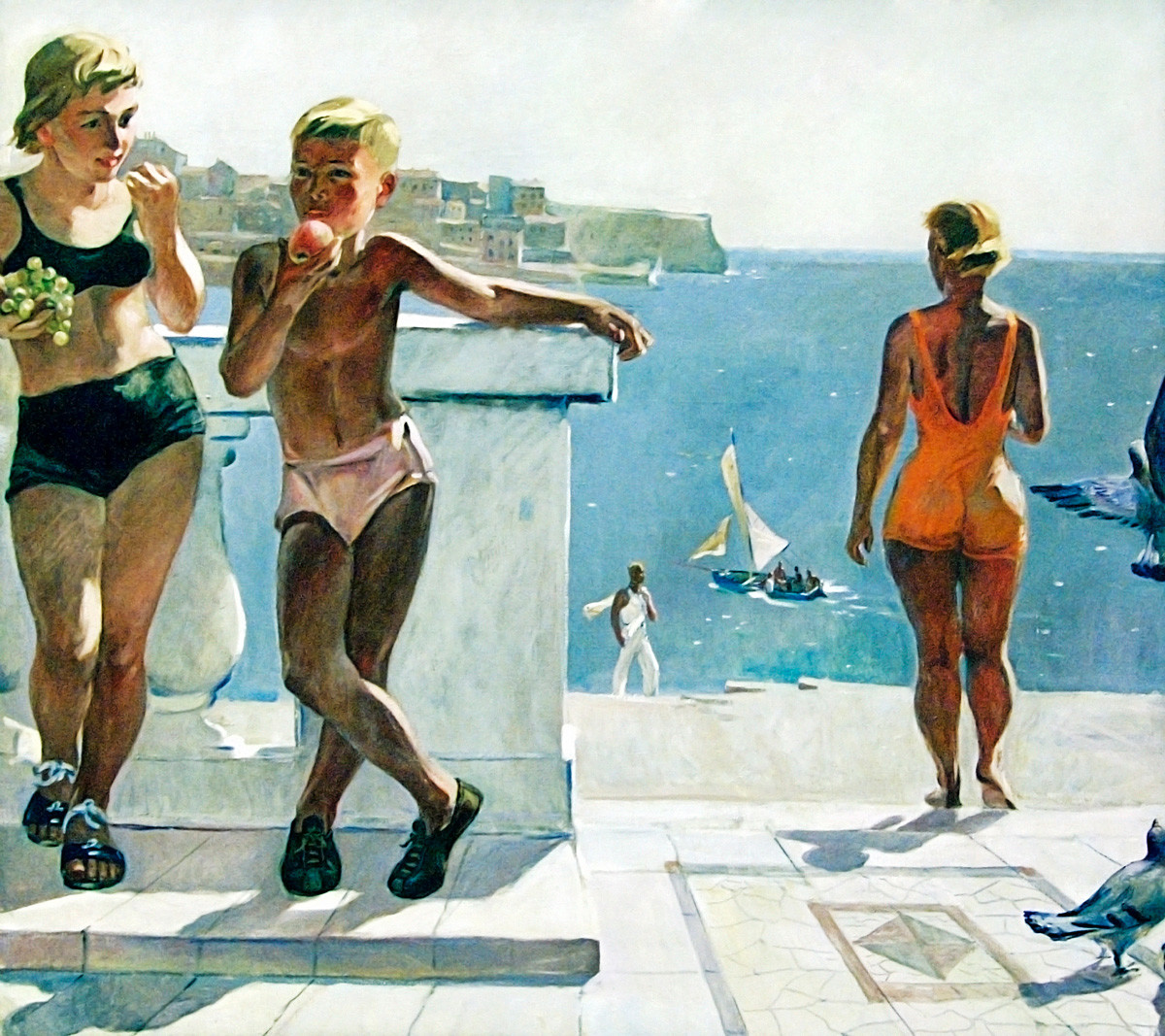 Right after the war, Deyneka became a member of the USSR Academy of Arts and remained faithful to his artistic style practically up to his death. He painted landscapes, domestic and work scenes, portraits, and enjoyed an incredible demand for his work. It is therefore not surprising that following his death in 1969, the market was flooded with numerous fakes, which continue to surface even now. In 2017, his painting Heroes of the First Five-Year Plan, a sketch for a panel for the World Fair in Paris, was sold at MacDougall’s auction in London for £2.8 million.

The largest exhibition of Aleksandr Deyneka's works in recent years, juxtaposed against works by another socialist realism legend, Aleksandr Samokhvalov, opened at the Manege Central Exhibition Hall in St. Petersburg as part of the 8th International Cultural Forum. It will run until Jan. 19, 2020.