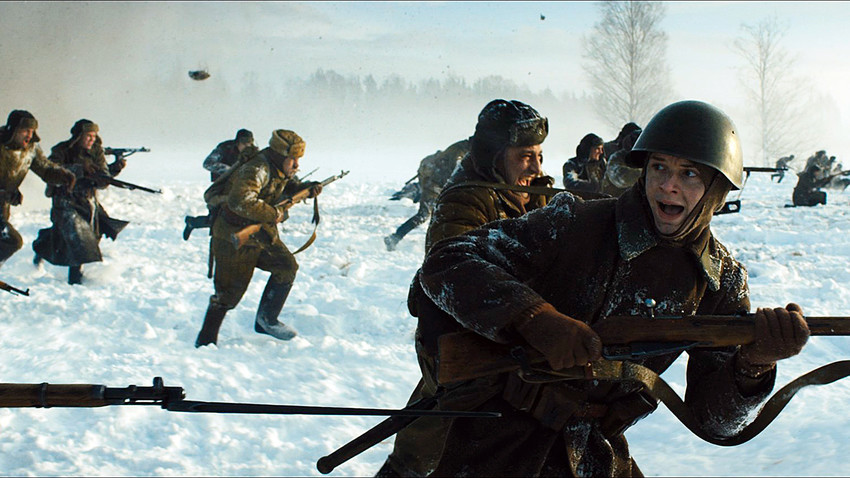 Igor Kopylov/«Triiks Media», 2019
In 2019, Russian filmmakers tried to amaze audiences with a Tarantino-style war action movie, a dark gothic thriller, a Michelangelo biopic and (yet) another WWI drama. We urge you to check them all out!

A cruel maniac serial killer has killed eight young women on the dark streets of 19th-century St. Petersburg. Officer Rostov, with the assistance of English psychic Olivia Reed, tries to stop this Russian “Jack the Ripper”. For Olivia, it’s a matter of life or death, since she feels she could be the ninth victim.

“St. Petersburg in the second half of the 19th century was a separate universe,” says the film’s director, Nikolay Khomeriki: “The main task during filming was to show the presence of the city’s mystique. Each shot had to have some mystical element and our cameraman perfectly accomplished the task.”

The Ninth is a great opportunity to check out how Russia’s most beautiful city looked like over a century ago, and follow the main heroes to its wonderful - as well as terrifying - places.

Not a year in Russia goes by without the release of a movie dedicated to the events of the Great Patriotic War against Nazi Germany. This year it’s Rzhev, which drags us into the war’s hardest and most exhausting battle in winter 1942, notoriously known today as the “Rzhev Meat Grinder”.

A Red Army company has suffered great losses, but despite this, is ordered to hold the Ovsyannikovo village at all costs, until reinforcements arrive. Heavily outnumbered, it seems like this battle could well be the last for them...

Rzhev has been proclaimed as an “extremely honest and truthful war movie”. Its creators also refused to bow to the ever popular trend in Hollywood these days to cast women in all leading roles. There’s not a single female character in it!

With the fall of the Soviet Union, an epoch of grandiose WWII movies, with breathtaking battle scenes, was also over. Sadly, many modern Russian war movies don’t have the same tragic drama, as before. Instead,  they’re love melodramas, like Stalingrad, or World of Tanks-style fairy tales, like T-34. However, it seems like, when making Red Ghost, the creators were inspired by Quentin Tarantino’s Inglourious Basterds.

During the Battle of Moscow, German troops were terrified by the mythical Red Army soldier, known as the “Red Ghost”. This mythical half-human, half-ghost could appear out of nowhere, cut down an entire enemy unit and disappear without a trace...

Unlike WWII, World War I is not a particularly popular topic in Russian cinema. The country doesn’t like to remember that war, which ended for it so disgracefully. A debut work by director Alexander Zolotukhin is an exception to this unwritten rule.

A Russian Youth is a story of a boy who is blinded in his first battle, due to a gas explosion. This tragedy, however, allowed his other senses to improve, and he is appointed to “listen” to the skies to warn the troops about approaching air attacks.

“Our task wasn’t to exactly restore historical events. The emphasis was made on creating an image of World War I. To show people: their thoughts, feelings, worries. These people had yet to go through revolutions, wars and catastrophes of the tragic 20th century,” - the director says.

A new Russian-Italian movie by Andrey Konchalovsky tells the story of Michelangelo Buonarroti. He is dragged into the chaos of fierce intrigues between two powerful families - Medici and della Rovere - who are both competing for the famous sculptor and painter. In addition, Michelangelo is suffering from his own internal conflicts and has to overcome demons of his own…

In July 2019, Russian President Vladimir Putin presented Pope Francis a DVD of the movie, declaring Konchalovsky one of the most famous and talented Russian directors.

Based on real events (as the creators claim), Wild League tells the story of the birth of football in Russia. General producer Igor Dobrovolsky claimed that the movie was inspired by the 2018 World Cup in Russia, when Russian footballers “not only demonstrated a perfect play, but heroically returned football to Russia.”

Set in the Russian Empire in the early 20th century, barge-hauler Varlam organizes the first people’s team in the country. However, football is considered an aristocratic game and to get into this elite world is not easy...

Another football-themed movie released this year is devoted to the greatest (as many believe) goalkeeper in history, Lev Yashin. He saved 150 penalty kicks and kept over 270 clean sheets in his career and was the only goalkeeper to win the prestigious Ballon d'Or award.

The movie itself had a turbulent production phase. It took almost 10 years to make. Filming dates were often postponed, the script was rewritten more than once and the financing was always lacking. Even President Vladimir Putin and the Russian government stepped in, in the hopes of trying to accelerate it. Because of all this, Lev Yashin’s release date missed both the 2018 World Cup in Russia and the goalkeeper’s 90th anniversary on October 22, 2019. The movie only hit the screens in late November.