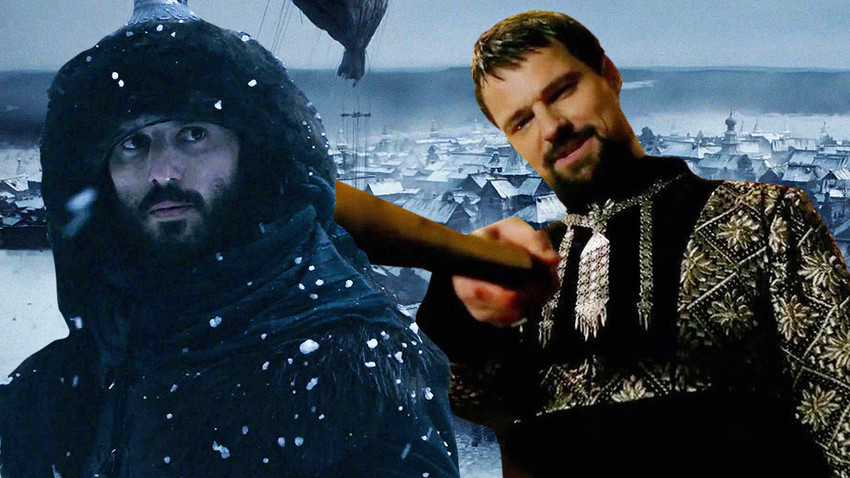 History Channel, 2019
Vikings totally messed up with its ‘historical’ depiction of Kievan Rus’, but it seems that the TV show’s makers did it on purpose.

We’ve been waiting for this TV show’s return for the whole year - and finally, we got what we wanted: on December 4, the History channel released the first two episodes of Vikings’ concluding 6th Season.

After watching them, many fans around the world had conflicting views. On the one hand, the show was perfectly produced, as in previous Seasons: beloved old and interesting new characters, intense intrigue and good action sequences. However, one thing forced many people to facepalm - the absolutely absurd depiction of Kievan Rus’, a predecessor of Russia, Ukraine and Belarus.

It’s hard to expect total historical accuracy from the TV series telling us about semi-legendary characters from mythical Scandinavian sagas. That’s why some mistakes were easily forgiven by fans for the sake of a good story. We were okay that in Vikings Rollo and Ragnar are brothers, Sigurd was killed by Ivar, and even that Wessex soldiers wore burgonet helmets from the Italian Renaissance. Oops.

And there weren’t many critical mistakes we could find throughout the long first five Seasons of the show. However, with the 6th Season, the inconsistencies became too glaring to ignore. And all of them were connected to the once mighty state of Kievan Rus'. 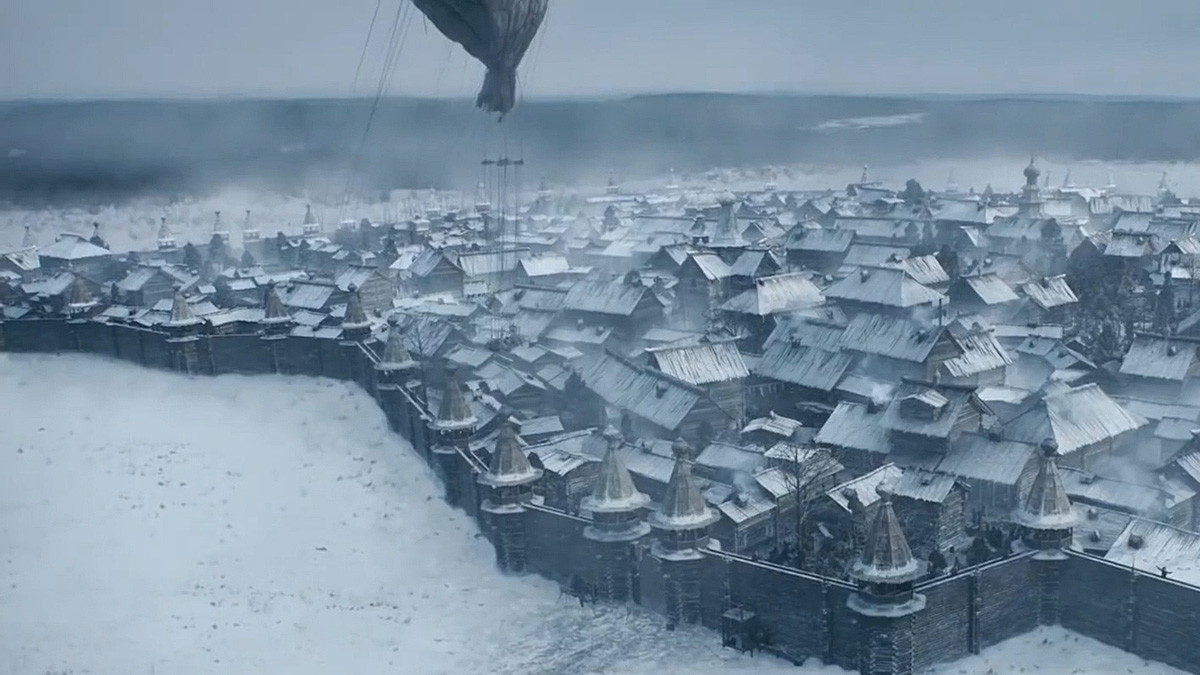 As we know from the Season 5 finale, Ivar lost the battle for Kattegat to his brothers and fled. He traveled along the Silk Road, saw amazing places, exotic animals and unusual people, before his wandering brought him to Kievan Rus’. And that’s where the first facepalm happens.

Kiev seems to be in the period of harsh winter, covered with impregnable snow, and suffering from freezing temperatures. That seems fine, until the narrative takes us to Ivar’s brothers in Kattegat in Scandinavia, where (what a surprise!) at the same time there is no snow at all, but a rather comfortable autumn. *facepalm*

It would be great if the writers would take a look at the map to see that, in fact, Kiev lies much further south of Scandinavia, and usually has mild winters. What we see depicted here is the eternal cliche that it is always winter and snowing in Russia. All we need is bears for the complete flawed stereotypical picture… There is a small hope that maybe the events in Kattegat and Kievan Rus’ are actually happening at different times? I really hope so. *facepalm*

Mongols instead of Russians

Attention! When you see the Kievan Rus’ warriors for the first time in Vikings, you may actually hurt yourself with the strongest facepalm in your life. Dressed in oriental armour of the nomadic Khazar, Pecheneg or Mongolian cavalrymen, they perform Cossack-style acrobatics on horses during the attack. *facepalm*

If you’ve played Assassin Creed, you’ll know what the personal guard of the Kievan Prince looked liked (applying the Vikings reality, of course). Asian warriors dressed in all black, with only their eyes visible. Prince Oleg, dressed in something which looks like an ornate national Tatar costume isn’t far from this erroneous depiction. *facepalm*.

In reality, it was hard to separate a warrior in Scandinavia from those of the Kievan Princedom in those days. Kievan Rus’ warriors were, in fact, northmen. Varyags (that’s how vikings were called in Eastern Europe) raided the Slavic lands, settled there, served as mercenaries and were then elected as rulers. Just like Oleg the Prophet in Season 6, portrayed by Russian actor Danila Kozlovsky. 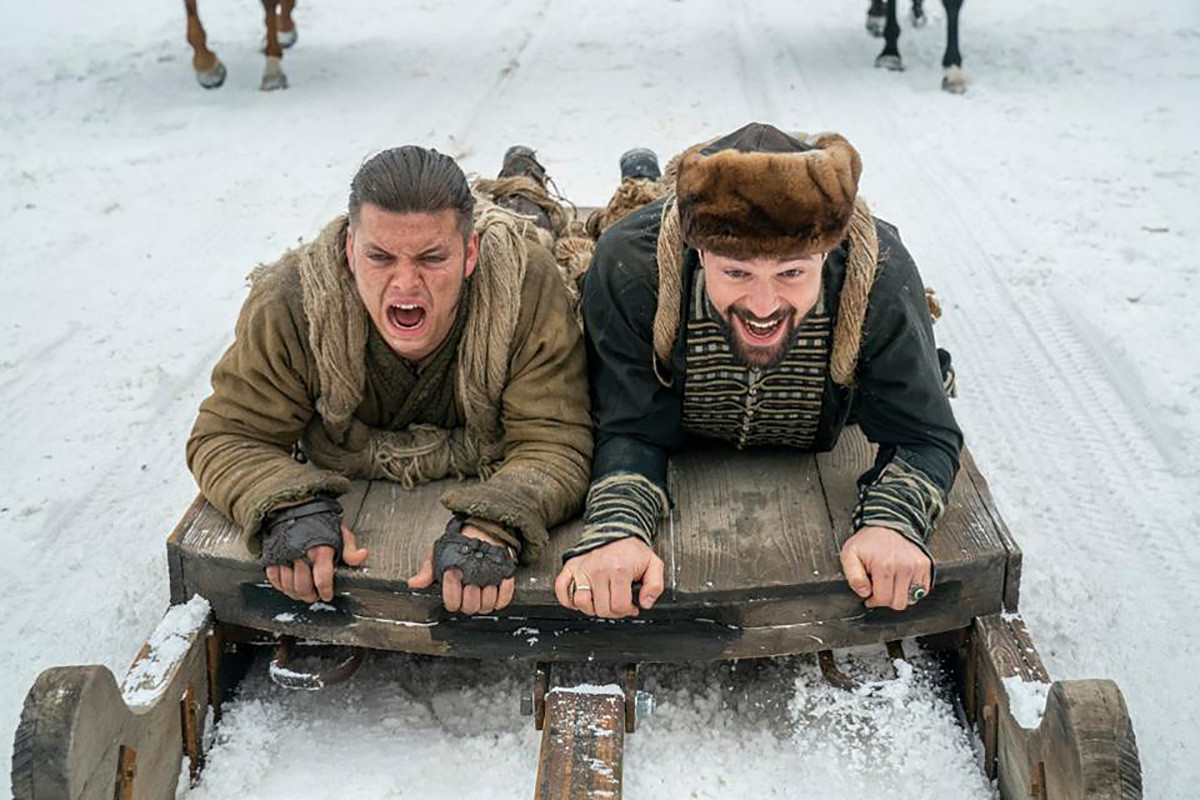 It’s well known that the hot-air balloon was invented in the early 18th century by the Montgolfier brothers. But that’s not the case in the Vikings universe.

Here, we observe such a balloon peacefully floating over Kiev, and Oleg and Ivar even take a ride in it. And it wouldn’t be surprising if this balloon also served as an observing post for spotting targets for Slavic artillery. *facepalm* Nothing’s impossible in the Vikings!

As a work of fiction inspired by historical events, Vikings often blatantly substitute facts. The Kievan Rus’ during Oleg’s rule in the late 9th-early 10th century was a pagan country. Christianity only came over 80 years after his death. I’m sure Oleg would be very surprised, if not angry, if he knew he was turned into a Christian by the TV show’s writers! *facepalm*

The other inaccuracy is his conflict with Princes Askold and Dir, who, as Vikings shows, ruled in the northern city of Novgorod. In fact, it was Oleg who ruled in Novgorod, and then went to Kiev, slaughtering the Princes and capturing the city. *facepalm*

And I feel I must mention another fail in regard to Novgorod. That huge city is shown merely as a small outpost hidden deep in the forests… *facepalm*

To conquer Scandinavia? Why?

Well, it’s one thing to play with historical facts for the sake of a good story, but another to act against logic. Prince Oleg told Ivar that he had held military campaigns against Constantinopole (which is historically correct), but after that, he declared his new “brilliant” plan - which was to switch his geopolitical intentions from the East (Byzantine) to the West (Scandinavia). The Kievan ruler said he wanted to capture the lands of his forefathers.

Only one question rises - why? Why, instead of rich warm lands of the Black Sea shore, one would go to the cold, stony, fruitless territories of the north? There was nothing to gain there, only mass hunger and becoming prey for the acclimatized northmen. Vikings even conquered the hot island of Sicily to never return to their frozen homeland. They would laugh hard if they were told somebody wanted to capture their lands. 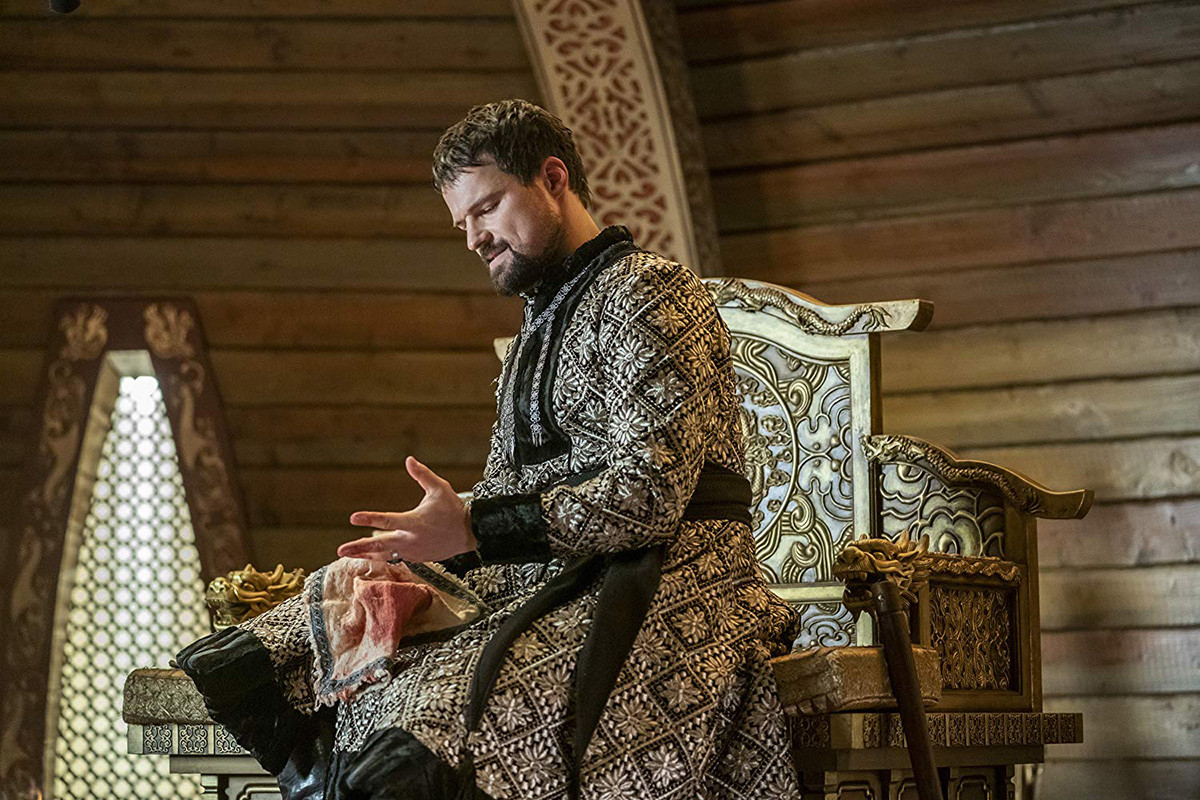 ButVikings writers thought otherwise. According to the trailer, we’re told to expect D-Day style landings with thousands of sceaming Mongol-style Kievan Rus’ warriors on the coasts of Scandinavia! *facepalm*

Such glaring mistakes offend the eyes. But why were they made? It’s hard to believe that the TV show’s creators just failed to find the correct information. Surely, they could hire experts or even ask the advice of Danila Kozlovsky and Katheryn Winnick (Lagertha), who is of Ukrainian origin. *facepalm*

It seems, there are two explanations for this. The first is political. Rus’ (read “Russia” here) is specifically shown as a cruel wintery country in the east, completely different from Western civilization. Russians are portrayed as ruthless by nature. Just look at Prince Oleg. He likes to torture people and literally tears them apart. You look at Russians in Vikings, but see Mongol hordes instead, an actual dangerous power historically that one should be afraid of. A good image in the Hollywood “propaganda war” (and in this particular case Canadian and Irish cinematographers), which will be memorized in the audience’s subconsciousness. 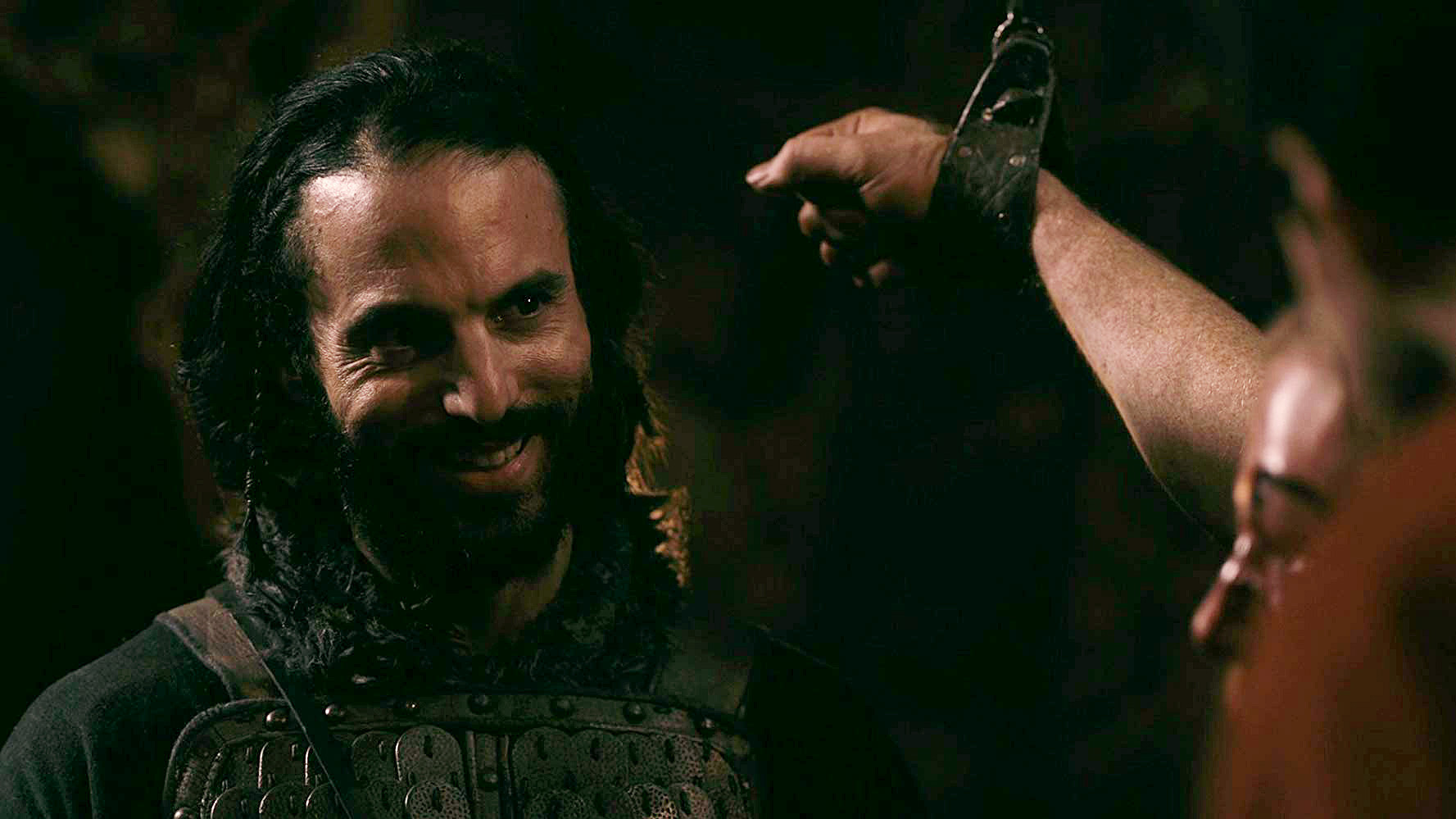 The second explanation doesn’t involve any sinister plots by the West. The Kievan Rus’ image was most likely changed only to make the final Season more interesting. For five Seasons, we’ve seen how vikings fought rather similar enemies: Saxons and Franks (who look like twins) and other rival northmen. And to make their new opponents - the Rus’ - look like vikings (as they actually did) would bring to the TV show nothing ‘new’, but make them - and the show - boring, dull and repetitive. Instead, we got an interesting mysterious (although absurd) oriental princedom of, as one YouTube user dubbed, “Chinese-Mongolian Georgians”, who like to fly on 18th-century hot-air balloons.

So, from a (more or less) historical TV show, Vikings literally turned into some kind of fantastical fairytale. But, let them be! Forget about all these silly inaccuracies and just enjoy the show!