Why the only Bolshoi Theater school outside Russia is in Brazil 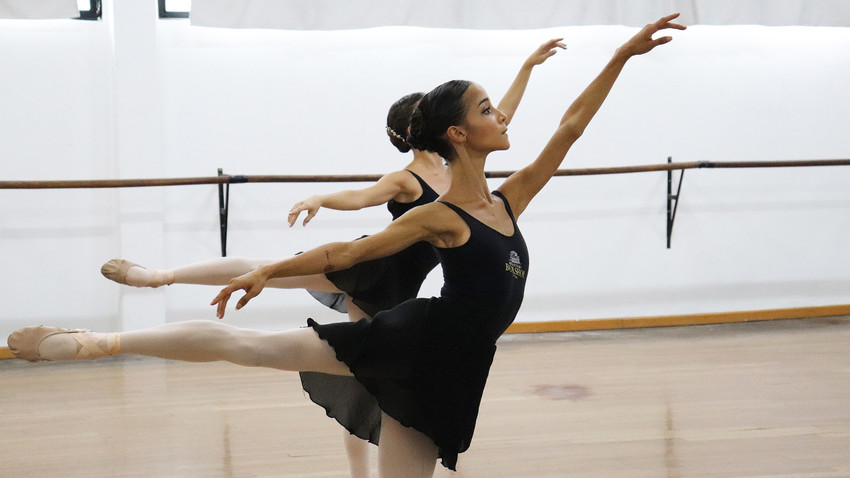 Personal archive
Twenty years ago its founders included leading Moscow ballet masters, and today a number of its alumni dance at the Bolshoi and in European and American ballet companies.

The Brazilian city of Joinville in the state of Santa Catarina is the only place in the world with a Bolshoi Theater ballet school. How did its former students end up being hot property throughout the world? Russia Beyond talks to classical dance teacher Anna Koblova, graduate of the Moscow State Academy of Choreography and the Russian Academy of Theater Arts, and a dancer with the Bolshoi, who imparts the benefit of her experience to ballet students in Brazil.

Moscow and Joinville are thousands of miles apart. Why was this small Brazilian town chosen for the establishment of a Bolshoi Theater school?

Joinville is an industrial city in the state of Santa Catarina, one of the largest and most prosperous regions in Brazil. In the late 1990s the state governor was Luiz Henrique da Silveira, who devoted his energy and enthusiasm to the promotion of culture. 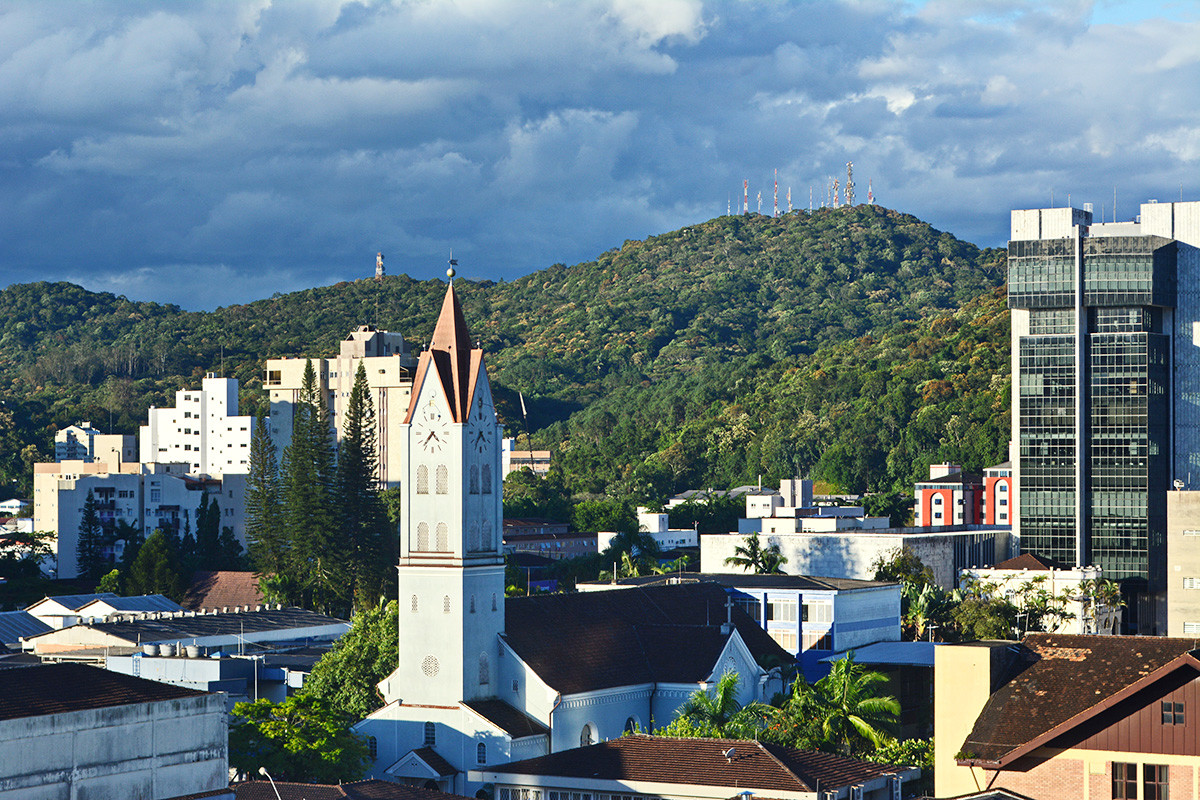 The Brazilian city of Joinville

Joinville was the venue for one of the biggest dance festivals in Brazil, which embraced various fields of choreography - modern dance, classical dance, urban dance, national dances and hip hop.

Luiz Henrique da Silveira realized that since the city was hosting a festival of this kind, it also needed a ballet school with its own theater. He was a maximalist, and, once the idea had taken hold, he decided that, since the Russian school of ballet was regarded as the best in the world, a Russian ballet school needed to be set up in Brazil. He went to Moscow and managed to arrange a meeting with Vladimir Vasiliev, who was then the general director of the Bolshoi Theater.

Vladimir Viktorovich [Vasiliev] backed the idea. It was a period of economic upturn in Brazil, there was a lot of oil money about and the school was literally built in a year. It was treated as a social project. The idea was to build a theater immediately afterwards to create an integral complex, as happens in the world’s biggest ballet capitals, with the school supplying the theater with its own dancers. But Luiz Henrique da Silveira died a few years ago without seeing the project completed. Nevertheless, I think that the city realizes its importance and I believe that it will be implemented, only later than originally planned.

Does the school continue to function as a social project?

Our students are children from poor and disadvantaged families and also, simply children with an aptitude for ballet - they all have to meet the entry requirements, with 120 applicants competing for each place. 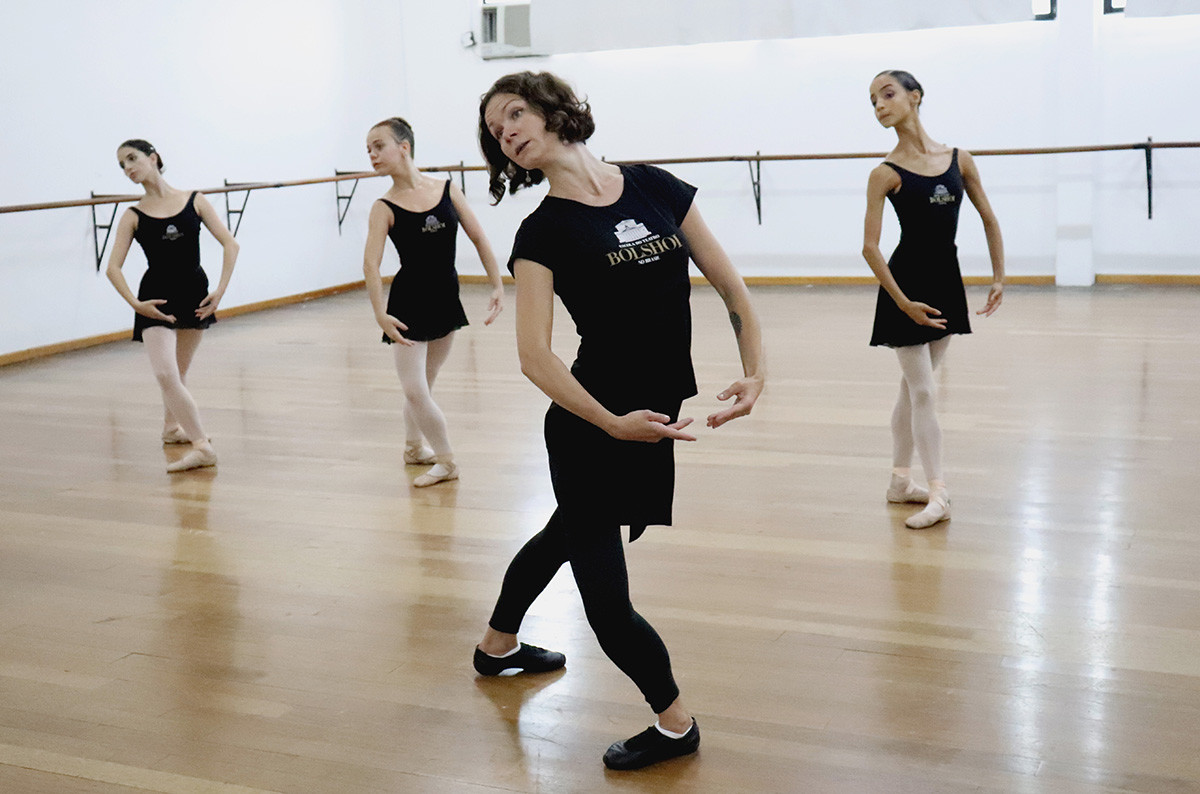 Anna Koblova and her students

The school pays for the students’ meals, school uniform, medical provision, library and all teaching materials - the children are fully provided for during their eight years at the school. But they are under a huge amount of pressure. In the junior years, the first half of the day consists of ballet education, while the pupils have their general education classes in another school in the second half of the day. The senior pupils do things the other way round: General education subjects in the morning, and specialist subjects and rehearsals in the evening.

These days, the school does not just take entrants from Joinville or Santa Catarina - we have students from the whole of Brazil, and even from Paraguay, Uruguay and Argentina, and they all qualify for financing by the state of Santa Catarina and sponsors.

So the school enjoys private support as well as state subsidy?

Of course. State support would never be enough on its own because the ballet school has a lot of outgoings. Individual and corporate sponsors and backers help out, and these are not just Brazilian corporations - any individual who is so minded can become a backer. And assistance can come not just in the form of financial sponsorship, but also through donations made via bills for services. For instance, anyone can set up an option whereby when paying utility bills an extra two reals ($0.47) are remitted to benefit the Bolshoi Theater school. 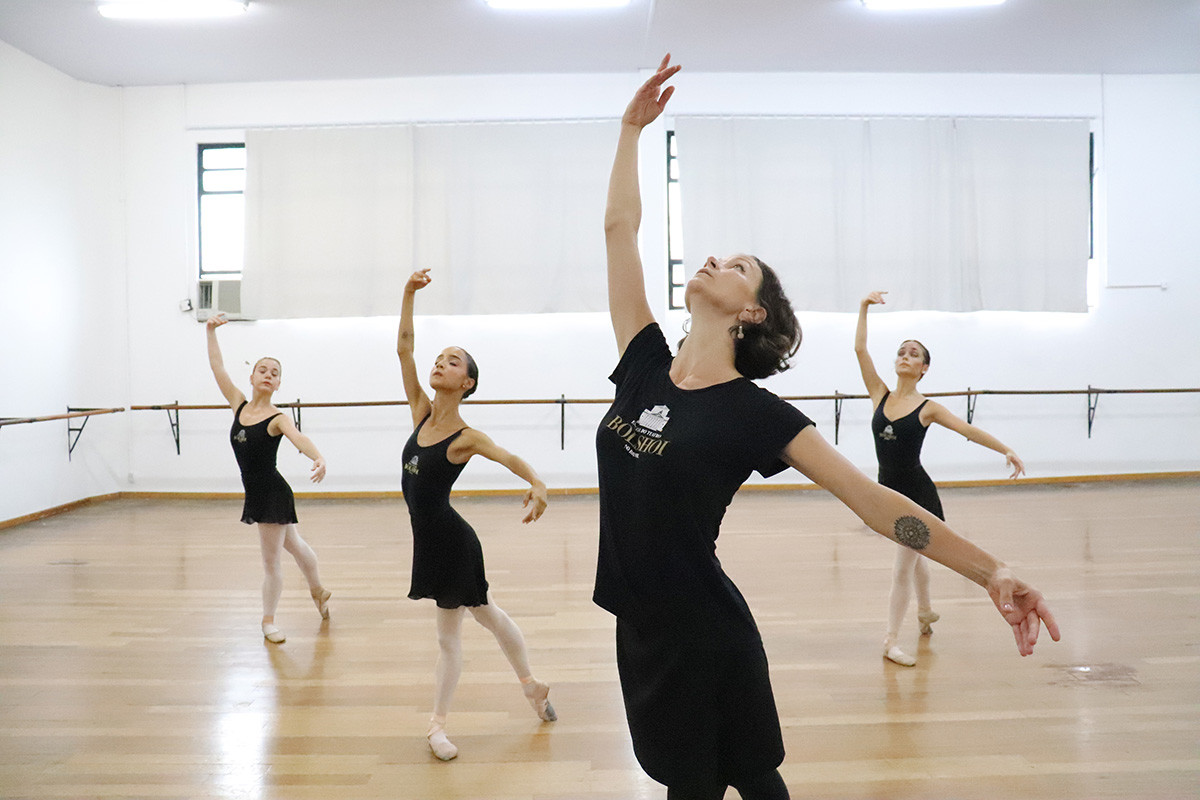 Anna Koblova and her students

In this way, the school has a large number of backers, and people feel involved in our work. This allows us to be completely honest in our tuition - there are no additional factors such as school fees that might influence the teaching process. If a child has ability, they pursue their studies, but if their abilities are inadequate, they leave the school. Naturally, the state allocates funds for a predetermined number of pupils, but with the entrance procedure that we operate there are always candidates to fill any free places that might arise.

Of course, the ballet education process is a difficult one. For instance, we have an intake of 20 girls for first grade. But this year nine girls got as far as graduation. The number of boys who graduated was 11, and it doesn't make sense to end up with more boys than girls at the school.

Given that Brazil’s principal theaters in Rio de Janeiro and Sao Paolo are practically non-operational, do you help your graduates to find work after they have left school?

It is a source of pride for our school that around 75 percent of graduates find work according to their calling, and mostly as soloists, with only a few staying in the corps de ballet. Usually the best graduates remain in the “Young Ballet” that operates at the school. They flesh out their repertoire, take concerts and productions on tour and are paid a salary that they usually save to be able to travel to future auditions at theaters abroad. 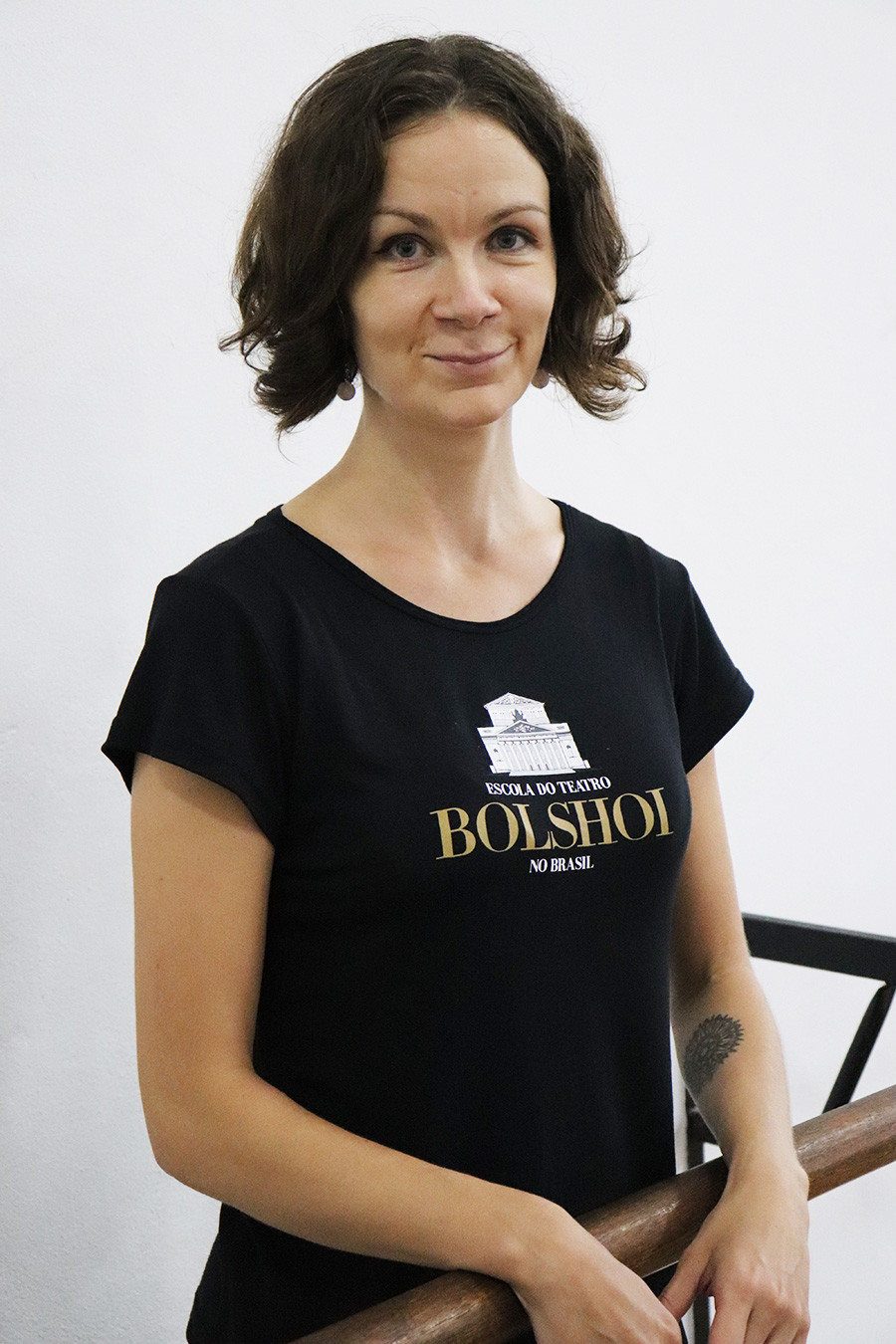 According to statistics, there are now graduates of the school in all German dance companies. Our people are present in the American Ballet Theater, in the former Maurice Béjart company in Switzerland, in Kazan and in Yekaterinburg. The school’s website has a section with information about all prospective auditions with American and European ballet companies. What is more, when our graduates leave, they remain in contact with the school, so that if any vacancies become known the information is invariably made available. Another work-placement opportunity is afforded by competitions. The ideal situation is the one that occurred in Perm, 18 months ago, when our team arrived to take part in the Arabesque ballet competition that was being held there - the upshot was that several people got offers from the Perm Opera and Ballet Theater company.

Does the school keep up its links with the Bolshoi Theater today? Do you have to demonstrate your professional standards in some way in order to maintain your status as a Bolshoi Theater school?

First, our students are taught according to a program that is identical to the curriculum of the Moscow State Academy of Choreography, and pursue the same disciplines - classical dance, folk dance, duet dance, ballet history, theater history, contemporary choreography, repertoire and concerts. The school’s artistic director is Pavel Kazaryan, who, like me, started his career at the Bolshoi. Last year our teachers, many of whom are graduates of our school, went on secondment to the Bolshoi Theater. In other words, there was an opportunity to correlate the activities of the school with processes going on at the Bolshoi. 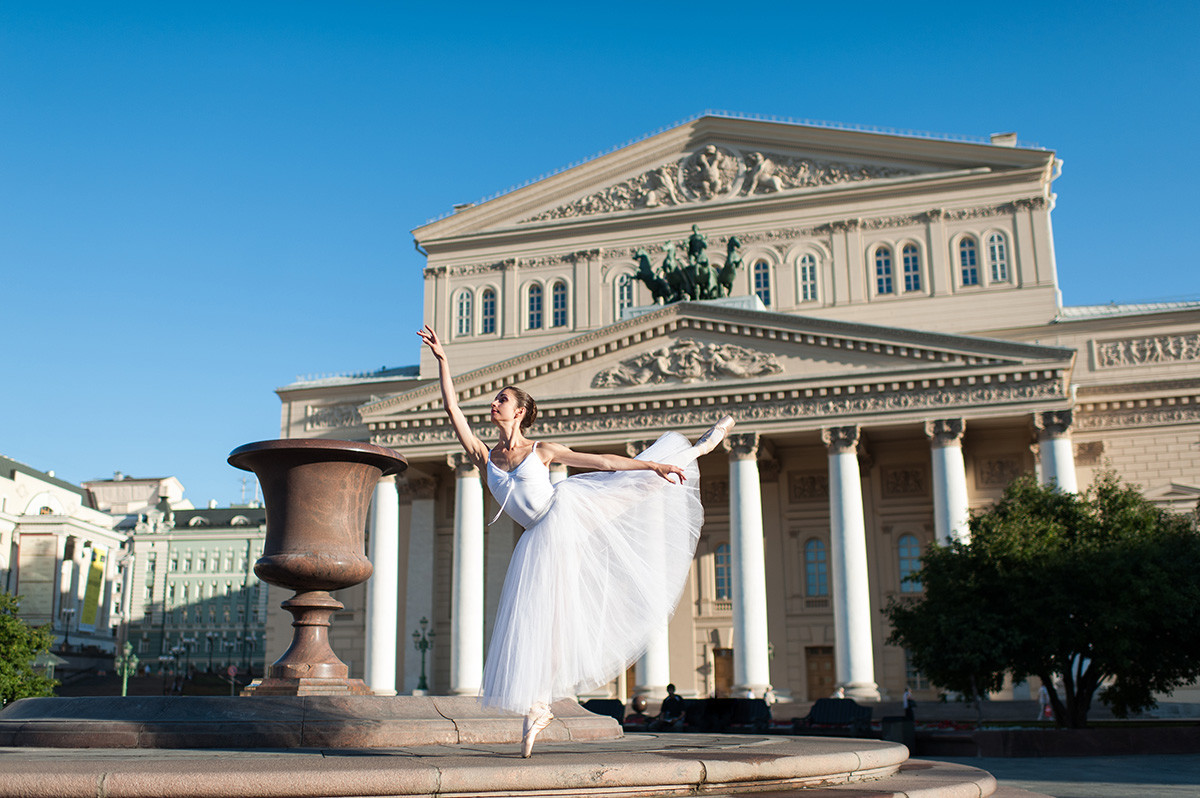 I regard myself as an intermediary between Brazil and Russia as I was taught by Nina Semizorova at the Russian Academy of Theater Arts and Svetlana Adyrkhayeva at the Bolshoi. The male classes at Joinville are conducted by Dmitry Afanasyev, a former Bolshoi soloist. Galina Kravchenko, who was the patron of the school until 2017, has unfortunately passed away. The school is aware of the enormous support provided by the Bolshoi’s international brand. But that requires the school to live up to this association. I can say on my own account that I am aware of this not just in class but also in my personal life.