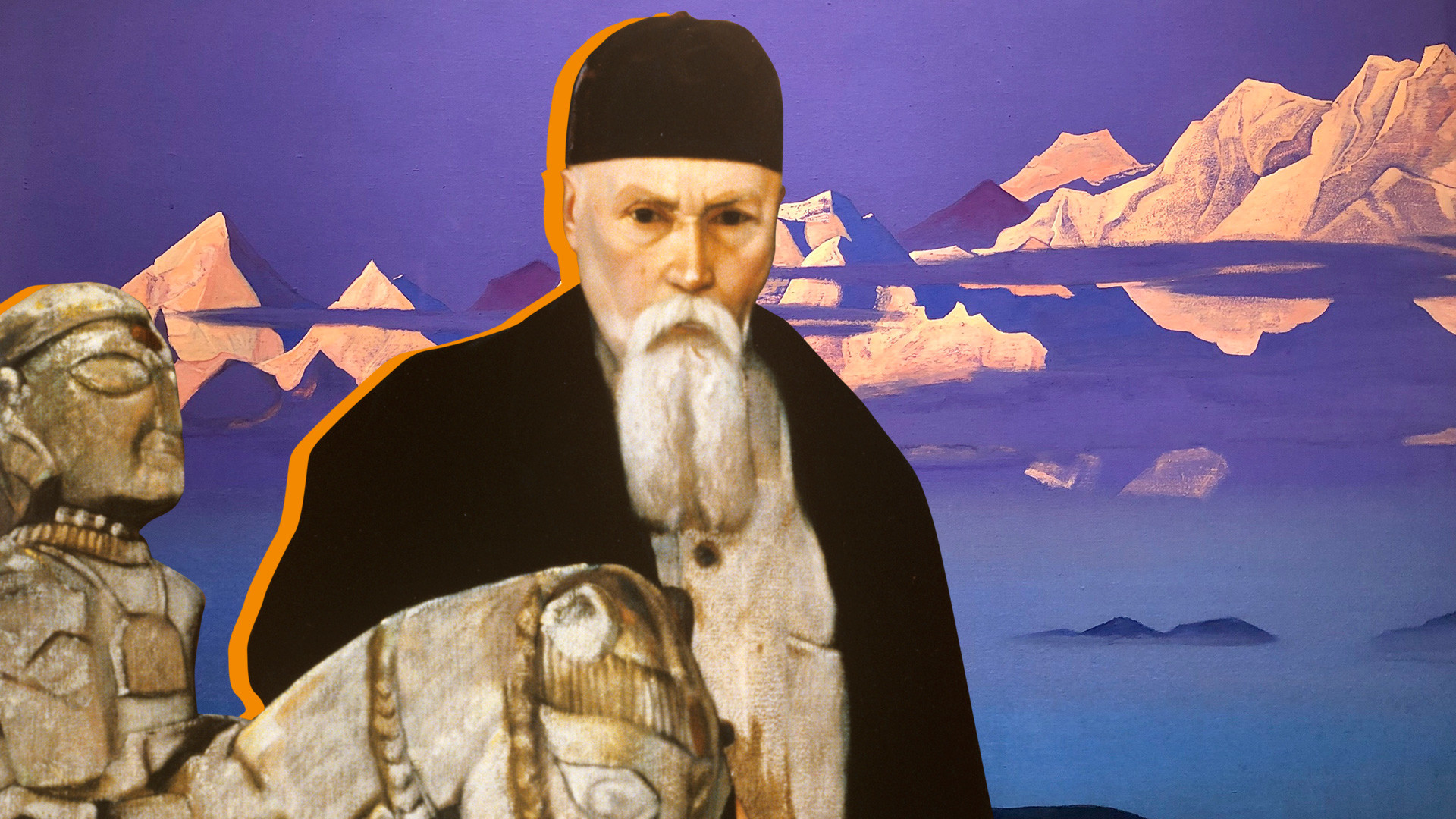 John Varoli, Alexander Krasavin/Sputnik
The Nicholas Roerich Museum in Manhattan is North America’s only institution dedicated to the heritage of the great Russian Symbolist painter. While the museum is a treasure trove of the artist’s works, few New Yorkers, or Russians, even know it exists.

Soon after the Bolshevik seizure of power in November 1917, Russian artist Nicholas Roerich (1874-1947) fled St. Petersburg and sought refuge in Finland, then London, and finally made his way to New York in October 1920, staying and traveling around the U.S. until May 1923. A large exhibition of Roerich's art, which was organized by the Chicago Art Institute, began in New York in December 1920 and which subsequently toured the country.

During Roerich’s time in the U.S. he founded the Master Institute of United Arts (an art school in New York) and the Roerich Museum, which opened in November 1923 at a location overlooking the Hudson River (310 Riverside Drive, Manhattan’s Upper West Side).

Like many other talented Russian emigres who fled the Revolution, Roerich quickly found admirers among New York City’s rich and powerful. Some patronized his art endeavors and were enthralled with his progressive ideas of world peace and spiritual harmony. 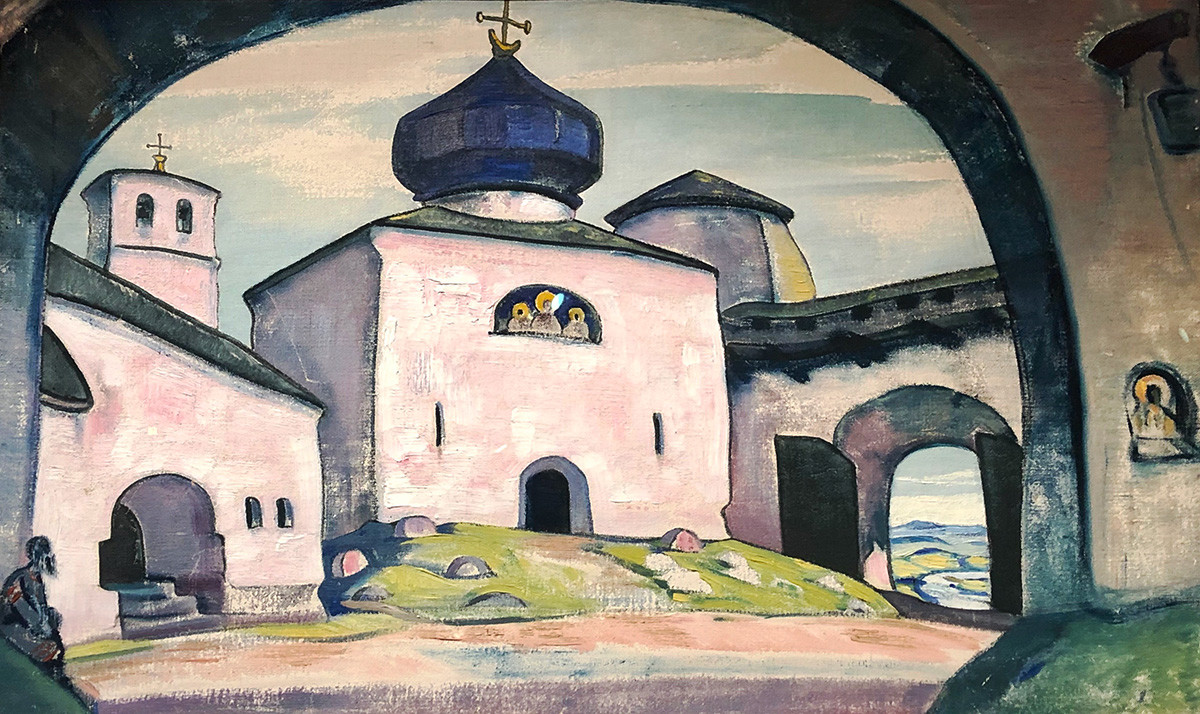 “When he was out of the country, he kept close in touch with his organizations in New York City, and directed their activities to the smallest details,” says Gvido Trepsa, director of the Nicholas Roerich Museum. “While I’d not say he was ‘very’ popular, the fact is that his name appeared in newspapers and magazines quite often. He was certainly much more of a ‘celebrity’ than today.”

During his travels in the U.S., Roerich made trips to New Mexico in the American Southwest (Aug-Oct 1921), as well as to Monhegan Island, a part of Maine, in the American Northeast (July-Aug 1922). He always painted along the way, and many of these works can now be seen in the museum in Manhattan. In the American Southwest, he met and became close friends with Dr. Edgar Lee Hewett, one of the most prominent figures in American archeology, ethnology, and museum affairs. 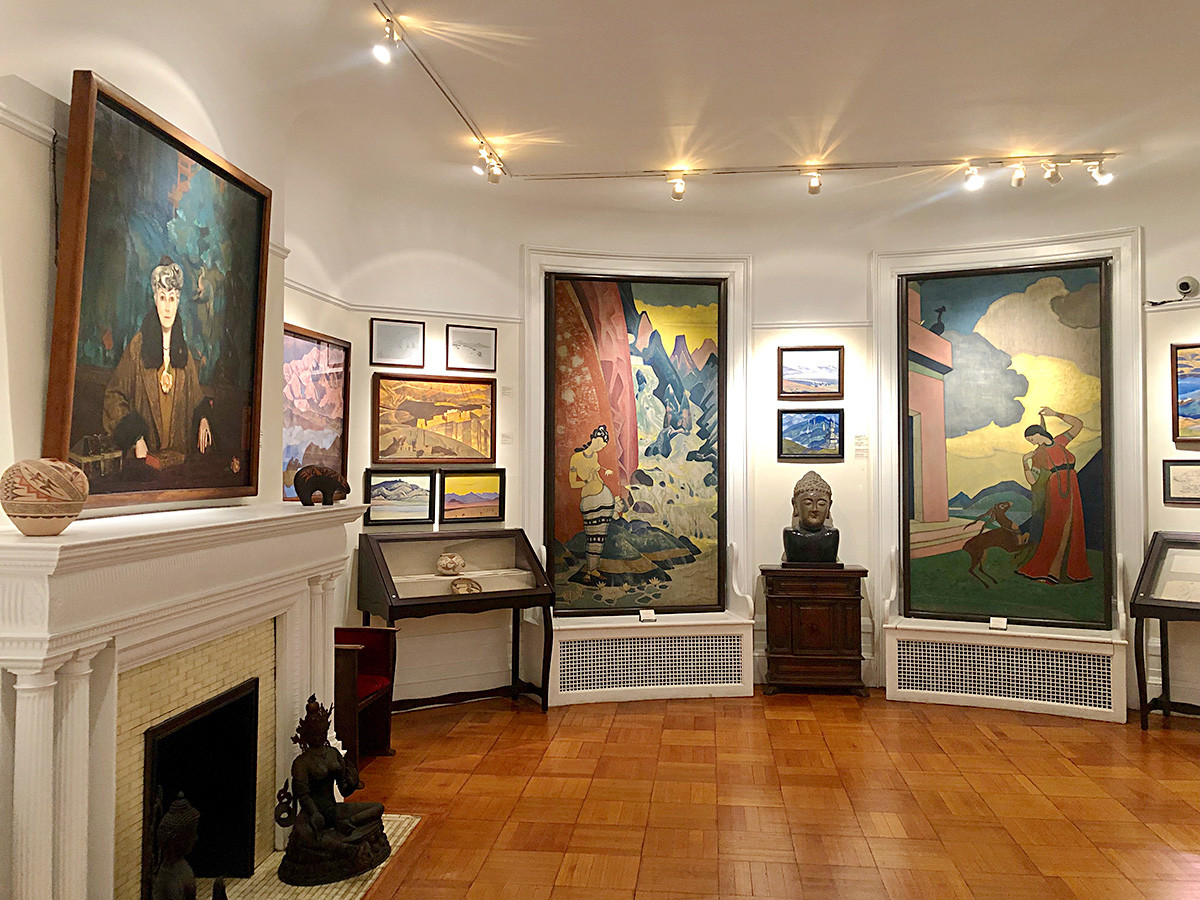 Interior of the museum

After departing New York in 1925, Roerich embarked on one of his greatest journeys: Together with his wife, son George and six friends, Roerich began his legendary four-year Central Asian expedition that went through the Karakoram Mountains, Punjab, Kashmir, Altai, Mongolia and Tibet. The route of this expedition was so complex and unusual that it attracted concern and interest from Soviet, American and British spy agencies. 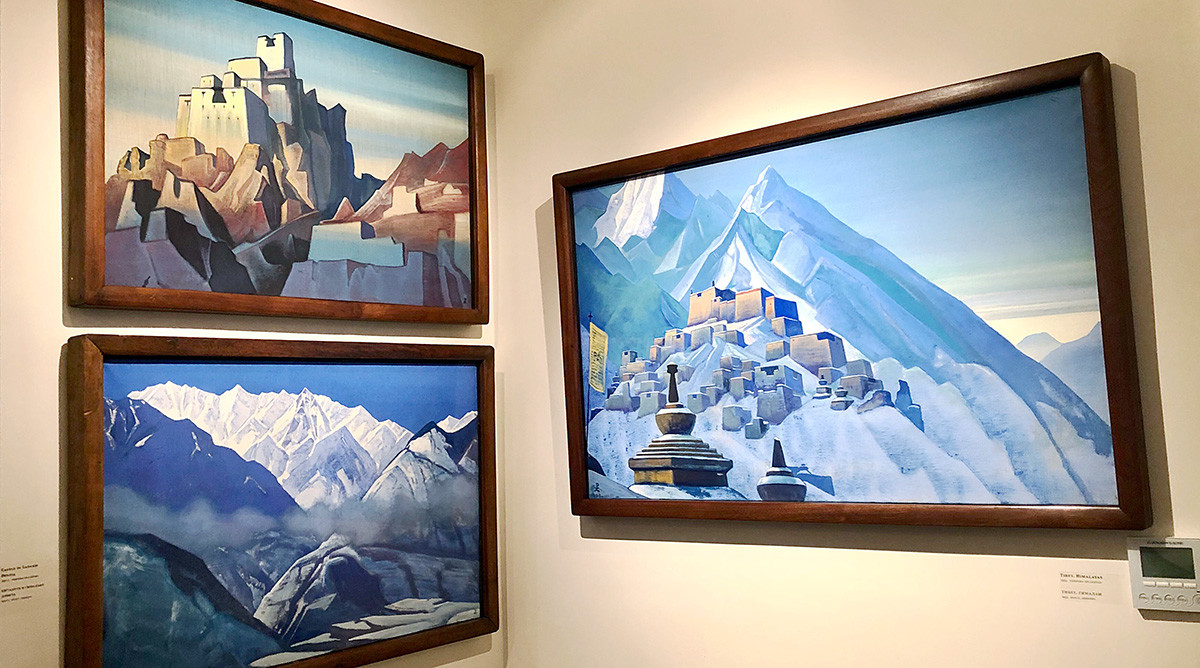 Drawings of the Himalayas

While little-known today in the U.S., Roerich at the time was what we’d now call a “poster child” for world peace and understanding. In fact, he was nominated for the Nobel Peace Prize three times and created the Pax Cultura - the “Red Cross” of art and culture. This effort led to the U.S. and the 20 other nations signing the Roerich Pact for protecting cultural property. The ceremony took place at the White House on April 15, 1935, under the gaze of President Franklin D Roosevelt.

American friends to the rescue

This first Roerich museum operated for more than ten years, but closed in 1935, when it changed ownership due to various factors, including the Great Depression.  The Nicholas Roerich Museum of today exists thanks to the efforts of American friends. Following his death in 1947, Bathazar Bolling, and later Katherine Campbell-Stibbe, a close friend of the Roerich family since the 1920s, purchased the building at 319 West 107th Street, where the museum opened in 1949 and is still located today. 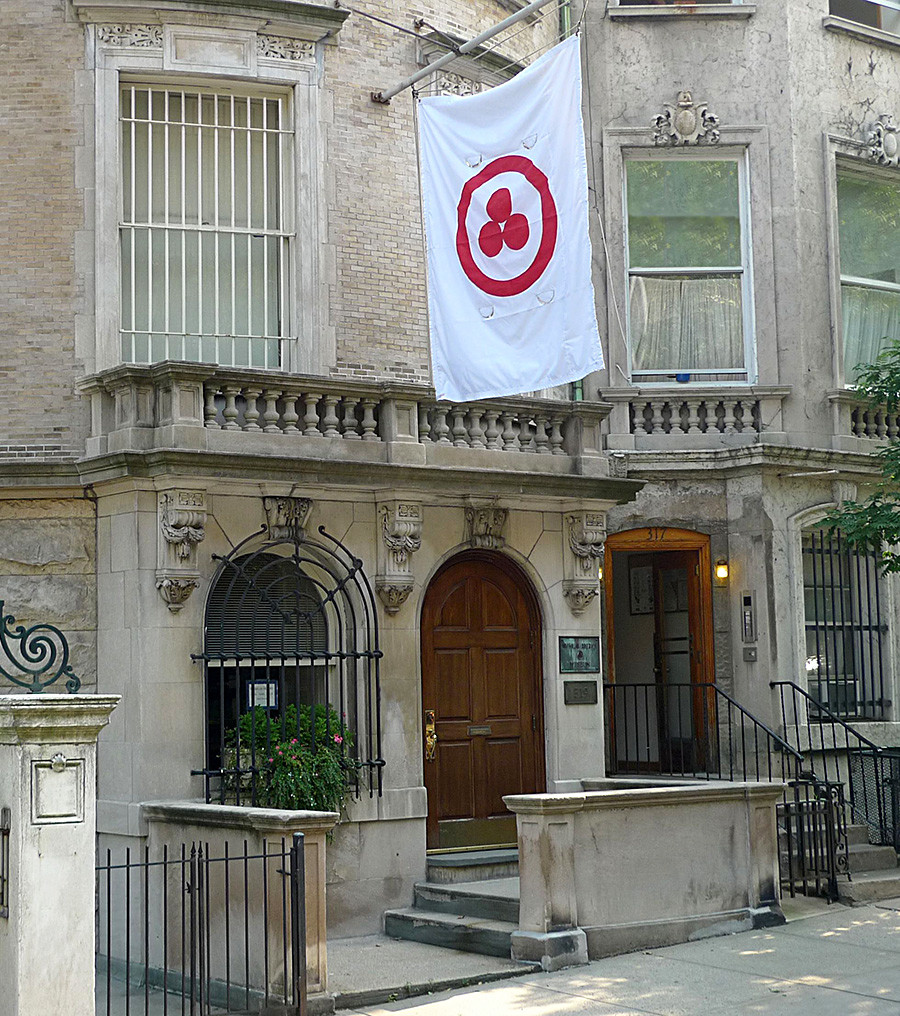 In those early decades, the annual budget rarely exceeded $10,000, and the museum survived on the sheer enthusiasm of its first two directors - Sina Fosdick and Daniel Entin. Katherine died in 1996 and bequeathed funds to set up a trust to finance the museum’s activities.

Experts estimate that, in his lifetime, Roerich made about 4,500 works, including numerous sketches and landscapes of various sizes. The museum has more than 200 works of art, and many are large canvases of the late 1910s and first half of the 1920s, which scholars consider to be Roerich’s most interesting and intense period. The museum also has six canvases that Roerich painted in the USA: three for each of his two artistic trips - to the American Southwest, and to Monhegan Island.

In 2008-2013, when prices for Roerich’s paintings peaked, the museum’s collection was valued at just under $100 million. (In June 2013, Roerich’s Madonna Laboris sold for 7.9 million Pounds Sterling - about $12 million at the time - at an auction in London; this was the highest price ever paid for one of his artworks.)

With today’s declining prices for Russian art, the museum’s collection is now worth about one-third of what it was a decade ago, said Trepsa. Still, security is a major concern for the small museum, which is housed in a 7,500 square foot (700 sq. m.), five-floor townhouse (3 floors of exhibition space). 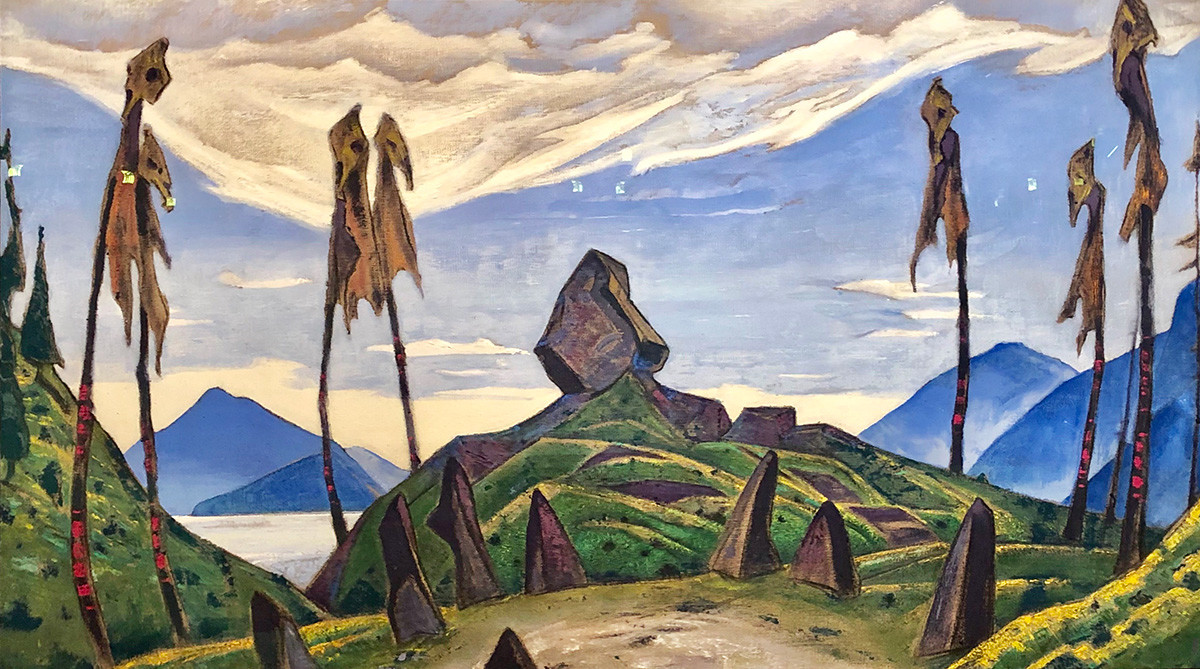 To protect all of its treasures, the museum has a state-of-the-art security system that covers the building perimeter, as well as individual paintings. It was installed in 2009, after two small paintings were stolen.

Ideas are more valuable than money

Dollar signs, however, don’t mean much for Roerich’s followers and the museum officials. This is because the notion of money is far from the essence and purpose of the artist’s life and work.

“Roerich looked at the world, mankind and history through the prism of all-spiritual pantheism, myth, religious tradition and epic tales,” says Dmitry Popov, the Roerich Museum’s collection manager. “His art is permeated with mysterious visions of the planet’s birth, tales of legendary continents and nations, feats of heroes of ancient history, monuments of bygone eras, images of prophets, saints and ascetics of the East and West.” 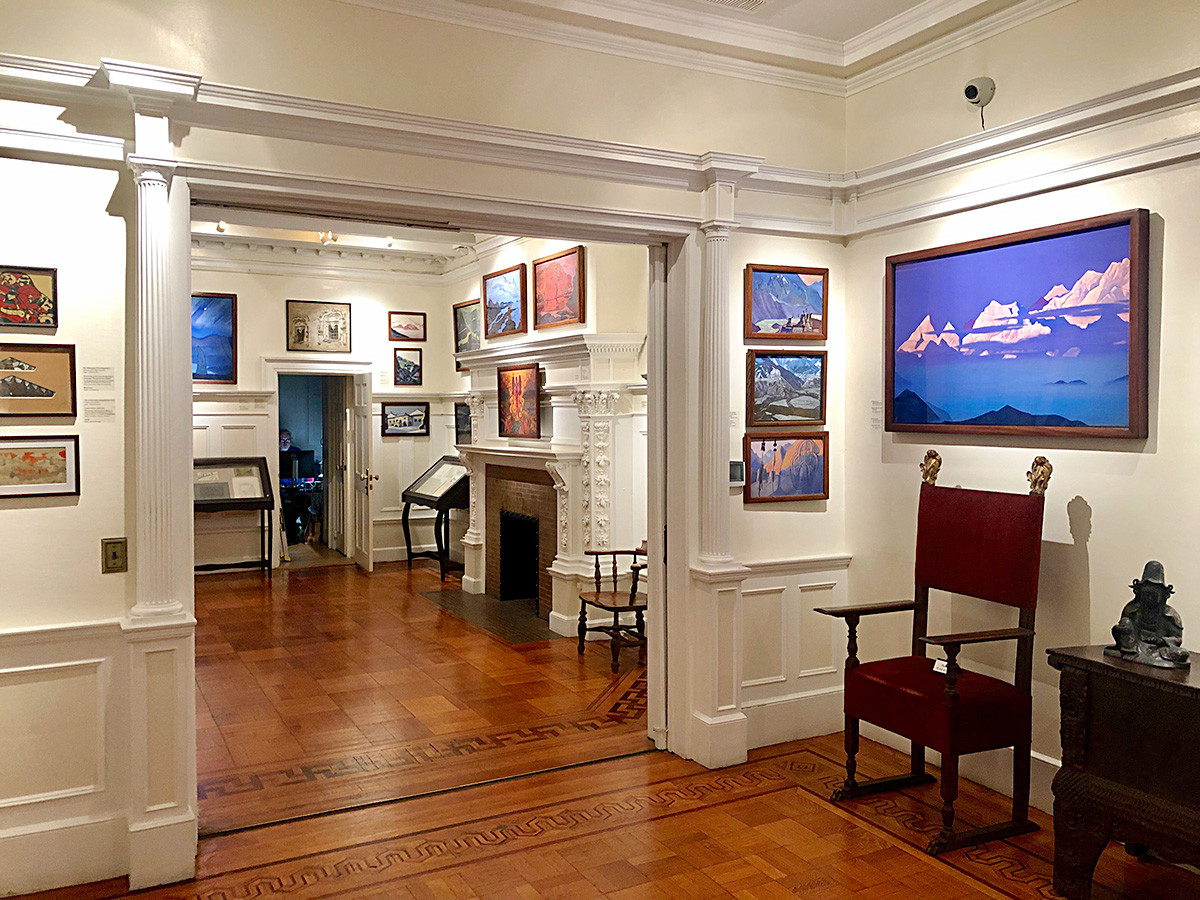 Interior of the museum

So why is Roerich missing from art history books? His artistic endeavors clearly put him outside the revolutionary and raucous artistic mainstream of the first half of the 20th century. Perhaps this is because he was more than just an artist: Roerich was a writer, poet, mystic, religious philosopher, archaeologist, explorer, teacher, museum administrator, journalist and head of a social movement. Scholars say he was perhaps the only European artist who successfully combined the imagery and style of West Europe, Russia, India, Central Asia and the Far East.

More than a Russian painter

Two of the museum’s most captivating paintings are Madonna Oriflamma (1932), and Mother of the World (1937). Both combine iconographic elements of East and West, from the figure of the Virgin Mary in the style of the Italian Renaissance to the star spirits represented by the Buddhas who are in meditation. In addition, Madonna Oriflamma features the international symbol of the Roerich Peace Pact: three orbs. 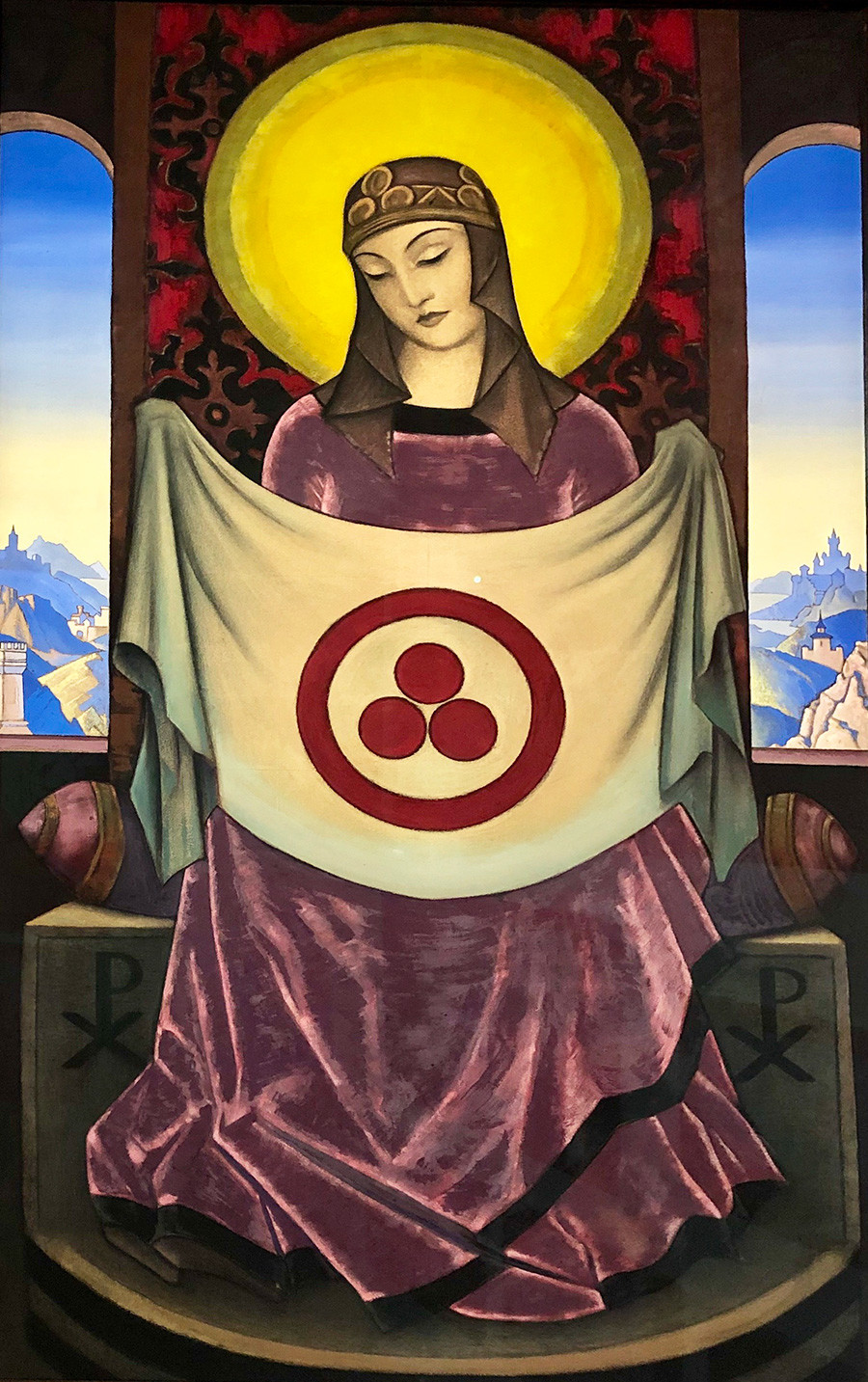 “I would not call Roerich a ‘Russian’ painter. While he was born in Russia, his life, art, and legacy characterize him as more of a cosmopolitan, and he certainly regarded himself as a citizen of the world,” says Trepsa.

The museum says it has about 6,000 visitors a year: one-third Americans, one-third Russian speakers, and one-third from the rest of the world. “Generally speaking, Americans do not know him at all,” says Trepsa. 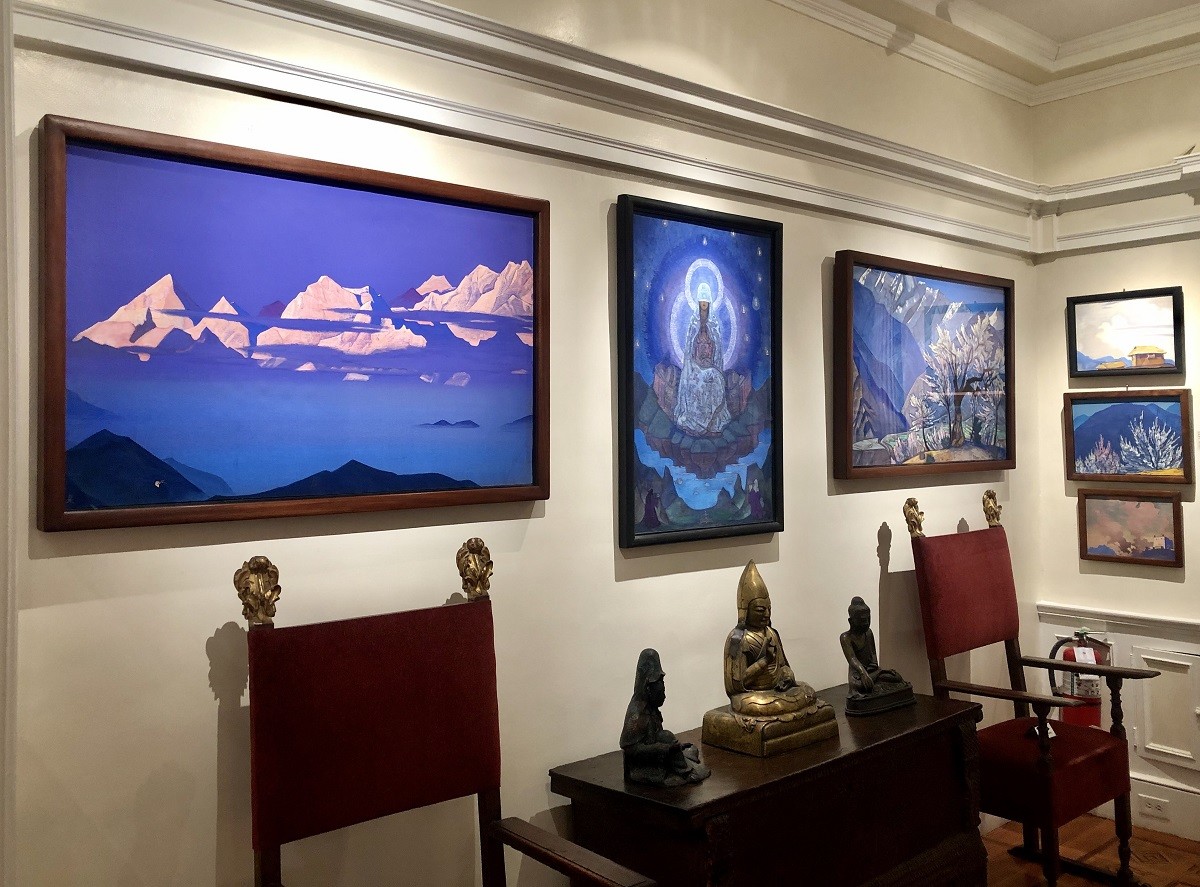 'Mother of the World' painting in the center

In order to diversify and better represent Roerich’s life and creativity, the museum is aiming to acquire works from the artist’s other periods. Finding funds is an issue, and a few years ago, the museum made the difficult decision to sell one painting.

“So far, we have sold only one painting from our collection, and the money went into a special account that is used exclusively for buying Roerich’s works,” said Trepsa. “This sale has allowed us to buy five other works by Roerich, and there is still money left in this account.” 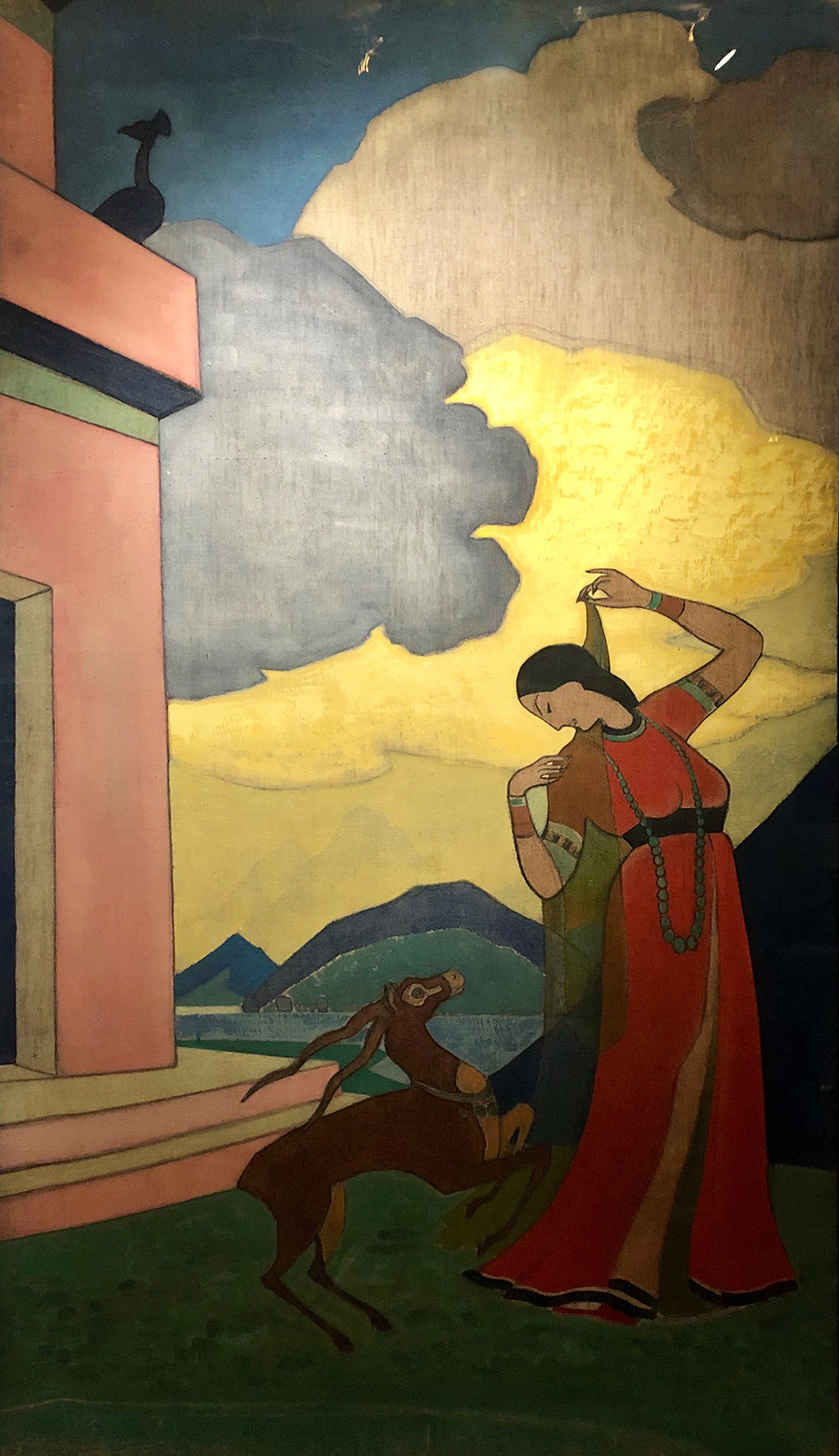 'Song of the Morning' by Nicholas Roerich

The museum’s main goals for the future are to keep it in New York City, “which financially is not easy”, to enhance and balance the collection; to improve and enrich the visitor’s experience, both in the museum and via the website; to fully digitize the vast archive and make it accessible online; and to raise awareness of Roerich’s art and his ideas.

While mankind in the 20th century was unable to realize Roerich’s goal of global peace and spiritual harmony, perhaps it will be realized in the 21st century. We have 80 years left to achieve this noble goal and make Roerich proud.