Ninilchik language: How a rare Russian dialect remains in Alaska 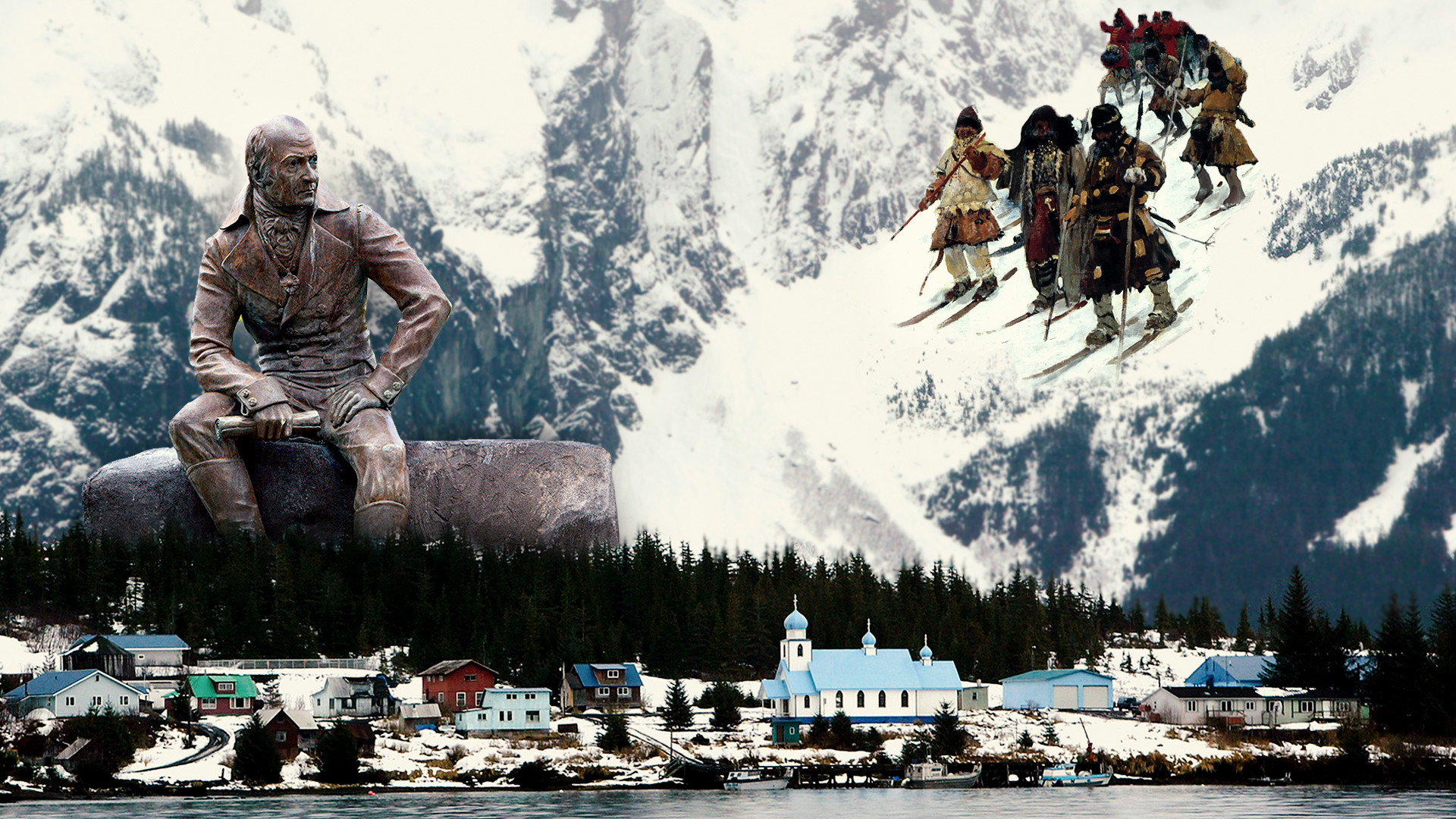 Legion Media; Getty Images
In a remote Alaskan village, a unique Russian dialect has survived into the present. How many linguistic connections does North America have with the Russian Federation?

In the middle of July 2020, American activists concerned with correcting historical racial injustices surfaced in the most unlikely of places: the Alaskan coast. Its target was the statue of 18th century Russian merchant and state official, Alexander Baranov, that is standing in Sitka, the town he founded in 1799. 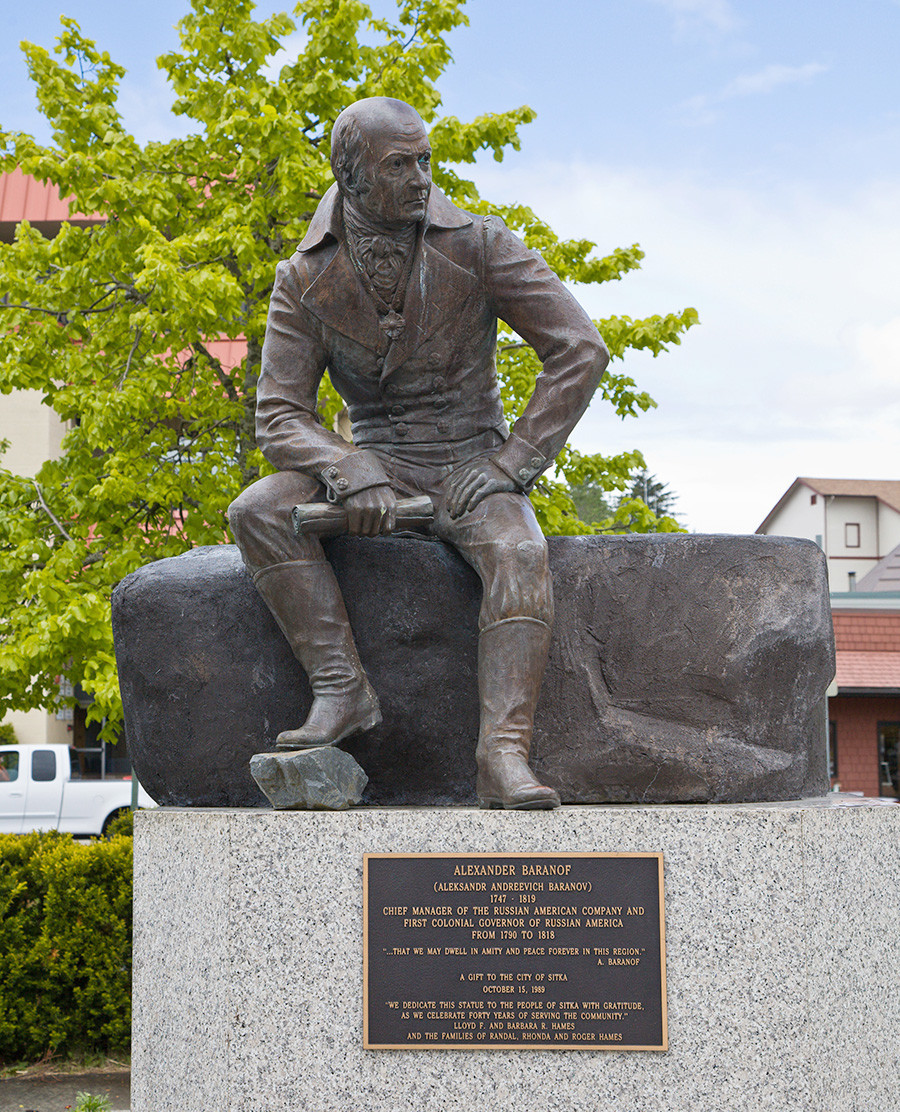 Baranov’s statue is the latest battlefield in a struggle over historical memory in the U.S. Numerous monuments, especially those dedicated to prominent state and military officials who had ties to slavery, have been torn down or threatened with removal as a sign of modern distaste for past injustices. Baranov’s relationship with local indigenous populations, in particular the Tlingit nation, was occasionally tinged with violence.

The statue will be relocated to a local museum, a testament to the complicated history of a region that was purchased from Imperial Russia by the U.S. in 1867 – a fact that many Americans continue to be unaware of. [Read more about Baranov and the statue’s relocation here].

There’s another, perhaps even more compelling, relic of the Russian settlements in Alaska, one that established a very strong bond between European Russia and local peoples such as the Tlingit: the dialect known as Ninilchik Russian.

The Russian-Alaskan village that kept its language...or so it seemed

Ninilchik Russian is named after a village of the same name, located approximately 300km south of Anchorage, on a small peninsula near the state capital. Along with the town of Kodiak, it is one of the only Russian-speaking communities left in this former province of the Russian Empire. 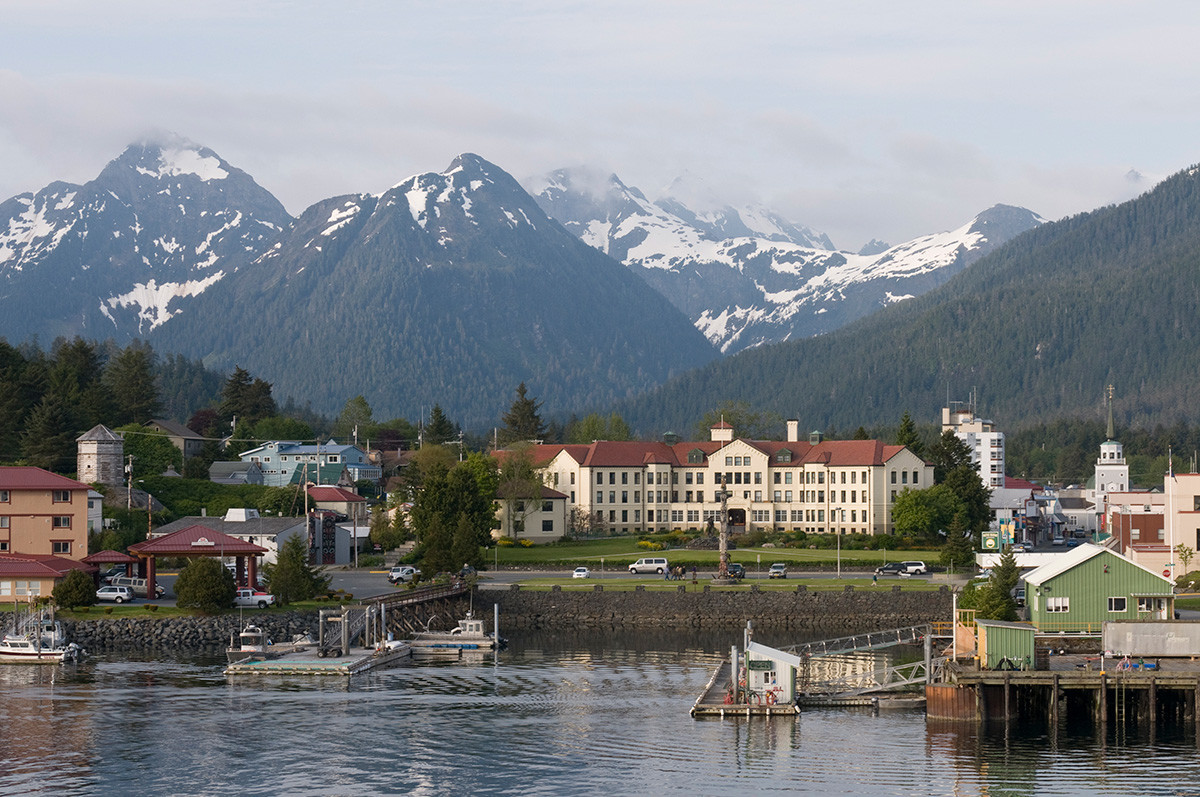 Rather than being ruled by the Imperial government, the Alaskan colony was administered by an entity known as the Russian-American Company, much like British India was ruled by the East India Company. Merchants such as Baranov, rather than governors, worked as state-authorized administrators.

The village’s three main families - the Kvasnikovs, the Rastorguevs and the Oskolovs - formed a kind of dynasty that survives until this day, and they’ve preserved the Russian language along with it. But the version of Russian that they continue to use is distinct from the Standard Russian dialect used in Eurasia and among the Russian diaspora, one that has often been looked down upon as an ‘inferior’ version of the language. It is being studied today in hopes of slowing its total disappearance.

“Ninilchik Russian is associated in the minds of its speakers with peasant culture and a subsistence lifestyle,” says the linguist Conor Daly, who has conducted research on the dialect. This ‘peasantness’ is often connected to the language’s simplification – it has lost many of the complex structures of standard Russian, including trademark grammatical features such as gender.

Daly says that this can happen with languages that survive in an independent ‘bubble’ within a culture that seeks to repress it. Once Alaska passed into American hands, school teachers and officials mandated the use of English in public schools, leaving Ninilchik’s Russian population the option to speak their native language at home and/or among themselves. Some even forgot how to write the language, rendering them functionally illiterate in Russian. 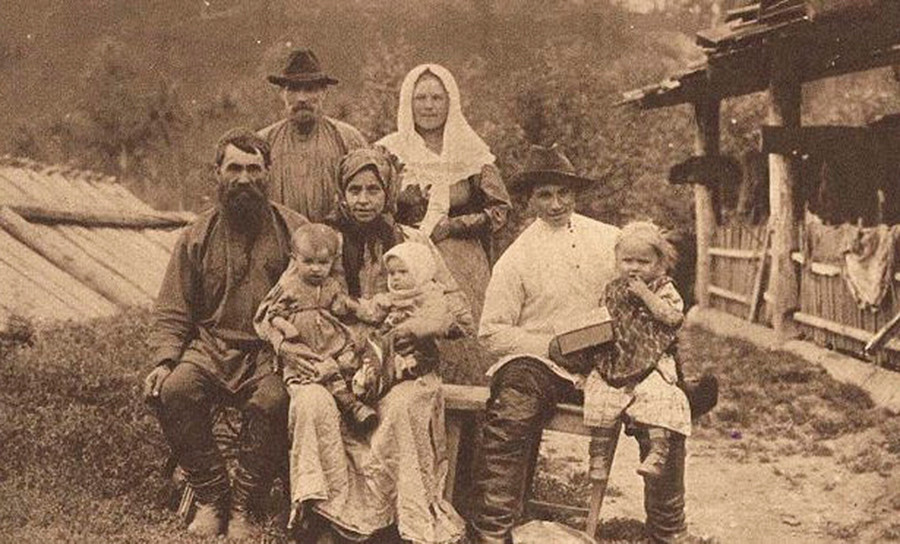 One of the first Russian emigrants to the U.S.

The village’s dialect had to compete with standard Russian in the face of two immigration waves: Old Believers who fled to the American West Coast after the 1917 October Revolution and moved to Alaska in order not to dilute their culture among the ‘worldly’ Americans in Oregon and Washington state, and Russians who left after the collapse of the Soviet Union in 1991 and today live near the cities of Anchorage and Fairbanks.

While the dialect is often seen as a quirk, a linguistic exception in a foreign land, the connection between languages found in Russia and North America might be more complex than meets the eye.

The Dené language group, which includes both the Tlingit and Athabaskan languages spoken in Alaska, has also been the subject of proposed links to the lands of the former Russian Empire – in this case, with the inner reaches of Siberia.

In 2008, linguist Edward Vajda proposed a link between the Dené tongues and those spoken in the Yenisei region in northern Siberia. This followed up on the hypotheses made near the start of the 20th century and gave them a name: the Dené-Yeniseian group. According to Vajda, it’s possible that ancestors of both peoples may have been Siberians, which coincides with the thesis that North Asians crossed into North America over the Bering Strait and broke off into a number of the tribes and nations we know today. 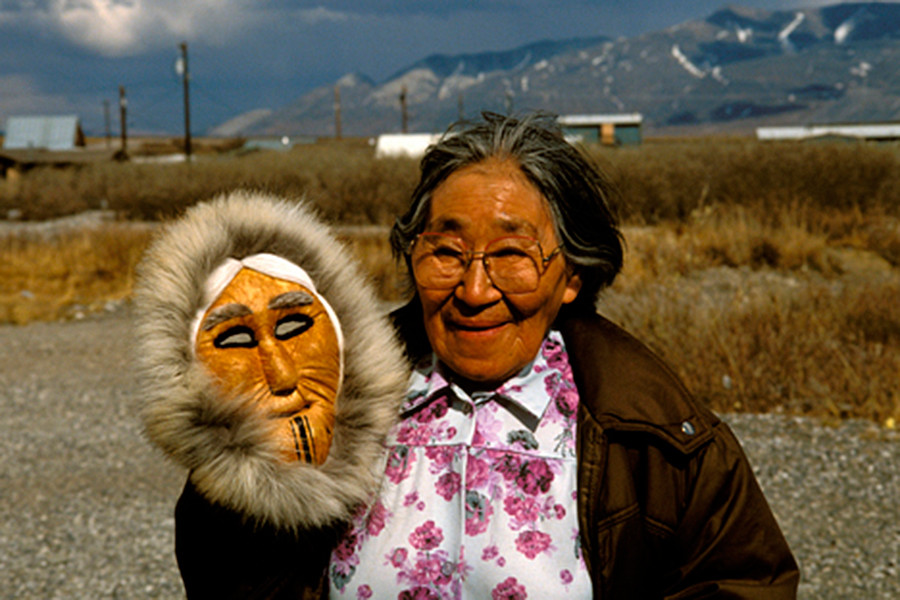 A local woman with a traditional mask in Eskimo village, Alaska

And this isn’t the only hypothesis liking North America and Siberia. The Eskimo-Aleut language group, the most famous speakers of which are Canada’s Inuit people (as well as the Greenlanders), also has links with Siberia in the form of Yupik, an endangered language spoken in Russia’s remote Chukotka Autonomous Okrug. In this case, the Siberian language group, nearly extinct in its homeland, found new wings in the expanses of the North American arctic.

While the above two theses have been received with cautious enthusiasm in the linguistic community, there are others that have been considered significantly more outlandish. One of the flashier examples is the proposal for a Uralo-Siberian language group, which ties together the Inuit and Aleut languages with Russia’s Uralic languages, a group that includes Finnish and even Hungarian. Theories proposing linguistic super-families like this, however, are often greeted with academic suspicion. 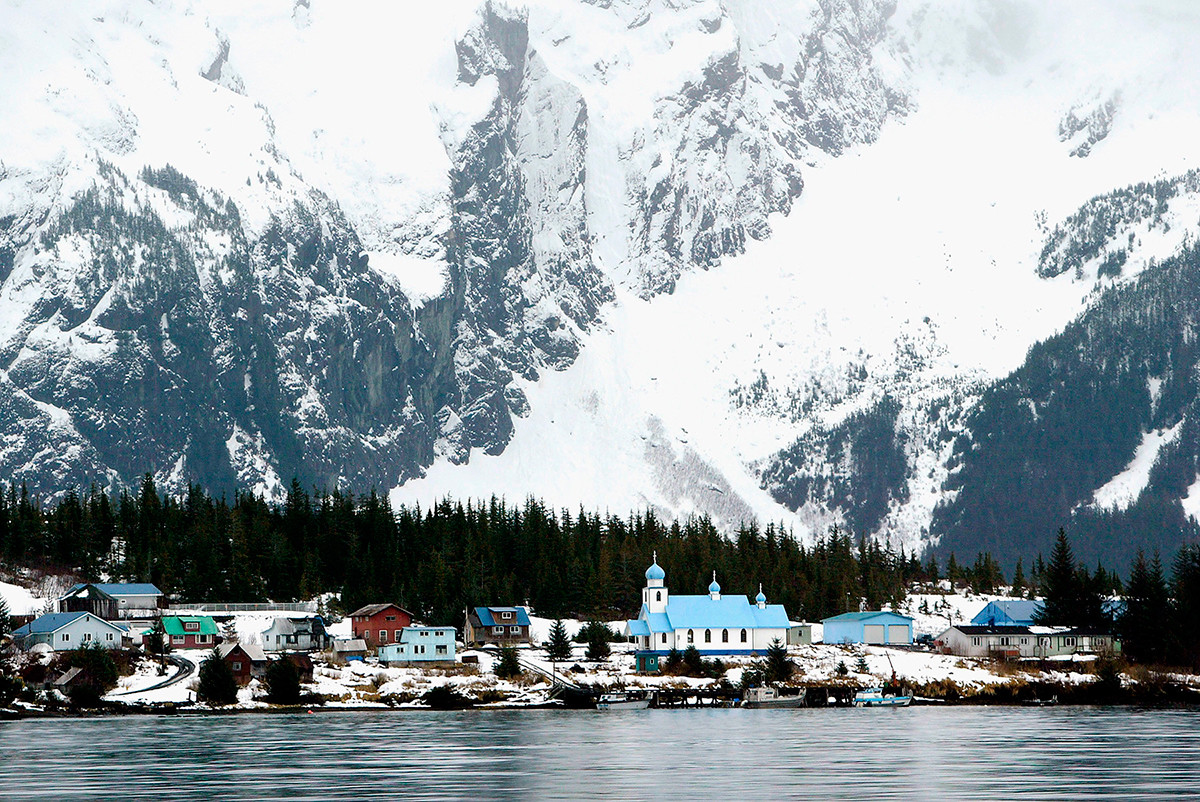 What these do imply, however, are migrations of both Siberian and Russian languages over the northern reaches of the Pacific Ocean, with their spoken descendents living side by side and spoken by the Ninilchik Russians and the neighbouring Tlignit and Aleut peoples. Globalization, it seems, is not merely a modern phenomenon.

There are few speakers of Ninilchik Russian left today in the village, a consequence of cultural practices that prized English over older linguistics traditions. A researcher couple from Moscow, Mira Bergelson and Andrei Kibrik, visited the village in the 1990’s in order to work towards its preservation.

“They’d gone to the English-speaking school,” Bergelson said in an interview published in 2013, “which opened up in the 1930s to replace the Russian Orthodox Parish School that closed down in 1917.”

The Kvasnikov and Oskolkov descendents still live on, however, and have cooperated with linguists who have copied numerous terms and taken recordings that document pronunciations and accents that would sound strange to the contemporary Russian ear. Some of these can be found on their Ninilchik Russian database online.

The community still practices resilience today. Their Russian Orthodox church building was rebuilt in the mid-20th century after a fire, and more fires from the nearby Caribou Hills threatened many village buildings in 2007.

One has to be resilient to live in a land like Alaska, and that may perhaps explain the rich diversity of linguistic traditions in the region. With help from linguists and researchers from across North America and Eurasia, Ninilchik Russian, perhaps one of the only remaining examples of an Imperial-era Russian dialect surviving into the 21st century, may last for many more years to the delight of locals and language-lovers alike.