Most famous 'Russian' places in the U.S. 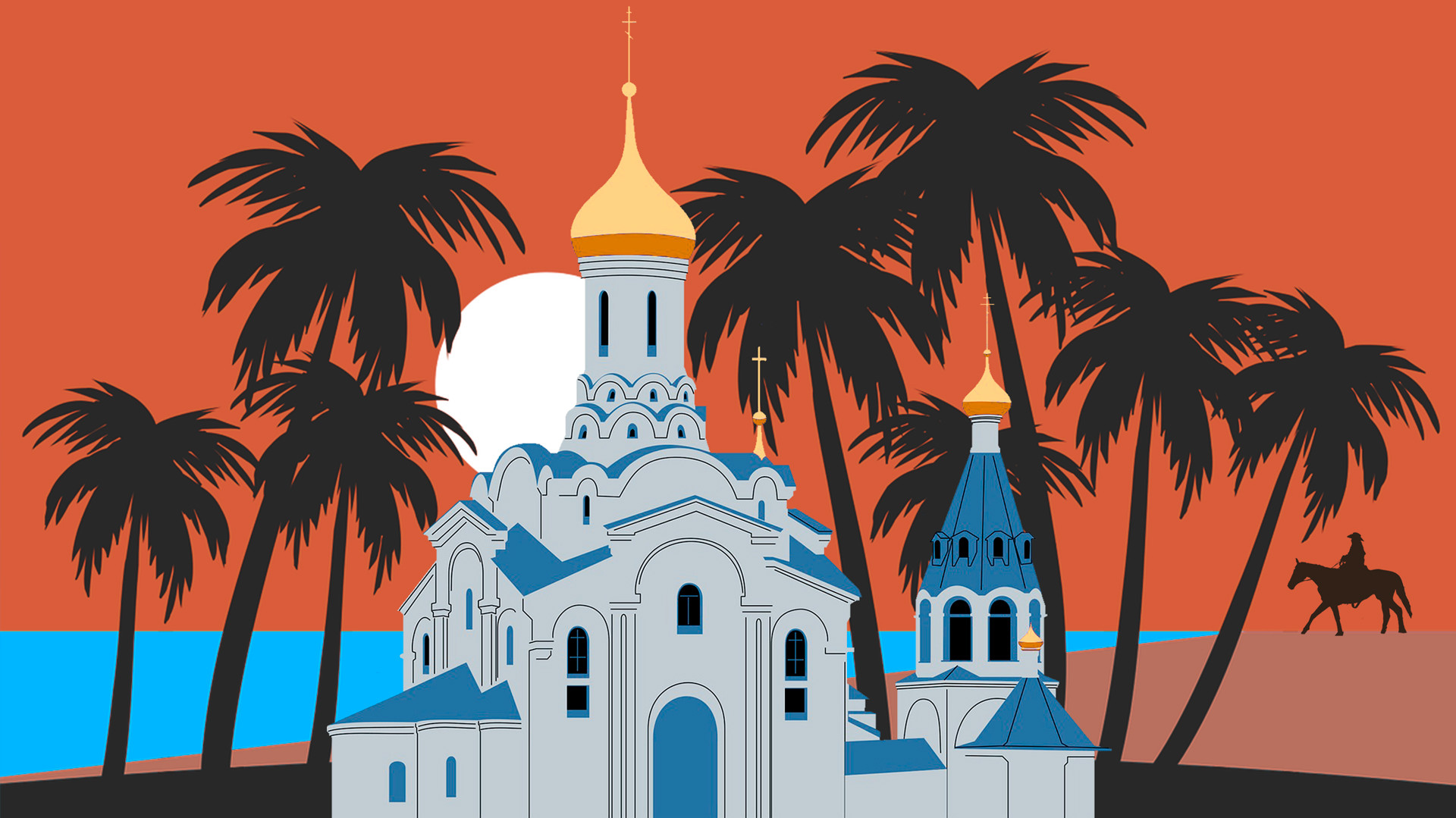 Victoria Borodinova/Pixabay
While Russia and the United States border each other in the North Pacific, the two countries often seem to be very far apart. Nevertheless, the U.S. has many towns and cities that still bear traces of Russian influence.

Most Russian places in the U.S. are tied to the activities and legacy of the Russian-American Company, which was founded at the end of the 18th century by businessmen Grigory Shelikhov and Nikolai Rezanov, and which had support at the highest level (Tsar Alexander I was among its shareholders). The company founders were particularly interested in Alaska, which had been discovered by Russian explorers. Even before the Russian-American Company was established they had carried out over 100 expeditions to the peninsula, bringing back furs and other goods. Russian sailors also explored other parts of North America, where they set up a number of permanent settlements, which they called Russian-America. Their business, however, was not particularly successful because it was difficult to compete with British and local entrepreneurs. The sale of Alaska in 1867 was the final blow to their ambitions in the New World. The Russian-American Company only officially shuttered in 1881, but a distinctive Russian legacy has remained until this day in the northwestern United States.

1. Alaska: the most Russian of American states 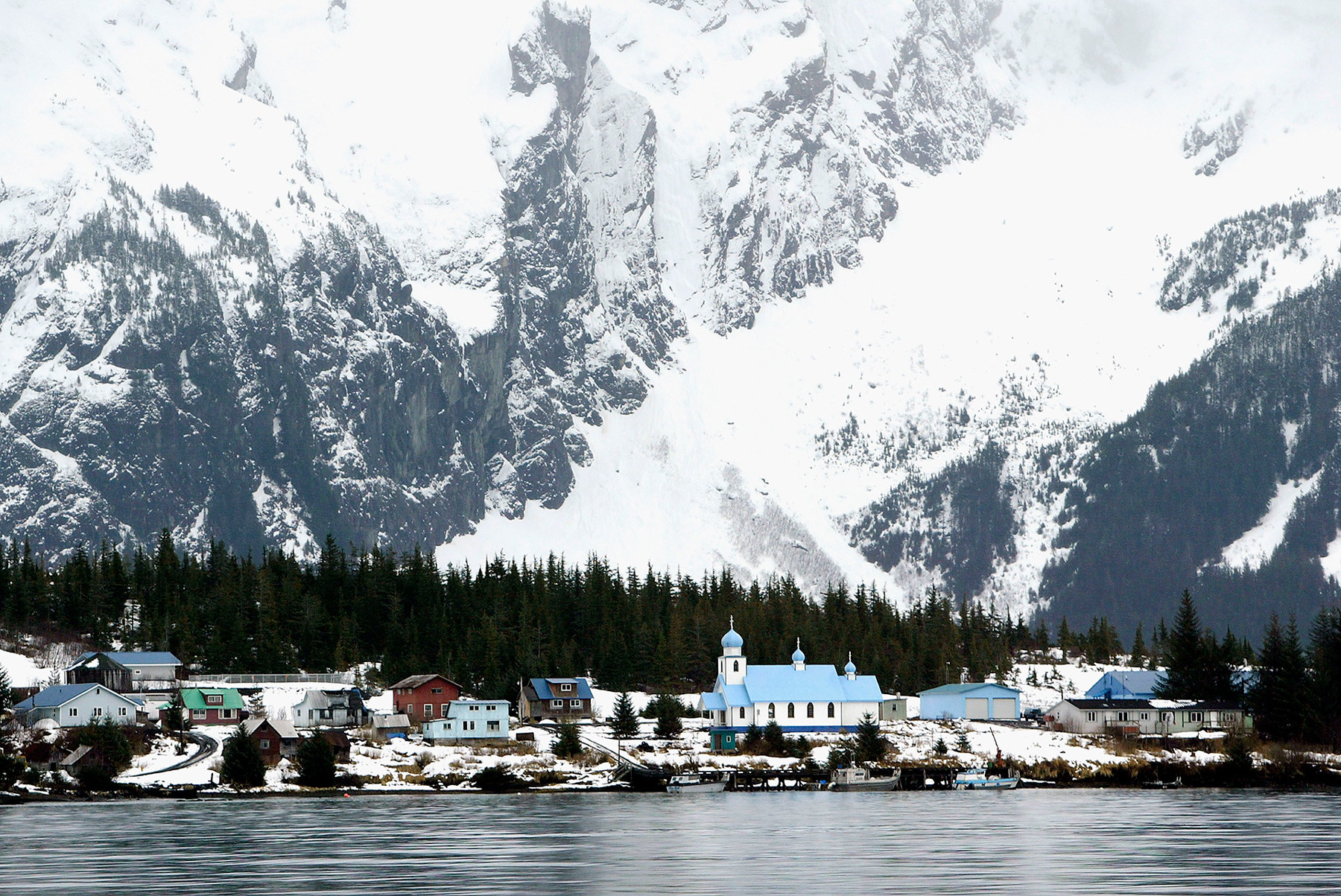 Despite the fact that Russia owned this land for less than a century, there are Russian roots at nearly every step. The Alaskan Cathedral of Saint Michael still stands in Sitka (Novo-Arkhangelsk), which was the capital of Russian-America.

In Dillingham (Novo- Alexandrovski Redoubt), there is the Church of St. Seraphim of Sarov. The relics of America's first Russian Orthodox saint, Saint Herman of Alaska, rest in Kodiak (former Pavlovsk). The local seminary is named after him. 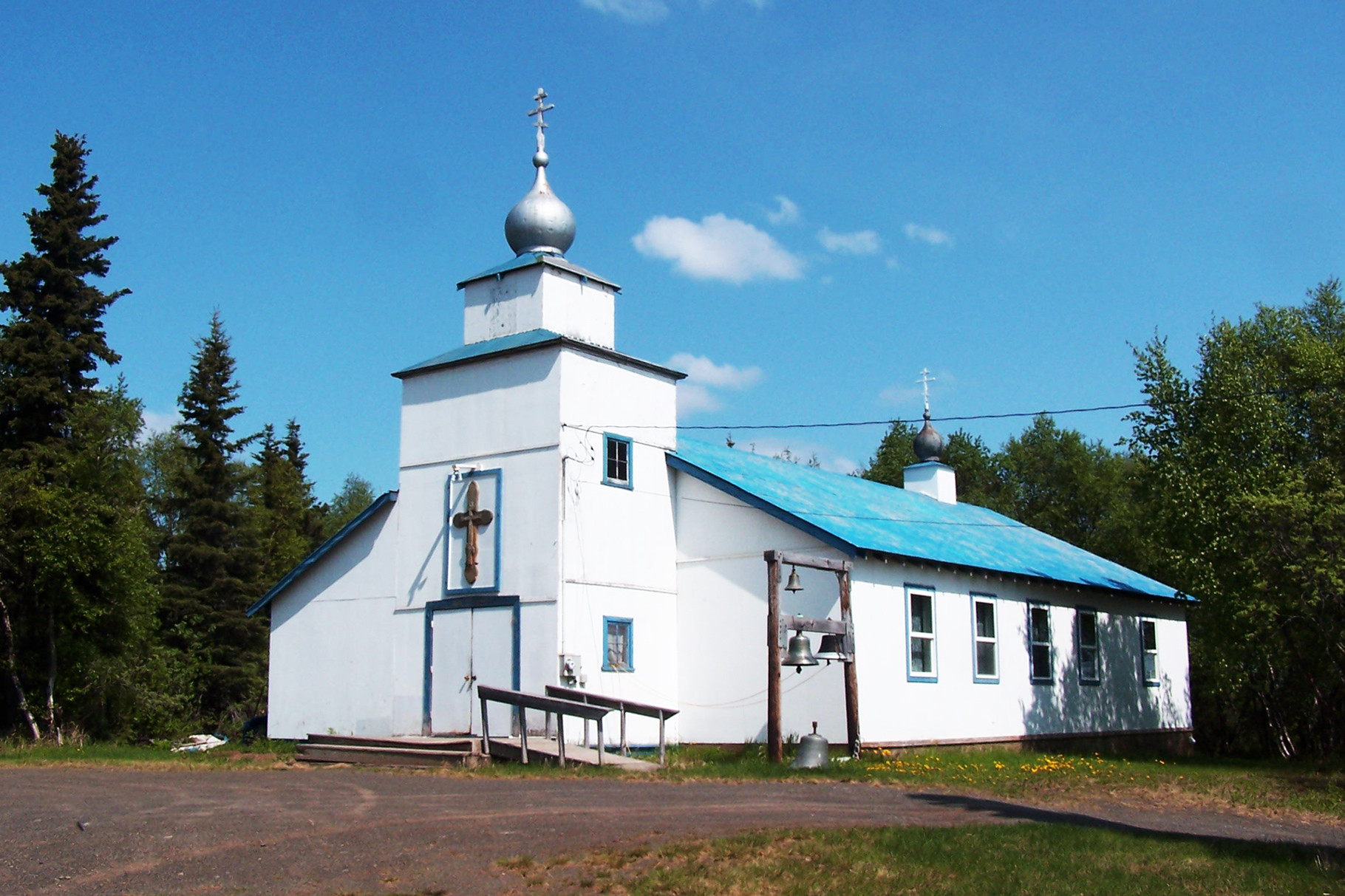 Perhaps the largest concentration of remaining Russian settlements is on the Kenai Peninsula: These include the city of Kenai (Nikolaevsk), Kasilof (St. George's Redoubt), Seldovia (Aleksandrovsk), and the village of Ninilchik, where in 2013 linguists discovered a unique dialect of the Russian language.

Some of its elderly residents spoke a mixture of Old Russian and English. The explanation for this phenomenon was quite simple: Russian settlers often married local women and their children went to Russian schools. The rather secluded location of the settlement made it possible to preserve this local language untainted for two centuries.

There are also many Russian places on the banks of the Yukon River, one of which is called Russian Mission. With a population of about 300, most are indigenous people with Russian names and who are Russian Orthodox believers.

The map of Alaska has many other place names dating back to the region's Russian period. There are the islands Bolshoi, Baranof, Kiska, Krutoi, Olga, Pustoi; as well as Monashka Bay, Chaika Mountain, Sabaka Lake and Samovar Hills.

Just over 200 years ago this lush archipelago in the middle of the Pacific almost became part of the Russian Empire and could possibly be called today, say, the Hawaiian Autonomous Region of the Russian Federation. In 1804, explorers Ivan Krusenstern and Yuri Lisyansky were the first Russians to reach these islands, but they learned that the Americans were already busy trading with the natives. They left and returned to St. Petersburg, but one of the uninhabited Hawaiian islands today is named in Captain Lisyansky’s honor. 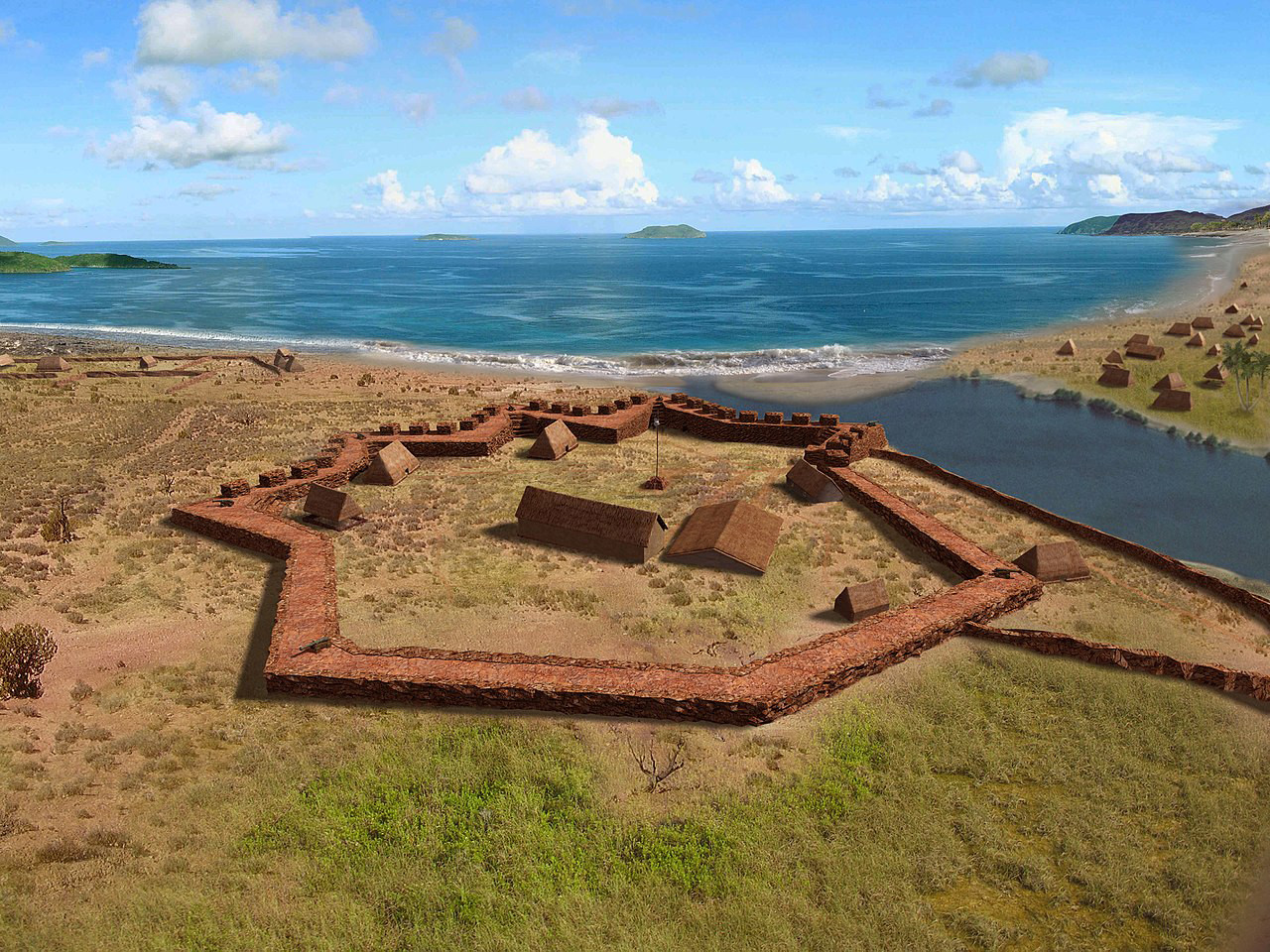 In 1816, the Russian-American Company sent Dr. Anton Schafer to Hawaii. When he arrived it turned out that two rulers were competing for total control of the archipelago: King Kamehameha I and King Kaumualiʻi. Both tried to develop relations with the Russians, and the former promised a lucrative trade, including the sale of valuable sandalwood. King Kaumualiʻi even discussed the possibility of transferring his territories to the jurisdiction of the Russian emperor, provided that the Russians would help him to defeat King Kamehameha I. Schafer agreed to help Kaumualiʻi and he built three forts (Elizabeth, Alexander and Barclay) on the island of Kauai.

Emperor Alexander I, however, did not see much point in developing new colonies at the other end of the world, and so he never ratified the treaty that called for the Hawaiian Islands to be absorbed by the Russian Empire. The ruins of the largest fort can still be found on Kauai, and are the centerpiece of the state park officially known as Russian Fort Elizabeth. Only parts of the foundation of Fort Alexander can still be seen, if you know where to look, while Fort Barclay has been entirely destroyed.

While Alaska was rich in furs, (gold mining only began when the Americans took control), its harsh climate made it difficult to grow food. Faced with the task of providing settlers with grain, Rezanov decided to establish an agricultural colony somewhere in the south and set off for Spanish California. 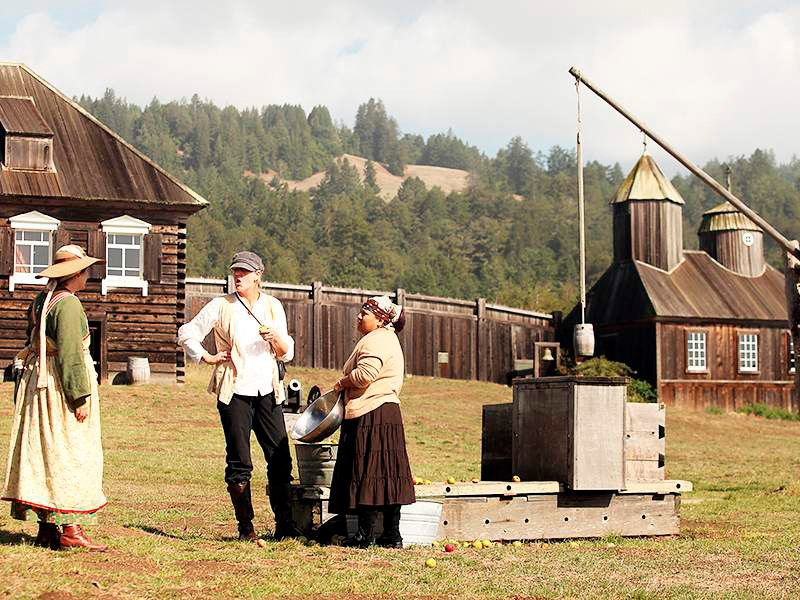 The former Russian colony, Fort Ross, located in California, became one of the American national parks attracting a lot of tourists.

The local authorities, however, were in no hurry to sell him land, but then romance interfered with politics. The story goes that the 43-year-old Rezanov fell in love with Conchita Arguello, the 16-year-old daughter of the commandant of San Francisco. The feelings were mutual, and he set sail to Russia to ask the emperor's permission to marry, but he died on the way. The heart-broken Conchita decided never to marry, choosing instead to become a nun. Although some historians believe that Rezanov pursued solely commercial interests, in the end the Spanish authorities allowed the Russians to establish a colony in California. 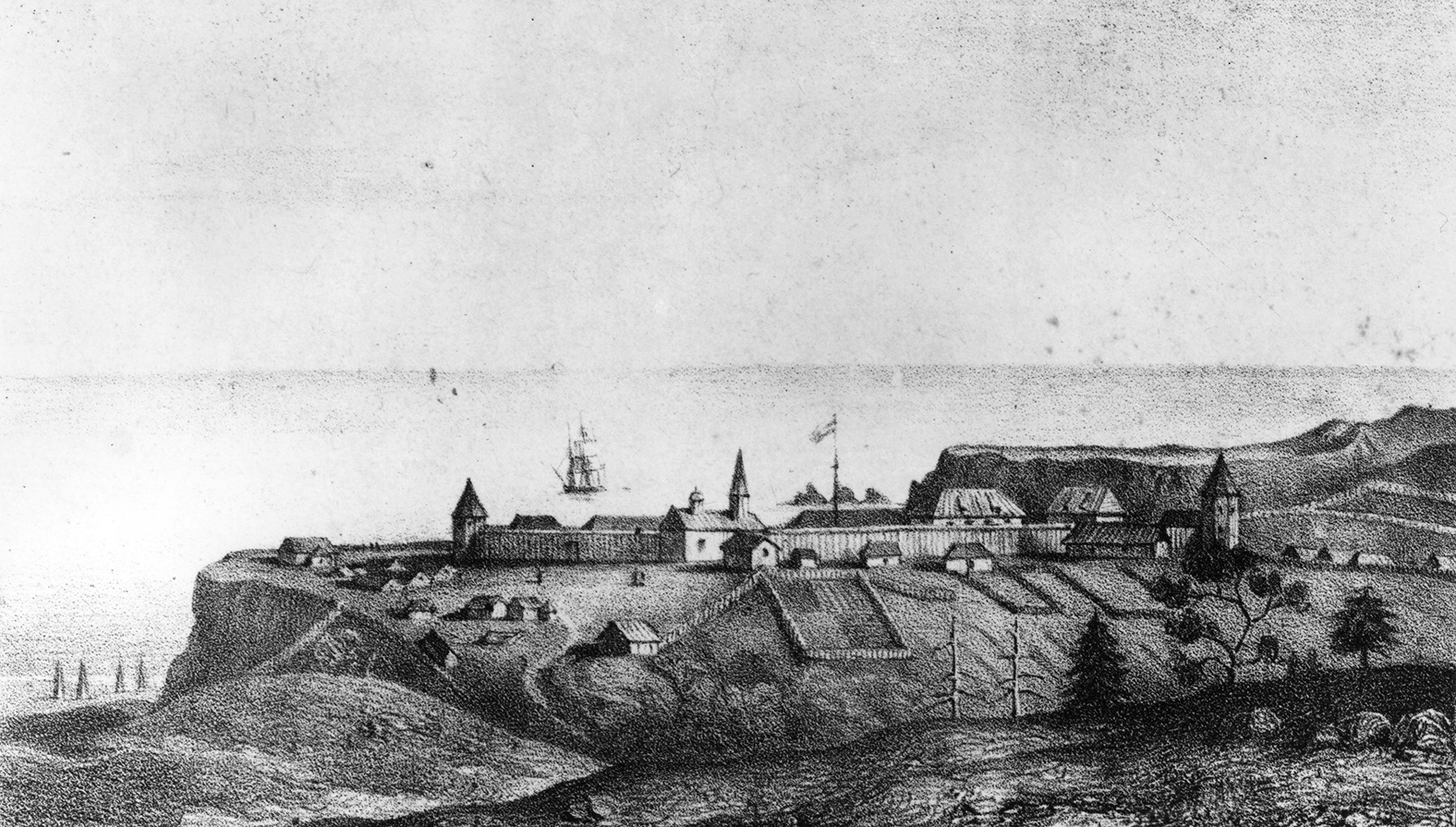 1828: Fort Ross on Bodega Bay, California, founded by Ivan Kuskoff as a post for the Russian-American Company. In 1841 the Russians withdrew, selling the fort to General John A Sutter.

In 1812, Fort Ross was founded about 100 km north of what is today San Francisco. According to one version, the Russians bought the land from the natives by giving them three pairs of pants, three blankets, two axes, three hoes and a string of beads. The first inhabitants of Fort Ross were 90 Aleuts and 25 Russians from Alaska, led by the Vologda tradesman, Ivan Kuskov. Nearly 30 years later, the cost of maintaining Fort Ross was too much, and so it was sold to the American businessman, John Sutter. These days, the fortress is a popular tourist attraction in the State of California, and every year on the last Saturday in July Russian cultural heritage day is celebrated at Fort Ross, transporting guests back almost 200 years. 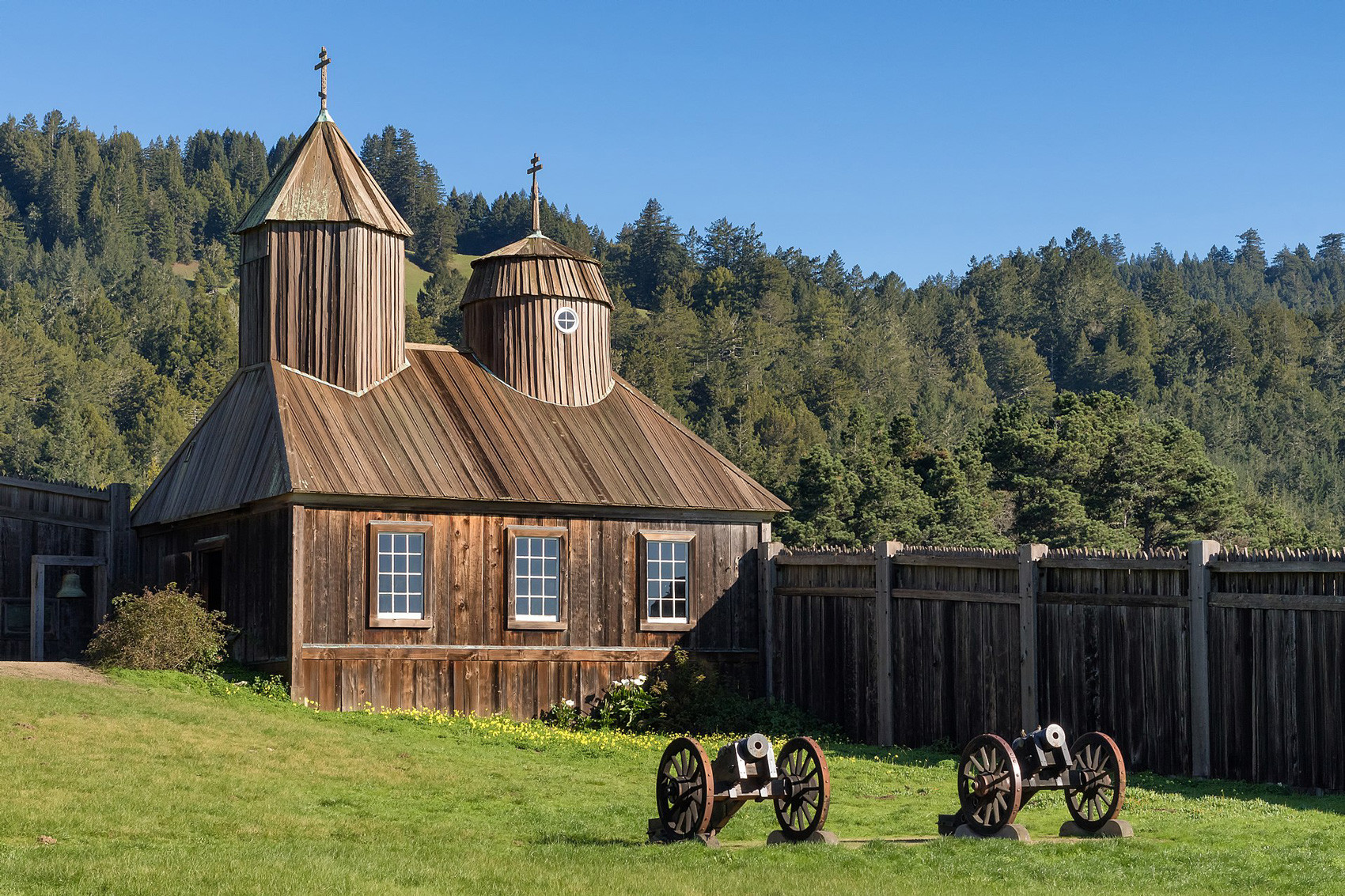 One of the central districts in the city is called Russian Hill because in the mid-19th century there was a cemetery here where Russian sailors were buried. That was when the first Russian Orthodox church and the first settlers appeared. 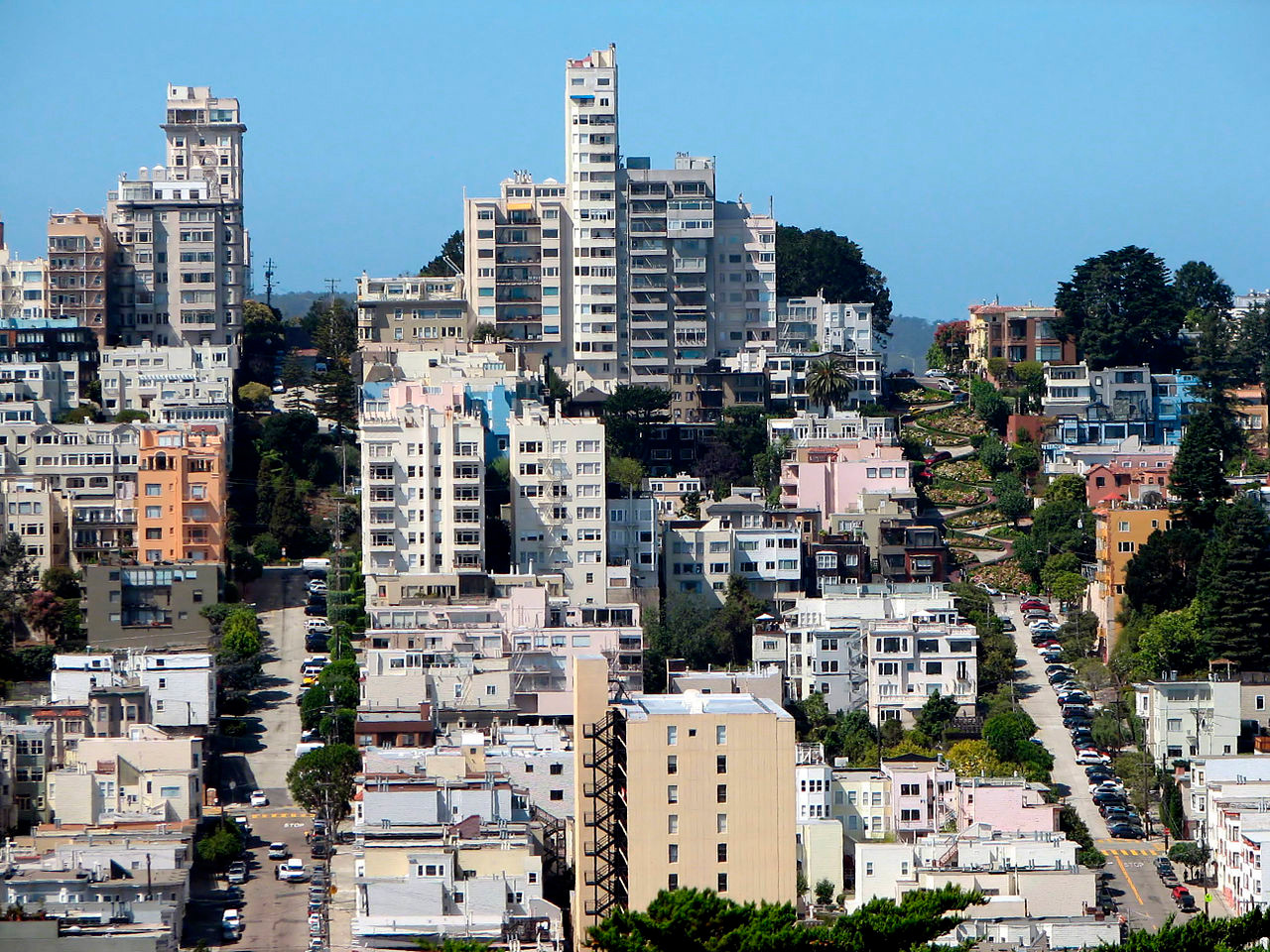 In the early 20th century, San Francisco became home to Molokans, a Christian sect that rejected the dogmas of the Russian Orthodox Church, such as veneration of saints and icons. Their life in San Francisco was described in detail by Ilf and Petrov in their book, Little Golden America. After World War II, many Russians moved to San Francisco from Harbin and Shanghai. 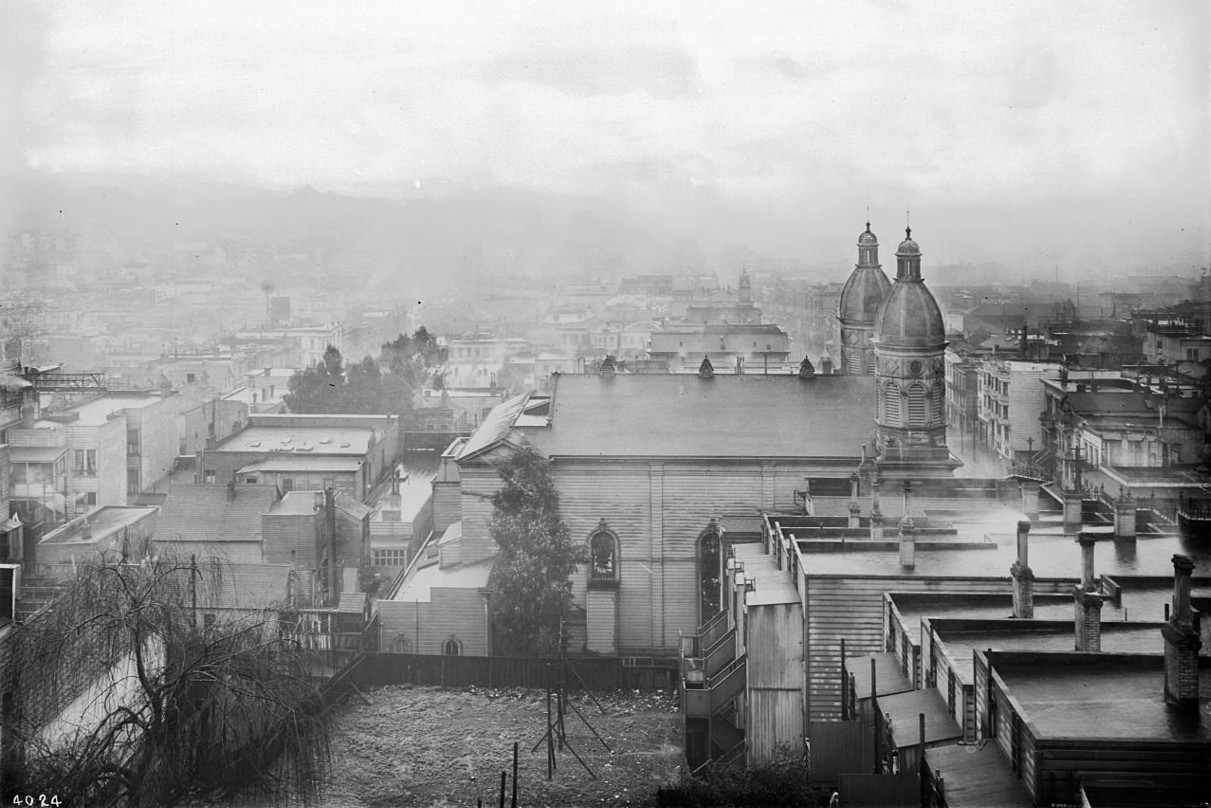 General view of San Francisco in the evening from Russian Hill, ca.1905.

In the 1990s the city became a popular destination for people from the former Soviet Union. Today, many Russians live in the Richmond area, so if you're looking for Russian cuisine you now know where to go.

This part of New York City has become the stuff of legends, as well as the backdrop to numerous films. While many people consider it to be a Russian district, in fact, it is home to people from all the republics of the former Soviet Union. 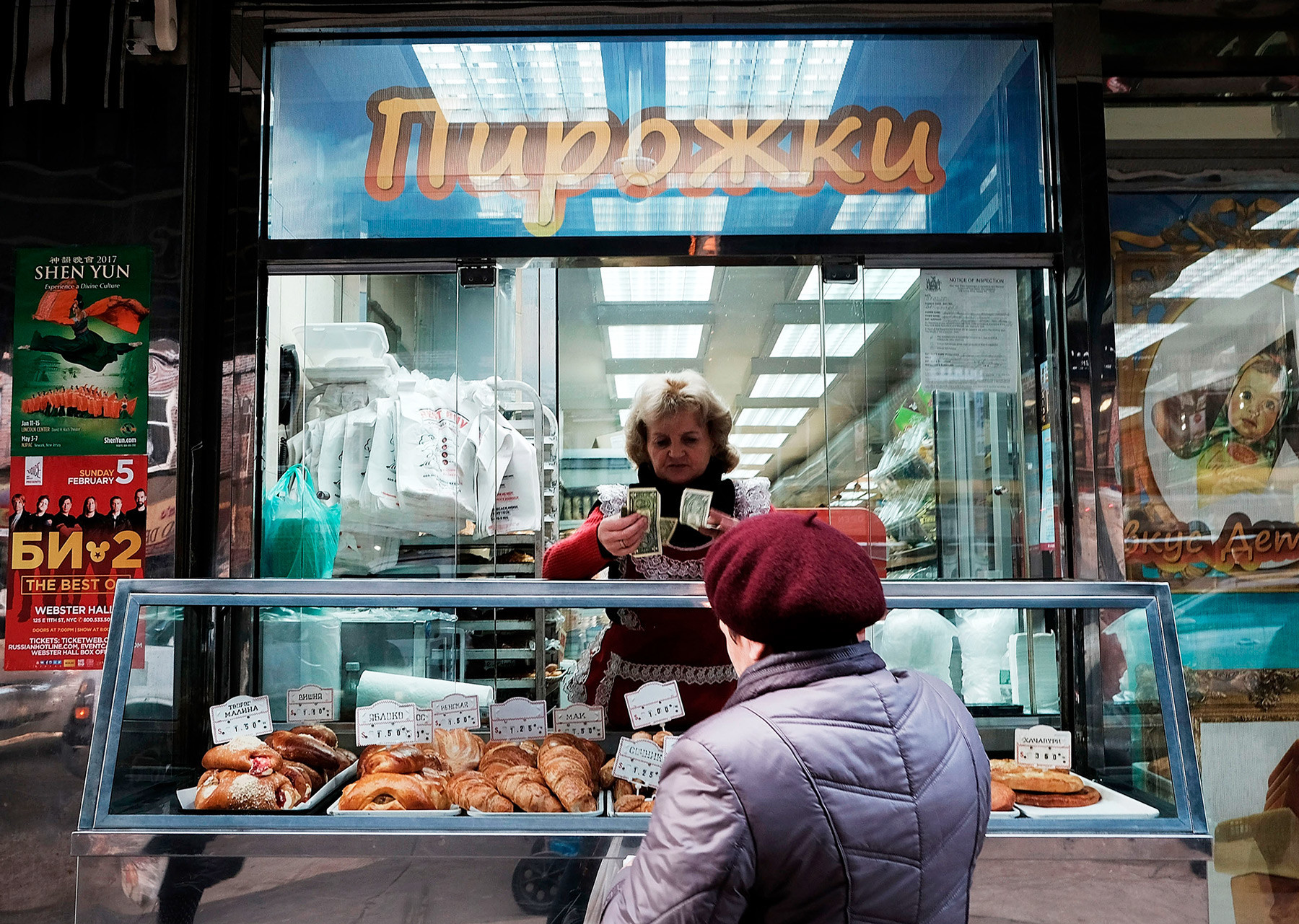 The first to settle here were Soviet Jews, who had been allowed to leave the USSR in the 1970s. They were followed by Russians, Ukrainians, Georgians, and Armenians, all coming in search of a better life. As a result, this part of New York has turned into something of a mini USSR. There are Russian shops and restaurants everywhere, and kiosks selling Russian papers and books. The locals speak a mixture of Russian and English, a dialect called Runglish, which has long been a source of jokes for local comedians.

There are more than three million Russian-speaking immigrants living in the U.S., and many large cities have Russian communities and locations. In Seattle, Los Angeles, San Diego, Denver, Detroit, Washington, Milwaukee and more, there are shops, cafes, and Russian-language media. The U.S. also has many cities with Russian names: For example, there are 17 settlements called Moscow! Some of their origin stories are quite funny. 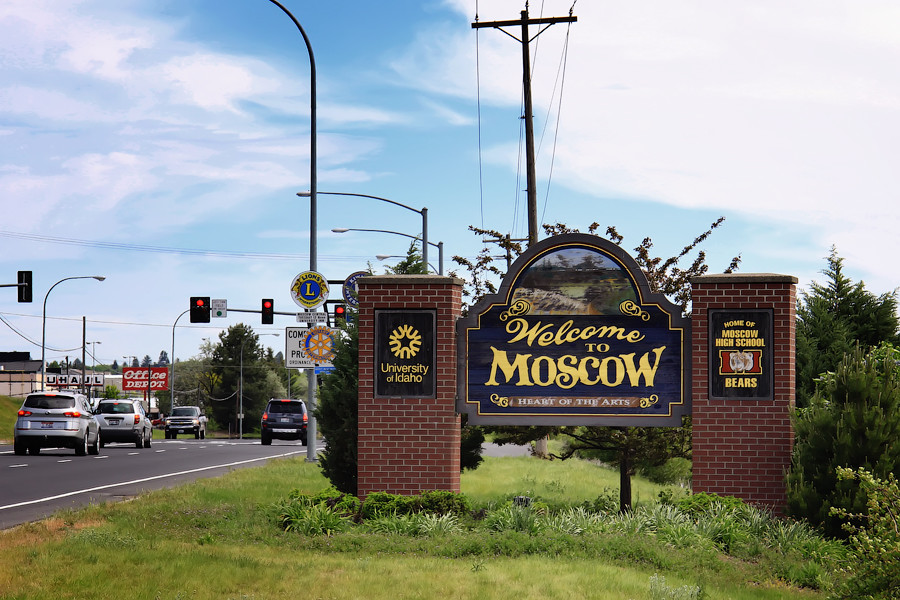 Do you know how the town of Moscow appeared in Idaho? When a post office was opened at that location the mayor changed the place's name from Hog Haven to Moscow because he had been born in Moscow, Pennsylvania. In addition, he had lived in Moscow, Iowa. 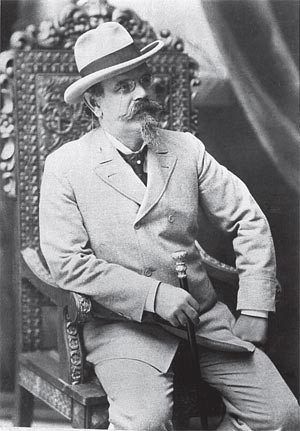 There is St. Petersburg in Florida, and which was founded by a businessman from Detroit, John Williams, and a Russian immigrant, Peter Demens, born Pyotr Dementyev. Legend has it that when choosing the name for the city, they tossed a coin and Dementyev won. 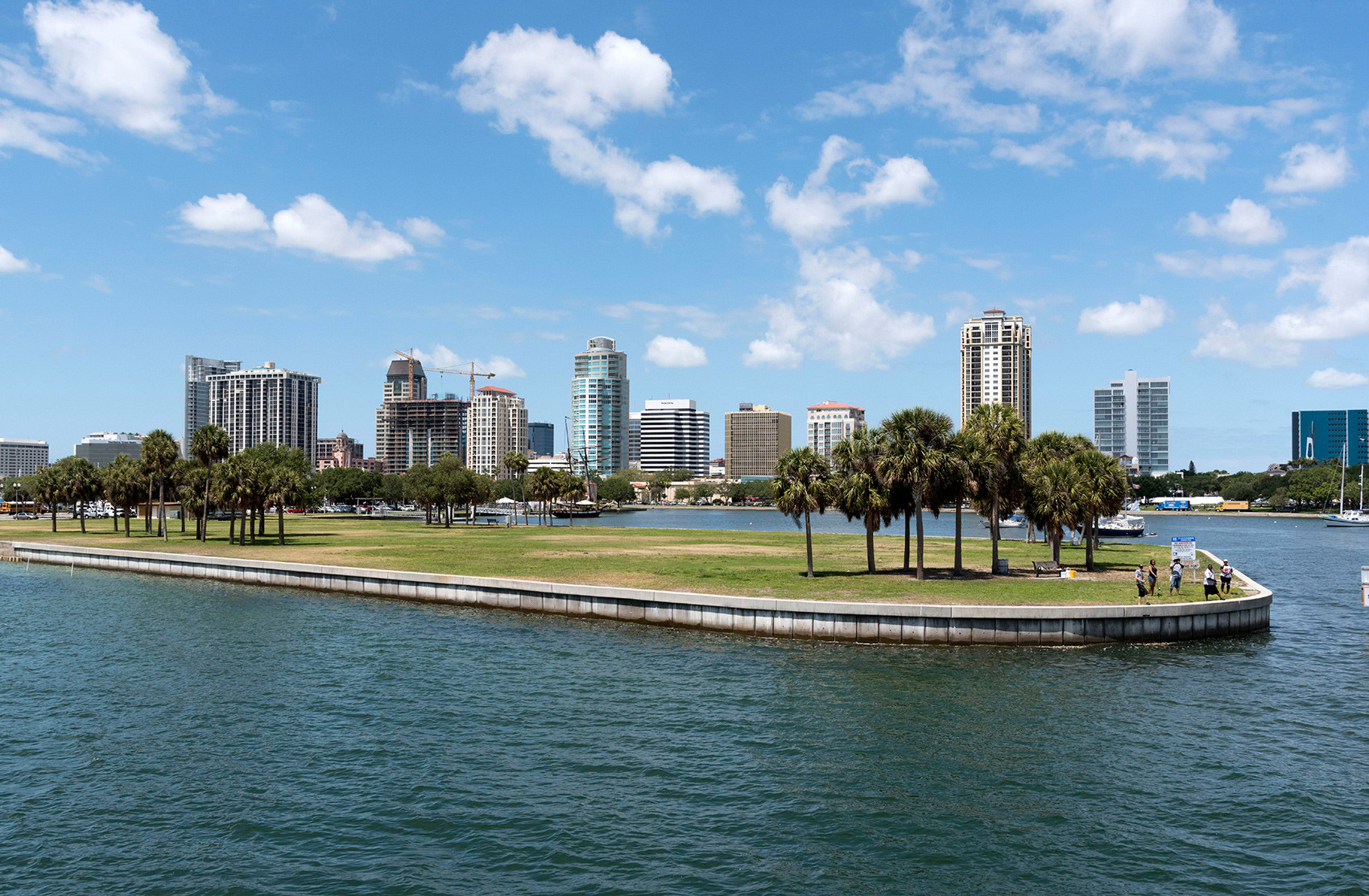 The Mooring Field and skyline view at the harbor entrance to St. Petersburg, Florida.