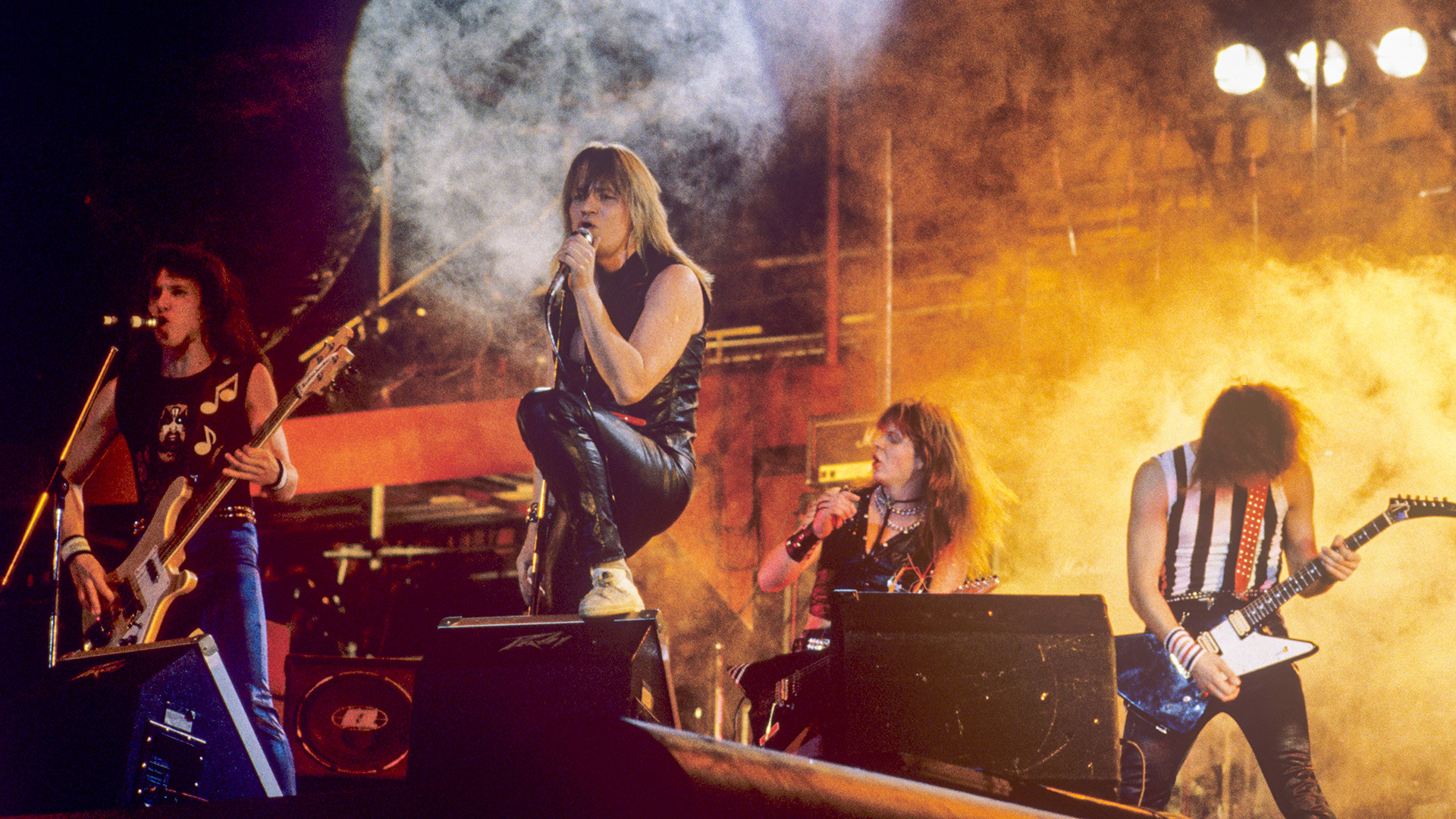 Igor Mikhalev/Sputnik
Heavy metal was nowhere near as widespread in the USSR as pop rock, but some Soviet metal bands are still appreciated nowadays. 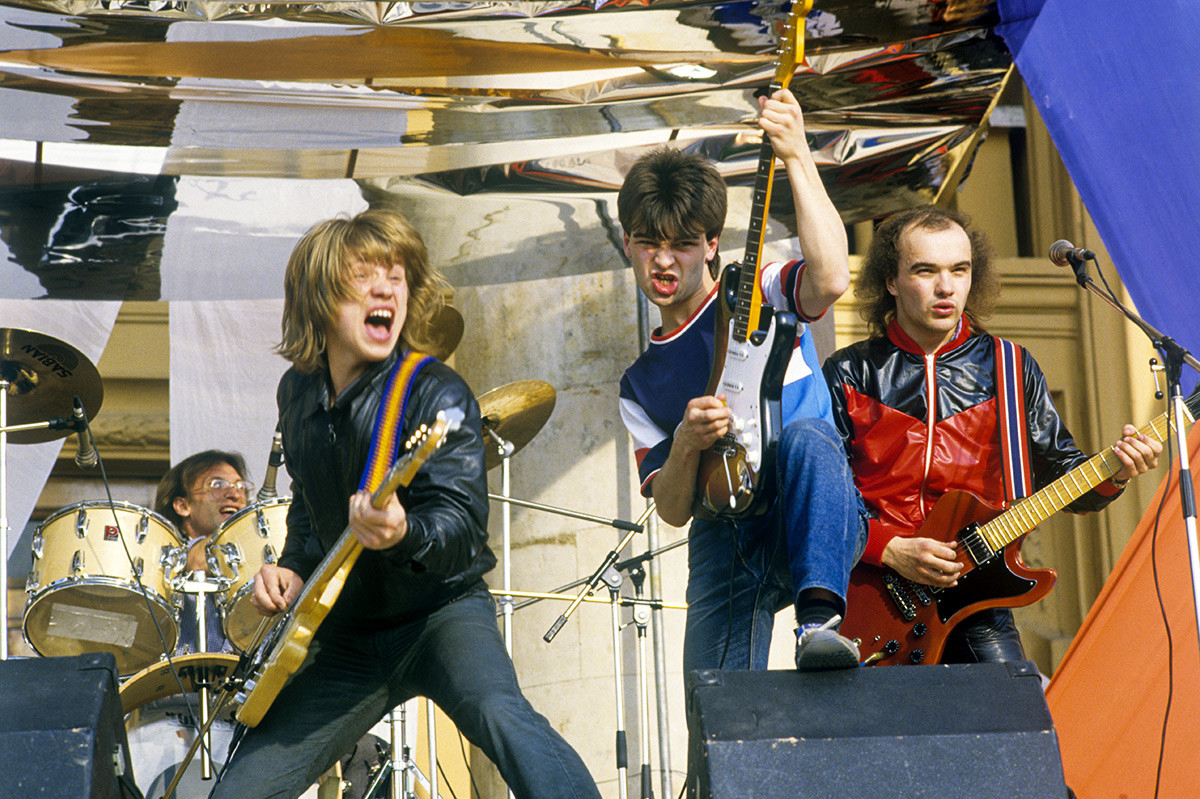 The permanent leader of heavy metal group ‘Chorny Kofe’ (“Black Coffee”) Dmitriy Varshavskiy says the story of his band begins with their first song in 1979. That year, Varshavskiy met Fyodor Vasiliev and they started playing together. After a few years, they performed their first concert in a club called ‘Iskra’ (“Spark”) in Moscow in 1984. That same year, they recorded their first tape album called ‘Pridi i Vse Voz’mi’ (“Come and Take Everything”) with many songs on the topic of love and hope. ‘Chorny Kofe’ played to a lot of full house concerts, but the USSR Ministry of culture considered the group’s songs to be ideologically wrong, as they weren’t dedicated to socialism. They became officially approved only in 1987 and signed a contract with the label ‘Melodiya’ (“Melody”) that provided the musicians a professional studio. In 1992, Varshavskiy went to the USA. His goal there was to see the music industry. In 1999, he decided that he had learned enough and returned to Russia, so ‘Chorny Kofe’ was back. The group has officially released 10 albums and is still performing, being remembered for their professional quality of music and texts dedicated to freedom, Russian culture and religion. 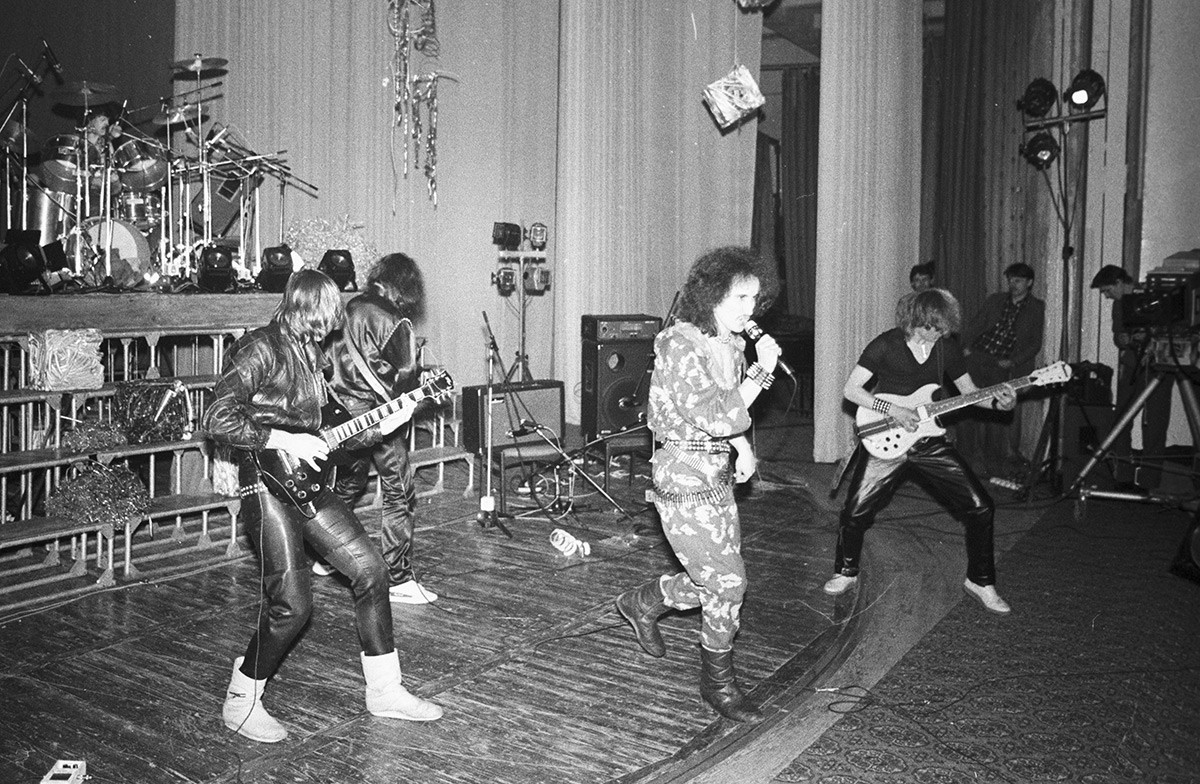 The ‘Legion’ heavy metal band formed in 1979. It was the idea of Oleg Tsaryov, who became their leader and bass guitarist. The early music style of the group resembled (№5, 1993) ‘Deep Purple’ and ‘Black Sabbath’. ‘Legion’ was one of the first (№5, 1993) Soviet metal bands to begin writing their own material, instead of just playing covers. The main themes of their lyrics were history, fantasy and heroism. They played a lot of club concerts and became a cult group in the middle of 1980s. In 1988, ‘Legion’ successfully performed a tour in the USSR, but during it Tsaryov and singer Alexey Bulgakov had strong disagreements, so Tsaryov quit the band. One of the reasons for the conflict was their music style of the old-school heavy-metal of the 1970s - everybody felt (№6, 1993) it had become out of date. The group searched for new ideas. Finally, in 1992, they released the album ‘Knights of Cross’, which was totally original and didn’t resemble the old style at all: It was a mix of progressive metal like ‘Mekong Delta’ and art rock by ‘Uriah Heep’, but continued the tradition of lyrical themes. Nowadays, ‘Legion’ is still a cult example of Russian metal bands: they have already released 10 studio albums. 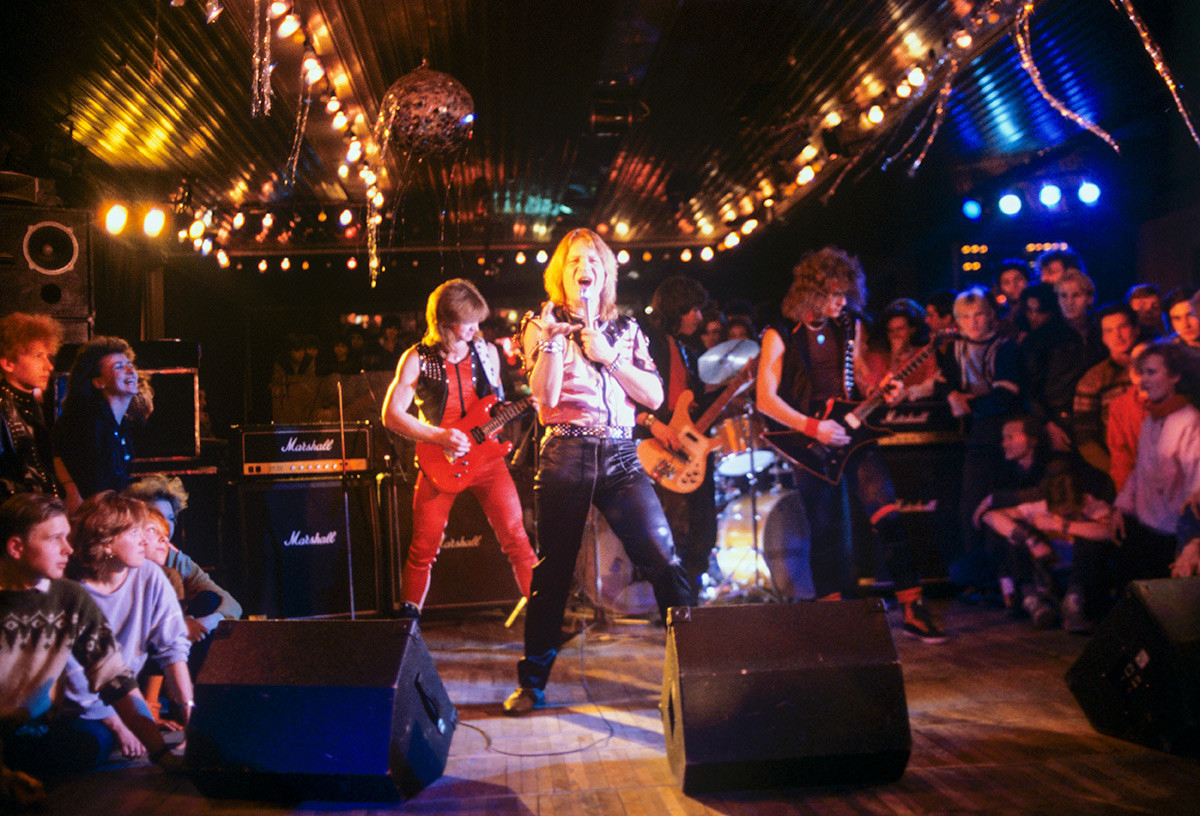 The story of a cult heavy metal band ‘Ariya’ began on October 31, 1985, when the successful debut album ‘Mania Velichiya’ (“Megalomania”) was released. The songs were dedicated to love and bravery. A part of the members had already played together in a band called ‘Poyushchie Serdtsa’ (“Singing Hearts”). Early ‘Ariya’ music resembles the style of ‘Iron Maiden’, because of its significant influence. In 1987, the conflicts in the group led to a breakup, due to which some members separated and created a new group called ‘Master’. In 1994, vocalist Valeriy Kipelov performed a lot with ‘Master’, but the following year he rejoined. In 1998, ‘Ariya’ started a collaboration with the Russian office of the Harley-Davidson corporation. It resulted in three tributes. In 2002, the group changed the vocalist: Artur Berkut took the place of Valeriy Kipelov. ‘Ariya’ still performs and has worked with foreign bands like ‘UDO’ and ‘Rammstein’ and with former members’ projects. 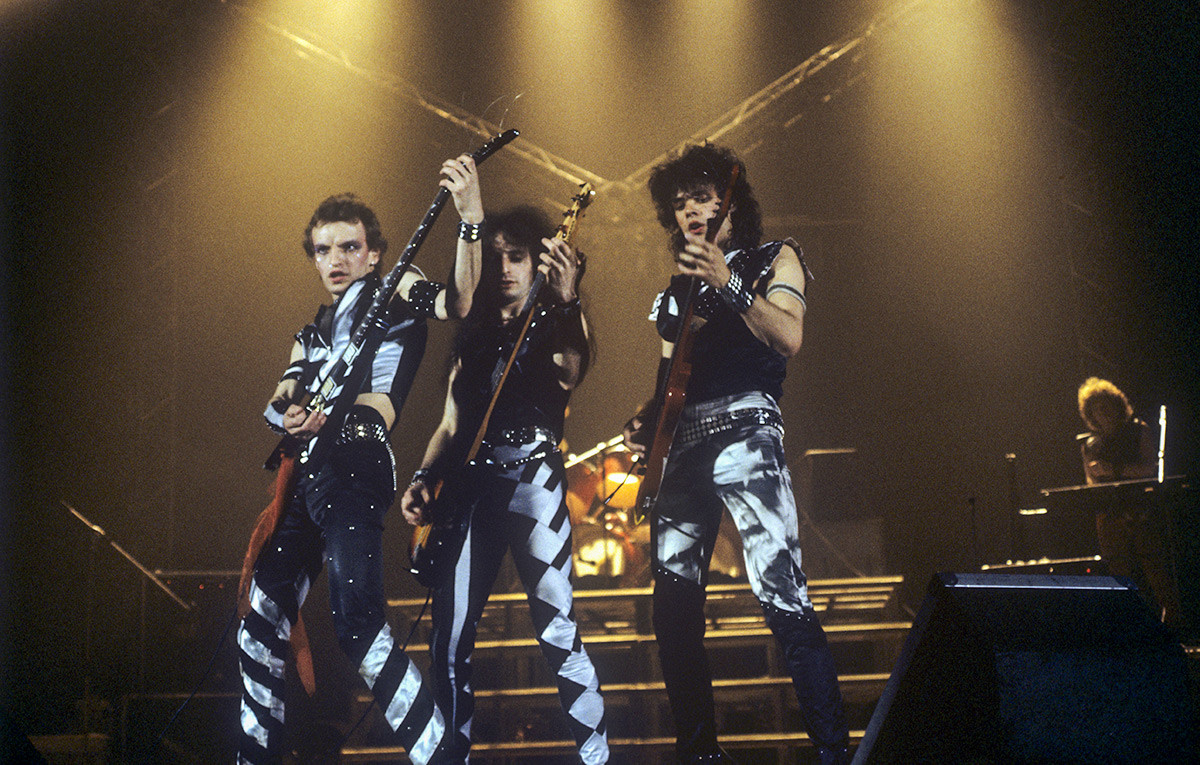 After a conflict in ‘Ariya’ in 1987, four members formed a new band. It wasn’t too easy to find a vocalist, but finally, Mikhail Seryshev took this place. The music style was forming step by step through the months of 1987 and turned into trash-metal, after which ‘Master’ recorded their first self-titled album. The lyrical topics were fantasy, war and love. A million copies of the album were sold. The following year, the group toured Poland and Belgium and it was a success, especially in Belgium. They played 2-3 shows a day in bars and clubs and the audience often admitted that ‘Master’ should be performing in stadiums, instead of small clubs. In 1991, the group recorded their first English-speaking album titled ‘Talk of The Devil’. It was an experiment and had to be released in Belgium, but the label went bankrupt. The album itself keeps the band’s lyrical traditions. In 1991, Mikhail Seryshev took part in recording the Russian version of the rock-opera ‘Jesus Christ Superstar’ performing the role of Christ. In 1999, Seryshev was replaced by Alexey ‘Lexx’ Kravchenko with whom ‘Master’ continues to perform and release new albums. 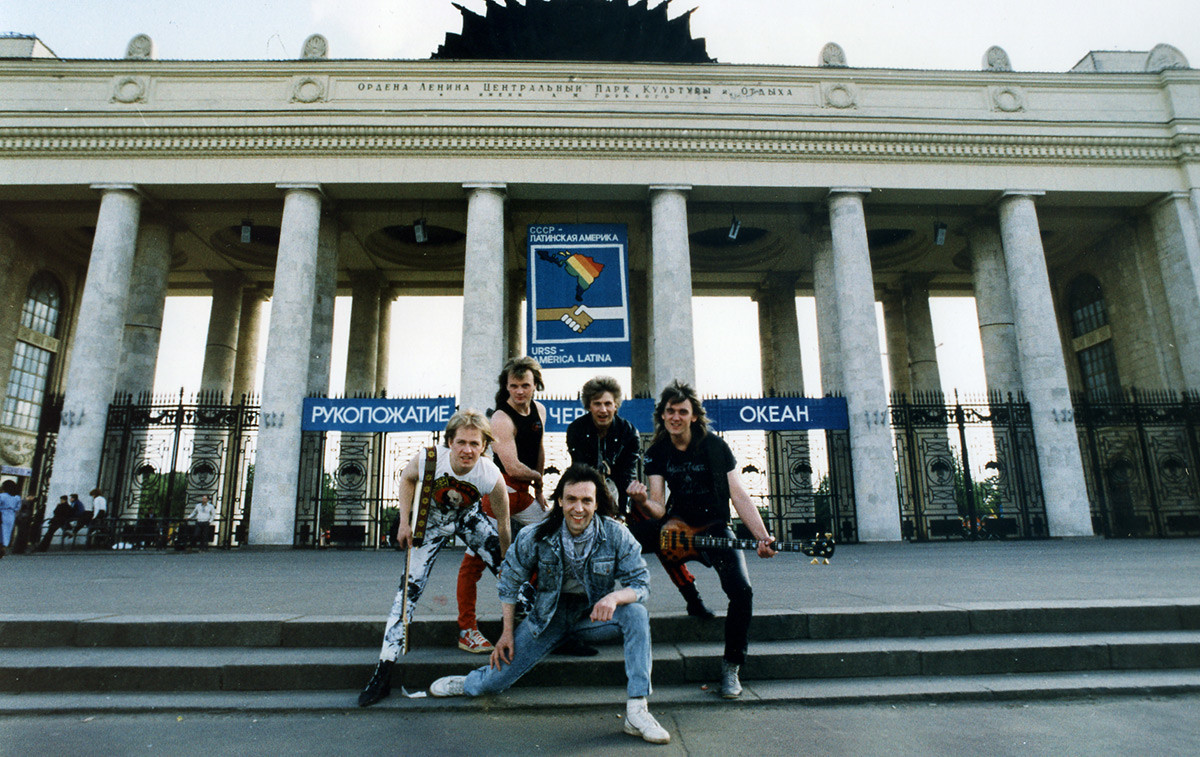 The glam metal band ‘Park Gorkogo’ (also famous as ‘Gorky Park’) was a particular case of Soviet metal: It was an ambitious producer project of a Soviet rock musician Stas Namin. He had decided to open his own producer center based in Gorky Park in Moscow. This is where the group’s name comes from. The ‘Gorky Park’ band was created in the center in 1987. Four musicians were former members of Namin’s group ‘Tsvety’, but vocalist Nikolay Noskov was totally new to them. The style - glam metal - wasn’t common for Soviet music at all. Their costumes looked especially extraordinary, though they were typical for the style. On the contrary, it was in fashion in the USA, but a Russian band was exotic there. Dennis Berardi, the president of ‘Kramer Guitars’ company became the group’s American manager, with whom they went to the USA to make better recordings. It resulted in releasing their debut self-titled album in August 1989. The lyrical topics were love, hope and freedom. One of its songs called ‘Bang’ reached the third spot on MTV’s Top-15. 450,000 copies were sold and in Denmark the release reached (№5, 1993) gold status. That same month, ‘Gorky Park’ returned to Moscow to play with world-famous groups like ‘Bon Jovi’ and ‘Scorpions’ at the Moscow Music Peace Festival. MTV was airing the festival in 59 countries. However, in 1990, Noskov quit the band. Without him, the group’s story came to an end. There were some attempts to reunite, and ‘Gorky Park’ managed to release 3 more studio albums, but they weren't really successful.