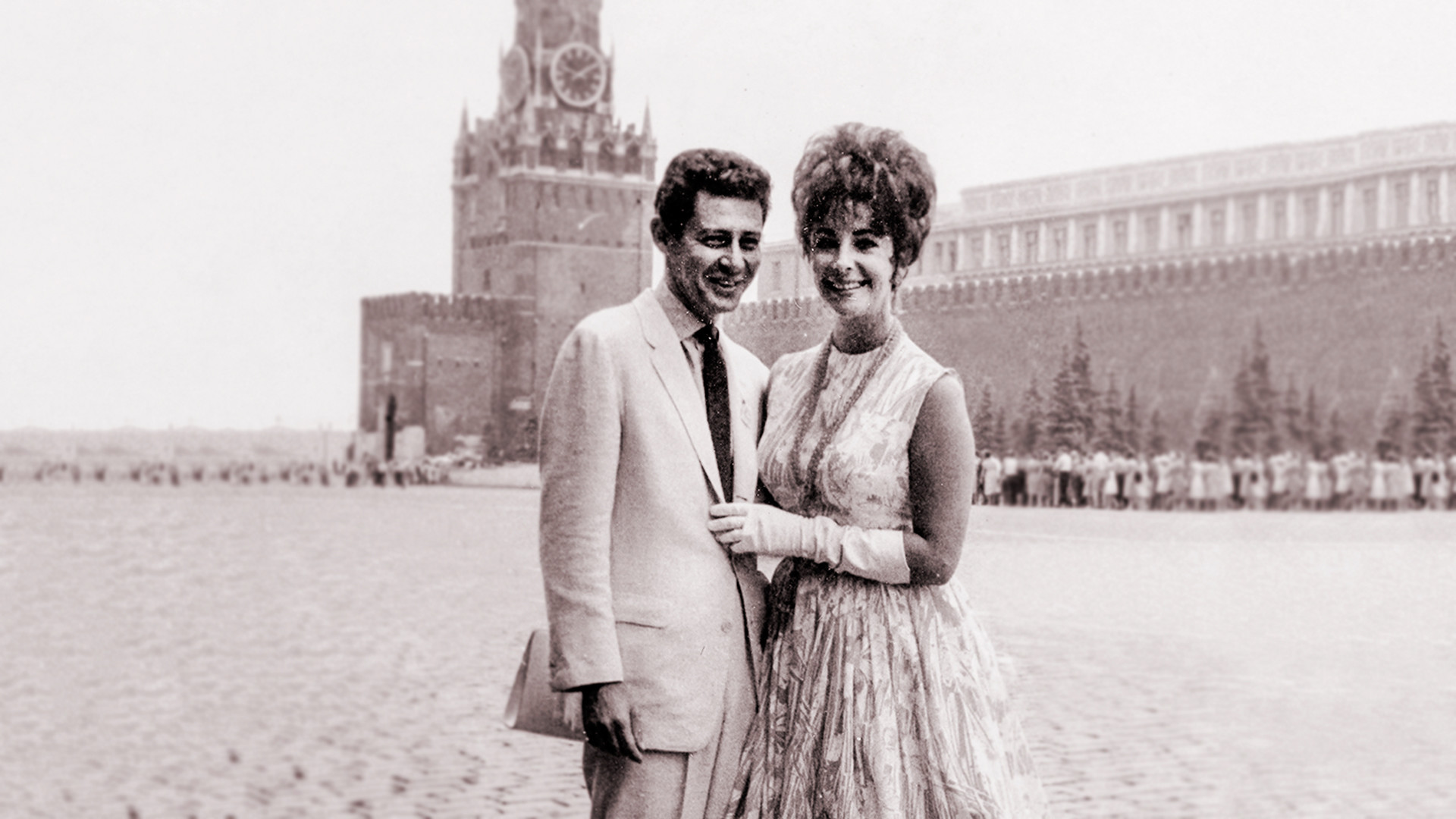 Legion Media
The actress visited the Land of the Soviets more than once and even appeared in films there.

The Soviet people knew and loved Elizabeth Taylor. Many of her films where shown in movie theaters across the country. Rhapsody was one of the first U.S. films to hit the Soviet box office, while Cleopatra was seen by almost 33 million Soviet viewers, according to the Kinopoisk website.

Taylor first came to the USSR in 1957, yet little is known about this visit. During the trip, she and her then-husband Michael Todd demonstrated a new widescreen film format that Todd's company had developed. Soviet film industry bosses were impressed and promised to mull it over, but soon afterwards Todd died tragically in a plane crash and the project was shelved. However, the USSR carefully studied the technology and later started using it in cinema. 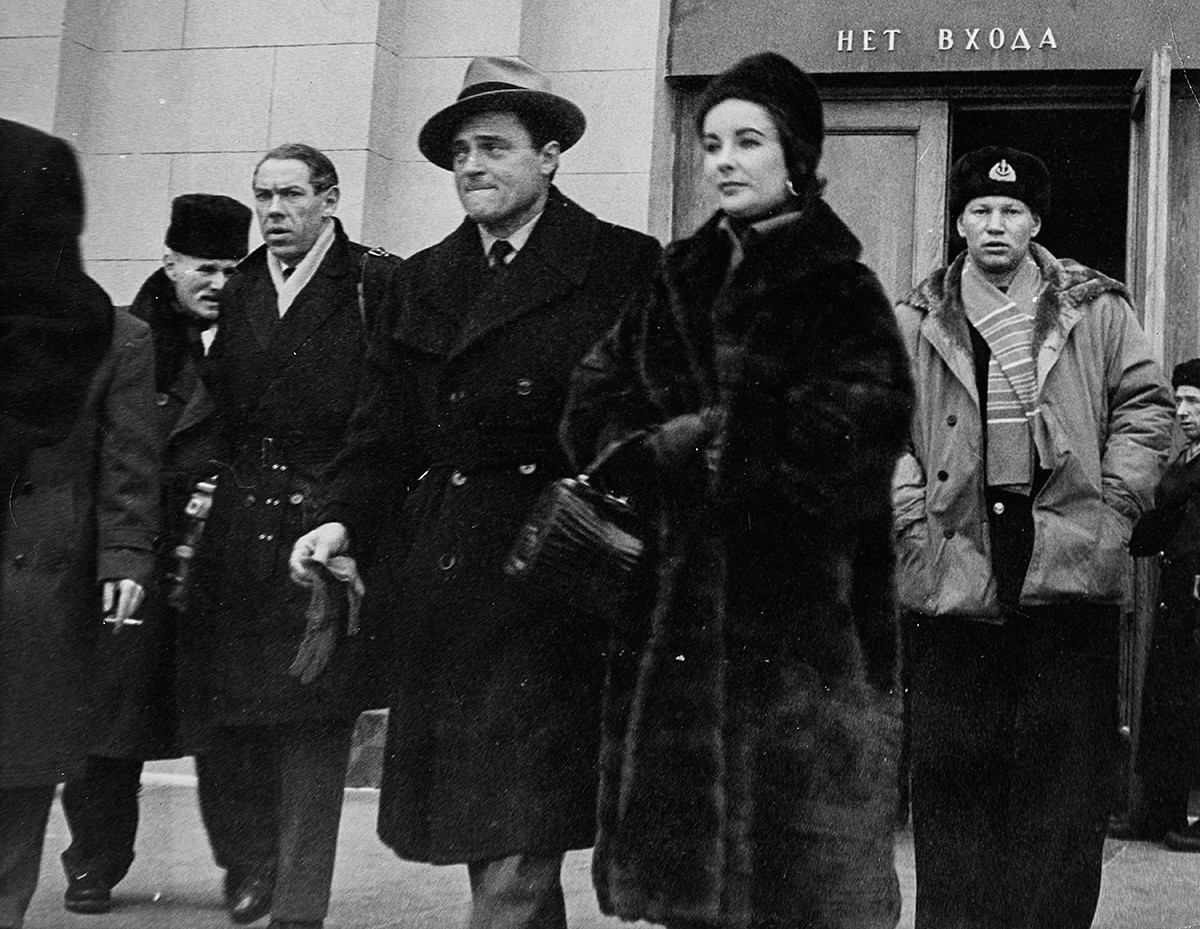 Elizabeth Taylor and her husband Eddie Fisher greeted on their arrival at Moscow airport, 1961

In 1961, Taylor returned to the USSR to attend the 2nd Moscow International Film Festival with her new husband, Eddie Fisher, the son of Russian émigrés. It was one of the first official visits to the country by movie A-listers, which naturally made a splash. All media attention was transfixed on the Hollywood stars’ sojourn behind the Iron Curtain. 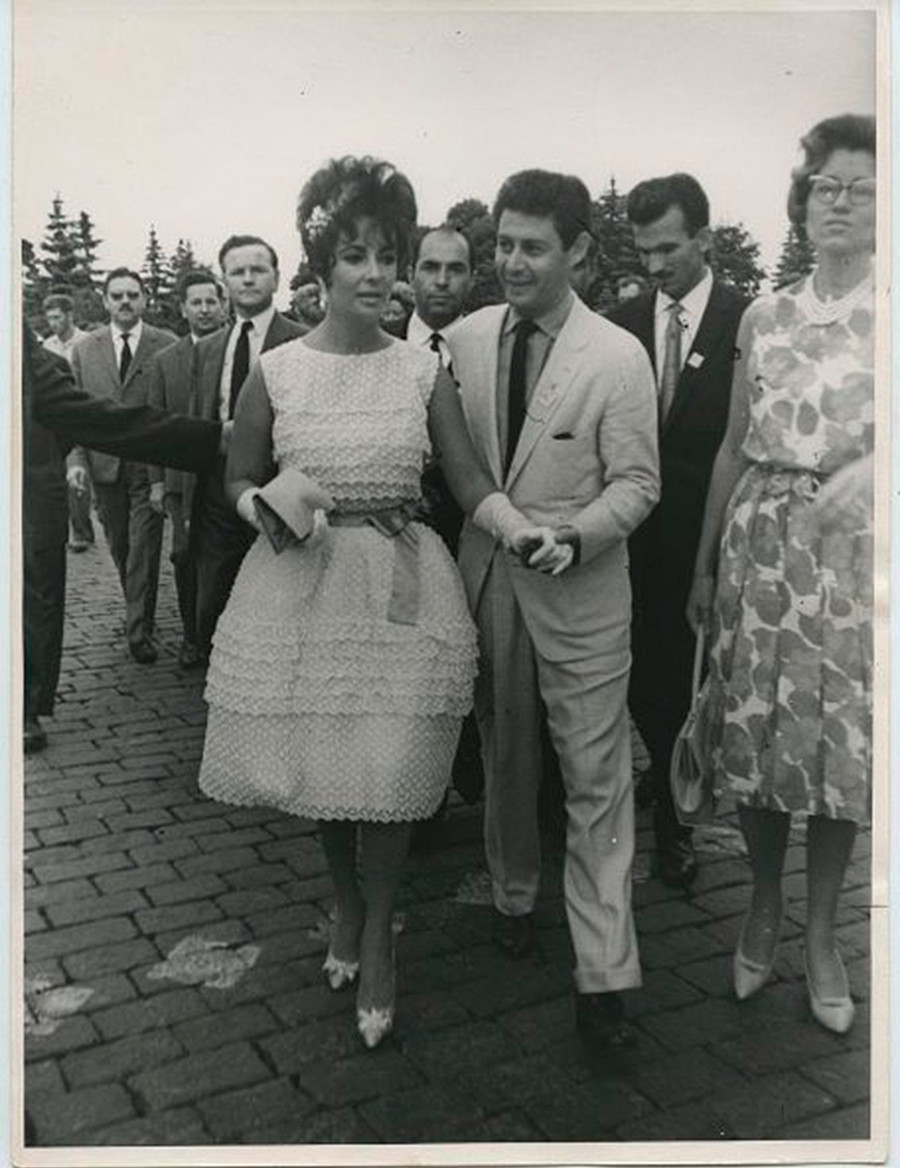 Elizabeth Taylor and Eddie Fisher in the Kremlin, 1961

But it was a minor scandal that stole the headlines. The actors were invited to a gala reception in the Kremlin, where it turned out that Taylor and Italian actress Gina Lollobrigida were wearing identical dresses. True, reporters noted that Taylor's outfit was made by Yves Saint Laurent, while Lollobrigida's was only an imitation. 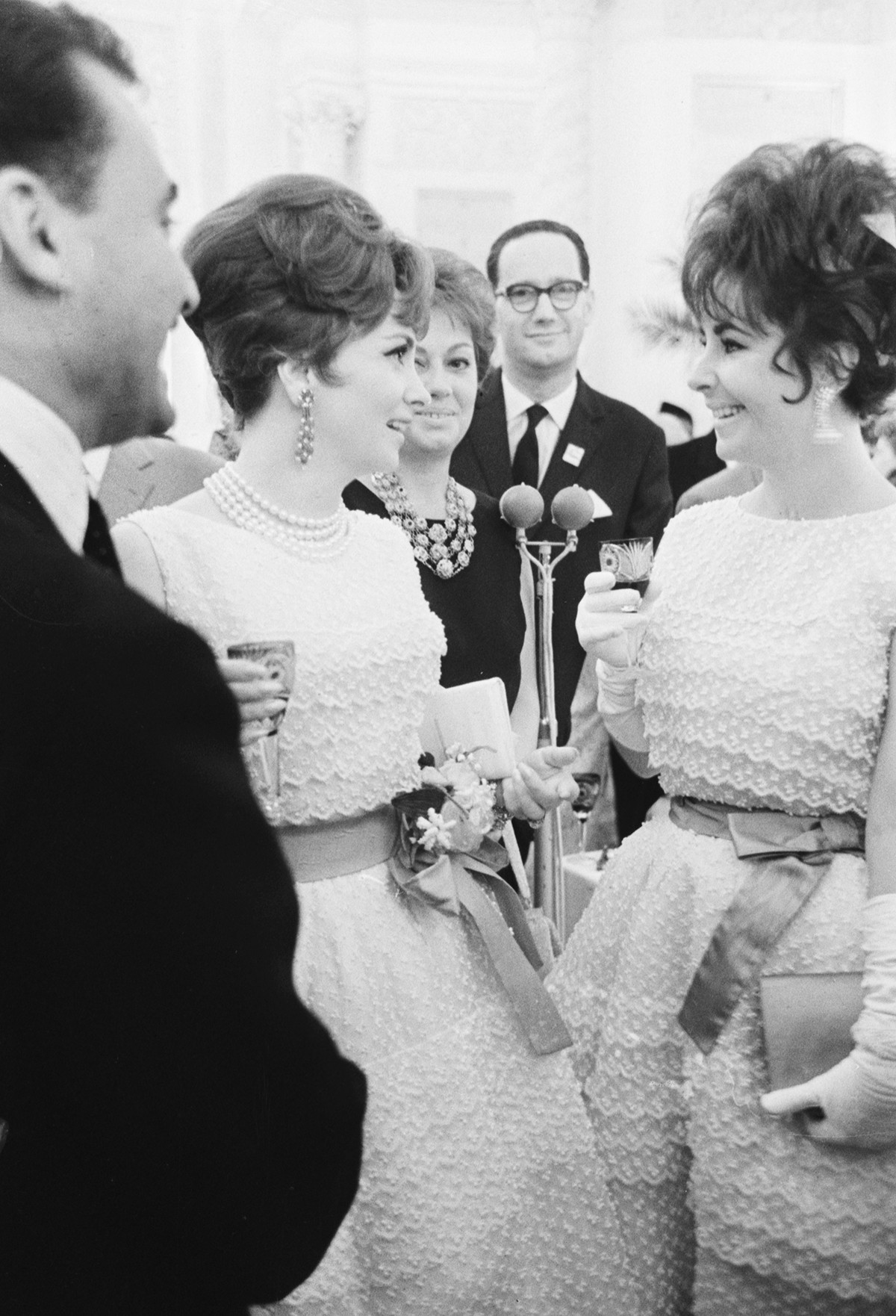 Elizabeth Taylor (R) and Gina Lollobrigida during a reception in the Grand Kremlin Palace at the 2nd Moscow International Film Festival, 1961

However, the actresses resolved the situation with dignity and a Hollywood smile. Gina allegedly made the first contact, saying to Elizabeth: "What a beautiful dress!"

Taylor was also captured in several photos with one of the most popular Soviet actresses of the 1960s, Tatiana Samoilova. 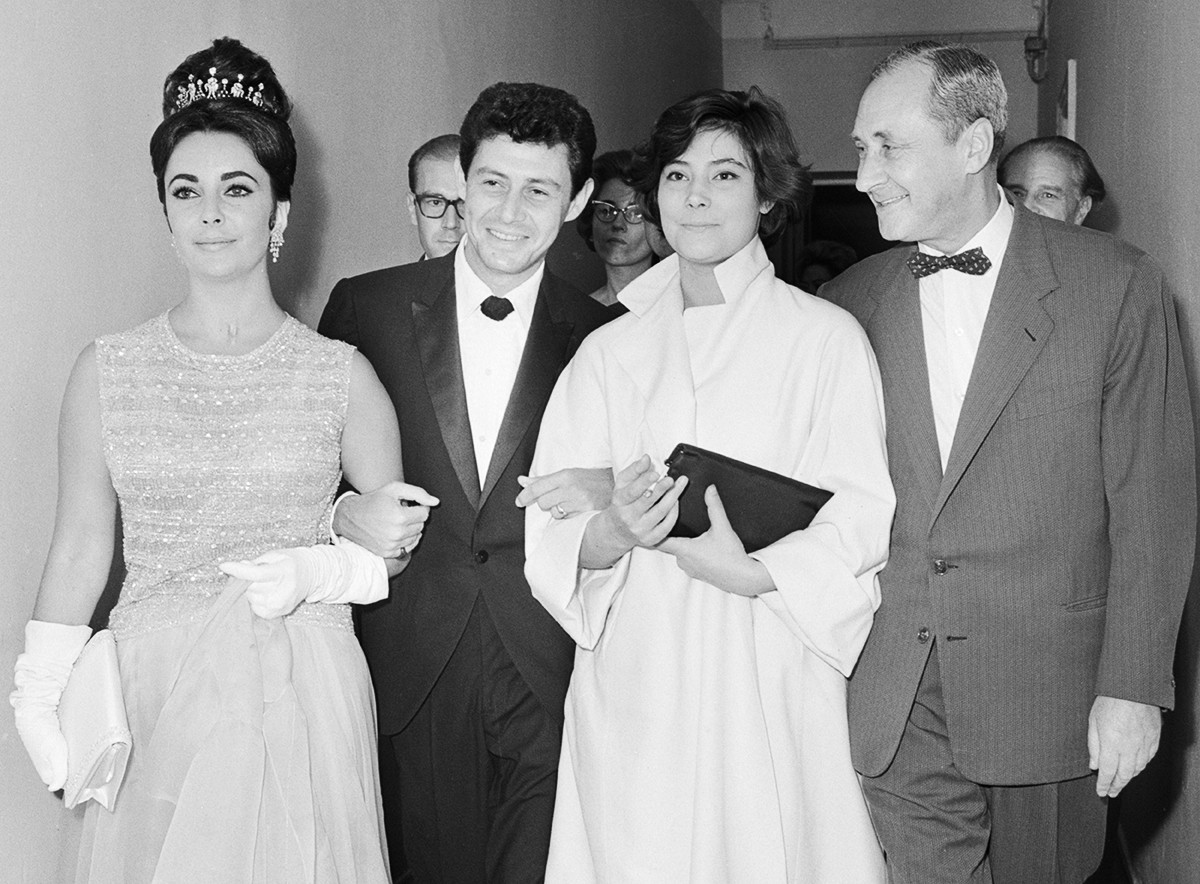 The actresses had met back in 1958, when Samoilova attended the Cannes Film Festival with the movie The Cranes Are Flying, which took the Golden Palm. 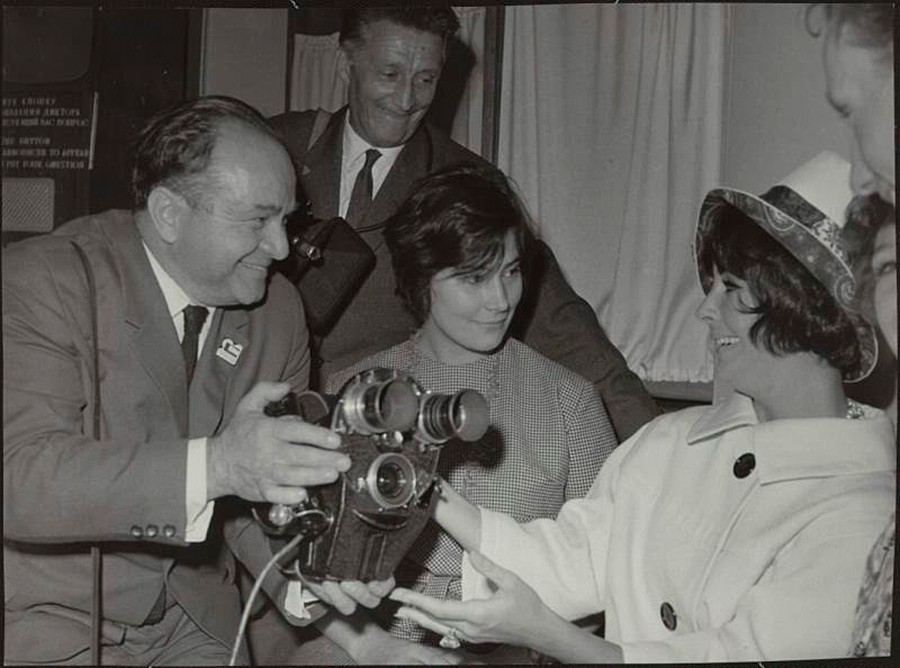 In the mid-1970s, Taylor went to the USSR again, this time to star in the first U.S.-Soviet film, The Blue Bird. The picture was a joint production between the Soviet studio Lenfilm and 20th Century Fox. It was directed by George Cukor. 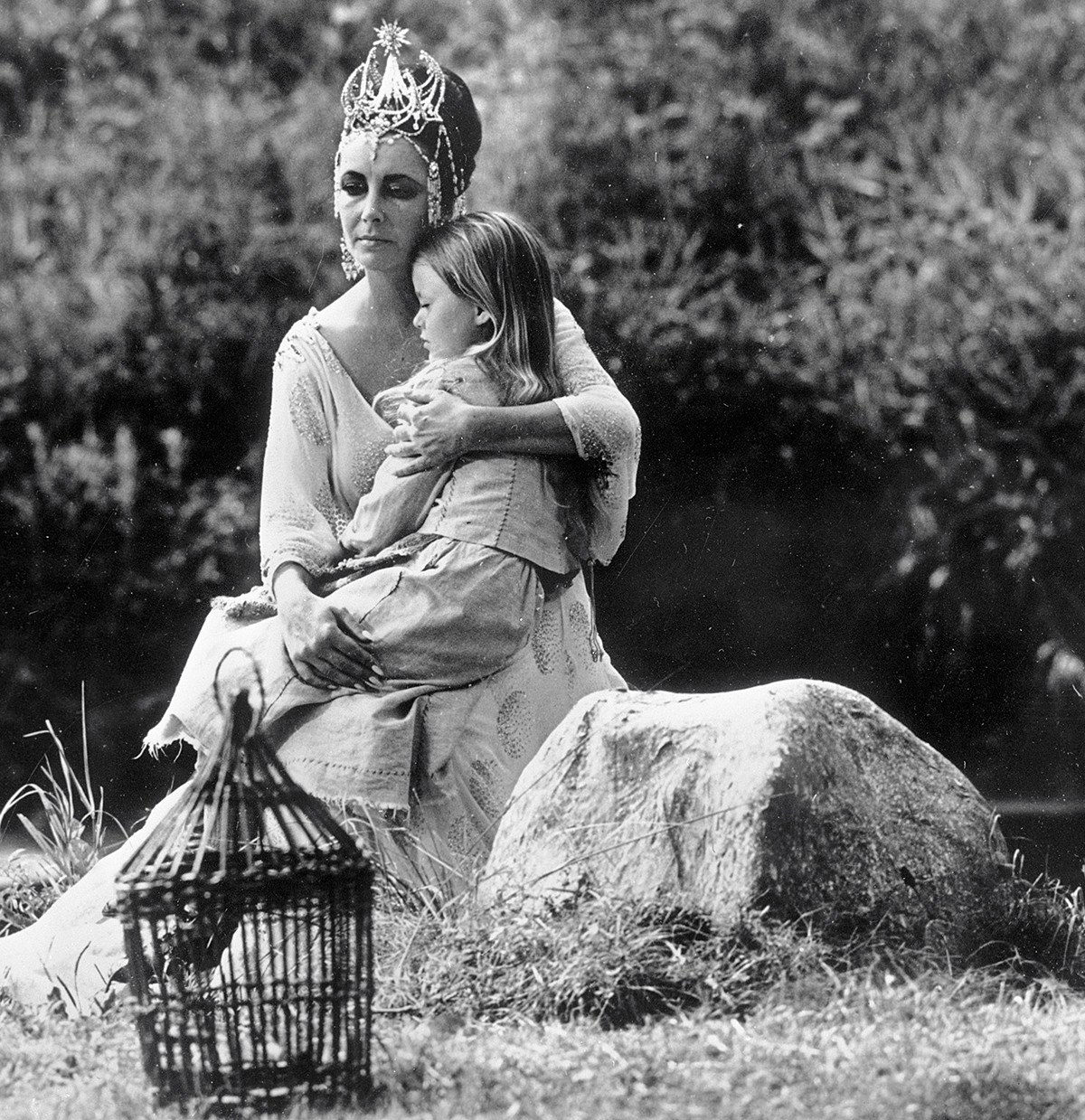 Shooting took place entirely in the USSR — in and around Moscow, Leningrad, Yalta and Riga — and lasted about nine months. In this musical fairytale, “the queen of Hollywood” naturally played the main role of the fairy. Incidentally, all the leads were played by Americans — Soviet actors only appeared in bit parts. 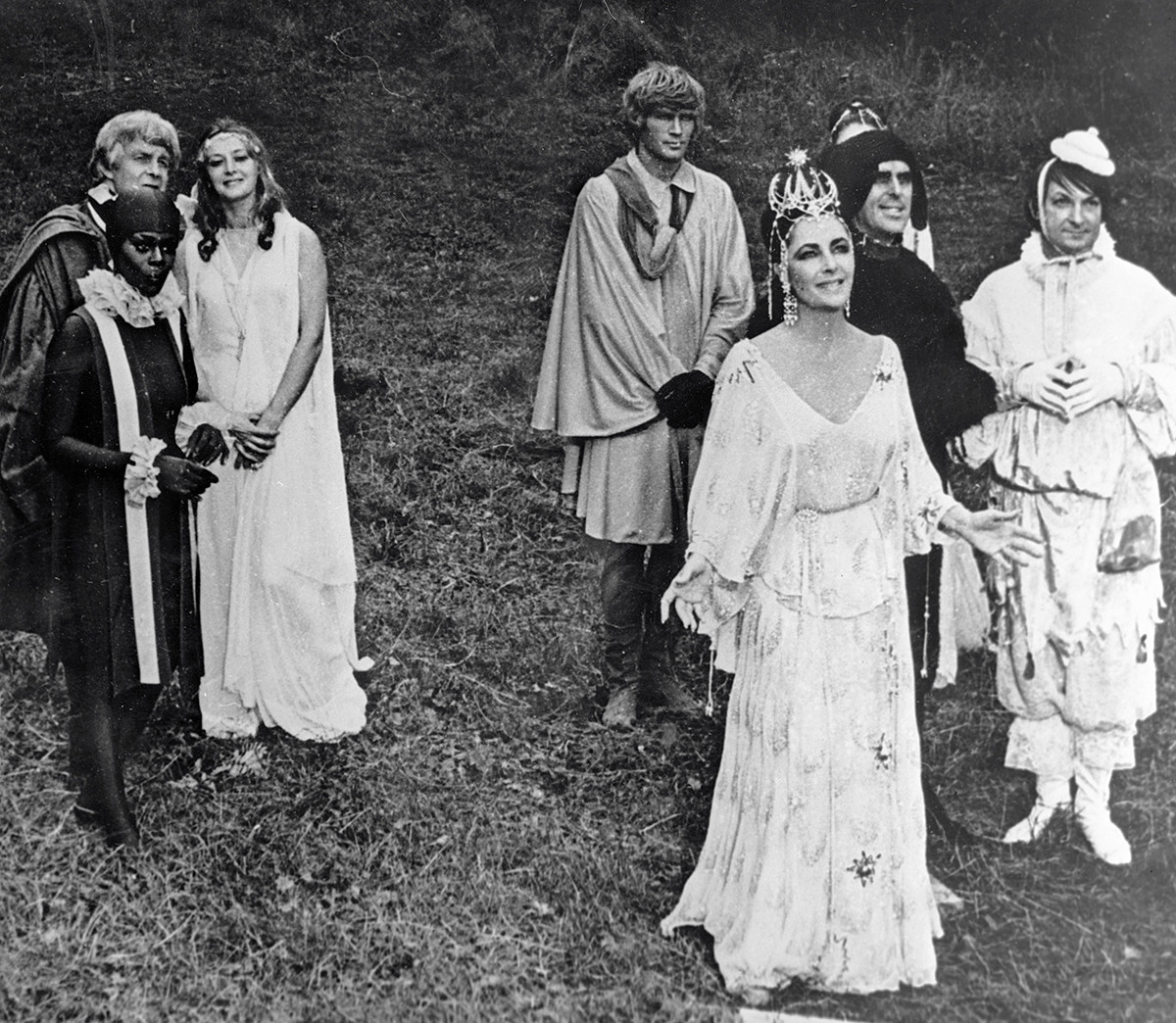 There are various rumors about Taylor’s behavior on and off set. According to one, 20th Century Fox allegedly demanded that the actress be greeted at Leningrad airport with a guard of honor and fireworks display right there on the runway. The local authorities refused, but did agree to renovate the studio at Lenfilm and, to the delight of the Soviet actors, installed new foreign-style toilets.

Legend also has it that Taylor’s favorite whiskey, Jack Daniels, was delivered specially to the USSR. At that time, the USSR was the midst of the latest anti-alcohol campaign, and high-quality liquor was in short supply. 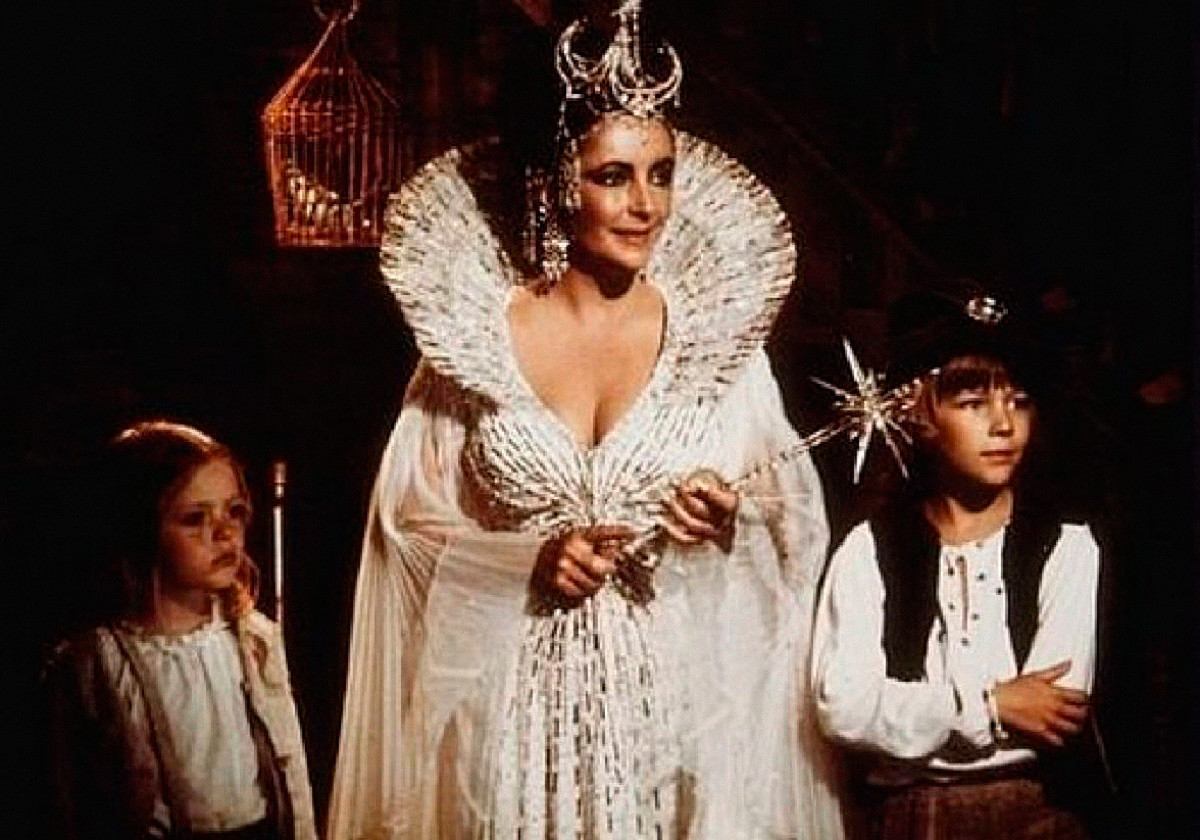 A still from 'The Blue Bird' movie

Actor Gennady Vengerov remembers some interesting details about the filming. His uncle Yefim Zarkh worked as a lighting operator on The Blue Bird, and Taylor allegedly took a liking to him. “Arriving on the set, the first thing Elizabeth did was greet Yefim, who looked a lot like Richard Burton.” When filming was over, the actress presented Zarkh with a huge canvas photo portrait of herself. 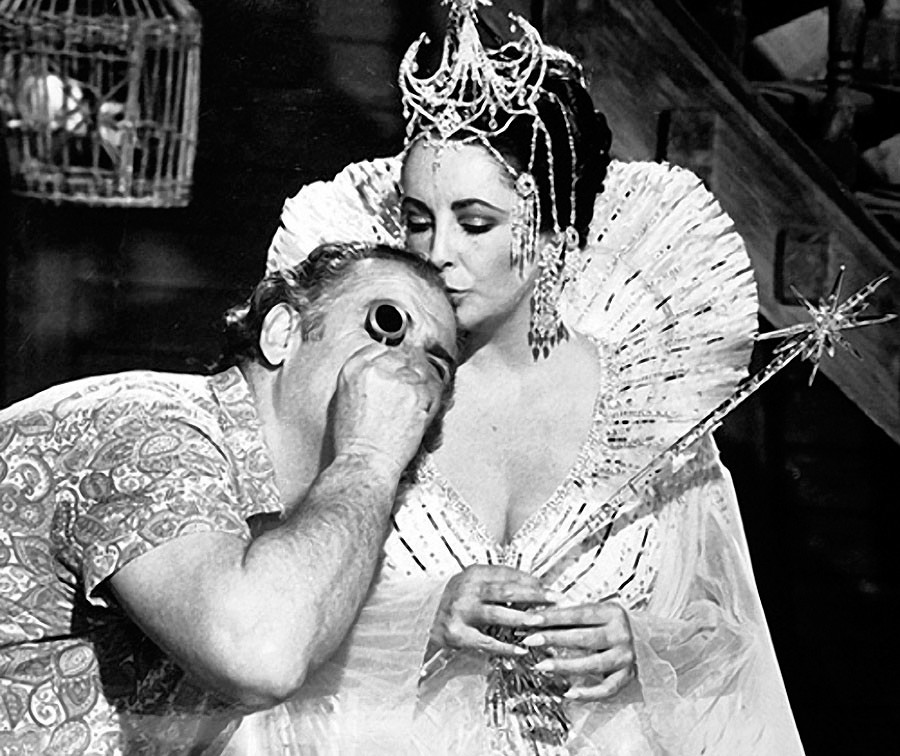 The Soviet actors were strongly advised not to mix socially with the foreigners, and the film shoot was often attended by security officers. The two sets of actors even took meals in different places. Vengerov recalls another incident: on one of the first days of filming, when lunchtime was announced, the Soviets took out their usual packed bread rolls and kefir, while the Americans had food delivered from the restaurant of the Astoria Hotel. “Noticing this, Taylor kicked up a stink: ‘Either feed everyone from the restaurant, or I won't be filming.’ Equality prevailed.” 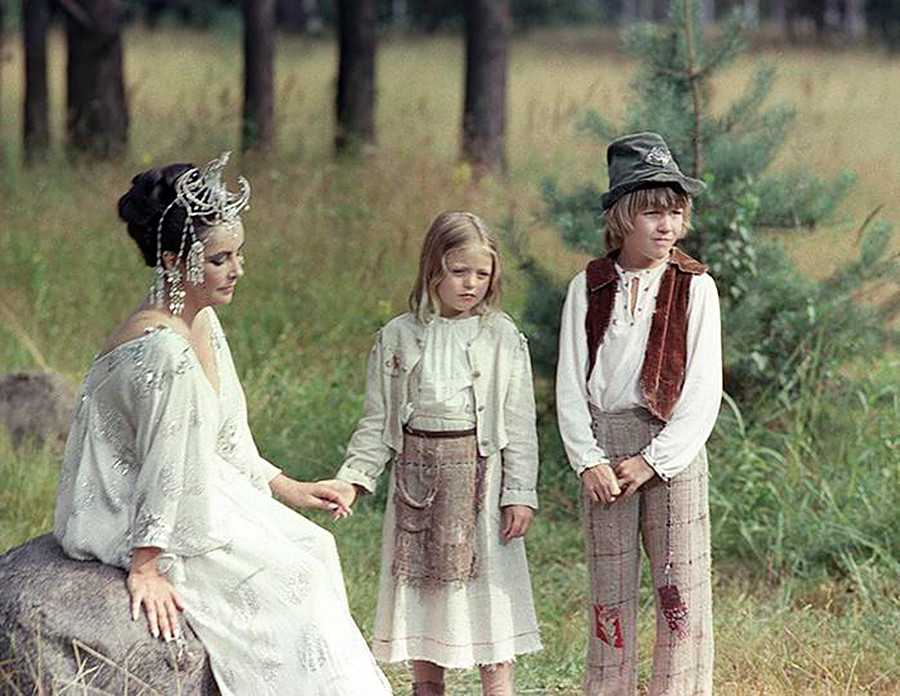 A still from 'The Blue Bird' movie

Soviet actress Lyudmila Chursina recalls that Taylor made a contradictory impression. During filming of The Blue Bird, a U.S. cruiser docked in Leningrad on a friendly visit, and the actors and directors were invited aboard, including the Soviets. The group waited a long time for Taylor to show up, and when she finally did, she was in a foul mood. This became worse when she learned that alcohol was banned on board. The actress paid no attention to her Soviet colleagues, talking only with the sailors and American actors. “She cheered up on seeing some cute young Soviet sailors. Her inner woman switched on, and she began to smile and cast coquettish glances.” 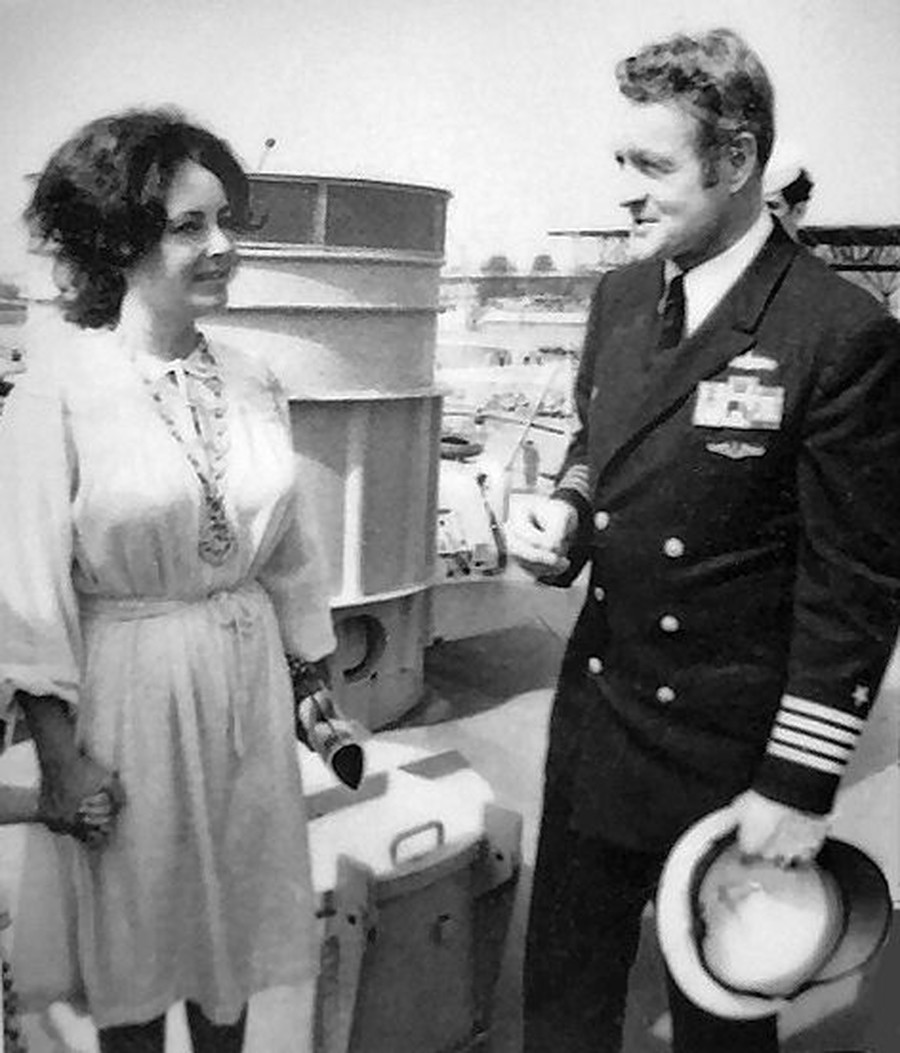 Elizabeth Taylor and the commander of the USS Leahy, Alex Sinclair, in Leningrad, July 1975

According to another eyewitness, director Vitaly Melnikov, at the end of the reception the Hollywood star, having complained all evening about the sluggishness of Lenfilm, suddenly asked in which direction the film studio lay. On being shown, Taylor asked the commander to point a missile in that direction. For a U.S. naval officer to direct a missile at a Soviet city could have provoked an international scandal, but, having contacted Washington, the captain received approval. “Soon a rumbling was heard, and the missile launcher on the ship's bow began to slowly unfold. You should have seen the faces of our officials, and Taylor applauded.”