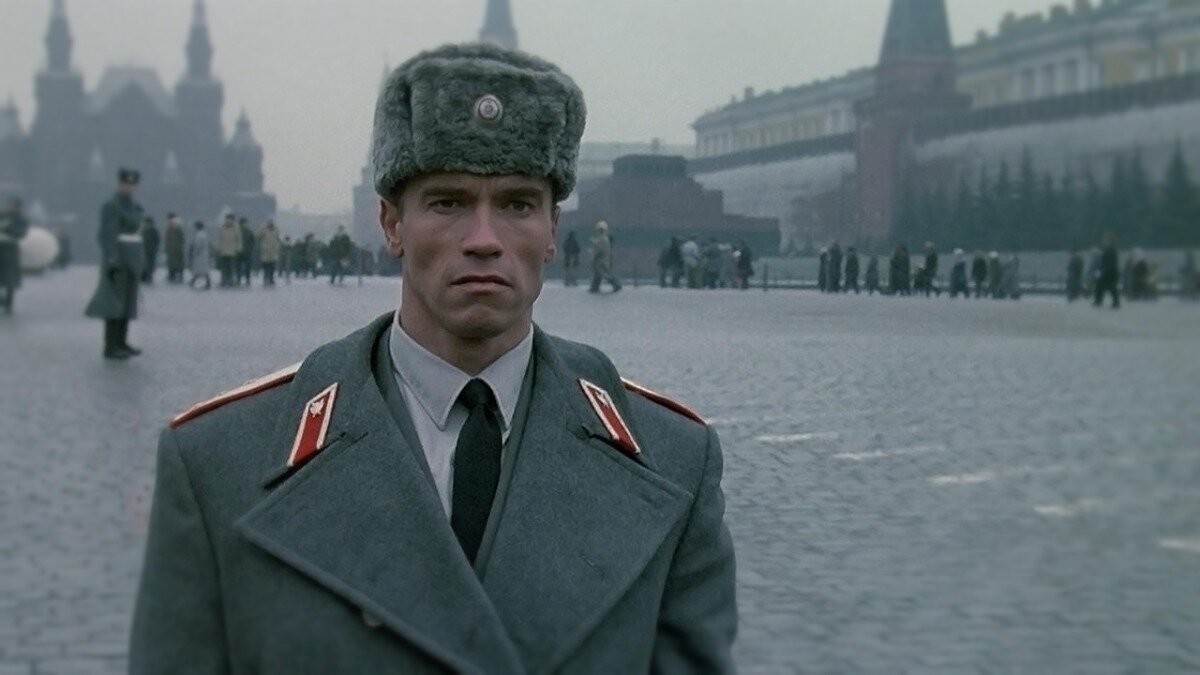 A still from 'Red Heat'

What hasn't been filmed here! The hapless heroes of the Police Academy series paid a visit. Arnold Schwarzenegger in Soviet military uniform posed against the backdrop of St. Basil’s in Red Heat.

In Cast Away, Tom Hanks’ character worked at a FedEx office near Red Square, and after filming the actor recalled that it was an amazing experience: January that year was so warm that snow had to be brought in. 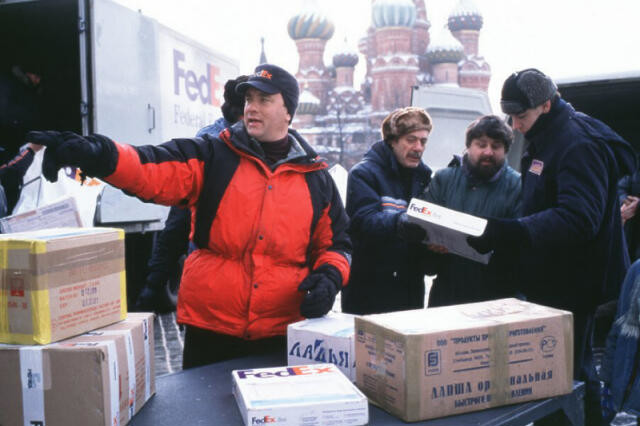 A still from 'Cast Away'

In The Bourne Supremacy, a blood-pumping car chase takes place along Komsomolsky Prospekt, Rozhdestvensky Boulevard, Trubnaya Square and, towards the finale, among the blue-and-white high-rise buildings of Krylatskoye District. 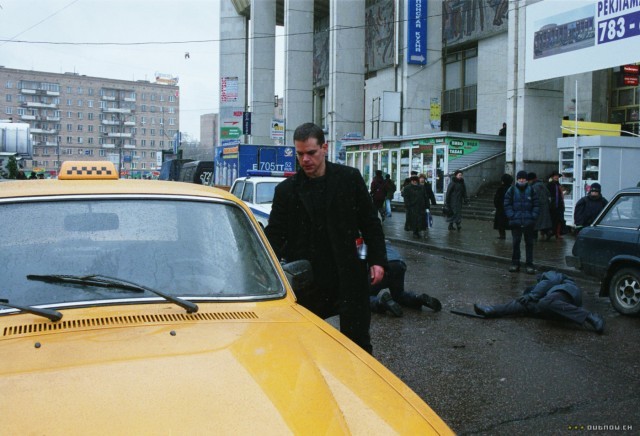 A still from 'The Bourne Supremacy'

Aliens attack the Russian capital in The Darkest Hour — a fantasy action movie filmed in the very center of the city, so some scenes took several days to shoot. 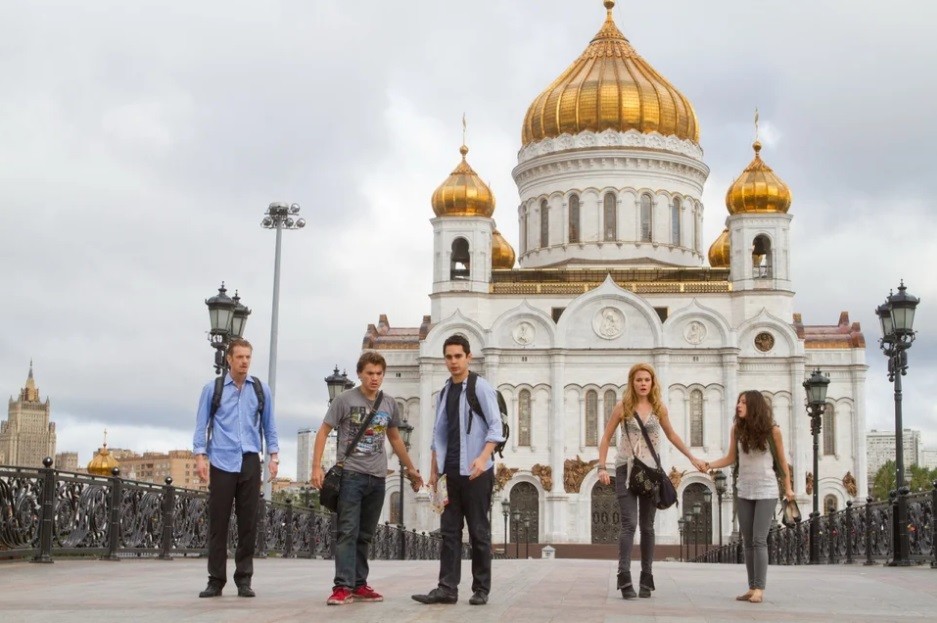 A still from 'The Darkest Hour'

VDNKh and Pirogovskaya hospital, as well as the Ukraine and National hotels, an apartment block on Verkhnyaya Maslovka street, and Kolomenskoye Park were just some of the locations in the spy thriller The Russia House, starring Sean Connery, Michelle Pfeiffer and Klaus Maria Brandauer.

Fred Schepisi’s picture was the first foreign film shot entirely in the USSR. Since one of the characters is a publisher and a frequenter of book fairs, the scene at the grave of Boris Pasternak in the dacha settlement of Peredelkino is especially symbolic.

The palaces of St. Petersburg and their environs are ideal for shooting historical films and screen adaptations of Russian classics. In Onegin, directed by Martha Fiennes, the brooding protagonist strolls along the frozen Neva against the backdrop of the Admiralty spire, and duels with Lensky somewhere near the village of Lisy Nos. 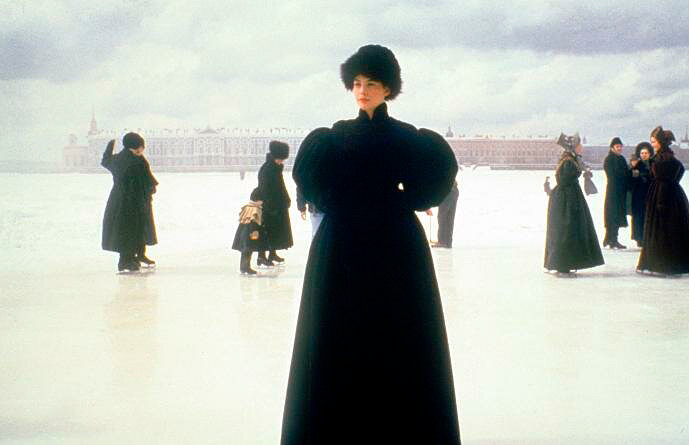 A still from 'Onegin'

The Demons of St. Petersburg, an Italian film about Dostoevsky, was seemingly the first to show the writer’s apartment on Malaya Meshchanskaya street. Here too are some instantly familiar views of the Catherine Palace at Tsarskoye Selo and Palace Square.

In the movie, whilst working on his novella The Gambler, Dostoevsky meets a member of a terrorist cell who recently assassinated a member of the tsarist family and is planning further atrocities. 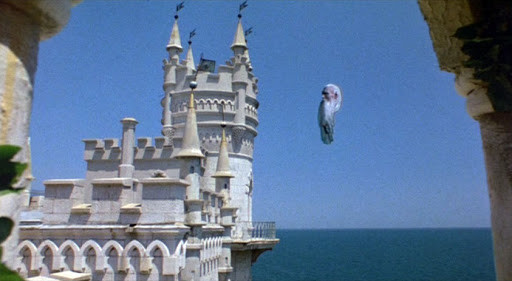 A still from 'Mio in the Land of Faraway'

Although the credits of Mio in the Land of Faraway (Swedish: Mio min Mio) include Russian director Vladimir Grammatikov, the project was a co-production by Sweden, Norway and the USSR. It features a stellar cast. Yum Yuma, a friend of the protagonist, is played by Christian Bale, and the villain by Christopher Lee.

In the story, the boy Bosse is transported to the magical Land of Faraway, where he has to do battle with the evil wizard Kato, who kidnaps children and turns them into birds. Some scenes were shot in Stockholm, but the nature for the fairy-tale part was found in Crimea. The neo-Gothic Swallow’s Nest Castle and Vorontsov Palace with its extensive park are easy to spot: they provided the perfect backdrop for Astrid Lindgren’s fairy tale.

In 2004, director Mika Kaurismäki, elder brother of Aki Kaurismäki, made Honey Baby, turning the Ancient Greek myth of Orpheus and Eurydice into a road movie set in Kaliningrad. The main character, failed musician Tom, dreams of touring in Paris, but instead goes to Kaliningrad. There he meets Natasha, who has run away from her fiancé — the lovebirds join a traveling circus, pursued by thugs hired by Natasha’s ex.

All the main features of the city are captured on screen: the Atlantika restaurant, the “robot’s head” House of Soviets and the then-unfinished Second Trestle Bridge, which connected the banks of the Pregolya River only many years later. 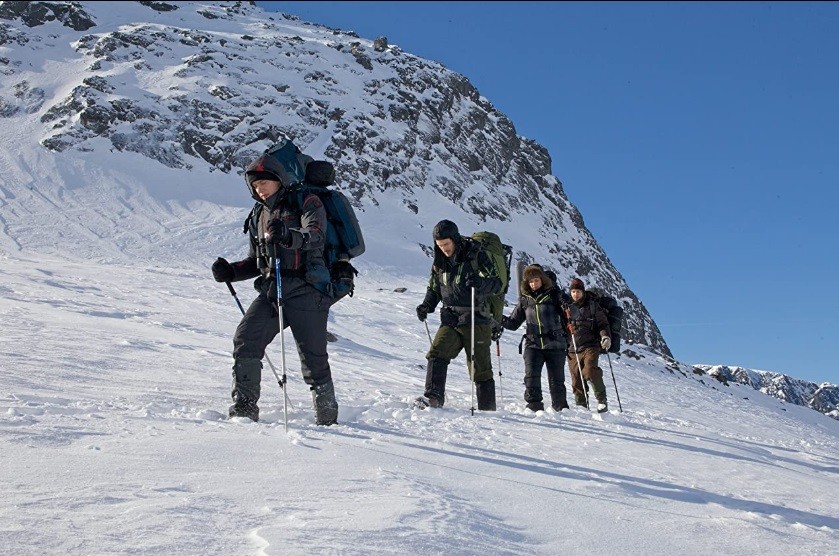 A still from 'Devil's Pass'

For more than 60 years, the gruesome demise of Igor Dyatlov’s mountaineering expedition has been shrouded in mystery and speculation, ranging from outlandish conspiracy theories to quite prosaic explanations. 2013 saw the release of Rennie Harlin’s horror movie Devil’s Pass (original title: The Dyatlov Pass Incident), in which five U.S. college students set off to find out what happened to the Russian hikers.

Shooting took place not in the Urals, but in the Khibiny Mountains on the Kola Peninsula — the director cited the need for a “snowy picture” in not-too-harsh weather conditions. The role of the settlements of Ivdel and Vizhay in Sverdlovsk Region is “played” by the polar town of Kirovsk in Murmansk Region.

The director, whose credits include Die Hard 2, opted for the most lurid, crowd-pulling version of events: there is mysticism, secret experiments and even teleportation and time travel. 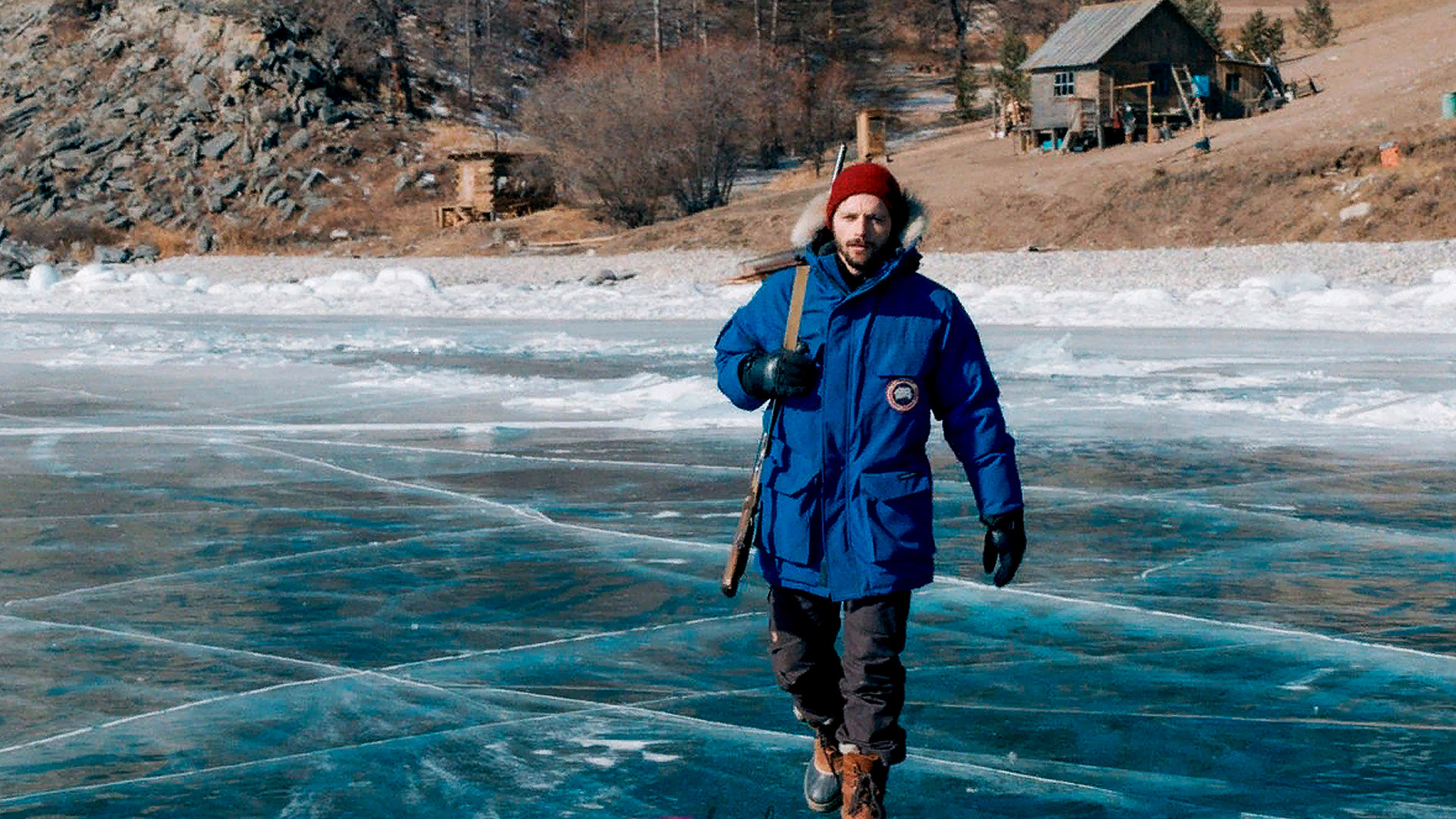 A still from 'In the Forests of Siberia'

In the Forests of Siberia, directed by Safy Nebbou, is a screen adaptation of works by writer Sylvain Tesson. For six months, Tesson lived on the shores of Lake Baikal in a simple hut. Nearby was the Baikal-Lensky Nature Reserve, a cedar forest, surrounded by the frozen lake. He came here to escape the din of Paris life and get rid of “all that is superfluous.” The author wrote two books about his personal quest: The Consolations of the Forest: Alone in a Cabin on the Siberian Taiga and Baikal. 180 Days of Solitude, which formed the basis of the film.

“I wanted to live simply, slowly, so that the most important thing remained,” says Teddy, the film’s protagonist. Having settled in his hut, first things first, he cuts away the curtain from the window so that nothing will interfere with his view of Baikal at any moment. Everyday life is as simple as can be: water comes from pieces of ice, light from a stearin candle. For entertainment, he plays chess with himself, reads books and plays the trumpet right on the ice, the sound reverberating for many miles around.

Tesson himself said of his journey that he managed to tame time. The hero of the film, in order to fathom this, has to learn to listen to himself and perceive the beauty in every moment of life. 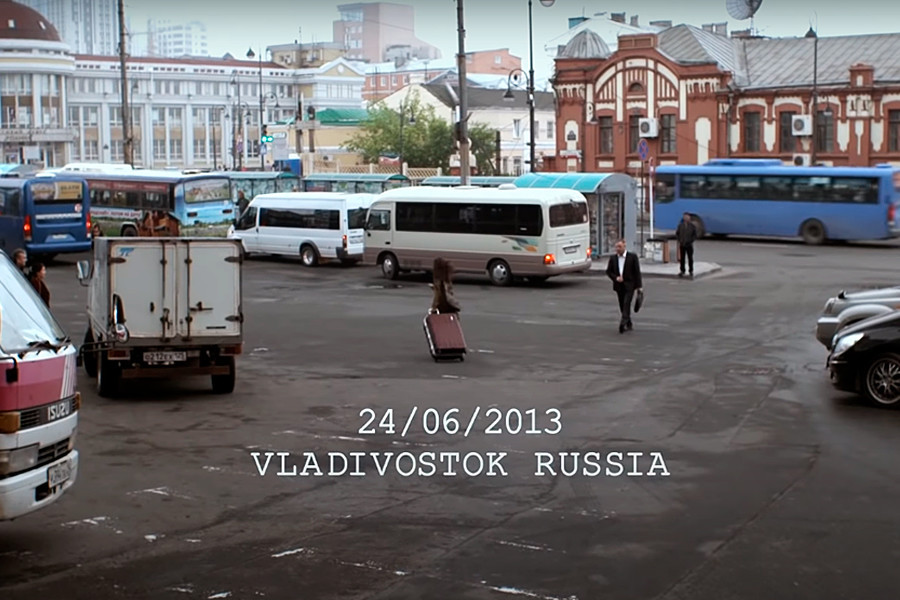 A still from 'Seventh Code'

Kiyoshi Kurosawa’s movie Seventh Code is just one hour long. Half road movie, half thriller, with a twist of comedy, it features spy games, chases through endless Vladivostok yards, and a story about a failed venture (note: selling red caviar and honey to Japan isn’t the best business idea). 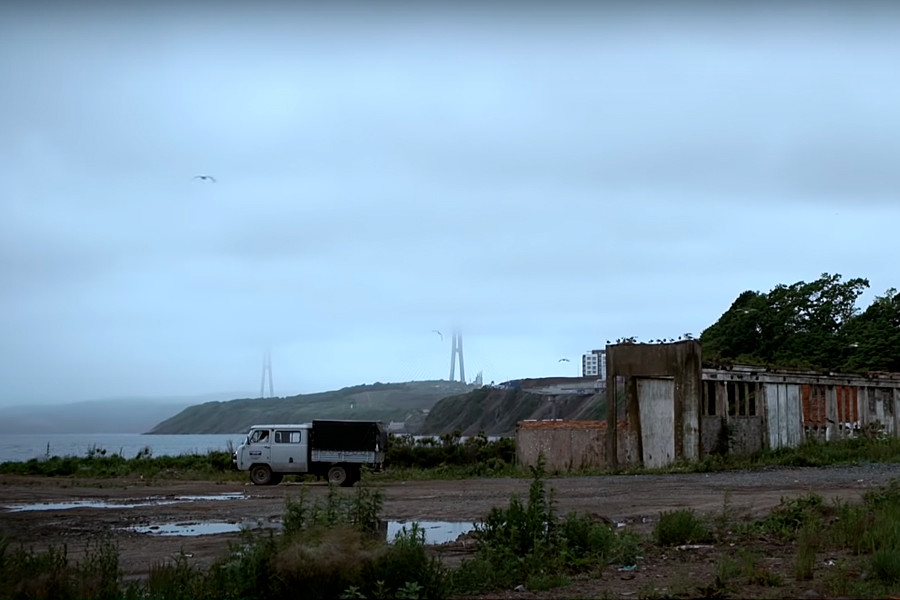 A still from 'Seventh Code'

The city itself plays the role of a jumping-off place, a starting point for a journey to the wider world, leaving behind old Soviet apartment blocks, streets wrapped in creeping fog, and abandoned parks with half-ruined buildings and statues.