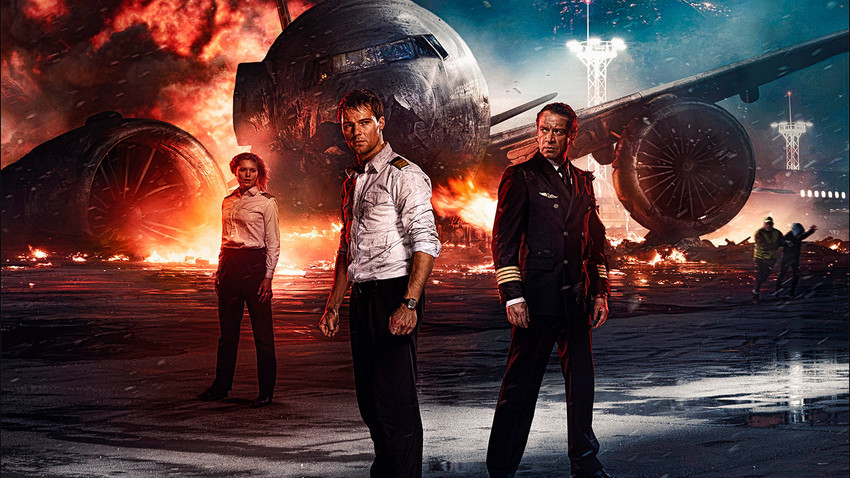 Nikolay Lebedev/TriE, 2016
This is how we feel the last decade will go down in cinema history.

The 2010s gave us many fast-paced sports dramas, often taking viewers back to the Soviet Union. As does Legend #17. It’s the story about legendary hockey player Valery Kharlamov, who scored twice in the first game the Soviet hockey team played against Canada in 1972 and won with a score of 7:3 – a triumph of Soviet sport.

One of the highest grossing films of 2013 in Russia, Legend #17 “keeps viewers attention from the first minute to the last. Not to mention that the film is shot in such a way as if you were watching a real hockey match, shaking with excitement and believing in the victory of our team,” a film critic wrote about the movie.

It’s always intriguing to discover what people talk about behind closed doors. In this comedy, that’s now become a modern classic for many in Russia, four friends talk frankly about their wives, girlfriends, friendship, and life. They daringly speak out what most men think about, but are afraid to talk about in public. The result is a brilliant, funny, and philosophical movie that appeals to both men and women alike.

‘What Do Men Talk About?’ is one of the films produced by famous Moscow-based theater studio ‘Quartet I’. The studio consists of four graduates of the Russian Academy of Theatre Arts who have produced notable shows in the past, many of which have been adopted for the screen. This one, too, was produced after their successful play “Conversations middle-aged men have about women, movies and aluminum forks” appeared on stage. It’s a very funny, yet deeply philosophical road movie.

You wake up and remember nothing. On the positive side of things, you have a beautiful wife next to you who explains you are now a cyborg. Then armed men interfere with your spousal talk and kidnap your wife. You set on an extremely violent and bloody journey to get her back.

‘Hardcore Henry’ is an experimental movie from an acclaimed producer Timur Bekmambetov and the evenly praised young director Ilya Naishuller, where essentially you are playing the hero. Most of the movie is filmed in a first-person point of view (POV). “It's a cross between a theme park ride, a film, a video game and a rock concert,” the film’s director was quoted as saying. And it truly is, as the movie was mostly filmed on GoPro cameras, supported by a custom designed camera rig invented by an extreme cinematographer.

Allegedly, all people on the planet are just six or fewer social connections away from each other. A kid in a Russian orphanage sets out on a mission to test the theory of six handshakes to reach the president and ask him to help his friend Varya. A chain of handshakes takes the viewers throughout the country, where people struggle for happiness, before the clock strikes the New Year.

It’s a kind, inspiring, and fun movie, which is a perfect choice for the family on Christmas and New Year’s Eve. ‘Elki’ was also one of the highest grossing Russian movies in the country in 2010, falling short of only James Cameron’s Avatar and The Twilight Saga.

An air force pilot gets dishonorably discharged for disobeying a direct order. Leaving the air force behind, he becomes a passenger jet pilot. He does so reluctantly, but being in the sky is the only way for him to feel alive. Yet his explosive temper makes it hard for him to get along with the airline’s management. But before quitting, he must compete one last flight. Accidentally, an earthquake on a faraway island changes the direction of his flight - and his life.

This movie is a remake of the classic Soviet film ‘Air Crew’, spiced up with lots of action and modern visual effects. In addition, it’s a very inspiring story: “‘Air Crew’ is a film that can truly inspire and give you power to be brave and do good deeds for other people. In the contemporary world it is a big rarity,” wrote a film critic in her review of the movie.

18th-century explorer Gonathan Green travels from Europe to the East. On the journey, he stumbles upon a village isolated from the rest of the world by impassable forest and an artificially built ditch. Its inhabitants fear evil spirits – a belief educated Green immediately dismisses as nonsense. Yet, he will also fall a victim of the evil…

‘Viy’ is based on a short story by one of Russia’s greatest writers, Nikolay Gogol. Watch it to have a new perspective on classic Russian literature. After the film’s release, it was announced that a $50-million sequel will be produced by Russia and China. Somewhat surprisingly, even Hollywood stars Arnold Schwarzenegger and Jackie Chan featured in the second film.

This epic film follows a Soviet captain and a small squad, who managed to get behind enemy lines and hid in a house where they found its last resident, a young woman named Katya. Together, the small group has to thwart the Nazi offensive while changing the course of the WWII in the process.

‘Stalingrad’ is the first Russian movie filmed in IMAX format. Whole districts of the destroyed city were scrupulously erected on a military field near St. Petersburg. The famous fountain left untouched by the heavy bombings was built there as well. ‘Stalingrad’ ended up being the number one best grossing film of 2013, and truly is epic in its production and delivery.

1972 Summer Olympics. The Soviet basketball team arrives in Munich hoping to beat a seemingly unbreakable U.S. team. Despite the myth of invincibility surrounding the U.S. team, and despite the hostage crisis that breaks out simultaneously, the Soviet coach leads his multiethnic team to the miraculous victory that went down in international sports history.

This final match was reconstructed with a close attention to details: six different camera teams were filming the action independently from each other -- a unique experience for the Russian filmmaking industry. In the words of a film critic, this is not the only unique feature of the movie: “The film captivates, entertains, and teaches. It also walks a fine line between irresponsible glorification of the USSR and denigration of our former country.”

A corrupt city mayor uses his power to push a simple man from his home by the seaside and use the land for his personal needs. The poor but proud man won’t give in to the mayor’s pressure and hires a layer from Moscow. But when the help he was waiting for arrives, it becomes a source of pain in its own right.

This film by acclaimed director Andrey Zvyagintsev was praised throughout the world and received a Golden Globe Award in 2015. Reviews by critics, both in Russia and abroad, were overwhelmingly positive (98% of all reviews collected by Rotten Tomatoes website). The Sunday Morning Herald dubbed it: “A brutal Russian masterpiece”..

On June 22, 1941, Nazi Germany launched a massive offensive aganinst the Soviet Union that was not ready for the strike, neither prepared for the unfolding war. The Brest Fortress was the first outpost that saw the fierce attack of the Nazis. Taken by surprise, ordinary people had to make an extraordinary effort to thwart off the aggressor.

Although critics did not favour ‘Fortress of War’, the film earned one of the highest ratings among Russian war films on Kinopoisk, a Russian ratings website similar to IMDb or Rotten Tomatoes. The answer may lie in the sentiments many Russians have regarding the war. Watch it for the terrifying first hand experience of what the beginning of WWII was for most Russians.

A talented paramedic gives all his attention to his patients, brushing his wife, family, and management aside. But it doesn’t work out well for him: his wife files for divorce and troubles arise at work. His life falls apart, yet his patients won’t even thank him for his work.

This widely praised drama about a simple man who does his work despite countless obstacles in many respects reflects the way Russian society works. And this is a strangely uplifting experience. As one film critic put it: “You believe in the film. You want to fix life and not run away from the country where ‘nothing good can ever happen’.”

The film depicts the daily life of Sergey Dovlatov, one of the most popular Russian writers of the late 20th century, in Leningrad in the 1970s, just before his friend Joseph Brodsky was expelled from the Soviet Union.

This film, at times funny and at times dramatic, shows the viewers how hard it can be for a person to discover his talent and find his place in life. It was awarded a Silver Bear at the Berlin International Film Festival in 2018.

A family of three is going through a painful divorce. The wife and husband are always on the verge of a war, yet the real victim is their son Alexey. After yet another row, Alexey disappears without a trace.

This dark and sulky drama directed by Andrey Zvyagintsev - a Golden Lion prizewinner at the Venice Film Festival for his drama ‘The Return’ - was nominated for an Academy Award for Best Picture in a Foreign Language in 2018. It also earned overwhelmingly positive reviews in the Western press.

‘Loveless’ can be a harsh experience to sit through, however. As one film critic put it: “It's a kind of thriller, but without an easy resolution. Zvyagintsev does not deal in reassurance: there is none to be had in this cold, hard place.”

A teenager from a broken home seeks salvation in the Bible. He learns the verses by heart and recites them to his fellow classmates. He comes to think of himself as the ultimate moral authority and condemns vices whenever he sees them. For others, the teenage preacher becomes an unbearable problem.

15. How Viktor “the Garlic” took Alexey “the Stud” to the Nursing Home

A cunning young man wants to lock his newly discovered father - who is a jailbird - in a nursing home and inherit his apartment, so that he can break away from his family and move in with his mistress. Neither of the two men is fond of each other’s company, but they embark on a journey through the Russian periphery, anyway.

A recent graduate of film school, Alexander Khant debuted with this typical indie road movie and made quite an impression, despite a very limited budget and received a very warm reception from the public. Critics also praised the director for a highly authentic depiction of the Russian periphery and his conscious choice to avoid moralizing the viewers, despite the film’s deep and thought-provoking storyline.

Click here to see the top 100 Russian and Soviet films of all time.