25 must-see masterpieces of the Russian Museum 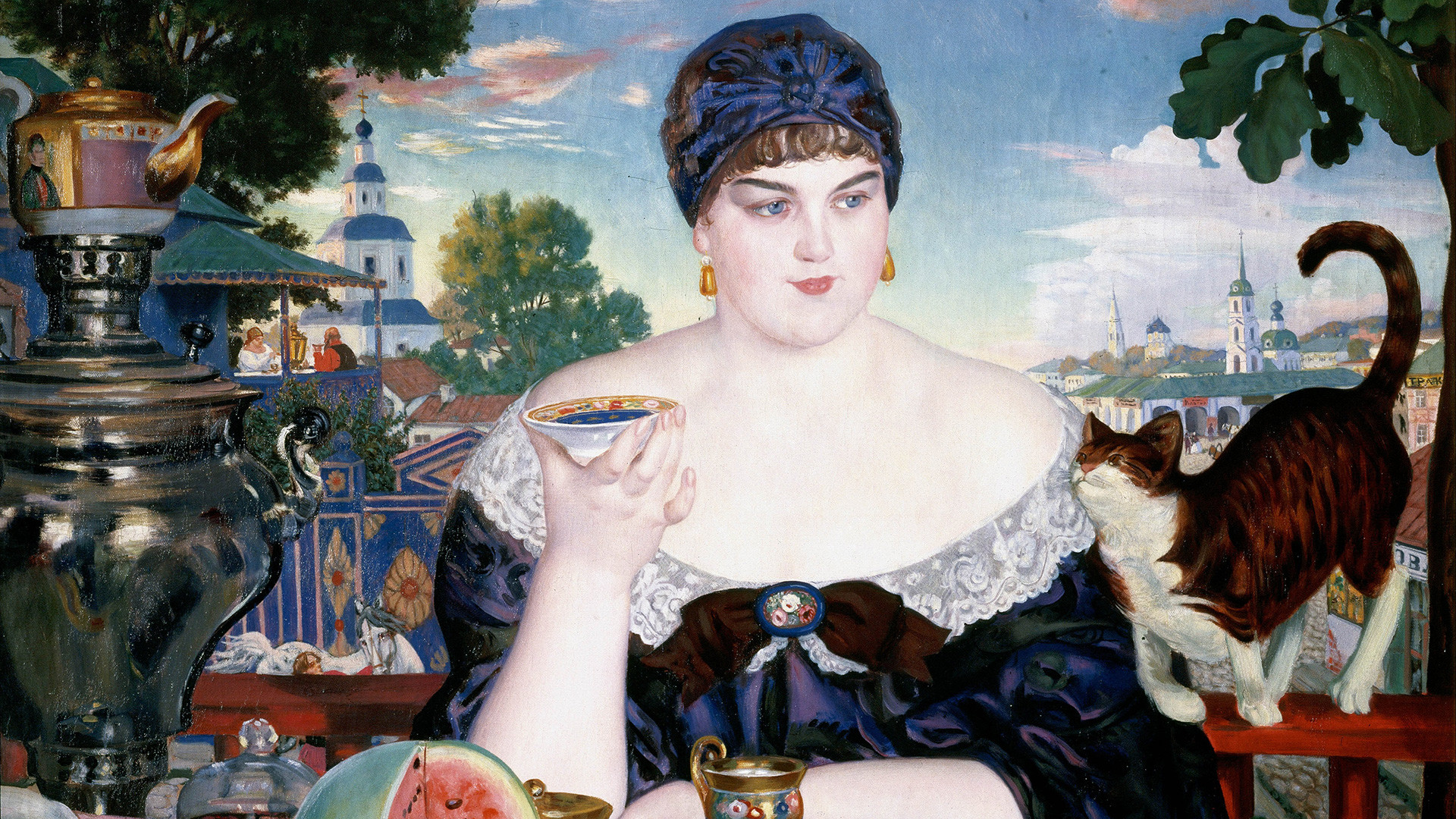 Russian museum
Unfairly overshadowed by the more illustrious Hermitage, the Russian Museum houses a magnificent collection of Russian art, the largest in the world. We have selected its top paintings, which would be the envy of even the Tretyakov Gallery.

The museum was founded in 1895 by imperial decree of Tsar Nicholas II. Initially, he instructed that it be called the Russian Museum of Emperor Alexander III, in honor of his late father.

The collection initially consisted of paintings transferred from the Hermitage and the Imperial Academy of Arts, as well as from out-of-town tsarist residences. After the 1917 Revolution, many newly nationalized artworks were moved here. Today, its depositary contains more than 400,000 pieces, ranging from ancient Russian icons and avant-garde to socialist realism and modern art. Here are just a few of the museum's myriad treasures. 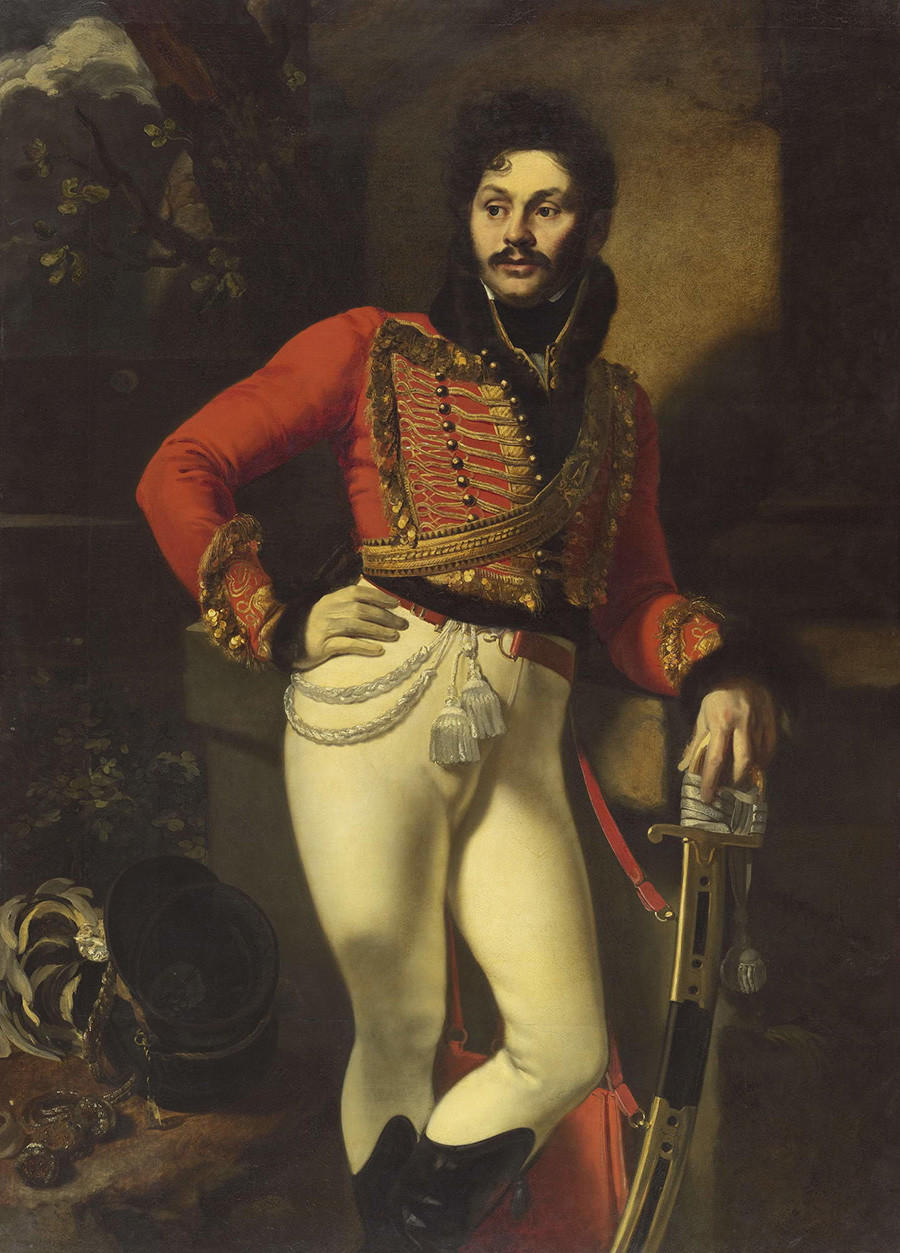 Kiprensky is known as a portrait painter, especially for his emblematic image of poet Alexander Pushkin. However, his most famous painting in the Russian Museum is a portrait of a hussar, a hero of the 1812 Patriotic War against Napoleon. 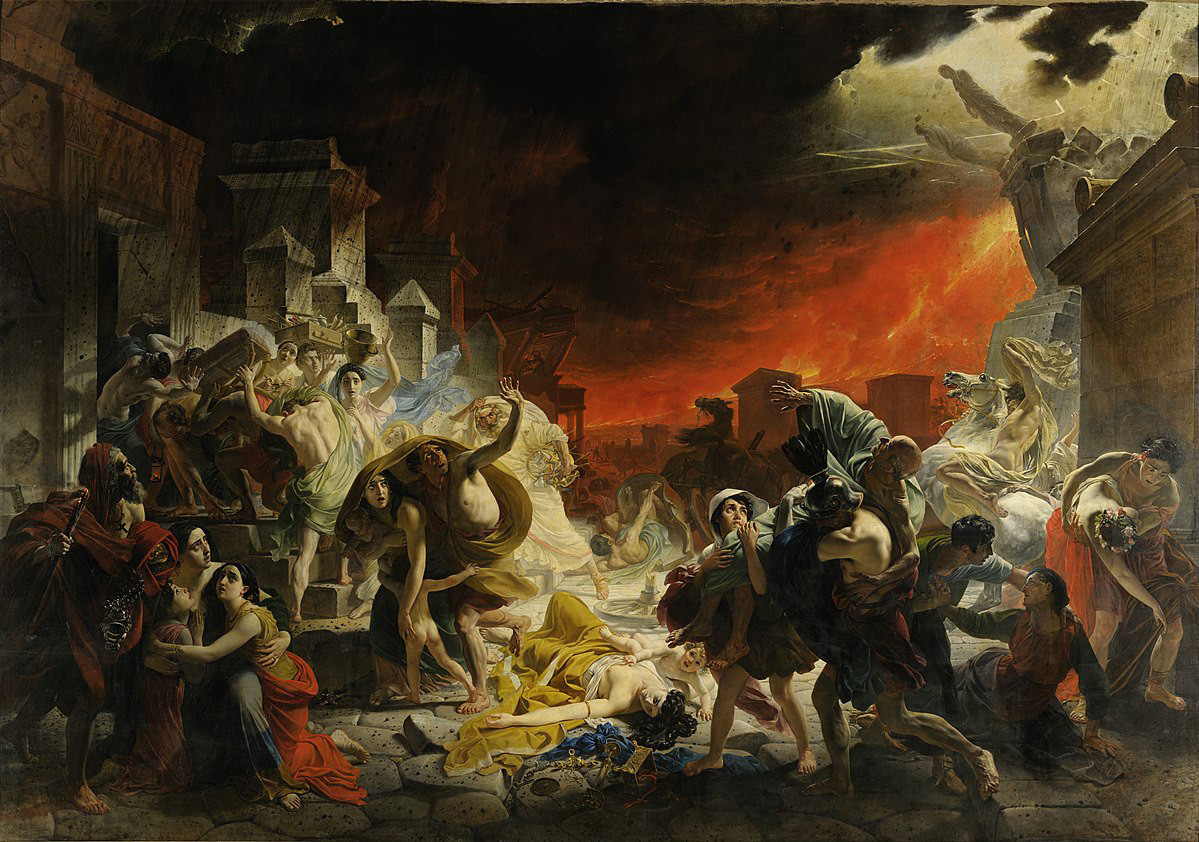 The artist worked on this painting in Italy for about six years, visiting the archaeological site of Pompeii itself. The canvas (measuring 4.5x6.5 meters) was exhibited first in Milan, then in the Hermitage. The stampede of people running in horror from the erupting Mount Vesuvius made an indelible impression on the public. It was transferred to the Russian Museum specially for its opening in 1897. 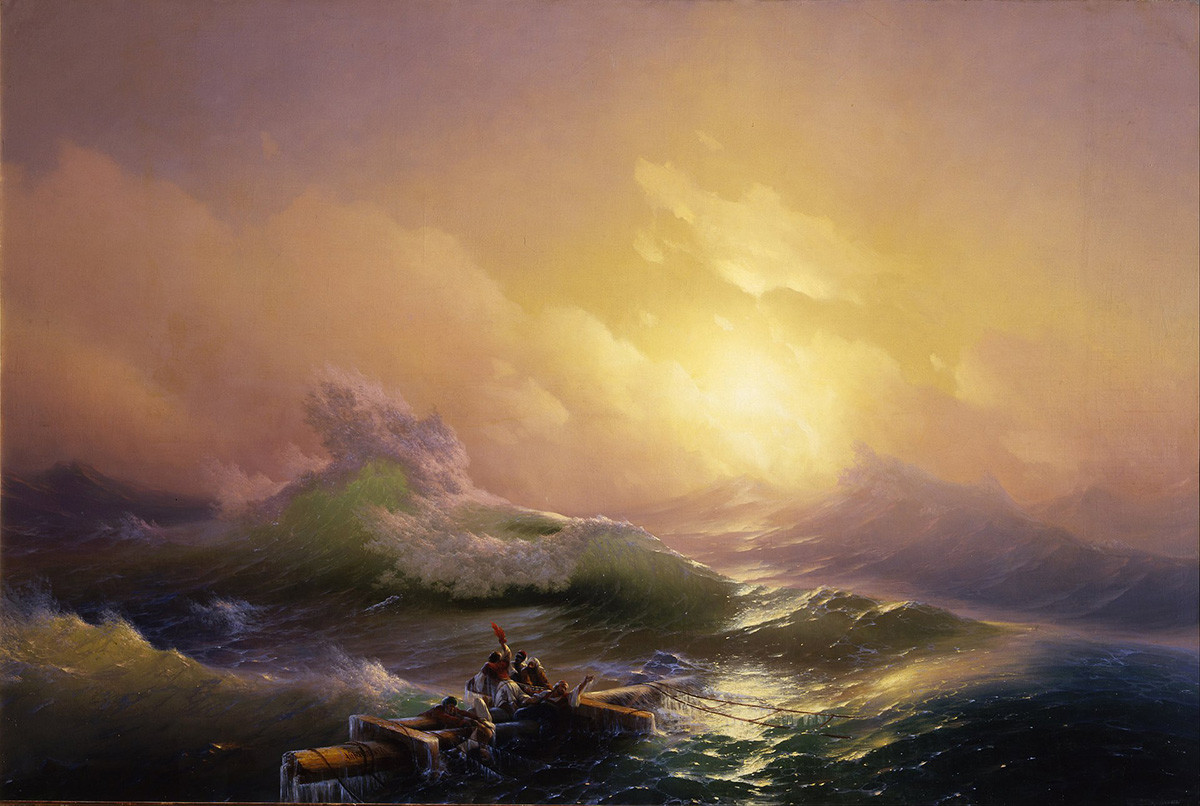 This painting by the great seascape artist Aivazovsky is familiar to every Russian schoolchild. The 2x3-meter canvas depicts shipwrecked survivors who will either be engulfed by another huge wave or rescued by divine intervention (the cross-shaped debris is believed to be a Christian metaphor). It too came to the museum in 1897 from the Hermitage.

One of the most famous works by the Itinerant artist Repin shows the wretched existence of the common folk. The painting journeyed to the 1873 World Fair in Vienna, and was later procured by a member of the imperial family. 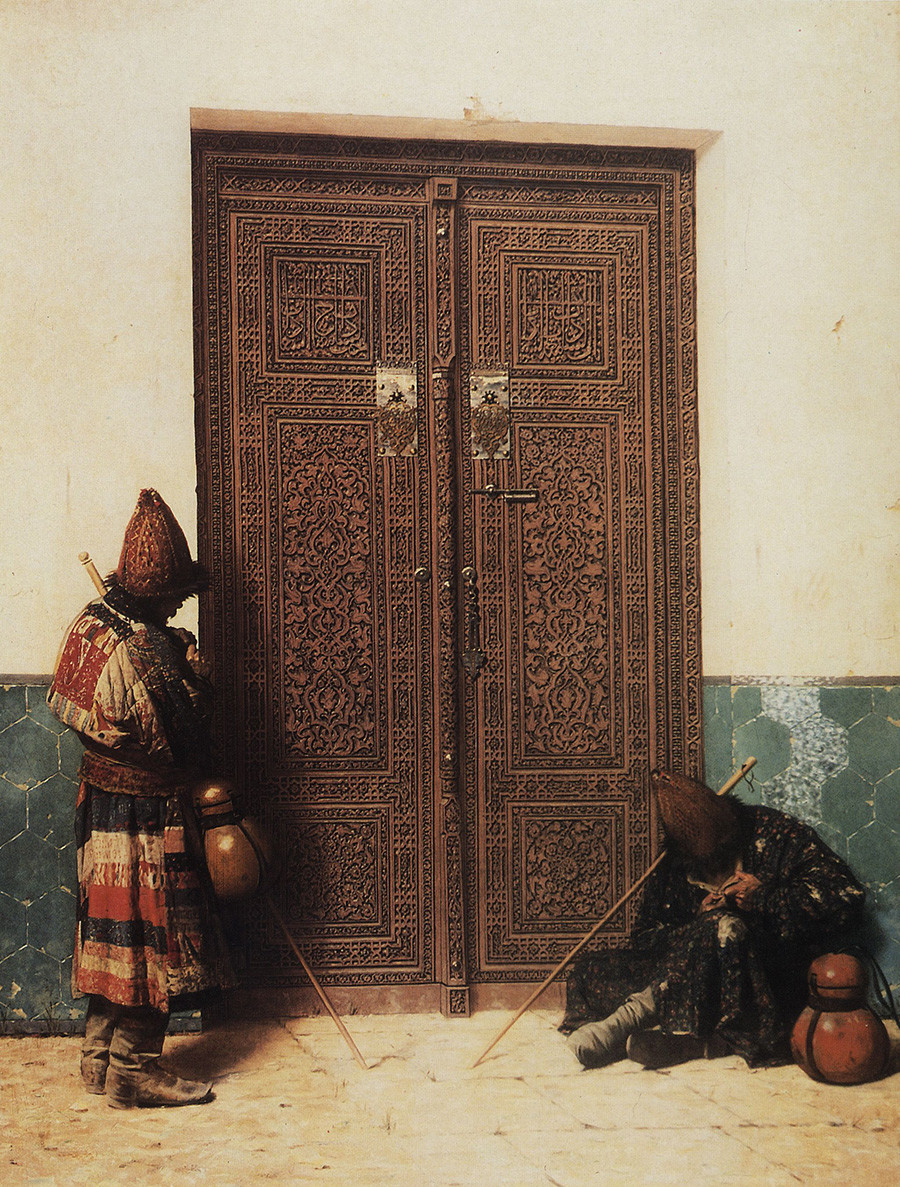 Vereshchagin was a military man who traveled extensively in Central Asia, where he painted his Turkestan Series. Most of these works, including the masterpiece The Apotheosis of War, are with the Tretyakov Gallery in Moscow, but a veritable gem of the Russian Museum is At the Door of a Mosque. 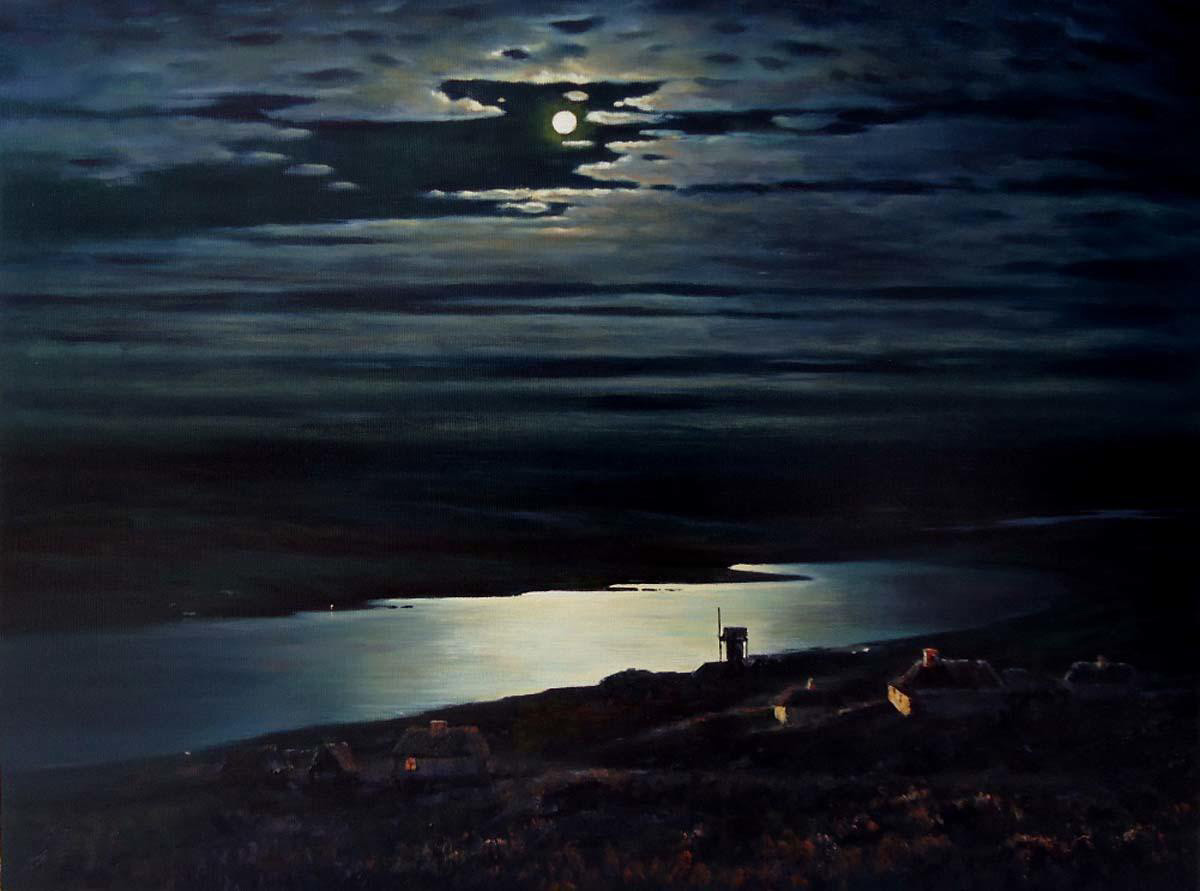 A master of light, Kuindzhi long sought an artistic solution to do justice to the mighty Dnieper. The moonlit path on the night river has what can only be described as a phosphoric glow. The canvas was bought in unfinished form by a Romanov grand duke, and formed the centerpiece of Russia’s first ever one-painting exhibition.

7. Viktor Vasnetsov. Knight at the Crossroads. 1882 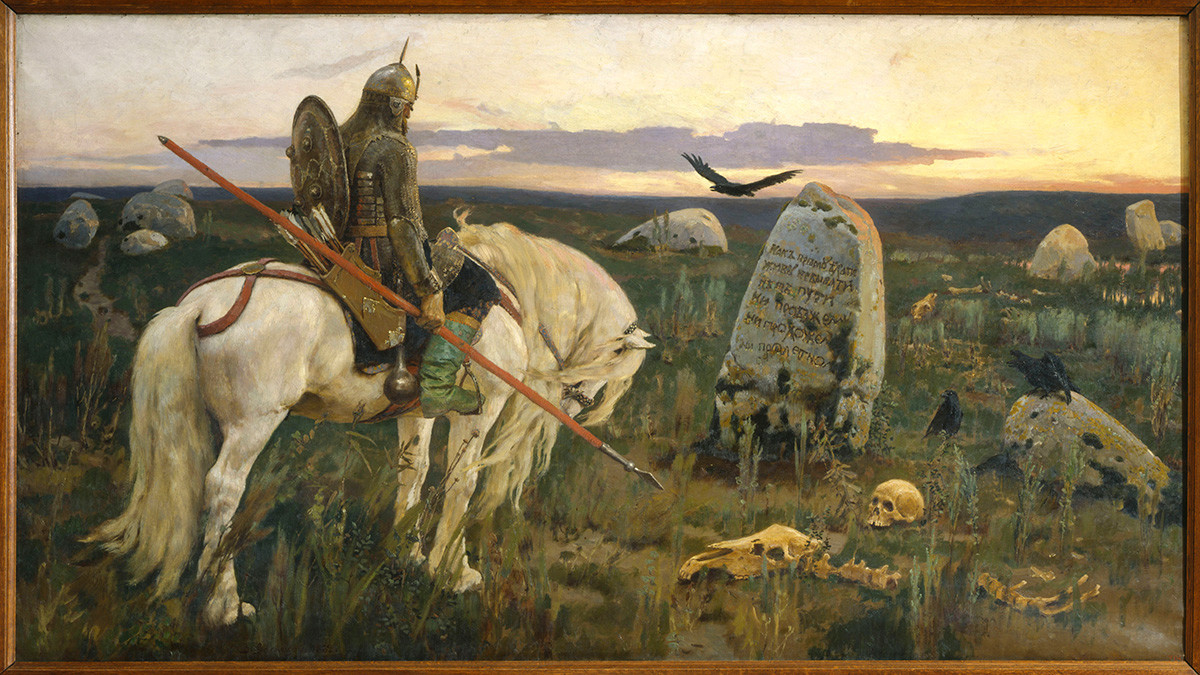 Vasnetsov was fascinated by Russian folklore heroes. The Tretyakov Gallery contains his famous painting Bogatyrs. On this canvas, the doleful knight cannot decide which way to go, for the stone inscription foretells only death whichever path is taken. For more folkloric paintings by Vasnetsov, see here. 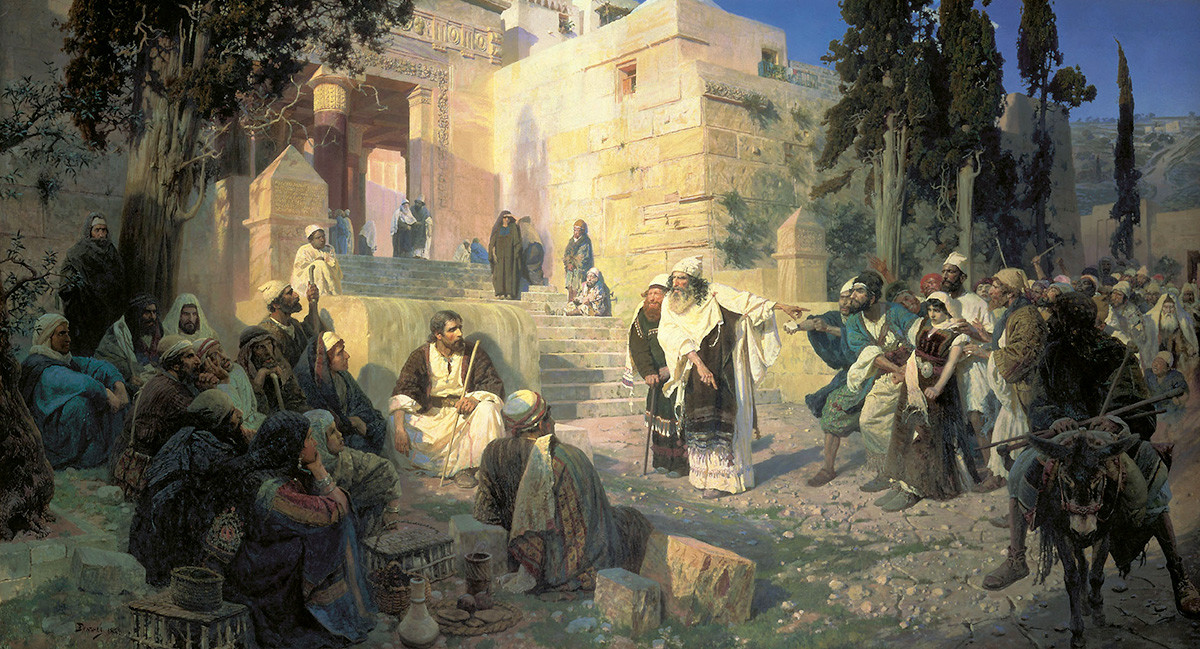 To paint this picture, the artist traveled to Palestine and Syria, where he produced many sketches of faces, landscapes and buildings. The 3x6-meter painting was personally purchased by Alexander III and kept in the Hermitage, before being transferred to the Russian Museum in 1897. 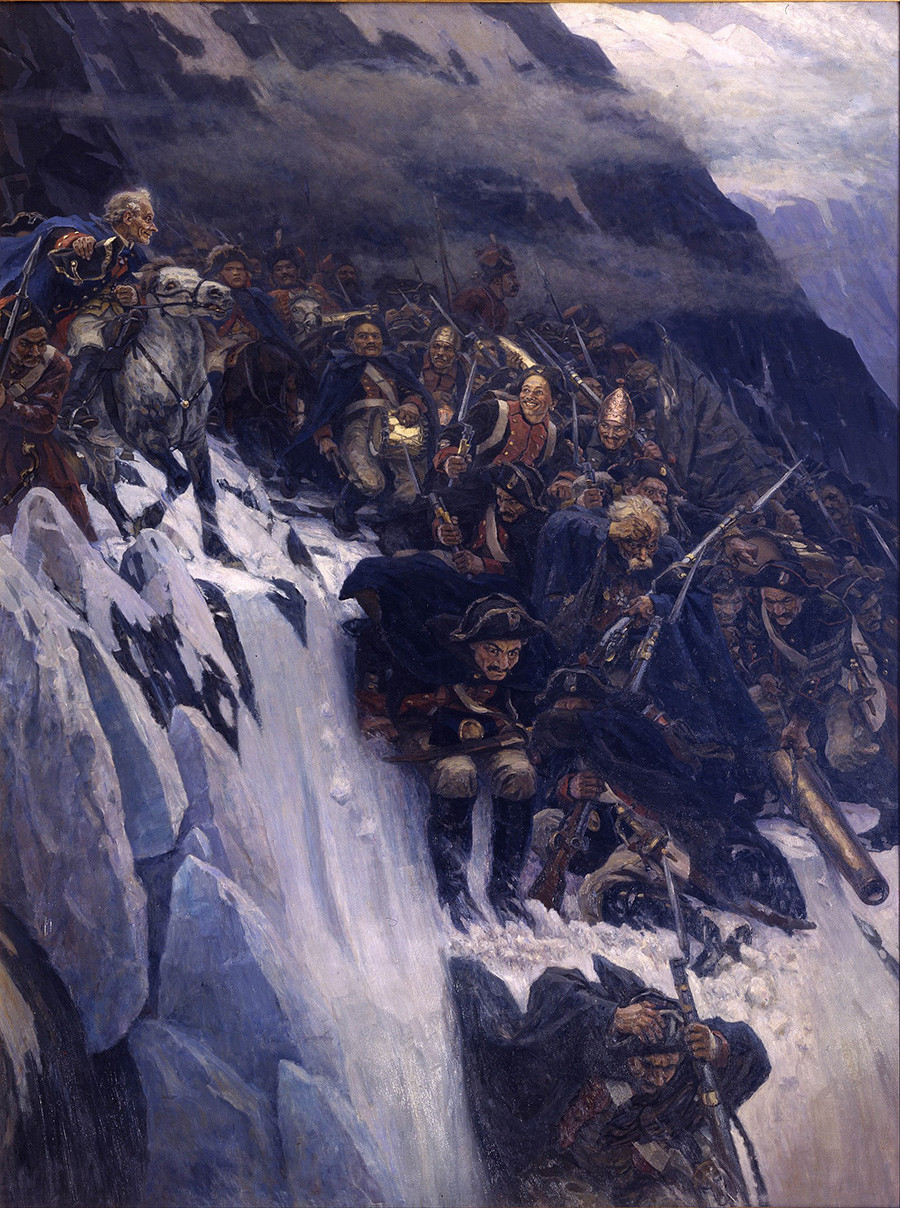 Surikov is famous for his historical paintings. His large-scale Boyarynya Morozova graces the halls of the Tretyakov Gallery, and this 5x4-meter tour de force occupies an entire wall in the Russian Museum. The subject is drawn from the history of the Russian army's Swiss campaign against France under the leadership of its commander, Alexander Suvorov.

10. Ilya Repin. Reply of the Zaporozhian Cossacks to Sultan Mehmed IV of the Ottoman Empire. 1880-1891 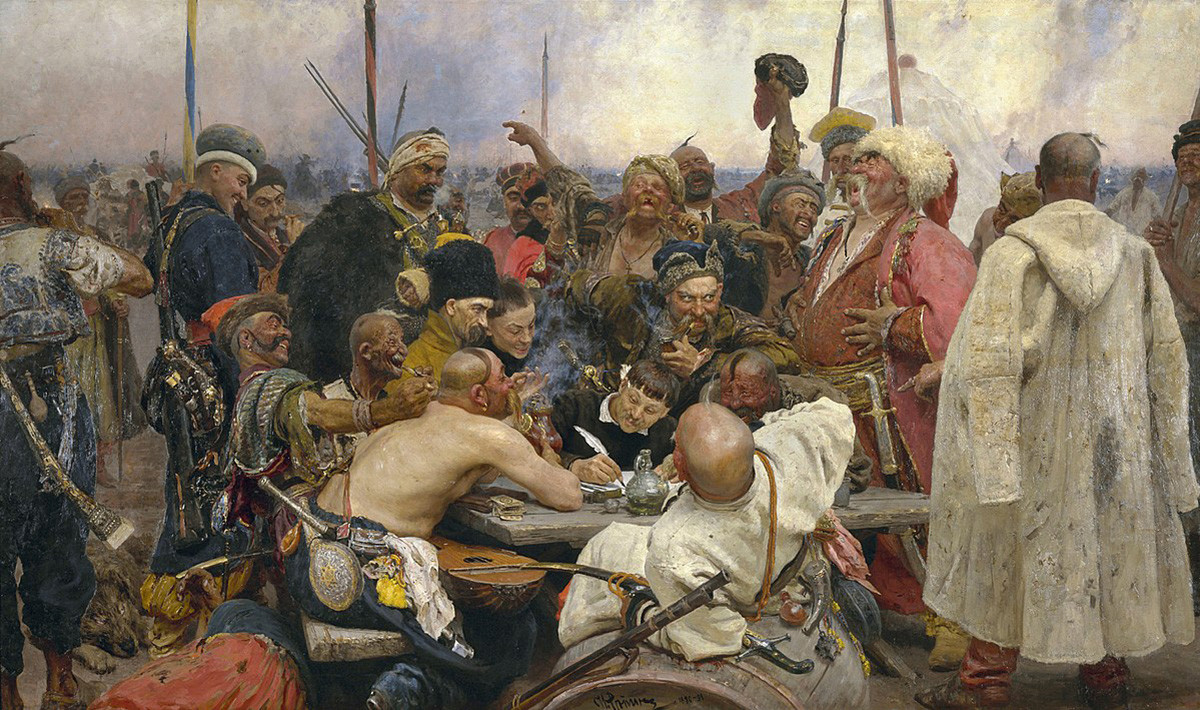 Also known as Cossacks of Saporog Are Drafting a Manifesto, the work depicts the carefree attitude of the largely autonomous Cossacks. In 1675, the Turkish sultan wrote them a belittling letter demanding their immediate surrender. Instead, they composed a stinging response. Bought by Alexander III, the painting was later moved to the Russian Museum from the Winter Palace. 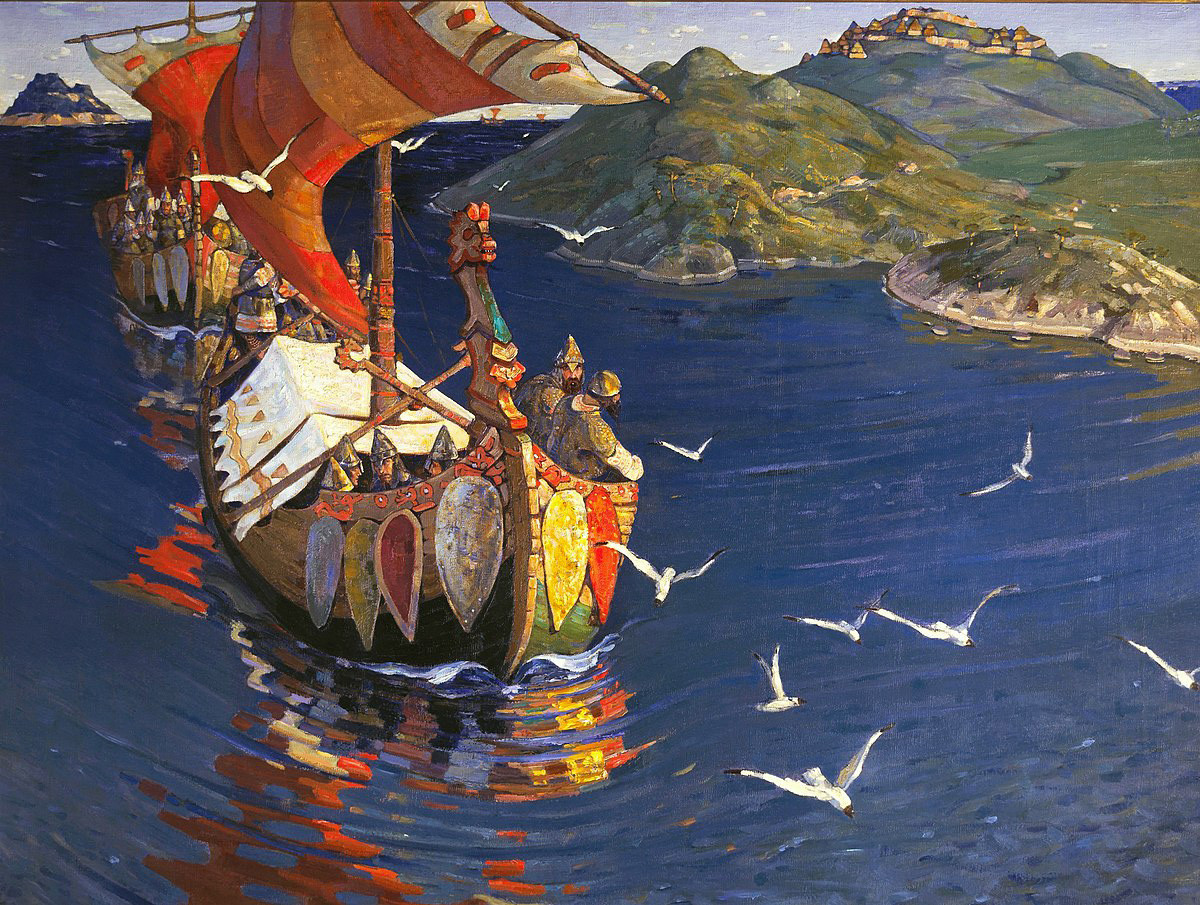 Roerich, known worldwide for his Himalayan landscapes, also created paintings on folk subjects. This canvas depicts the Varangians (Vikings), who, according to legend, were called upon by the warring Slavic tribes in Russia to govern over them. The painting was bought by Nicholas II. Another version is housed in the Tretyakov Gallery. 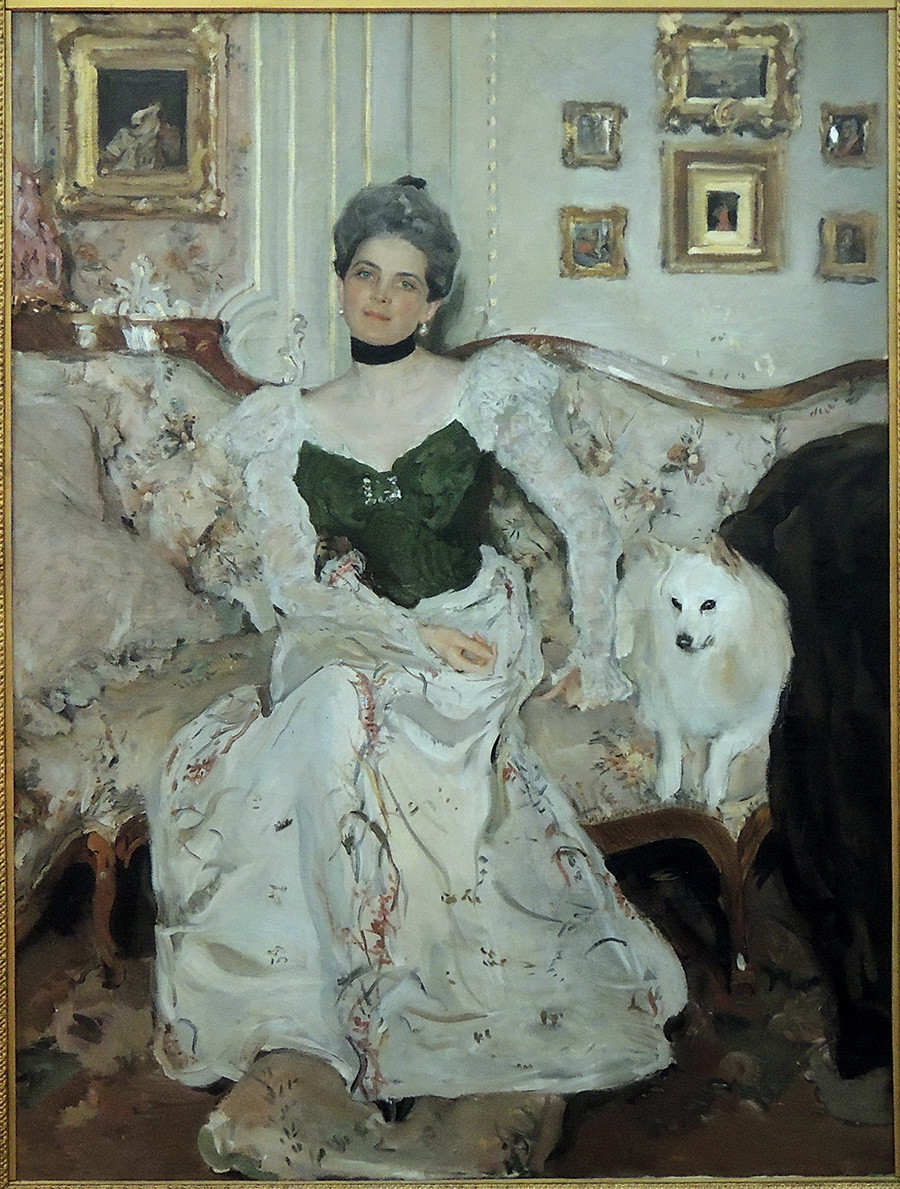 The author of the famous Girl with Peaches in the Tretyakov Gallery was a popular portraitist who painted many courtiers and even Nicholas II himself. Zinaida Yusupova was one of the most fashionable ladies of the day, who came from an immensely wealthy ancient princely family. The portrait required around 80 sittings at the Yusupovs’ Moika Palace in St. Petersburg, and provoked a good deal of controversy: many criticized it for the supposedly unnatural pose and poor composition. But Serov himself considered it a success, and was especially proud of how he captured the shadow of the smile of this grand dame.

13. Ilya Repin. Ceremonial Sitting of the State Council on 7 May 1901 Marking the Centenary of its Foundation. 1903

This monumental canvas, measuring 4x8.7 meters, was commissioned by Nicholas II. The artist worked on it for three years, with each member of the Council posing individually for their portrait. Repin had problems with his hand, so he was assisted by artists Ivan Kulikov and Boris Kustodiev. 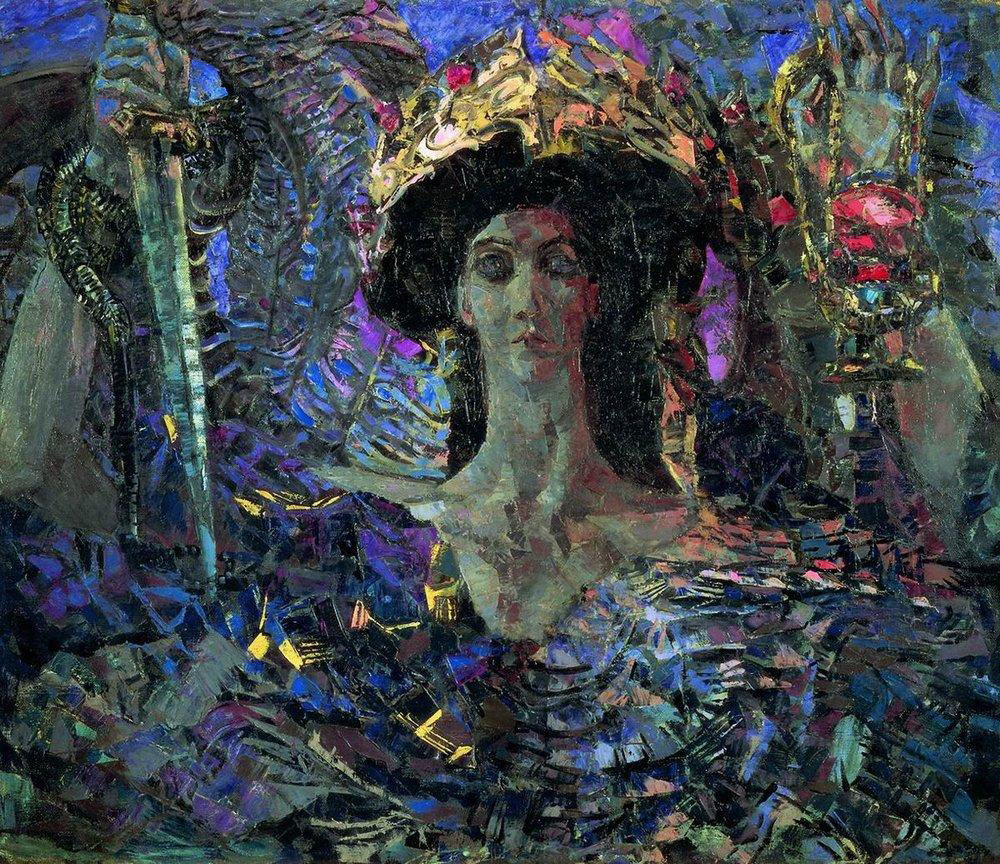 The Tretyakov Gallery features a whole room dedicated to Vrubel, filled with his demons and mystical creatures. The Russian Museum, too, boasts several of his symbolist masterpieces. The picture can be considered an illustration to Pushkin's poem The Prophet. When painting this somber work, Vrubel was in severe depression and suffering from hallucinations. 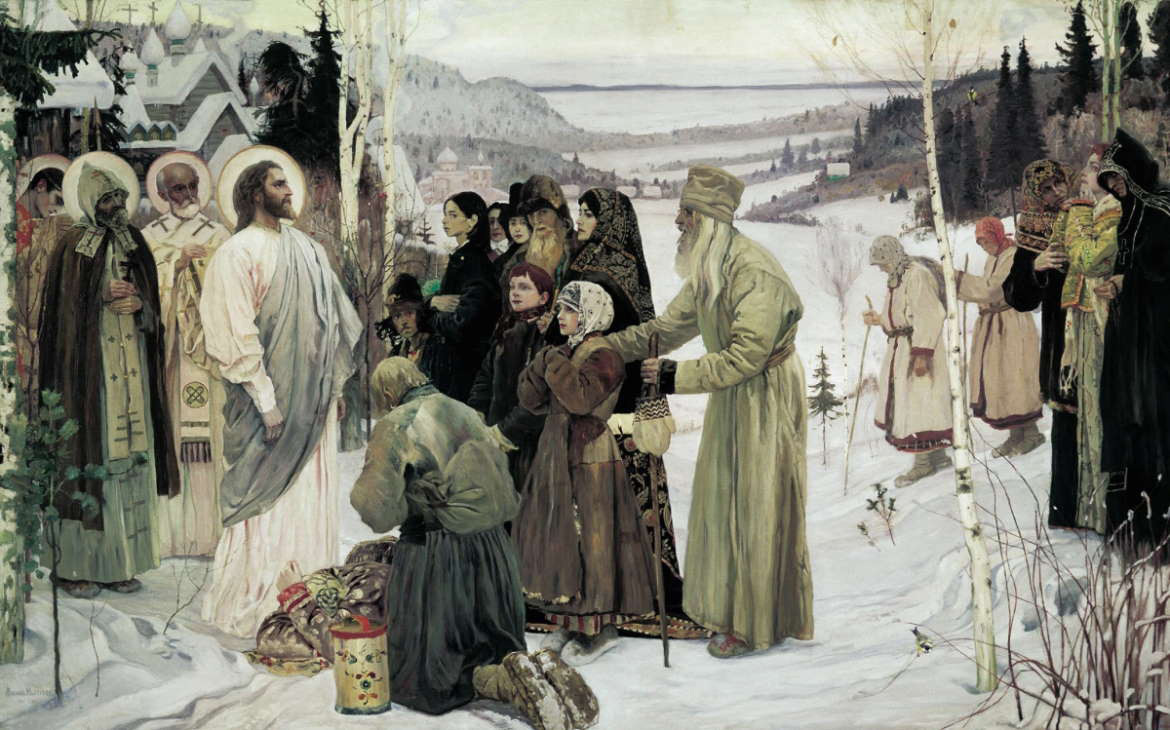 Nesterov devoted more than 20 years of his life to painting religious themes and places of worship. The artist sought the key to the Russian soul, and many of his works depict priests and monks against the backdrop of an unprepossessing Russian landscape. Nesterov himself considered Holy Russia to be the pinnacle of his religious painting. 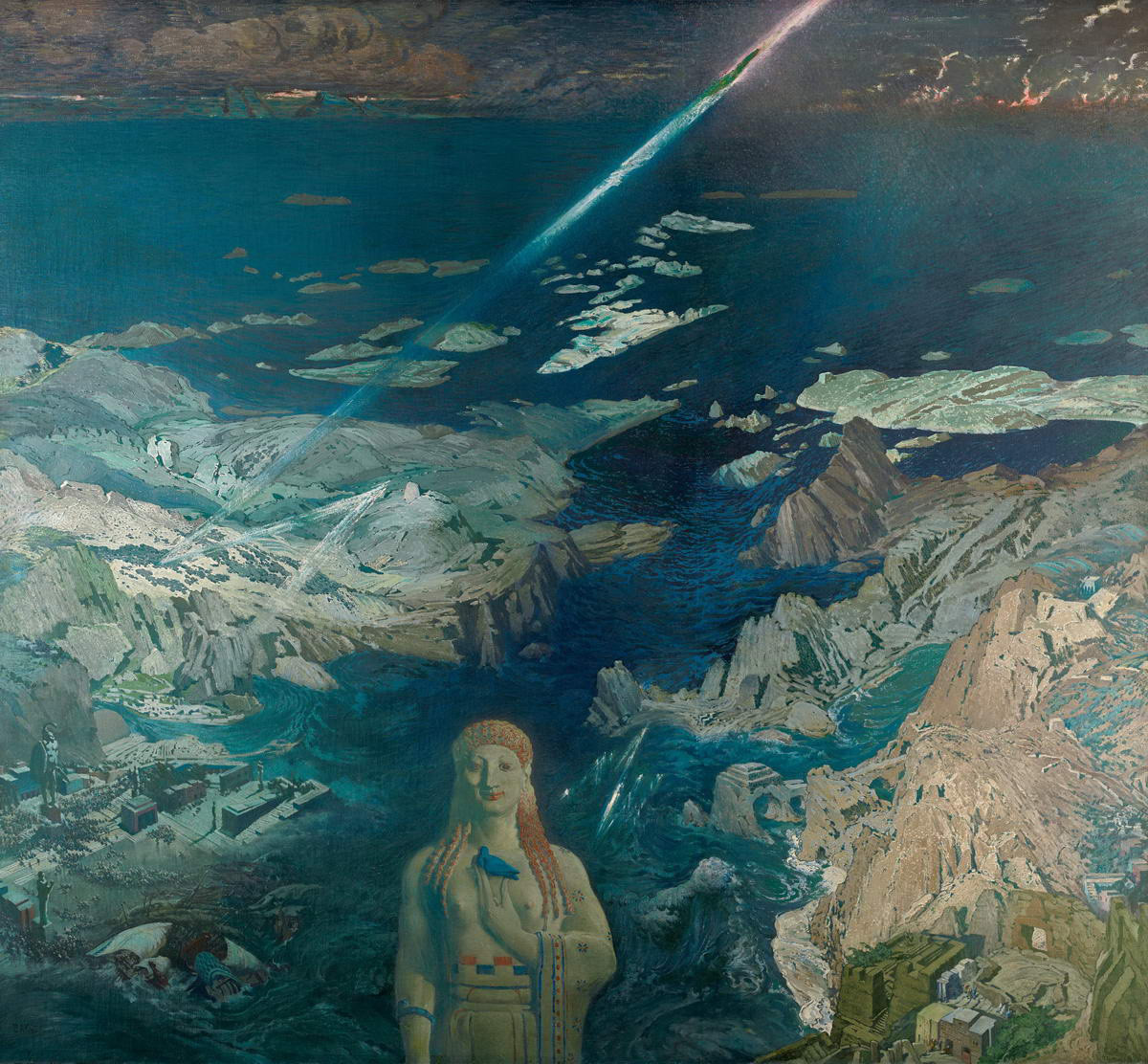 Léon Bakst was famous the world over for his work as a theater artist with Sergei Diaghilev's Ballets Russes company. He was also a successful and highly productive book illustrator. Terror Antiquus was an attempt by Bakst to reflect the apocalyptic mindset that was gripping society in the early 20th century. 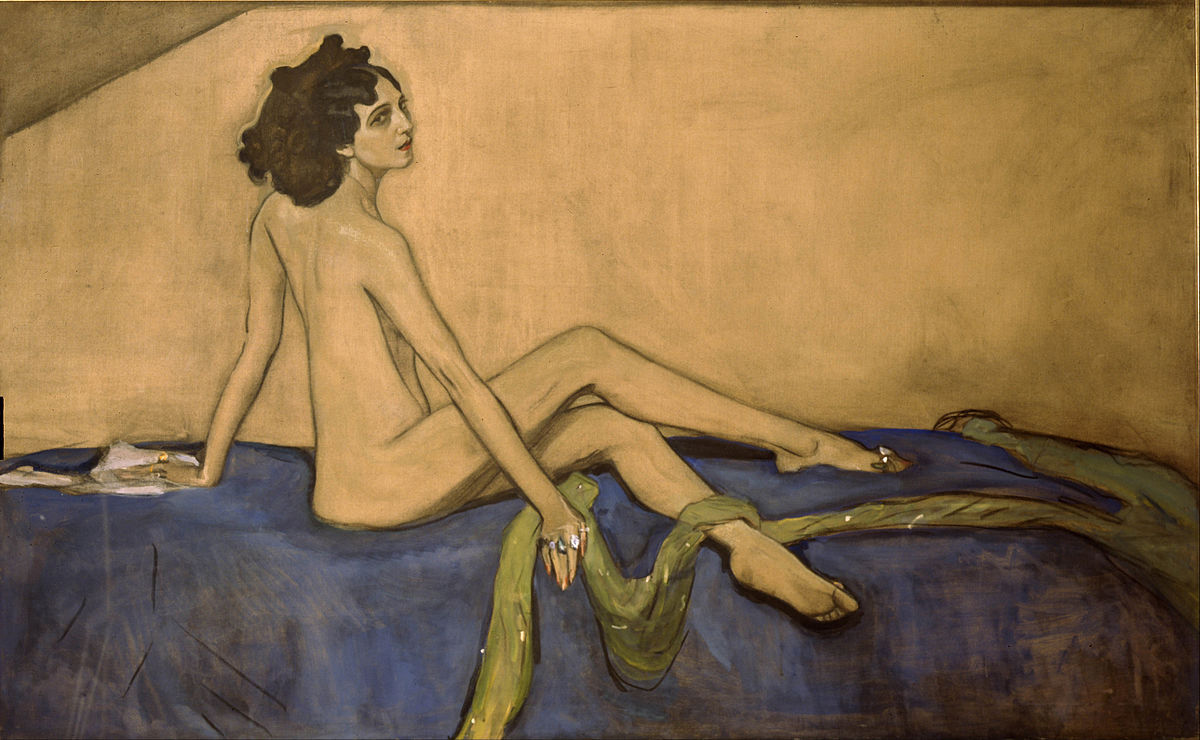 This portrait is a striking example of Russian Art Nouveau. Serov painted the notorious dancer, who starred in the ballet Scheherazade, staged by Diaghilev's Ballets Russes. 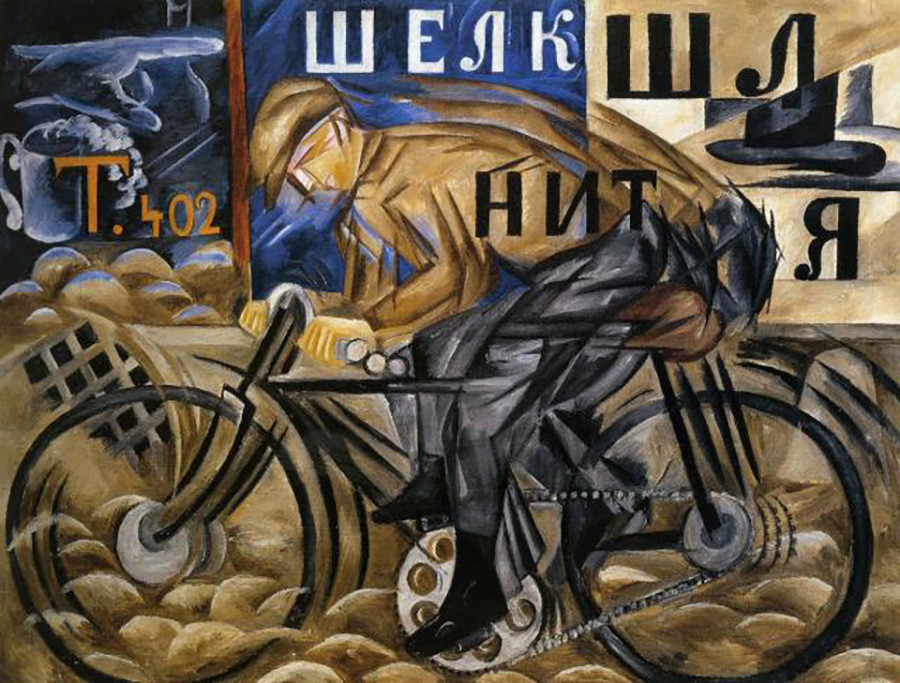 The High Priestess of the Russian avant-garde, who spent many years in Paris, was enamored of different trends in painting, from Impressionism to Fauvism to Cubism. The Cyclist is one of the most vivid works of Russian futurism. 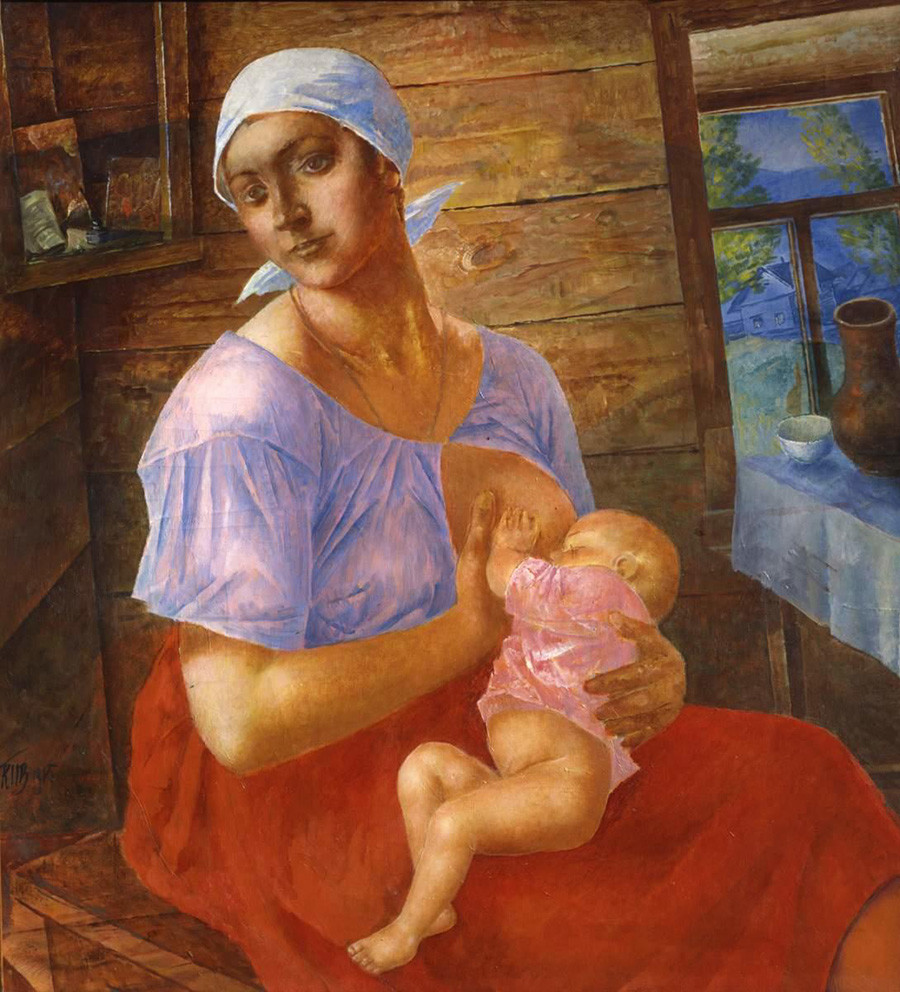 The works of avant-gardist Petrov-Vodkin have their roots in icon painting, while reflecting scenes from the lives of ordinary folk. In this work, the reference to the Virgin Mary, coupled with revolutionary motifs, is obvious. 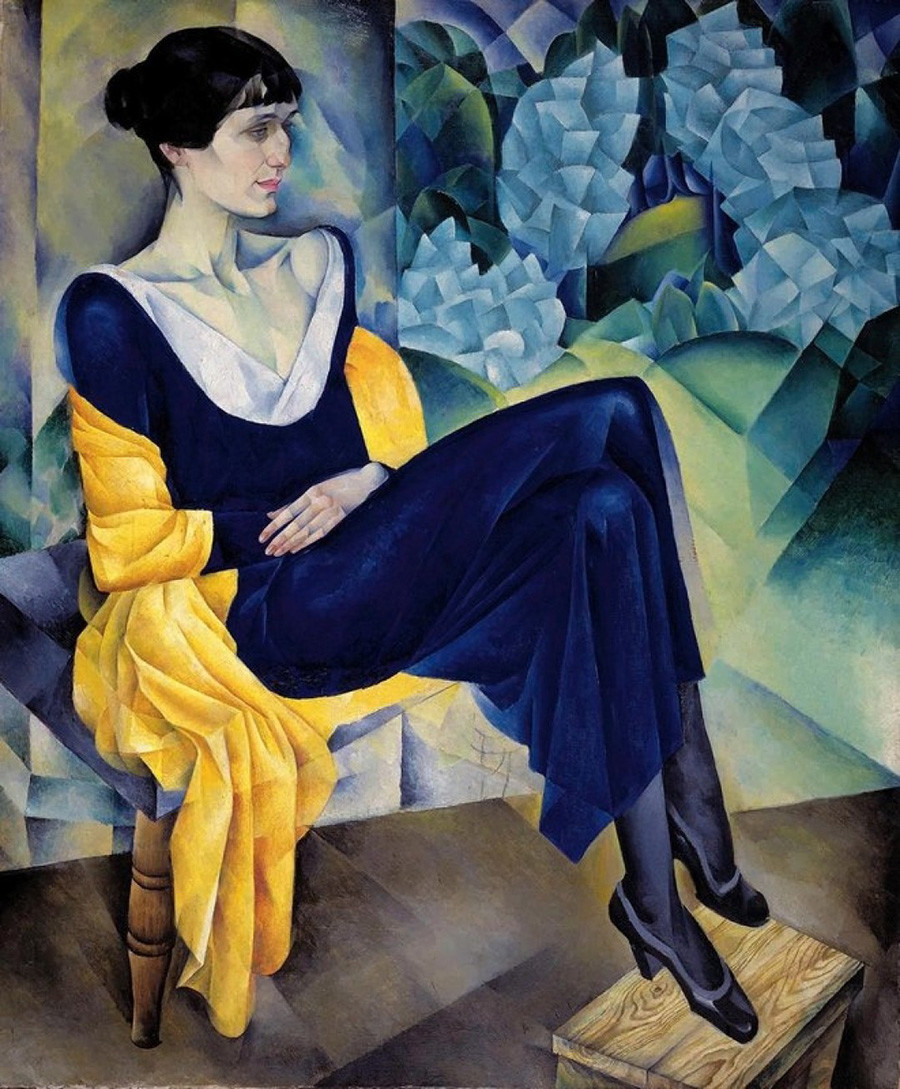 The subject herself, Anna Akhmatova, said of this Cubist-style work: "Like I’m peering into a mirror." It is one of the most famous portraits of arguably Russia’s greatest poet of the 20th century. 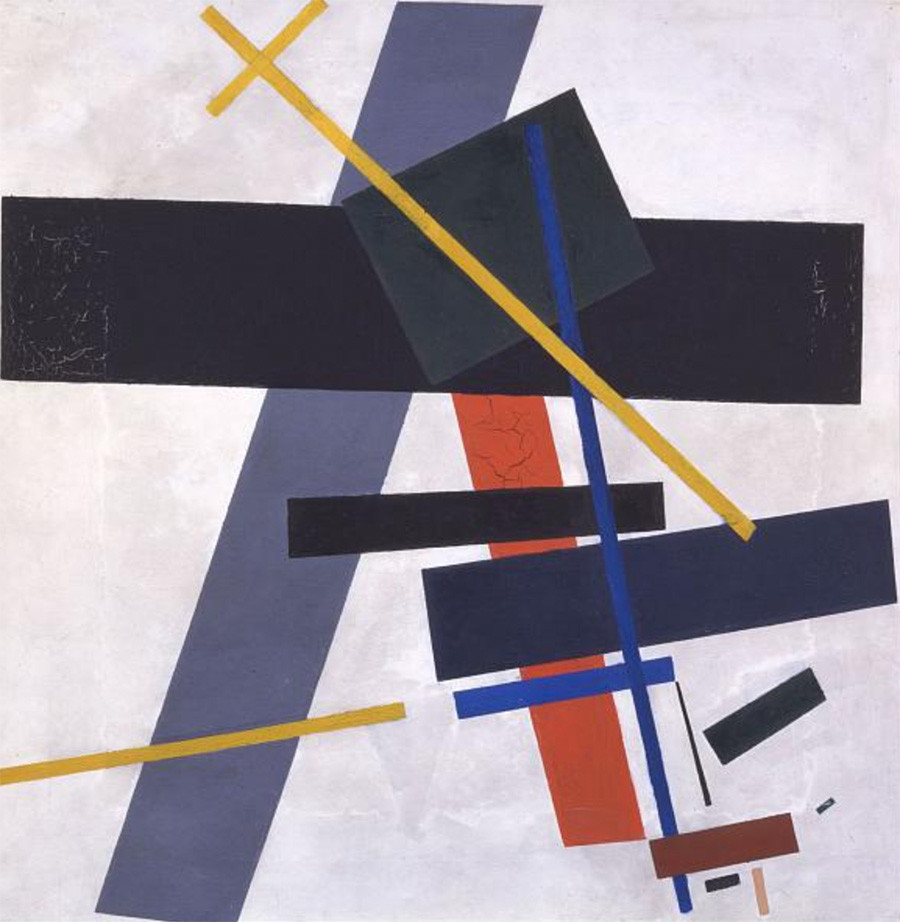 The Russian Museum houses its own version of the famous Black Square; this work is the quintessence of Malevich's suprematist art theory. 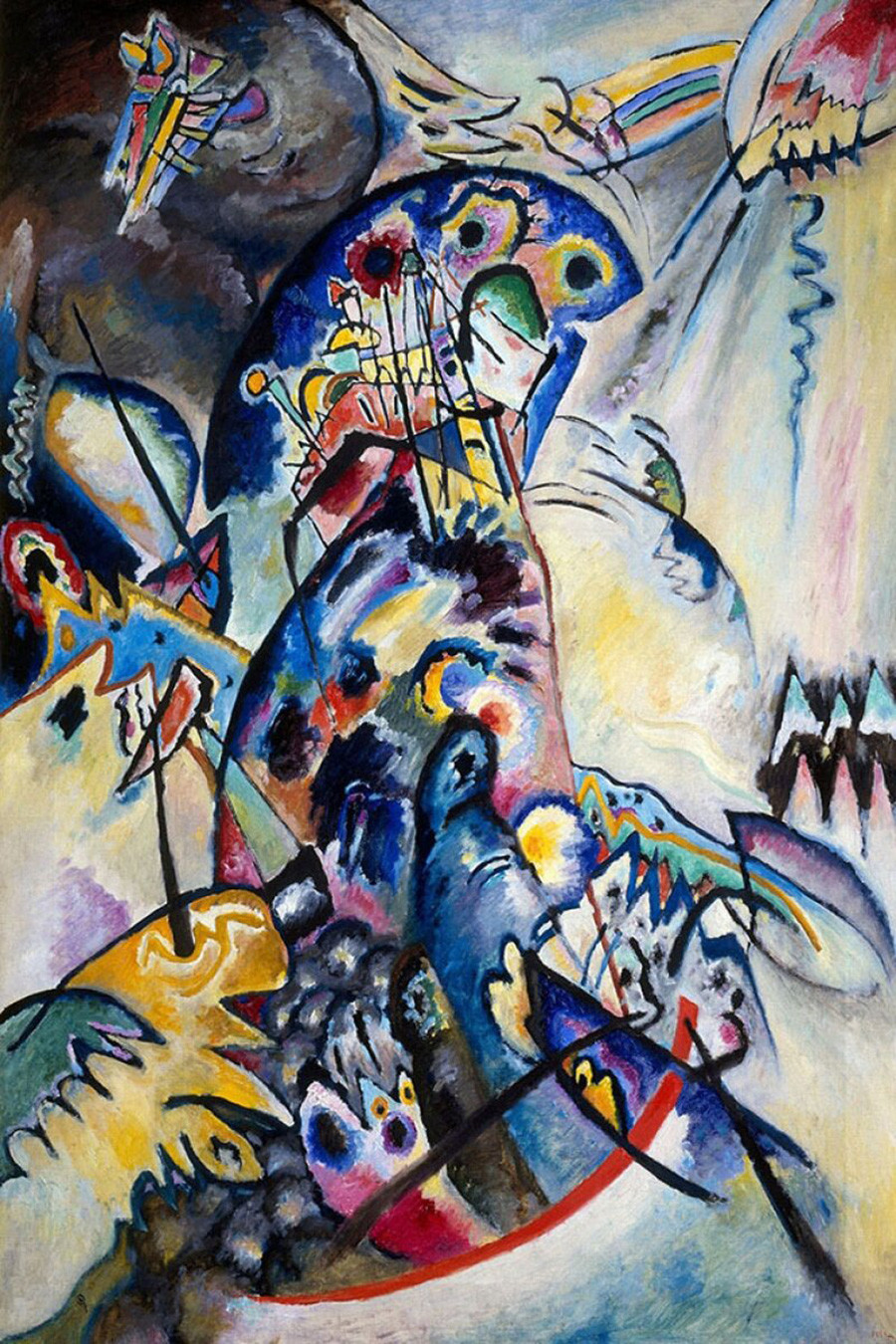 This work is a manifesto of "absolute painting" and freedom of artistic conception. The museum contains more than 20 early works by this renowned abstractionist, produced even before he left Russia for Germany. 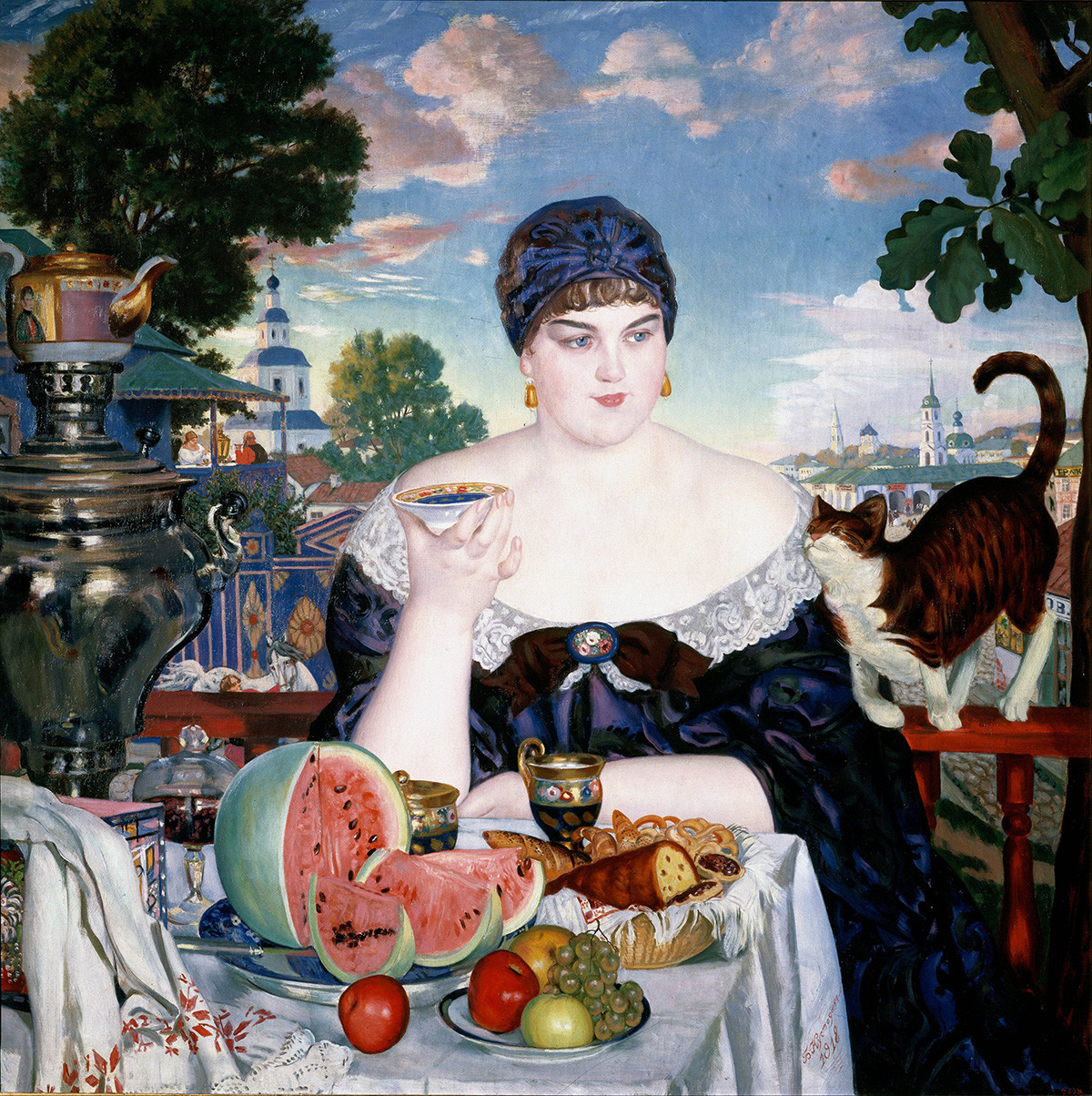 Kustodiev is a troubadour of merchant life and the ornamented Russian style that became popular at the turn of the 20th century. Folk festivities, Shrovetide and merry-making are the distinctive traits of his artistic language. 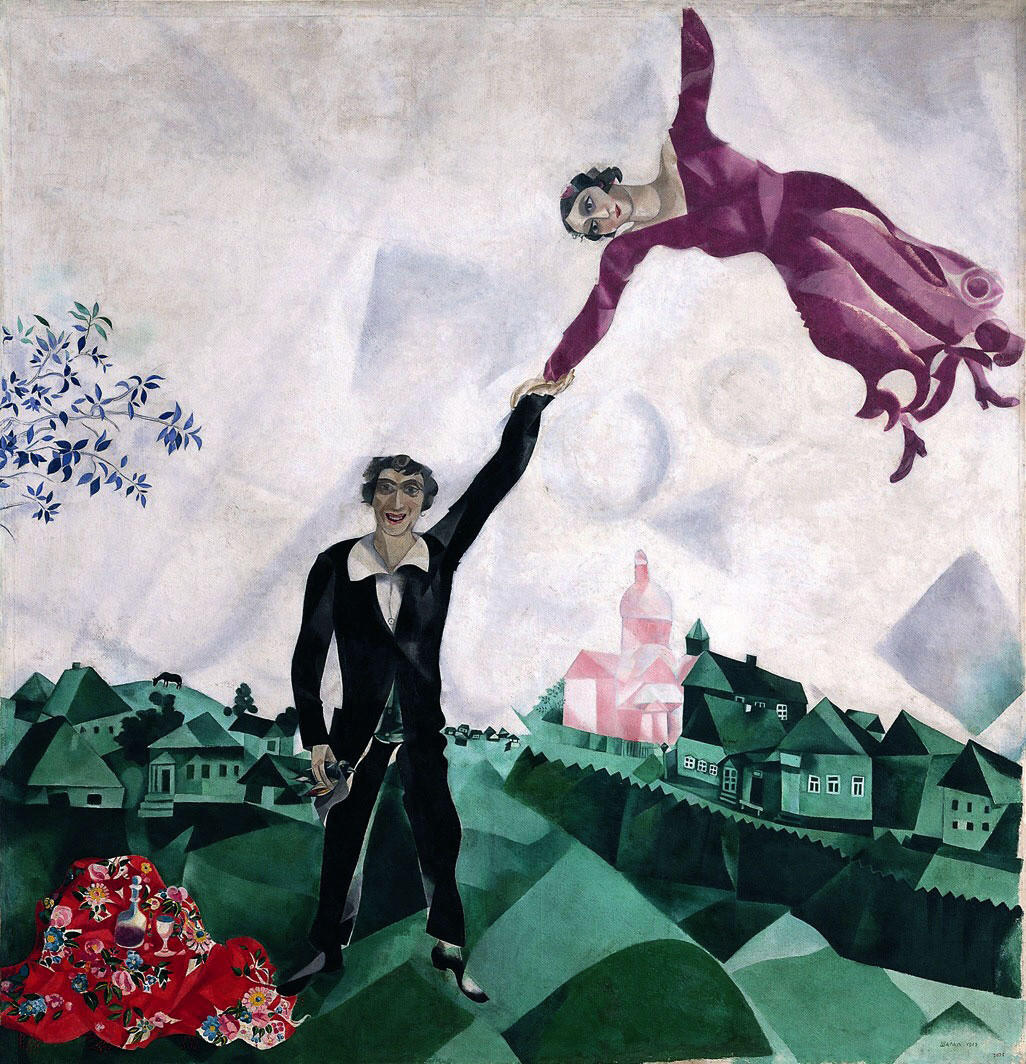 Chagall's deeply symbolic painting continues his cycle of self-portraits with his beloved wife Bella, in which they soar over their hometown of Vitebsk in modern-day Belarus. 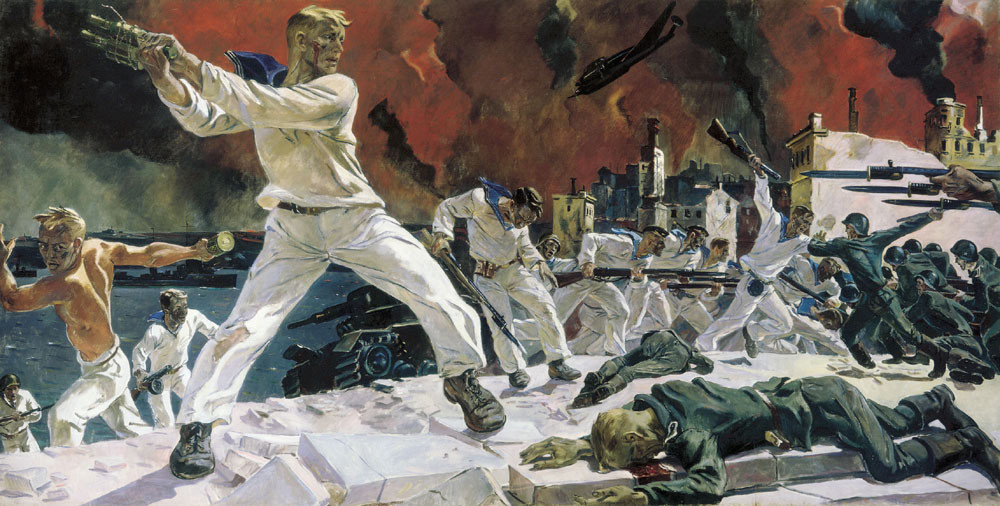 One of the most famous war paintings in Soviet art, this monumental, 2x4-meter canvas departs from the canons of both socialist realism and perspective, but the intensity and symbolism of the expressive means are what matter here.