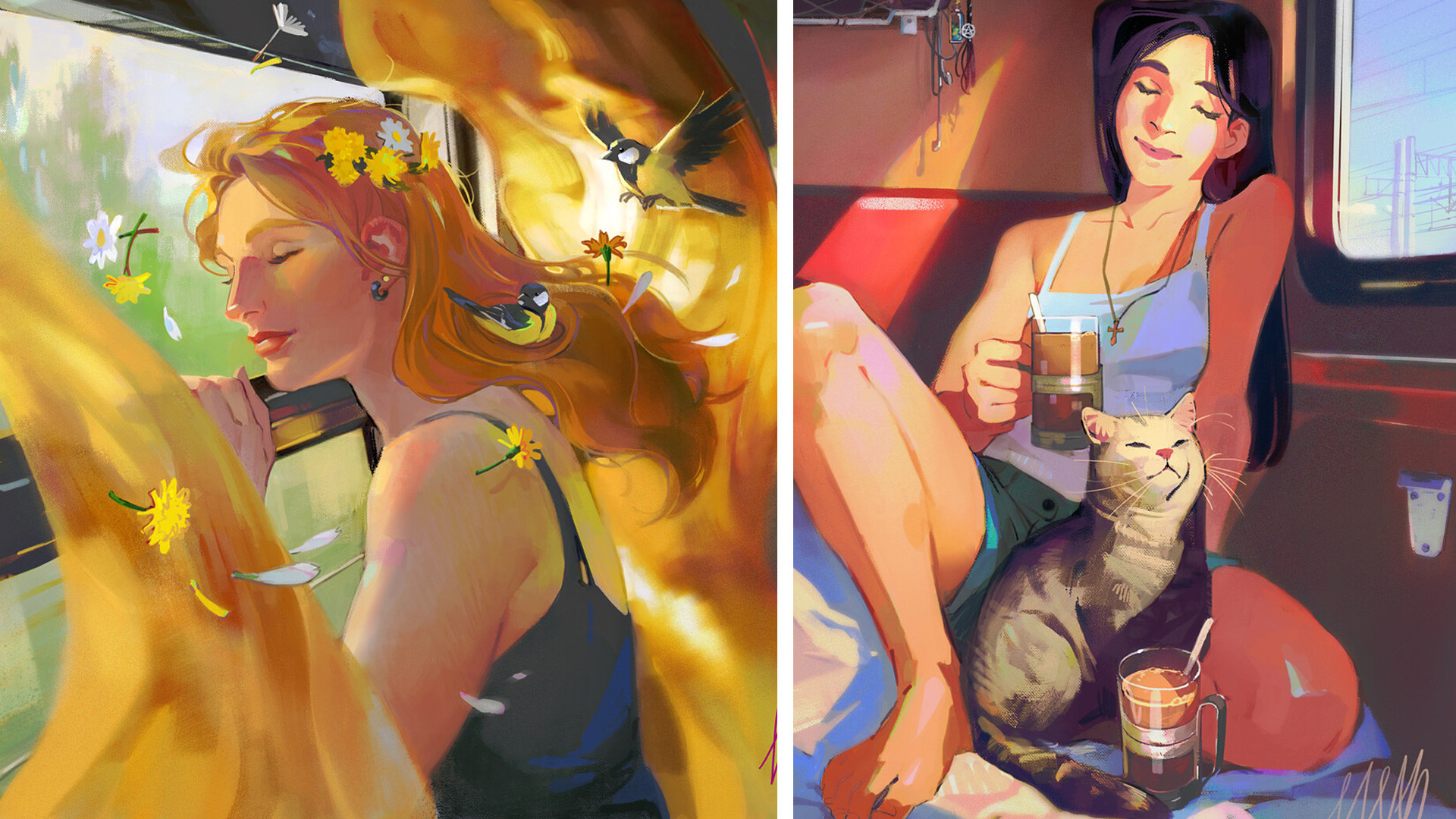 Yulia Zhuravlyova
Tea-glass holders, instant noodles, Baba Yaga and many, many cats - a Russian artist has recreated the magical atmosphere of traveling by train in Russia, adding some fantasy motifs to it.

Young women, in the company of cats and armed with guitars and brooms, are setting off on a train journey in Russia – such is the plot of a series of artworks created by a 31-year-old artist from Omsk, Yulia Zhuravlyova. 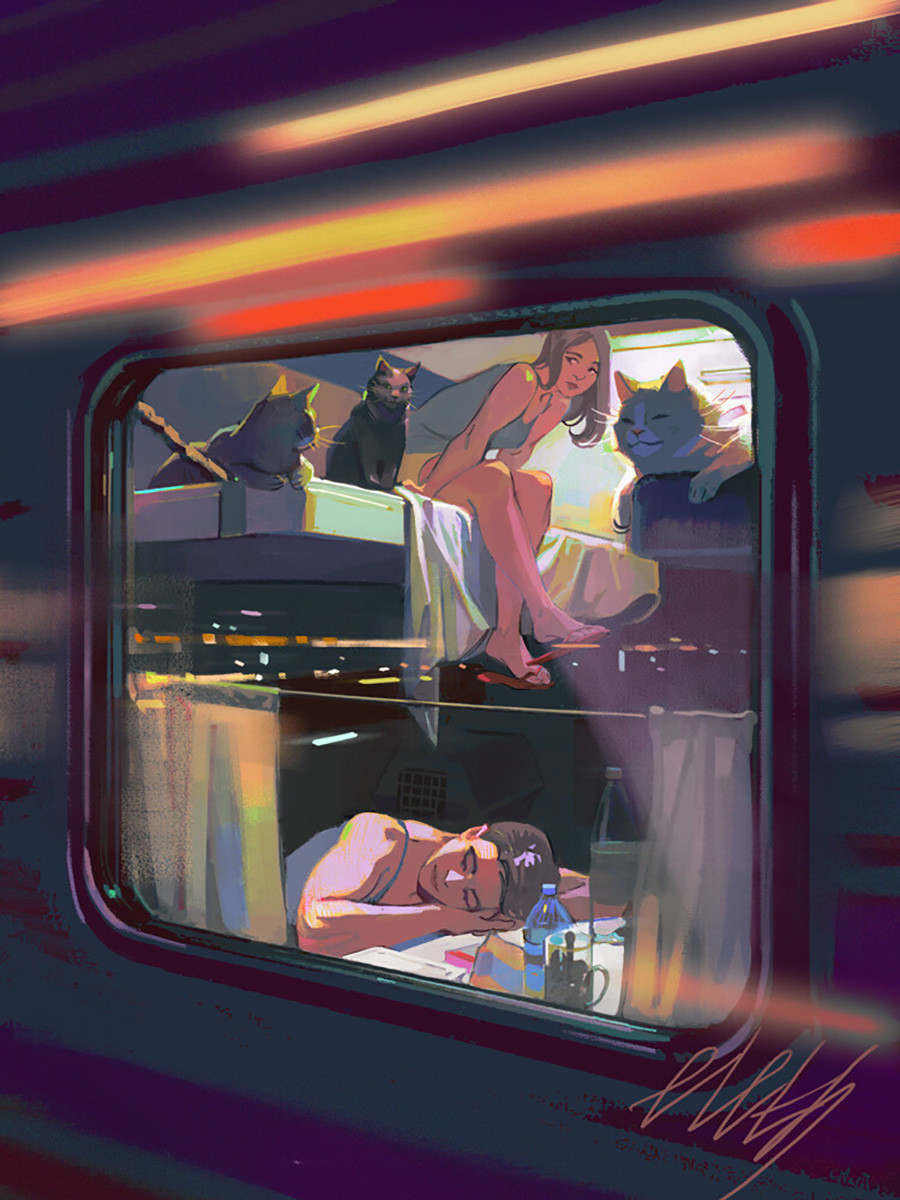 Yulia has been drawing professionally for eight years, and her main characters are witches living in the reality of present-day life in Russia. 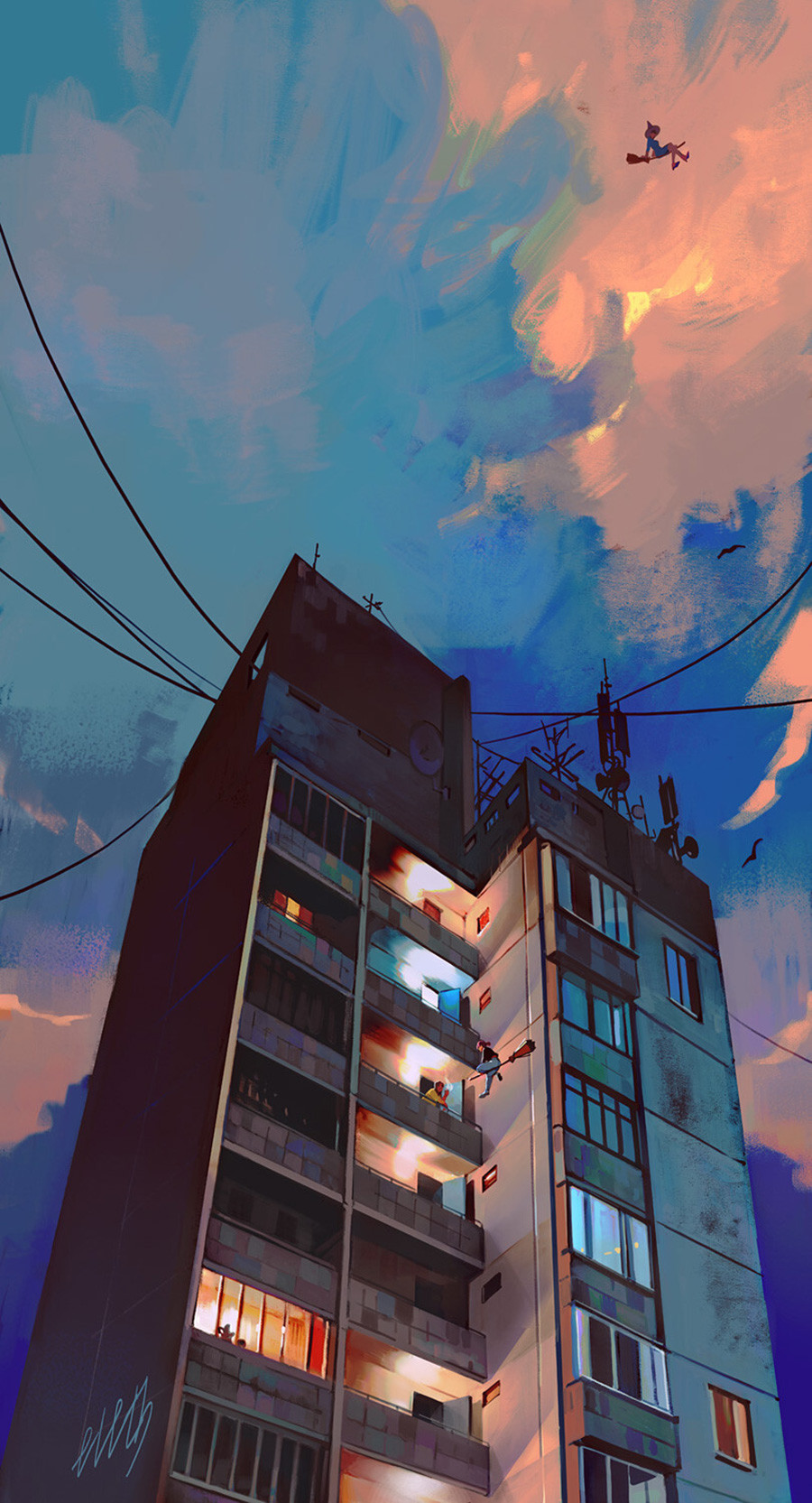 In one of her earlier series of works, young witches lived in an ordinary Khrushchyovka apartment block, went grocery shopping on broomsticks and worked as couriers in a delivery service. 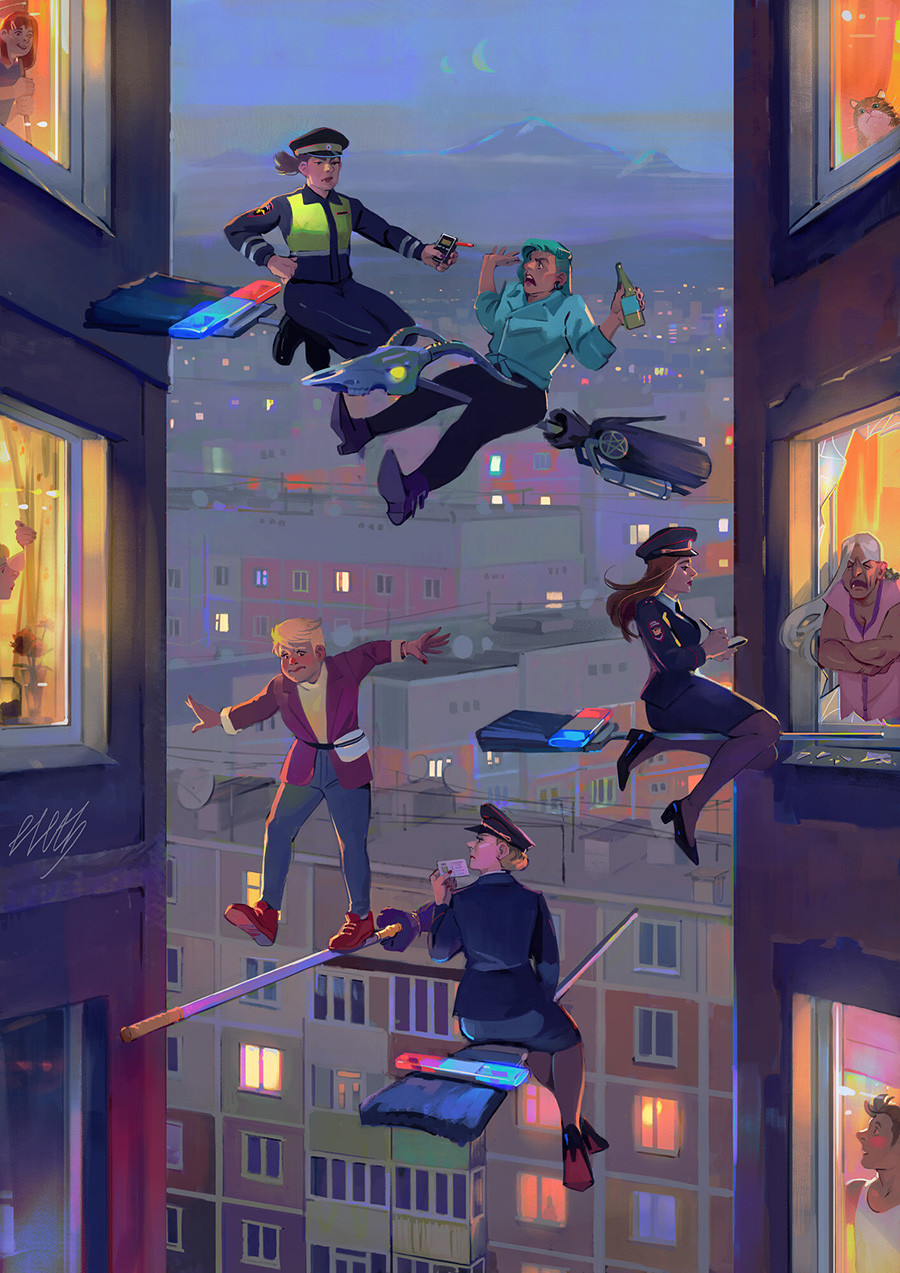 “I’m inspired by mythology, post-Soviet surroundings and scenes of everyday life, and I love to combine these elements in my works. I came up with the train plot quite organically, as a follow-up to my earlier works. I loved the series about witches in our everyday life so much that I decided to send them on a journey. And of course, no travel is as romantic as a train journey,” Zhuravlyova says, explaining the origins of the series. 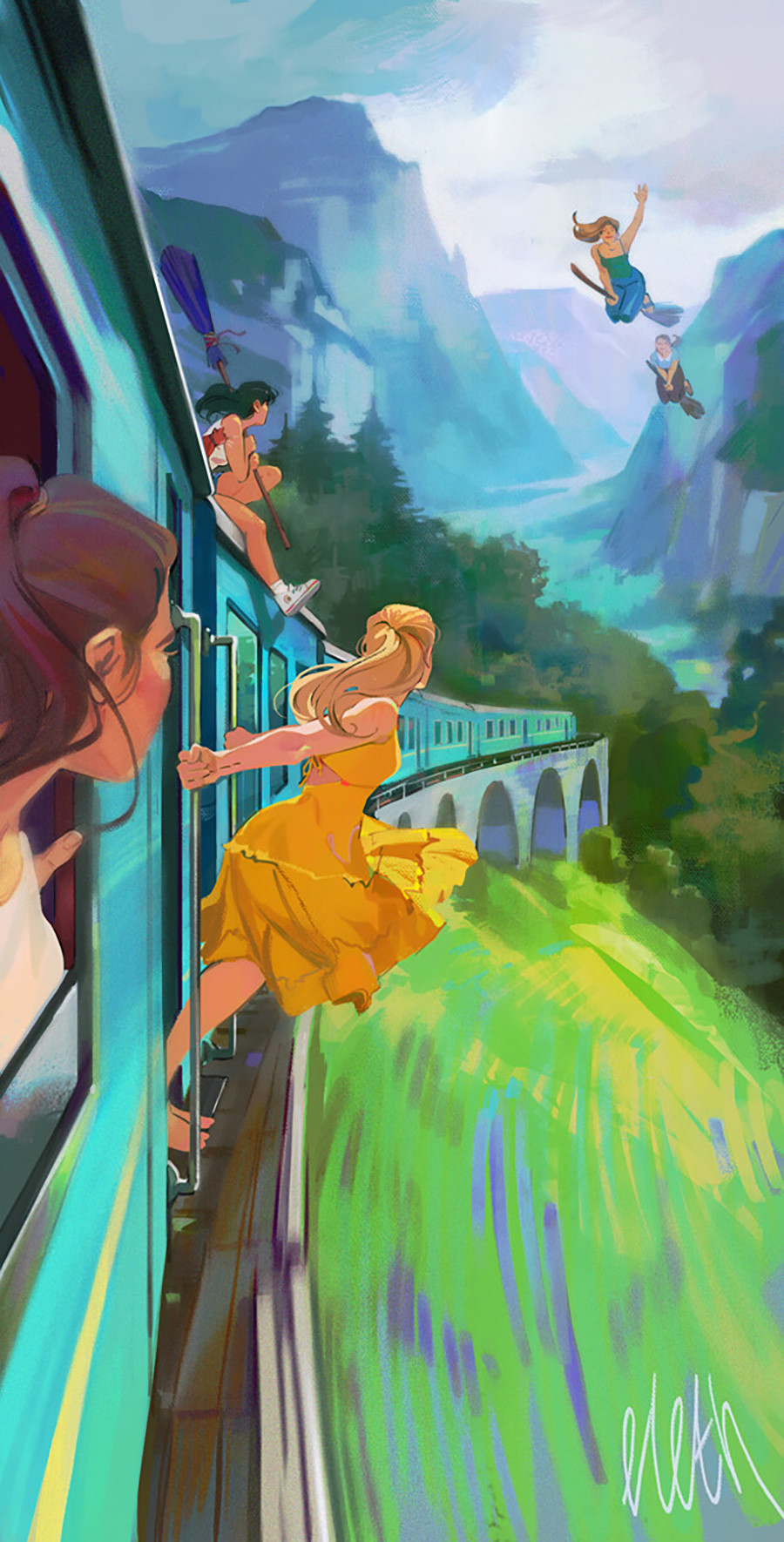 In her drawings, witches drink lemon tea from glasses in traditional podstakanniks (tea-glass holders), make sausage sandwiches hover in the air, and wave from the train windows to other witches who prefer to fly on their broomsticks. 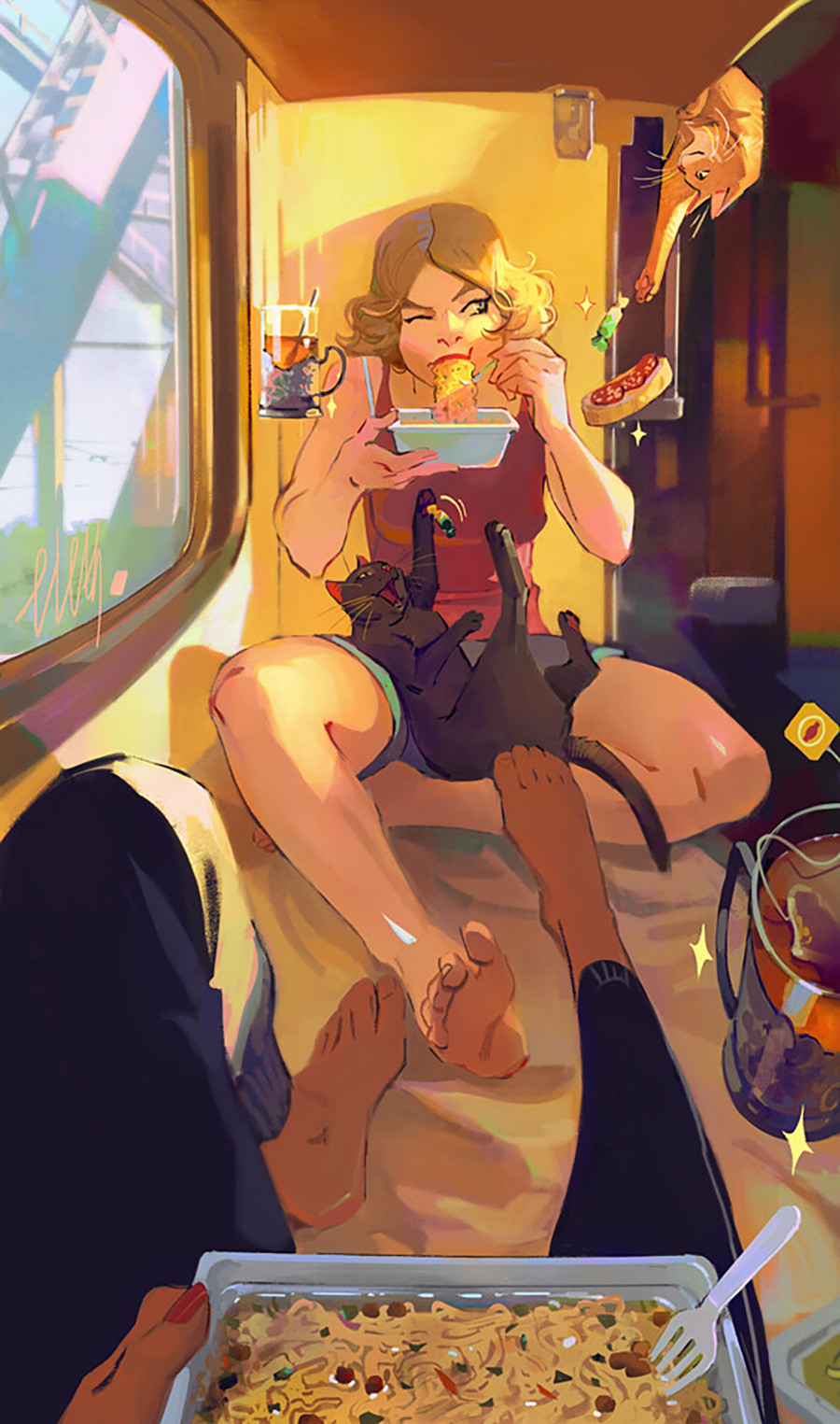 In one of the drawings, Baba Yaga is throwing pies to the witches right through the train window. 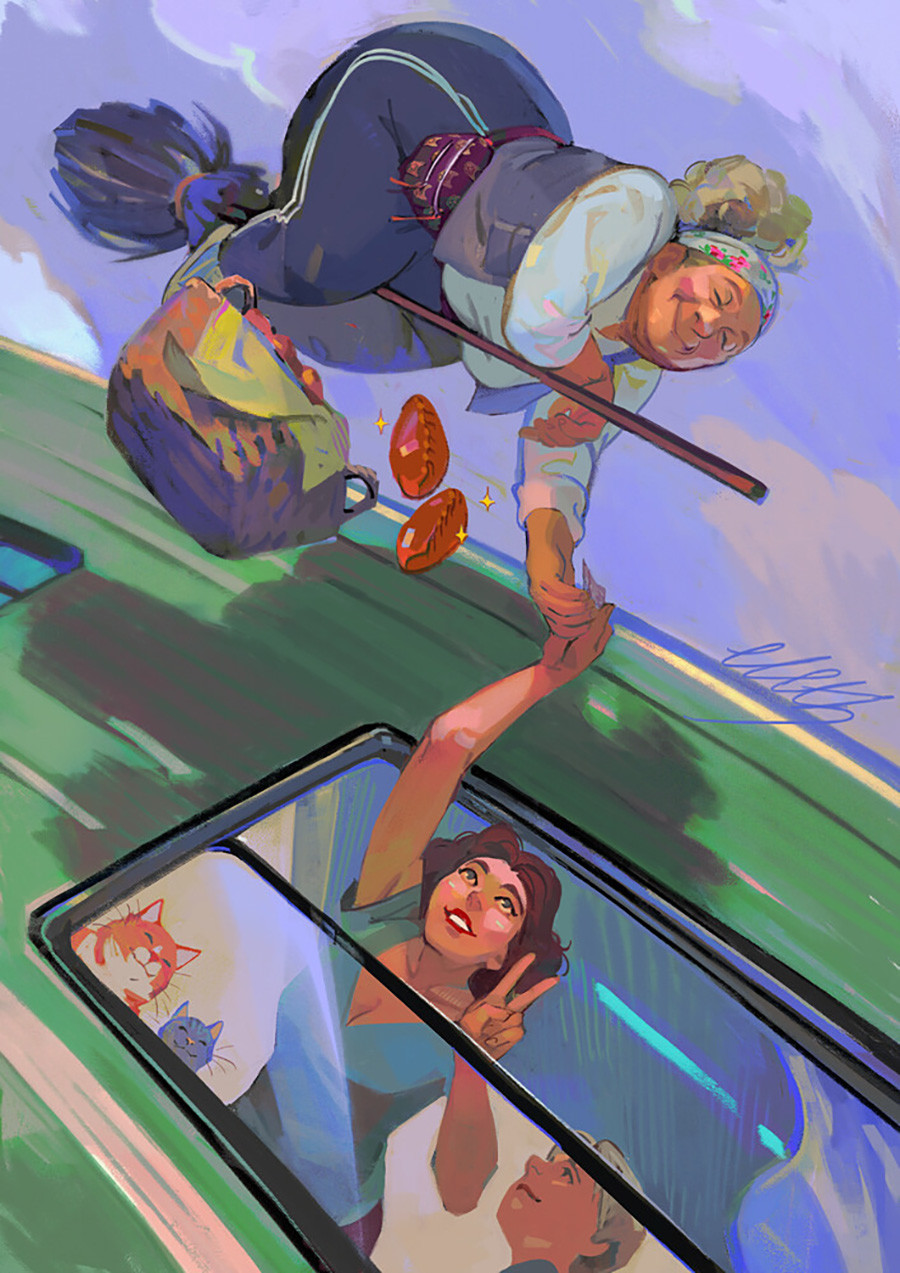 In another, two witches decide to use a cat to take revenge on a passenger for his torn (and probably smelly) socks. 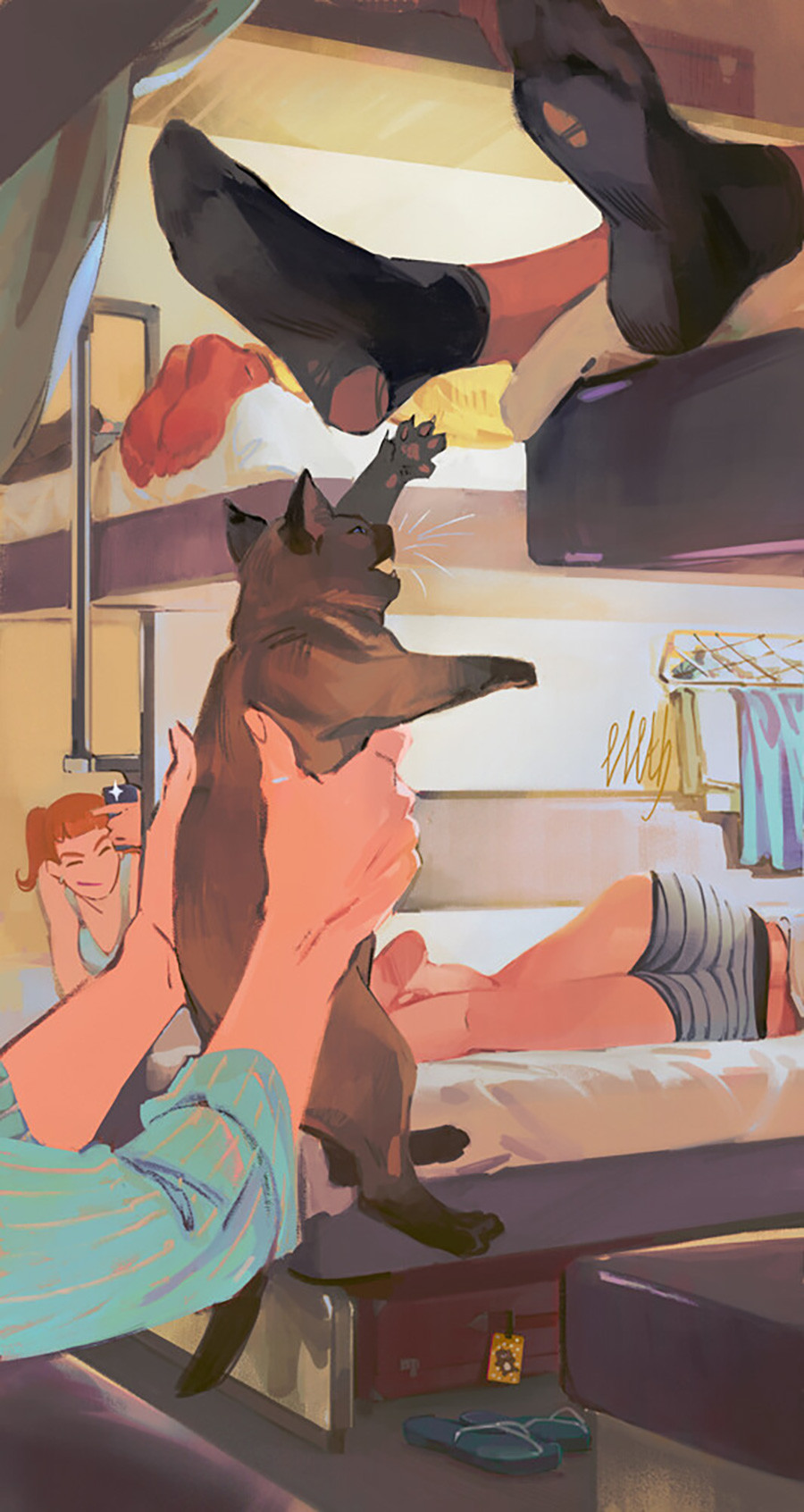 In yet another one, a golden-haired young woman is looking out of the window, dreaming that she’ll soon be outdoors and surrounded by nature. 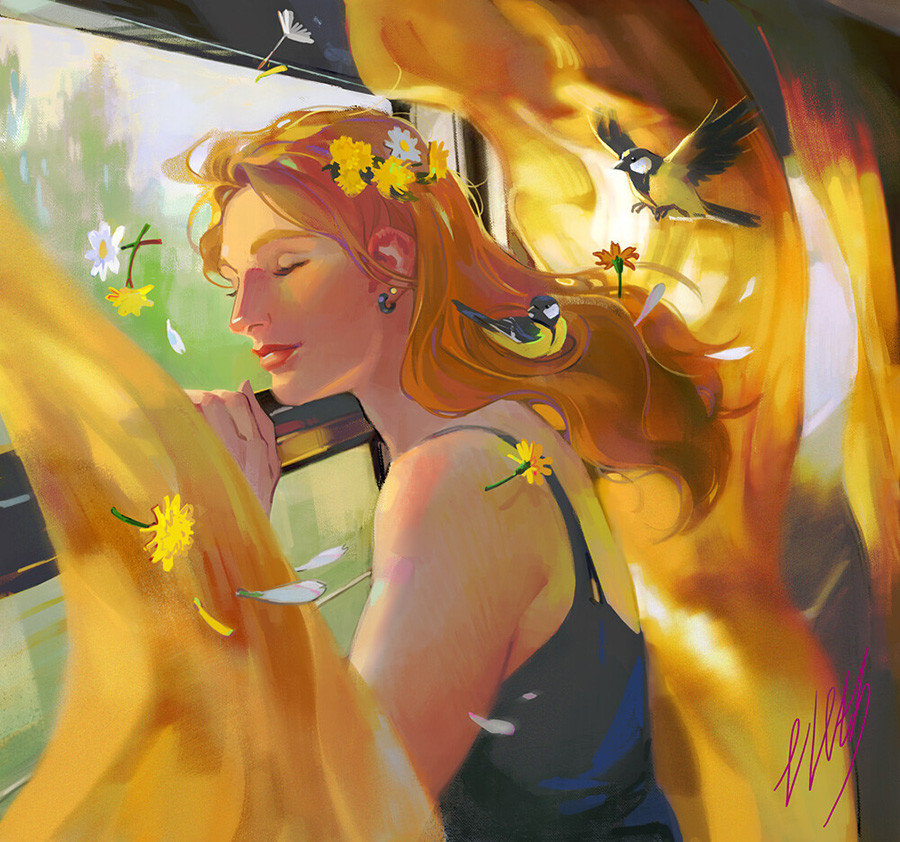 The artist says that she hasn’t been on a long-distance train for several years, except for a night journey on a Moscow to St. Petersburg sleeper and back, but she has fond memories of traveling by train with her student friends. 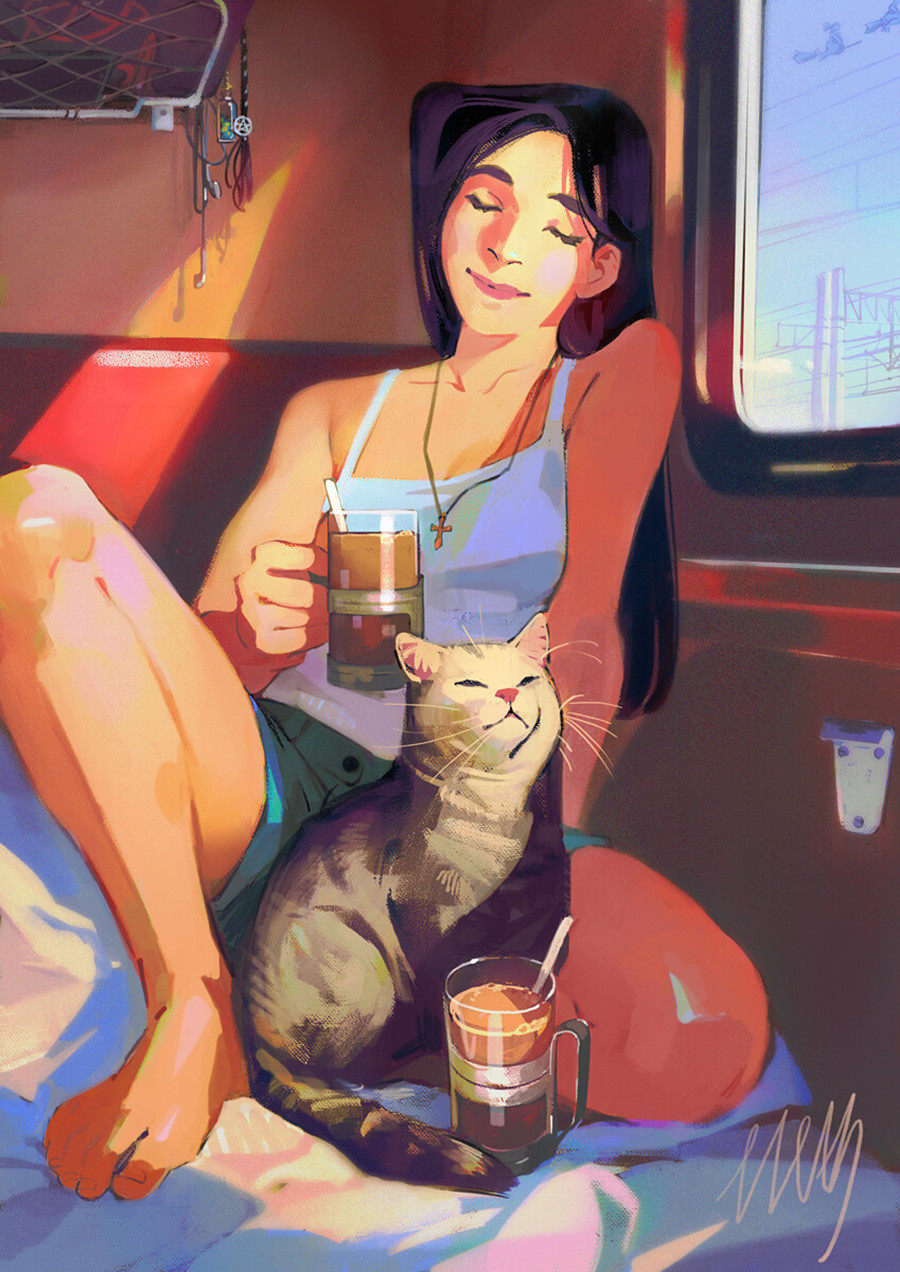 “Of course, when you’re on a train, especially if traveling third class (in an open-plan carriage), there’s a certain element of discomfort, but when you’re 18 or 20, going on a long trip with friends is a great adventure, so I remember only the good things: Playing cards, drinking sweet tea and talking all night long. When else can you enjoy it if not when you’re a student?” Zhuravlyova recalls. 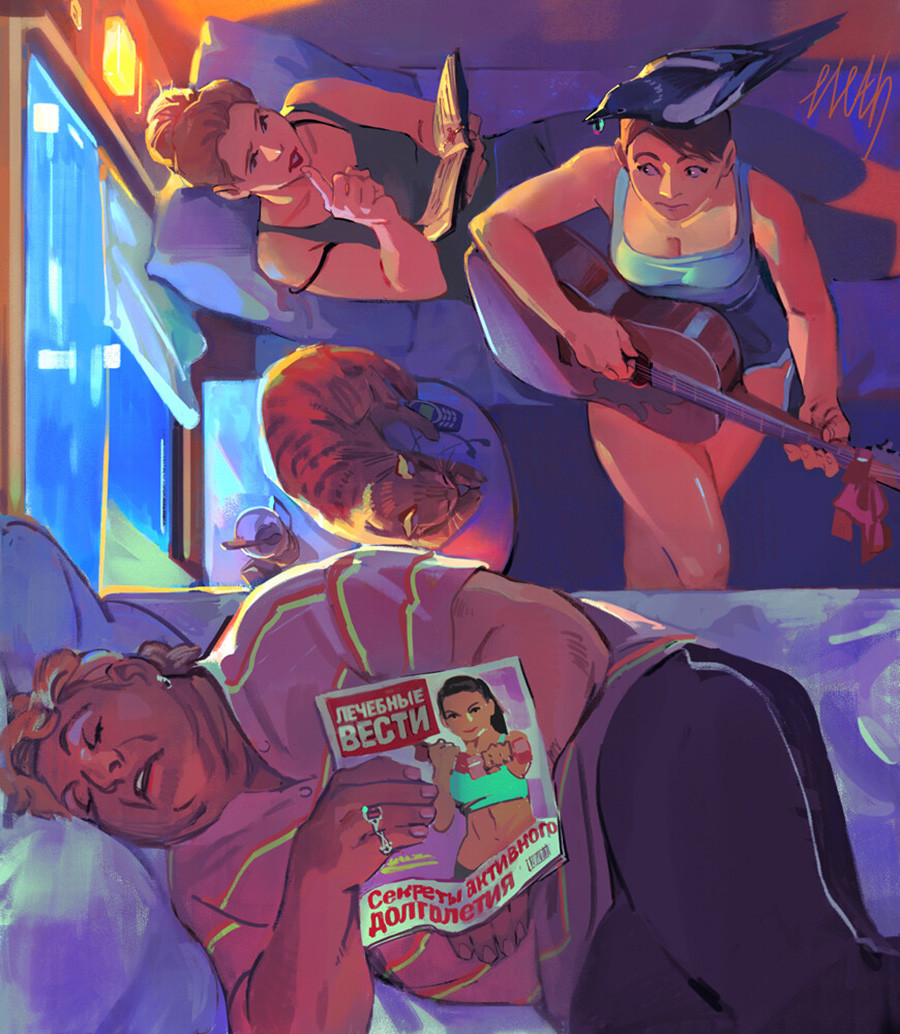