7 Soviet COMEDIES by Leonid Gaidai you should watch 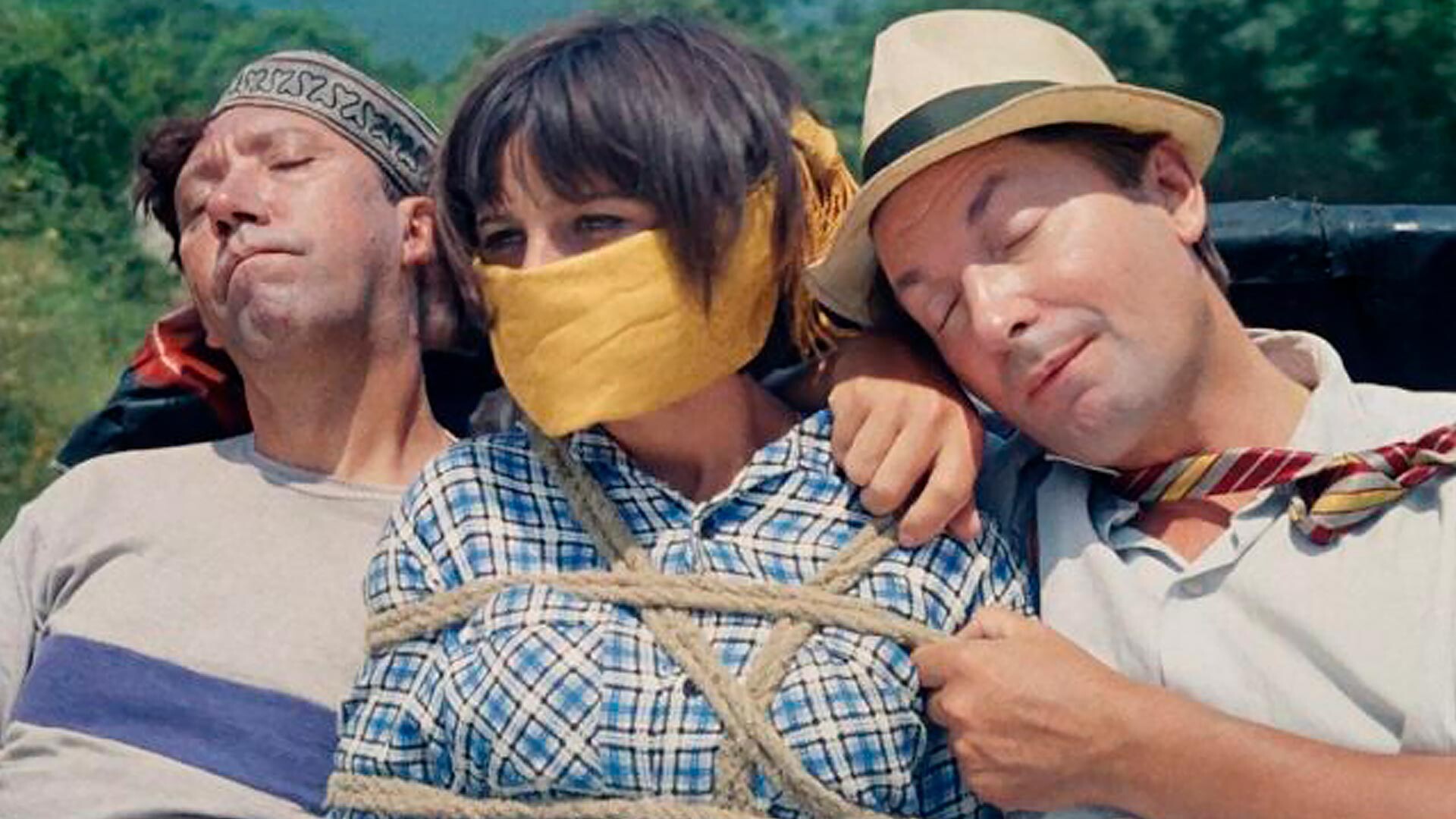 Leonid Gaidai//Mosfilm, 1966
In the USSR, these movies beat all box office records and quotes from the movies have entered the language as popular catchphrases. And, when shown on television, they still attract high ratings to this day. 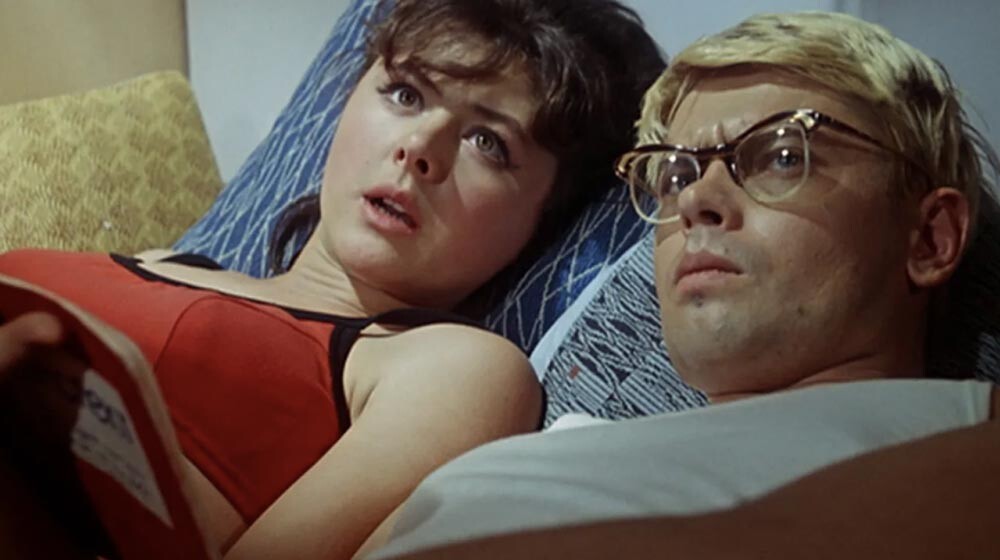 Gaidai’s early work, where he had a go at making revolutionary movies and screen adaptations of classical literature, didn’t arouse the interest of the general public. But, in 1965, his movie ‘Operation Y and Shurik's Other Adventures’ was released. It topped the Soviet box office and forever inscribed the name of the movie director in the annals of Soviet cinema history. Now it’s a Soviet comedy classic.

The movie consists of three short stories interlinked with the young main protagonist, Shurik. The character - a somewhat naive, but honest and principled student - has become a real favorite with the broad public.

In the first story, titled ‘Workmate’, Shurik finds himself working at a construction site with someone who is a public nuisance and takes advantage of Shurik’s naivety. In ‘Déjà vu’, Shurik is so immersed in preparing for his university exams that he doesn’t notice a pretty female fellow student. In the third story, he accidentally prevents a break-in at a warehouse plotted by the petty criminals named Coward, Fool and Pro. The members of this comedy trio, played by actors Georgy Vitsin, Yuri Nikulin and Yevgeny Morgunov, have become real cult figures and have featured in other works by Gaidai - Dog Barbos and Unusual Cross and Bootleggers. 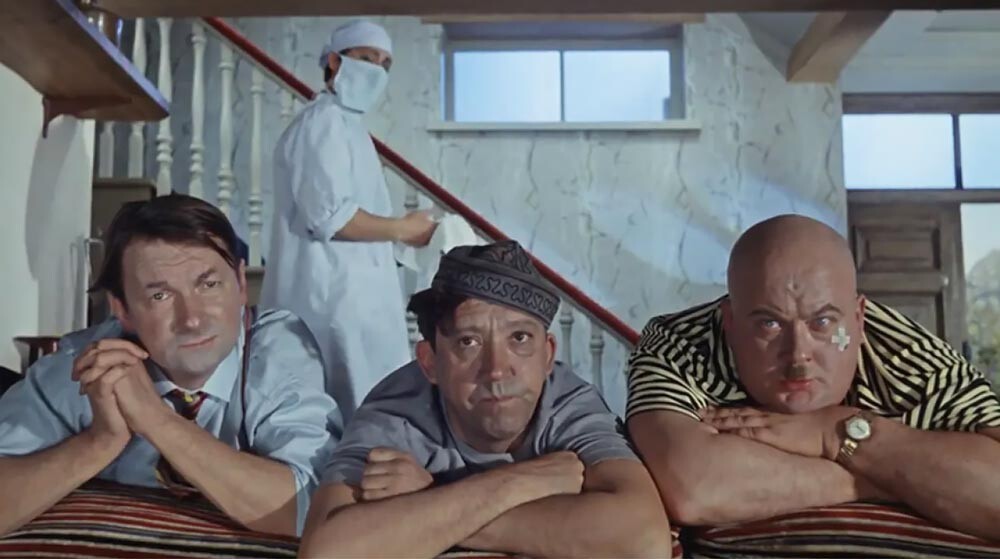 The unprecedented success of Operation Y literally forced Gaidai to shoot a sequel to Shurik’s adventures. This time, it wasn’t a collection of short stories, but a full-length movie. The farcical, bumbling criminals - Fool, Coward and Pro - also appear in the movie.

According to the plot, student Shurik goes on a summer field trip to the Caucasus to research local folklore customs and traditions. He makes the acquaintance of Nina, “an athlete, a member of the Komsomol and - last but not least - a pretty girl”. Nina is holidaying there. She is staying with her uncle and is soon to be married to a local man. At the wedding, Shurik inadvertently becomes an accomplice to a well-known Caucasian custom - the kidnapping of the bride…

The genre of the movie was defined as eccentric comedy and there are elements of slapstick, ridiculous jokes and the comedy techniques of the silent movies. This sequel to the Shurik story was also the box-office hit of the year. 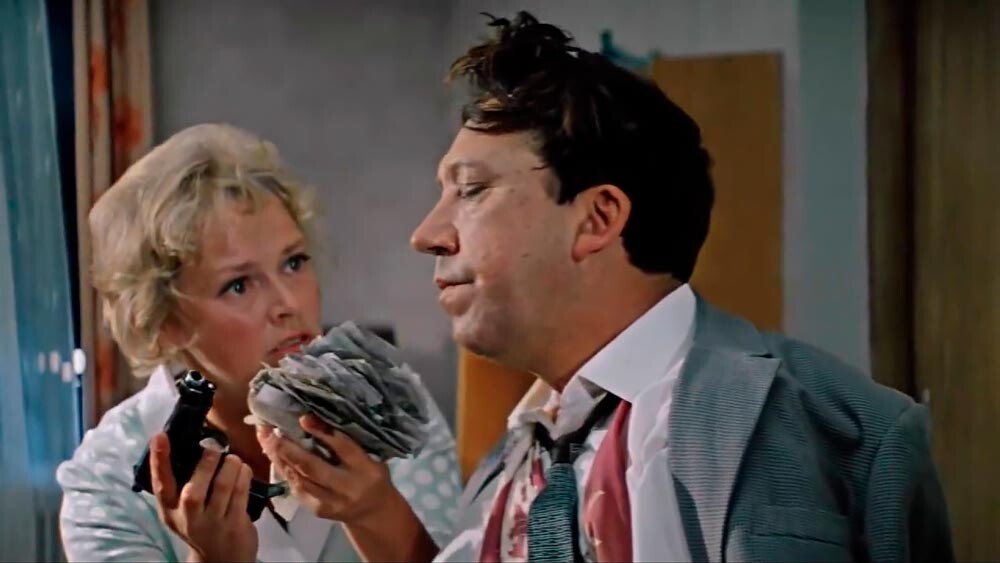 In this popular comedy, the plot and main character were specially created for Yuri Nikulin, a famous actor and clown, with a wide range of comedy and acting talents.

After appearing as Fool, one of the trio of petty criminals in Gaidai’s previous movies, in ‘The Diamond Arm’, Nikulin plays an honest and modest Soviet citizen named Semyon Gorbunkov. During a foreign trip, he breaks his arm and smugglers, mistaking him for an accomplice, hide diamonds inside his orthopedic cast.

The Soviet police ask Gorbunkov to help them expose the criminals and the protagonist, who is far from heroic in appearance, becomes a real undercover agent. He can’t even tell his wife about his secret assignment. His opponent is an incredibly charming criminal played by another star of Soviet cinema, Andrei Mironov. 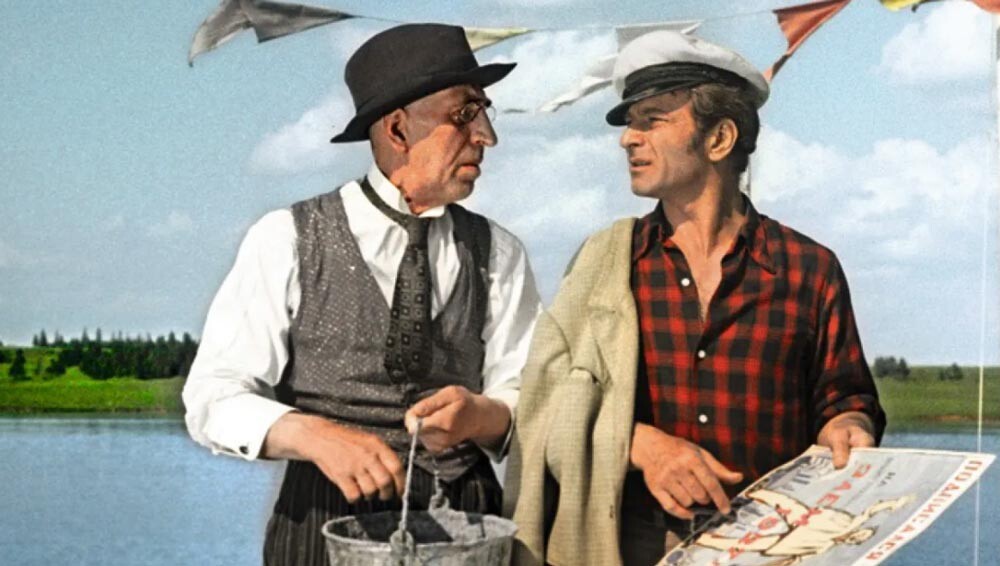 Departing from the genre of undiluted eccentric comedy, though not abandoning its techniques, Gaidai went back to screen adaptations of literary works. The movie director had been flirting with the idea of a movie based on ‘The Twelve Chairs’, a novel by Ilya Ilf and Yevgeny Petrov, for several years. The movie ended up becoming the top box office draw of 1971.

Conman Ostap Bender arrives in the small town of Stargorod, where he meets the former nobleman Ippolit Vorobyaninov. Ippolit is looking for the chairs from a dining room set, inside one of which his mother-in-law hid her diamonds during the Revolution. But there is a slight hitch - the chairs were taken away by Soviet authorities and sold individually. Bender volunteers to help in the hope of a share.

In their quest to find the cherished diamonds, the fortune-hunting pair embark on a whole journey across the infant Soviet Union, packed with the most improbable adventures. But, time after time, or rather, chair after chair, failure awaits them. 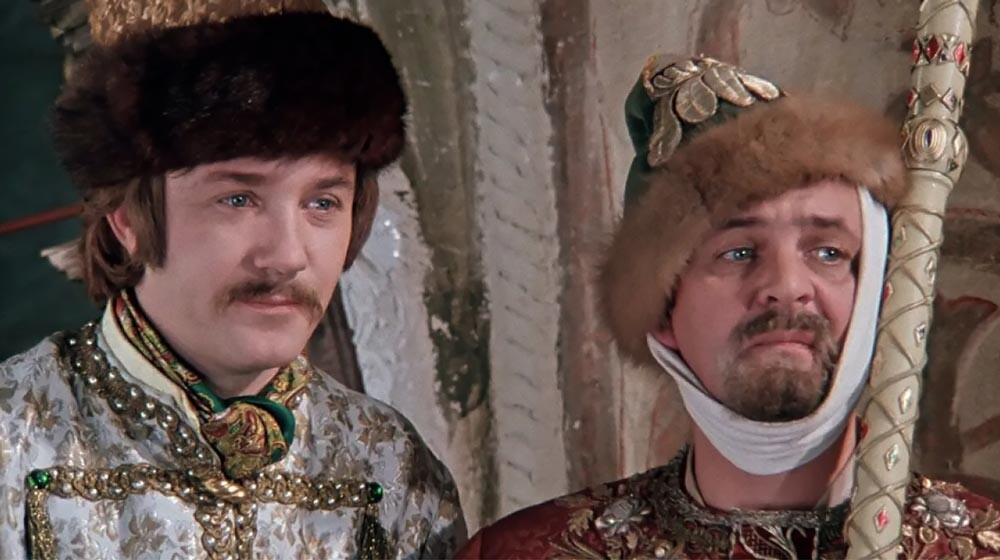 In another screen adaptation of a Mikhail Bulgakov play, Gaidai returns to his hero, Shurik. However, actor Aleksandr Demyanenko didn’t portray Shurik the naive student, but Shurik as a fully grown-up and serious Soviet scientist. He invents a time machine and ends up right in the court of Ivan the Terrible.

But everything goes wrong - the time machine develops a fault and Ivan the Terrible gets stranded in a Soviet apartment, while a lookalike is sent into the past by mistake in his place - a career thief who at that moment was robbing the apartment next to Shurik’s.

The comedy topped the box office in 1973. The director also considered offering the role of Ivan the Terrible to Yuri Nikulin, but he turned down the part in the belief the movie would not be cleared for release in the first place. In any case, the role was brilliantly played by Yury Yakovlev. 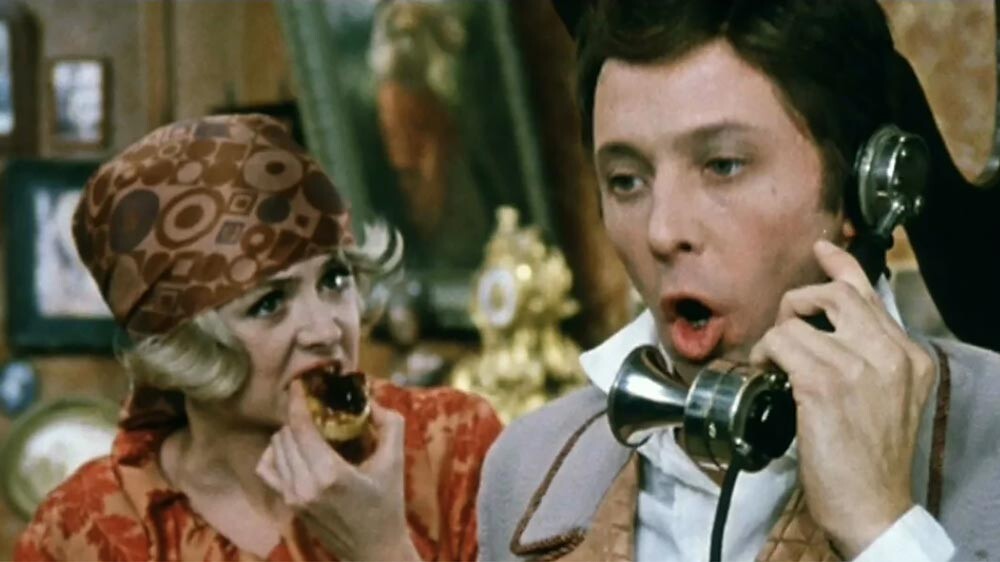 The movie consists of three short stories based on subjects taken from the satirical tales of Mikahil Zoshchenko. They all poke fun at “petit bourgeois” attitudes to love. The action takes place in the 1920s, when there was a perceptible easing of conditions and the New Economic Policy was being implemented.

In the first of the tales, ‘Crime and Punishment’, a store manager is summoned to appear before an investigator. Fearing he is going to be jailed and have his property confiscated, he asks his wife to sell everything as quickly as possible - which she starts urgently doing. The trouble is that he has not yet found out why he is being summoned…

The second describes a ‘Diverting Adventure’ - comical situations, which befall characters unfaithful to their husbands or wives. An actor cheats on his wife with a married woman, while, at the same time, the married woman’s husband is sleeping with her friend and the wife of the actor is having an affair with a third person, who turns out to be the neighbor of the friend of the lover of her husband… In the end, they are all caught out and reflect together on what they are to do next.

The third story, ‘Wedding Caper’, tells of the dangers of acting spontaneously. The hero, Volodka, meets his future wife on a tram and very soon they decide to marry.  He is late for the wedding, which is being held at her home, after spending too much time at the barber’s. And in the throng of guests, he fails to… recognize his future wife! Until then, he had only ever seen her in her winter coat and hat.

Like all of Gaidai’s movies, the movie is full of the music and songs by Aleksandr Zatsepin, which are cherished by more than one generation of cinema-goers.

7. Weather Is Good on Deribasovskaya, It Rains Again on Brighton Beach (1992) 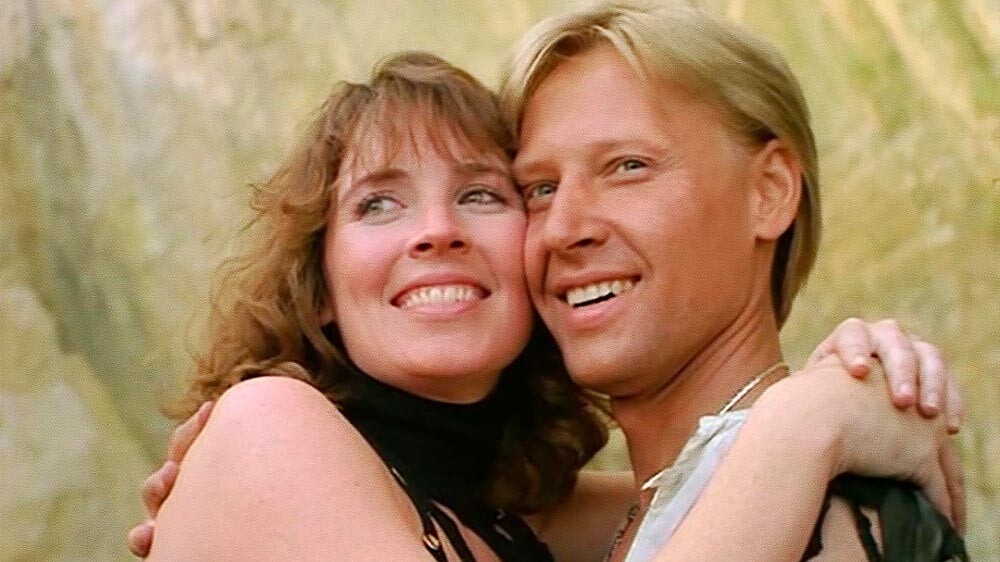 Gaidai’s last movie was not a Soviet movie. It was a perestroyka-period comedy that makes fun of the last years of the USSR and the espionage standoff with the U.S.

The Americans ask the KGB to help deal with the Russian mafia, which is running amok, and secret agent Fyodor Sokolov is sent from Odessa to Brighton Beach. His mission is to unmask an elusive Mafia boss known as ‘The Artist’ who adopts different identities, so no-one can say what he really looks like. The agent is aided in his secret operation by an alluring American girl named Mary.

The movie’s lengthy title is made up of the secret phrases they were supposed to use to recognize one another. The title is a play on coded phrases dating from the Spanish Civil War era and the revolution in Chile:  “The skies are clear over the whole of Spain” and “It’s raining in Santiago”.