How poet Nekrasov searched for happiness in Russia 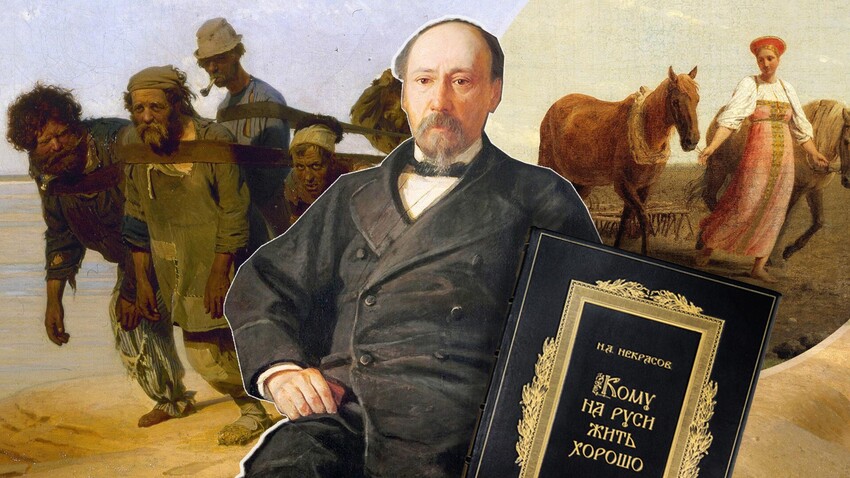 Russia Beyond (Russian Museum; Tretyakov Gallery)
Internationally, poet Nikolai Nekrasov (1821-1877) is not as widely known as the great Russian novelists of the 19th century. And yet, he is no less important for understanding the Russian people than Tolstoy or Dostoevsky.

Tell me now of some abode -

I have surely never seen it -

Where your sower and your guardian,

The meek Russian peasant, does not moan?

These are lines from Nikolai Nekrasov’s poem ‘Musings at the Front Door’. Long before the Bolshevik Revolution of 1917, back in the mid-19th century, the poet was one of the first in the country to become concerned about what life was like for peasants in Russia. He understood that the whole of Russia “rested” on peasants, he saw their suffering with his own eyes, felt sorry for them and wrote a lot about their hard life.

From a Romantic to a progressive publisher 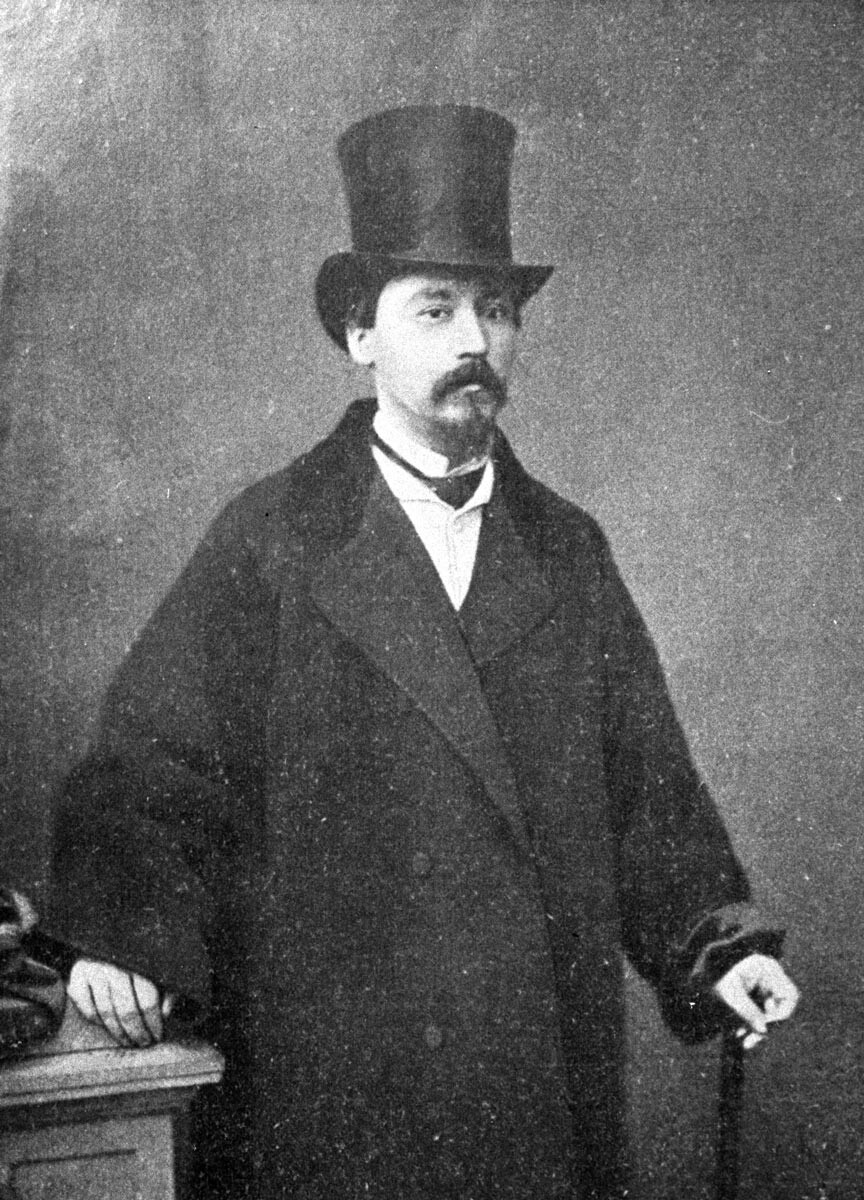 Nikolai Nekrasov. Reproduction of the 1860s photo from the State Literary Museum

In Soviet literary criticism, Nekrasov was considered an adherent of revolutionary democratic views. From childhood, he saw his father, a landowner, treat his serfs with cruelty. He witnessed and was keenly aware of what social injustice was.

Nekrasov wrote his first poems in adolescence. His father wanted him to pursue a military career, but the young man disobeyed and went to St. Petersburg, where he joined the philological faculty at the university as a non-matriculated student. His angry father withdrew all financial support and the young poet experienced all the hardships of life firsthand. He took on any work available: as a teacher, as an editor and, in the meantime, managed to find time to write his own poetry and prose. At 19, Nekrasov released his first collection of poems entitled ‘Dreams and Sounds’, which was met with some favorable reviews.

In the 1840s, he got a job with one of the most influential literary magazines of the time, the ‘Otechestvennye Zapiski’ (“Notes of the Fatherland”), where he met the famous critic Vissarion Belinsky. With his help, Nekrasov made friends with many Russian writers and began a successful publishing business. He asked writers to give him a story or a novella as a present and compiled these free manuscripts into almanacs featuring works by Fyodor Dostoevsky, Ivan Turgenev and Alexander Herzen. 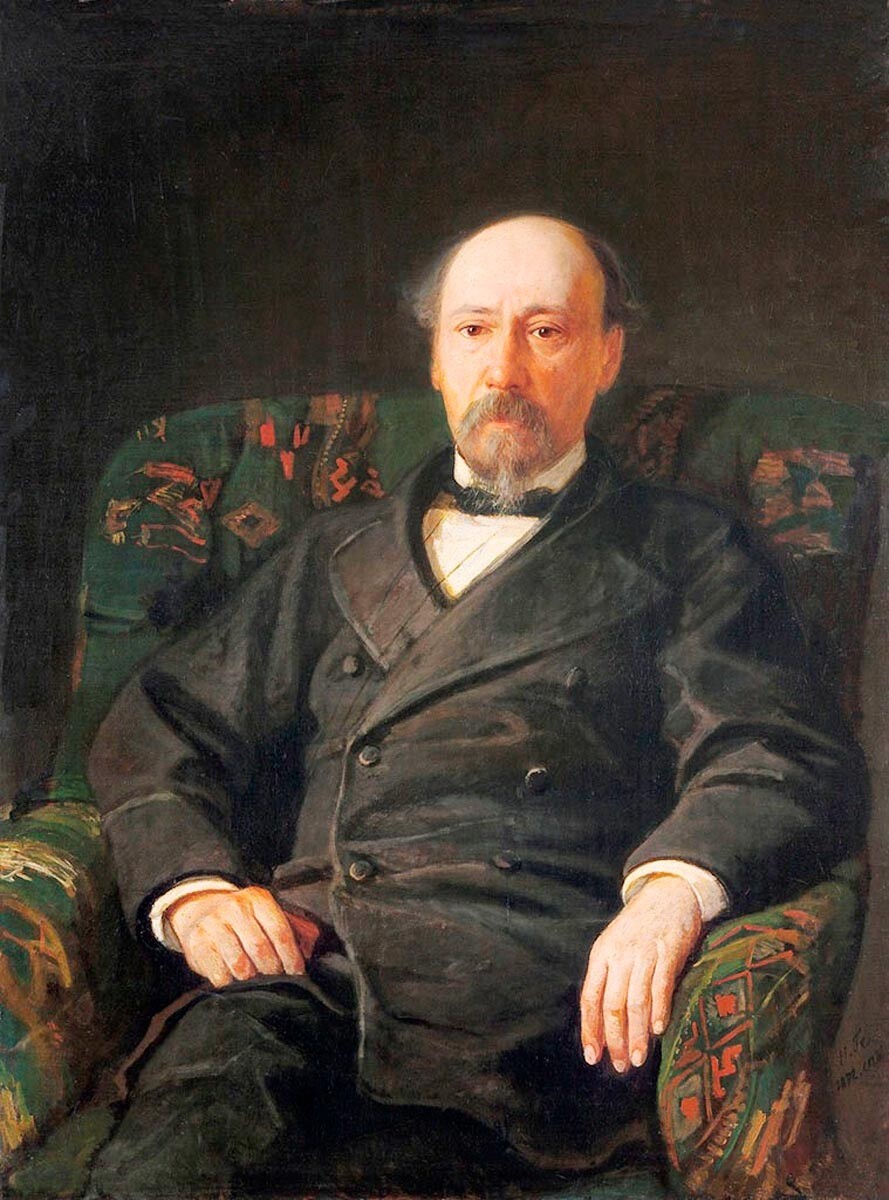 Later, Nekrasov parted ways with Belinsky and became the publisher of another important literary journal, Sovremennik (The Contemporary), which had been founded by Alexander Pushkin. Through his efforts, the magazine discovered several literary talents and launched the fame of Tolstoy and Dostoevsky.

A poet and a citizen

Nekrasov gave preference to “civic” literature, which raised socially significant issues. “Wake up: smash vices boldly...”, “You may not be a poet / But you must be a citizen,” he wrote in the poem ‘Poet and Citizen’, which reflected his views on what the purpose of poetry was.

Nekrasov himself was true to his convictions, with many of his works highlighting the suffering of the Russian people. “The Russian people have endured enough,” he wrote in the poem ‘Railway’. “They will endure everything that the Lord sends!” 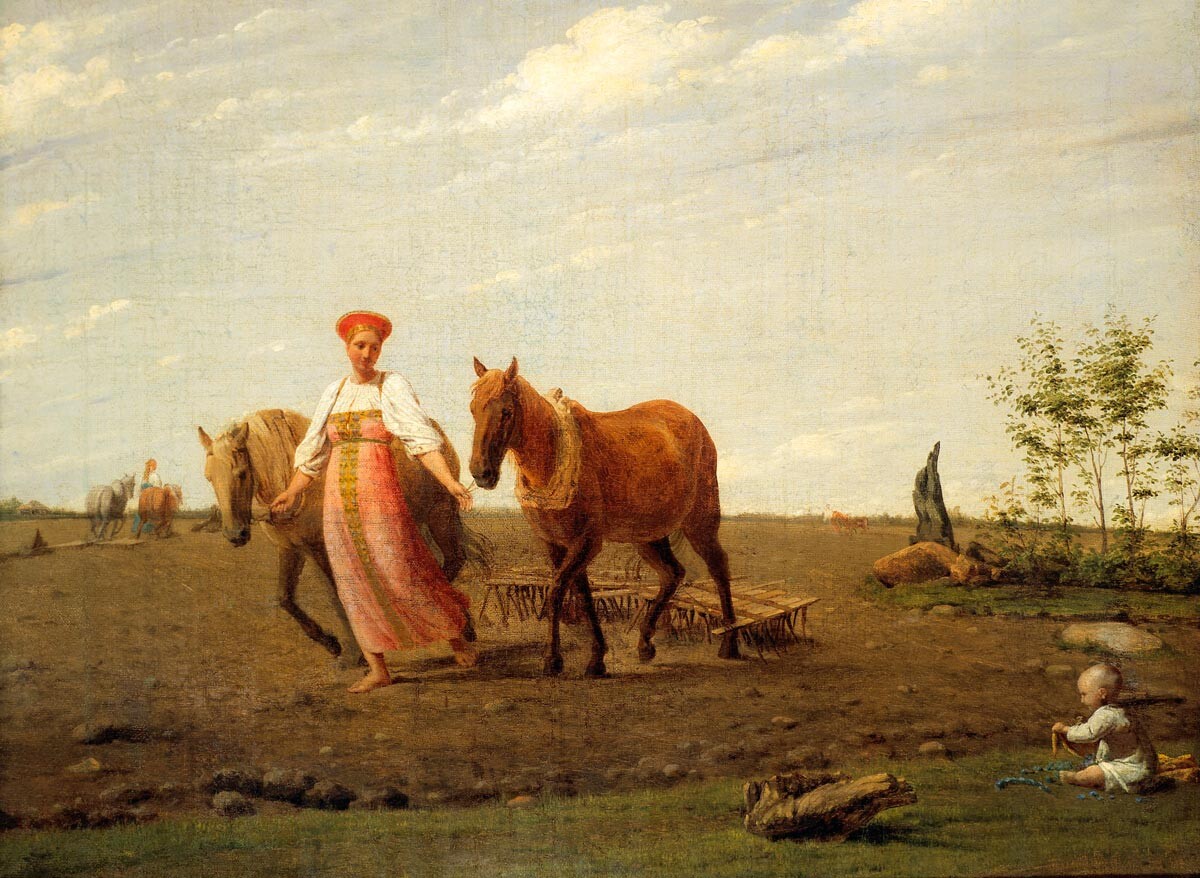 The poet was particularly sensitive to the terrible position of women in Russian society. His father treated his mother badly and from childhood Nekrasov realized the difficult life of a Russian woman. No other Russian author felt it more than he did.

In his poem ‘Russian Women’ (1871), Nekrasov combined two themes that preoccupied him the most: the life of peasants and the oppression of women. The poem tells the story of two Decembrists’ wives who follow their prisoner husbands alone across the country to Siberia and see terrible scenes of a “downtrodden, desperate country”, where they meet “a stern master and a miserable hard-working peasant with a downcast head... How the former is used to being a ruler and the latter, to being a slave!” 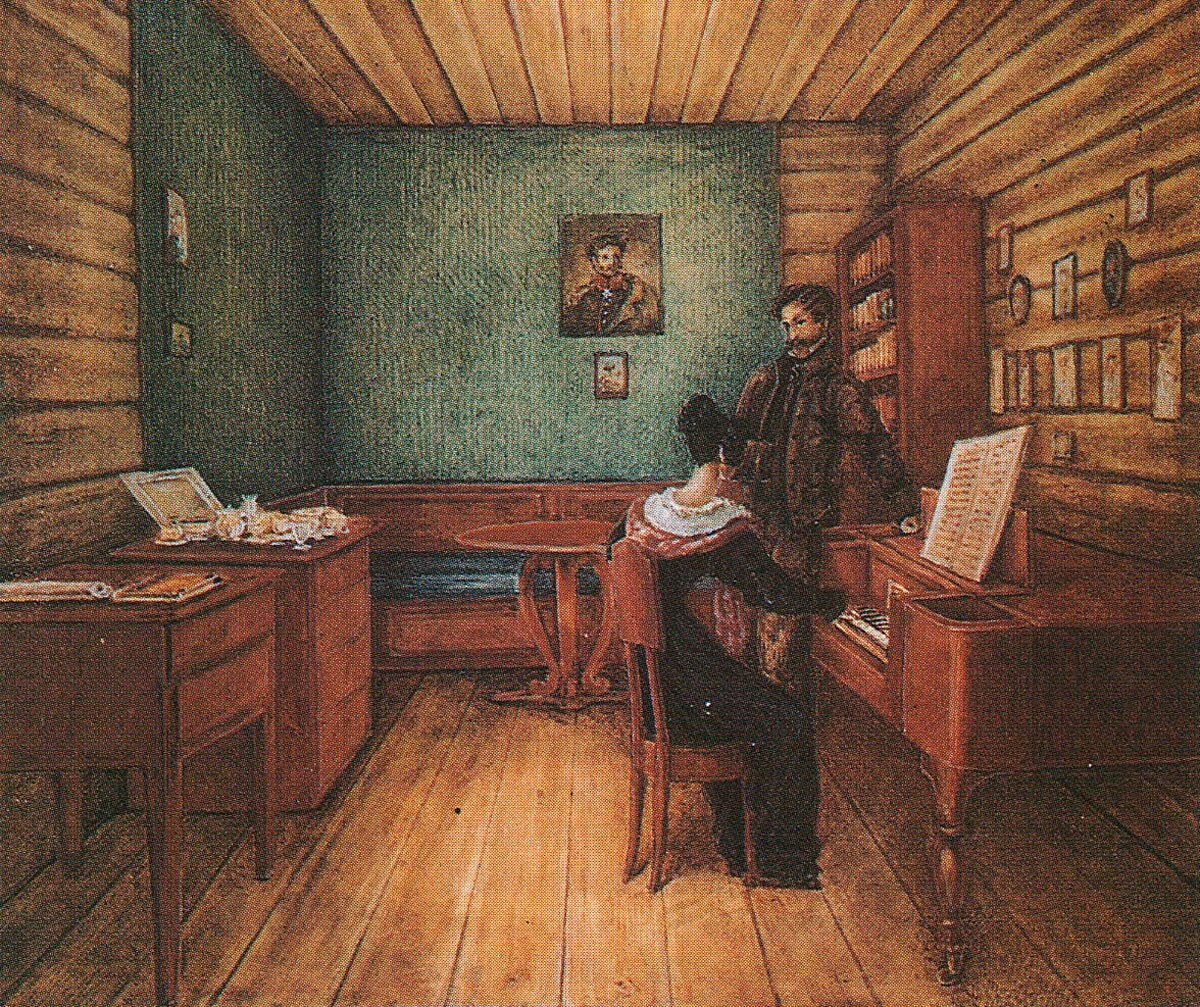 Nikolai Bestuzhev. Sergei Volkonsky with his wife in the cell assigned to him in the Petrovsky prison, 1830

The importance of civic poetry was subsequently recognized by other poets too, as there emerged a whole “Nekrasov school” of poets who opposed those who advocated “pure art”. Even some of the poets of the early 20th century, known as the “Silver Age of Russian poetry”, shared some of Nekrasov’s motifs and language, in particular Alexander Blok. The Bolsheviks were very fond of Nekrasov: Lenin called him “an old Russian democrat” and used his lines as epigraphs to his articles.

Nekrasov gave the last decade of his life to his main work, the poem ‘Who Can Be Happy and Free in Russia?’ He wrote it from 1865 until his death in 1878 and published it chapter by chapter in the ‘Sovremennik’ and ‘Otechestvennye Zapiski’ magazines, bypassing censorship.

In search of happiness

In terms of its structure, ‘Who Can Be Happy and Free in Russia?’ is not unlike an ancient epic with wandering heroes. It also has numerous elements of fairy tales and folklore. Nekrasov tried to speak on behalf of ordinary peasants and, for the first time, introduced the vernacular of common people into Russian literature.

In the poem, he also reflected his views on the abolition of serfdom, which took place in Russia in 1861 and which – in Nekrasov’s opinion - made the situation of peasants only worse, leaving them without land and any security and led to the decline of estates and villages, in general: “A great chain broke up, it broke up and hit with one end the master and with the other, the peasant.”

The poem begins with seven peasants from different villages having a heated argument as to who in Russia has a good life. Each of them has his own theory: one says a landowner, another says a civil servant. The other candidates for enjoying a happy life in Russia are a priest, a merchant, a boyar and, finally, the tsar. The seven peasants decide to travel across the country in search of happy people. But what does happiness consist of and will they be able to find it? The ending of the poem will take the reader by surprise.

The poem received mixed reviews when it was first published. Some contemporaries praised it for the breadth of its view of Russia, for the depth of its understanding and the relevance of the problems raised, comparing it to Nikolai Gogol’s novel ‘Dead Souls’. Others, however, criticized it for the unrealistic nature of its depictions and characterizations. In addition, critics could not understand how one and the same person could be such an ardent opponent of serfdom and, at the same time, regret its abolition.

But, it was precisely his opposition to serfdom that endeared Nekrasov to the Bolsheviks. Soviet literary critics praised Nekrasov for trying to get close to the common people and using their vernacular, as well as for his sympathy for the oppressed classes. In Soviet times, Nekrasov’s complete works were published and his poems became part of the school curriculum. He is taught at school to this day and his poem ‘Who Can Be Happy and Free in Russia?’ has become a source of numerous popular quotes and aphorisms. 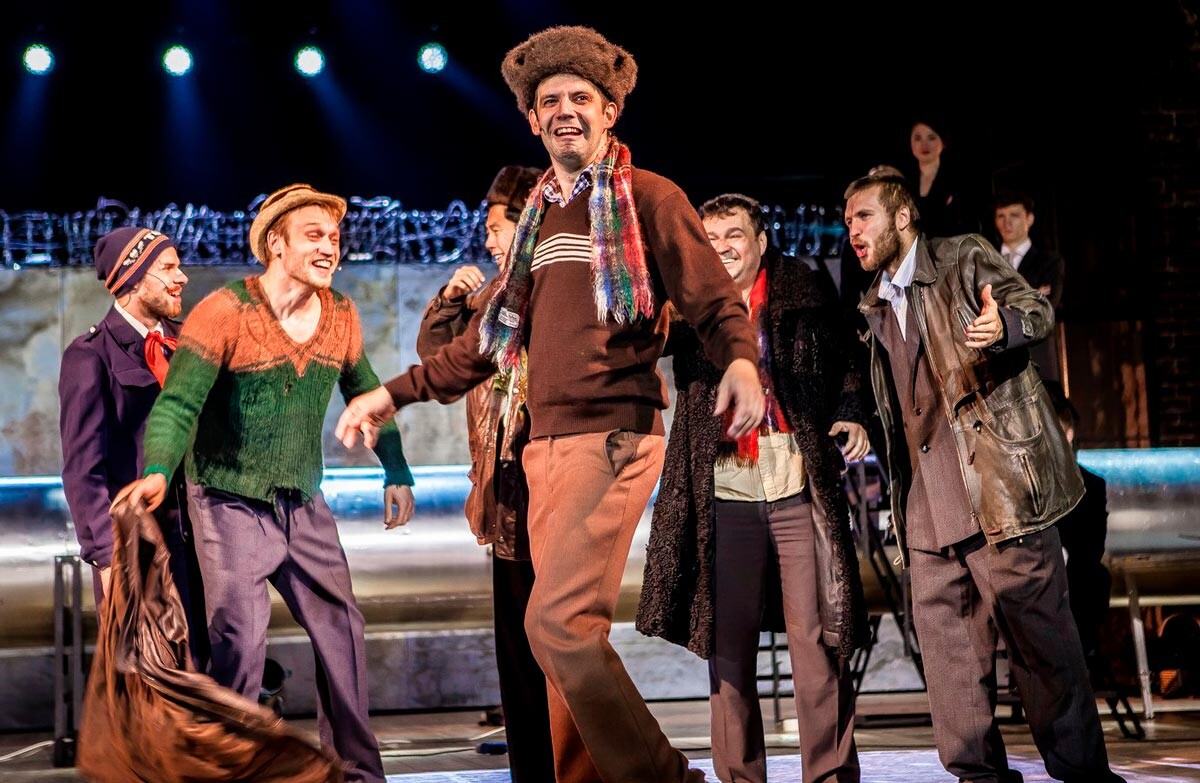 'Who Is Hap­py in Rus­sia?' theater performance

In 2015, famous director Kirill Serebrennikov turned this poem into a major theater production, demonstrating the timeless nature of this work and its continued relevance as capturing a certain deep-seated essence of the Russian people.