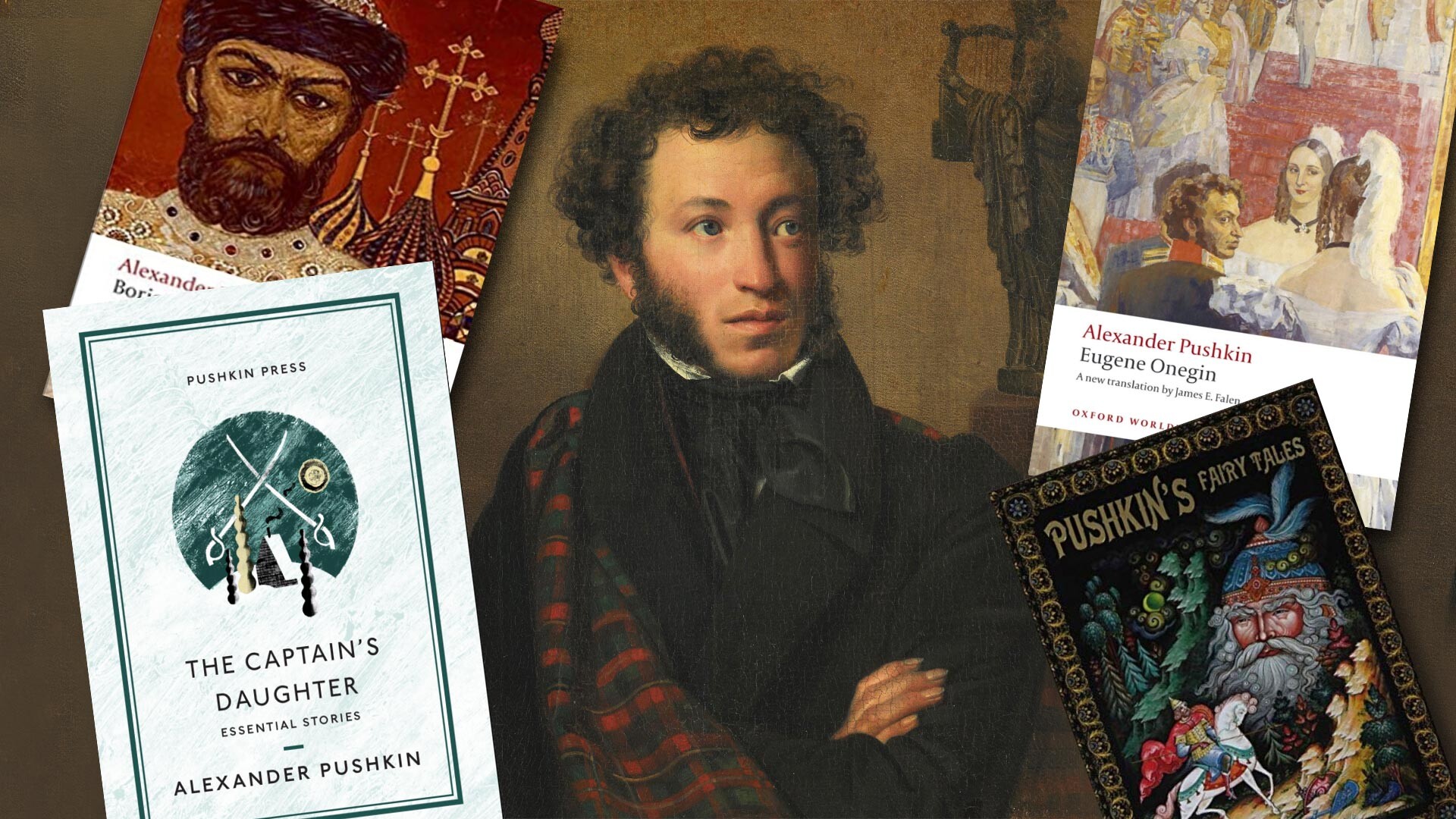 Russia Beyond (PICS: Orest Kiprensky/Tretyakov gallery; Medny Vsadnik Trading House Publishers; Oxford World's Classics; Pushkin Press)
If you manage to read his works and understand why Russians revere him, you will be able to penetrate into the depths of the Russian national character.

Alexander Sergeyevich Pushkin (1799-1837) lived for just 37 years at the very beginning of the 19th century. He was a rake, a free spirit, an admirer of beautiful women and considered by many to be the cleverest Russian man of his time. He managed not only to create the language in which the rest of the great Russian literature was later written, but also to author a number of truly brilliant works. Foreigners often struggle to fully appreciate their scale and depth, partly because Pushkin’s verse is practically impossible to translate (the result is either a faded or even vulgar copy of the original or a boring academic opus) and partly because Pushkin’s wisdom and the problems that worried him are so deeply rooted in Russian mentality and require it to be fully understood. But do give his work a try! 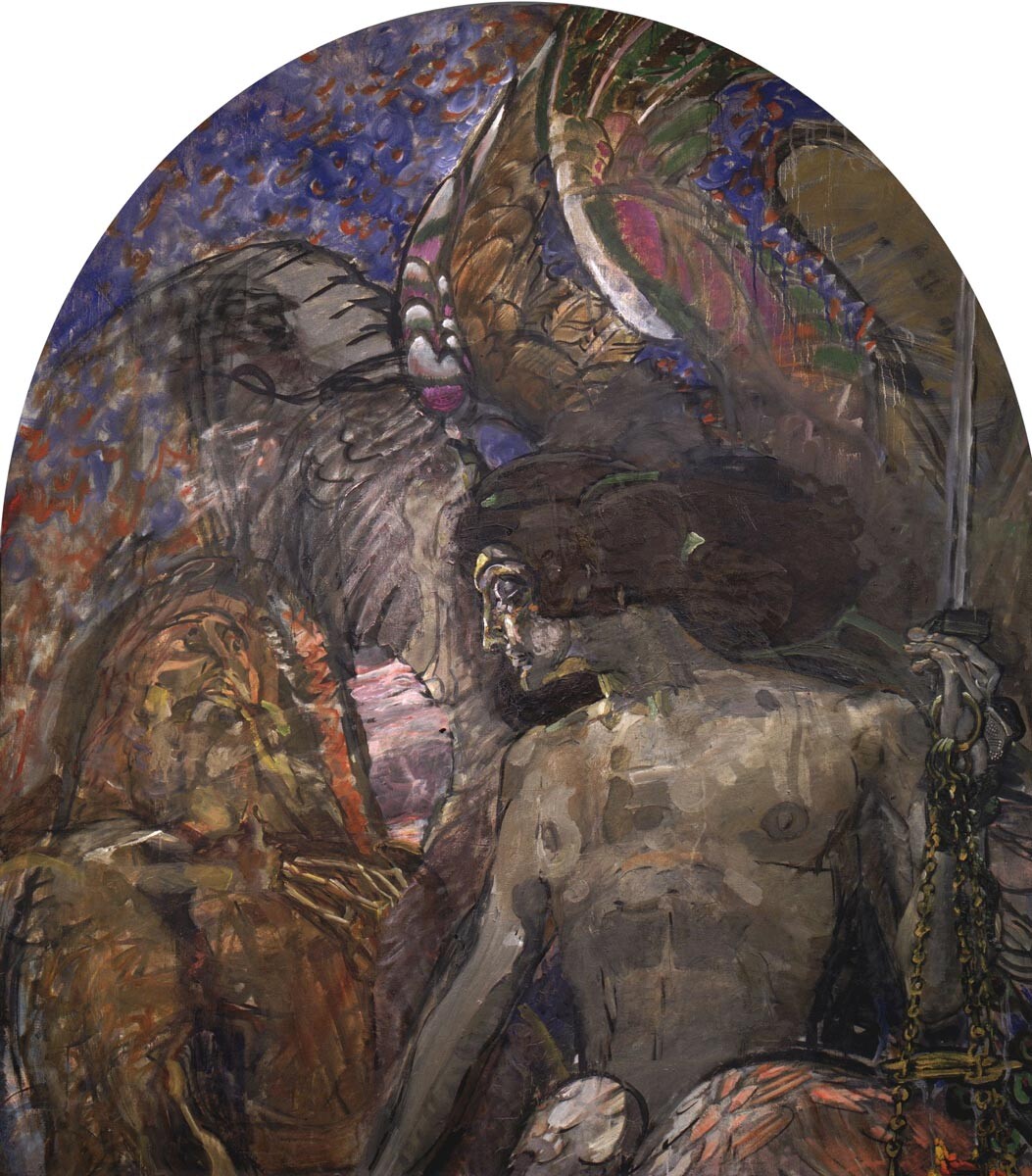 Russia’s foremost poet wrote about 360 poems. He began to compose as a child (his older contemporaries recalled the transformation that happened to the boy at the age of 11).

One of the best love poems written in Russian is Pushkin’s To*** (“I remember a wonderful moment”, 1825), By the way, it has been translated into 210 languages. The Prophet (1826) is a powerful biblical interpretation of the purpose of poetry.

Autumn (1833) describes Pushkin’s favorite season in Russia, which invariably brought him inspiration and injected him with creative energy. Recollection (1828) is a poem of incredible depth about a night of remorse for everything one has done in one’s life. In the poem The Poet (1827), Pushkin lets the reader into his creative “laboratory” and shows how one can be a genius and an ordinary person at the same time. While in the poem From Pindemonte (1836), Pushkin shares with us his cherished secret of freedom and happiness, which is still relevant today. Finally, in No hands have wrought my monument (1836) he reflects on and sums up his work. 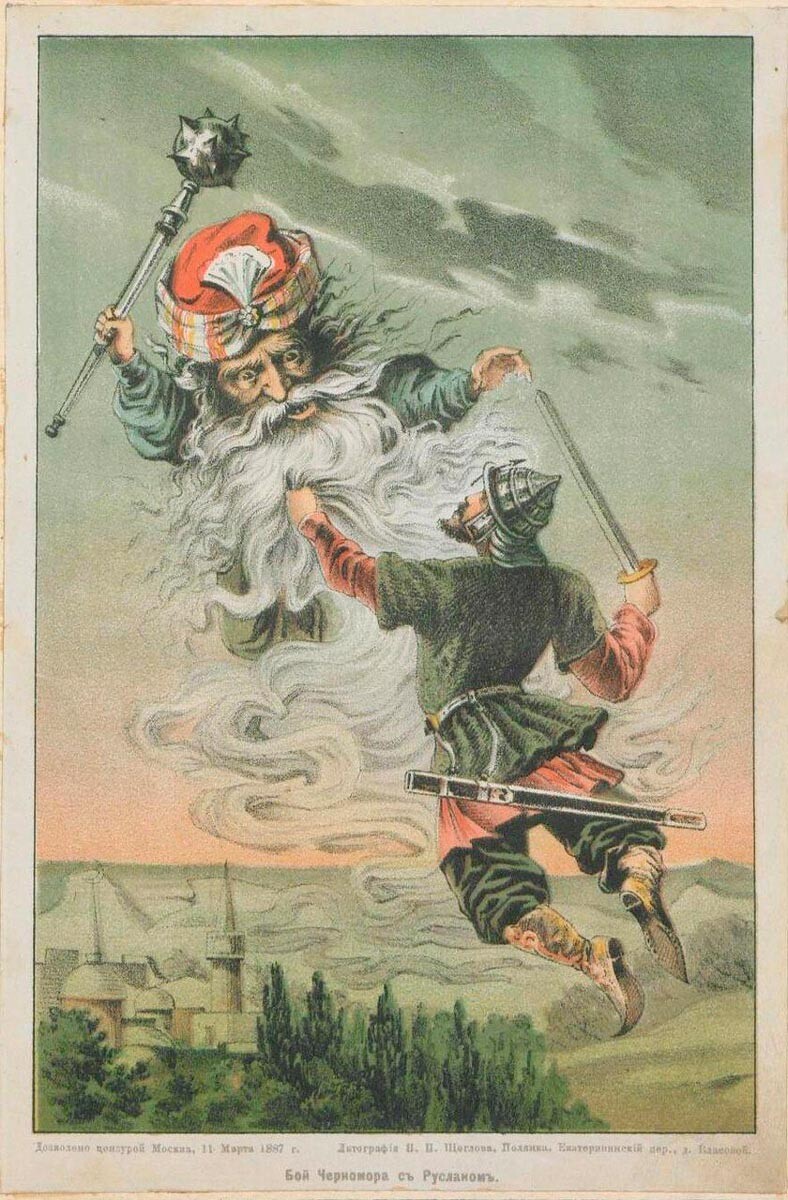 Every child in Russia knows the beginning of this fairy tale in verse by heart – the bit about the green oak near Lukomorye, with the learned cat walking around it and the mermaid sitting in its branches. Pushkin wrote his first long poem inspired by folklore, immersing the reader in a magical world, where the insidious sorcerer Chernomor kidnaps the beautiful Lyudmila and the hero Ruslan sets off to rescue her. In 1841, Mikhail Glinka composed his famous opera Ruslan and Lyudmila based on Pushkin’s poem. 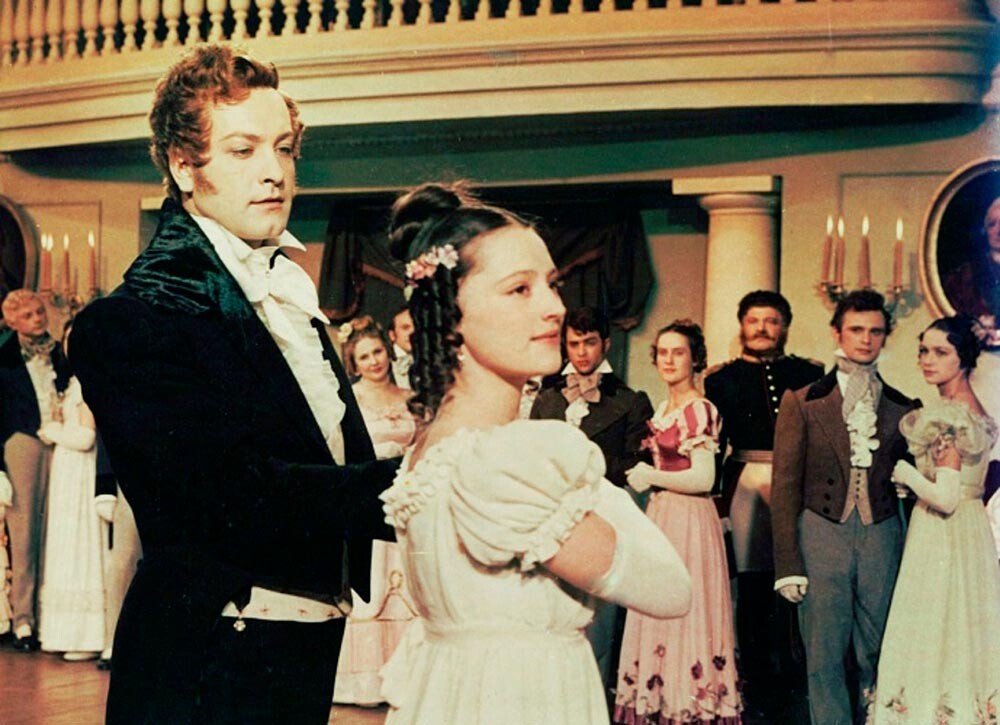 This novel in verse is considered not only the pinnacle of Pushkin’s oeuvre, but also an “encyclopedia of Russian life”. A young well-educated aristocrat, Onegin, travels from the capital to his country estate, where he becomes bored and seeks a diversion, when suddenly he finds himself a character in a tragedy and a melodrama. His neighbors’ daughter Tatyana falls in love with him (Tatyana’s love letter is arguably the best declaration of love in Russian literature), but, for some reason, he decides to flirt with her sister Olga, as a result of which his best friend challenges Onegin to a duel...

This work is extremely difficult to translate, since it is written in a special verse form invented by Pushkin, known as the ‘Onegin stanza’, with a clear structure and rhyme order. But it did find another life that made it known all over the world – as an opera by Pyotr Tchaikovsky, which he composed in 1877-78. 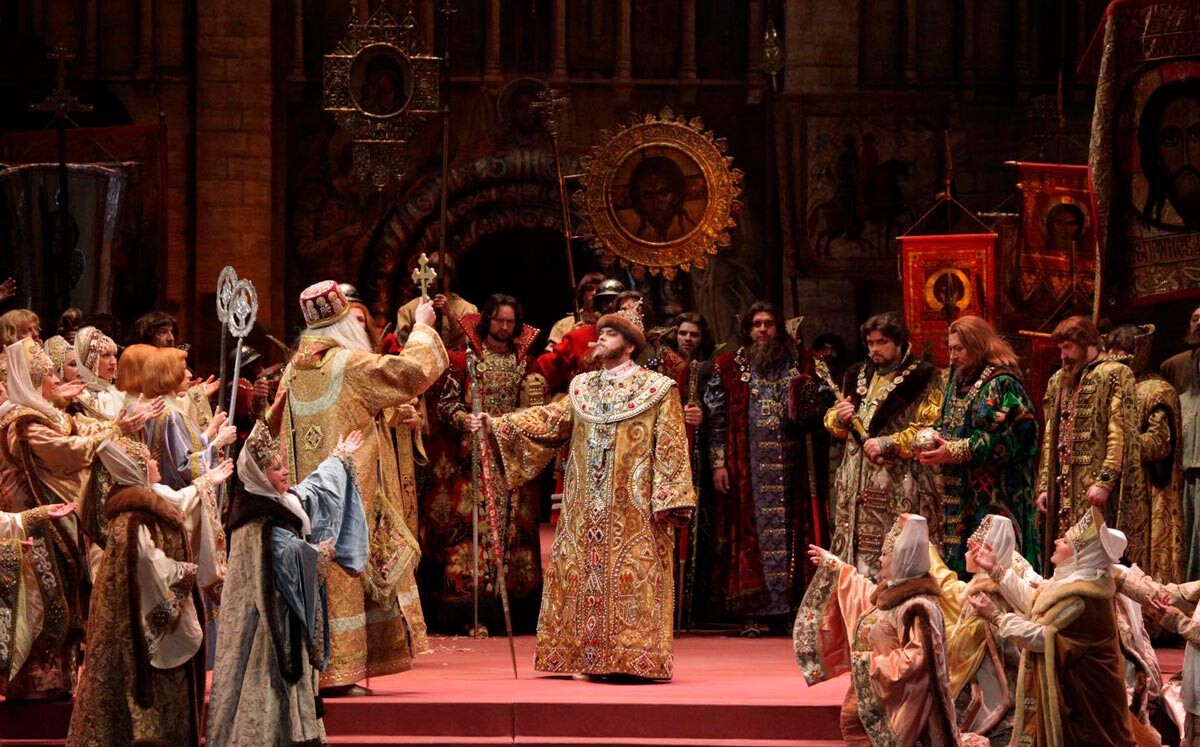 This tragedy in verse centers around one of the most mysterious pages in Russian history - the murder of Tsarevich Dmitry, the last heir to the Rurik dynasty. There was a rumor that his murder was ordered by Boris Godunov, to enable the latter to take the throne himself...

There were clear parallels between this historical play and the time in which Pushkin lived. He wrote Boris Godunov while in exile for his free-thinking poetry, during the Decembrist Revolt, which he felt keenly and which involved many of his friends. At the same time, its reflections make this early 19th century very relevant for modern Russia, too.

In 1869, Modest Mussorgsky composed an opera based on Pushkin’s tragedy. The play was staged many times in different theaters and was also adapted for the screen. 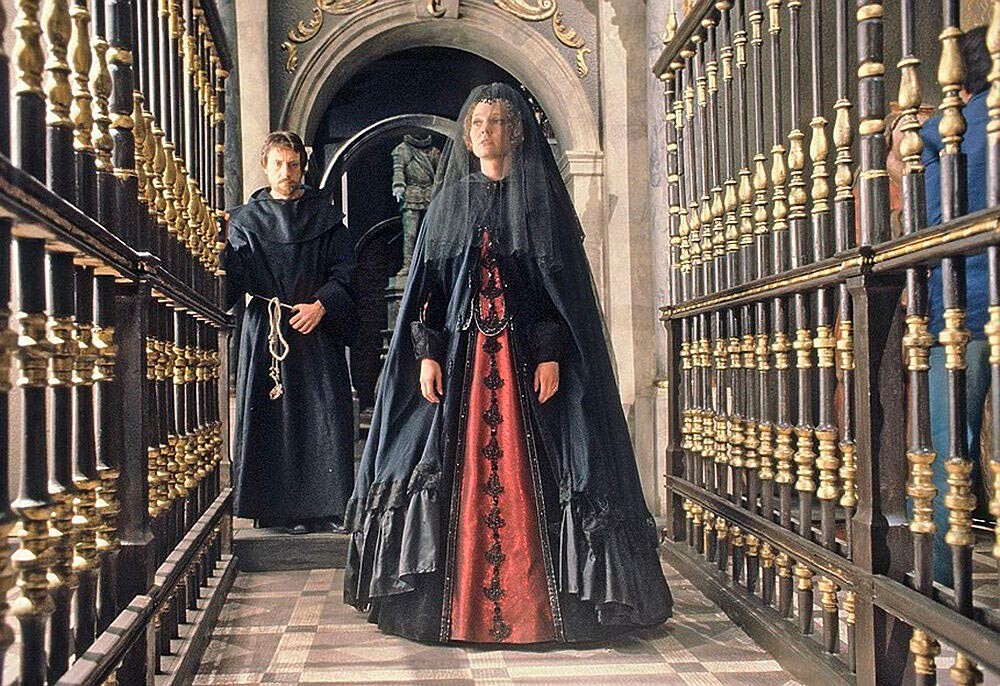 A still from 'Little Tragedies' series

Continuing his experiments with writing for the stage, while locked in cholera quarantine at his Boldino estate, Pushkin wrote a cycle of four small plays in verse, The Covetous Knight, Mozart and Salieri, The Stone Guest and Feast in Time of the Plague. In them, the poet explored human passions and presented the characters (and the reader) with tough moral choices.

All the plays together and separately were often staged in the theater and adapted for the screen. 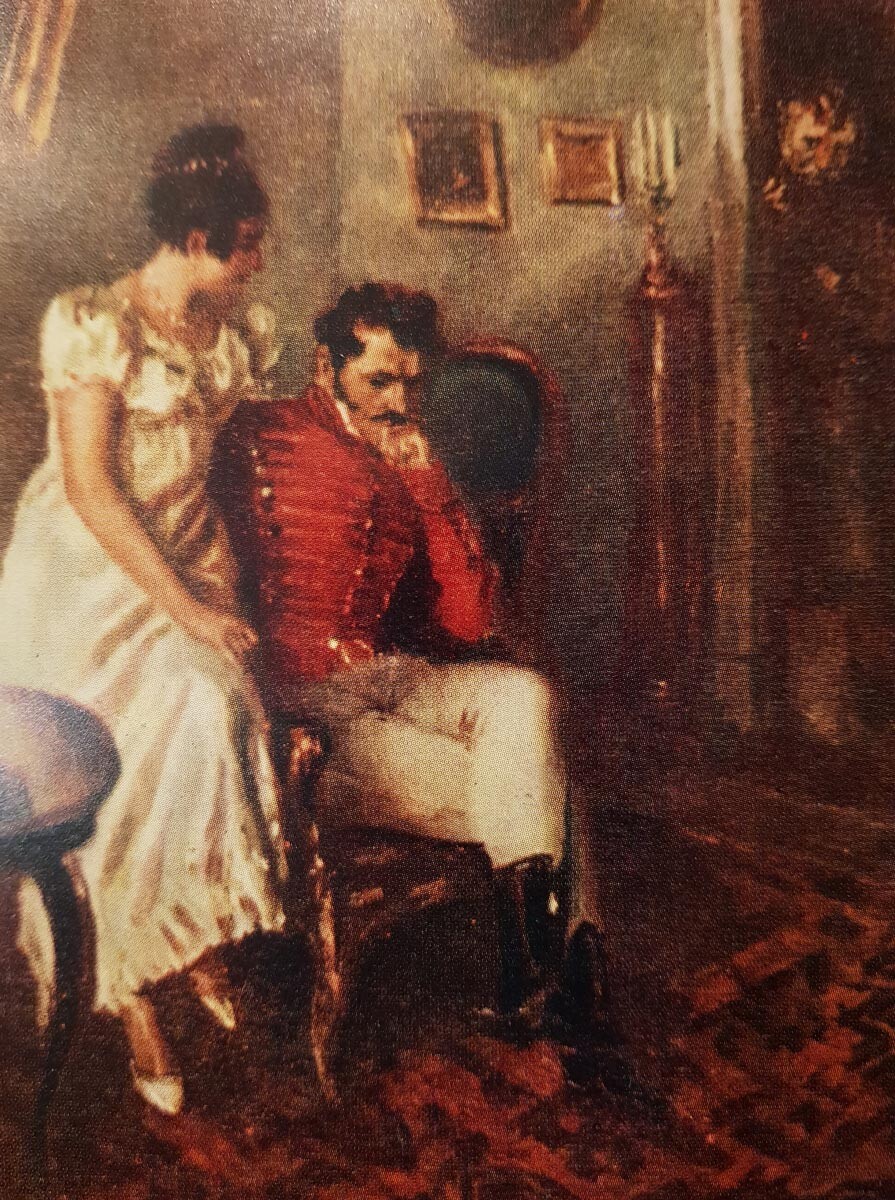 Belkin’s Tales is a collection of five gripping novellas. It includes a sentimental story about a young noblewoman, who dresses up as a peasant woman to meet a handsome neighbor, while there is a feud between their fathers. And a romantic story about a duel in which one of the participants decided to postpone his shot and invites his opponent to return to the duel after a few years. And an incredible story about an officer who gets married by accident… 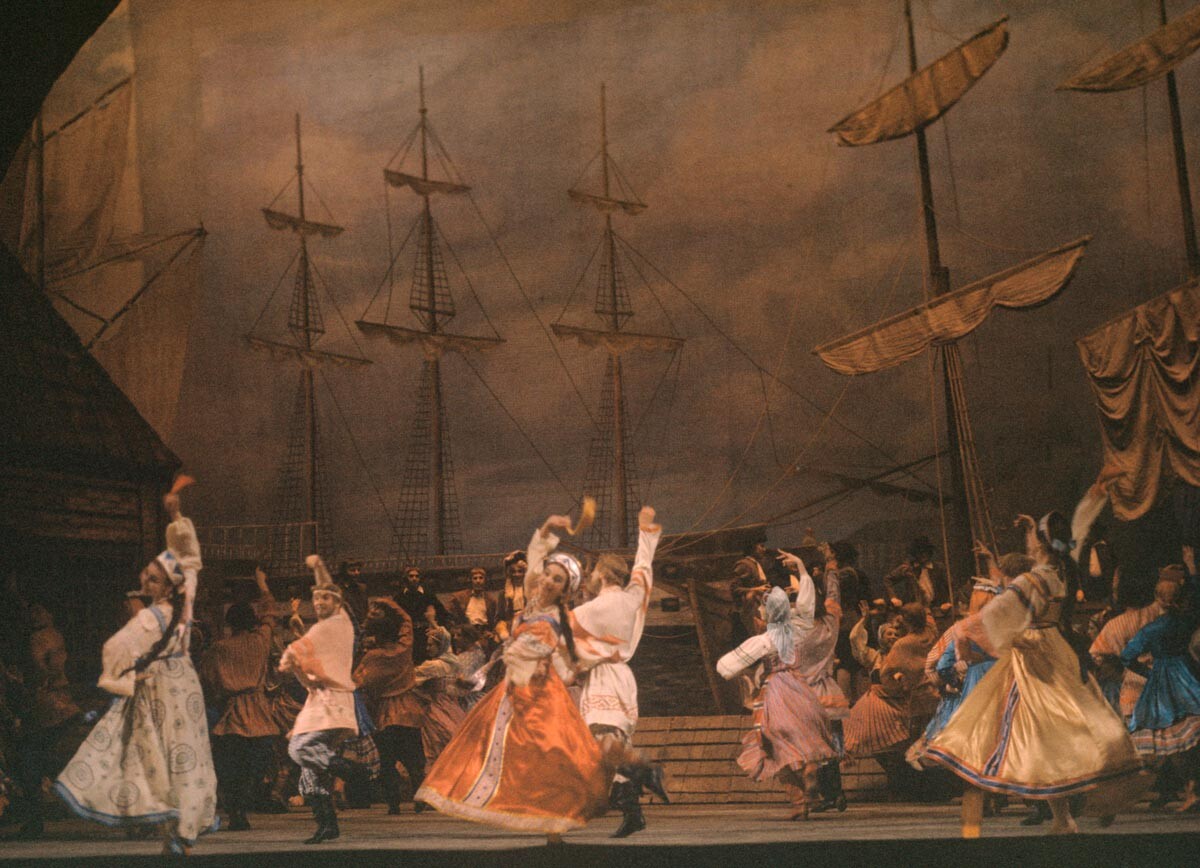 'The Bronze Horseman' ballet at the Kirov [now Mariinsky] Theatre, 1966

This novella in verse is a real celebration of St. Petersburg. “I love you, Peter’s creation,” is one of the most famous quotes from the work. The title of the story gave the nickname to the equestrian monument to Peter I, which became the symbol of the city.

The plot, however, revolves around a sad story - Pushkin describes a devastating flood that hit the city in 1824. 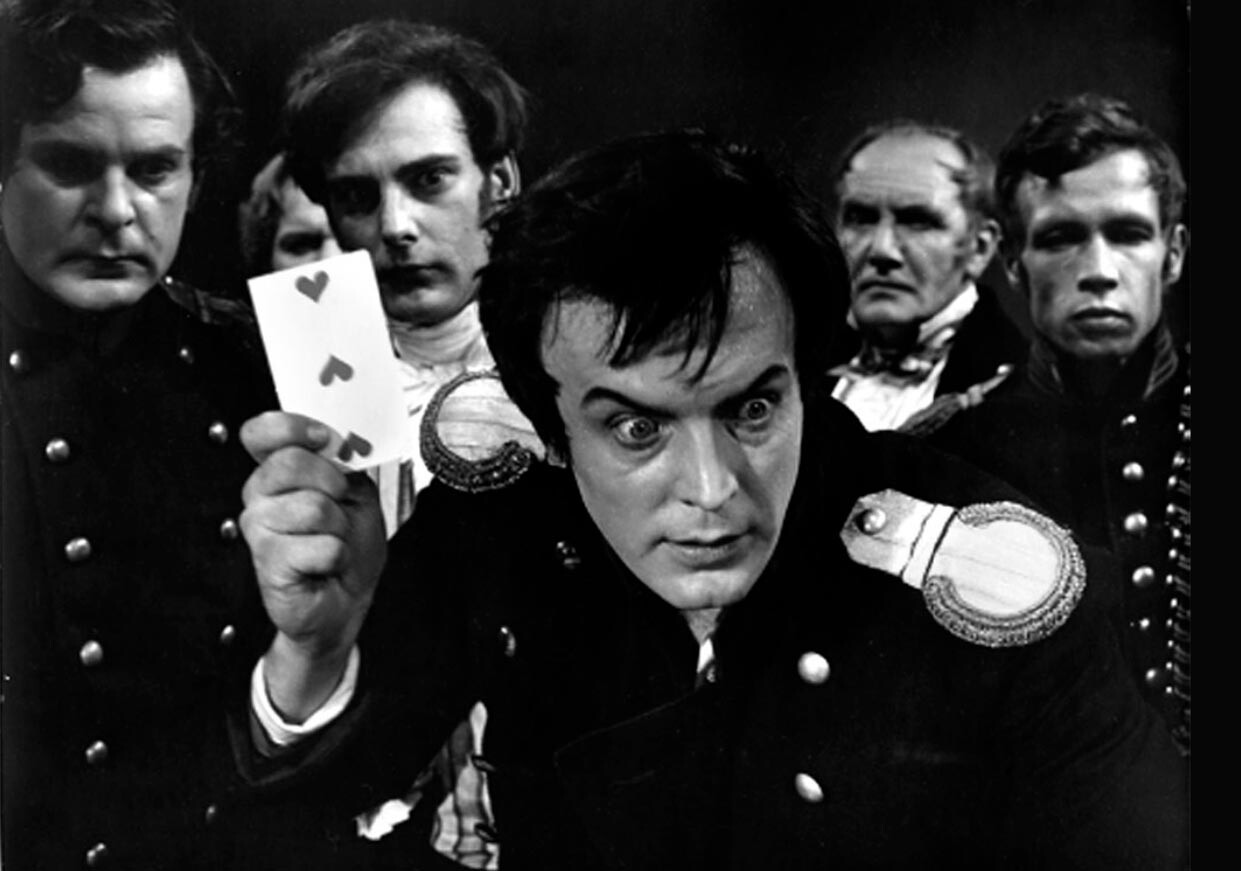 A still from 'The Queen of Spades' movie

This is a story about how gambling can drive a person crazy. In order to find out a secret winning combination of cards, young Hermann enters an old countess’s bedroom - she dies of fright and her ghost begins to appear to the protagonist, repeating the card combination: “Three, seven, ace...”

The work was a great success in Europe and Pyotr Tchaikovsky wrote an opera of the same name based on it. 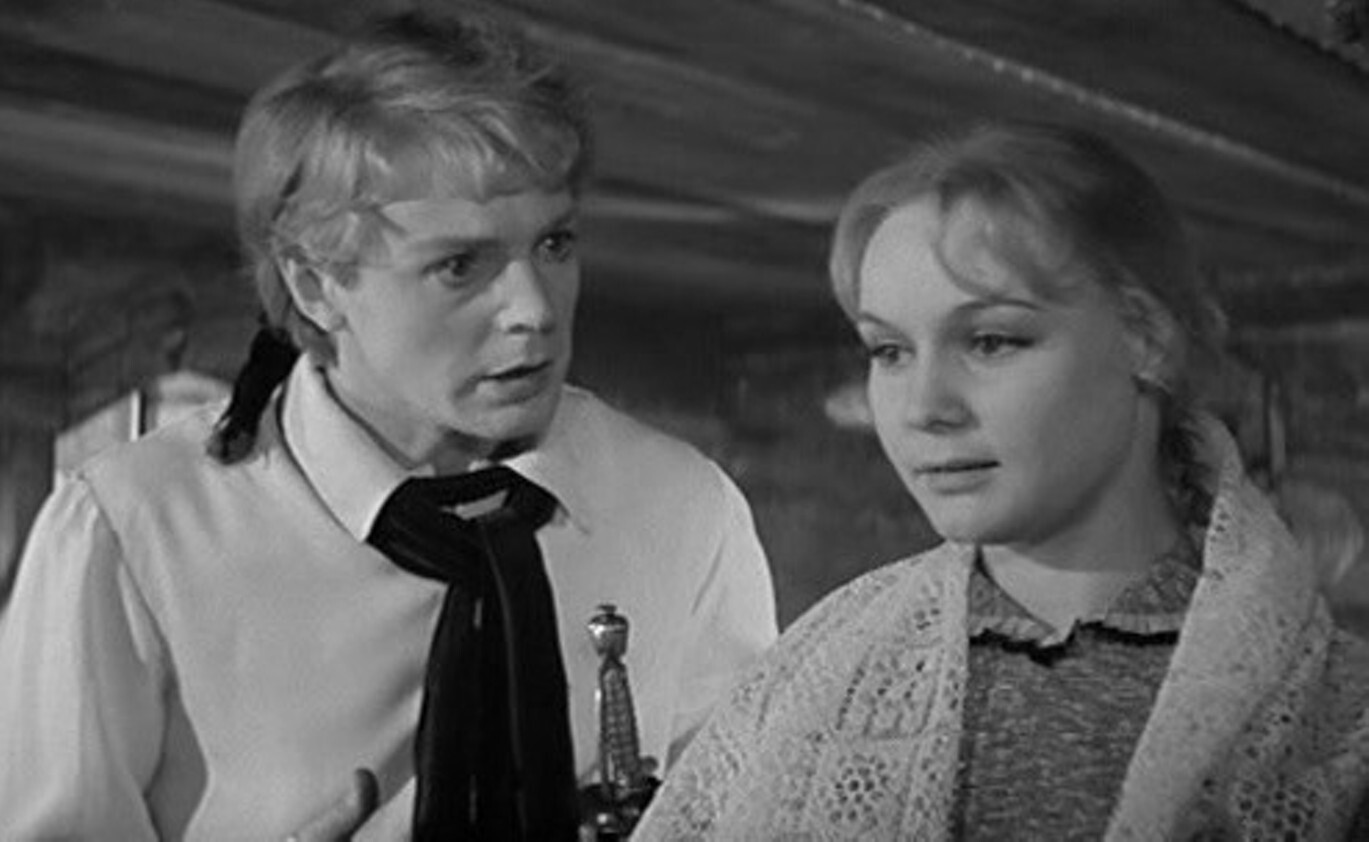 A still from 'The Captain's Daugther' movie

This is a novel about Yemelyan Pugachev’s peasant rebellion, which swept across nearly the whole of Russia in the 18th century. But, above all, this is a story about honor, noble duty and love, as Russian people understand them to this day.

This novel is worth reading if only for the quote that has become an aphorism: “God save us from seeing a Russian revolt, senseless and merciless.” Pushkin was extremely interested in Yemelyan Pugachev’s personality and, in addition to the novel, he also wrote the historical monograph The History of the Pugachev Rebellion. 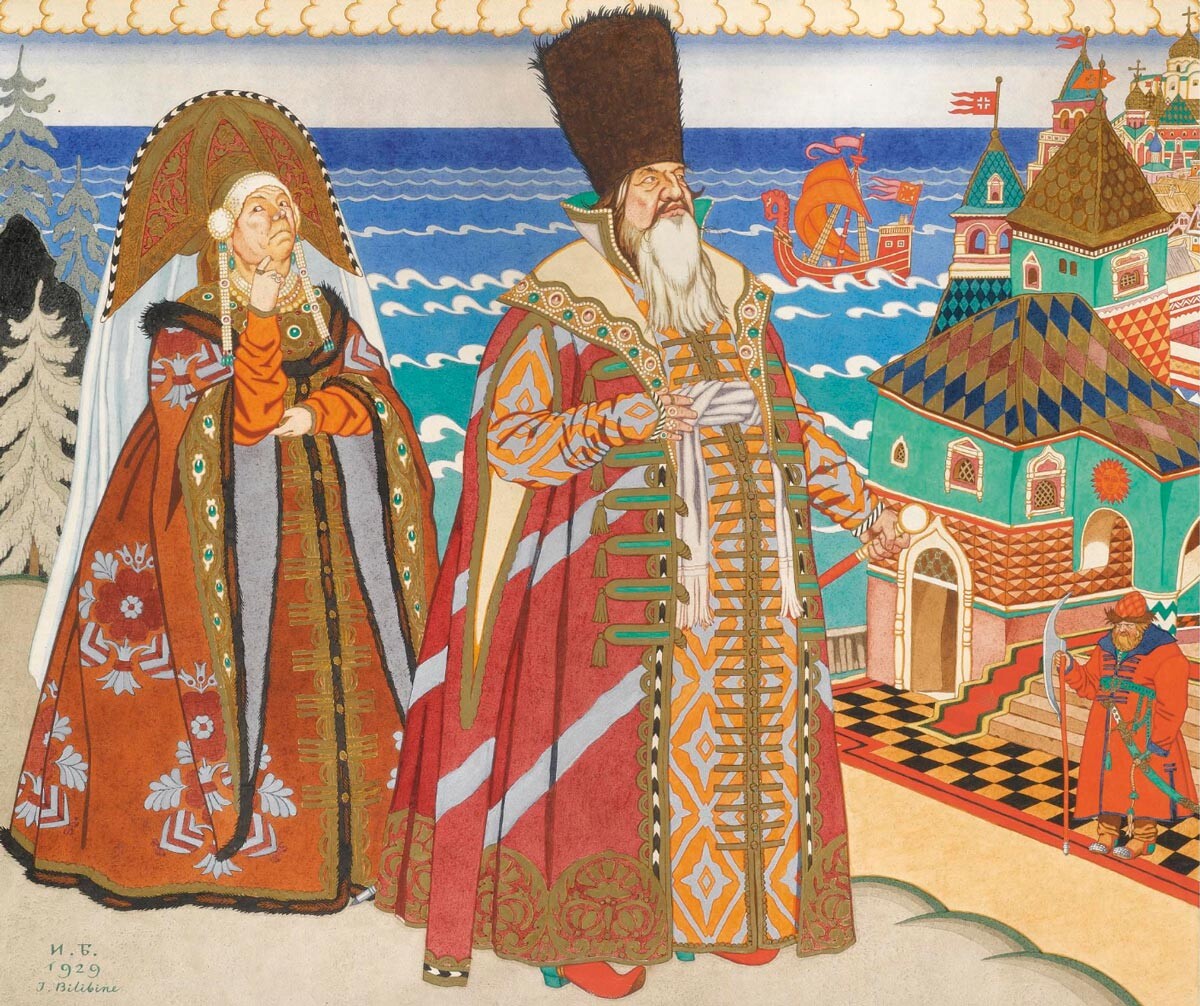 Ivan Bilibin. Illustration for 'The Tale of Tsar Saltan'

It would be hard to find a Russian child who is unfamiliar with Pushkin’s amazing fairy tales in verse. In his light and picturesque style, the poet retold folktales that he had heard from his beloved nanny Arina Rodionovna. The best-known of them are: The Tale of the Fisherman and the Fish, in which Pushkin reflects on the measure of our desires, The Tale of Tsar Saltan and The Tale of the Dead Princess and the Seven Knights.