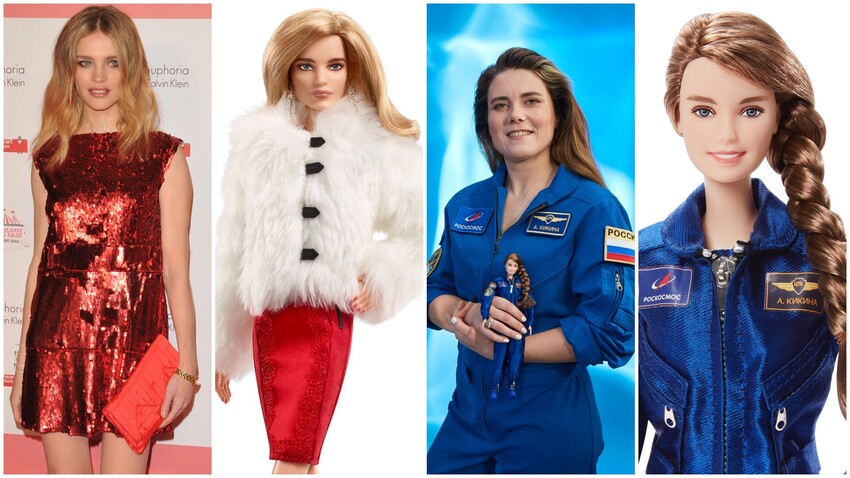 Legion Media; Mattel
They say a Barbie doll speaks the universal language of hope and romance and symbolizes the idea of success. She is defiantly beautiful and sexy, making other women jealous of her fame, femininity and longevity, not to mention her long legs and great figure.

Several Russian women have had Barbie dolls made in their image, as part of Mattel’s global effort to inspire young girls to build a successful future. In 2019, Barbie, the world’s most popular doll, celebrated its 60th birthday. 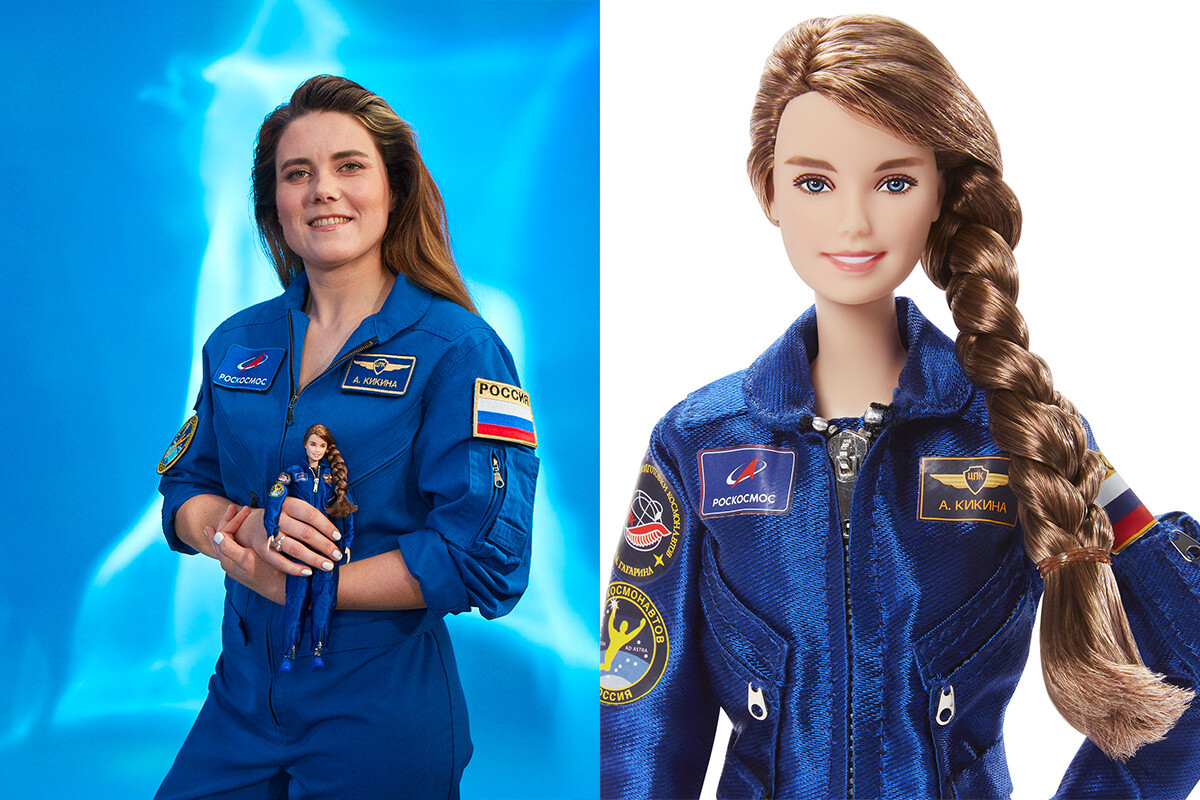 Anna Kikina didn’t dream of becoming an astronaut when she was a kid. But here she is, the only female cosmonaut in the entire male dominant squadron of Russia’s space agency Roscosmos! Although Anna has no practical experience of flying into space yet, in November 2017, she took part in the international experiment ‘Sirius’, simulating a flight to the Moon. When she isn’t training, the 37-year-old is busy polishing her skills at rafting and skydiving.

The doll, representing Kikina, was unveiled in 2021. It comes with a dark navy flight suit and in a spacewalk suit.

Kikina is not the first Russian cosmonaut to have a Barbie doll made in her likeness. In 1965, the company made a toy of Valentina Tereshkova, the world’s first woman to go into space on 16 June, 1963. 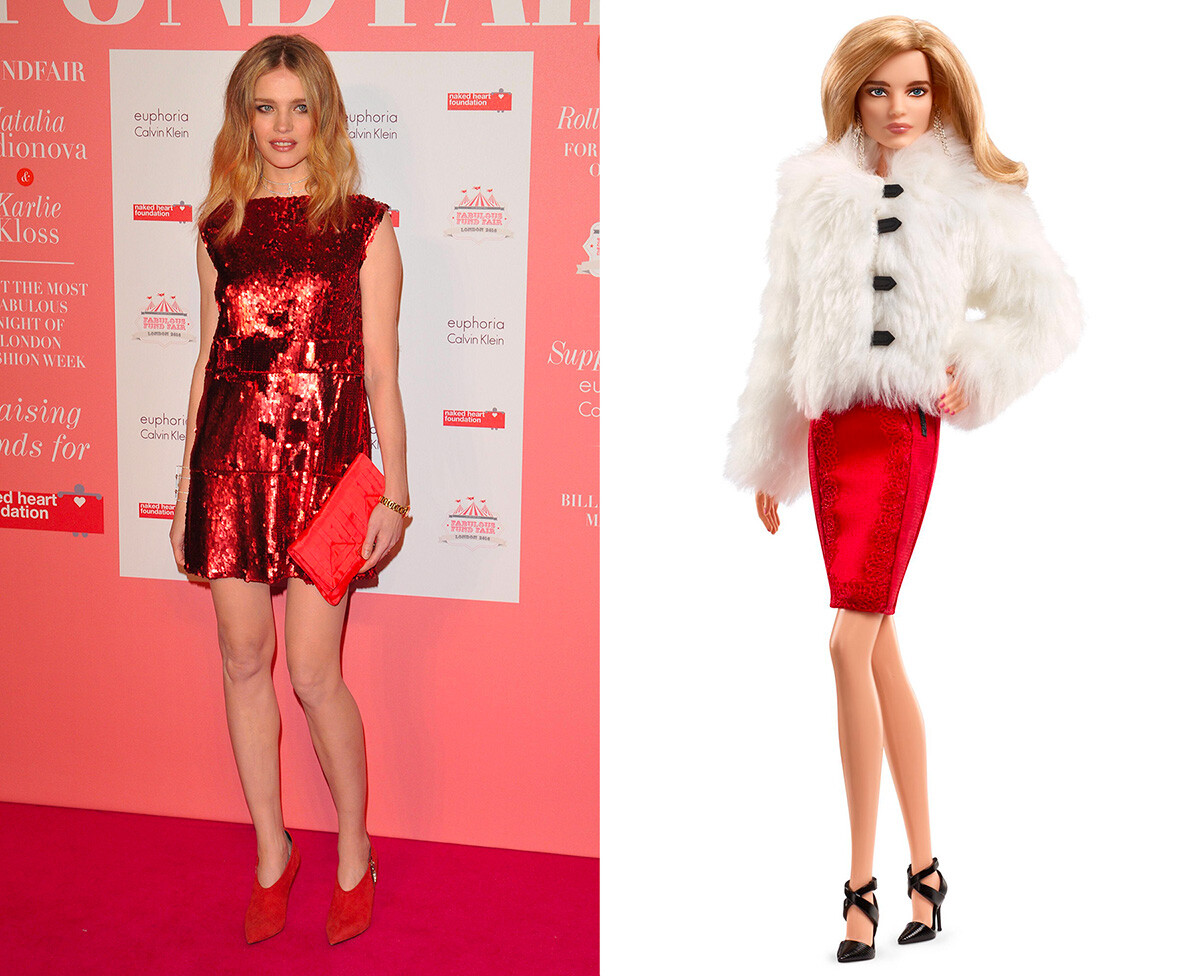 A supermodel, an actress, a philanthropist and a mother of five, Natalia Vodianova (also known by the nickname ‘Supernova’) is the epitome of beauty, elegance and care. Her Naked Hearts charity foundation helped build numerous playgrounds in Russia to provide a safe environment for children. It’s top priority these days to build an inclusive society open to people with disabilities and special needs. Natalia, who grew up in poverty in Nizhny Novgorod and fought for a place in the sun, knows firsthand how important it is for a little girl to dream. She once sold fruit on the street as a child to help her working-class family make both ends meet. Her life has been a classic Cinderella story, with Natalia rising from the poverty and despair to la crème de la crème of French chic (Vodianova’s second husband, after her ten-year marriage to English aristocrat Justin Portman, is Frenchman Antoine Arnault, the son of LVMH founder Bernard Arnault).

Natalia, the lookalike Barbie doll, released in 2017, features a white faux fur coat and a red cocktail dress and is modeled after Vodianova’s signature stunning looks. 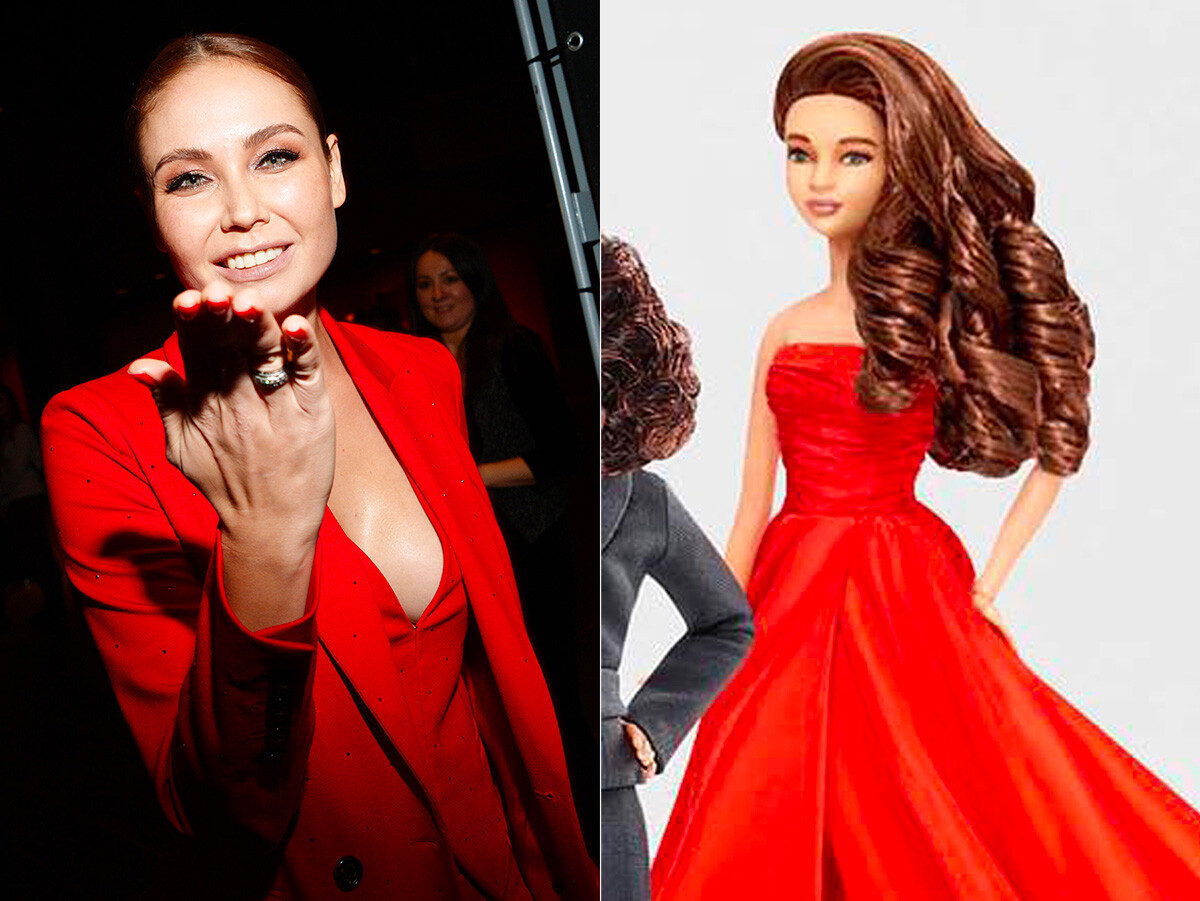 Not many gymnasts can boast about having exclusive elements named after them. Russia’s Liasan made her name as one of the most technically gifted gymnasts of all time. Despite being a two-time Grand Prix Final all-around medalist, Utiasheva was forced to pull out of the 2008 Beijing Olympics, due to a severe leg injury, and end her career in sport. The good news is, there’s clearly steel in Liasan’s character, as she managed to turn over a new leaf and embarked on a successful TV career. The former gymnast became the hostess of a TV reality show called ‘The Dances’, which became so popular in Russia it stretched into seven seasons.

The Barbie doll, modeled after Liasan Utiasheva and released in 2019, has long walnut hair, beautiful brown eyes and could be a perfect illustration to Chris de Burgh’s 1986 hit song ‘The Lady in Red’. The doll is dressed to impress in a strikingly beautiful red evening gown. 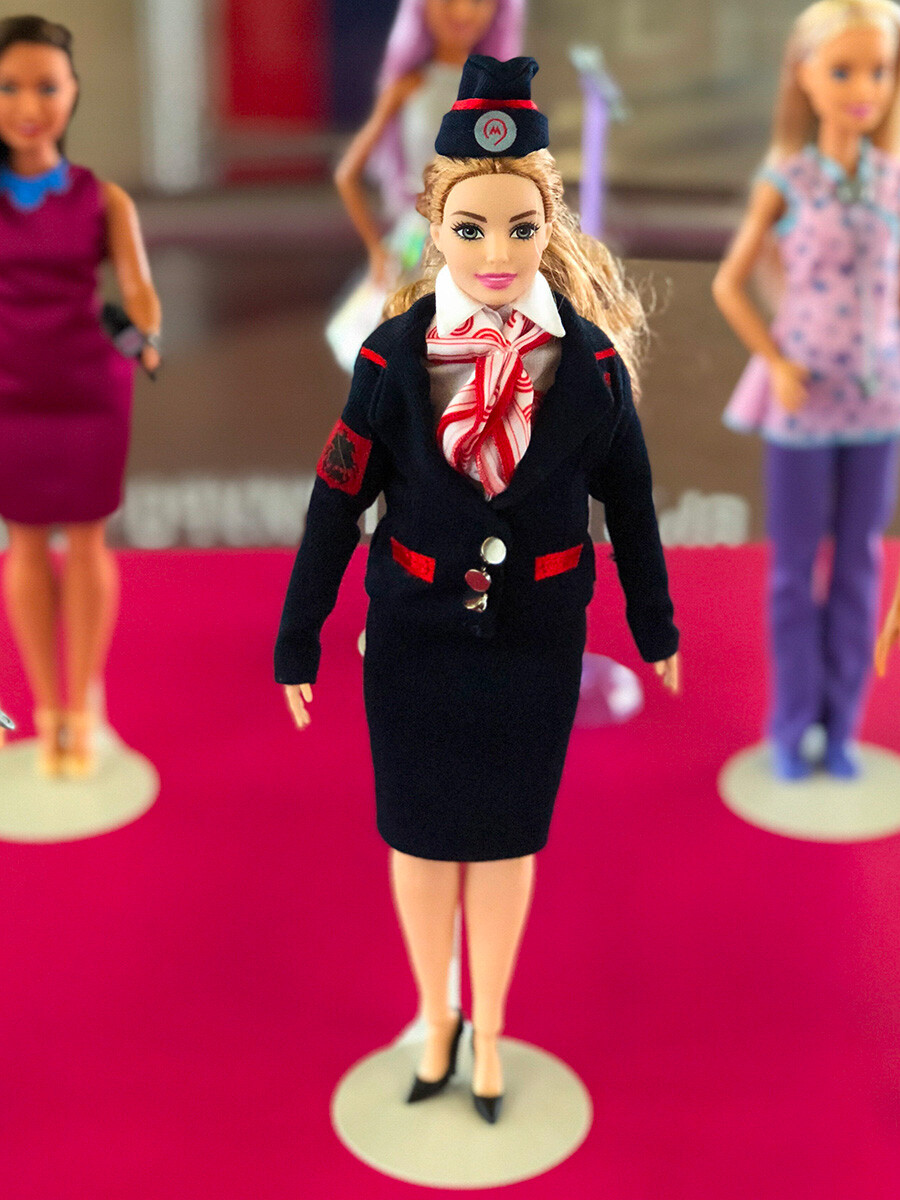 The cars we drive say a lot about us, even more so if it’s not a car, but an electric train. While some still believe train driving is reserved for men only, women have proven they can do pretty much everything regular men can do! The first women electric train drivers hit the tracks of the Moscow Metro in 2021, after a decades-old ban was finally reversed in the Russian capital. To celebrate the occasion, metro-branded Barbie dolls were produced the same year.

The doll is dressed in a dark blue blazer, a pencil skirt and a stylish hat with the distinctive Moscow Metro logo.

“You can be what you want to be,” the slogan, written on the top of each box, says. At the end of the day, it doesn’t really matter who is behind the wheel of a train, as long as it’s not running behind schedule. 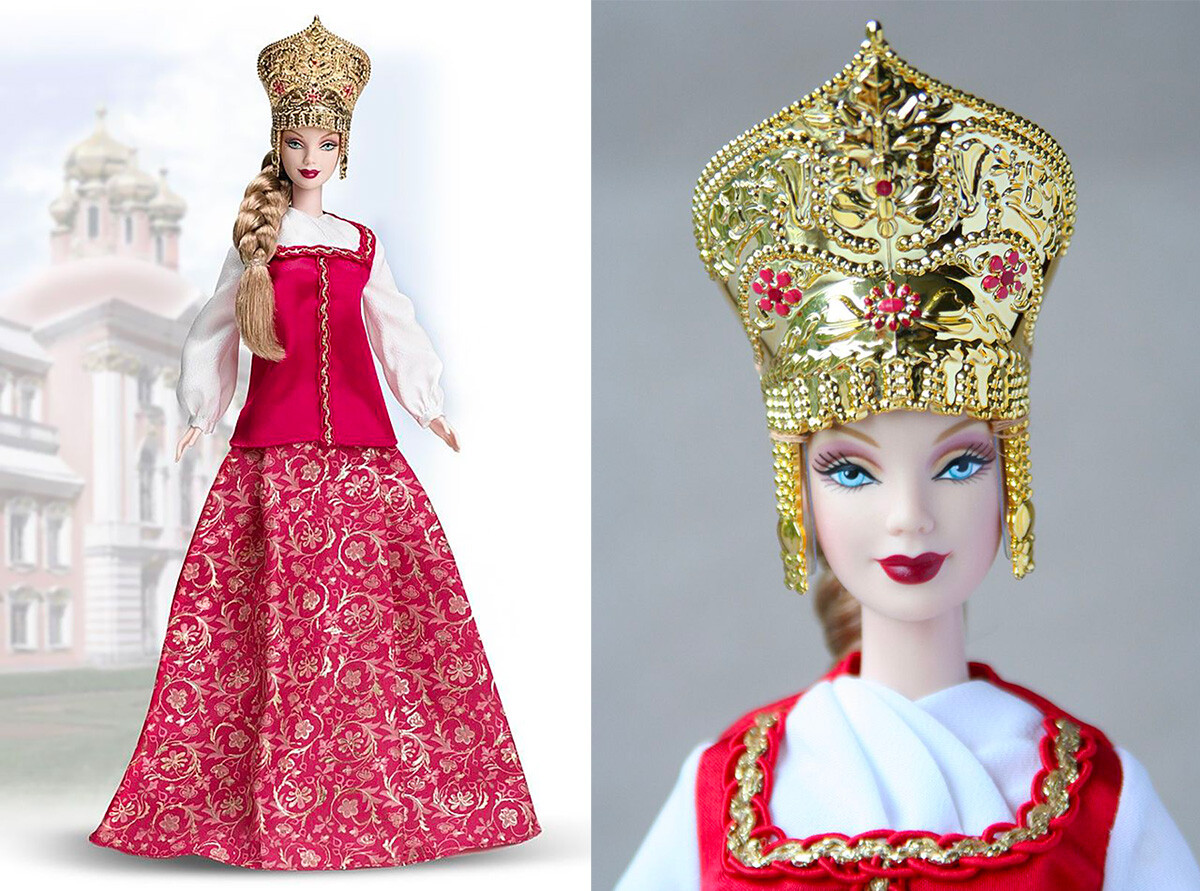 A Russian woman can be as fussy as a fancy princess. Bearing that in mind, in 2005, the Mattel toy company created a doll designed to encourage younger girls to know more about Russian culture and history.

Wearing her hair in a braid, the doll has it all, including a dress, a pair of boots and a crown. Although her attire might not be historically accurate for an imperial princess (the doll is wearing a dress that is more appropriate for a peasant girl!), the toy is, nonetheless, a great addition to the ‘Dolls of the World’ collection.