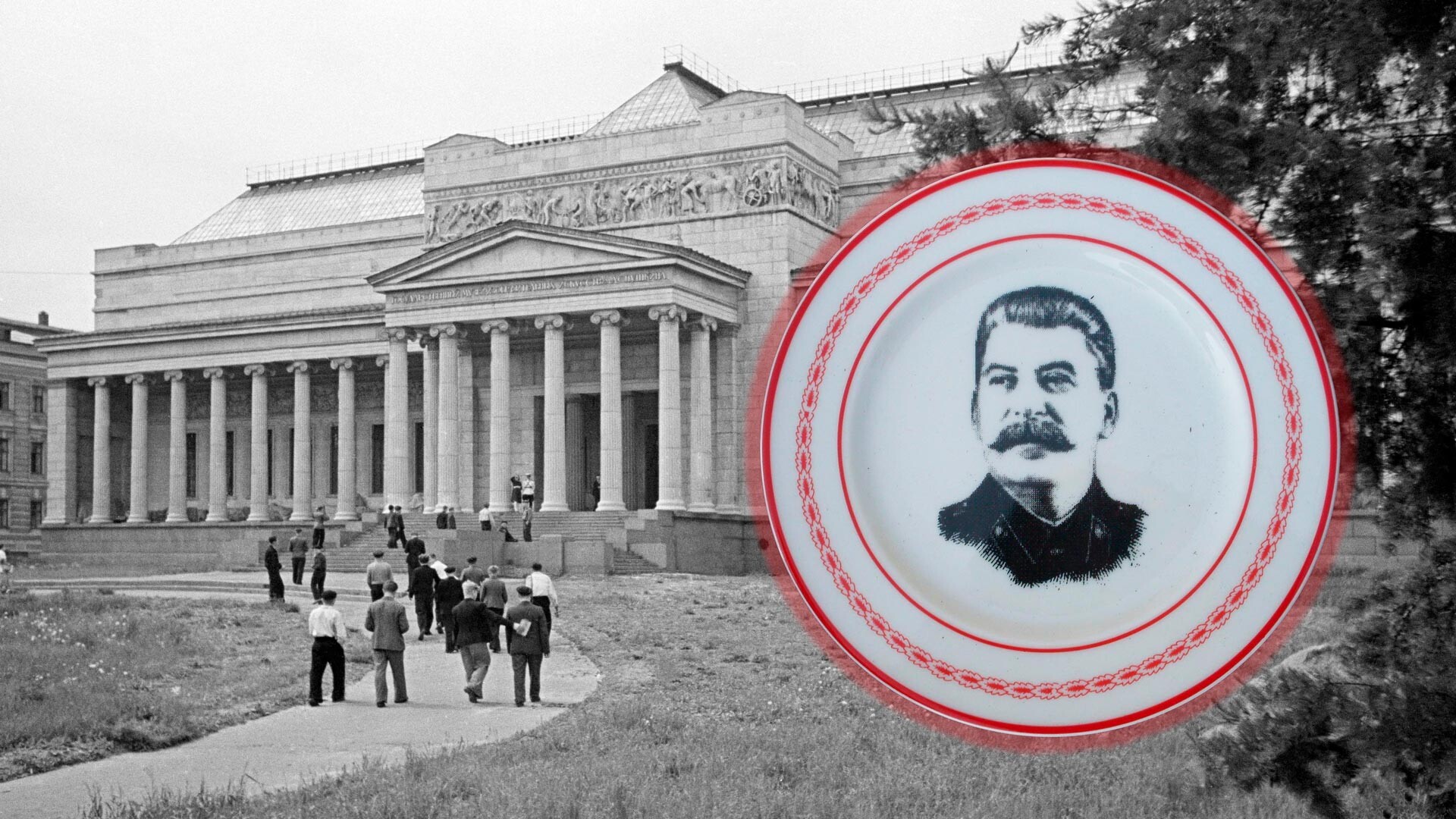 Russia Beyond (Anatoly Garanin/ Sputnik; Public Domain)
Masterpieces of world art were removed from display and sent to storage, while the huge museum halls housed gifts that Stalin received from devoted miners, friendly communist countries and many other admirers.

The Pushkin State Museum of Fine Arts in Moscow is one of Russia’s largest collections of world art. However, it almost closed and became a museum dedicated to Joseph Stalin. This happened in the late 1940s when a display of gifts to the Soviet leader was organized within the museum’s walls, replacing the biggest part of the exposition. Unlike other temporary exhibitions, the duration of this one was not specified.

During World War II, many of the museum's items were evacuated. A bomb hit the roof and many of the halls suffered from a lack of central heating. But already in 1946 when all the artistic treasures returned, the museum was fully restored and opened to the public. 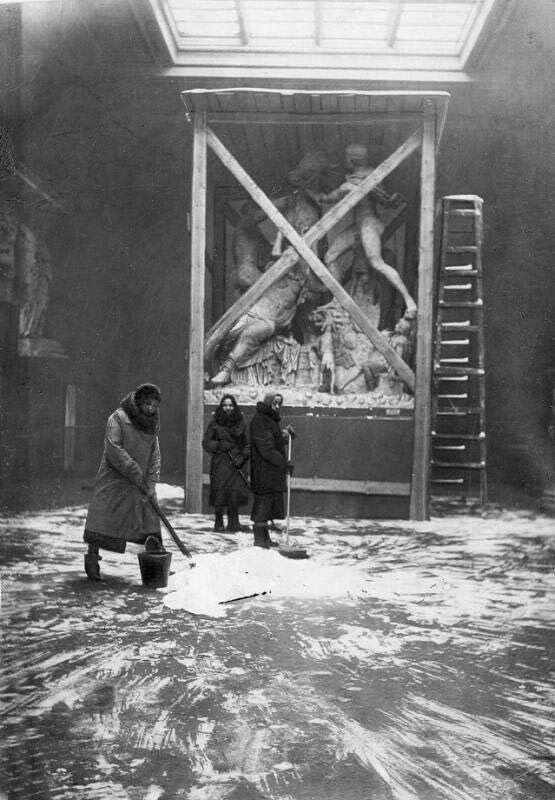 After the War, the Pushkin Museum became a type of ark for art - a vast number of trophy items from Germany were brought here; ranging from paintings and tapestries to furniture, ceramics, and sculptures, especially masterpieces from the collection of the Dresden Art Museum.

Then, in 1948, as a result of the fight against 'cosmopolitanism' the Soviet authorities closed the nearby Museum of New Western Art, and a part of its collection was given to the Pushkin Museum. This collection consisted of priceless masterpieces that had been gathered before the Russian Revolution by the famous merchants Sergei Shchukin and Ivan Morozov, among which were paintings by the Impressionists, Post-Impressionists, and Modernists,such as Claude Monet and Renoir, as well as Matisse and Picasso. These "decadent" works were put in storage without any chance to be exhibited. 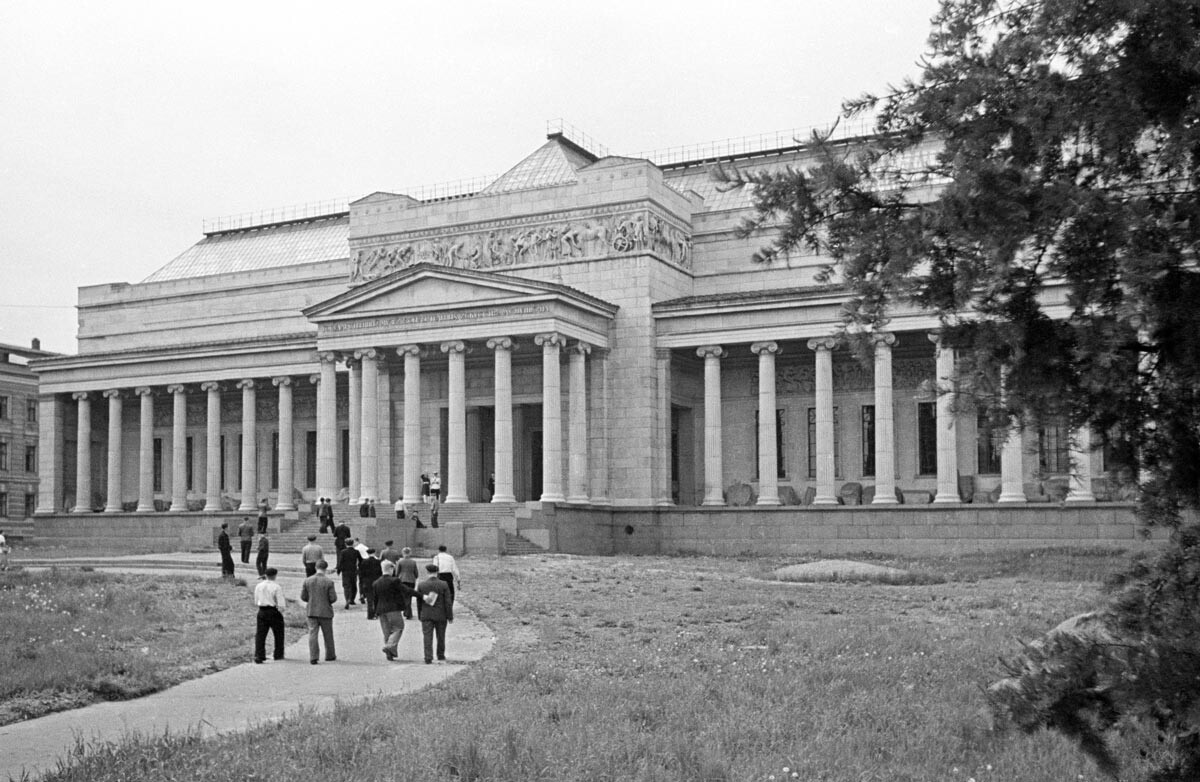 Thanks to the war booty, the museum could hardly cope with such an overflow of treasures, and it was literally stuffed with all sorts of art works. The museum workers didn't have time to conduct a comprehensive inventory, and many items were jammed in the storerooms. Some unaccounted-for paintings by Western masters were even sent to decorate state offices. World War II trophy furniture was sometimes used for functional purposes in science departments and other offices. 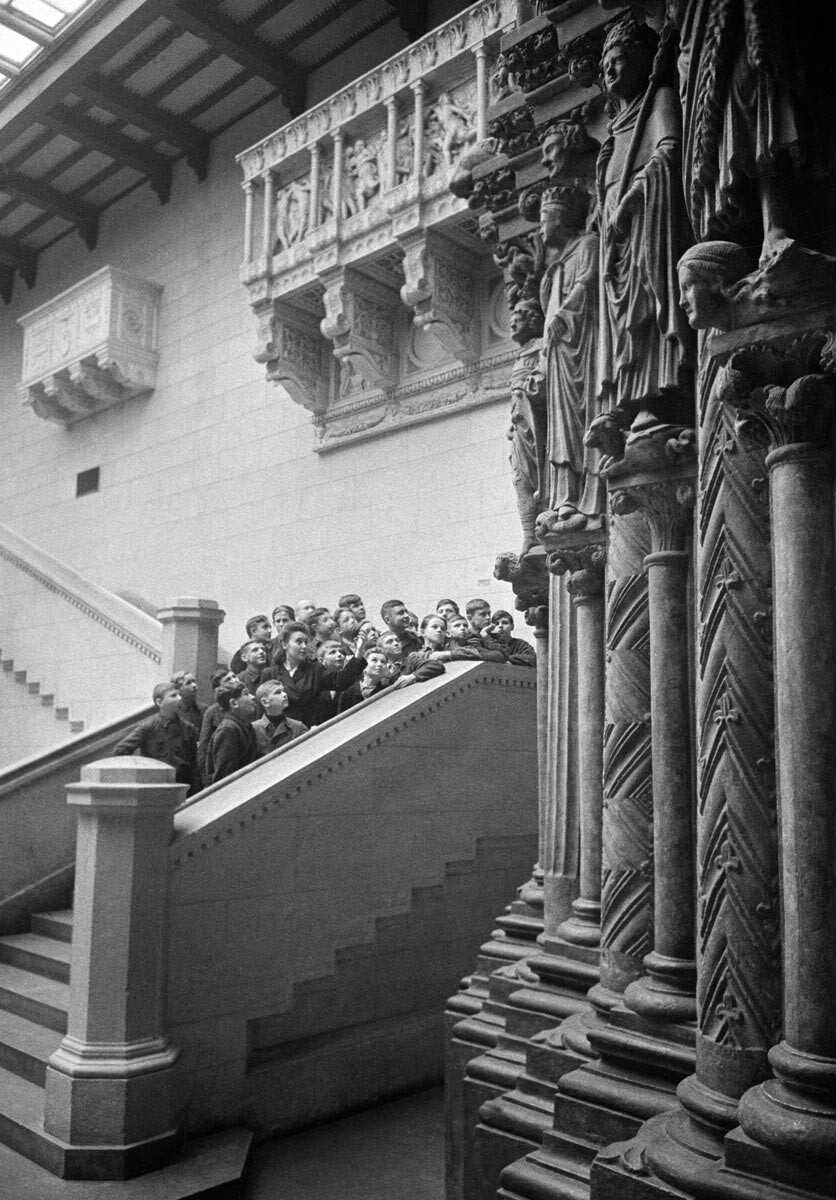 Suddenly, in 1949, a government commission arrived at the museum to organize an exhibition of gifts to Joseph Stalin, marking his 70th birthday. Many museum employees were forced to be involved. But firstly, 30 museum workers were fired because they didn't pass the state security organs’ background inspection.

Polite, but insistent, men in uniform began to clean out the central halls of the museum, and in just over two days about 1500 items from 12 halls were removed. Paintings by French, Dutch, Italian and other Western masters were put into storage, as well as the pearl of the museum, the famous sculptural and architectural casts of antiquity.

Many years later, Alexei Petukhov, a senior researcher at the Pushkin Museum, eventually found museum workers who worked on this project. In particular, one of the employees recalled how she and her colleague came to the empty hall that once housed Italian art, and they both started crying with helplessness.

In the record time of just one week, the plywood constructions for the Stalin gift exhibition were installed. The classical portico in the museum was covered by a giant portrait of the Soviet leader. Ironically, the room behind it stored Picasso's masterpieces, which had no chance of ever seeing the light of day. At the same time, the exhibition was constructed in violation of fire safety standards: there were piles of easily inflammable objects and fabrics, the aisles were blocked, and the electrical system was overloaded.

A museum inside the museum 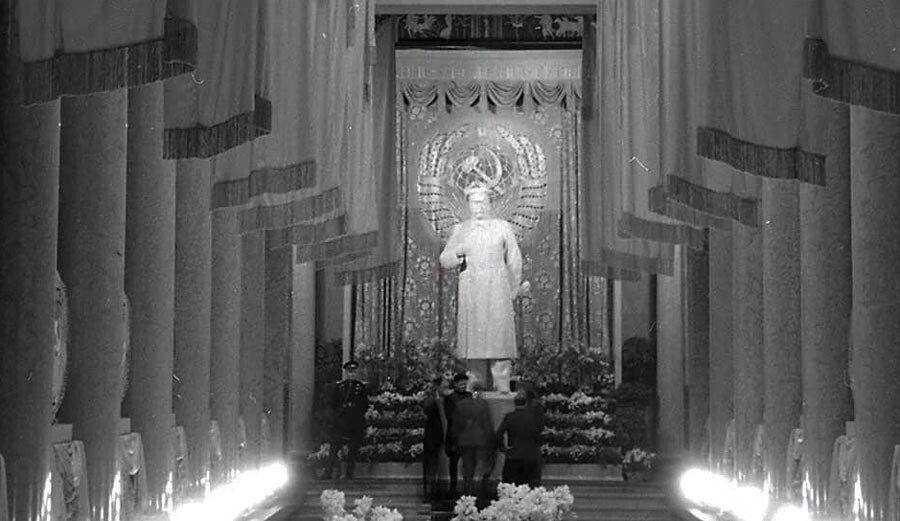 A central hall of the exhibition

This exhibition seemed to have everything: carpets and panels with embroidered figures of Stalin and his leading comrades, about 1000 statues of the leader, including sculptures carved from anthracite by the miners of Silesia. There were also vases, textiles, porcelain, and even candy and sweets from communists from all over the world (many already had worms, but no one dared to throw away the sweet tributes to Stalin). 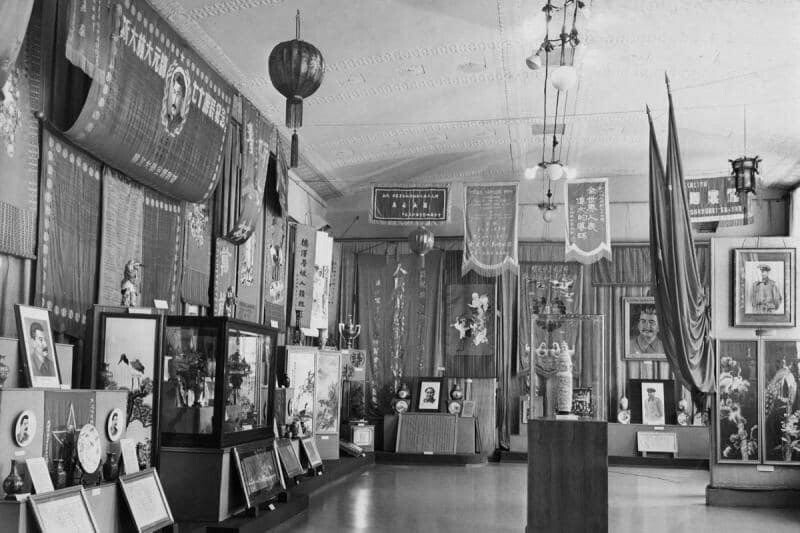 A hall featuring gifts from China

While speaking with Petukhov, Olga Nikityuk, an employee during those times, recalled that serious experts of Western art had to give guided tours about Stalin's portraits made on rice grains, coal, and metal. The text of the tour was approved by the Kremlin organizers and had to be learnt by heart. Not the slightest deviation was possible - everything was strictly monitored and one could be fired for the slightest infraction.

In addition, the museum staff had to keep perfect order and they trembled when the sliding table with a set of glasses, donated by Czechoslovakia, had some defect. 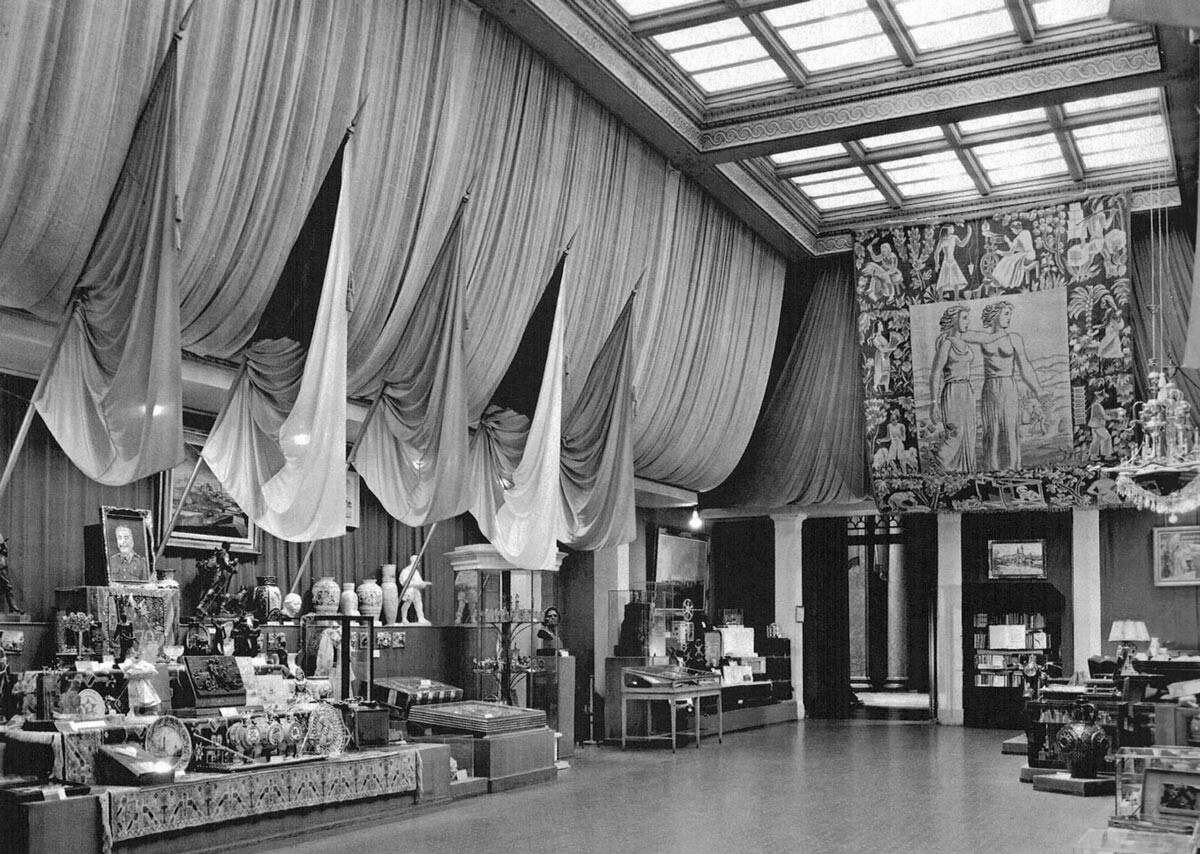 The museum building was under heavy security and the law-enforcement services even brought in guard dogs.

By the end, about 4 million people had visited the exhibition… But Stalin himself never showed up. The exhibition had no time limit, and even after the death of its main hero in March 1953, no one thought to pack it up (or didn't dare to)...

One summer day in 1953, however, when museum employees came to work in the morning, the huge Turkmen carpet with portraits of Politburo members (pictured below) was missing. In such a highly guarded building there couldn’t have been a theft or accidental loss. The problem was that the carpet depicted Stalin's closest comrade, the powerful interior minister Lavrenti Beria, who had been arrested. Soon, the exhibition was closed for good. 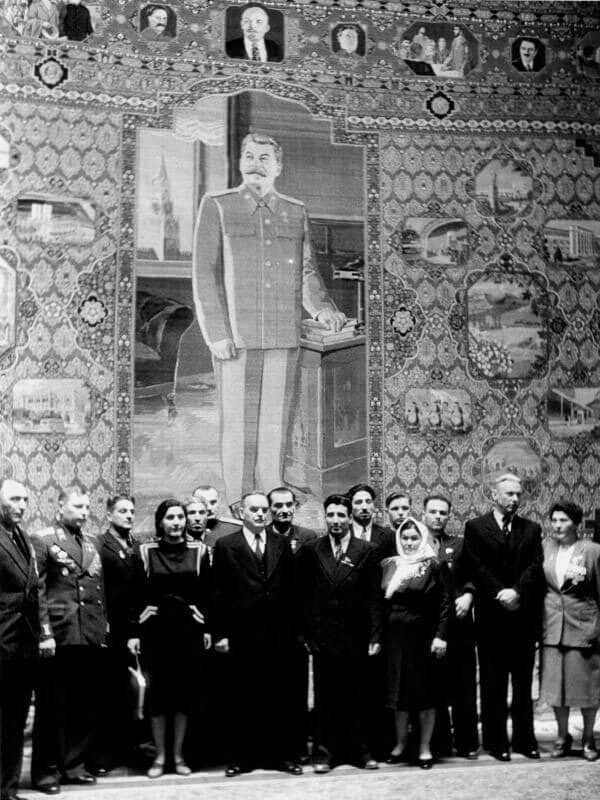 Turkmen carpet with portraits of Stalin and Politburo members

After the closure, the items that had at least some artistic or cultural value were distributed among other Moscow museums. Some remained in the Pushkin Museum; others went to the Museum of the Revolution, the Lenin Museum, and the Museum of Moscow. For example, a Yava motorcycle donated by the Czechs, rails, jackhammers, and other engineering objects were sent to the Polytechnical Museum since they were items that spoke about the history of technical progress.

On December 25, 1953, the Pushkin Museum revealed the halls of art and culture of the Ancient East, Antiquity, and Western Europe (from the 4th century BC to the 20th century). Even the works of the Impressionists finally saw the light of day. 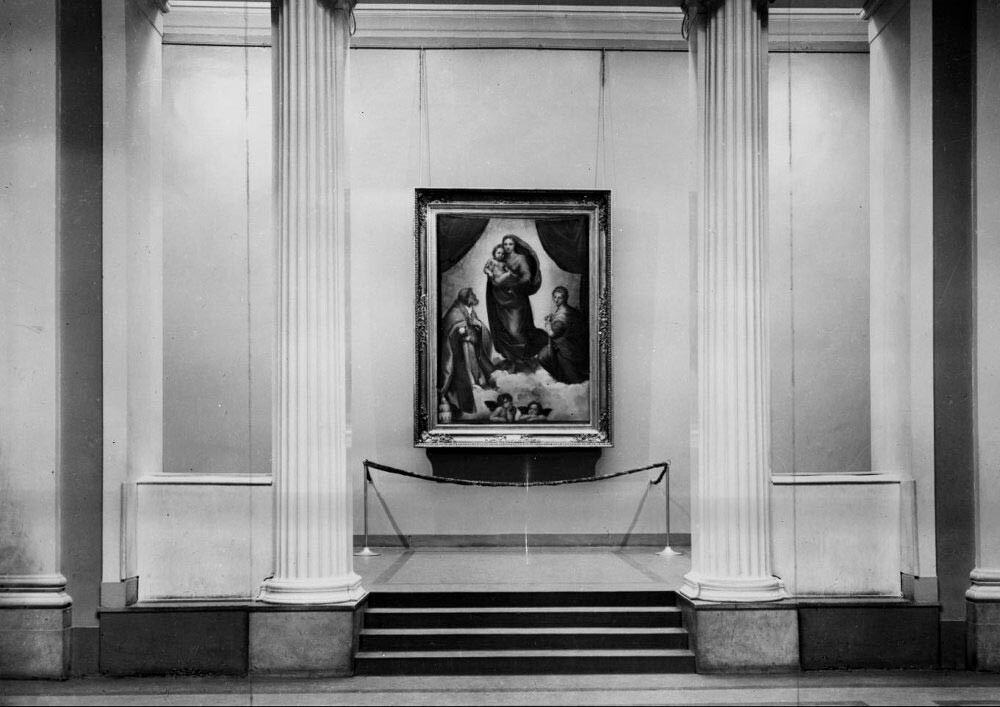 Raphael's Sistine Madonna at the exhibition in Pushkin Museum

Later, after the global restoration, the museum also made an exhibition of trophy art and masterpieces from the Dresden Art Museum. Raphael's masterpiece, "Sistine Madonna", was exhibited for the first and last time in Russia, before returning to its home in Germany.