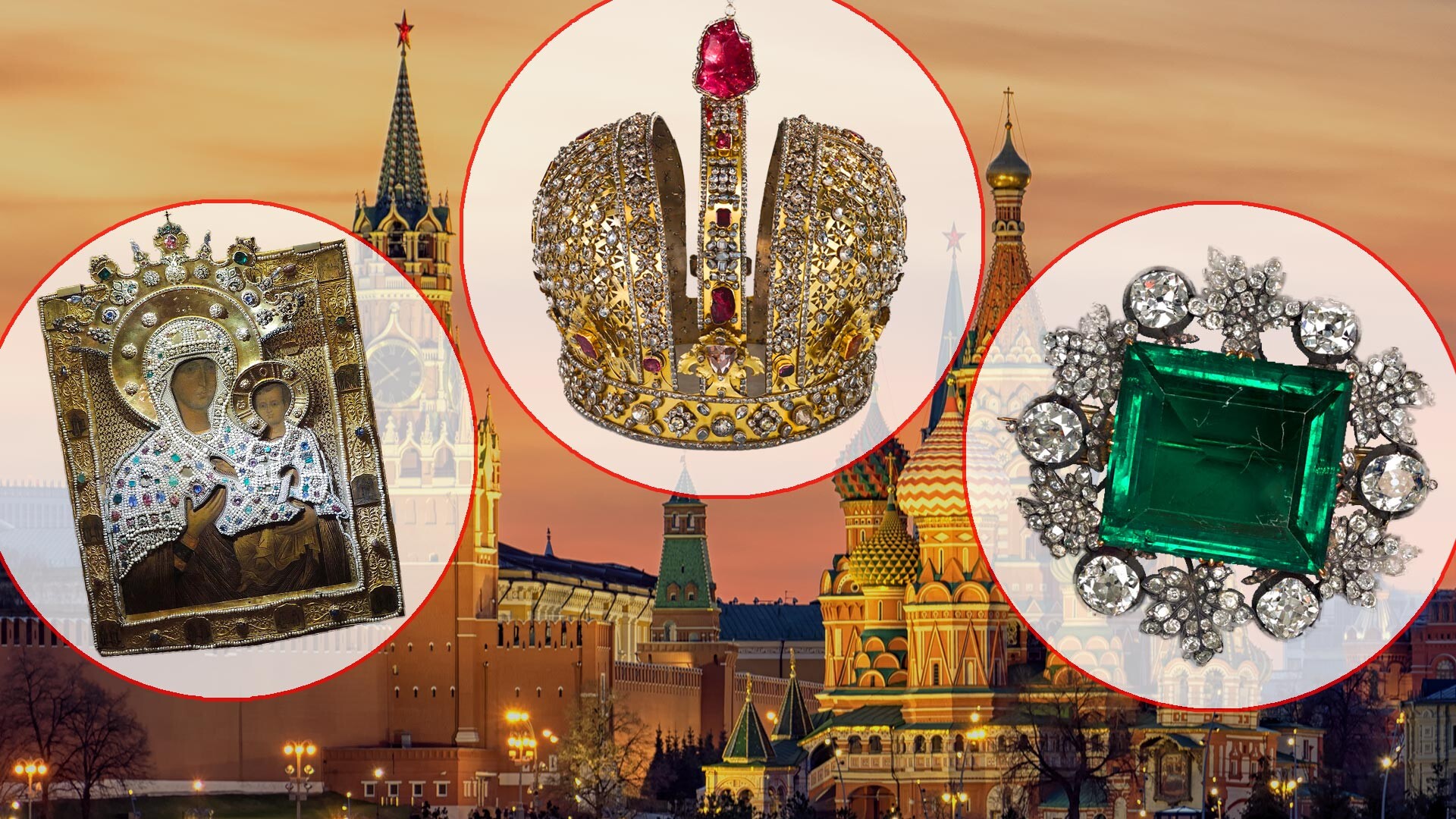 Having established Soviet power and finishing the Civil War, the Bolsheviks had to take care of the economy of the new country, which was gripped by hunger, poverty and devastation. In the second half of the 1920s, the large-scale “Stalin sales” of the Russian Empire’s art treasures to the West began. Tsarist crowns, diamonds, Faberge eggs, icons and paintings by Old Masters and Impressionists from Russian museums, including the Hermitage, were sold literally wholesale to millionaires in the United States and Europe. 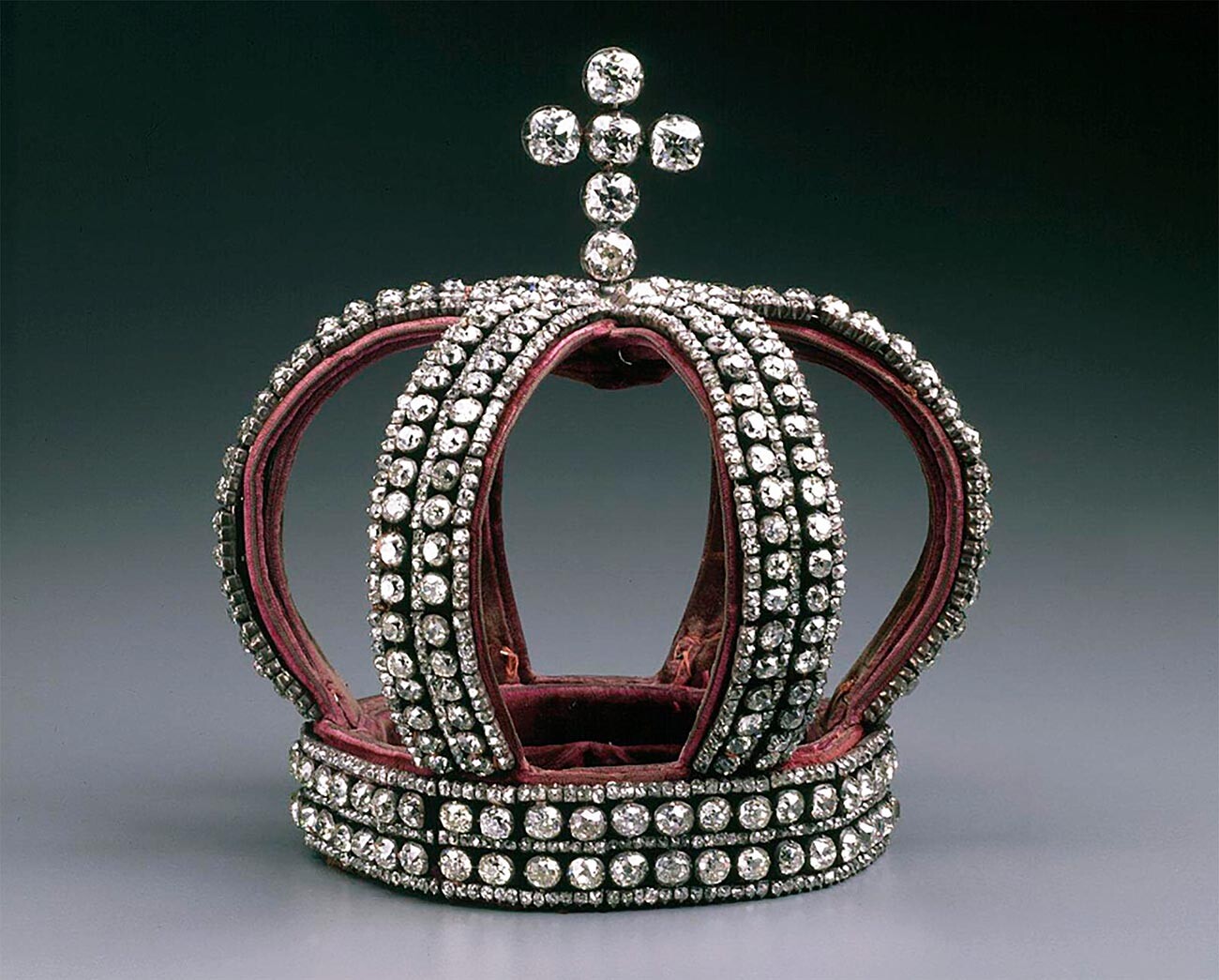 However, museum workers bravely fought and managed to save and preserve many important items. One of those museum “defenders” was Dmitry Ivanov, director of the Armory Chamber, one of the museums of the Moscow Kremlin. 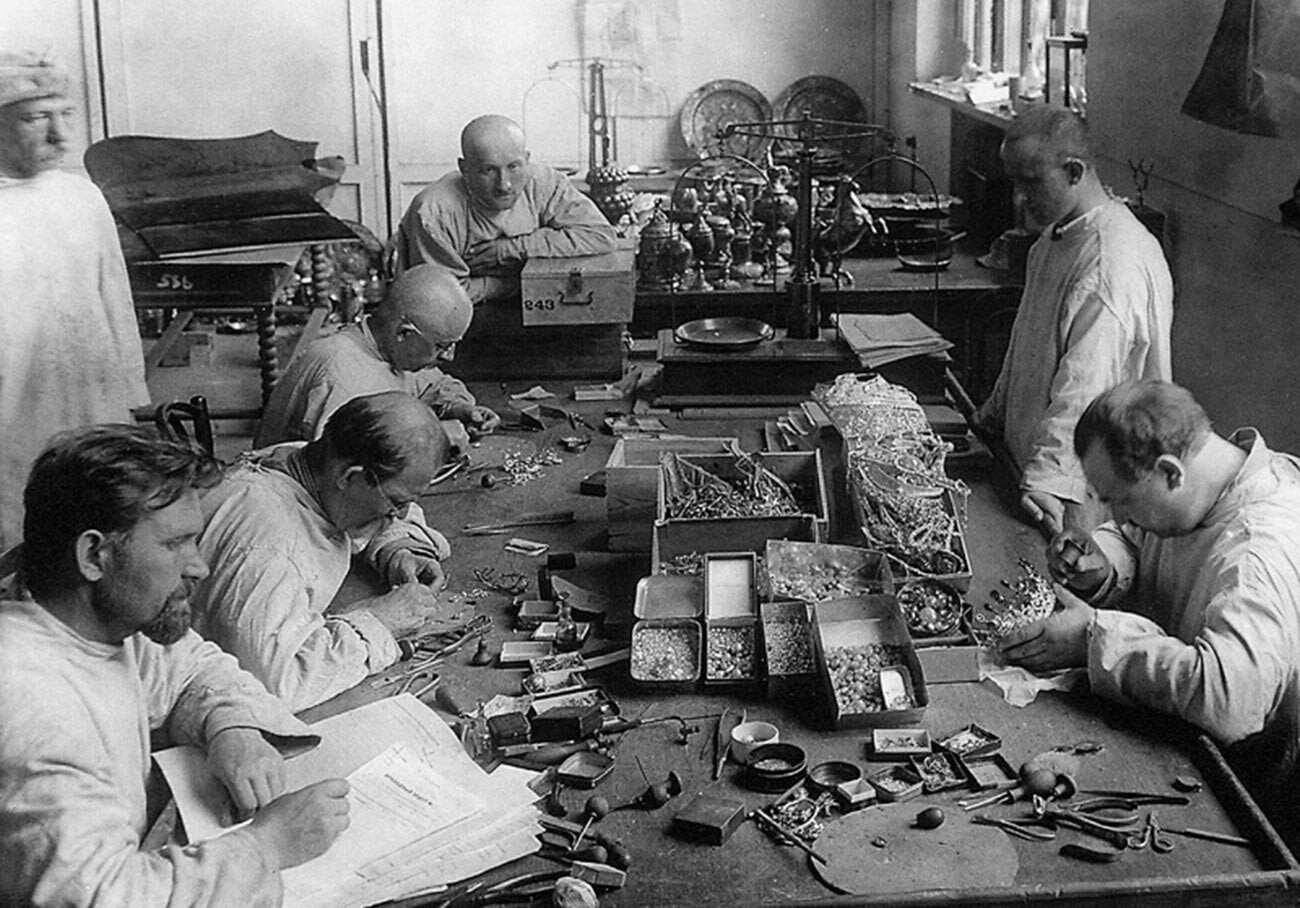 The imperial regalia, jewels and precious items of the Romanov family were evacuated from St. Petersburg to the Moscow Kremlin at the beginning of World War I, because of the danger of a German attack on the then capital of the Empire.

After the 1917 Revolution, a museum department was formed in the People’s Commissariat of Education, with a sub-department for the protection of art and antiquities. Dmitry Ivanov, an employee of the department, was sent to the Kremlin to protect the former tsarist property from spontaneous use.

He was born into a noble family and was surrounded by objects of art and antiquities since childhood. Back in Tsarist Russia, he got a classical education, graduated from Moscow University, became a lawyer and worked at the Ministry of Justice. He was always interested in the preservation of cultural treasures, though. Forty years before UNESCO was founded, Ivanov called on the world community to introduce an international law for the protection of artworks. Ivanov considered the irrecoverable loss of cultural treasures that were lost by different countries during wars and revolutions. 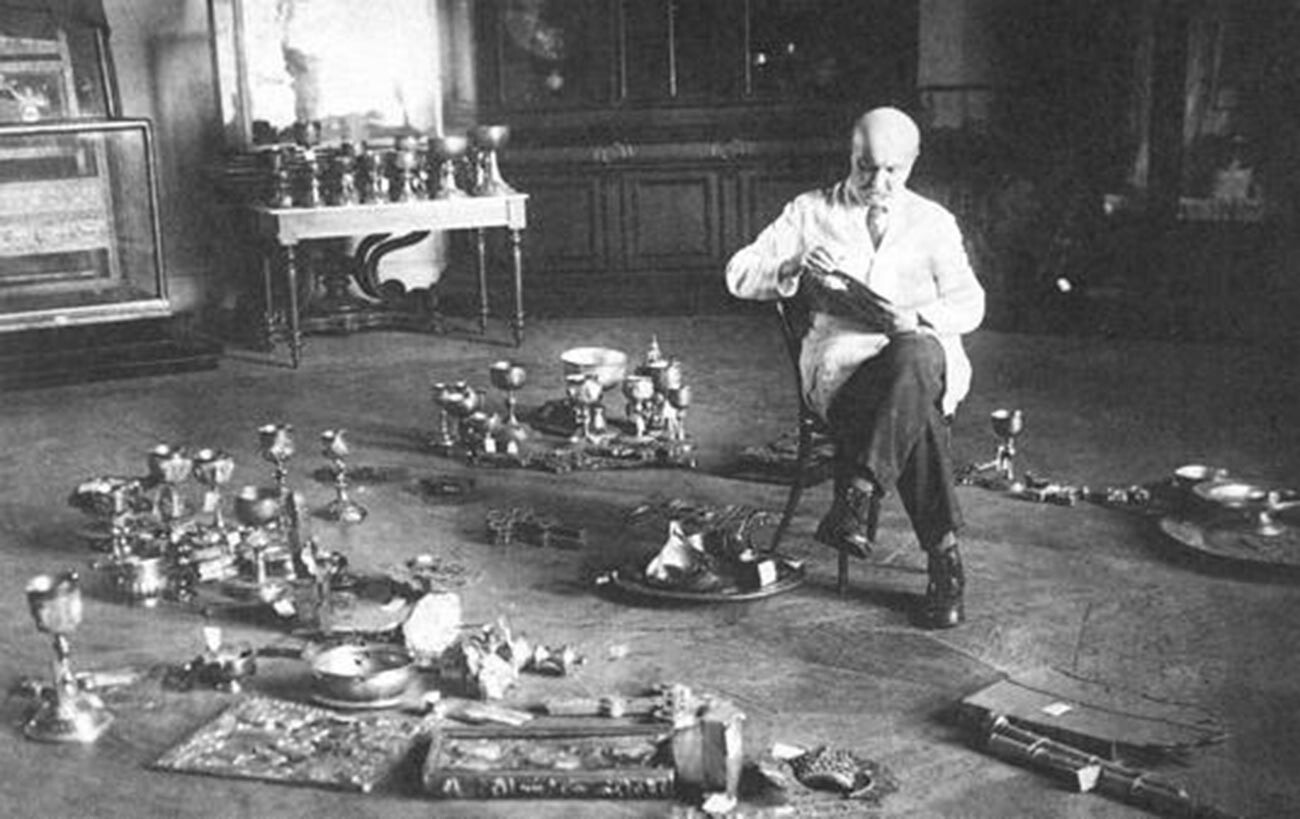 Dmitry Ivanov made an inventory of church items

After the Revolution, Ivanov decided to stay in Russia and volunteered to work in the People’s Commissariat of Education, to stand up for the protection of historical and artistic sites.

Preserving treasures from the state storage

The Bolsheviks forbade people who fled the country to take treasures out with them - and nationalized them instead. They also collected loads of art and church treasures, as well as precious metals and stones from all over the country. In 1920, the Bolsheviks established the State Fund of Precious Metals and Precious Stones (Gokhran), which was to centralize all the nationalized treasures. One of the main goals was to prepare them for selling abroad, in order to bolster the country’s economy. 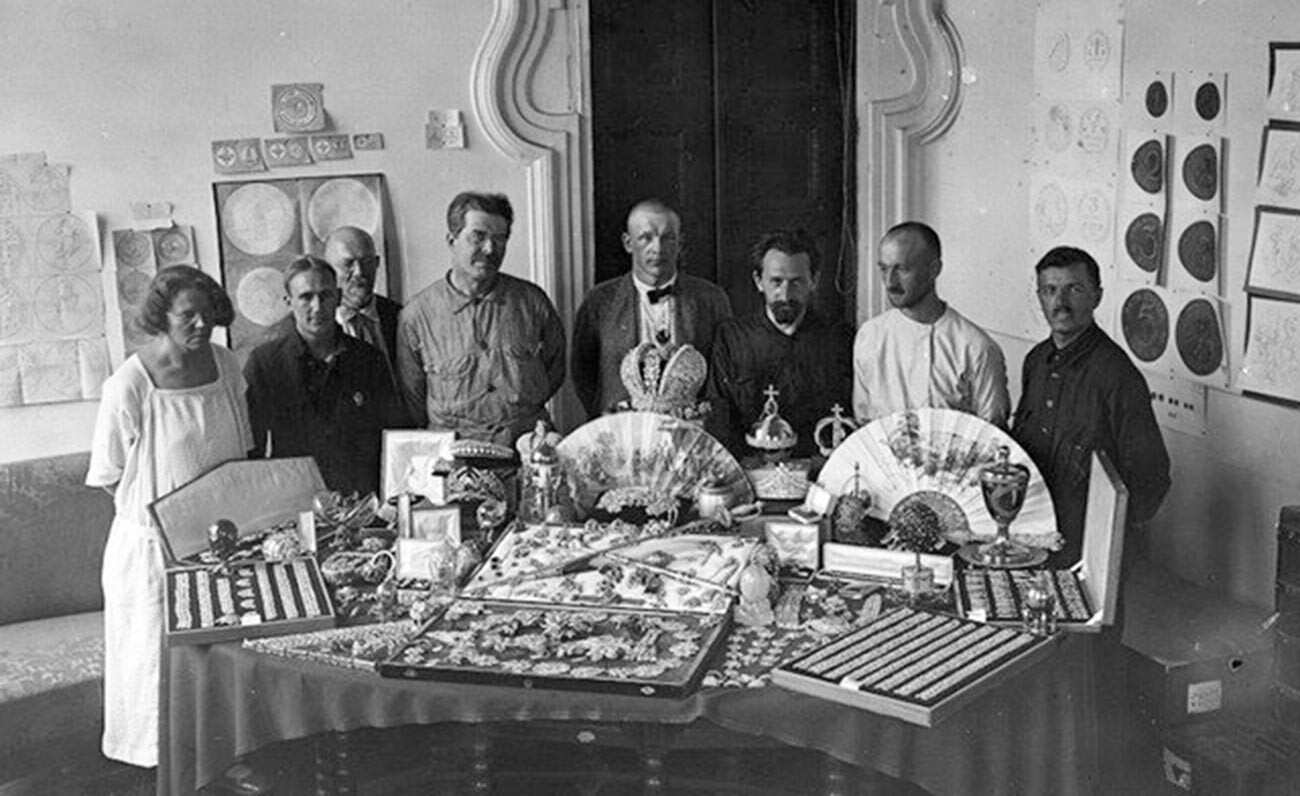 In 1922, Dmitry Ivanov became head of the Armory Chamber, the Moscow Kremlin’s special museum-treasury. He managed to get permission for the Chamber’s workers to review the multiple items of the Gokhran. 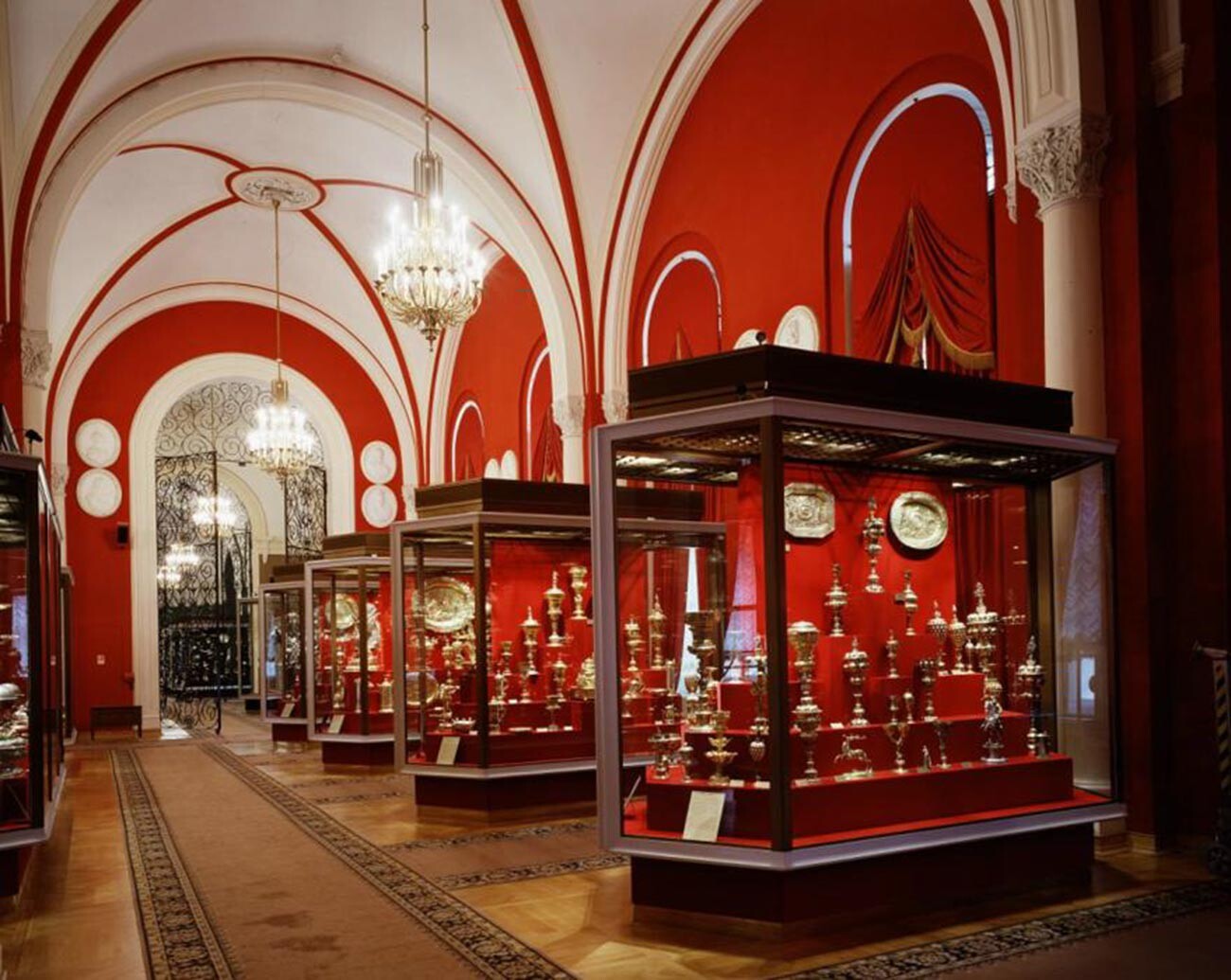 The Armory Chamber of the Moscow Kremlin

“From morning till evening, at an unusually rapid pace, [we were] sorting out a few hundred items just in a day: all of them were of the most diverse quality, from the finest in the world to the most paltry ones. We had only a few moments to define their fate and importance…” he wrote in a report. 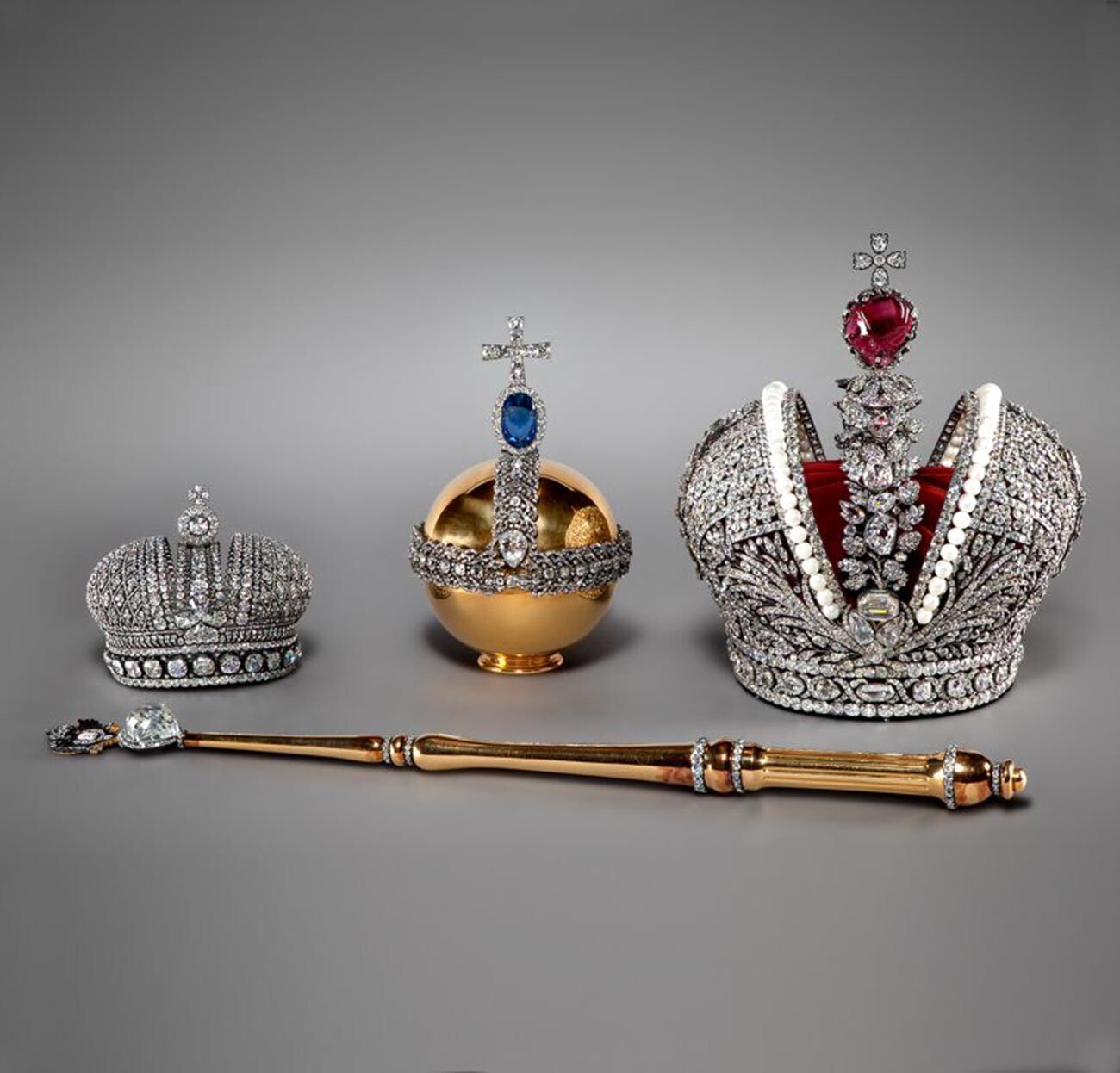 Out of the 80 thousand of Gokhran’s items, Ivanov and his team had to select the most important treasures and - most importantly - convince Bolsheviks that they should remain in the country and be displayed for public, as it was done with the royal regalia in France and England, for example. 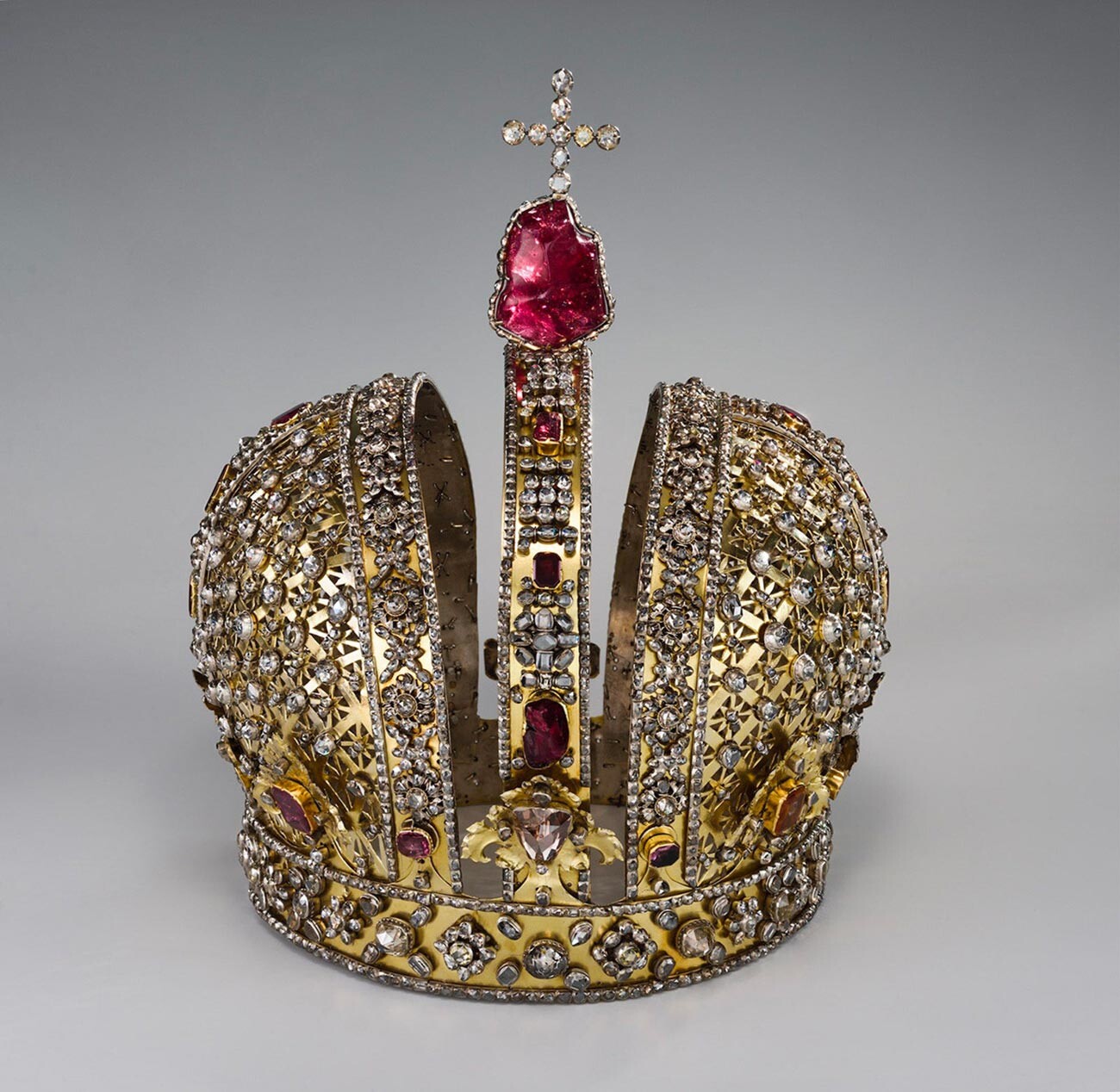 Thanks to Ivanov, many treasures of the Russian Empire remained in the country, some of them were displayed in the Armory Chamber and others later formed a special department of the museum - the Diamond Fund. He also managed to preserve thousands of church relics and to create a new permanent exhibition of them in the Armory Chamber. Ivanov kept on looking for various artifacts - in antique stores and sometimes even saved objects from melt shops. 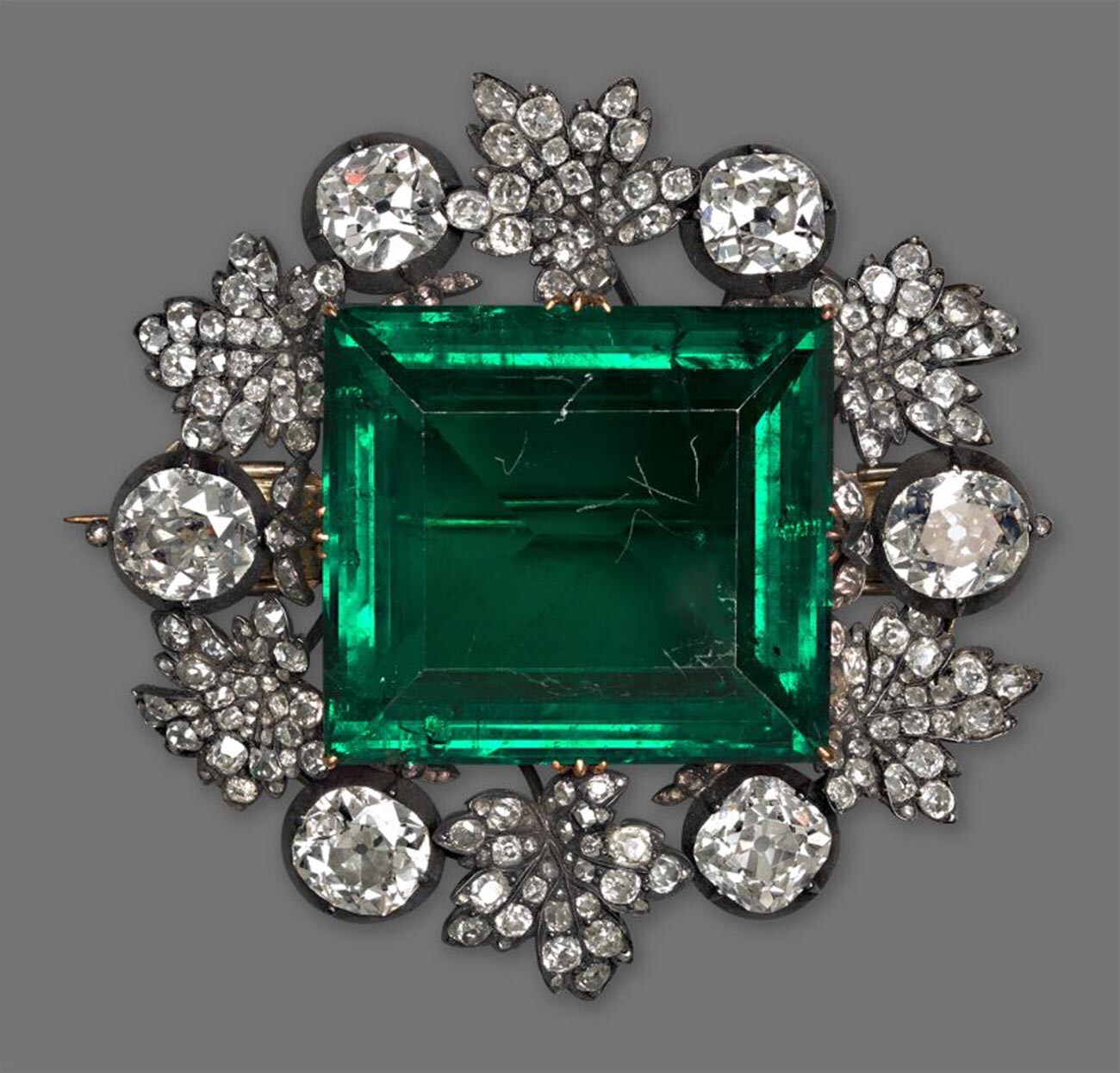 In 1924, Ivanov was arrested on trumped-up charges by some museum counterrevolutionaries. However, his release was arranged by Natalia Sedova, head of the museum department of the People’s Commissariat of Education and wife of the all-powerful Leon Trotsky. Soon after, Trotsky and his wife were forced to flee the country. 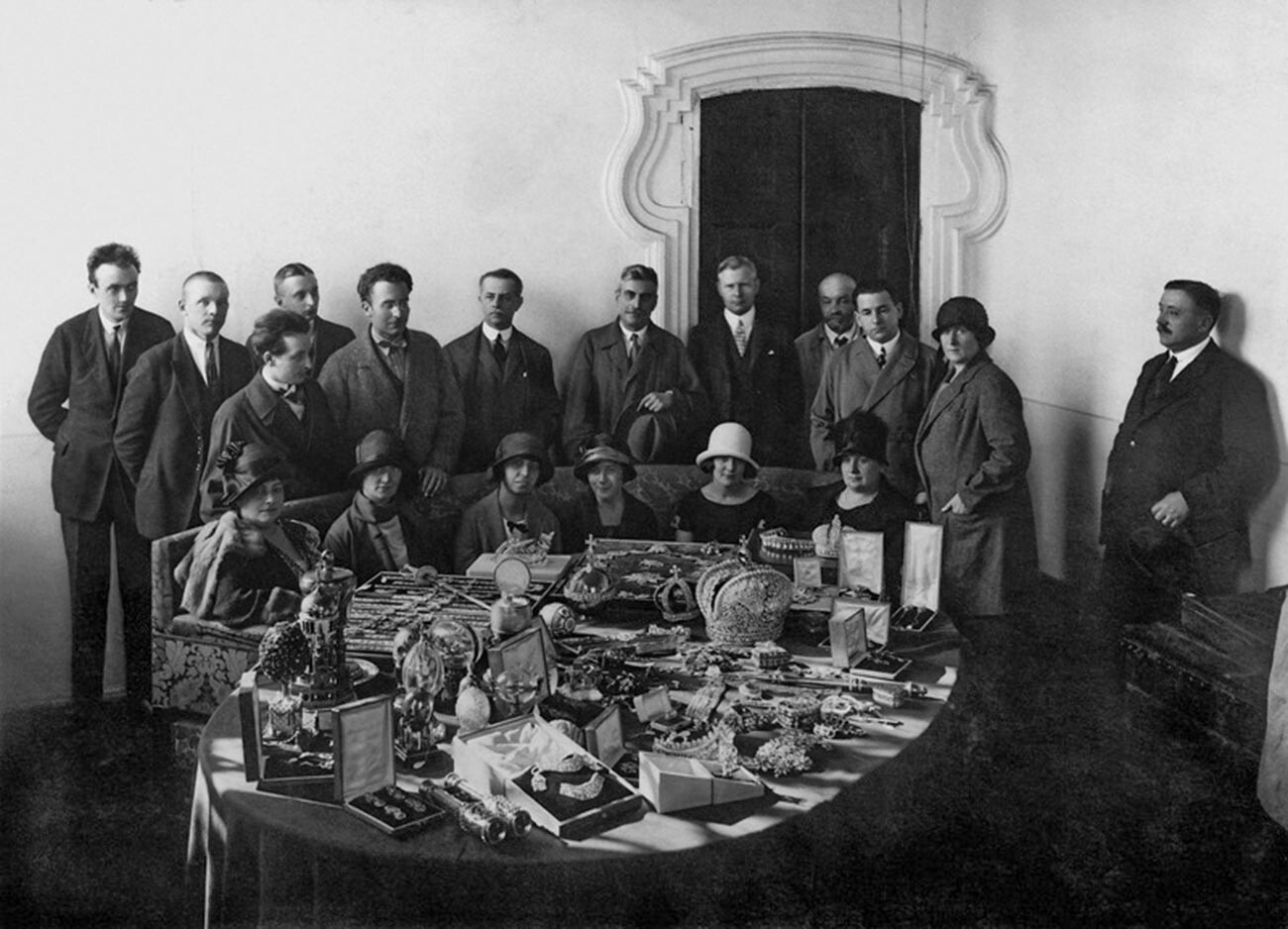 The state art policy was accompanied by the savage demolition of Kremlin monuments and churches - the shock of this caused Ivanov to have a stroke. He left his position as director of the Armory Chamber, but remained working there and kept doing his best to save the treasures from the sale.

However, having completed purges of “counterrevolutionary elements” in cultural institutions, the Bolsheviks resumed their plan to maintain the economy selling the tsarist treasures. Gokhran had to revise the Armory Chamber’s collection and find “non-museum” items that would cost 30 million rubles altogether - to sell abroad. 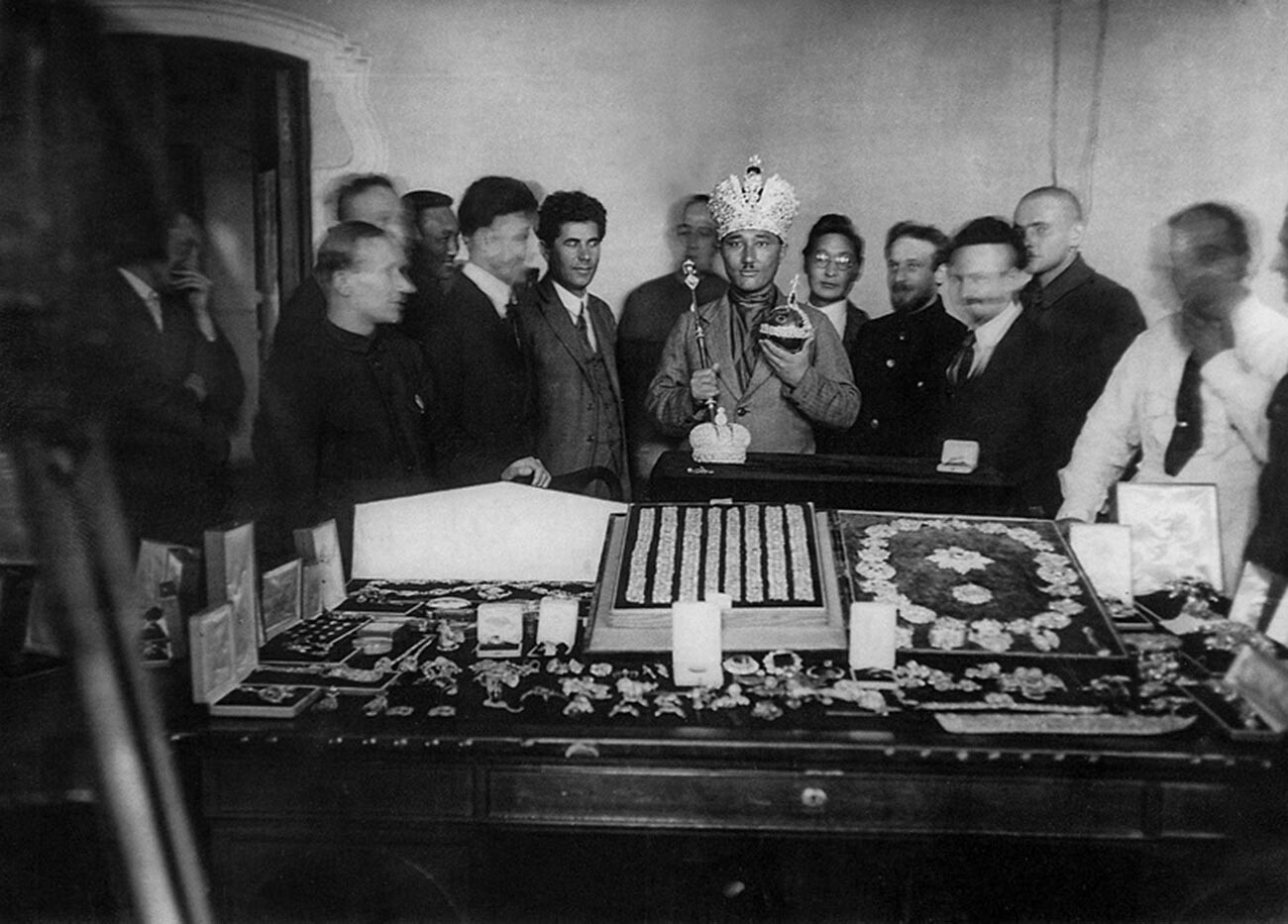 “I didn’t steal, didn’t sell, didn’t trade, didn’t hide the Chamber’s treasures, but there was chaos in the paperwork, many blunders and mistakes,” said the note that was found on Dmitry Ivanov’s table after his mysterious death in 1930. By the desperate tone, many thought that he had committed suicide, because of the barbaric actions of the authorities. 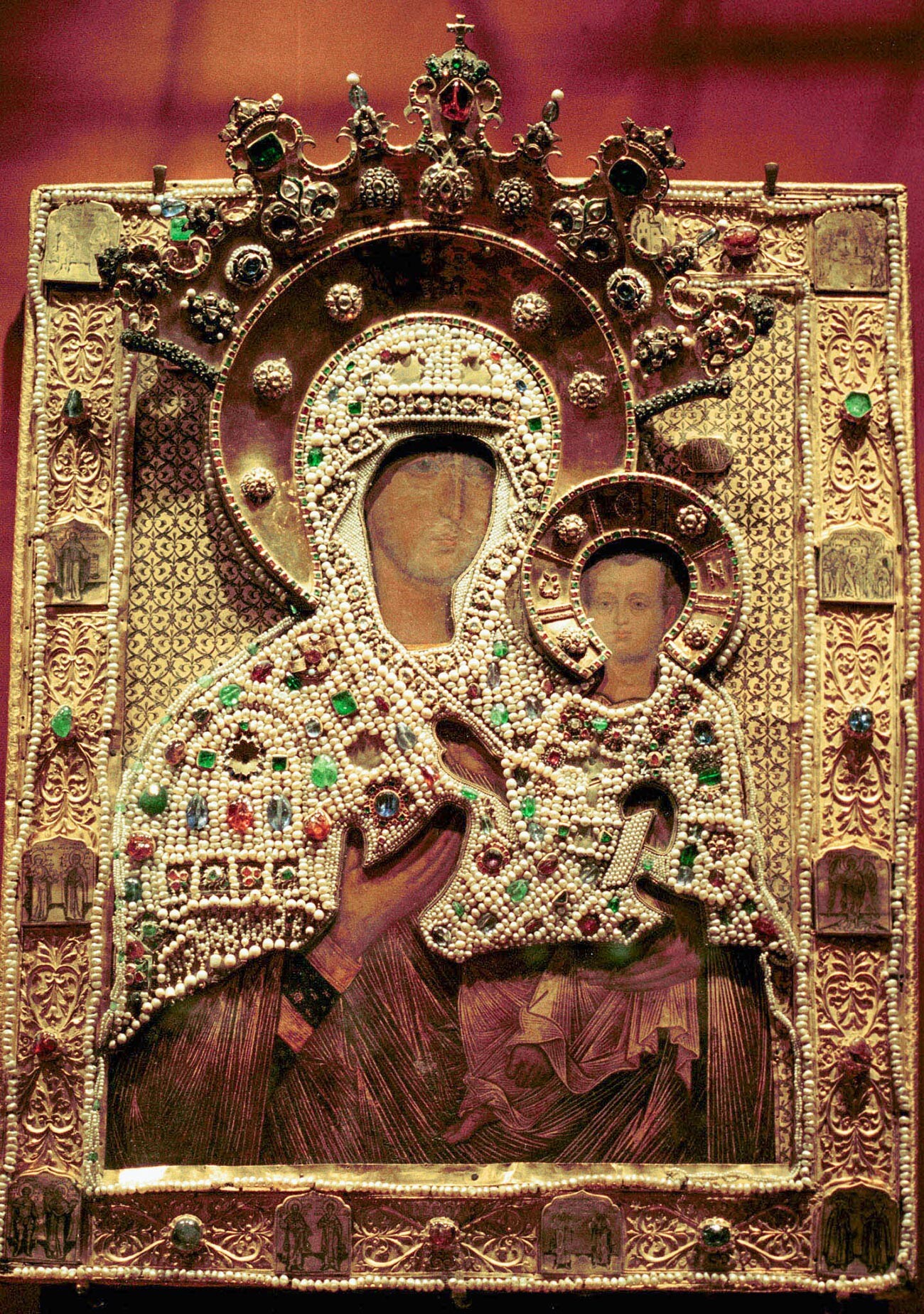 Our Lady of Vladimir icon, the 18th century, from the collection of Moscow Kremlin Museums

The very next day after Ivanov’s death, 100 objects of French silver were withdrawn by Gokhran, including those that he had once managed to save. In June 1930, they seized more than 300 pieces of antiques and 11 Fabergé Easter Eggs... 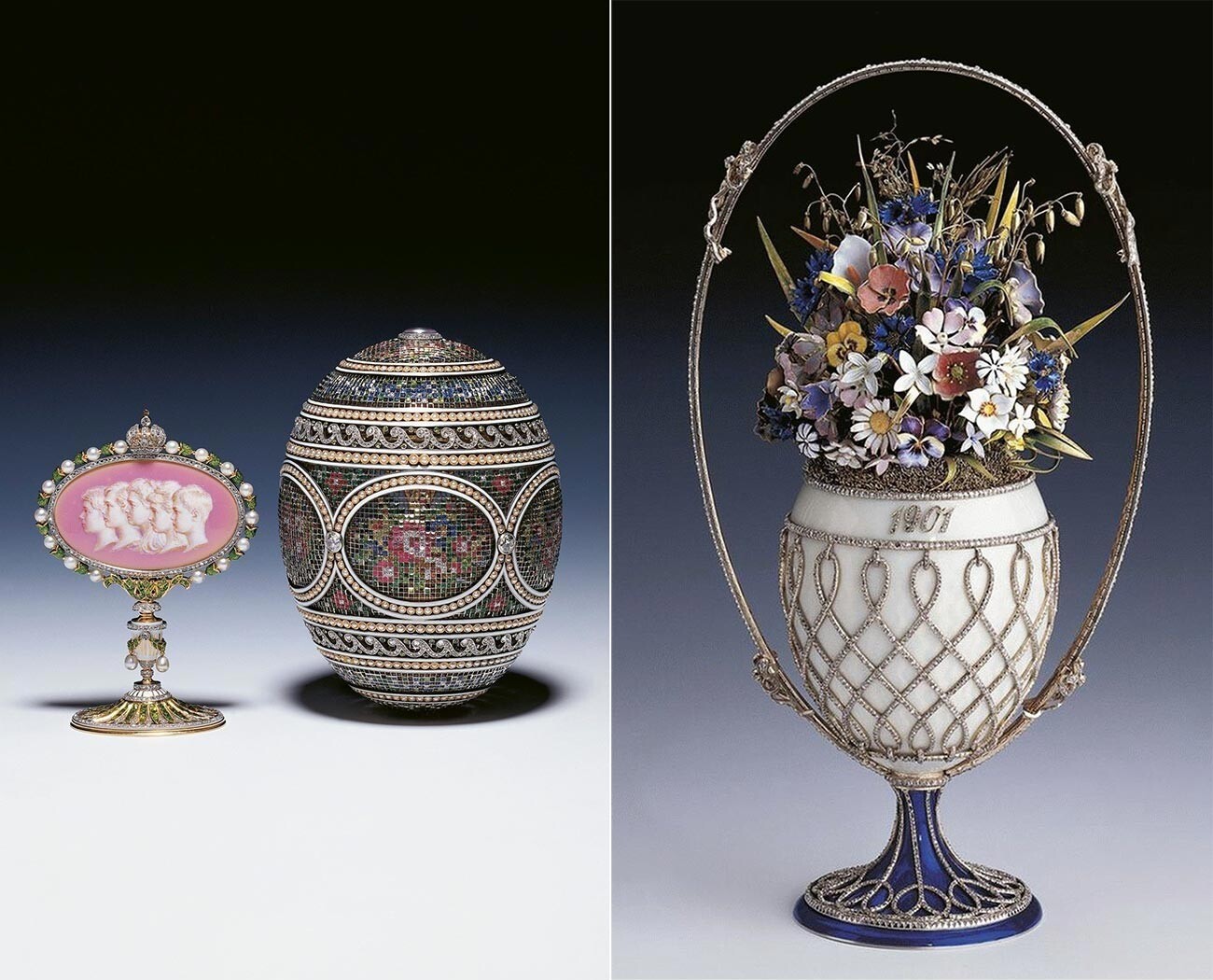 ‘Mosaic’ and ‘Basket of wildflowers’ Faberge eggs, sold in the 1930s to the British royal family

During the next five years, the Bolsheviks kept seizing and selling off precious items from the Armory Chamber. And yet, most of the tsarist treasures saved by Ivanov remained in Russia and later formed the collection of the Kremlin’s Diamond Fund.

READ MORE about the Romanovs jewels in the Diamond Fund here.