Nicholas II through the eyes of Russian and foreign artists (PICS) 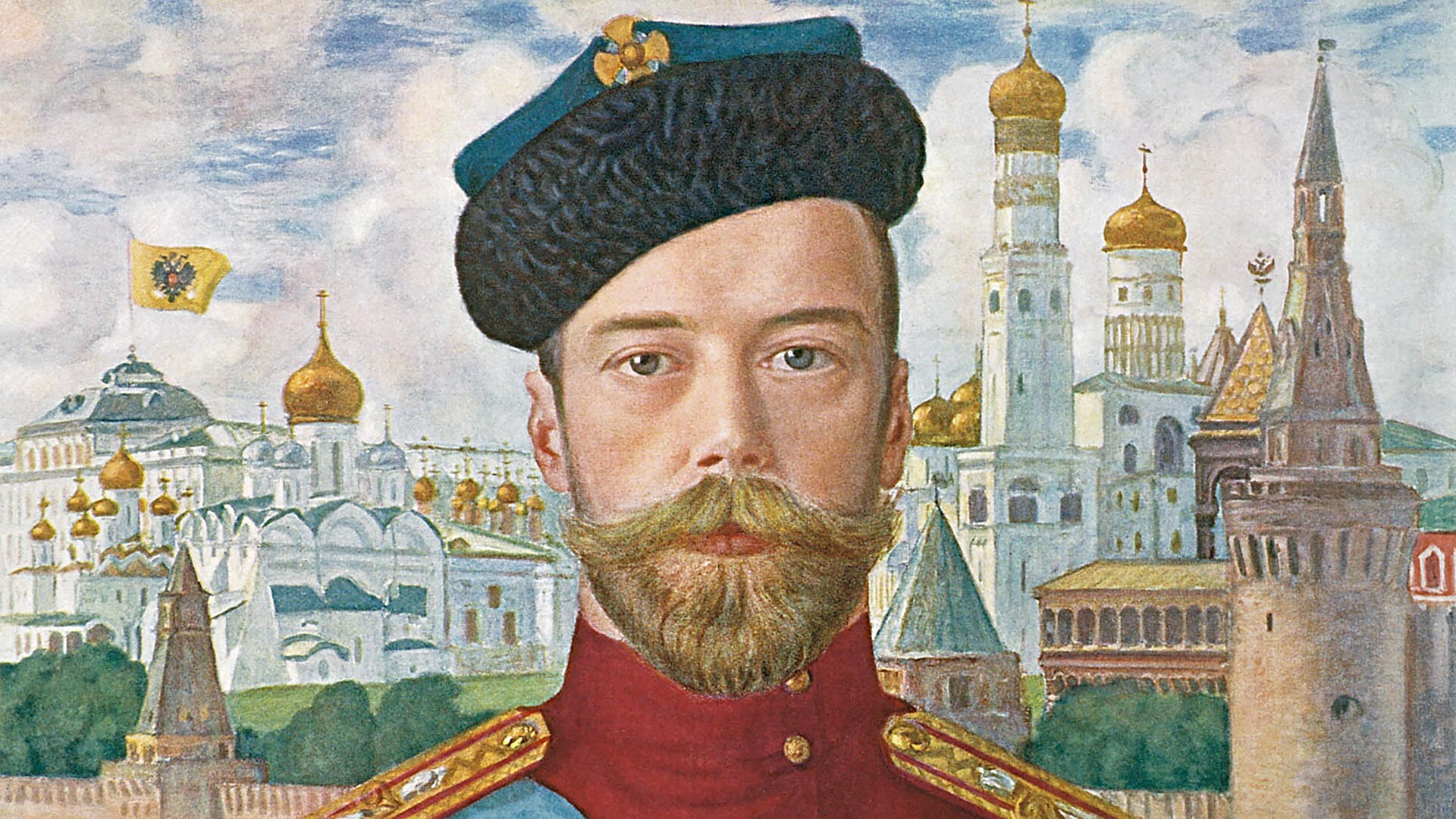 Tretyakov Gallery
Russia’s last tsar was keen on photography and we have lots of pictures taken of him and by him. But what about his image in fine art heritage? 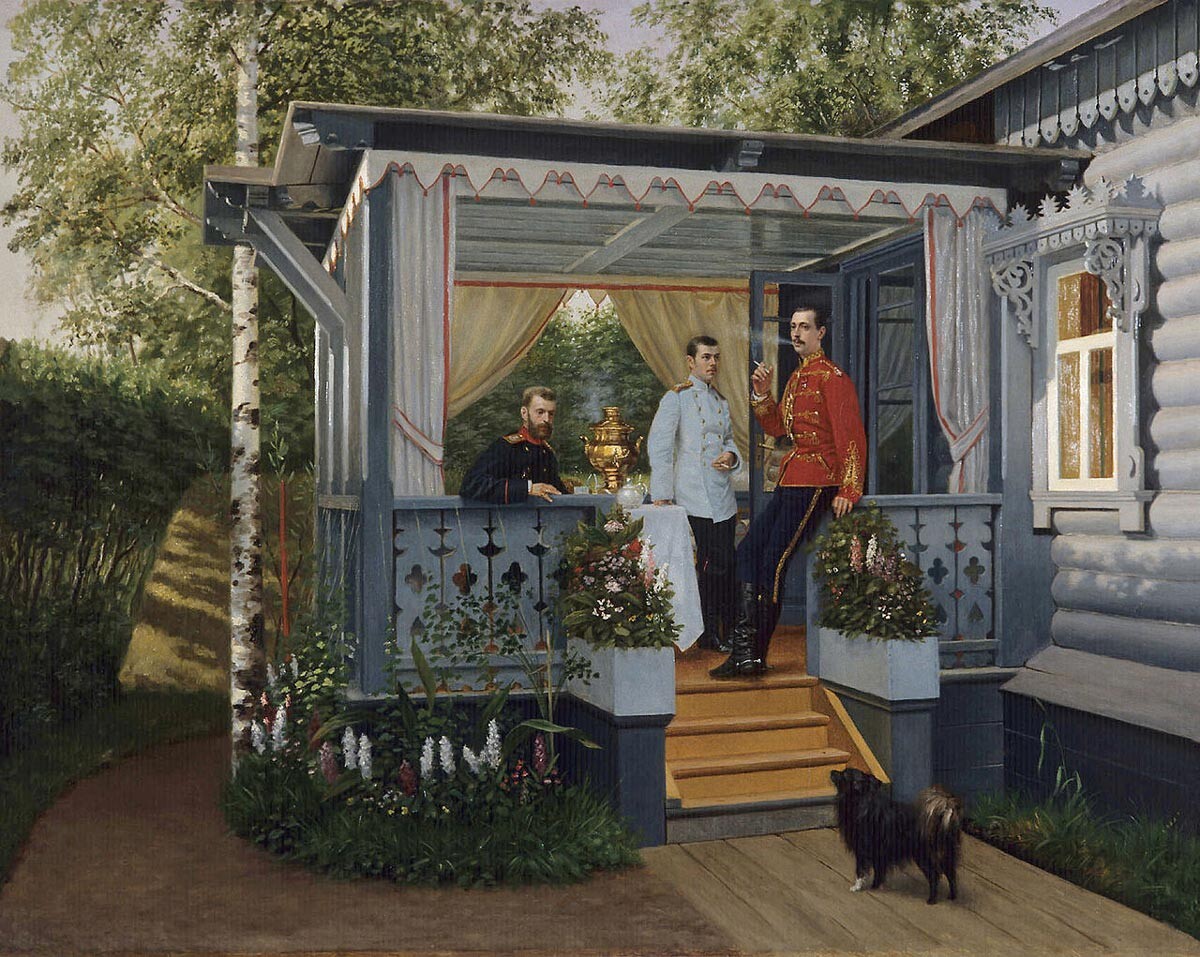 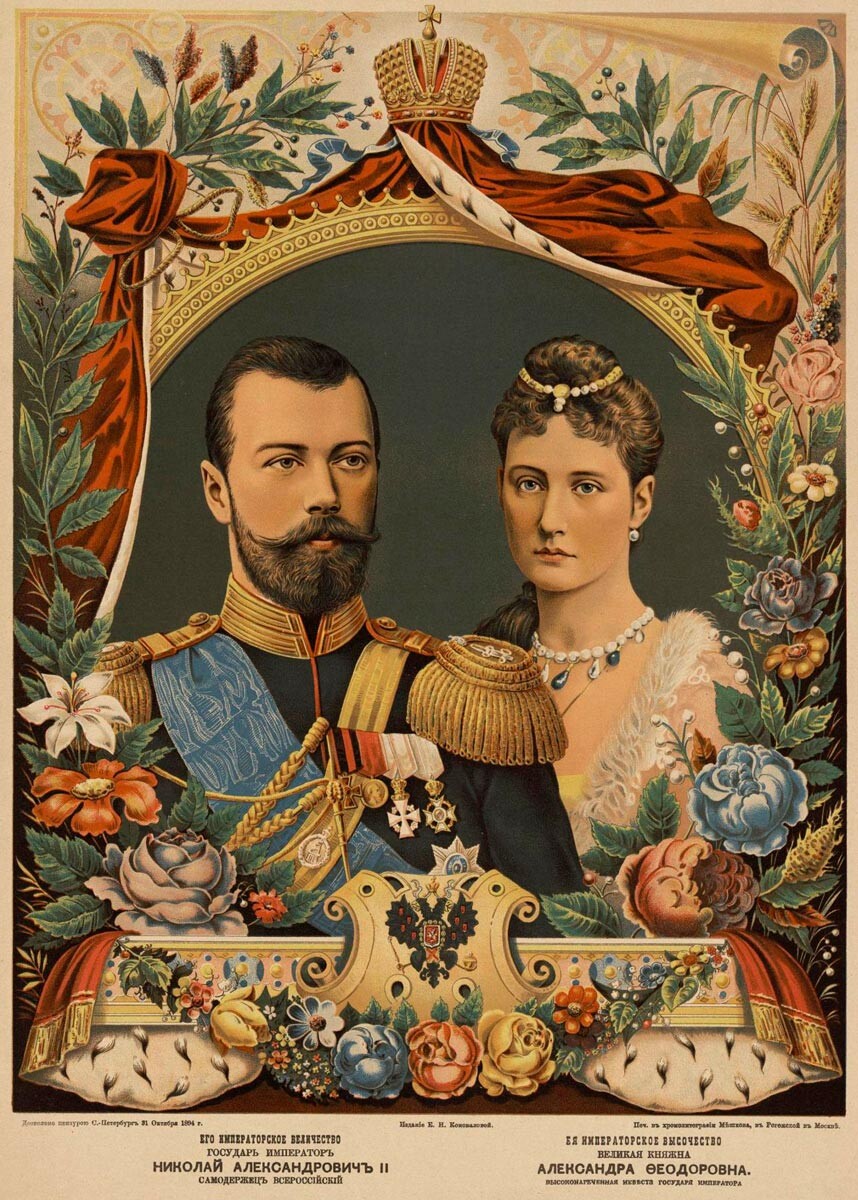 This colorful lithograph was printed in Moscow as part of a wedding celebration campaign by someone named Meshkov. 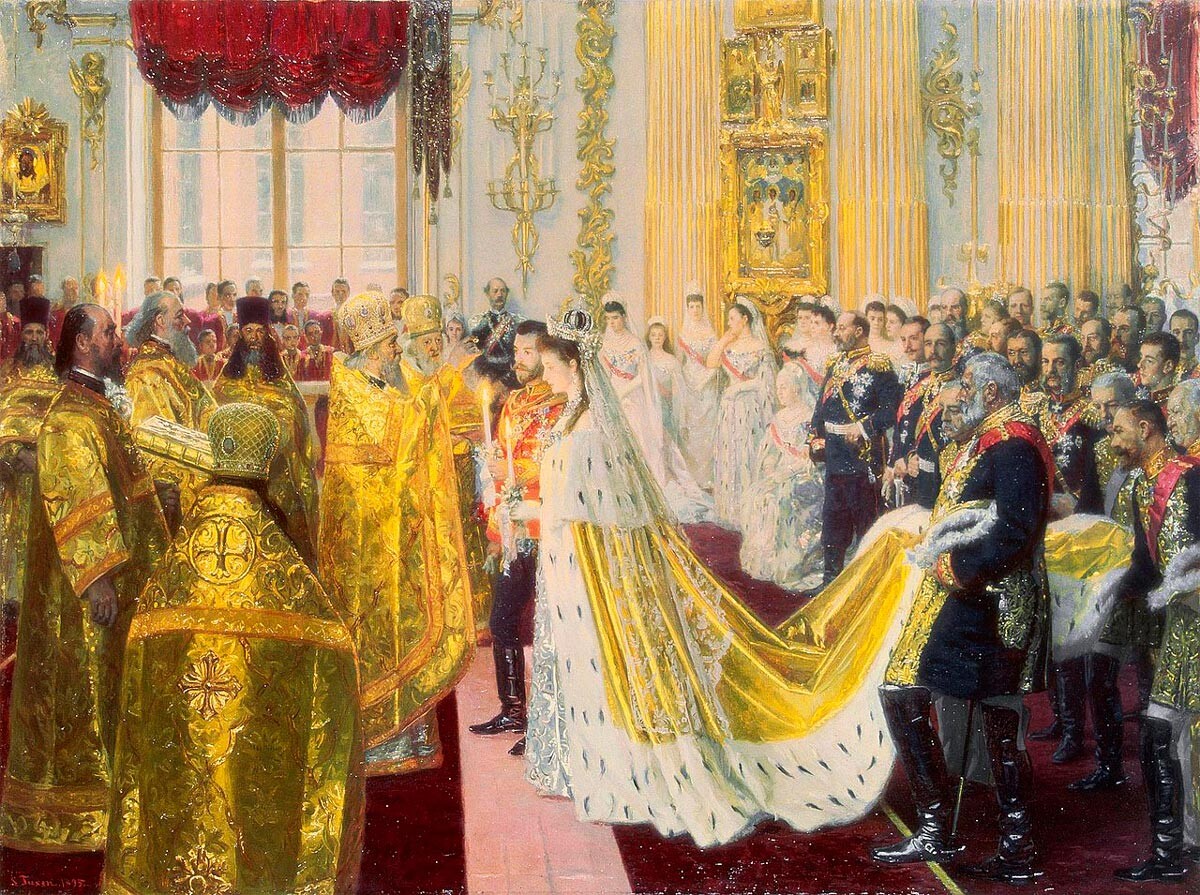 This Danish artist painted several European monarchs, including Christian IX of Denmark, Queen Victoria, George I of Greece and the Romanov family. 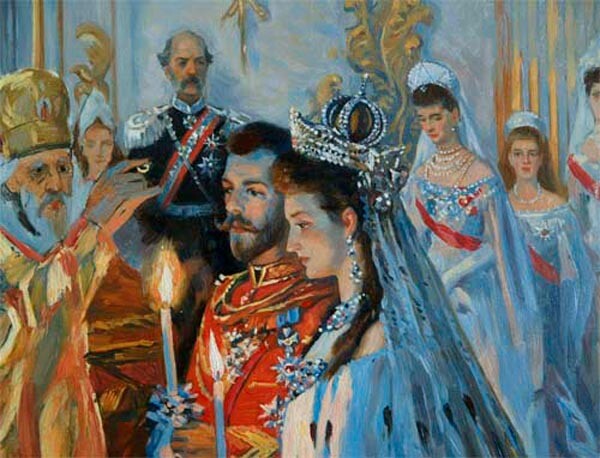 He also made a “zoomed” version, showing the couple’s faces closer. 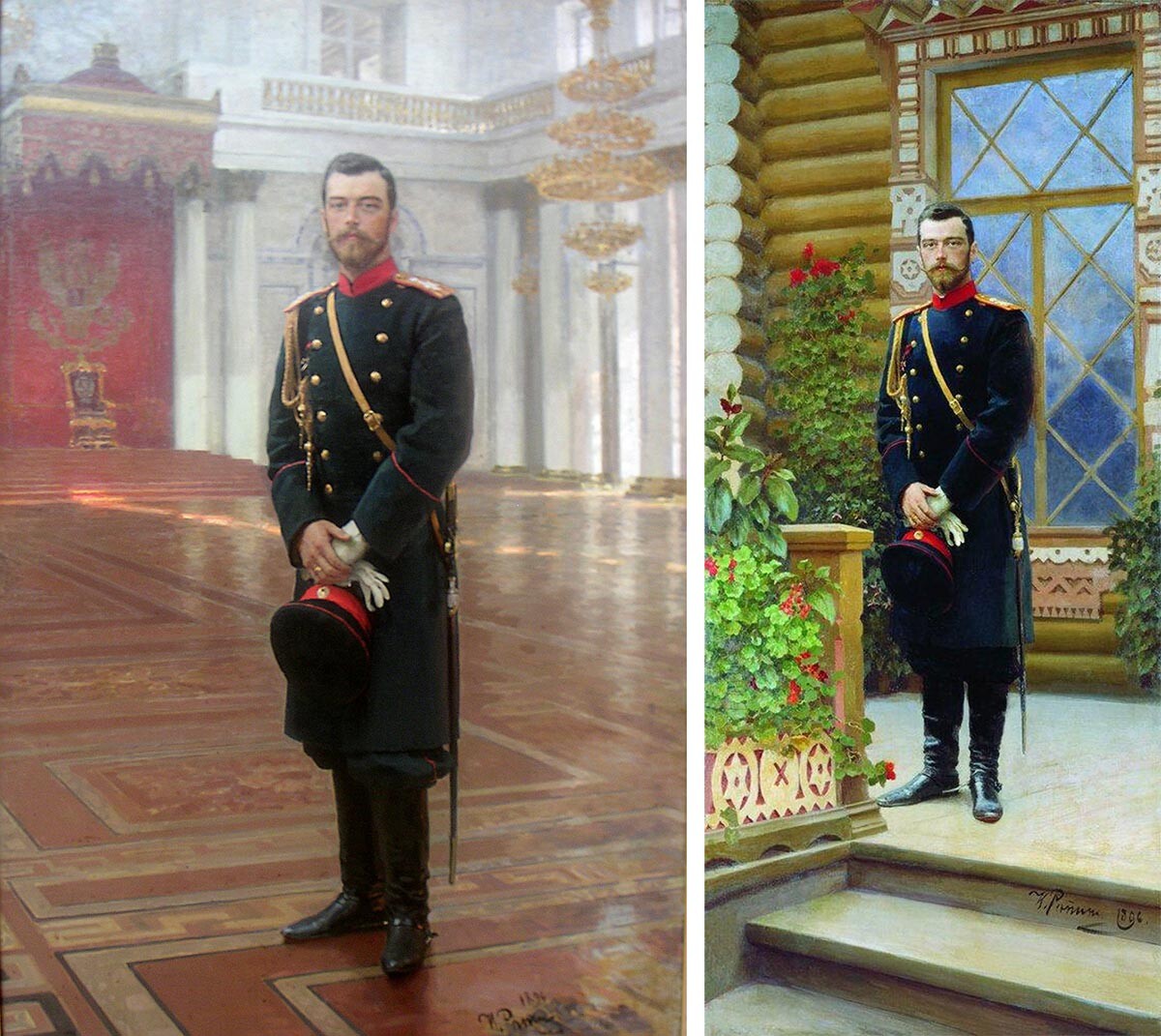 Repin was incredibly famous, not only for Barge Haulers on the Volga and other historical paintings, but also as a portraitist. Faces on his paintings look incredibly alive. After the coronation, Repin was ordered to paint several of the new emperor’s portraits. The most ceremonial one was created in the interiors of the Great Throne Room of the Winter Palace. Another one repeats the uniform and even the pose, but looks more casual. 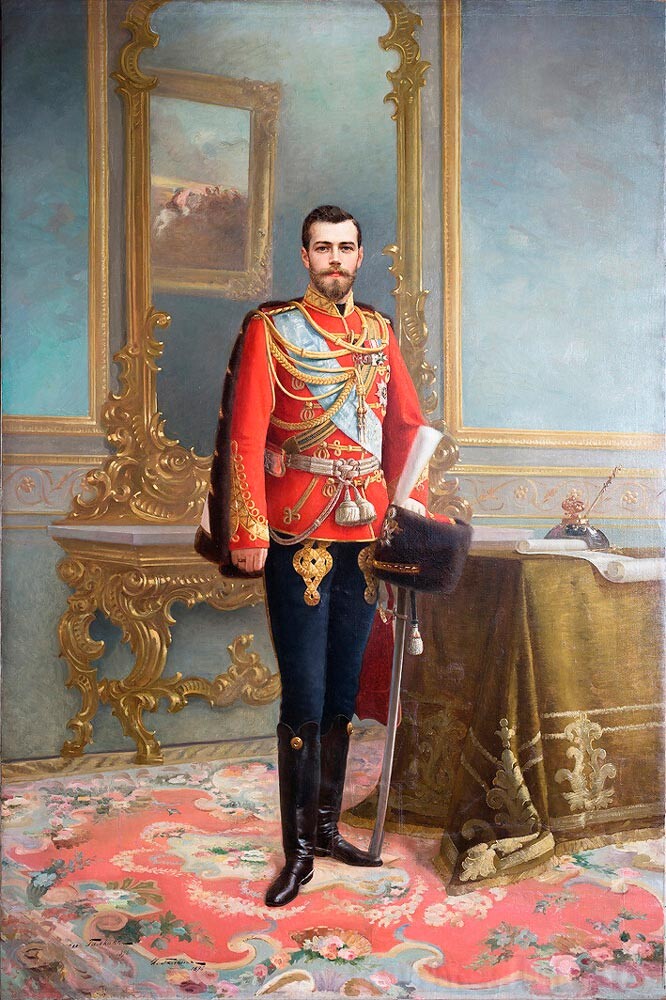 Most interesting fact about this portrait is that it was hidden for 90 years beneath the portrait of the 1917 October Revolution leader, Vladimir Lenin. The image of Nicholas on this “double” portrait was discovered during its restoration in 2016. You can check out photos unveiling the discovery here. 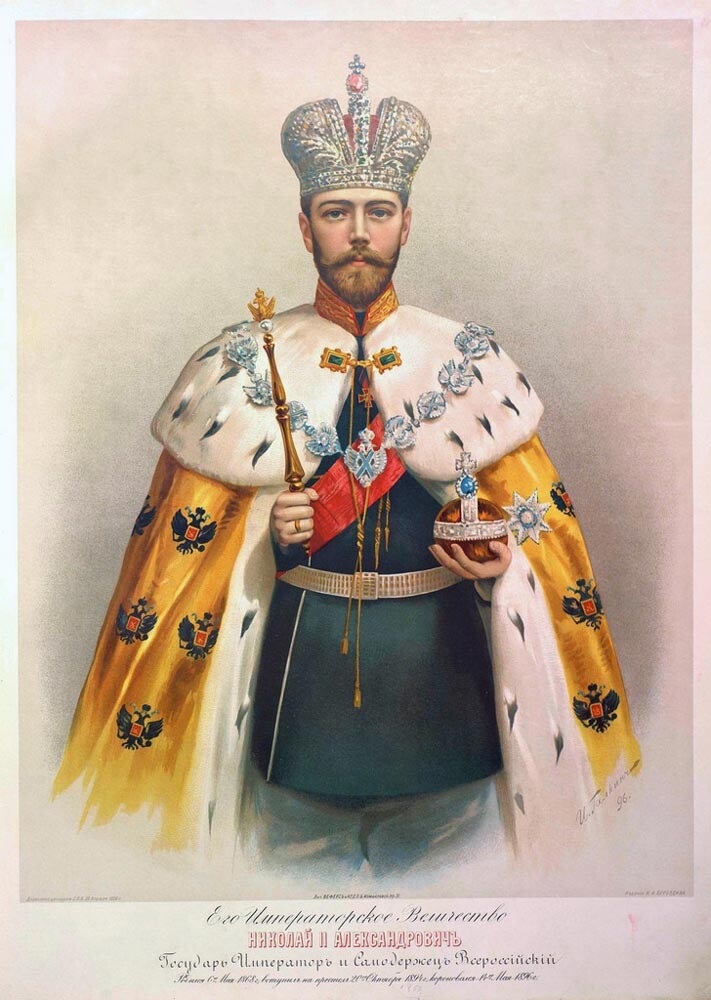 This portrait of Nicholas II was featured in the illustrated album called ‘The Russian Reigning House of Romanov’, printed in 1896 by some I.V. Tsvetkov publications. 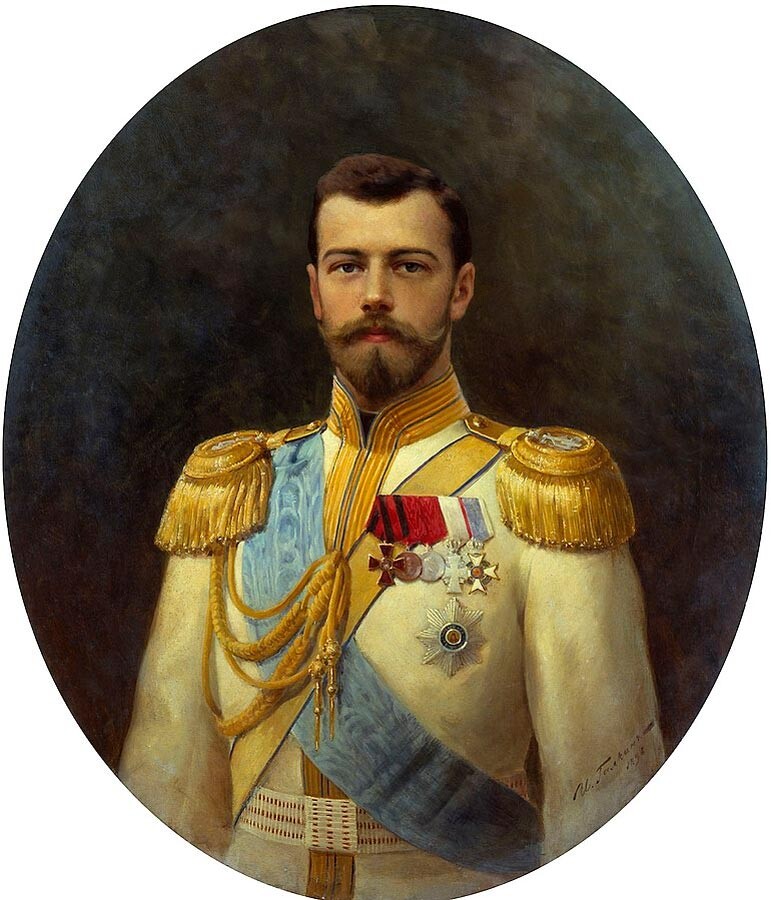 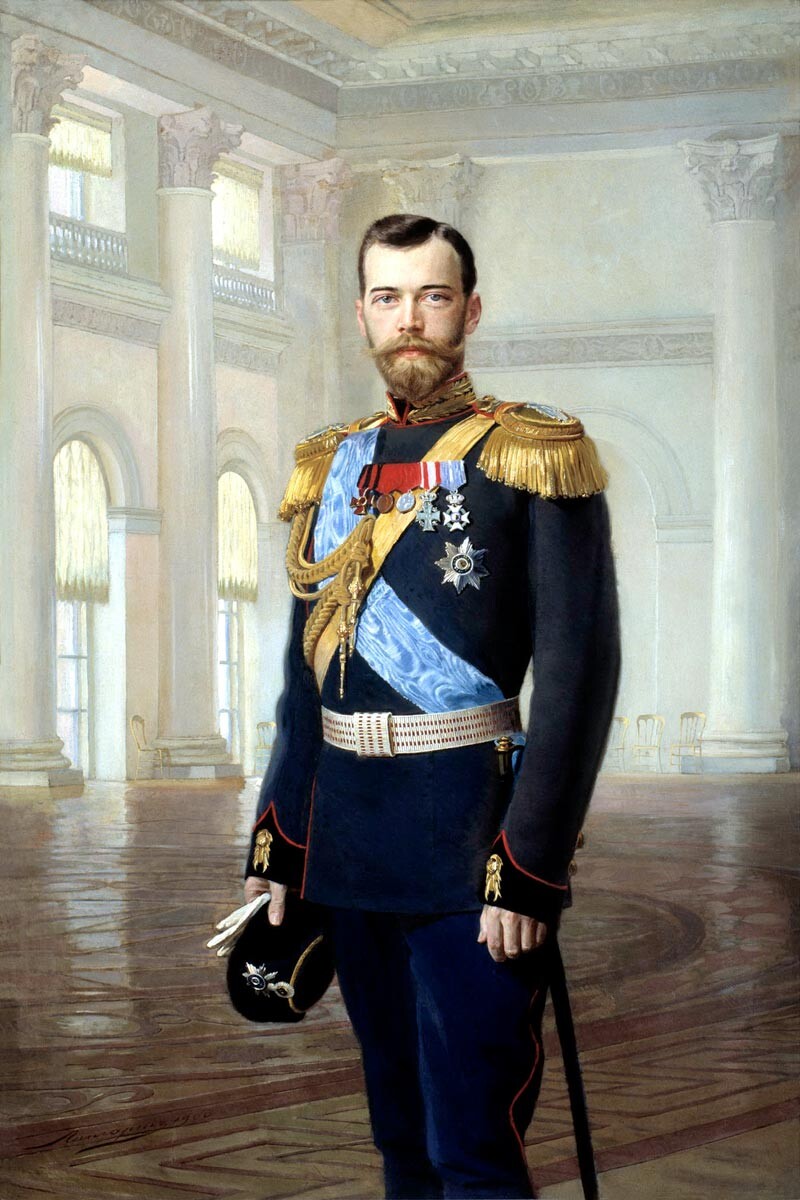 This portrait shows the tsar in one of the Moscow Kremlin halls. 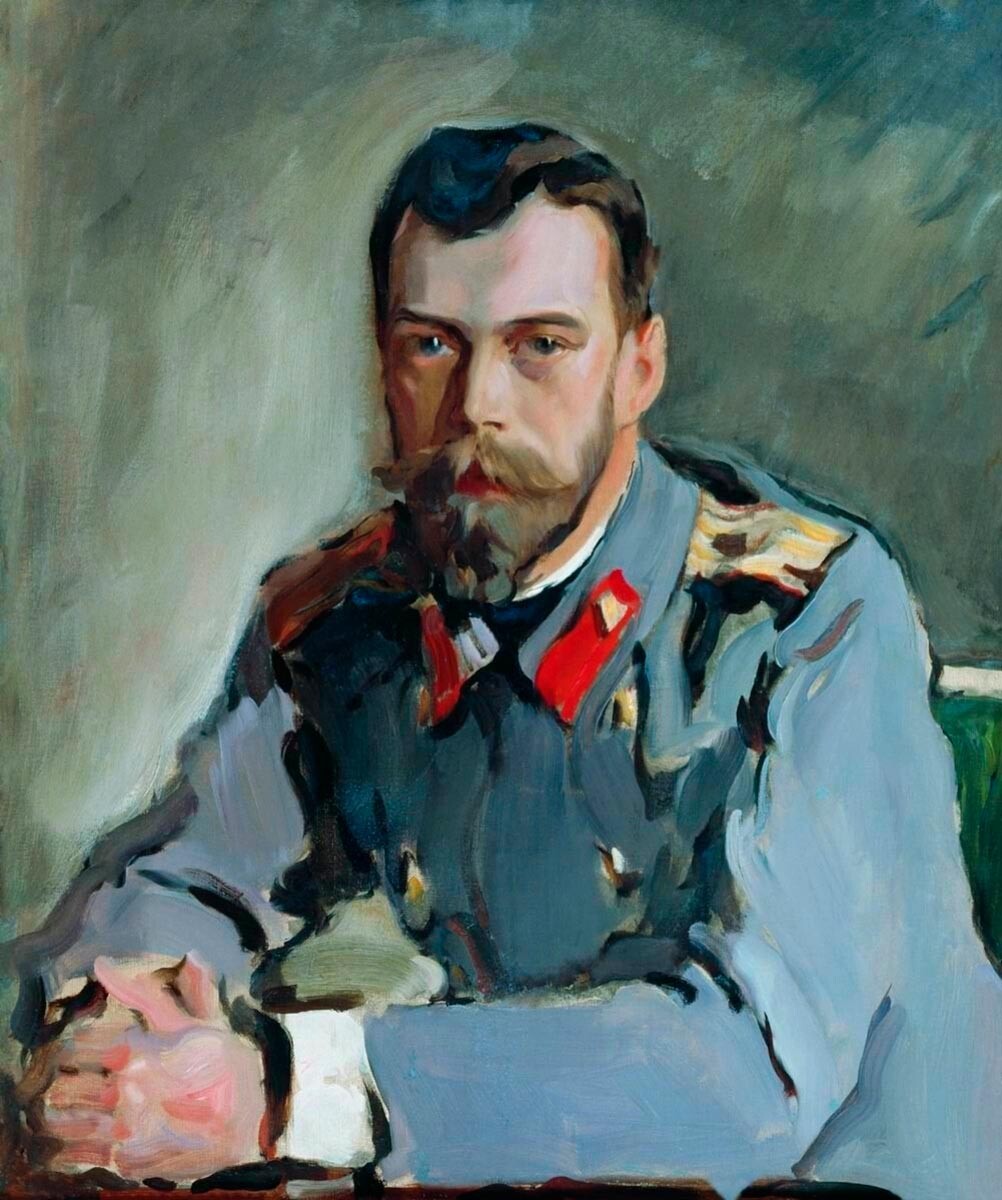 Valentin Serov, the author of the famous ‘Girl with Peaches’, was one of the court portraitists, having painted images of Alexander III, Grand Princes and others. In this unfinished portrait, Nicholas II is dressed in an officer’s jacket of the Preobrazhensky Regiment. 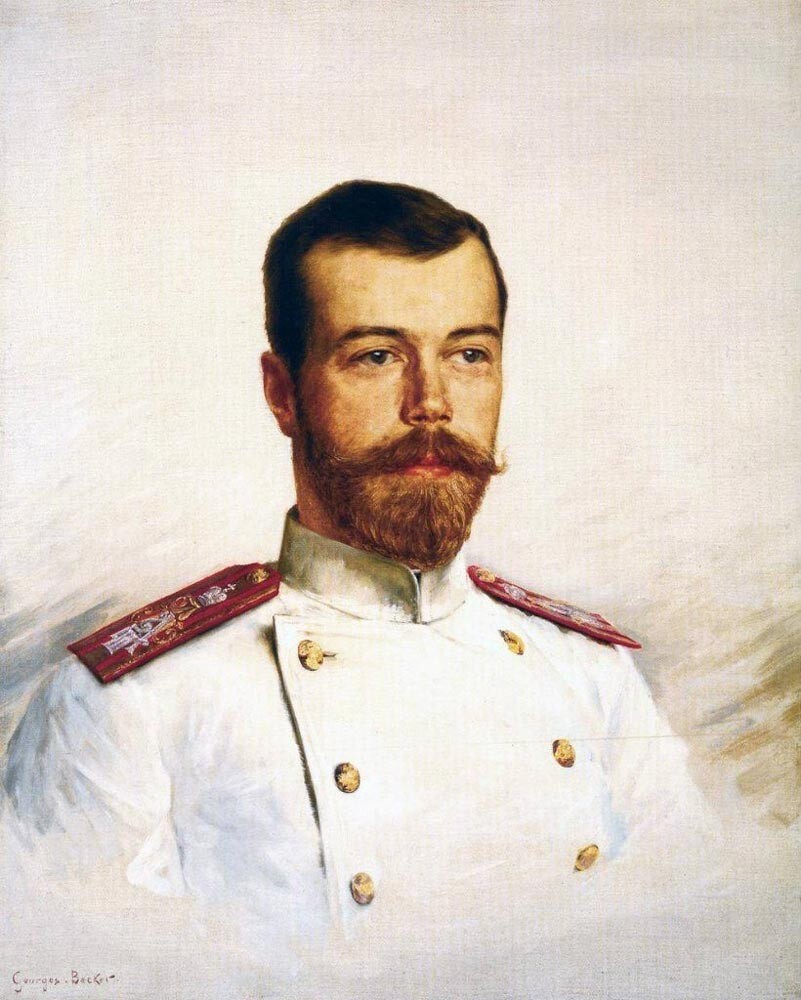 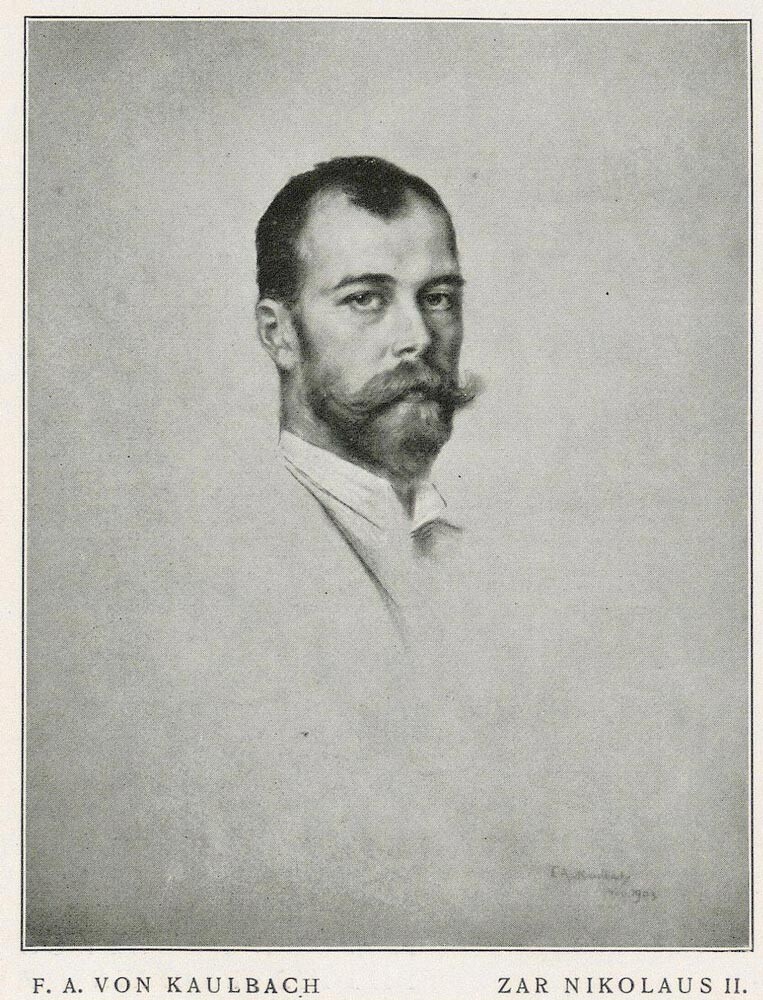 And this German artist made a rare portrait depicting the tsar not in the military uniform, but in a civilian dress. 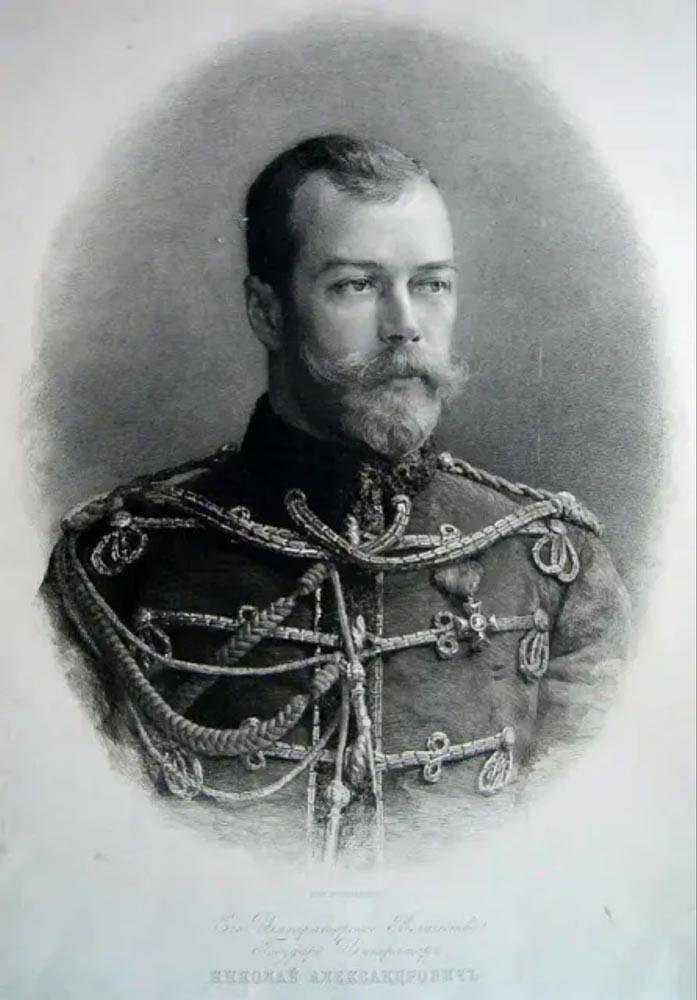 An academician of engraving, Rundaltsov created several images of Nicholas II and his son, Prince Alexei. This portrait shows the tsar in an incredibly thoughtful mood.

Elena Samokysh-Sudkovskaya. The Tsar and His Family, 1902 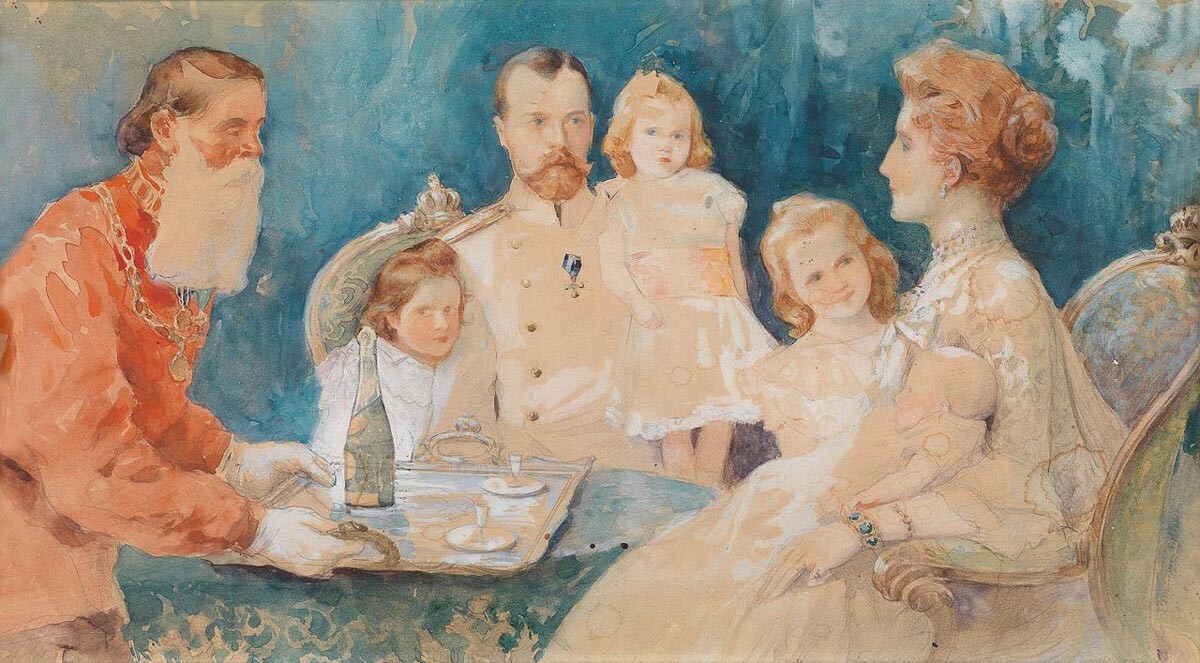 A painter with French roots, Samokysh-Sudkovskaya was most famous for her book illustrations, especially for Alexander Pushkin’s ‘Eugene Onegin’ novel in verse. She also made several sketches for the Coronation album of Nicholas II and Empress Alexandra. Pictured with daughters: Olga, Tatiana, Maria und Anastasia. 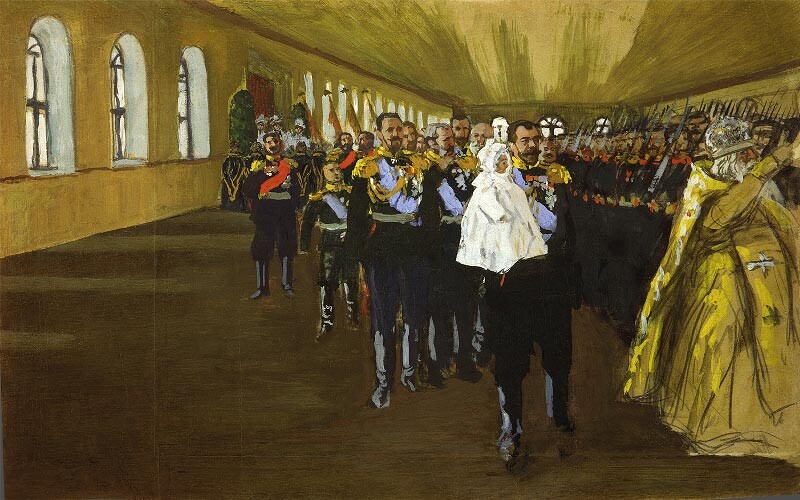 After four daughters, Nicholas and his wife were waiting for a son to be born and, for several years, they couldn’t manage to get pregnant, but finally, in 1904, the long-awaited heir to the throne was born… the very last Russian crown prince. 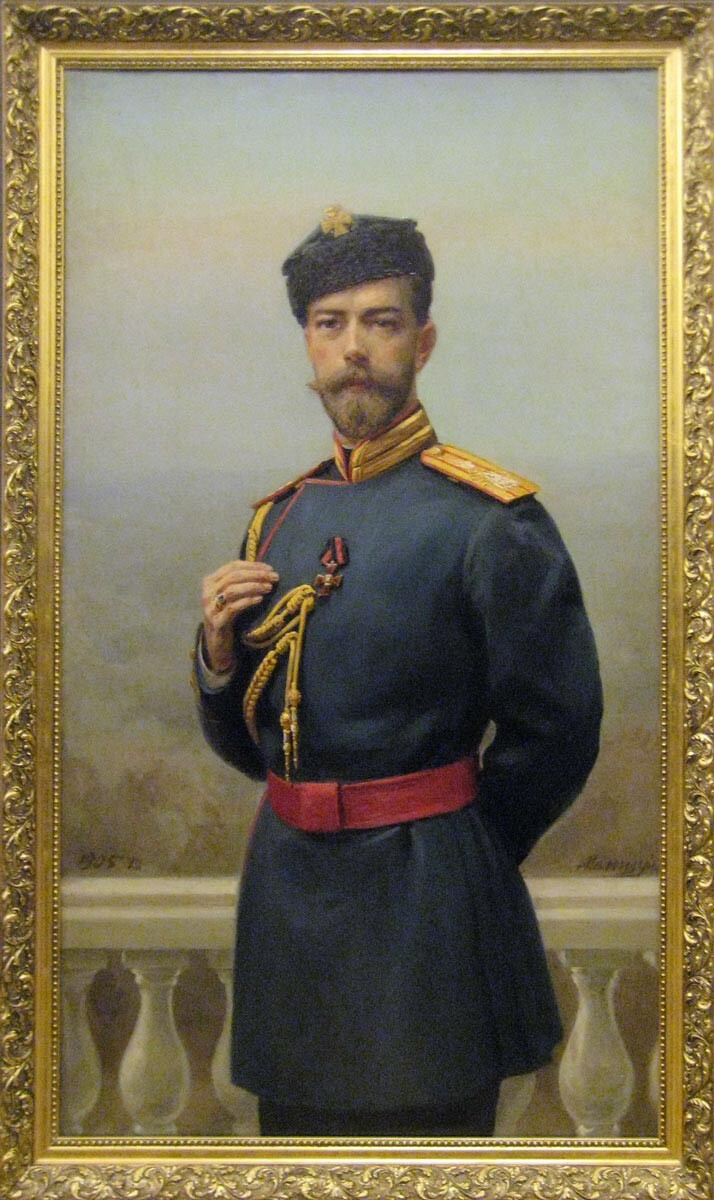 This Russian artist with German roots was one of the favorite painters of the Romanov family. Nicholas’s father, Tsar Alexander III, bought several of his paintings depicting the Russo-Turkish war. And this portrait was ordered to be painted by Nicholas II himself.

Alexander Makovsky. Portrait of Emperor Nicholas II and a study for it, 1907 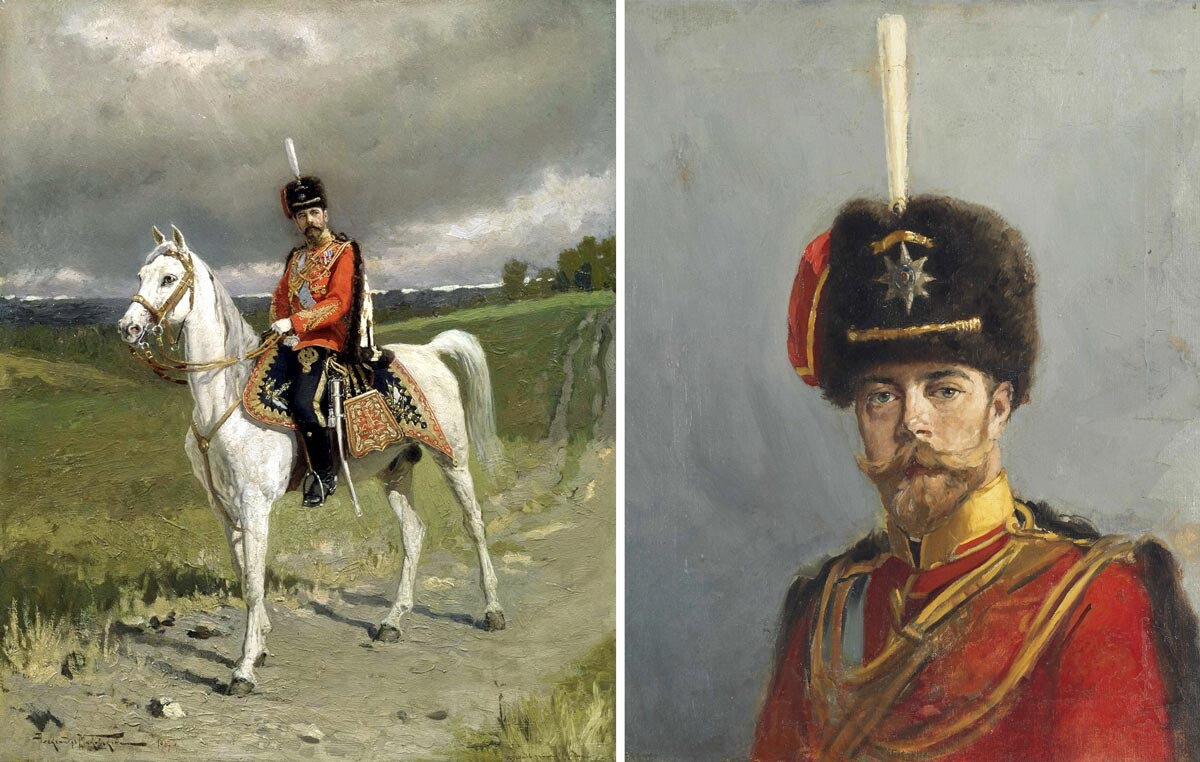 A member of the artistic family of Makovsky, this painter featured Nicholas II in the uniform of His Imperial Majesty’s Life Guards Hussar Regiment. 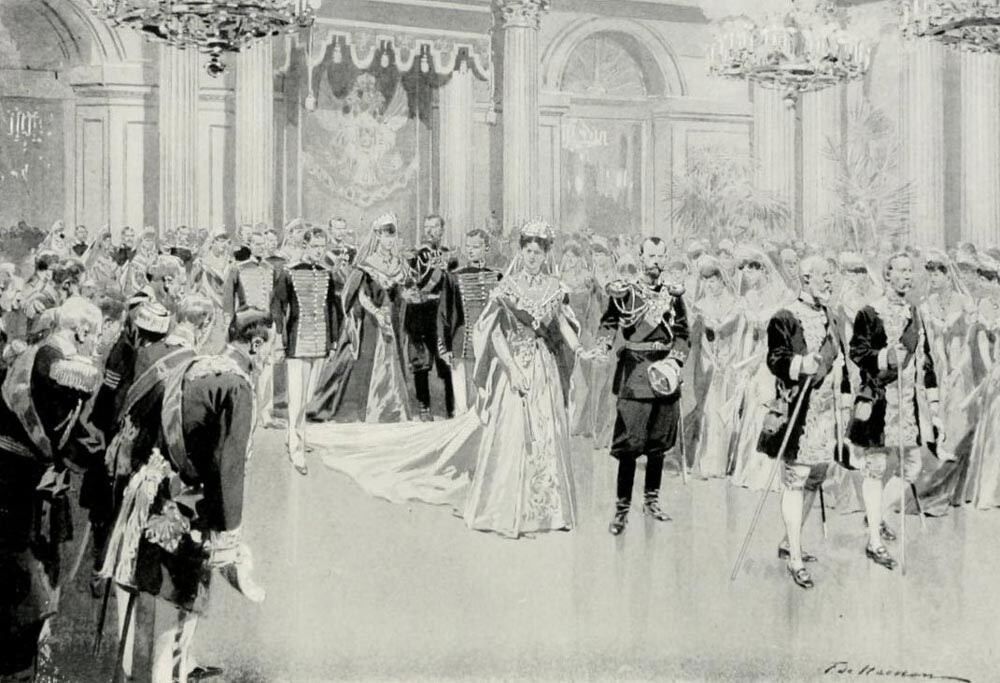 A French artist and illustrator with Dutch roots, Frédéric de Haenen was a head of the L’Illustration magazine in Paris. After a big tour across Russia that he made in 1913 he issued an illustrated book called Russia, where he highlighted ordinary people, churches, the Kremlin, the Trans-Siberian train and, of course, the Emperor. 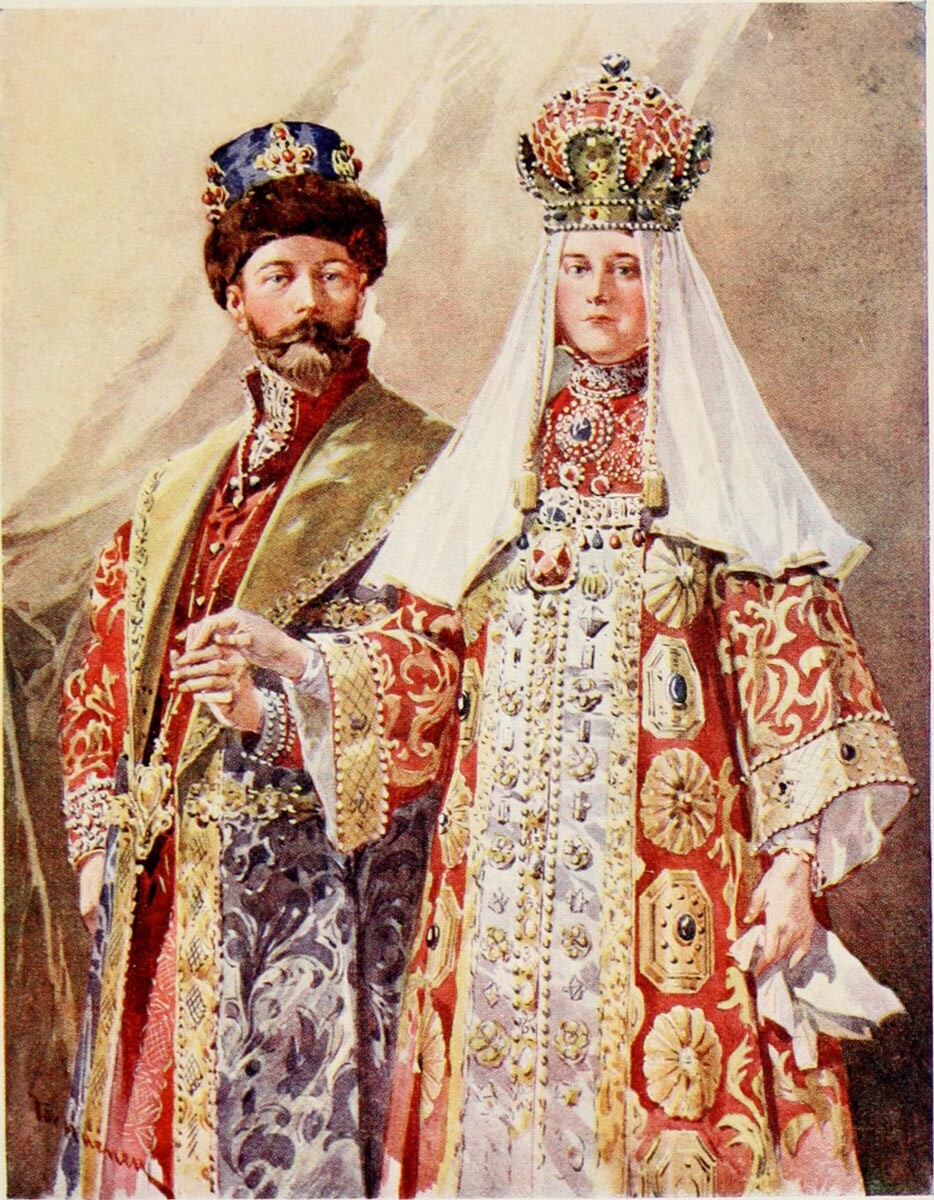 Nicholas II and his wife featured in the ancient Russian tsar dresses during a costumed ball that was celebrating the anniversary of the Romanov house in 1903. 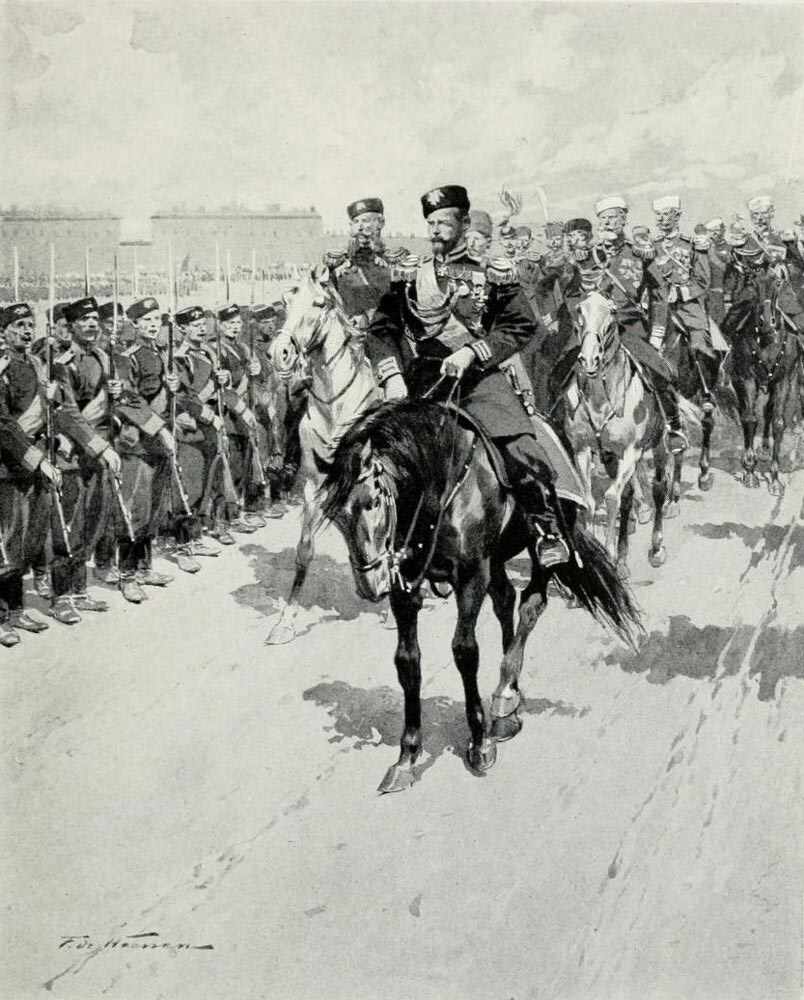 This is another painting by the French artist featuring the tsar. Nicholas II arranged annual reviews of the troops, most often during the large-scale military exercises. 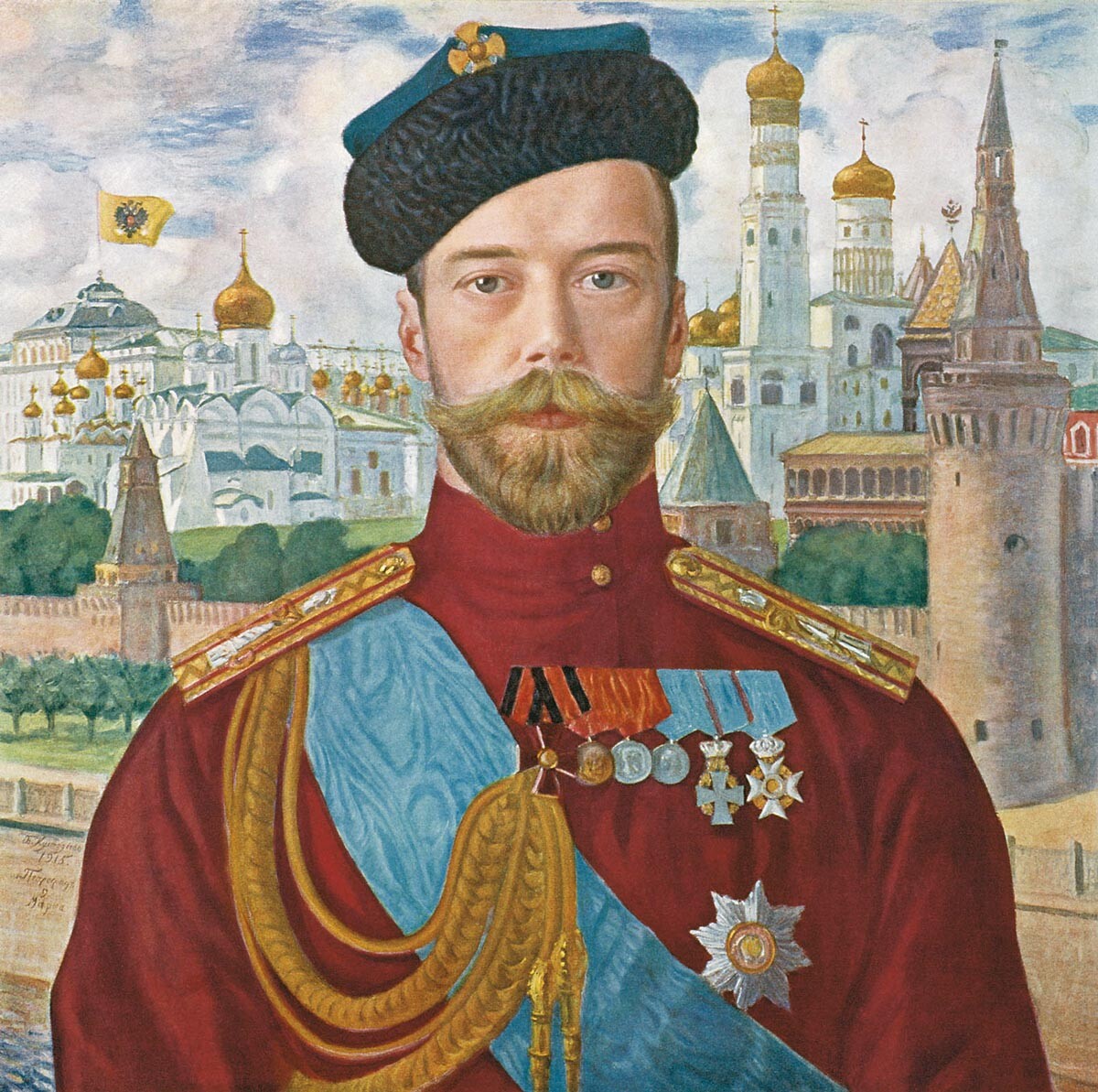 Boris Kustodiev is famous for his stylization of Russian folk and merchant life with a pure riot of colors and the tsar’s portrait is created in the artist’s recognizable style, showing the fairy tale Moscow Kremlin in the background. 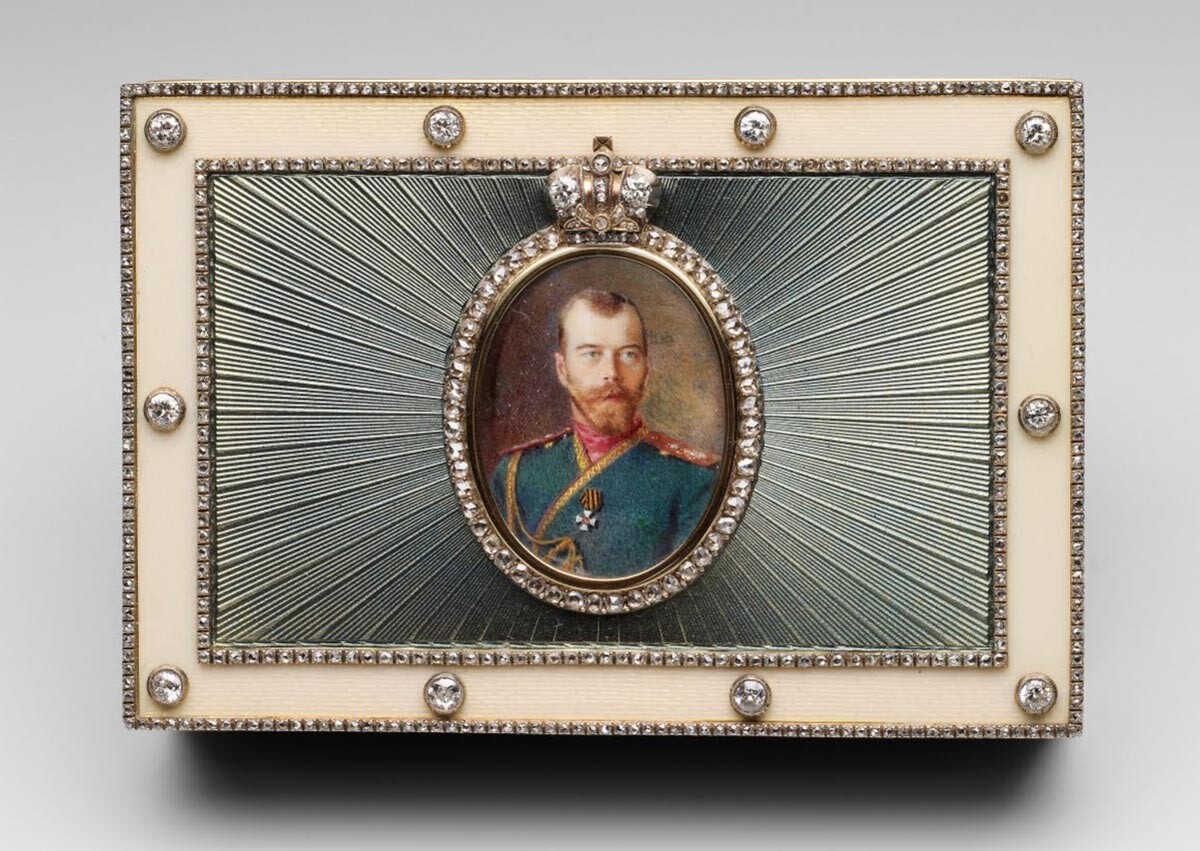 The box created by Faberge’s head jeweler Henrik Wigström was decorated with the Emperor’s portrait painted by the court miniaturist Vassily Zuiev. Nicholas II wears the uniform of the 4th Imperial Family Rifle Guards and the Order of St George, which he received on 25 October 1915. This box was presented on behalf of the tsar to Gabriel Hanotaux who used to be the French Minister of Foreign Affairs between 1894 and 1898.