History of Russia in 10 paintings 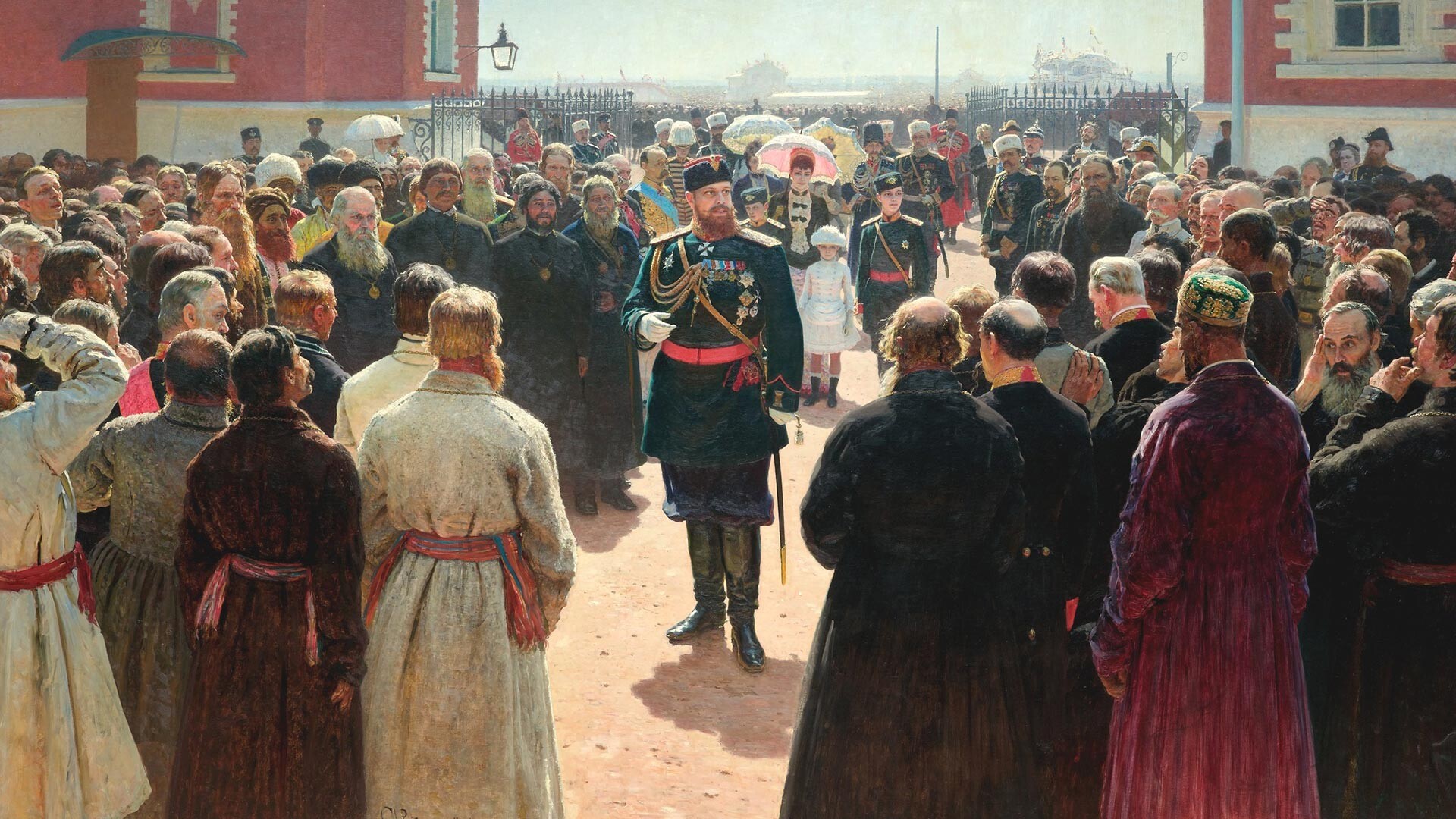 The State Tretyakov Gallery
These Russian artists have depicted the most life-changing and dramatic events of Russia’s ten centuries of existence. 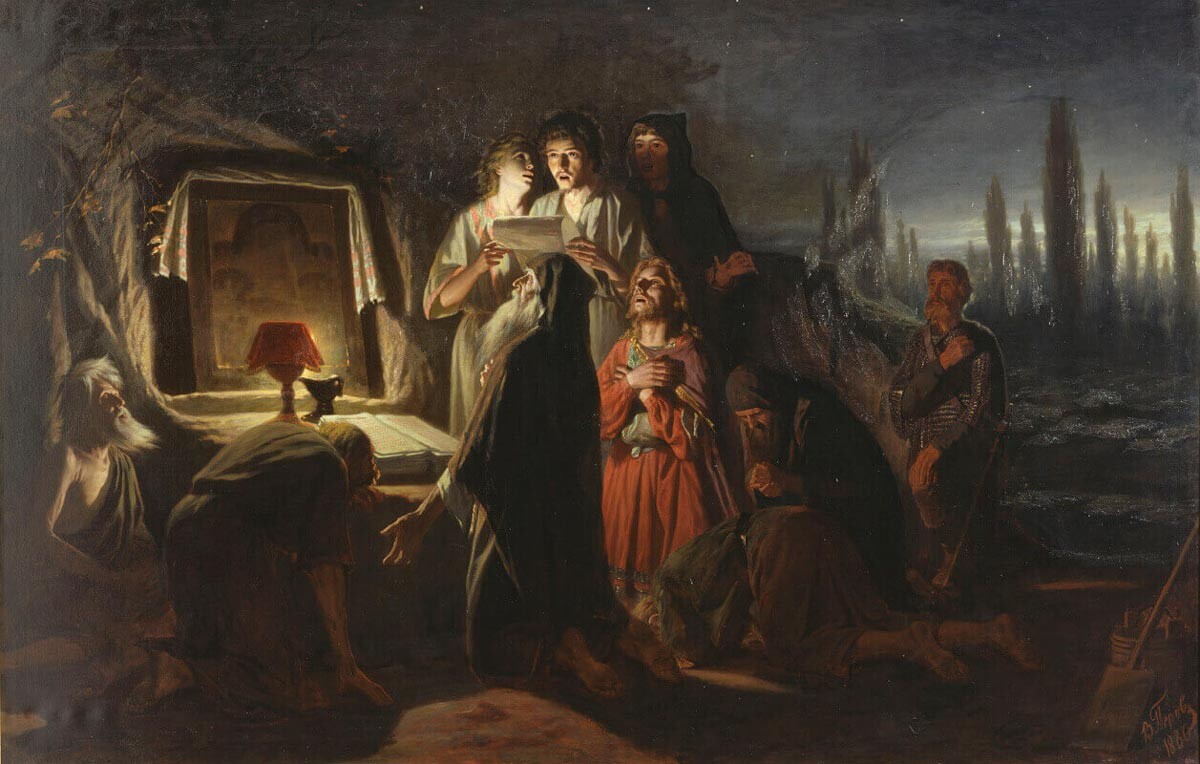 Coming from the Byzantine Empire, Christianity began to spread across Russia long before the official baptism of the country by Kievan prince Vladimir in 988. According to some sources, as early as in the end of the 9th century, Kievan rulers Askold and Dir adopted the new faith, together with the nobility and a part of the people. The baptism of Princess Olga, who ruled Kievan Rus’ in the middle of the 10th century, is also a known fact.

The first military conflict between Russia and the Mongol Empire occurred on May 31, 1223, at the Kalka River (located in present-day eastern Ukraine). Uniting with the nomadic Kipchaks, the Russians tried to stop the invaders on the outskirts of their lands, but suffered a crushing defeat: twelve princes were killed and only a tenth of the entire army survived. However, despite the defeat, the invasion of Russia by the Mongols did not follow right then - it happened only fourteen years later.

3. Mikhail Avilov. The duel between Peresvet and Chelubei at the Kulikovo Field (1943) 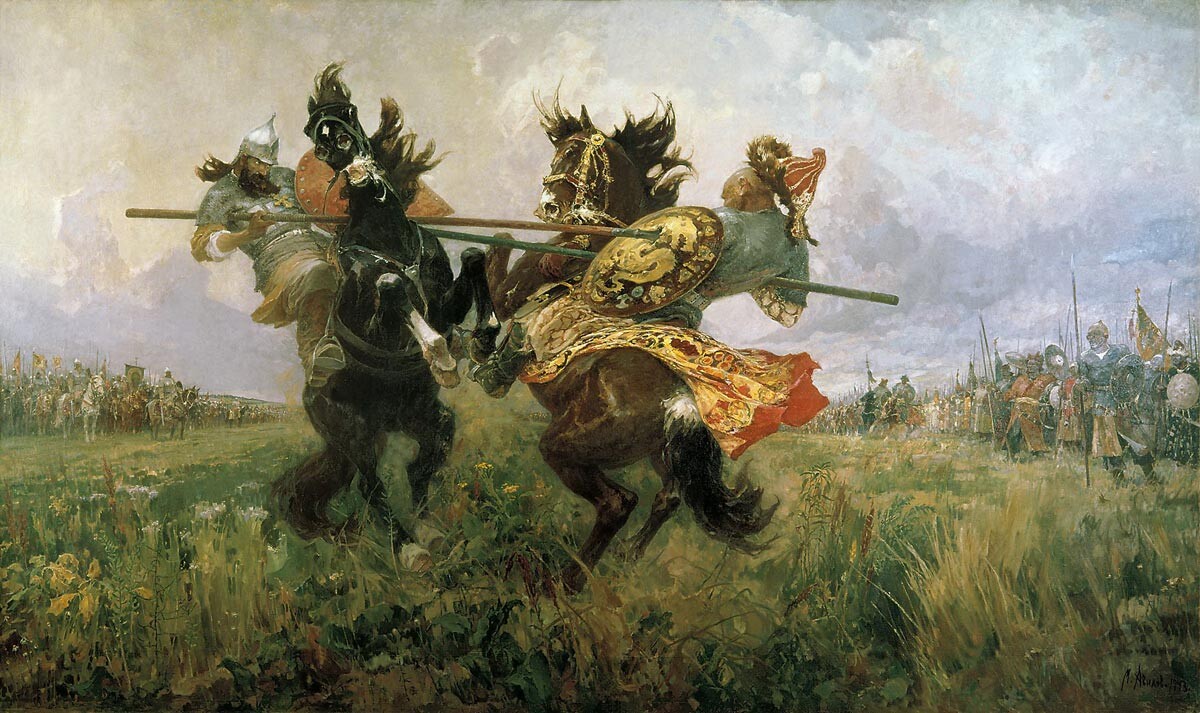 On September 8, 1380, Dmitry Ivanovich, Prince of Moscow, defeated the army of the Mongolian temnik (warlord) Mamay in the battle at the Kulikovo Field (270 km south of Moscow), thus making an important step in freeing Russia from the rule of the Khans. According to legend, the battle was preceded by a duel between the strongest warriors from both sides: the monk Peresvet and the warrior Chelubei. The enemies stabbed each other to death with spears, after which Chelubei immediately fell out of his saddle, while the monk’s horse trotted its deceased master back to the ranks of the Russian army. 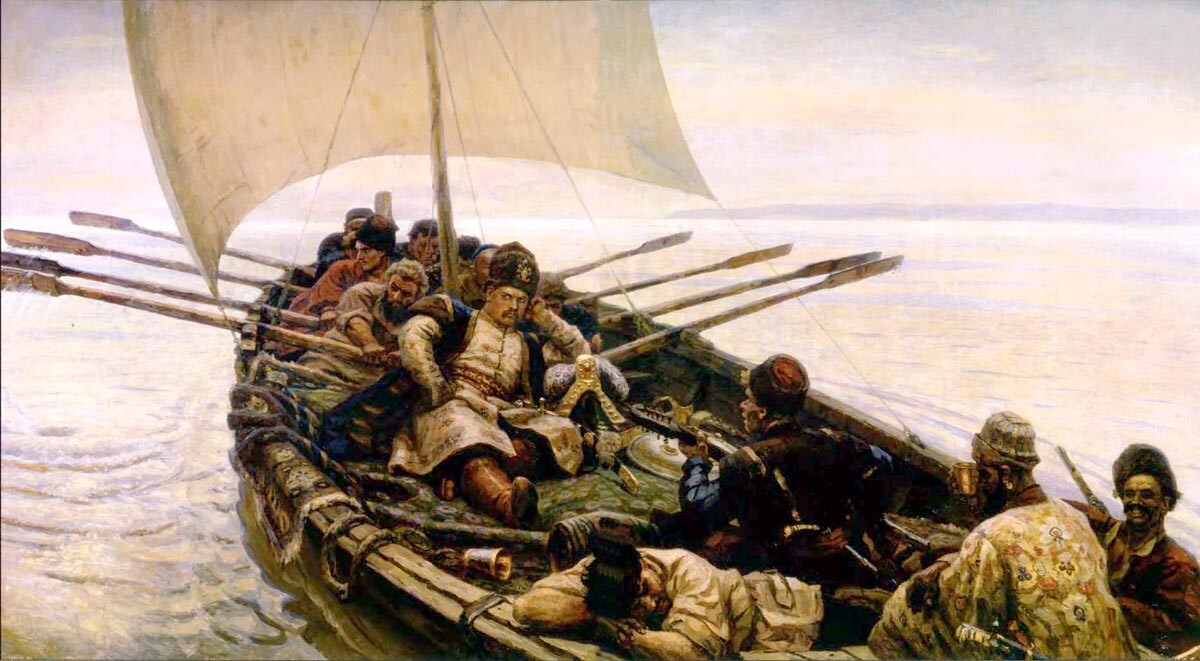 In the late 1660s, a large-scale rebellion of peasants and Cossacks who opposed the strengthening of feudal oppression swept through Russia. The leader of this so-called ‘Peasant War’ was the Cossack ataman Stepan Razin. The rebels successfully operated in the Volga River basin area and were even about to march on Moscow, but were defeated near the walls of Simbirsk (present-day Ulyanovsk). Razin himself was captured in April 1671 and immediately sent to the capital. After being brutally tortured, he was dismembered on the Red Square. 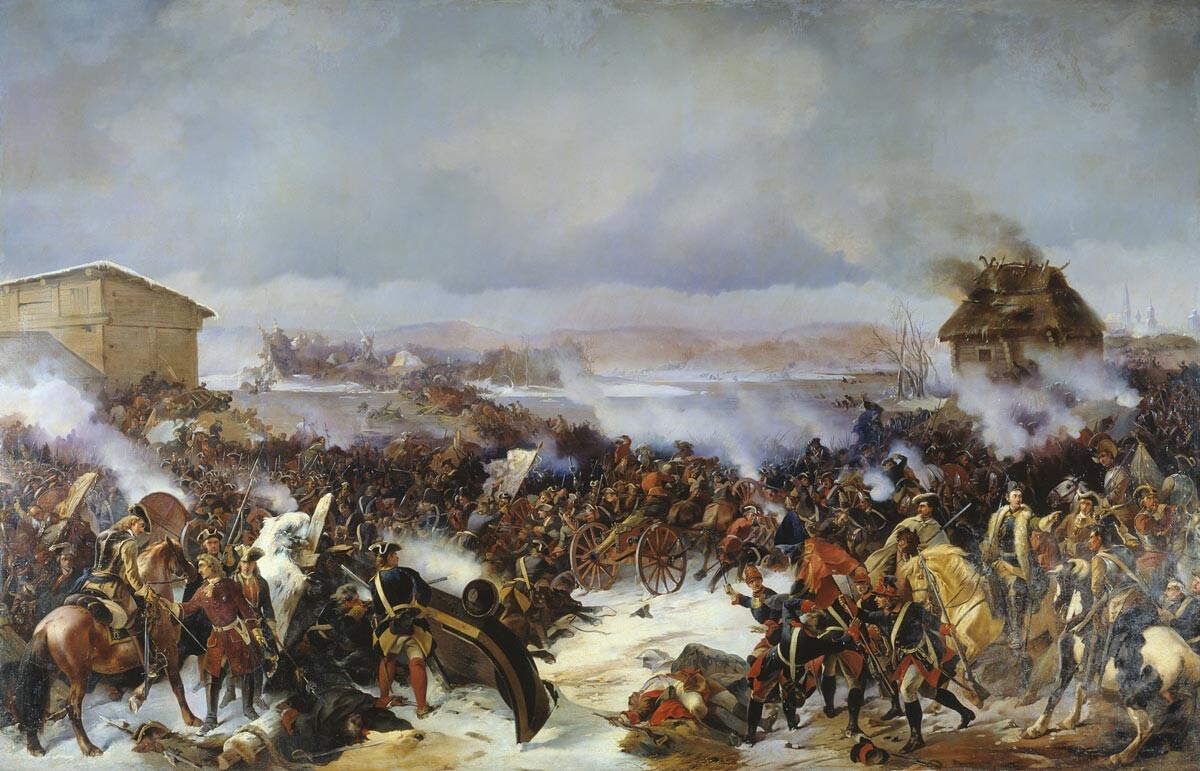 The Military­-Historical Museum of Artillery, Engineer and Signal Corps

In the early 18th century, Russia, Saxony, the Polish-Lithuanian Commonwealth and the Dano-Norwegian Realm challenged Swedish supremacy on the Baltic Sea. Nevertheless, the Great Northern War did not begin smoothly for the allies. On November 30, 1700, in the Battle of Narva, a young king Charles XII defeated the Russian army. However, victory played a cruel joke on the Swedes: they believed Tsar Peter I was off the board. In reality, after experiencing the shameful defeat at Narva, the monarch began to modernize and rearm his army, which eventually led to his triumph at the Battle of Poltava in 1709. 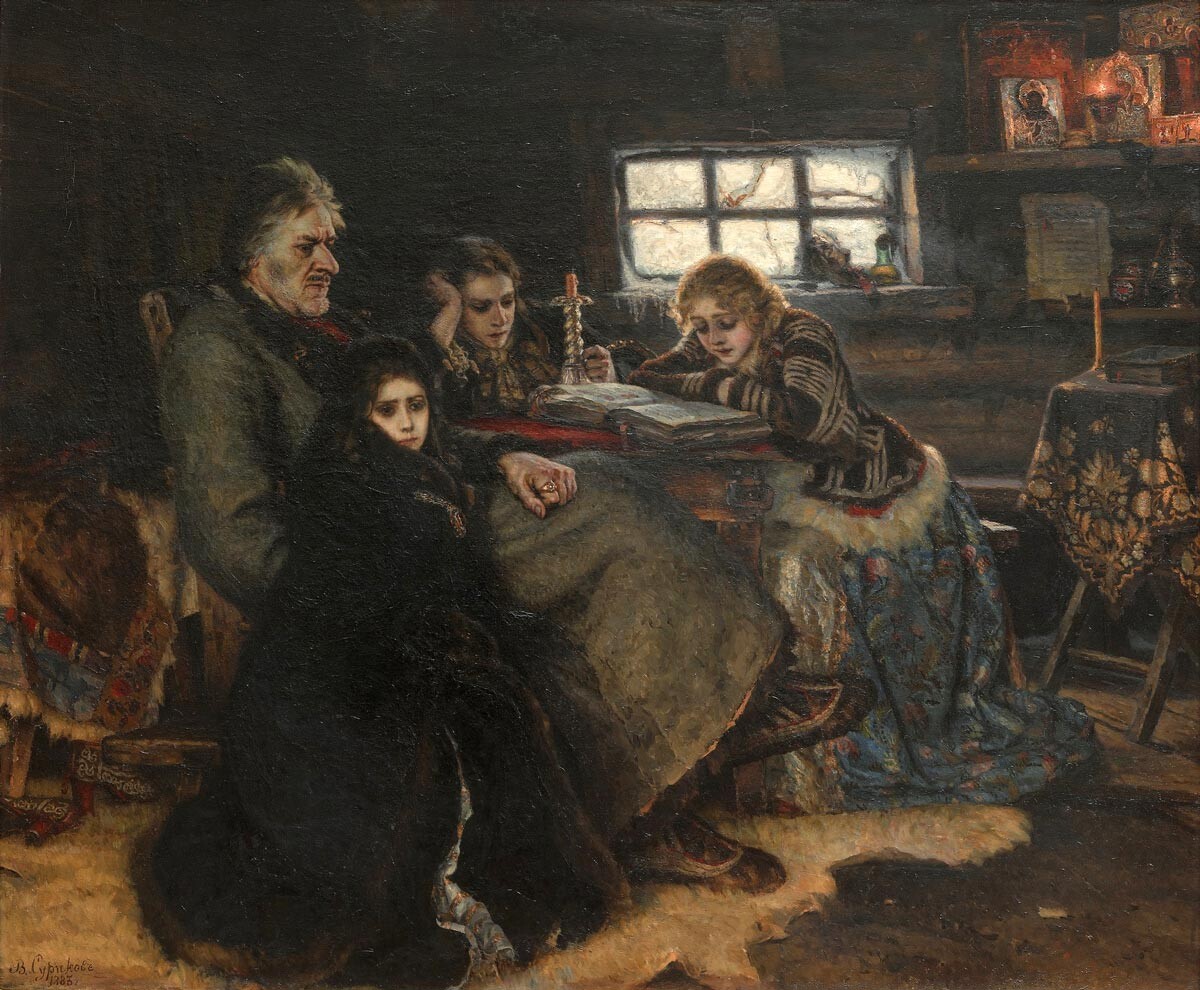 Alexander Menshikov, a close associate of Peter the Great, was one of the most influential Russian state officials in the first half of the 18th century. The prince de facto became the country’s leader after Peter’s death in 1725, when his wife, Catherine I, ascended the throne. Menshikov’s reign, however, was very short. After the death of the Empress in 1727, he lost the struggle for power and was exiled to Siberia, where he died two years later.

7. Vasily Vereshchagin. Napoleon and Marshal Lauriston (Peace at all costs) (1900) 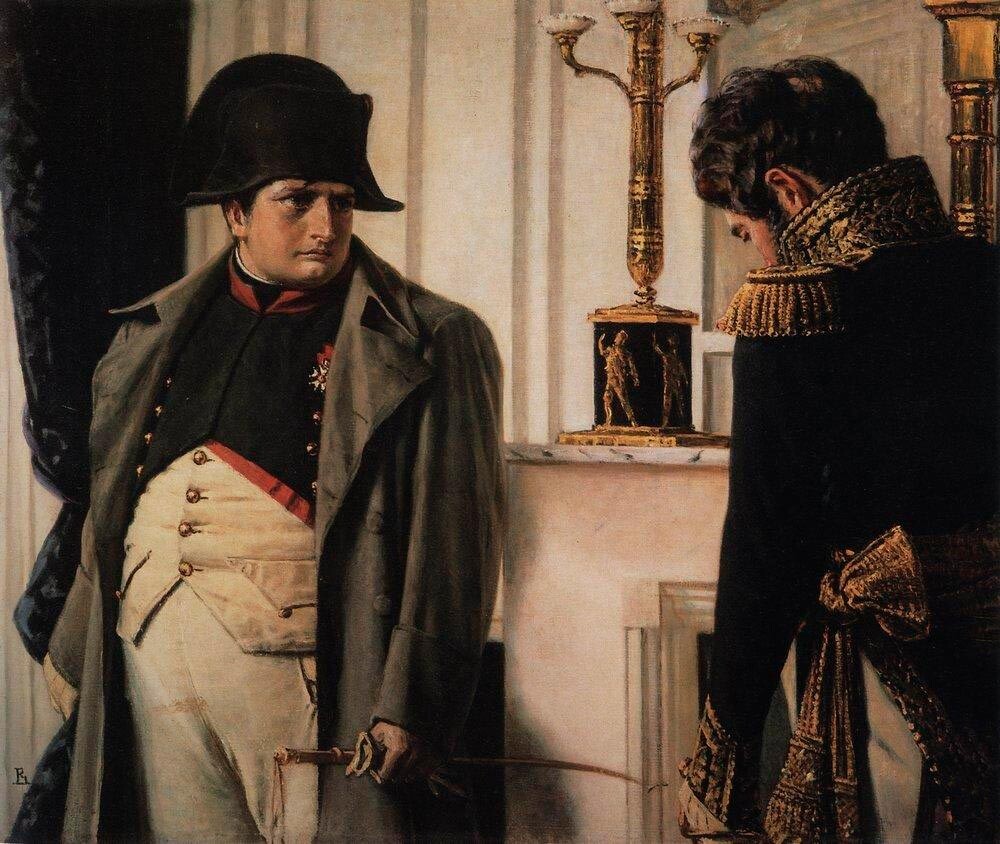 The capture of Moscow by Napoleon's Grande Armée during the Patriotic War of 1812 did not lead to Russia’s capitulation, as the French emperor had hoped. For nearly three weeks, Bonaparte remained in the city, waiting in vain for envoys from Tsar Alexander I with proposals for peace. Meanwhile, as the cold weather approached, the situation for his army began to become critical. On October 3, he sent Count Jacques Alexandre Lo de Ariston to the Commander-in-Chief Mikhail Kutuzov at the camp of the Russian army near the village of Tarutino with the words: “I need peace, I need it absolutely at all costs, just save our honor.” However, an agreement with the Russians was not reached and, on October 19, the Grande Armée left Moscow. 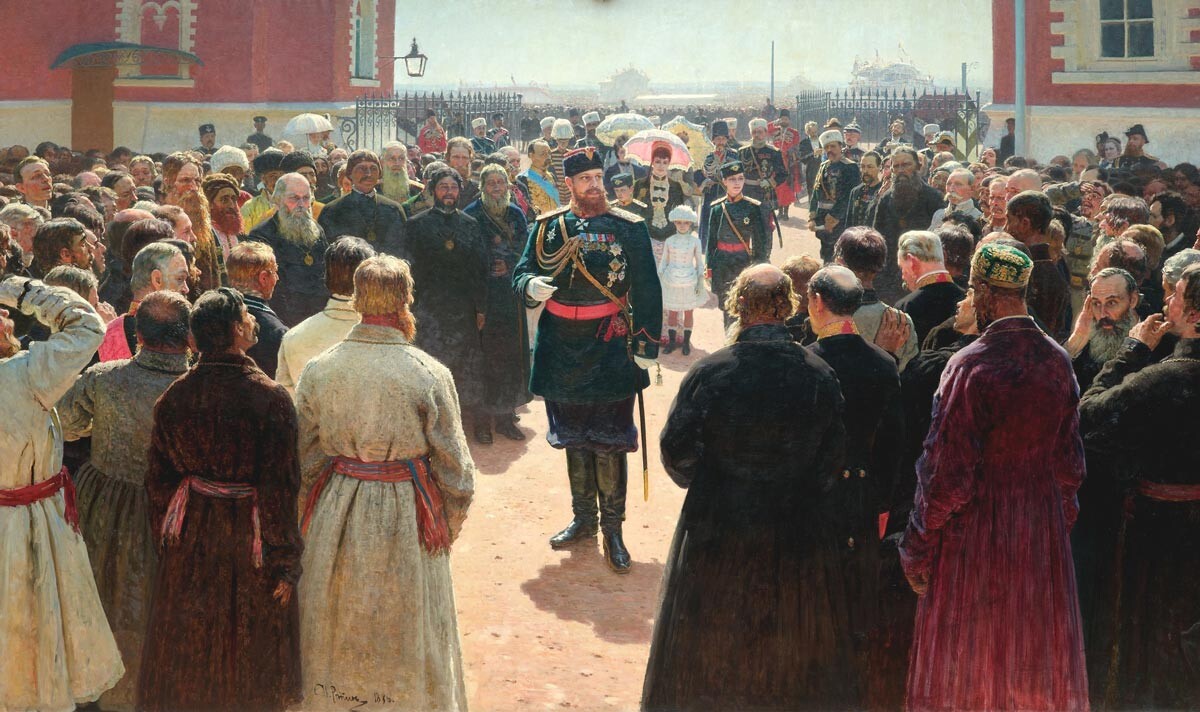 The reign of Emperor Alexander III (1881-1894) was one of the calmest periods in the history of Russia - the empire did not wage a single war. Nicknamed ‘Peacemaker’, the tsar formed a military-political alliance with France, which laid the foundation of the future Entente. However, it took somewhat longer to come to terms with the British. Cooperation with them was not established until the 1900s, under the reign of Nicholas II. 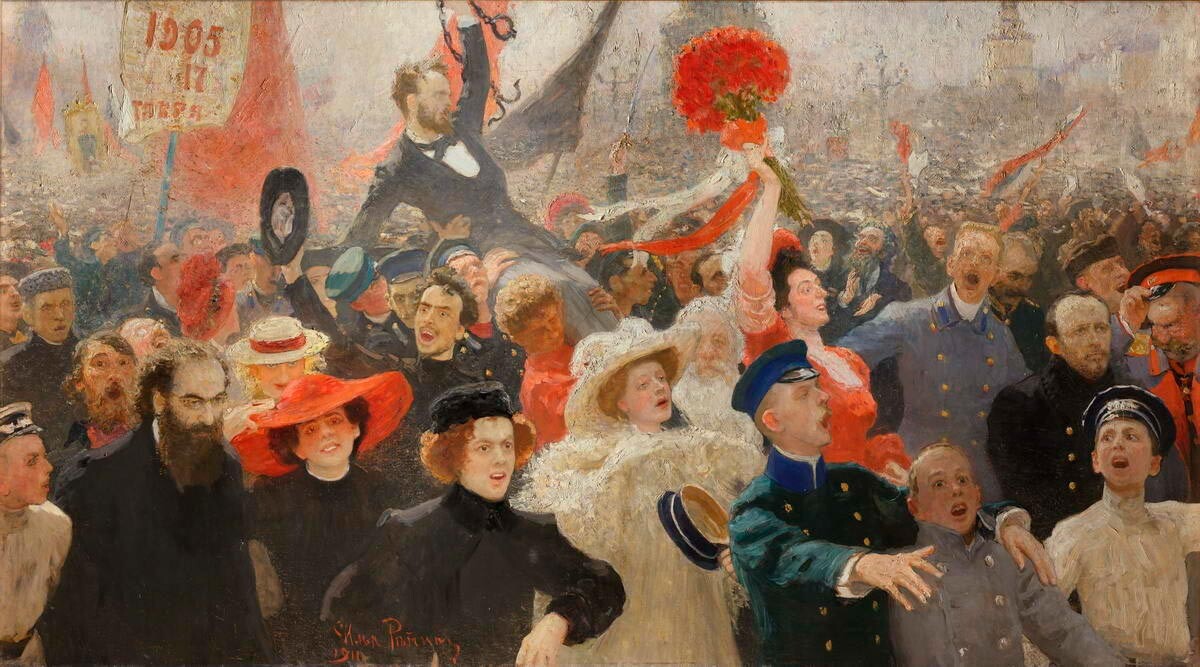 After a heavy defeat in the war against Japan came the First Russian Revolution of 1905-1907. Unable to cope with the rising tide of public discontent, the authorities began to backtrack. On October 17, 1905, Nicholas II issued a manifesto that granted freedom of conscience, speech, assembly and association, expanding the powers of the State Duma and transforming it from an advisory body into a legislative one. Nevertheless, since the autocrat later did everything possible to somehow eliminate the limitations of his power, social tensions among Russians persisted until the Revolution of 1917.

10. Mikhail Khmelko. The Triumph of the Victorious Motherland (1949) 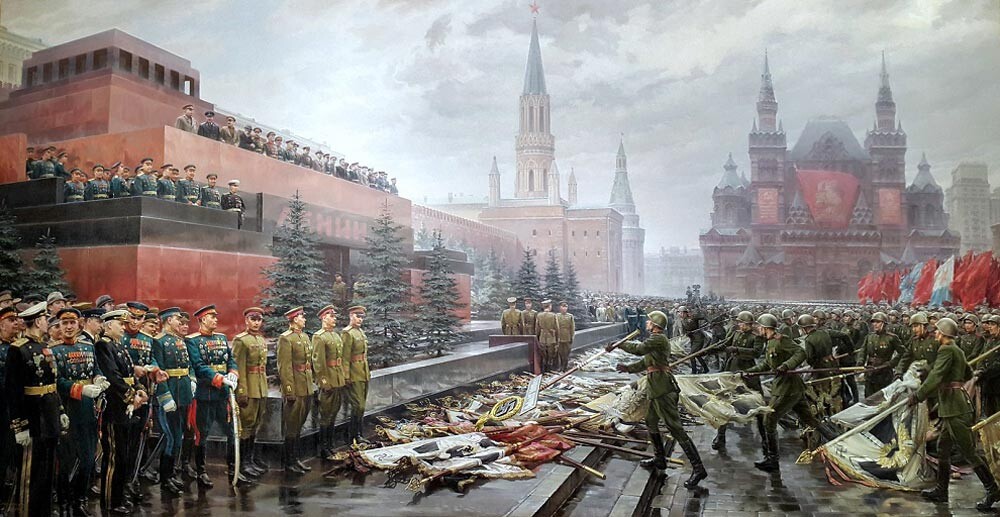 On June 24, 1945, a parade commemorating the Soviet Union’s victory over Nazi Germany in the Great Patriotic War was held on the Red Square. Two hundred captured German flags and banners were thrown at the foot of the Mausoleum, on top of which the country’s leadership and top Soviet military commanders were standing. According to one version, historian Eugene Tarle suggested such a ceremony to Stalin, telling him about a Roman tradition of throwing banners of the defeated enemy at the feet of Caesar.