The history of Russia in 14 famous paintings

History
Alexandra Guzeva
From the founding of Russian statehood to World War II, artists have always been fascinated by pivotal events in the country's history. Here are just a few of the masterpieces of Russian history painting.

1. Viktor Vasnetsov. The Invitation to the Varangians (1909) 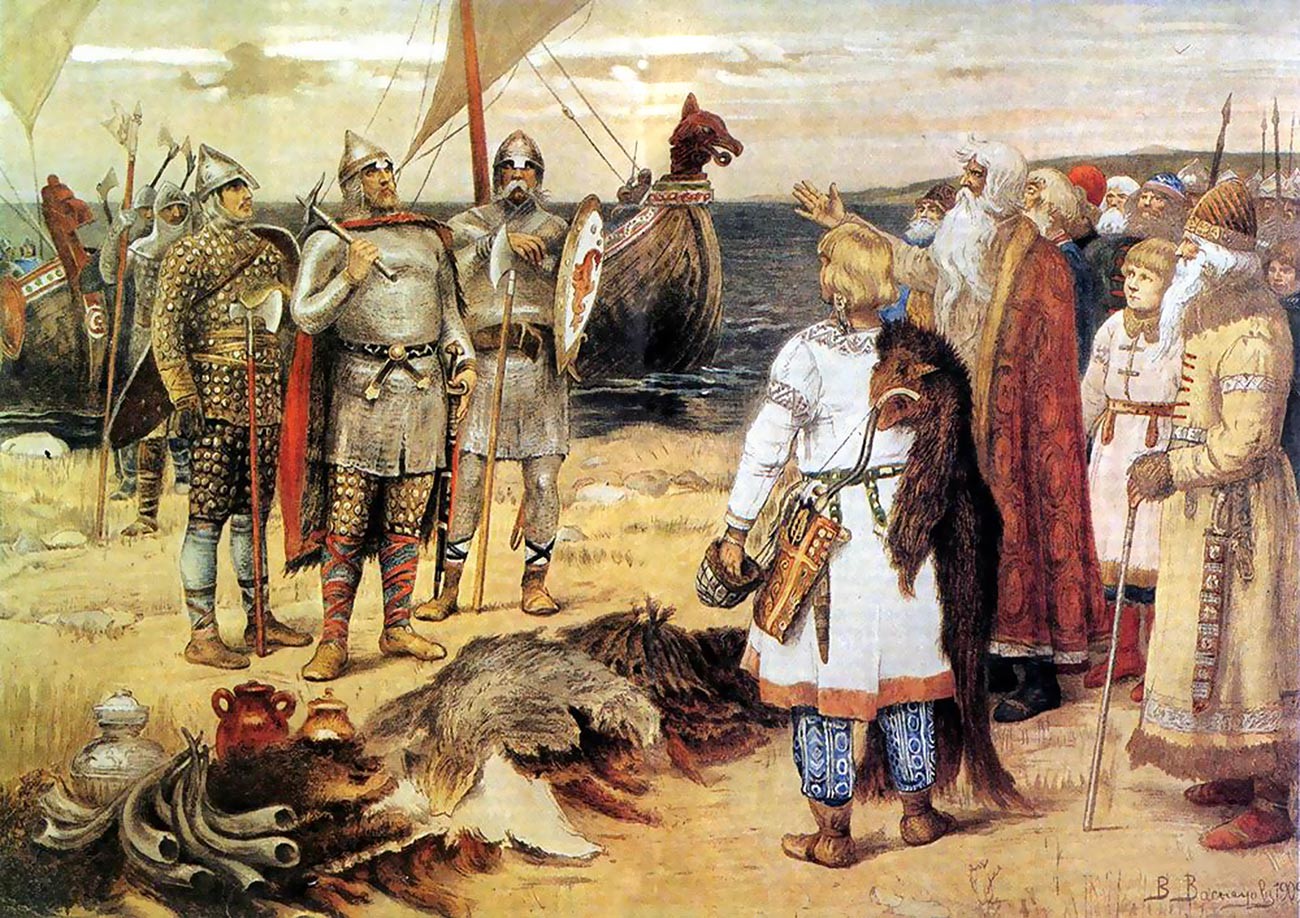 This painting was specially commissioned for school history books. Its subject is the founding of the Russian state. According to the most widespread theory, the disjointed Slavic tribes failed to choose a single ruler and called on the Varangians to come and rule them, so that together they could more effectively defend themselves against enemy raids. This was how Prince Rurik and his brothers arrived in Rus' [Old Russia]. Read more: Who founded Russia and ruled it before the Romanovs? 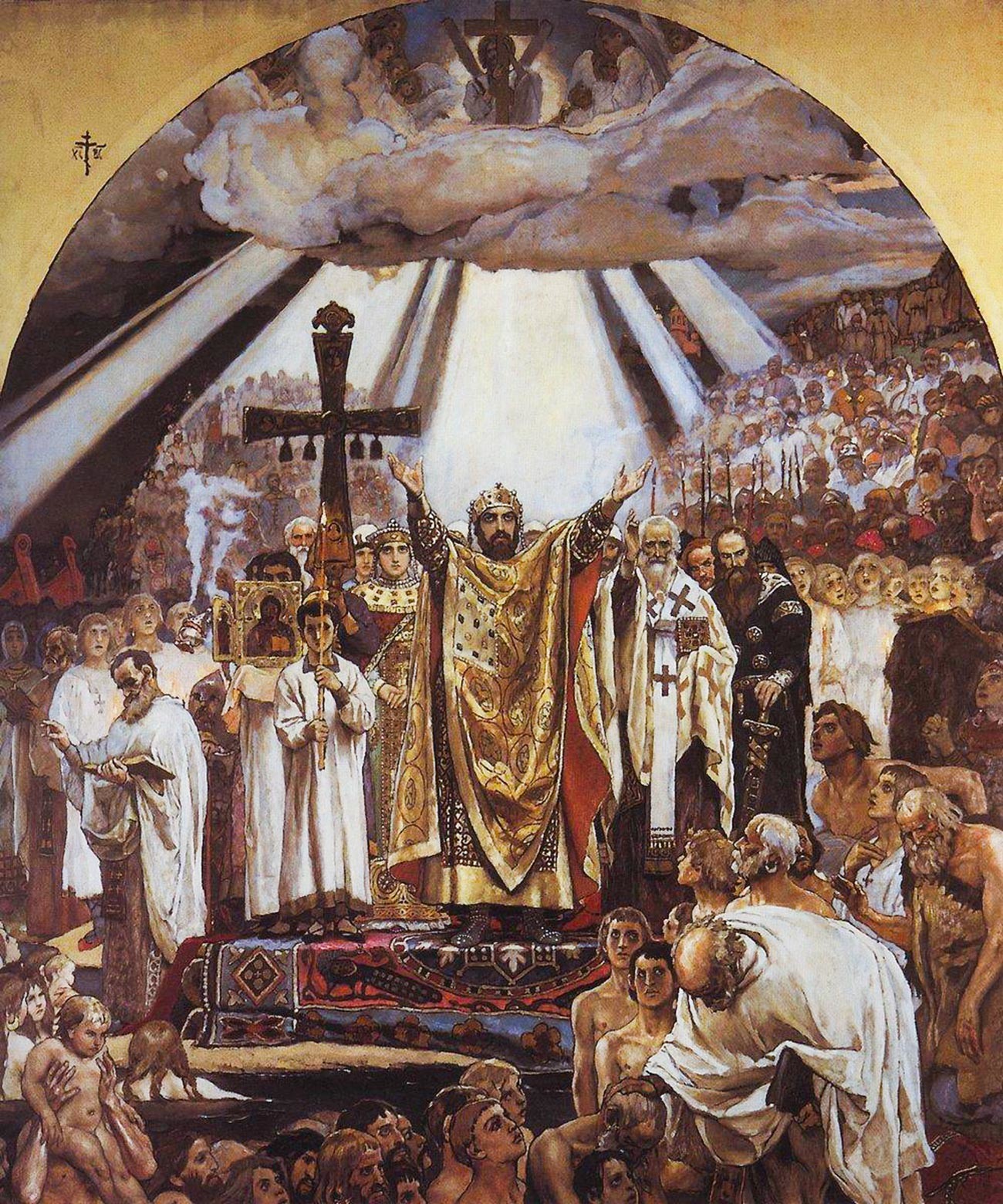 This picture is a copy of Vasnetsov's monumental fresco in St. Vladimir Cathedral in Kiev. In the center is Prince Vladimir, who baptized Rus' and who is now revered as a saint in Orthodox Christianity. In the foreground are the first Kievans to be baptized in the River Dnieper. Read more: Were the Russians actually baptized TWICE?

One of the most important events of the 16th century was the conquest of Siberia by Cossack Ataman Yermak and his detachment of men. The painting depicts a battle between the Cossacks and the army of the Khan of Sibir. Read more about Yermak, the guy who conquered Siberia 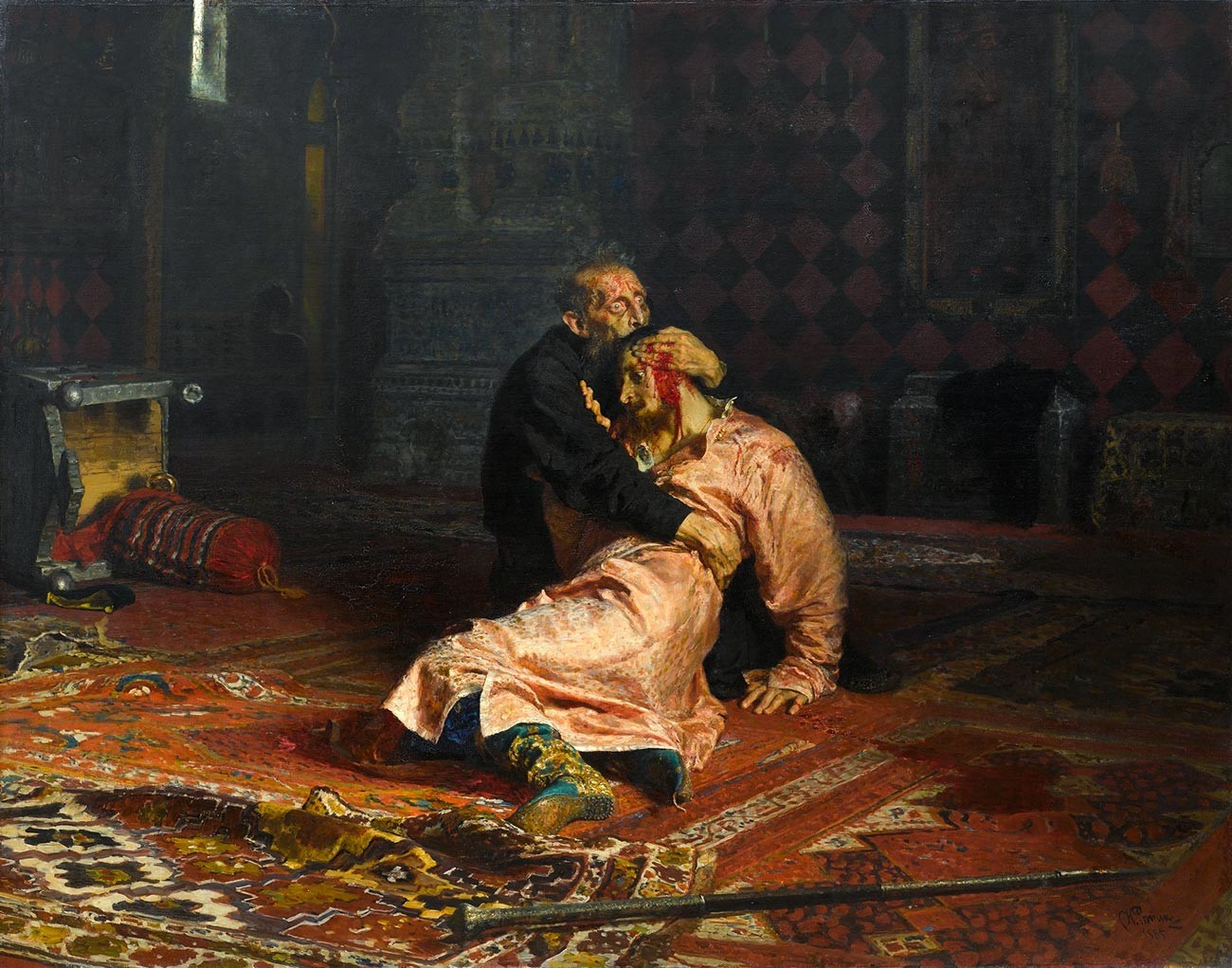 One of the best known historical paintings, the canvas tells the story of the death of Ivan the Terrible's son and heir in its popular version. Historians differ in their views of how it happened but, thanks to Repin, the opinion took root in the popular imagination that the Russian Tsar accidentally struck his son with a staff during a quarrel. The death of the Tsarevich subsequently led to the demise of the Rurik dynasty and the Time of Troubles in Russia. Read more: 4 reasons why Tsar Ivan was called 'The Terrible'.

5. Vasily Surikov. The Morning of the Streltsy Execution (1881) 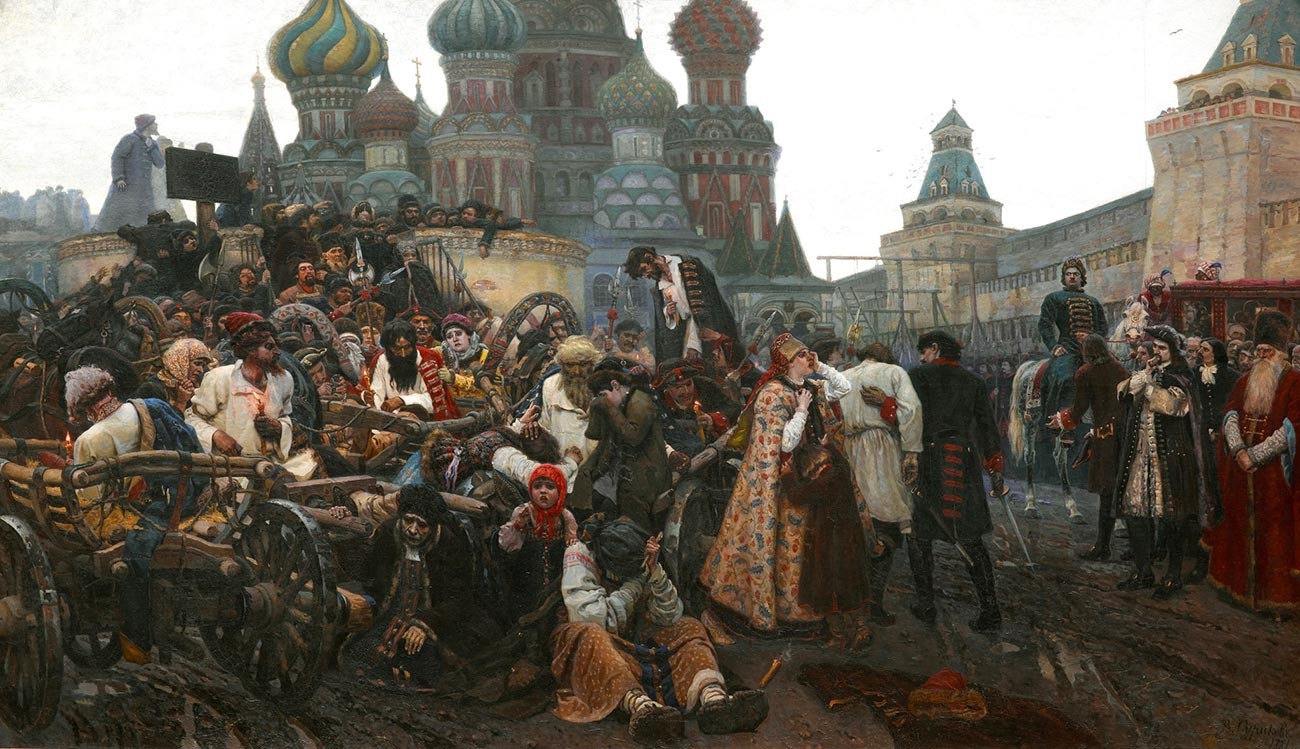 This large-scale canvas tells the story of the execution of 1,300 Streltsy [members of an influential Russian military corps] from Moscow's privileged regiments. This was how Peter I, at the beginning of his reign, dealt with the instigators of the 1698 Streltsy Uprising in a display of his autocratic power. 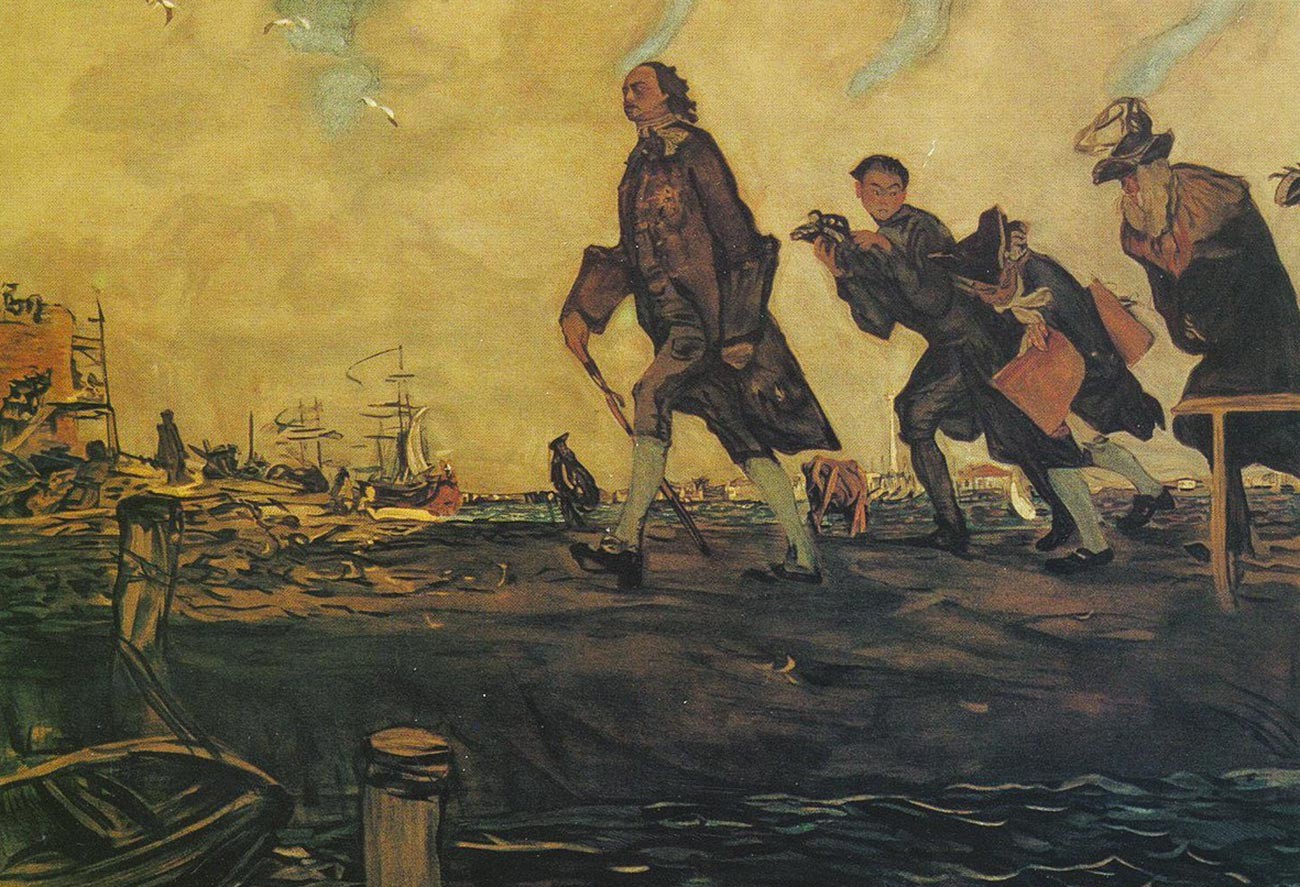 The picture depicts the construction of St. Petersburg and Peter imperiously striding through the swamps on which he ordered the city to be built. His entourage can't keep up with his confident  and forceful stride. 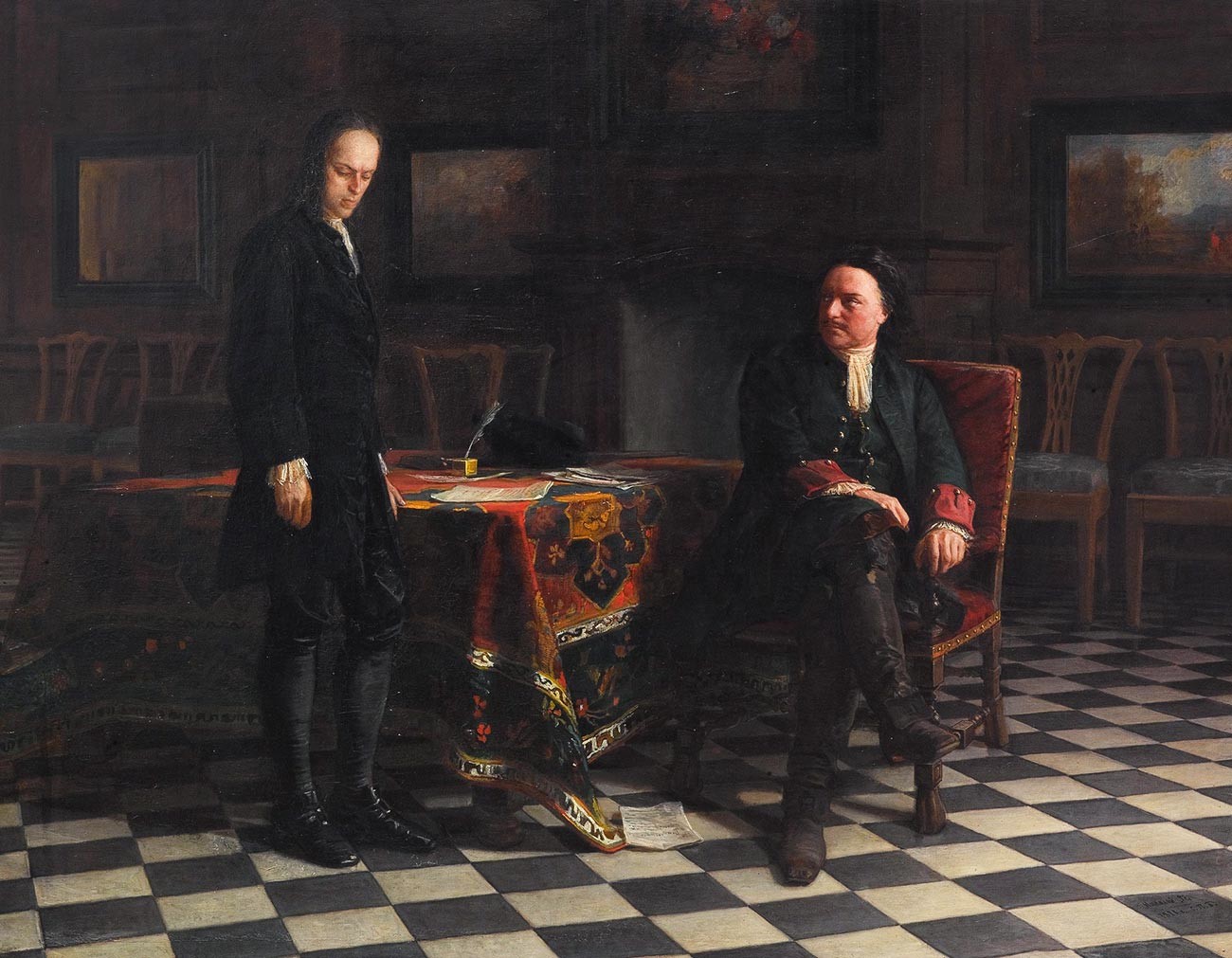 Another dramatic story on the theme of "fathers and sons" from Russian history. The Emperor accused his son of treason and of preparing to seize power in Russia. As a result, the Tsarevich was put in prison where he was tortured to death (it is believed with Peter's knowledge). 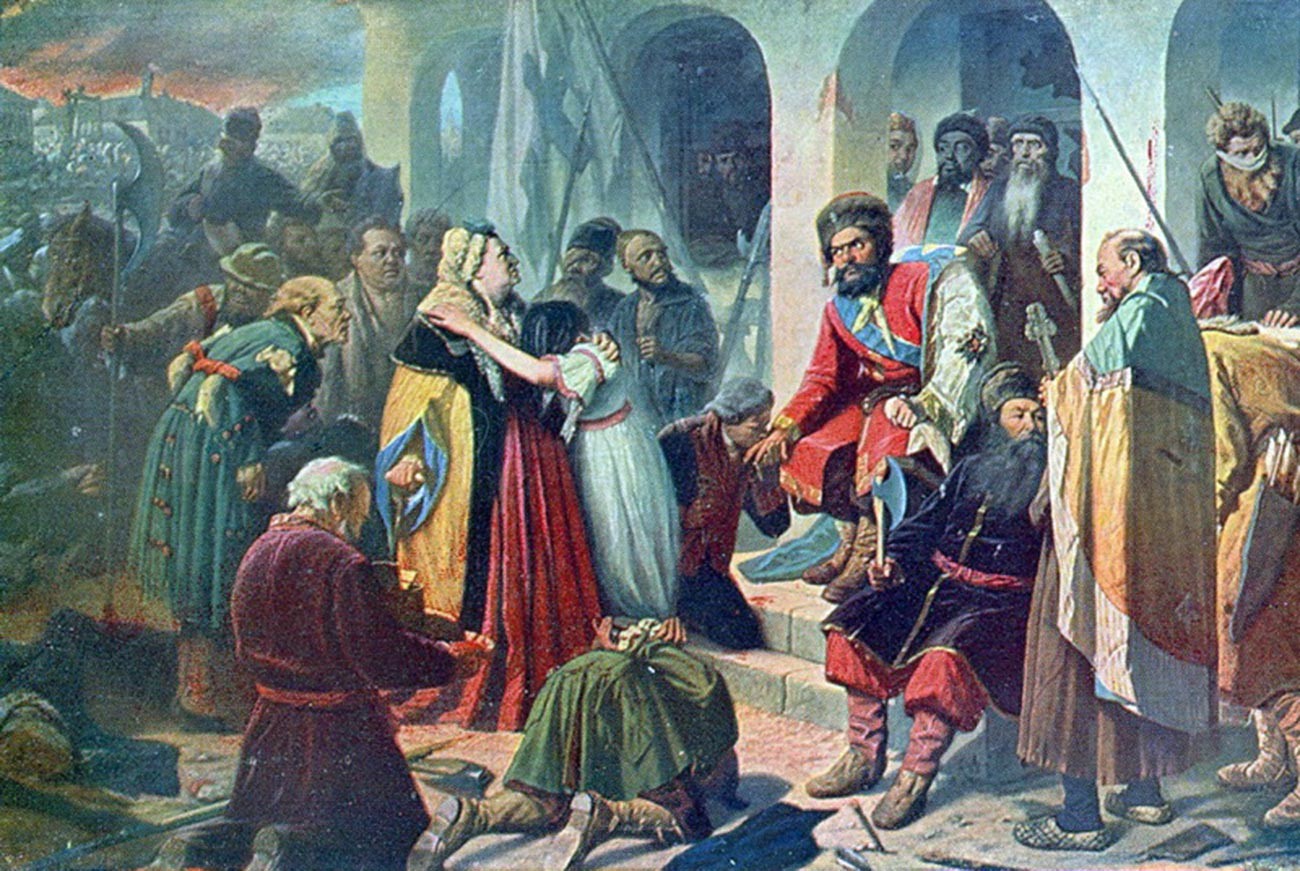 Yemelyan Pugachev was the leader of the largest peasant revolt in Russian history (1773-75). Pugachev, a Cossack, passed himself off as the deceased Emperor Peter III and gathered together a whole army. In the painting, Pugachev himself is administering justice. The artist painted several versions of the subject as he could not pin down how to portray Pugachev and his own attitude to him - whether he had been a villain, or a hero and a plucky Cossack. More on the Pugachev Rebellion can be found here. 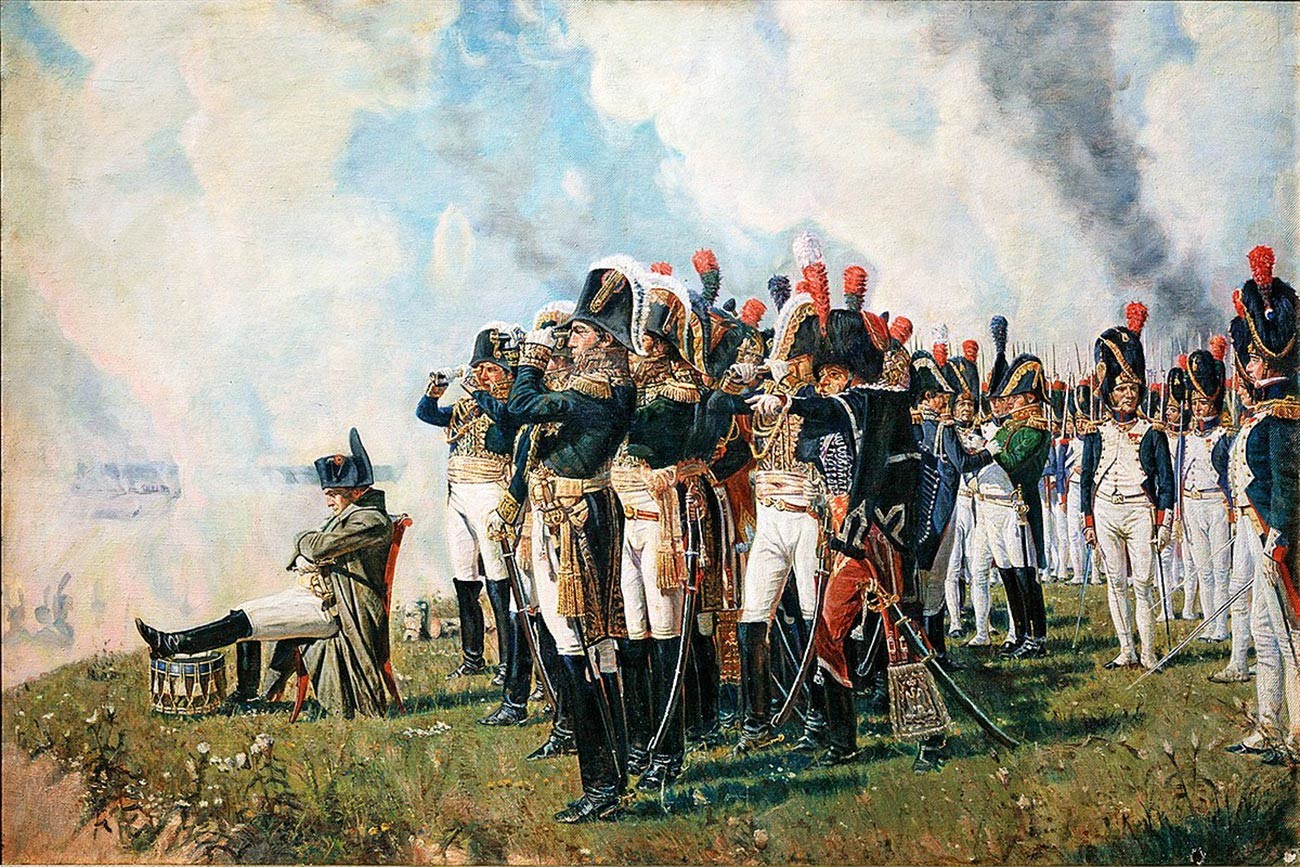 A large number of paintings (as well as other works of art, including Leo Tolstoy's War and Peace) were devoted to the war of 1812 against Napoleon's France. And the enigmatic figure of Napoleon has aroused general interest in many generations of Russians. In this painting, Bonaparte is clearly disappointed at the way the Battle of Borodino is proceeding. 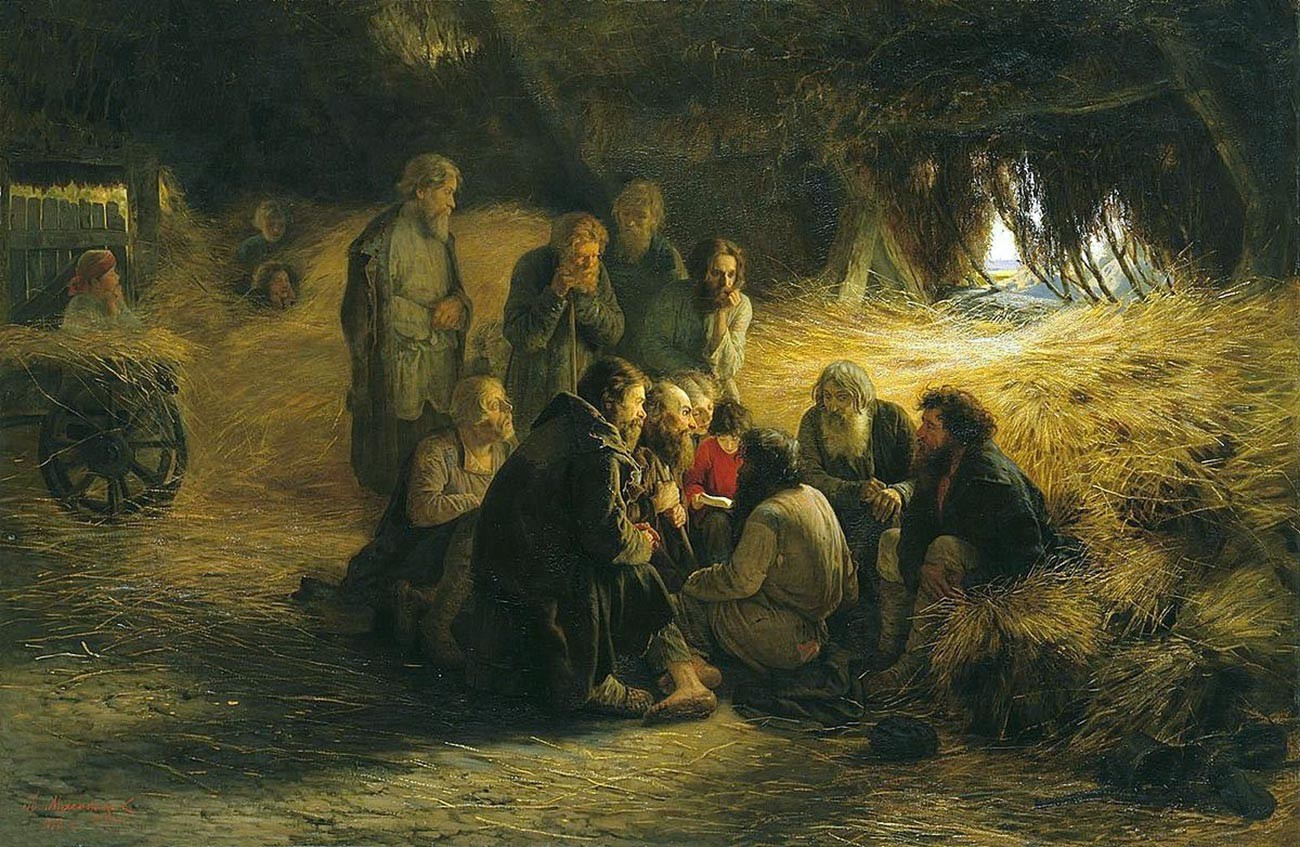 11. Valentin Serov. Coronation of the Emperor Nicholas II in The Uspensky Cathedral (1897) 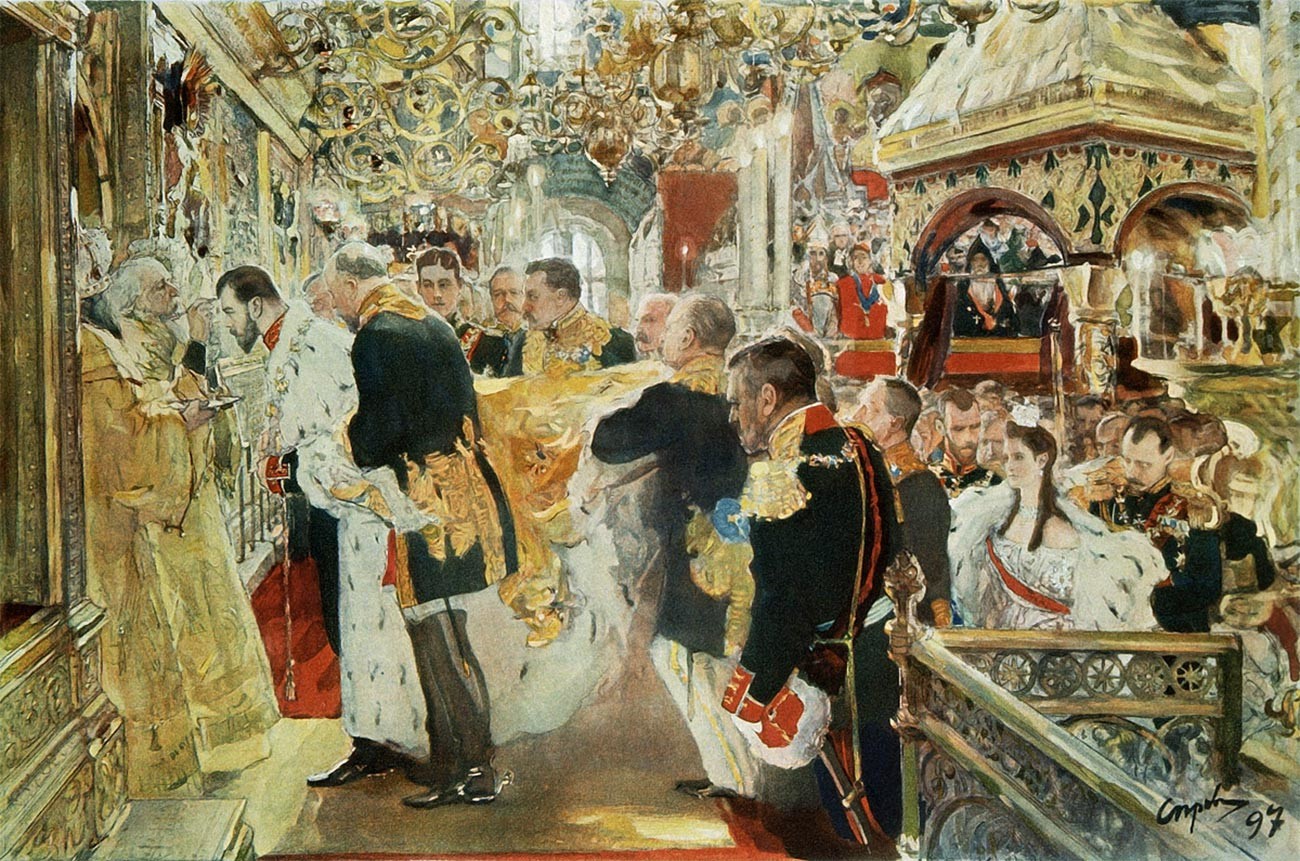 Serov painted many portraits of the Tsarist family and personages of the court. The reign of Nikolay II, the last Russian Tsar, ended in disaster and in his death along with that of his family. But it also began with disaster - after the coronation, more than a thousand people were killed in Moscow in a crush for free souvenirs. 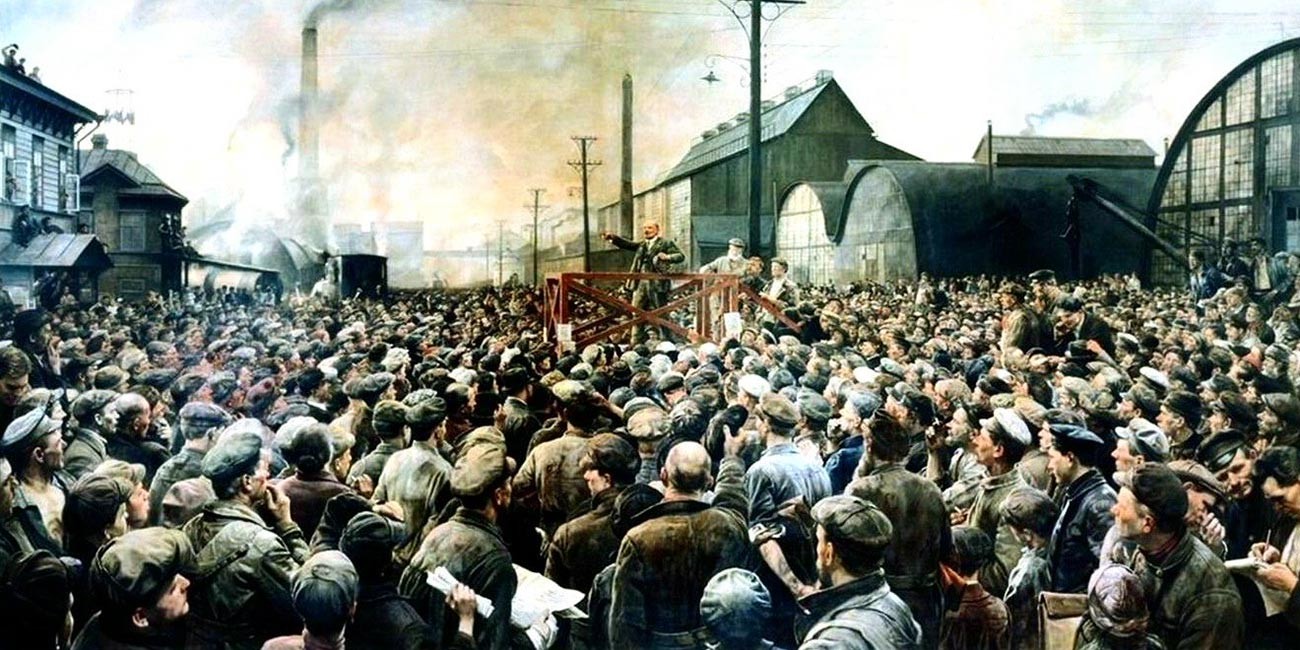 Petrograd workers' rallies and the ensuing 1917 Revolution were one of the pivotal moments in Russian history. Brodsky painted a lot of subjects from the life of Vladimir Lenin. In this painting, the Soviet artist emphasizes Lenin's rapport with the people. 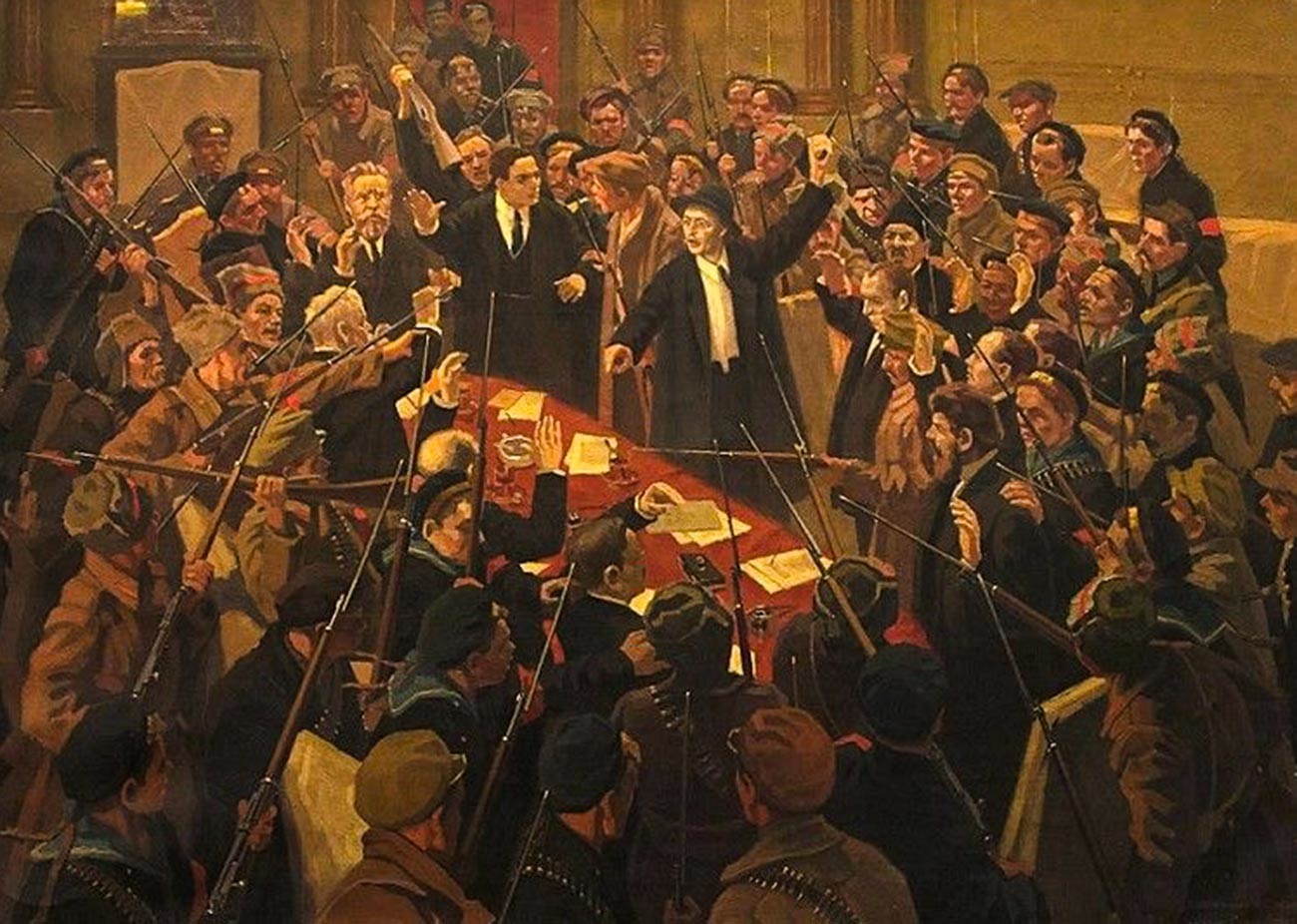 Thanks to Sergei Eisenstein's film October and widely reproduced Soviet propaganda images, the idea took root in the popular imagination that the 1917 Revolution had been a mass armed uprising with exchanges of gunfire and the storming of the Winter Palace where the Provisional Government was based. But in reality the Winter Palace was "taken" perfectly peacefully, even though the government really was toppled - to be followed by the founding of the Russian Soviet Republic and the ushering in of a completely new era. Read more: The true story behind the Bolshevik Revolution of 1917 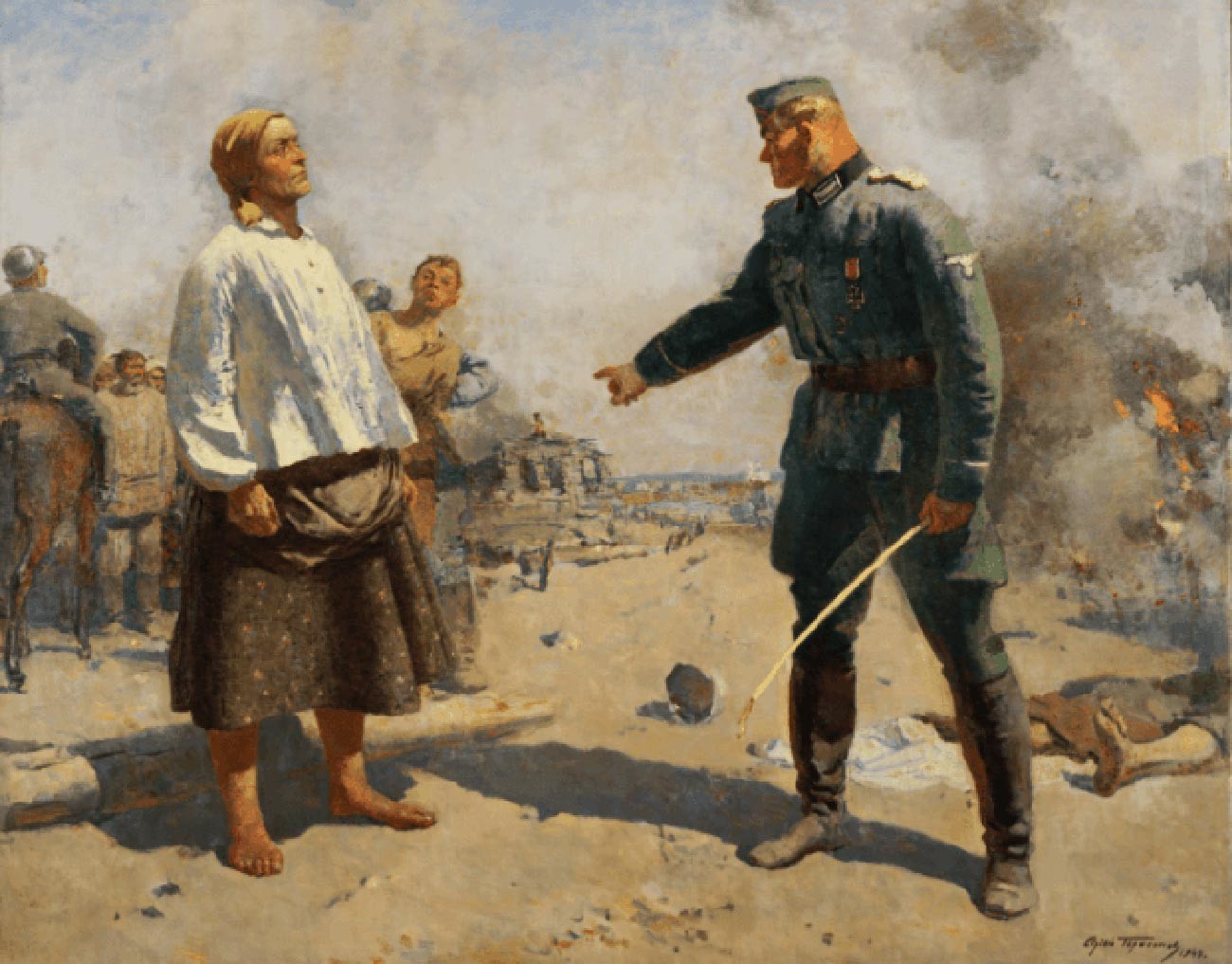 Many Soviet painters devoted canvases to World War II. Aside from large-scale battle scenes, artists also depicted the heroism of ordinary people. In this painting, Gerasimov conveyed a collective image of all mothers - the figure in the painting looks at the enemy with a stamp of suffering on her face, but with her head proudly held high.