The Khodynka tragedy: A coronation ruined by a stampede 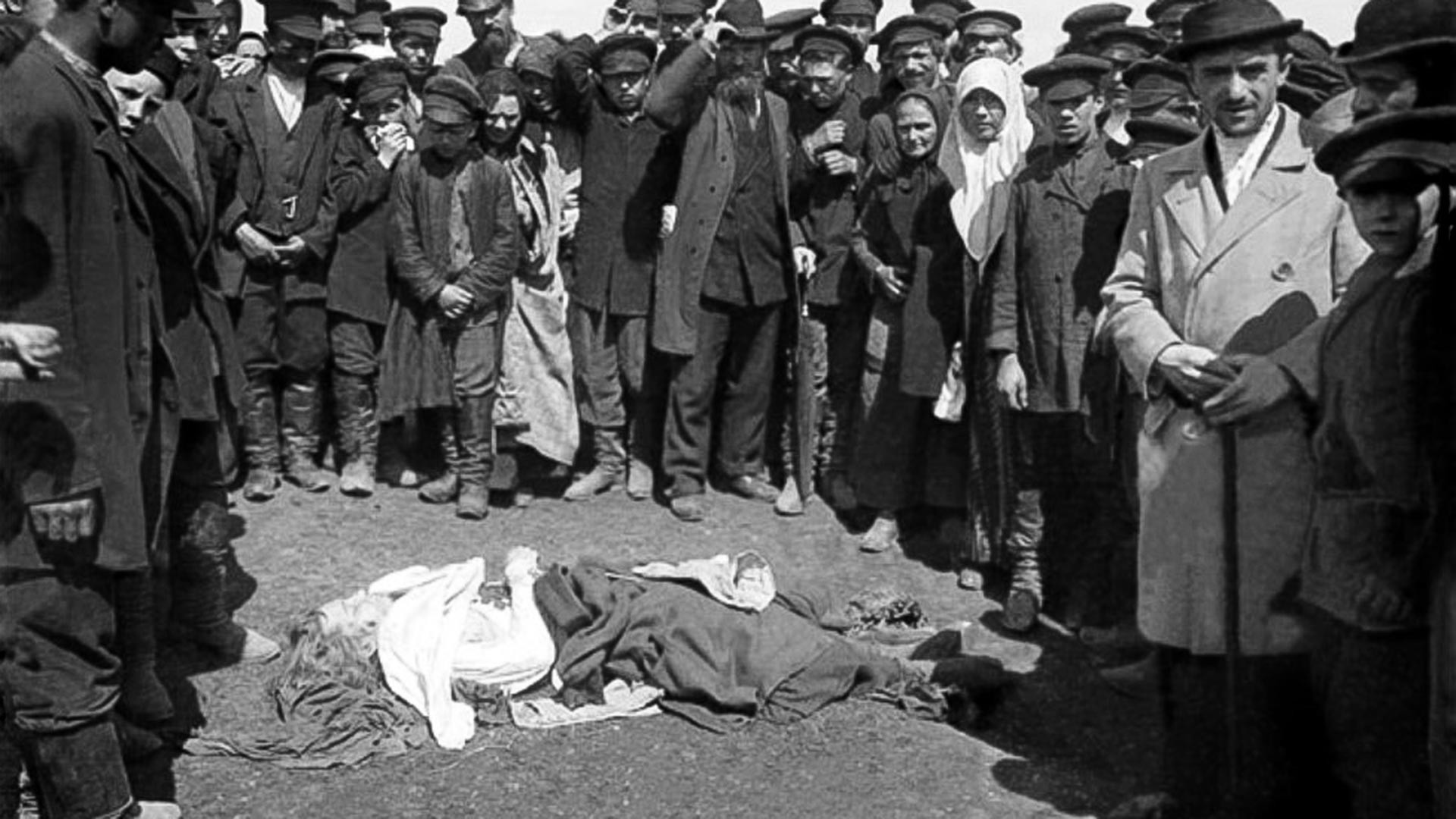 Victims of the Khodynka Tragedy in Moscow.

Public domain
A huge public celebration of the coronation of Nicholas II was planned at the Khodynskoe field in Moscow, but poor organizing caused a disaster.

Peter the Great moved the Russian capital from Moscow to Saint Petersburg in 1712, but the emperors had continued to be crowned in Moscow, in the Dormition Cathedral of the Moscow Kremlin. The last Russian tsar Nicholas II wasn`t an exception. His father, Alexander III, died in 1894 but Nicholas was crowned two years later, on 26 May 1896. His reign started with a tragedy that happened in three days at the Khodynskoe field (a large area where the Leningradskiy prospect begins nowadays). At that time it was a training base of the Moscow garrison and a traditional place of mass events. Moreover, the coronations of Alexander II and Alexander III were celebrated by the Moscow public there too, and no disaster happened. But the coronation of Nicholas II was preceded by a sequence of tragic mistakes. 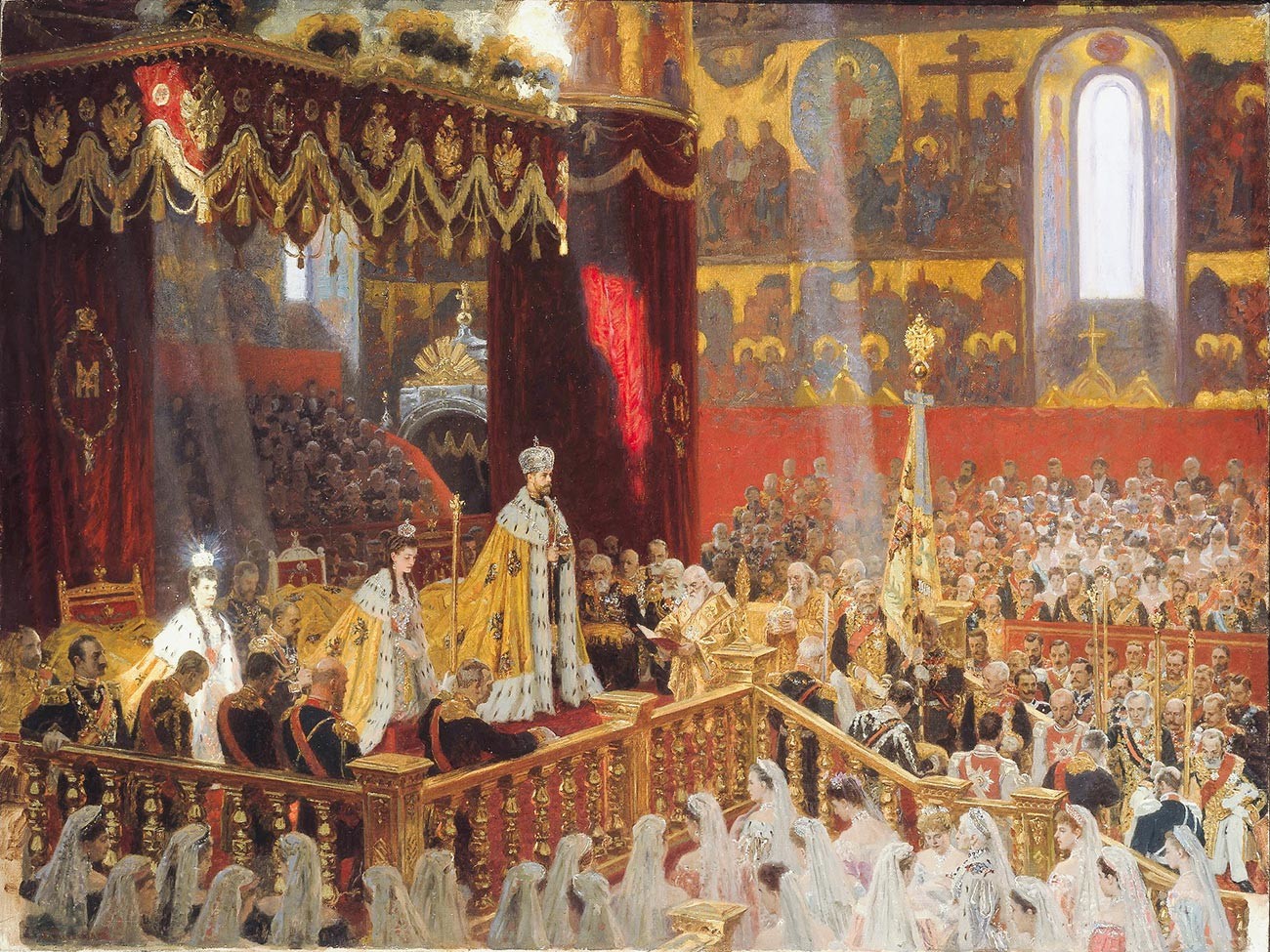 The coronation of Nicholas II in the Dormition Cathedral of the Moscow Kremlin.

The first one was made while the organizers were planning the number of guests at the generous celebration. The preparations were headed by Nicholas II’s uncle, Grand Duke Sergei Alexandrovich, General-Governor of Moscow. Everything was prepared generously, but it had turned out to be not enough: 10 000 buckets of mead, 30 000 buckets of beer, a lot of temporary theatres and show-booths. But the main thing for each guest was a special present. It contained a spice-bread with Nicholas’ monogram, a piece of sausage, some sweets and walnuts, a bread roll from the famous Moscow baker Filippov and a commemorative painted enamel mug which also had the new tsar’s monogram on it. All these goods were wrapped into a headscarf. Of course, everyone who came to Khodynka desired to get that present. The organizers didn’t take into account that people were going to come not only from Moscow, but from the surrounding villages too. The contemporaries estimated that the celebration had gathered up to 400 000 guests - practically one in two residents of that day’s Moscow had decided to visit this public party. Vladimir Dzhunkovskiy, an aide-de-camp of Sergei Alexandrovich remembered: “The whole field was thickly covered with people”. All of them had crowded at 1 km2 of the Khodynskoe field. This caused a disaster. 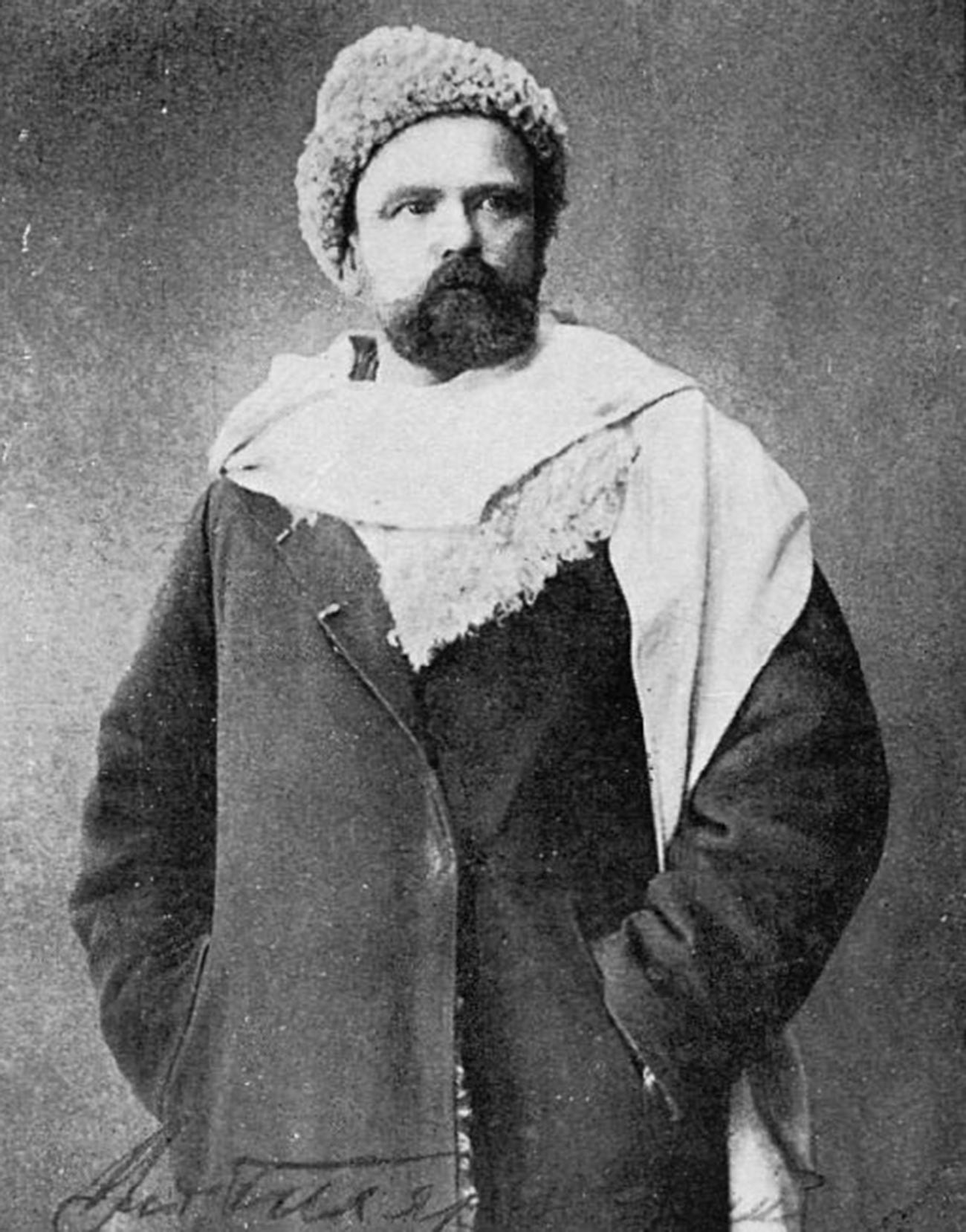 We have a full picture of Khodynka tragedy thanks to a famous Moscow reporter Vladimir Gilyarovskiy. He was fearless and had already given publicity to many fires and accidents, took part in Russo-Turkish War of 1877-1878. His short reportage “Katastropha na Khodynskom pole” (“Catastrophe at the Khodynskoe field”), appeared in “Russkie Vedomosti” the next day after the catastrophe. Many years later he wrote a book of memoirs called “Moskva Gazetnaya” (“Newspaper Moscow”). In the book he writes: “About 200 of Russian and foreign correspondents had arrived in Moscow by these days, but I was the only one who had spent the whole night among the crowd of many thousands who were choking and dying at the Khodynskoe field”. 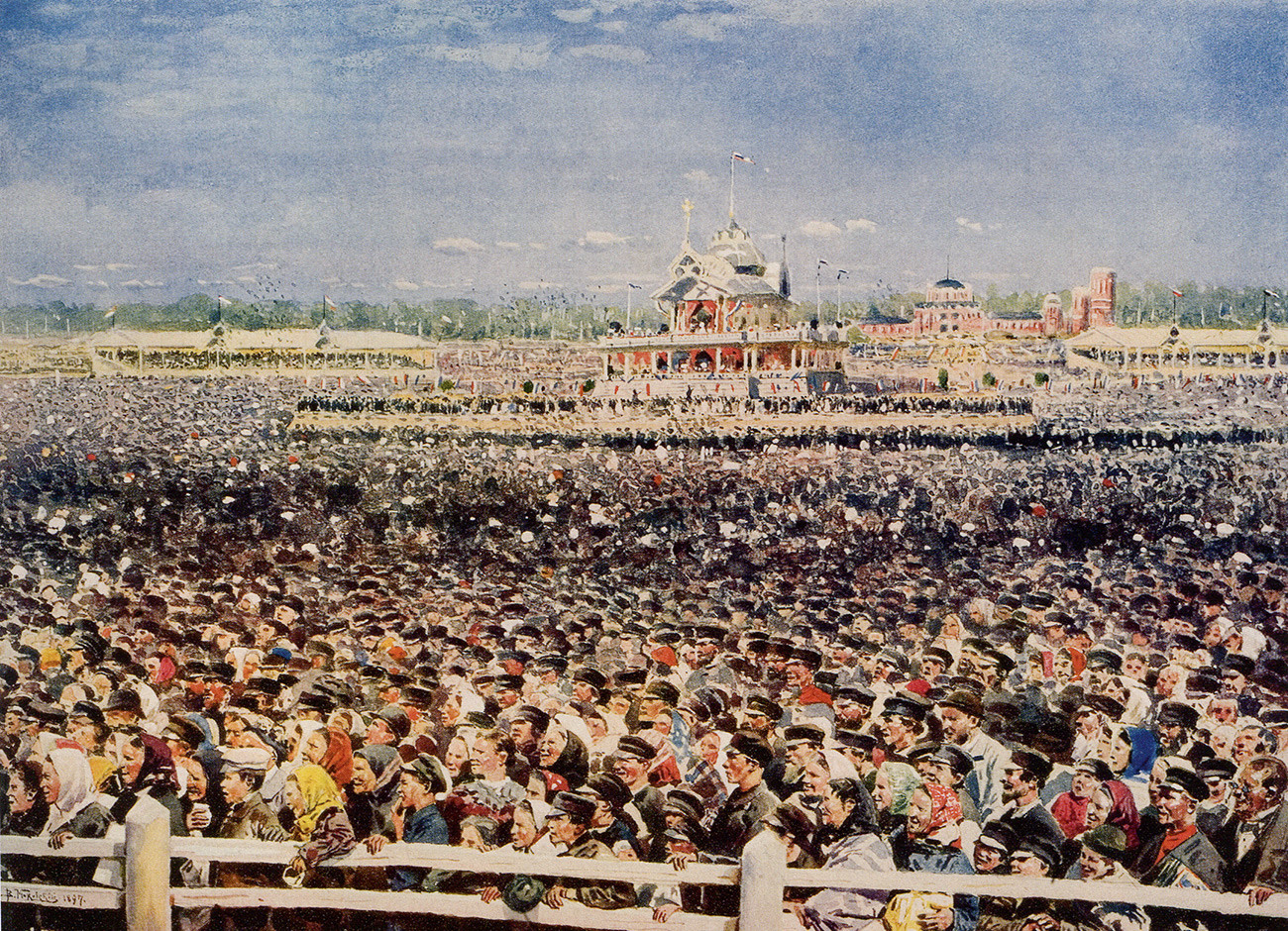 In his reportage for “Russkie Vedomosti” Gilyarovskiy gives a description of the field. The buffets with presents were built in a line from the edge of Moscow to Vagan’kovskoe cemetery, which at the time was outside the city. Here the reporter notices that the placing of the buffets was a mistake leading to an increase of the number of people who died in the following disaster. The thing is that the buffets with some passages between them stood as a parallel line to a deep ditch. Gilyarovskiy and Alexei Suvorin, the publisher of “Novoye Vremya” (“New Time”) newspaper, say it was about 64 meters long and with vertical slopes. Earlier it was used as a pit to get clay and sand for city needs. There wasn’t a big distance between the ditch and the buffets, just 20-30 steps. The surface of the field consisted of holes and was easy to stumble on. 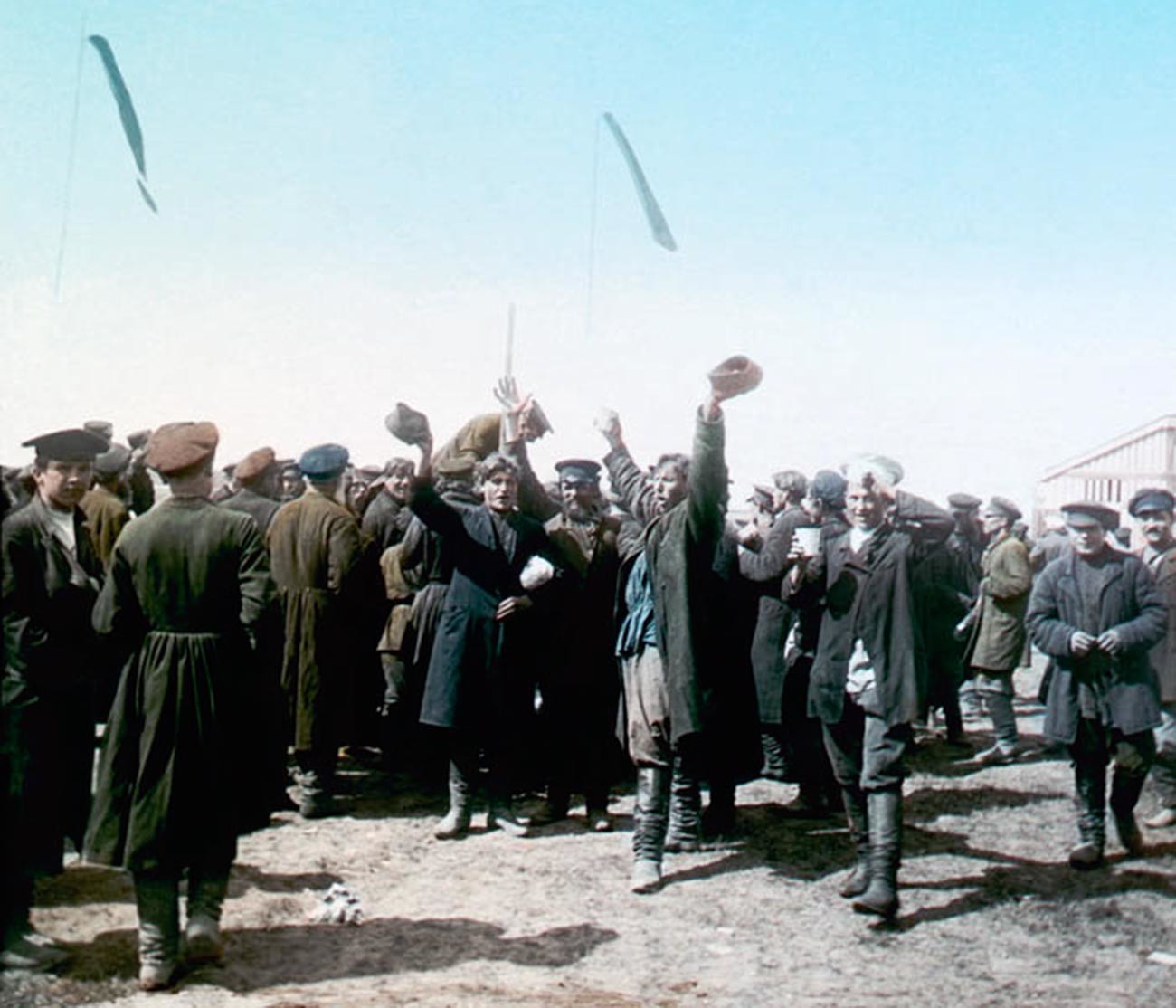 Gilyarovskiy had arrived to Khodynka in the evening on 29 May. A lot of people had already come. Everybody knew that the giveaway of presents was going to start at 10 a.m. the next day, but the guests had decided to arrive earlier to make sure they get their mug and delicacies, so they started gathering at the field at noon. The reporter at first was observing the place from a balcony of a horse race pavilion situated nearby, but then he went down to the field to mingle in the crowd. Moreover, there Gilyarovskiy met a man he knew and spent some time talking to him. In the meantime, people continued to arrive despite the night had come. They all stood very closely. Suddenly the reporter thought he had forgotten his tobacco box in the pavilion and tried to return. It was very hard to get through the tight crowd. Gilyarovskiy says in his reportage: “You couldn’t stir your arm, you couldn’t move”. 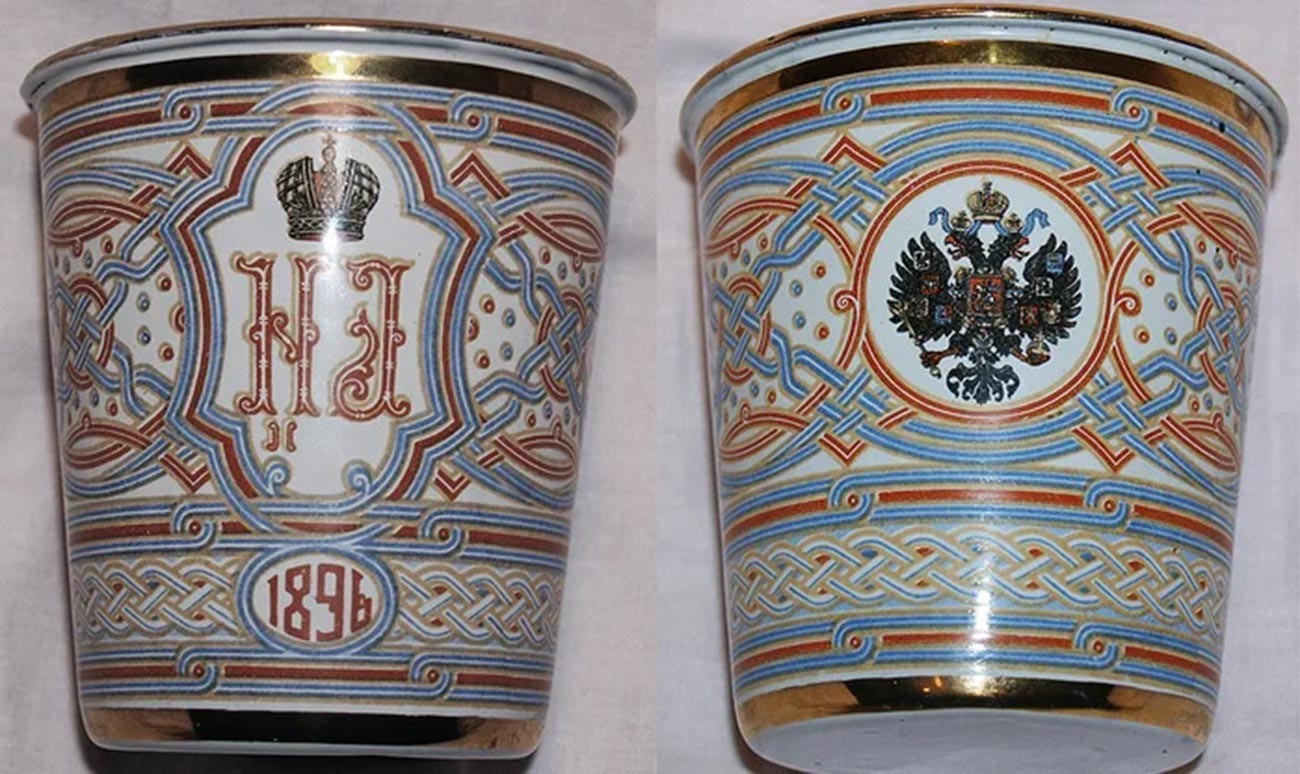 Here was the reporter’s turn to make a mistake. The people were heading to the buffets pressing each other. He kept trying to go against the crowd to the pavilion and finally got stuck among all the other unlucky ones. A stampede was starting, and the children were pushed out of the crowd to the top. Some of them had a chance to crawl to a safe place stepping on the heads. The pressed people were starting to faint. They continued standing as there was nowhere to fall. Stinky mist had formed a cloud over the field. 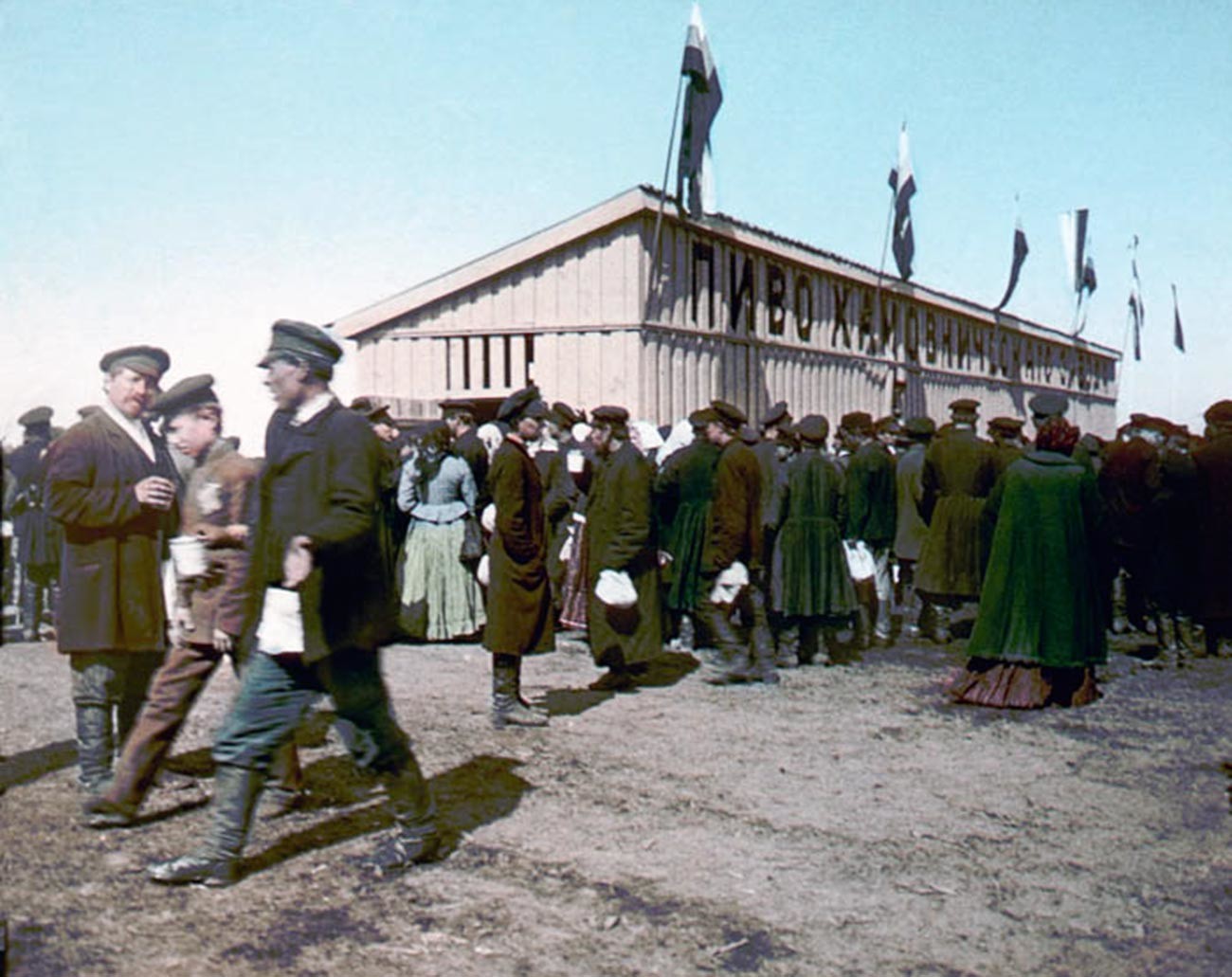 The worst thing happened after the members of artels (organized groups of people working at this public party) in the buffets had complied with the first rows of people who kept demanding to be given presents. Everyone in the crowd realized it and the stampede got stronger, the pressing strengthened, some people were falling and the others stepped on them. There was a rumor in the crowd that there was a house, a cow or a horse depicted on each of headscarfs, and these pictures meant more Nicholas’ presents. The workers at the buffets threw the gifts to the crowd and worsened the situation even more. “It had lasted not more than ten excruciating minutes”, Gilyarovskiy writes in his reportage. Here he omits the torture he had gone through himself. His book of memoirs tells about it: “I was absolutely losing consciousness and getting exhausted of thirst”. The reporter kept trying to get out when a dozen of cavalry Cossacks had started to break up the crowd. He managed to come to a safe place. “I fell down near the fence of a running route. I pulled out the grass and ate it, it quenched my thirst and I went off”. Gilyarovskiy was very tall and incredibly strong. It helped him protect himself and survive, but he still suffered terribly. The torture of weaker people was unimaginable. 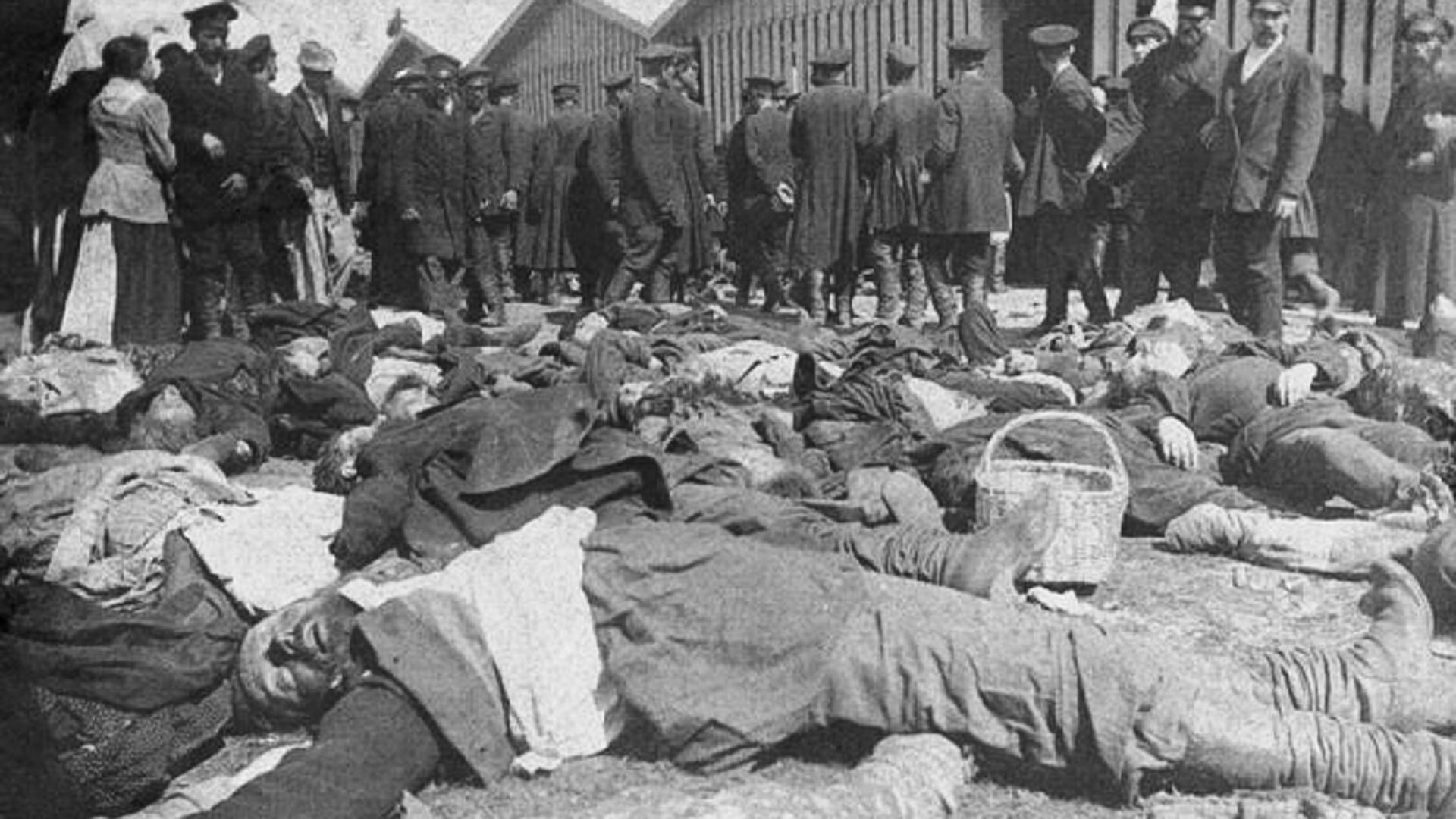 Victims of the Khodynka Tragedy.

When Sergei Alexanrovich was told about the tragedy, he gave an immediate order to remove the consequences of it. Nicholas II with his wife was going to arrive at 2 p.m., so by this time everything had to be back in order. The dead people were found everywhere at Khodynka, especially in the ditch. Also there was a well, where 27 fallen people choked, and only one man survived. Moreover, many dead people were found quite far from the field, because the shock didn’t let them feel their wounds, so they had managed to go away. Apparently, the Moscow authorities took into a consideration just a part of all who suffered. As it was officially estimated, the Khodynka catastrophe took 1389 lives and more than 900 people were injured. The dead ones were taken mostly to Vagankovskoe cemetery. 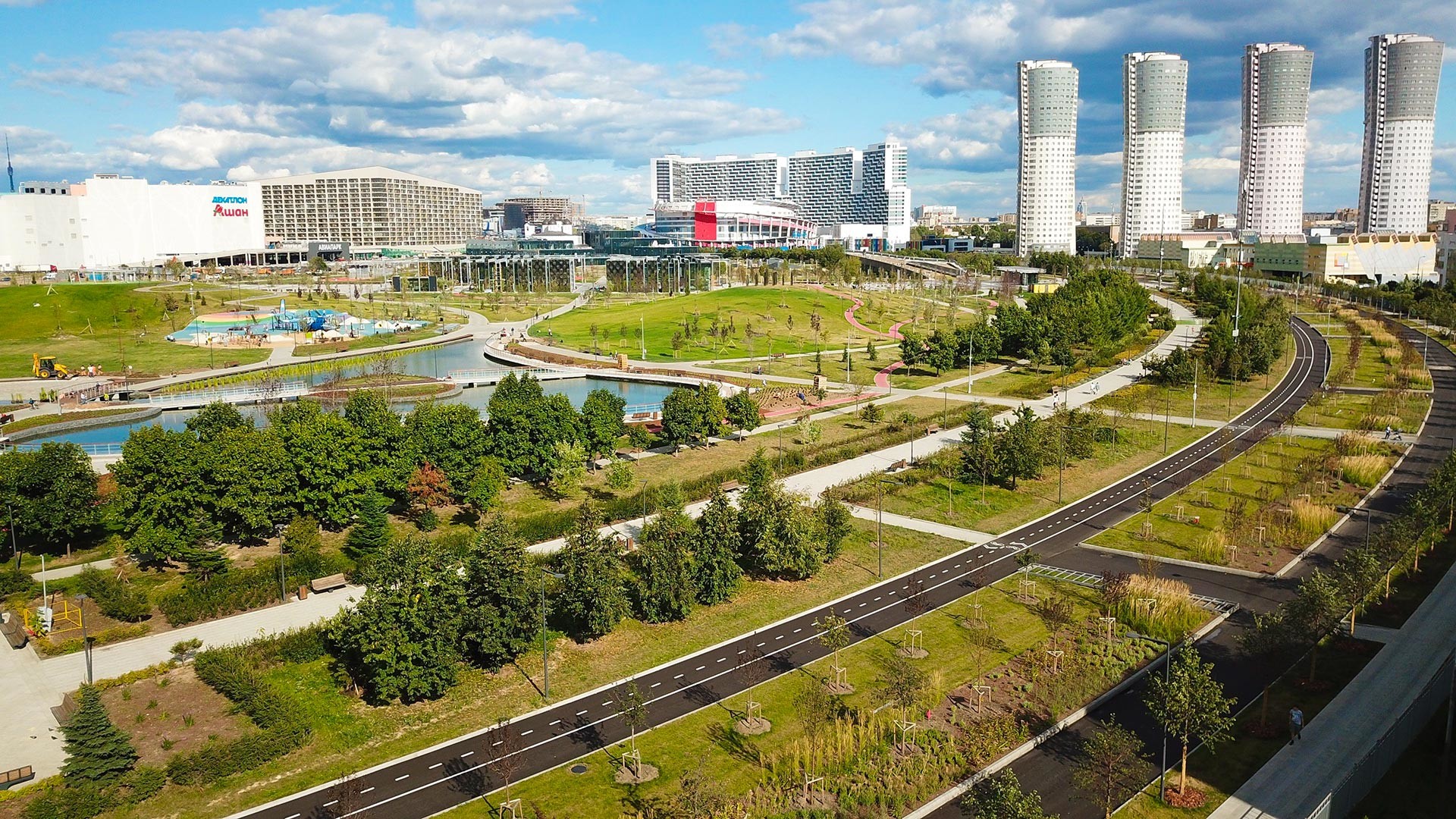 While the new emperor and empress were going to Khodynka, they saw carts with hurt or dead people. Nicholas II had already known everything, and the tragedy made him terribly upset. Later he wrote in his diary: “These news had left me a disgustful impression”, calling the stampede “a great sin”. Anyway, he had decided to continue the celebrations. At Khodynka the hymn was playing, and people bade welcome the tsar and his wife. In the evening Nicholas went to a ball of the French ambassador Montebello. Sergei Witte, the Finance minister, remembered in his memoirs: “However, His Majesty left that ball soon… evidently, the catastrophe gave him a strong impression”. Witte was also sure that if the decision depended only on Nicholas’ will, the tsar would have cancelled all the festive events. The victims’ families were given money as a compensation, the emperor and the empress visited the injured in the hospitals the next day. Nevertheless, Nicholas II’s authority was undermined. The Moscow society had considered Nicholas’ refusal to stop the parties as disrespect for the victims. In his memoirs Gilyarovskiy remembers the phrase of an old typesetter in the newspaper printing-house: “This means trouble! This reign will bring no good!” There were a lot of predictions like that. The Khodynka tragedy had also ruined the reputation of Sergei Alexandrovich, who got nicknamed as “Duke of Khodynka”. Of course, the tragedy could be avoided, if the organization of this mass celebration was managed better.