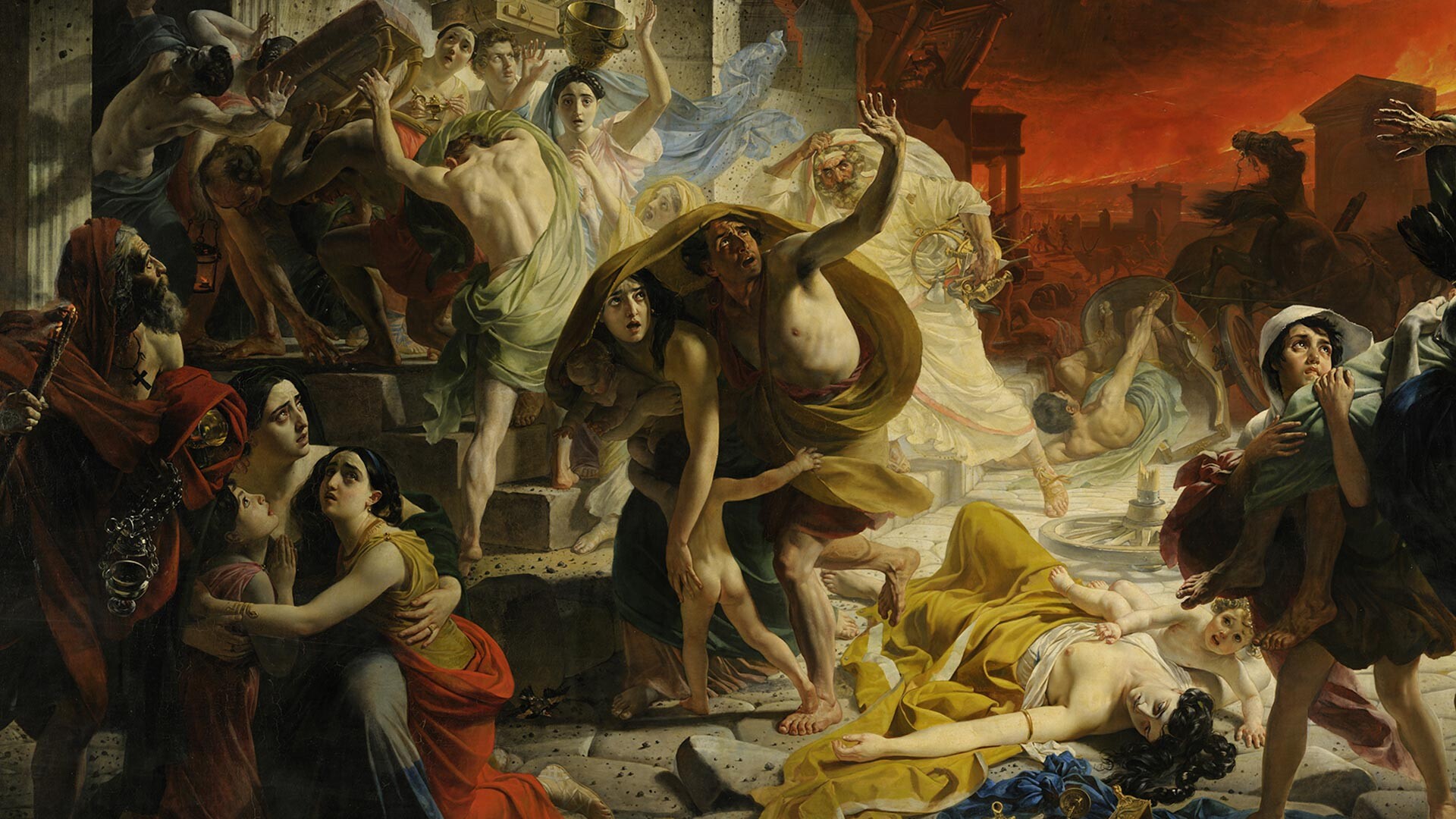 Karl Bryullov/The State Russian Museum
The brutal persecution of the first Christians in the Roman Empire, the atrocities of the Turks in the Balkans and the tragedy of the Indian uprising against British rule to name but a few. Such themes could not leave Russian artists indifferent.

Vasily Vereshchagin. Crucifixion by the Romans, 1887. 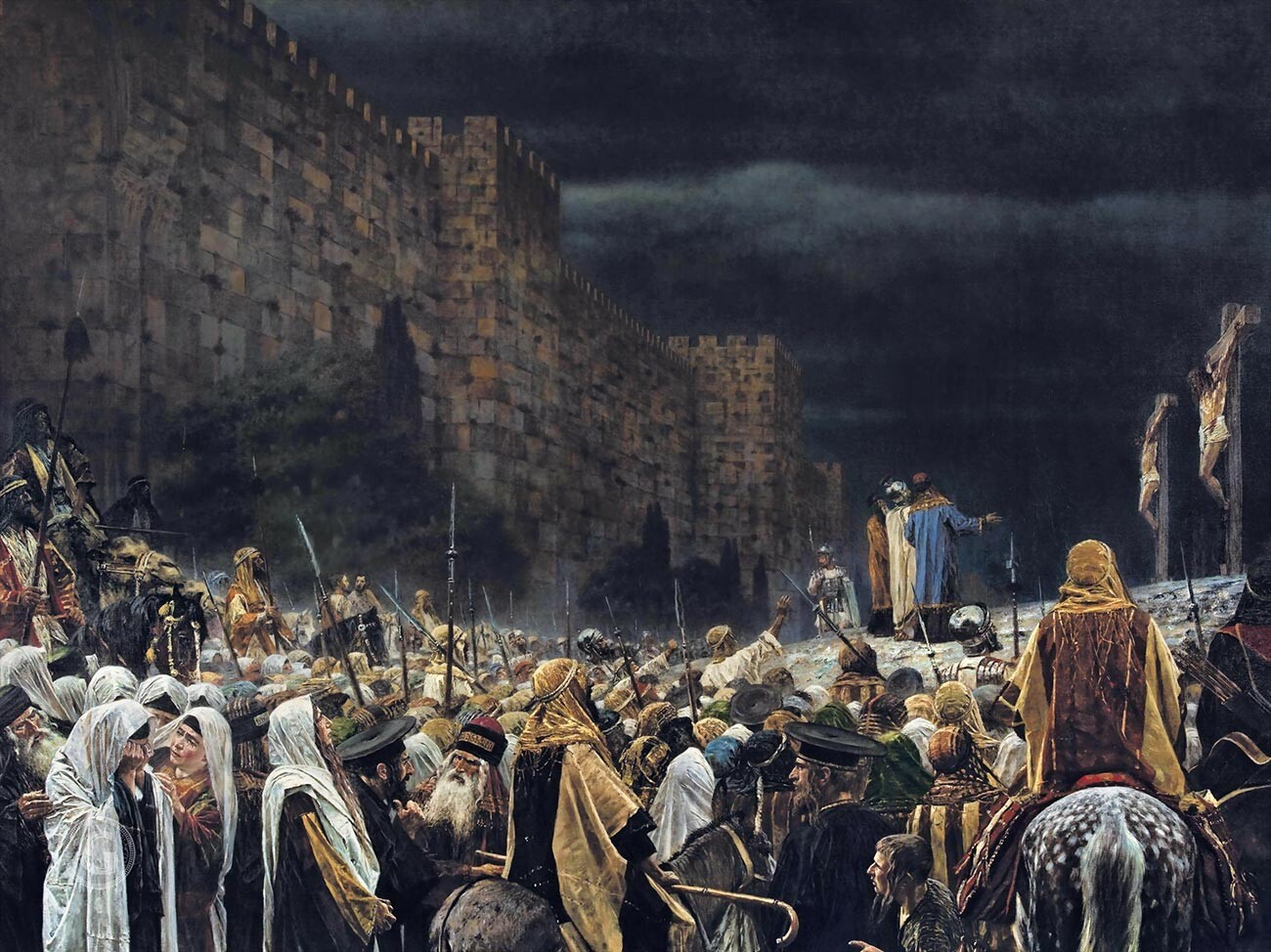 Widespread in the Roman Empire, crucifixion on the cross was considered one of the most cruel, painful and shameful executions of the ancient world. Some 6,000 or so slaves captured by the Romans after the defeat of the Spartacus rebellion in 71 B.C. were crucified on the road from Capua to Rome. According to Christian doctrine, Jesus Christ and his apostles Andrew and Peter were crucified, which made the cross a symbol of the Christian religion. 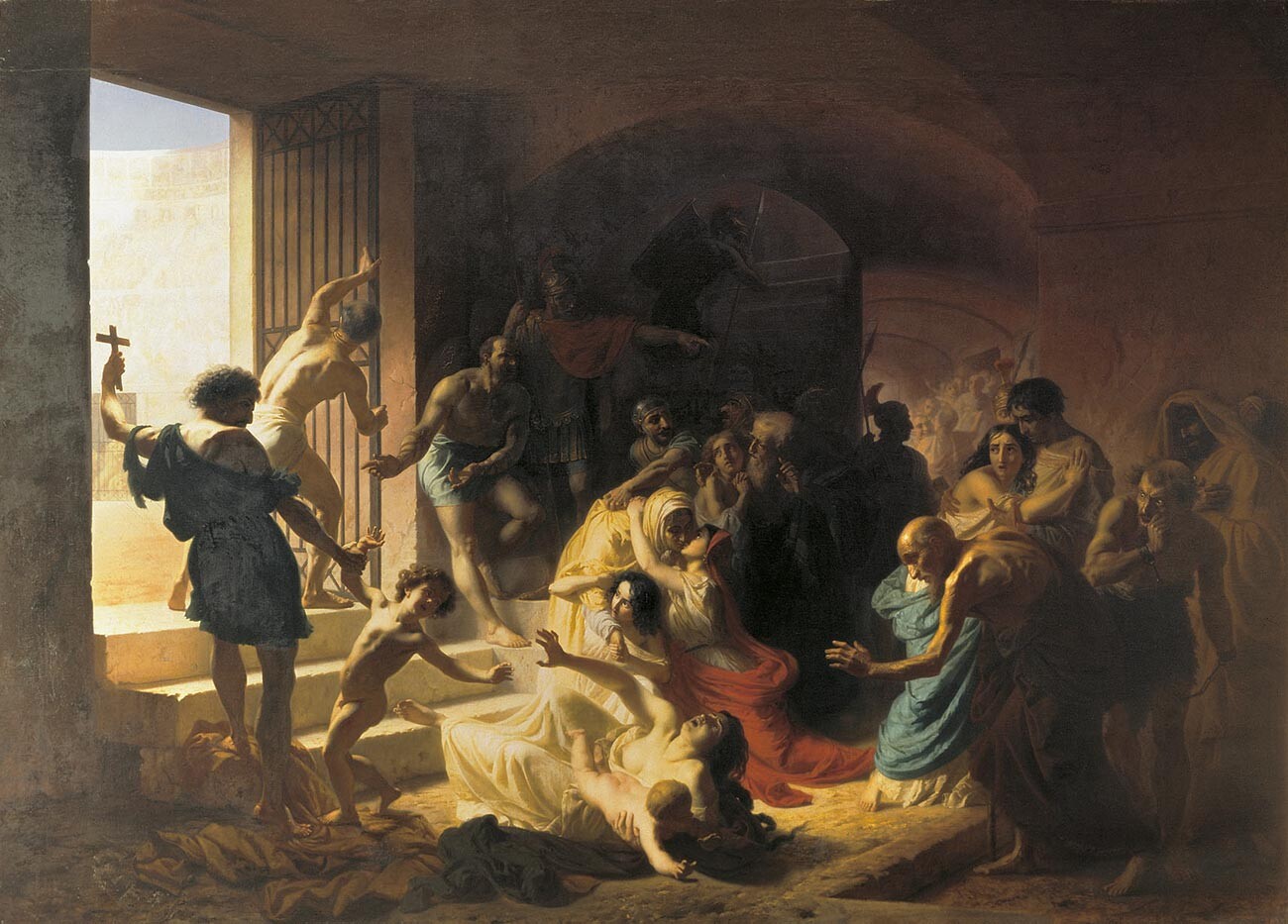 Christians in the first centuries of the new era were persecuted on a large scale by the authorities until the year 313, when the Edict of Milan adopted by the emperors Constantine and Licinius legalized their position. The most common punishment for them, in addition to crucifixion on the cross, was the so-called “condemnation to beasts” (Damnatio ad bestias), when defenseless people were taken to the circus arena and given to hungry lions. 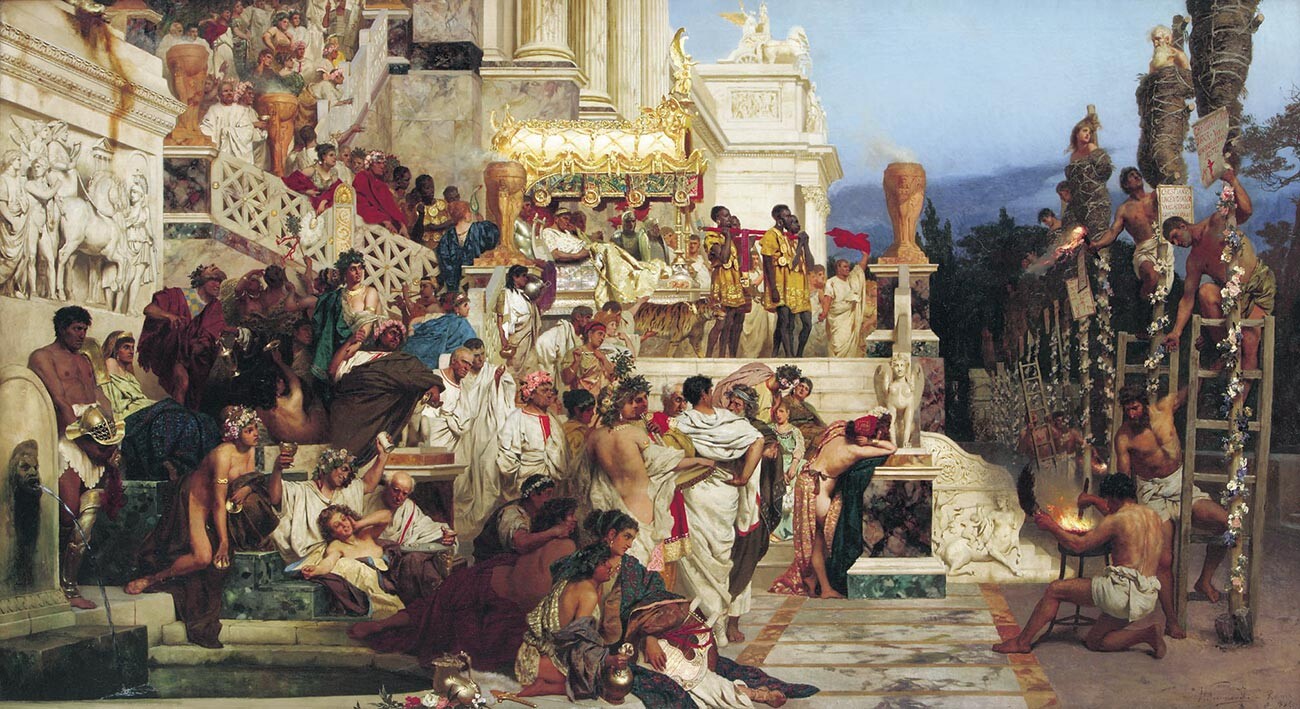 The theme of the persecution of early Christians in the Roman Empire was continued by Russian-Polish artist Henryk Siemiradzki. This painting depicts the massacre of the Roman Christian community by the Emperor Nero in the year 64. At that time, a devastating fire destroyed a large part of the ‘Eternal City’ and the ruler shifted all the blame for the incident onto the Christians. 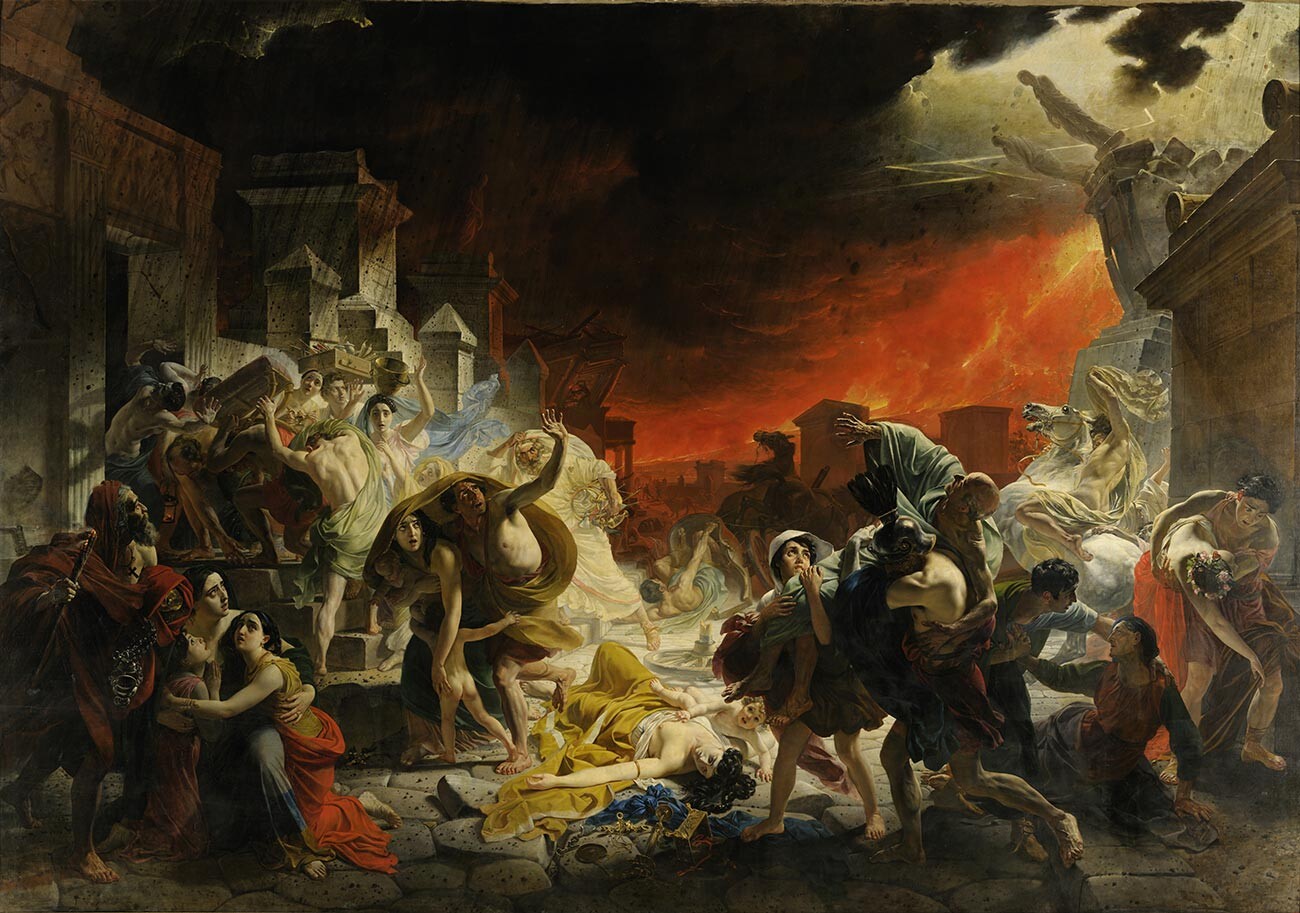 In the year 79, as a result of a powerful eruption of the volcano Vesuvius, several nearby cities were buried under a multi-meter-thick mass of ash. Karl Bryullov depicted the potential last moments of life of the infamous Pompeii. Although most of the inhabitants managed to leave the city before the catastrophe, thousands of people remained in its streets and in their homes forever. 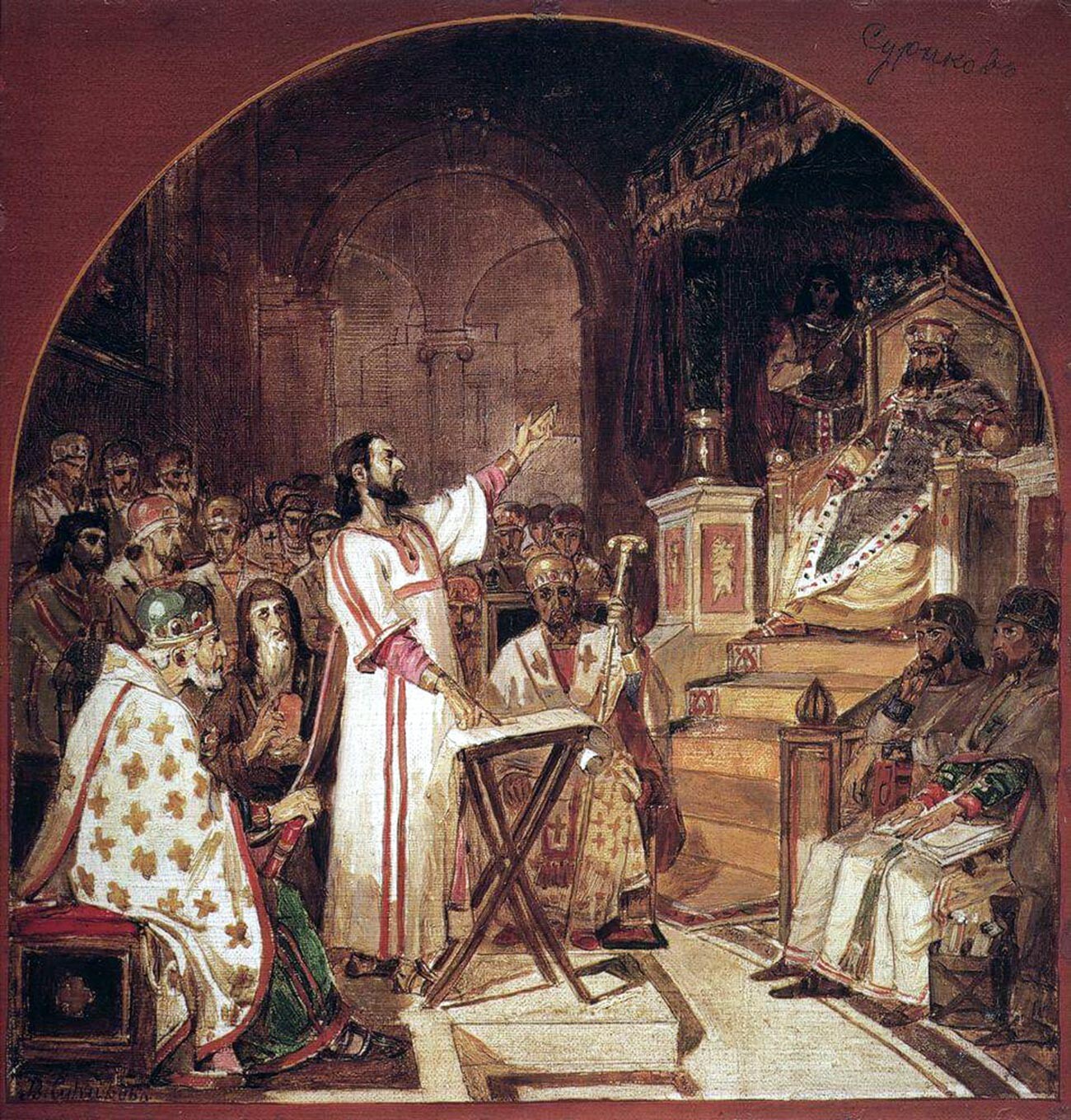 The First Council of Nicaea, convened by Emperor Constantine in 325, was of great importance for the history of Christianity. On it, the Creed was drawn up and approved, in which God the Son was proclaimed uncreated, without beginning and consubstantial with the Father. In addition, the final separation from Judaism was consolidated, Sunday instead of Saturday was recognized as a day off, Arianism and other heresies were condemned. 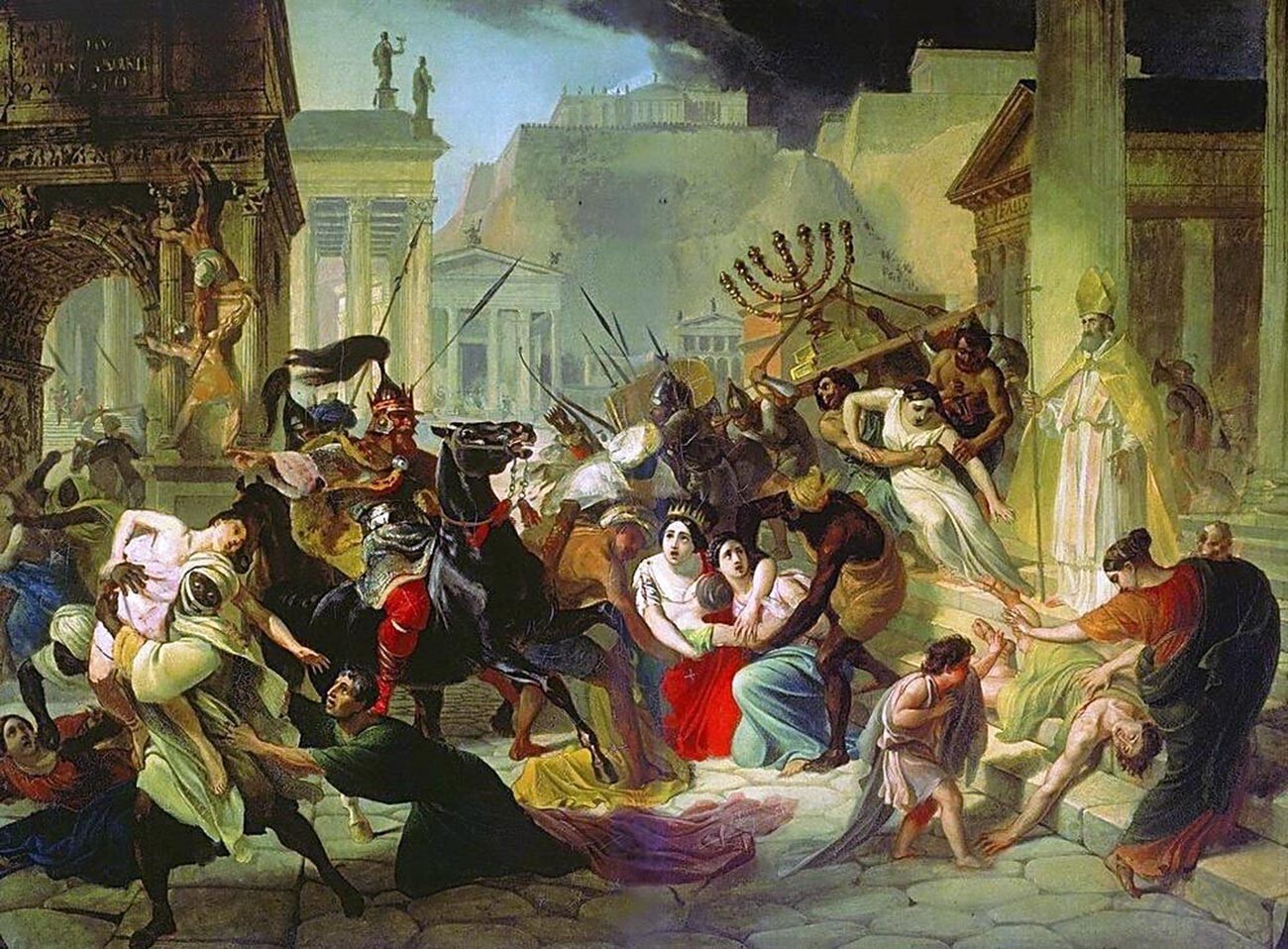 In the year 455, at the end of the Western Roman Empire, the ‘Eternal City’ was taken without a fight by the East Germanic Vandal tribe of King Genseric. After two weeks of plunder, the ships were filled with gold, silver, jewels, statues, furniture, as well as hundreds of captives to be sold into slavery. It is with the name of the Vandals that, since the Great French Revolution, the senseless destruction of cultural treasures has become associated (although, in fact, they were exporting, rather than destroying them). Nevertheless, the word ‘vandalism’ was then firmly embedded in many languages of the world. 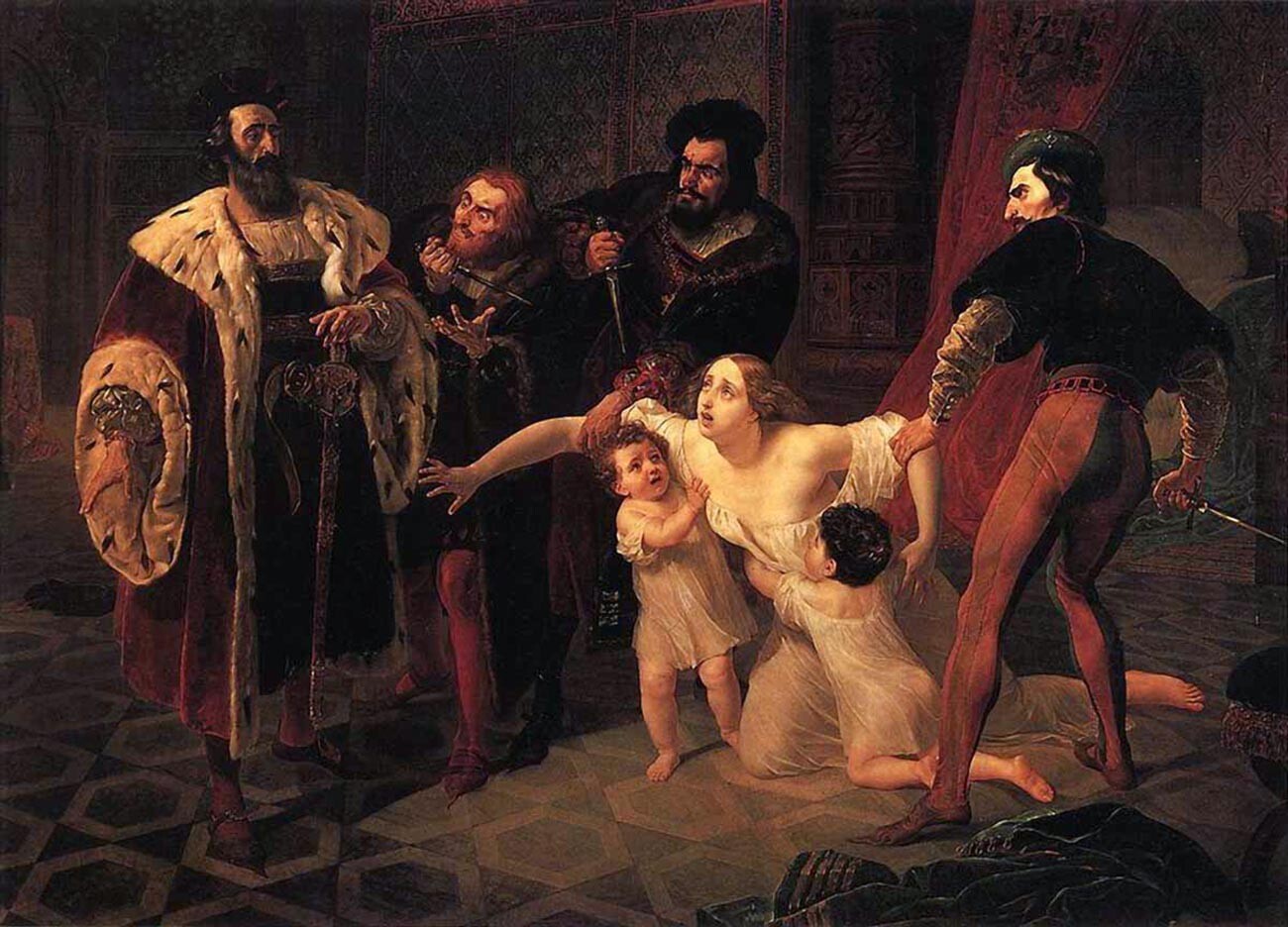 Inês de Castro was the favorite of the son of Portuguese King Alfonso IV, the infante (prince) Don Pedro. She had a relationship with him both during the lifetime of his lawful wife, Constança Manuel, and after her death. In spite of his father’s demands, the widowed Pedro flatly refused to remarry and Alfonso IV, concerned for the fate of the dynasty, decided to remove the obstacle. According to legend, which Bryullov illustrated, Ines was saved from certain death by pleas of her illegitimate children from the infante. Nevertheless, she was beheaded on January 7, 1355. This provoked Pedro’s violent fury and led to the outbreak of a Portuguese civil war that lasted several years. 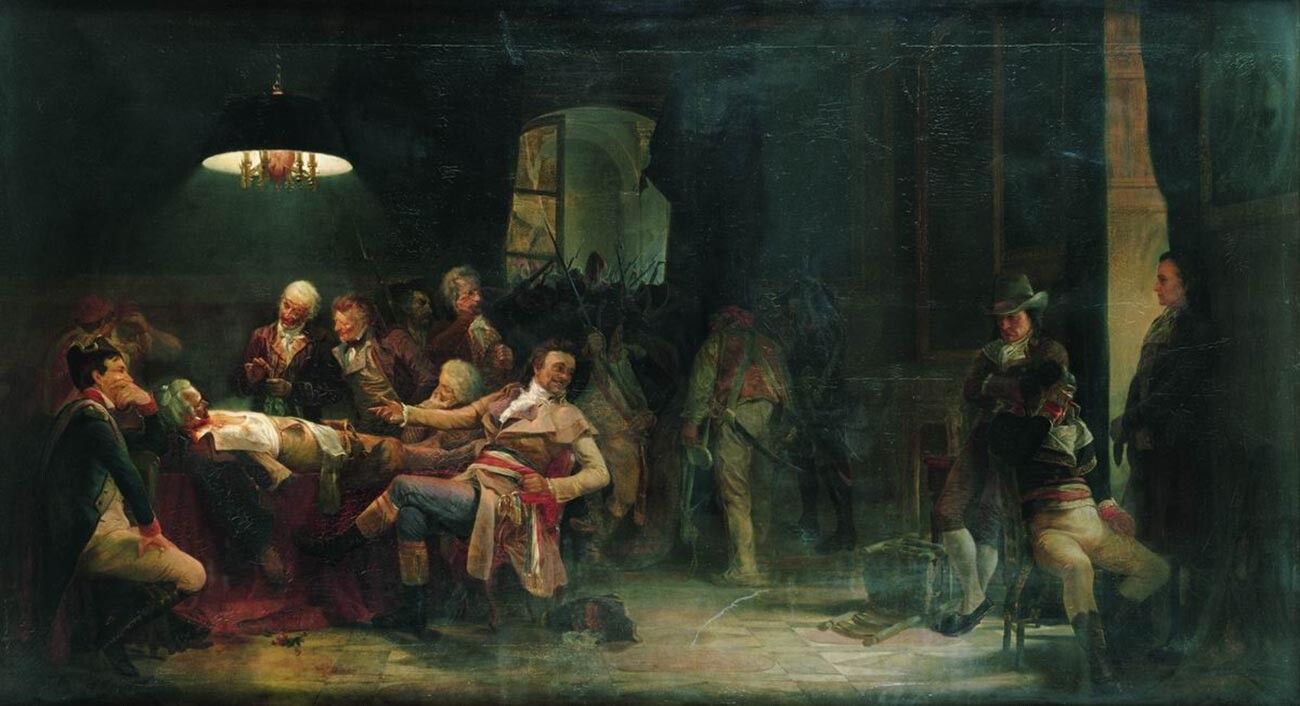 On July 27, 1794 (the 9th of Thermidor II according to the French revolutionary calendar), as a result of a split in the government of the French First Republic, one of the most powerful men in the state, the initiator of the ‘Great Terror’, Maximilien Robespierre, was arrested. In his painting, Valery Jacobi depicted the wounded Robespierre (his jaw was shattered by a pistol shot) being mocked by the triumphant conspirators, while his comrades-in-arms huddled near the window are looking at this in gloom. The next day, all those arrested were guillotined on the Place de la Révolution in Paris. 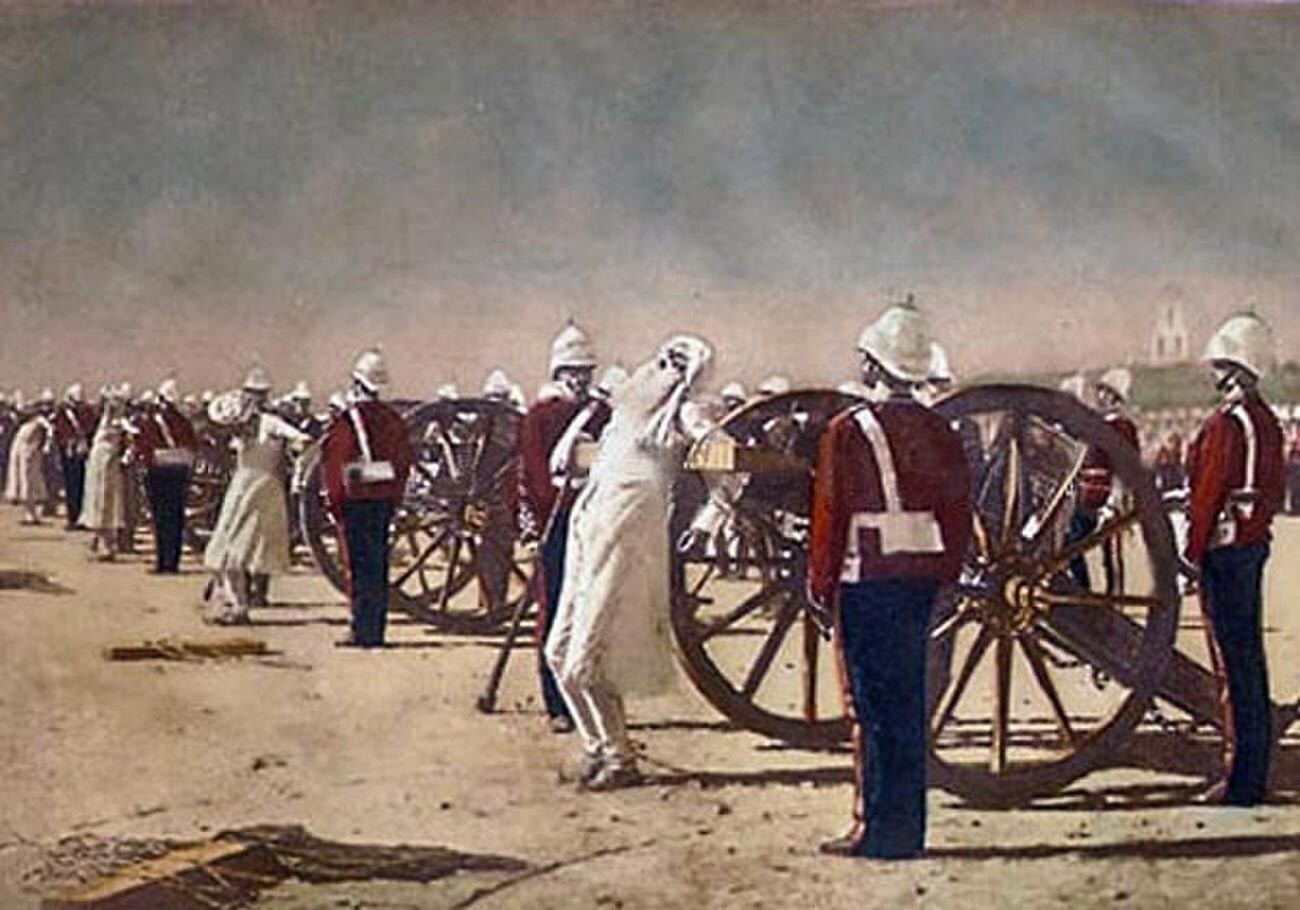 In 1857, India was gripped by a large-scale rebellion against the colonial policy of Great Britain. It began with the Sipai, mercenary soldiers recruited from the local population. They also became the main strike force of the rebels. After two years of confrontation, British troops achieved a convincing victory by subjecting the rebels to the harsh execution known as ‘Devil’s Wind’. Convicts were tied to cannon barrels and then shot with cannonballs or blanks of gunpowder, tearing the victims’ bodies to pieces. 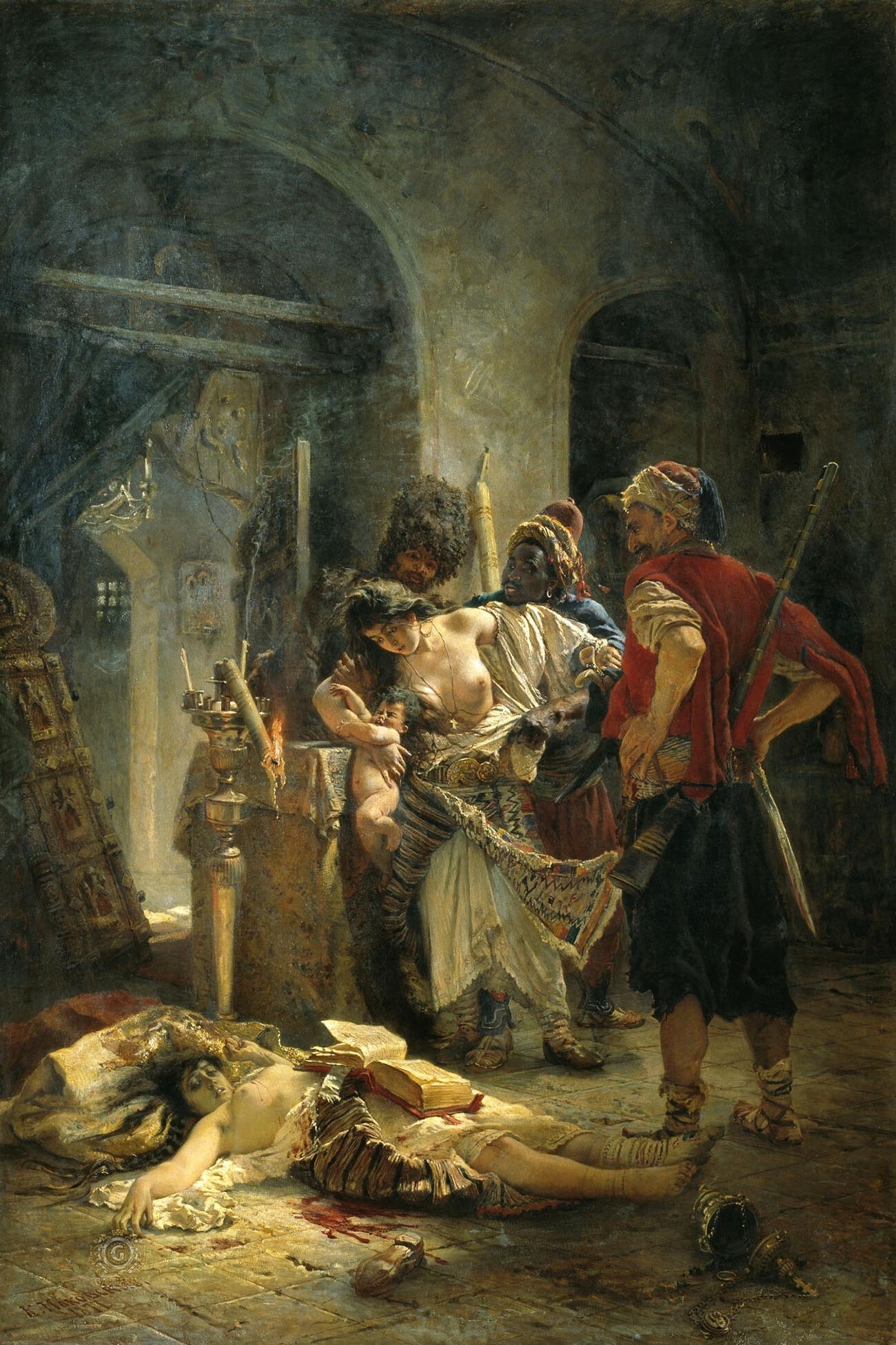 This painting by Konstantin Makovsky is dedicated to the tragic events of the April Uprising of 1876 in Bulgaria, which was brutally suppressed by the Turkish army and irregular troops - the Bashibuzuk, mainly recruited in Albania, who are also depicted on the canvas. The artist’s work aroused strong feelings in Russian society and even brought tears to the eyes of Emperor Alexander II. Turkish atrocities in the Balkans was one of the main reasons Russia entered the war against the Ottoman Empire in 1877, one of the results of which was the restoration of Bulgarian statehood.