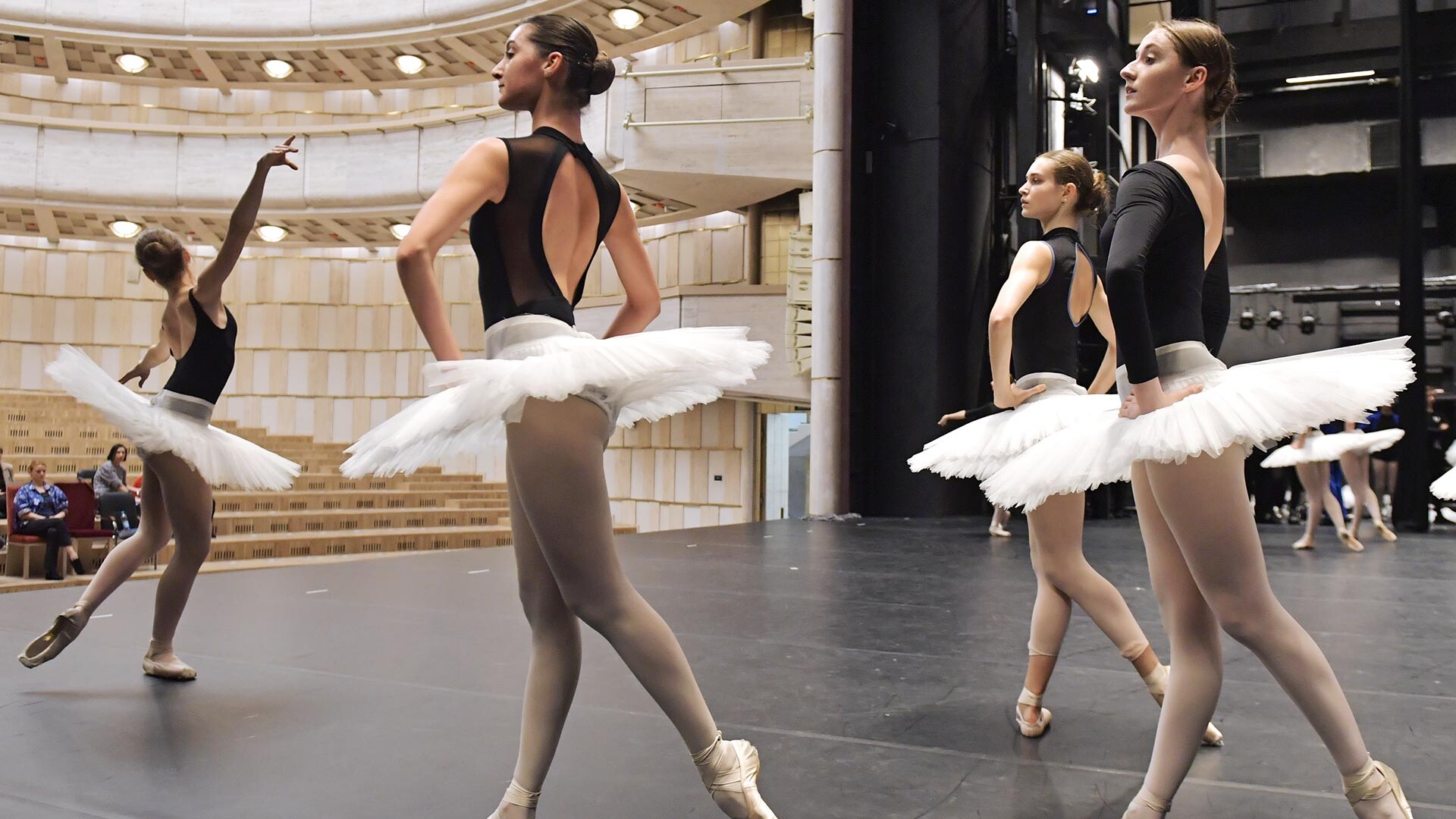 This contemporary dance company is known across the globe, and its director is acknowledged as a genius. What’s so special about Eifman and his creative brilliance? 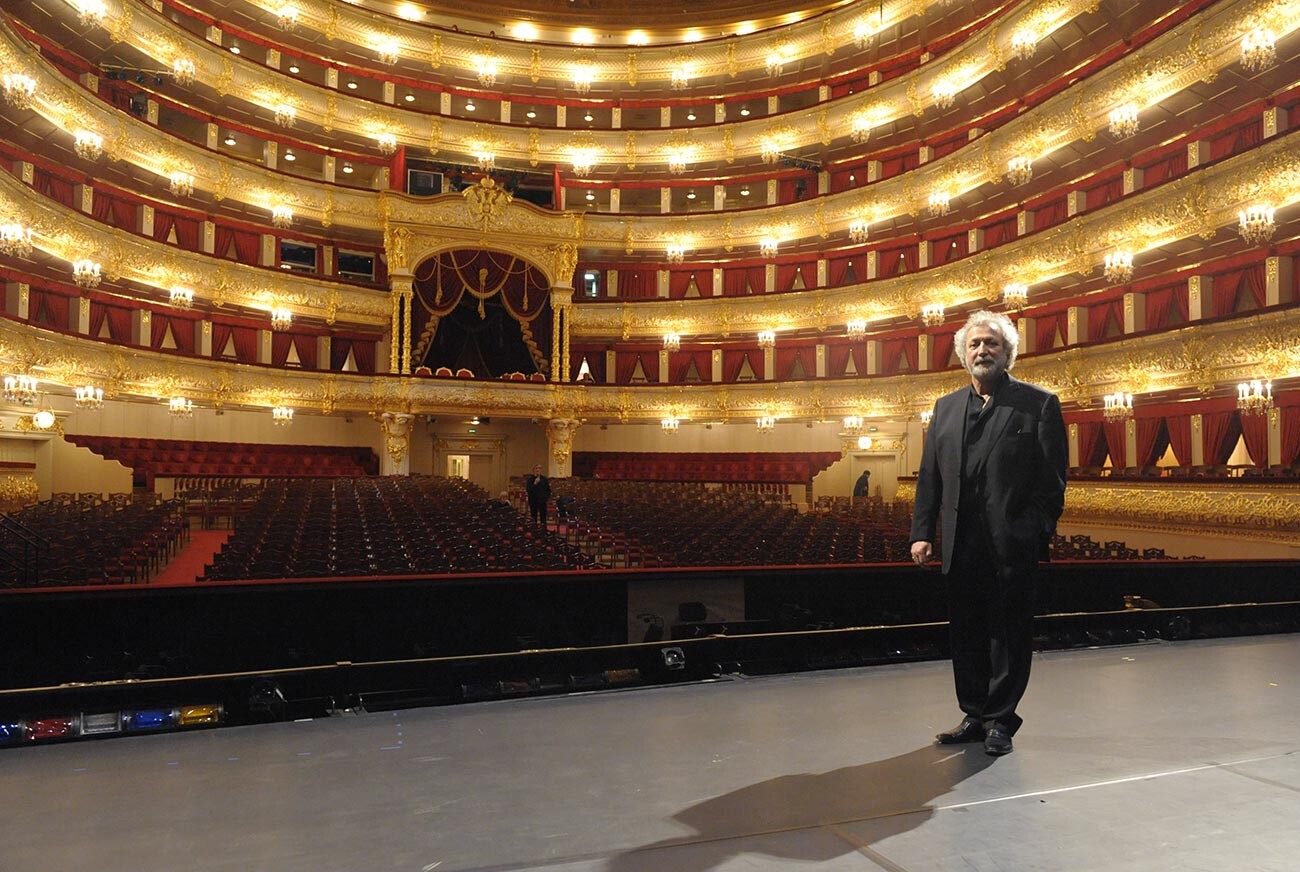 He began his dancing career at the youth Palace of Pioneers in the city of Kishinev in Soviet Moldova. Today, Boris Eifman is now the creator and artistic director of his own ballet theater, as well as president of the Boris Eifman Dance Academy.

From provincial theater to Leningrad 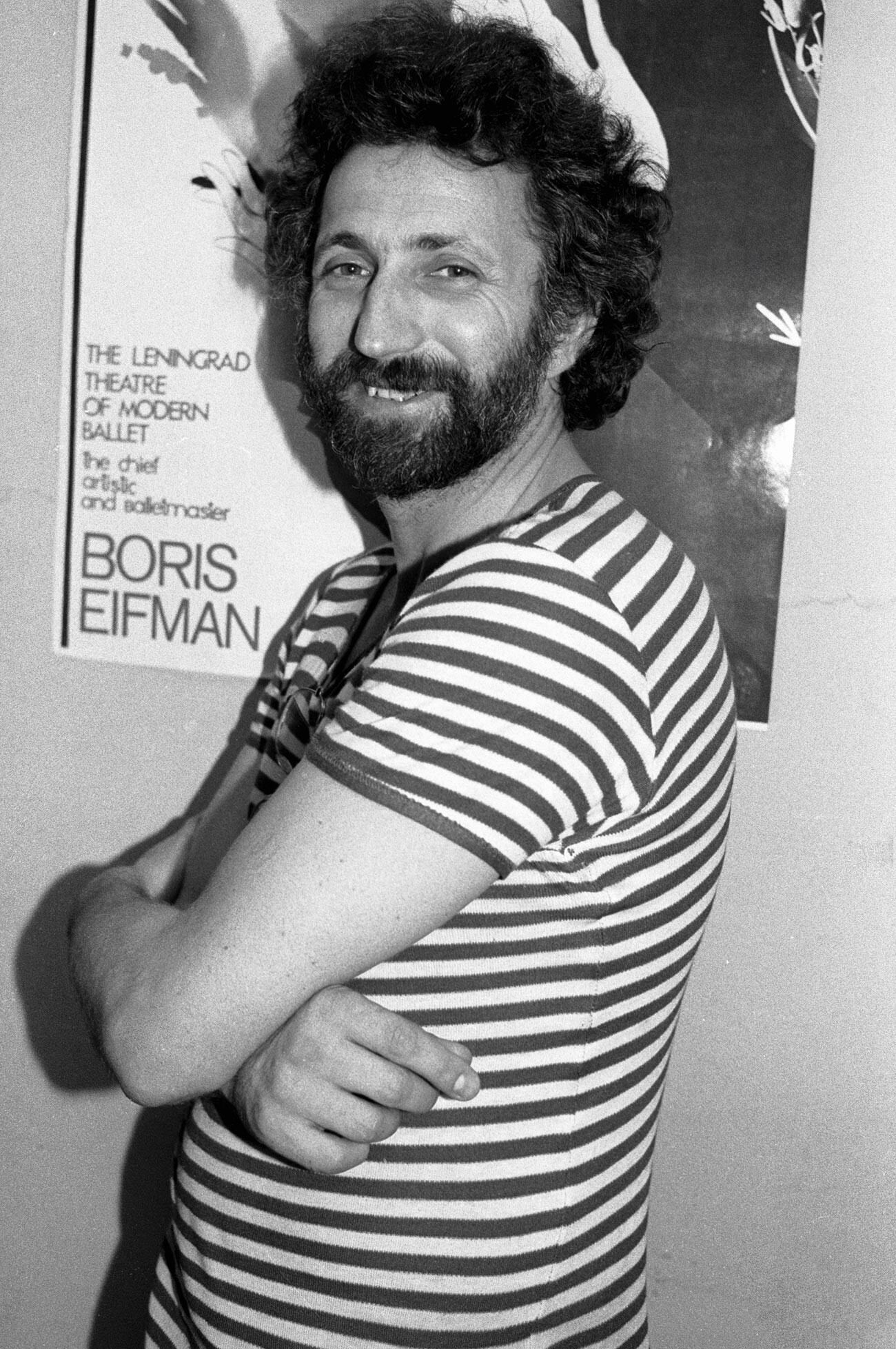 Eifman was born in 1946 in the small town of Rubtsovsk in the Altai Region, to where his family had been evacuated during World War II. A few years later, they moved to the Moldavian SSR, where the five-year-old Eifman began his artistic journey – first at dance class in the Palace of Pioneers in Kishinev (a.k.a. Chișinău), and then at the choreography department of the Kishinev Musical College. 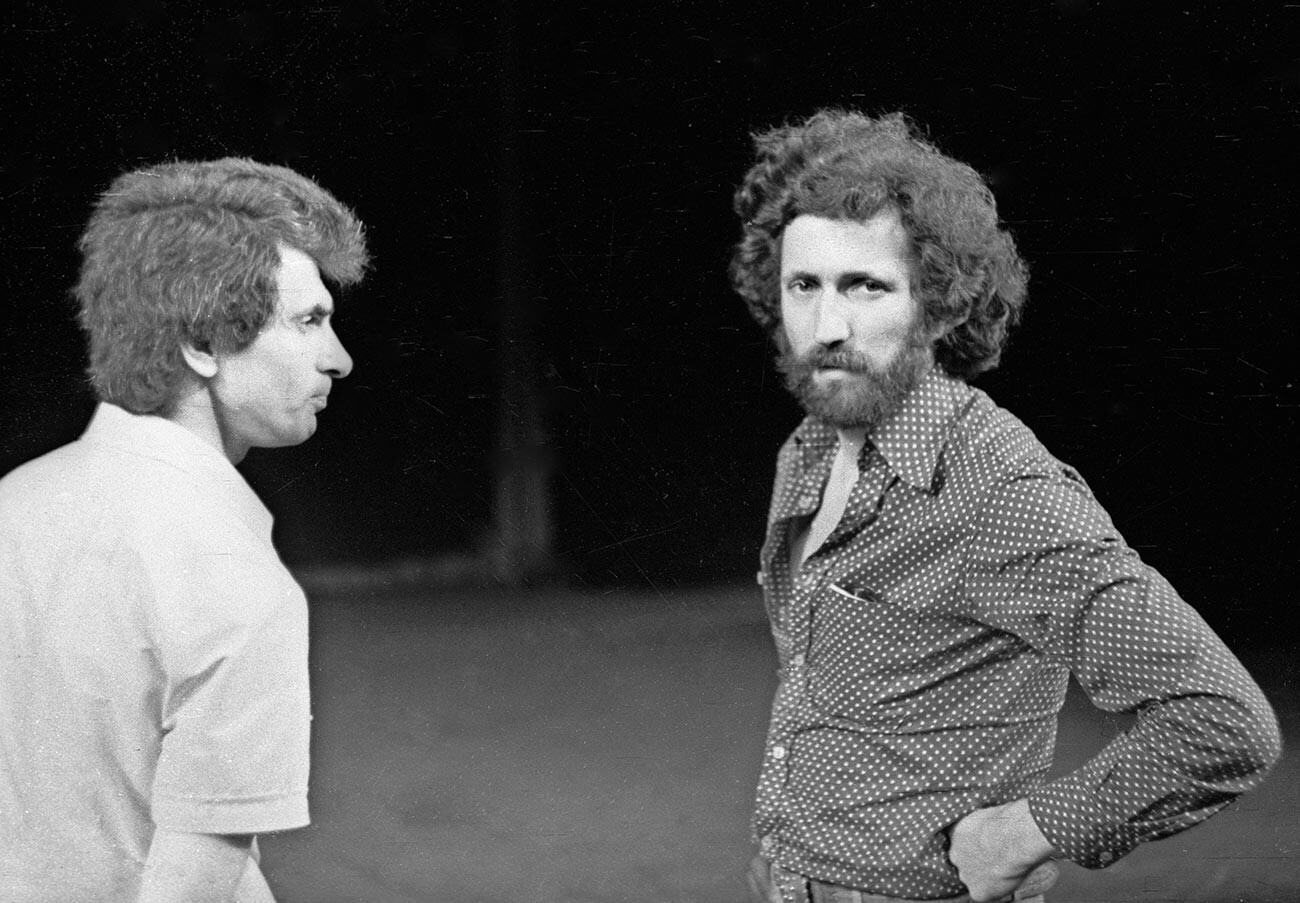 After graduating, Eifman began to teach dance and worked as an artist in the Moldovan Opera and Ballet Theater. His rich creative energy spurred him to create his own language of dance. Next, the young Boris went to Leningrad, one of the USSR's main centers of ballet. Eifman studied choreography at the Conservatory and graduated as a ballet master. In 1972 he began teaching at the iconic Leningrad Choreographic School (now the Vaganova Academy of Russian Ballet). 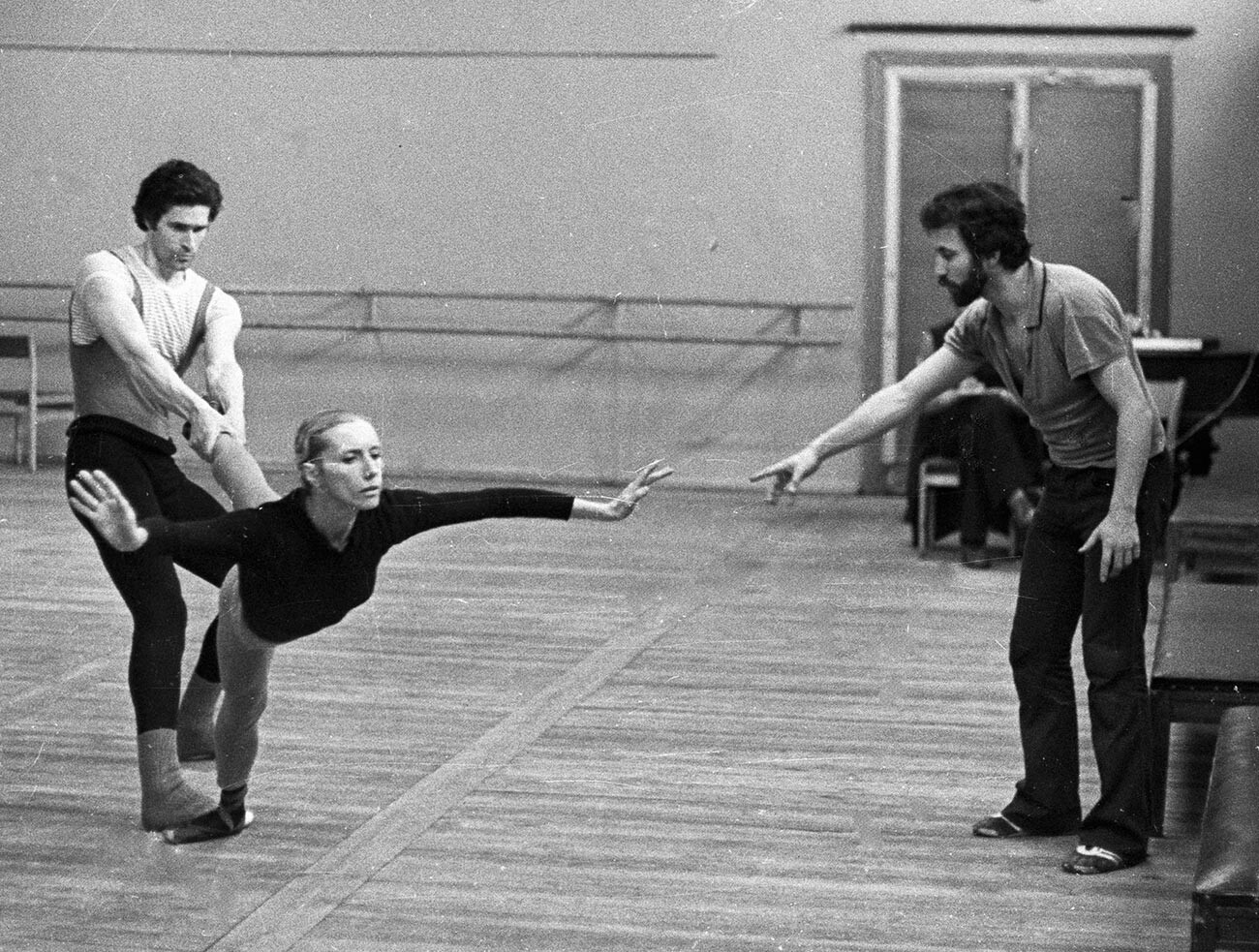 Choreographer Boris Eifman (right), Alla Osipenko and John Markovsky at the rehearsal in the Kirov Leningrad State Academic Theater of Opera and Ballet, 1985

His student works were even shown on the stage of the Kirov Theater (as the Mariinsky Theater was then known). The young choreographer chose unusual musical scores and composers for his productions. 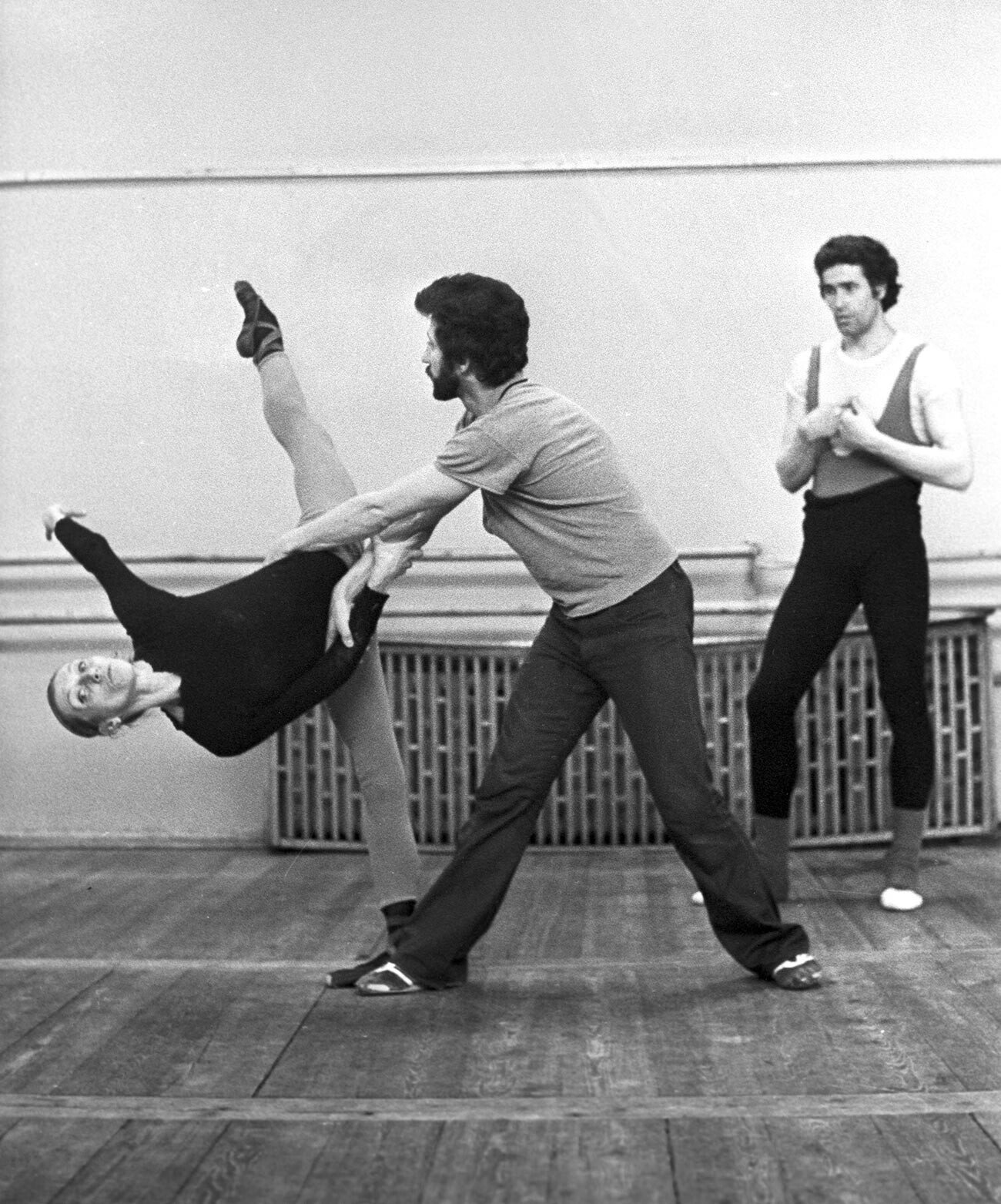 In 1977, Eifman was offered to work with a dance company that was part of "Lenconcert", which was the state organization responsible for holding concerts of classical and pop music. It was there that Eifman created his "New Ballet", which after the collapse of the Soviet Union became known as the “St. Petersburg State Academic Ballet Theater under the direction of Boris Eifman”, or simply as the Boris Eifman Ballet Theater. 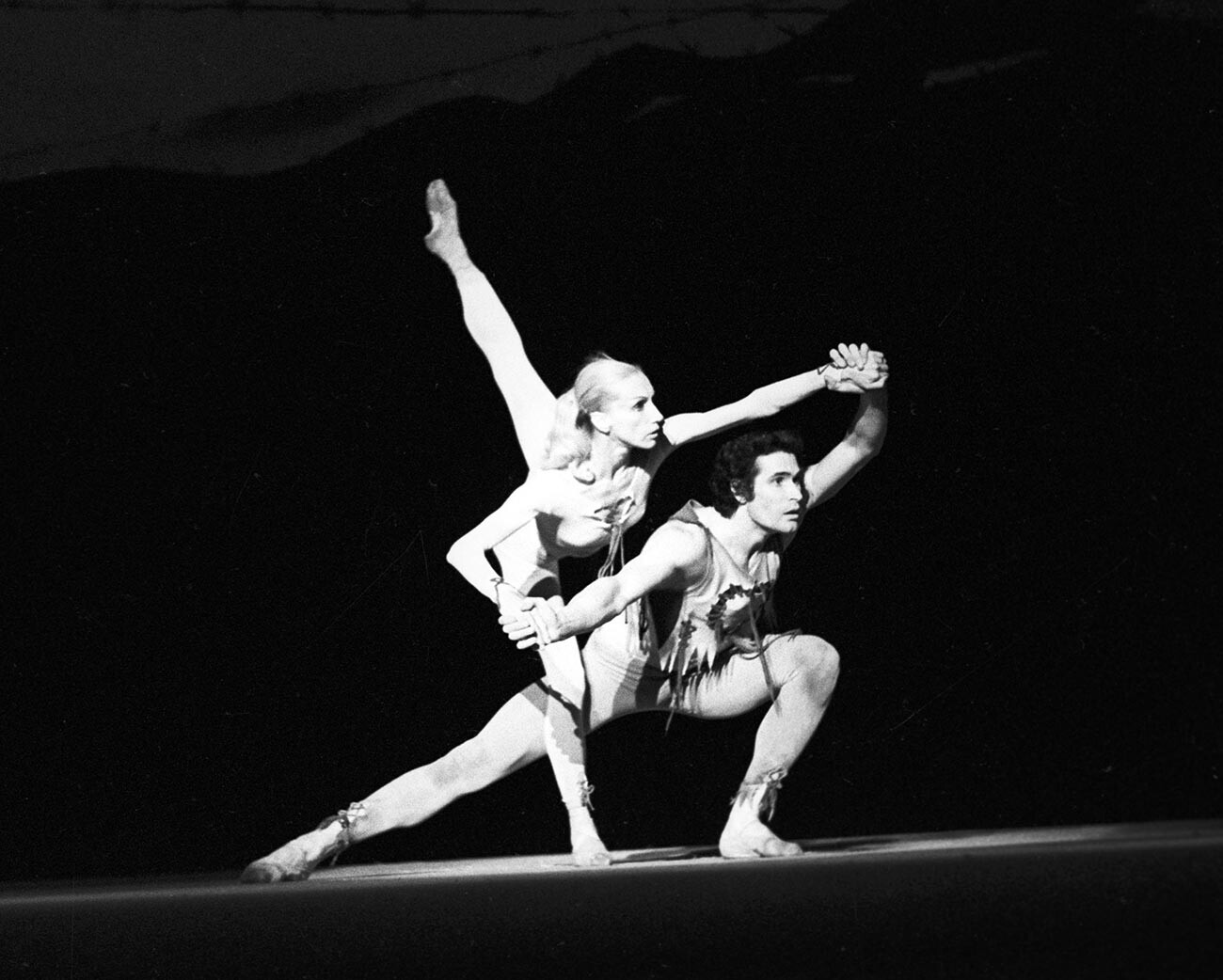 For the first productions, he invited leading Mariinsky Theater performers - Alla Osipenko, John Markovsky, Valery Mikhailovsky. In 1980, one of his first landmark shows was ‘The Idiot’, which was set to music by Pyotr Tchaikovsky. 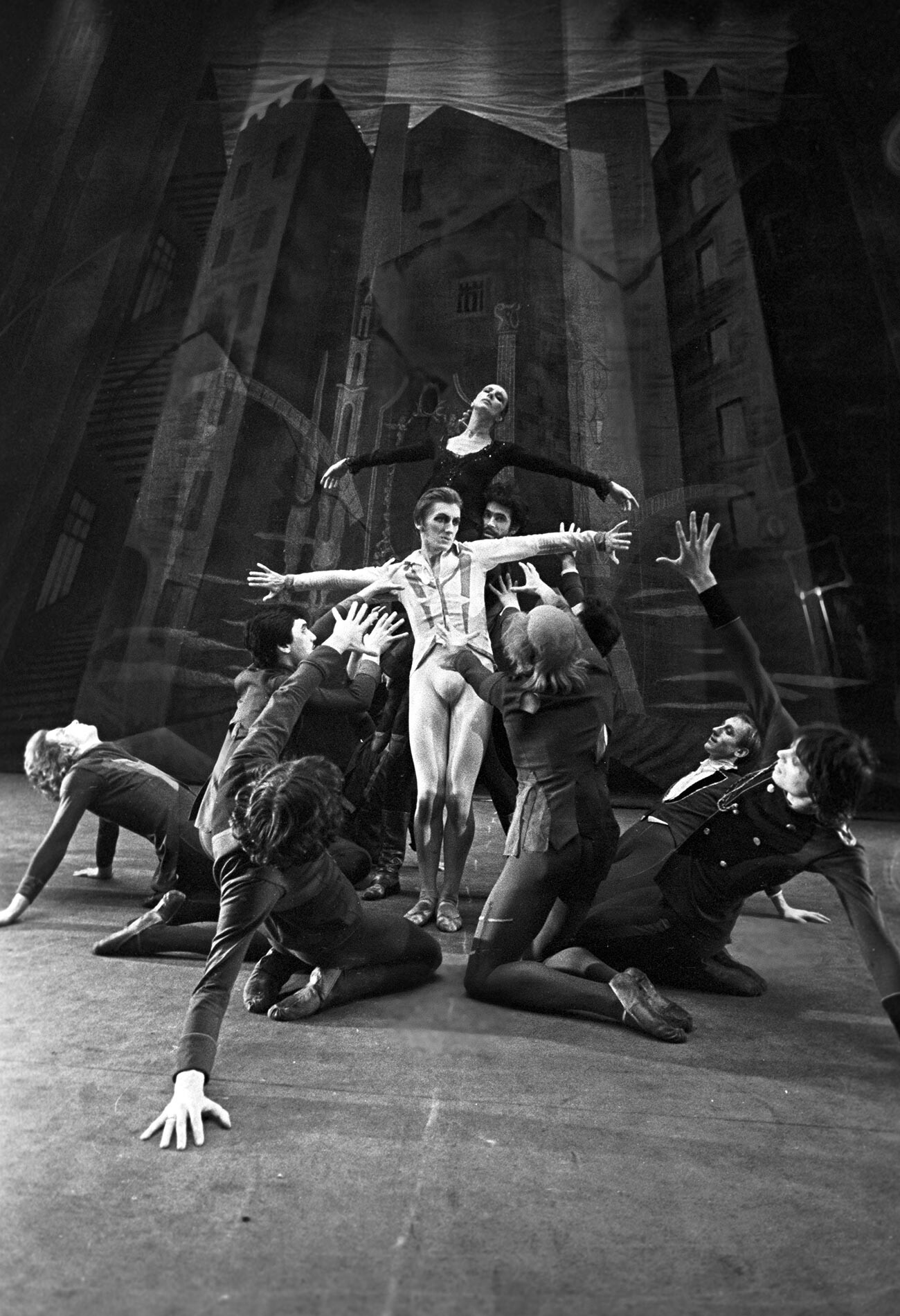 A new look at the Russian ballet

Only at first glance do Eifman's shows look like classical productions; the ones that we are used to under the “Russian ballet” brand. But critics around the world note that the maestro's choreography is incredibly sophisticated and replete with completely innovative elements unlike anything else. 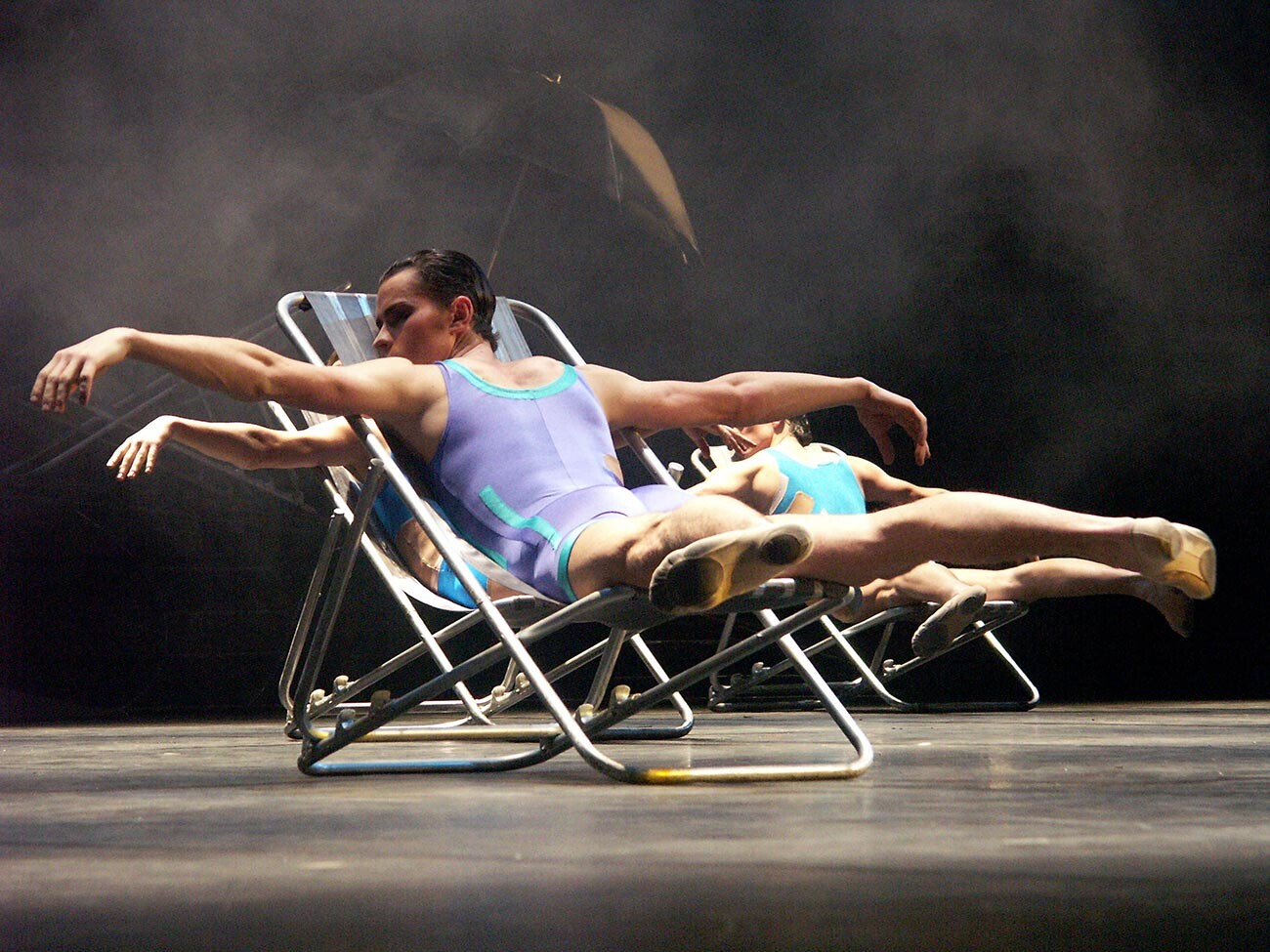 His ballets are distinguished by their unexpected scenic solutions, as well as by their unusual choice of literary basis. For example, the ballet “Up & Down” is based on F. Scott Fitzgerald’s novel Tender Is the Night and recreates the brilliant American Jazz Age on the stage. 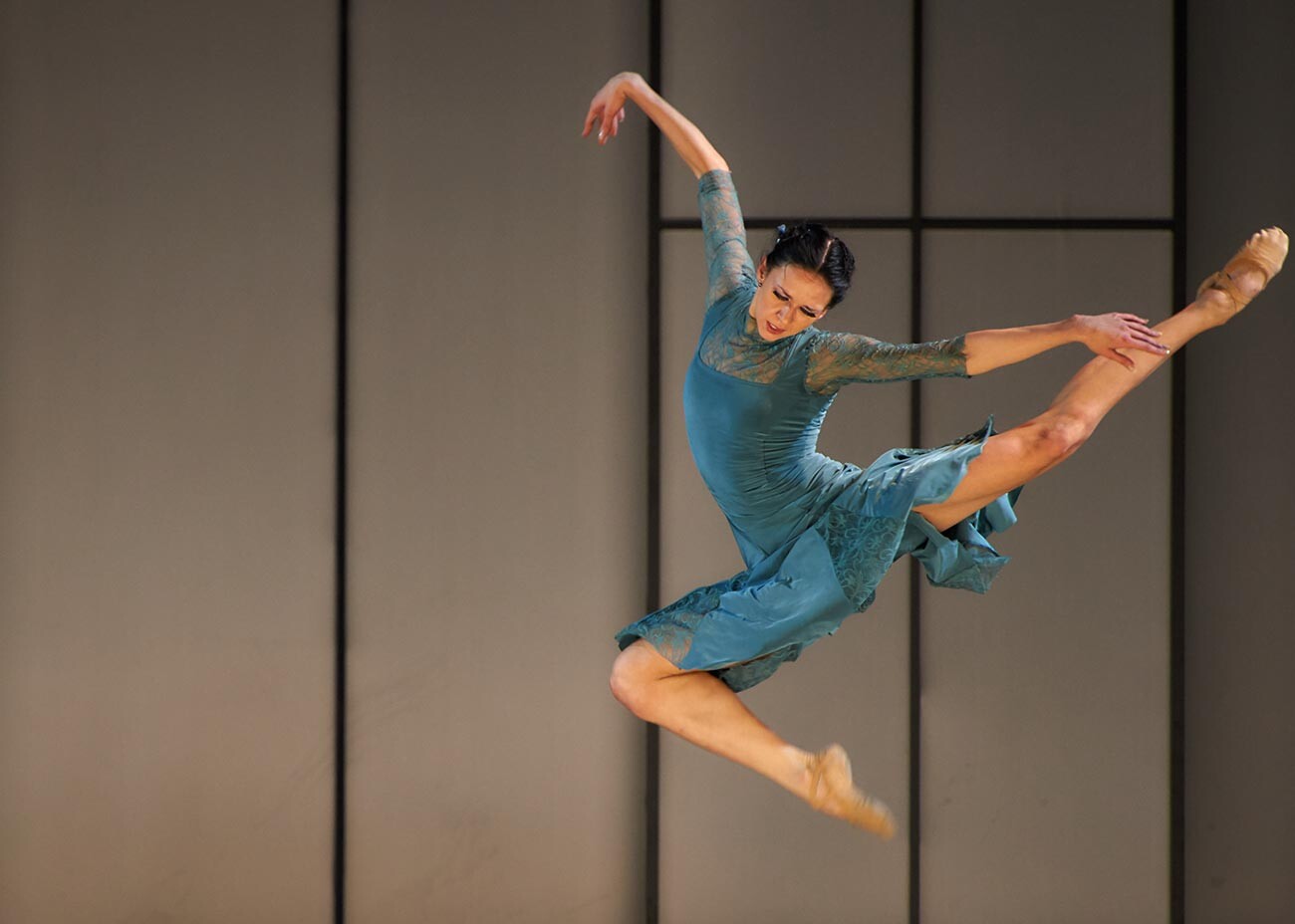 The dress rehearsal of Boris Eifman's ballet "Up & Down" at the Alexandrinsky Theatre in St. Petersburg, 2015

Eifman's take on the classical ballet “Giselle” has been praised around the world. His “Red Giselle” focuses on the dramatic biography of ballerina Olga Spesivtseva, who once was a star across Europe while performing in Sergei Diaghilev's Russian Seasons (including the leading role in “Giselle”). After the 1917 Revolution she was forced to emigrate to the United States, and succumbed to a mental illness, eventually dying in a psychiatric institution in New York. 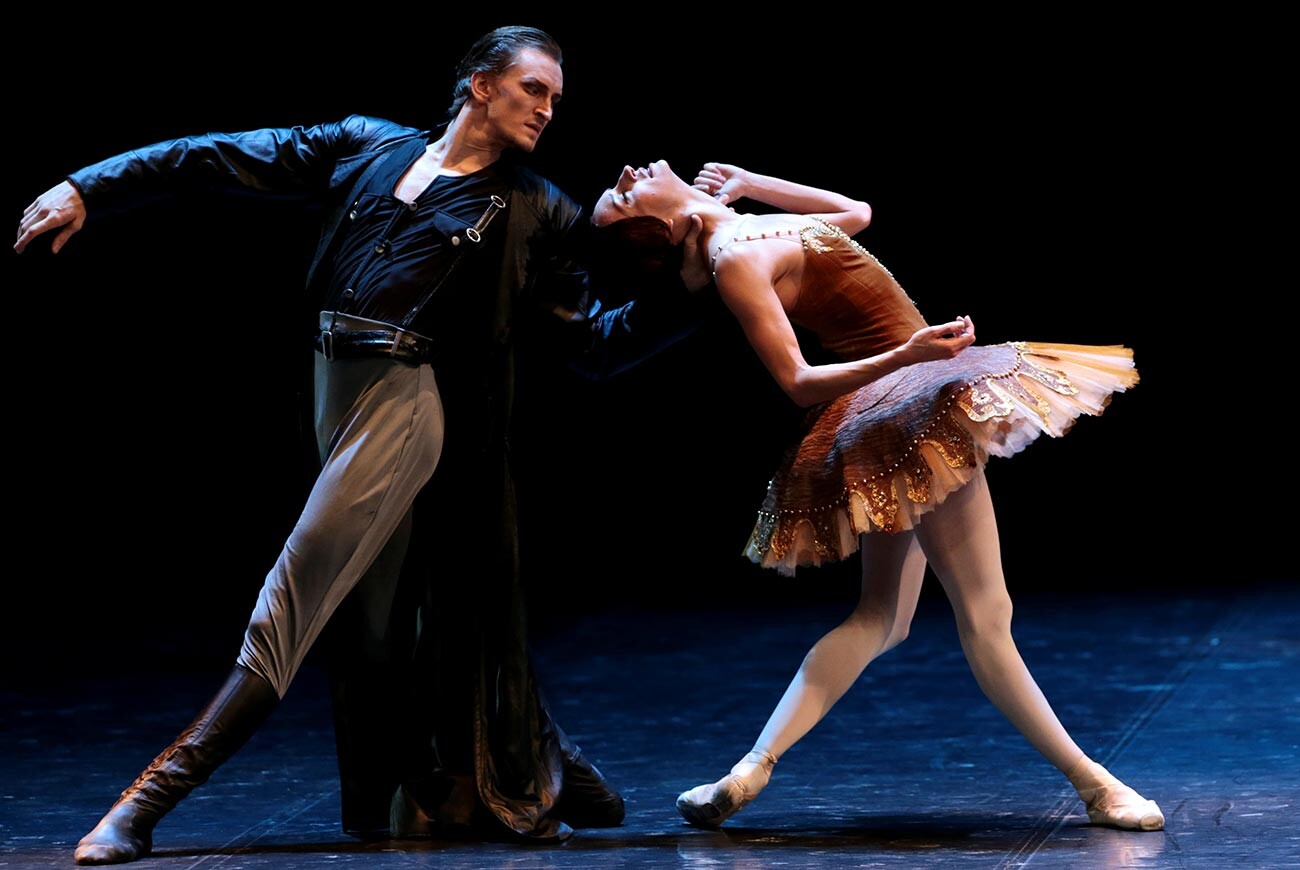 Actors Sergei Volobuyev as KGB Serviceman and Nina Zmiyevets as Ballerina in a scene from Red Giselle, 2013

You won't see the usual “Swan Lake” in Eifman's repertoire, but in the ballet “Tchaikovsky. PRO et CONTRA” he tries to comprehend the life and work of his favorite composer, to whom he repeatedly refers. 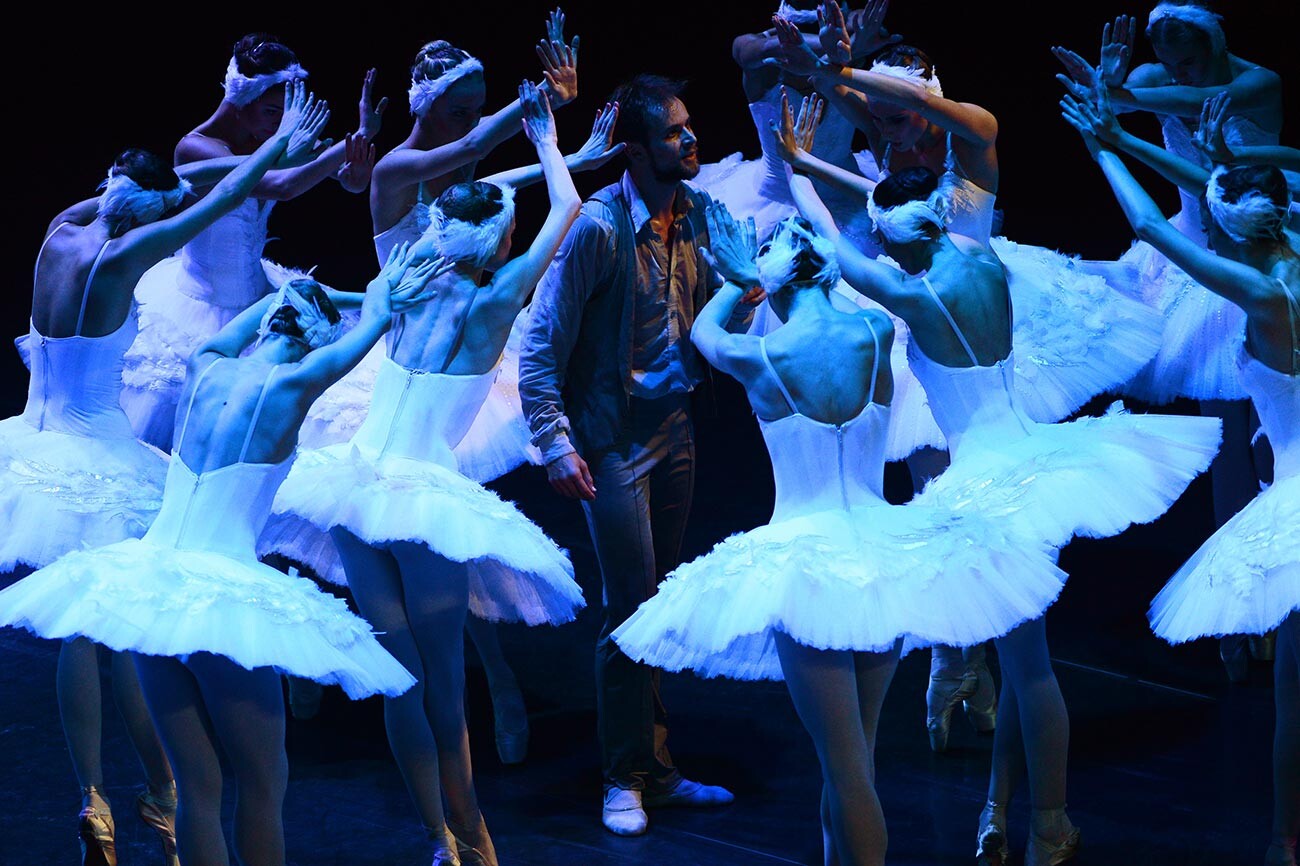 A scene from the "Tchaikovsky. PRO et CONTRA" ballet, 2016

“I wanted to create a work in which I could delve deeper into the environment of Tchaikovsky’s creative torment”, Eifman says of “Tchaikovsky. PRO et CONTRA”. The audience will see the swans in their legendary white tutus and recognizable scenes from “The Nutcracker”, as well as dance fantasies on the themes of the composer's famous operas “Eugene Onegin” and “The Queen of Spades”. 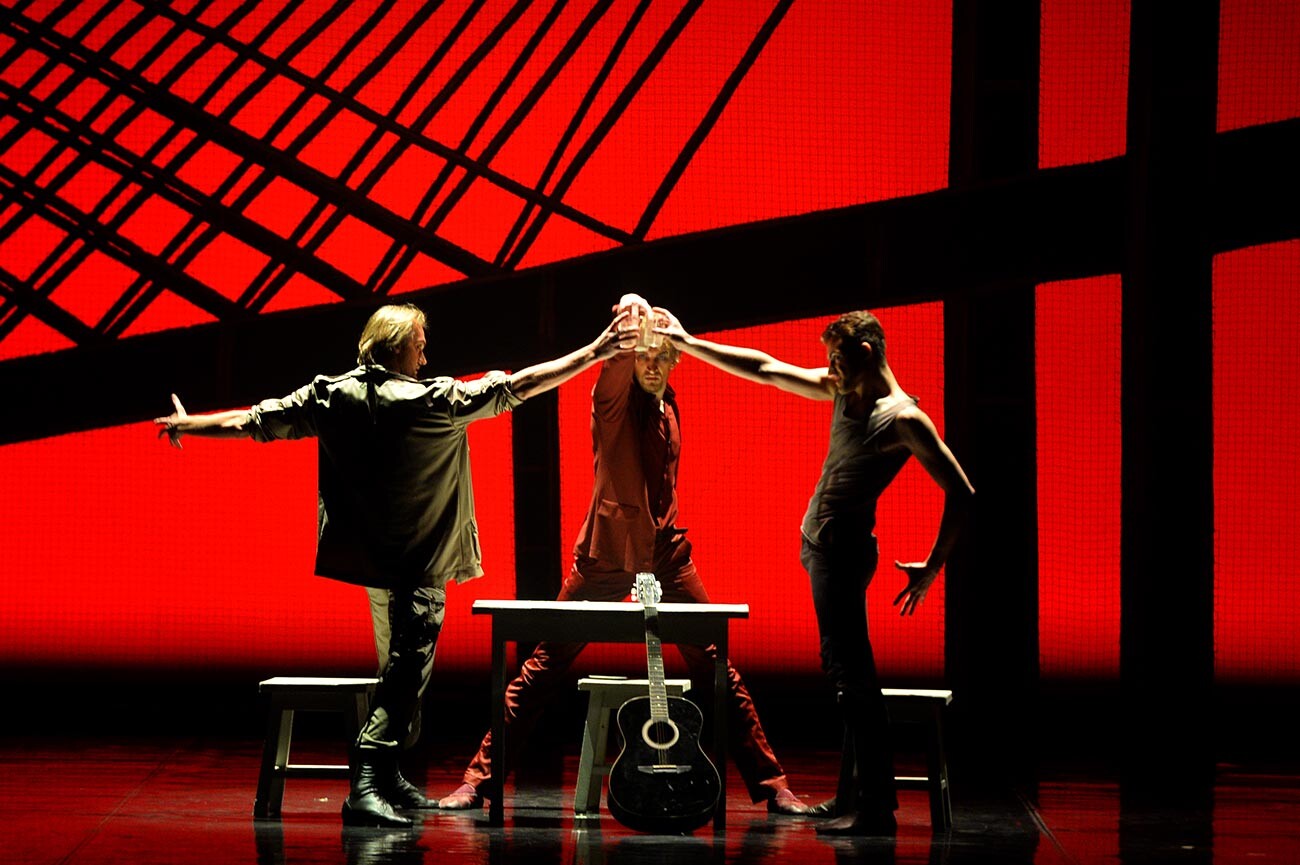 The most important thing for the choreographer and director is to reveal the psychological depth of his characters and plots. He is interested not only (and not so much) in the technical part of the dance but in the drama, the energy conveyed to the audience through his productions. 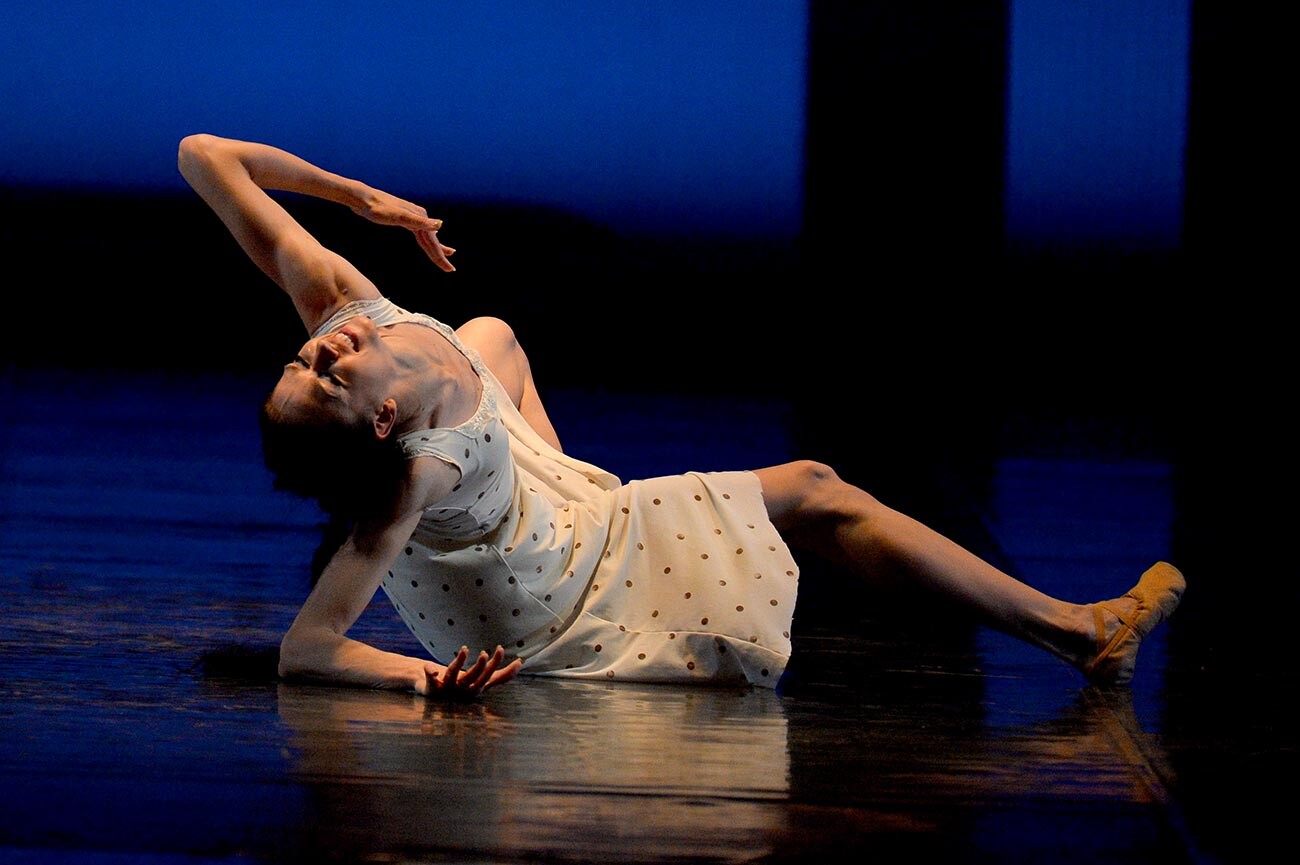 “I see my main purpose as opening up some new dimensions of the art of ballet as an insight into a person's inner world,” the choreographer says. 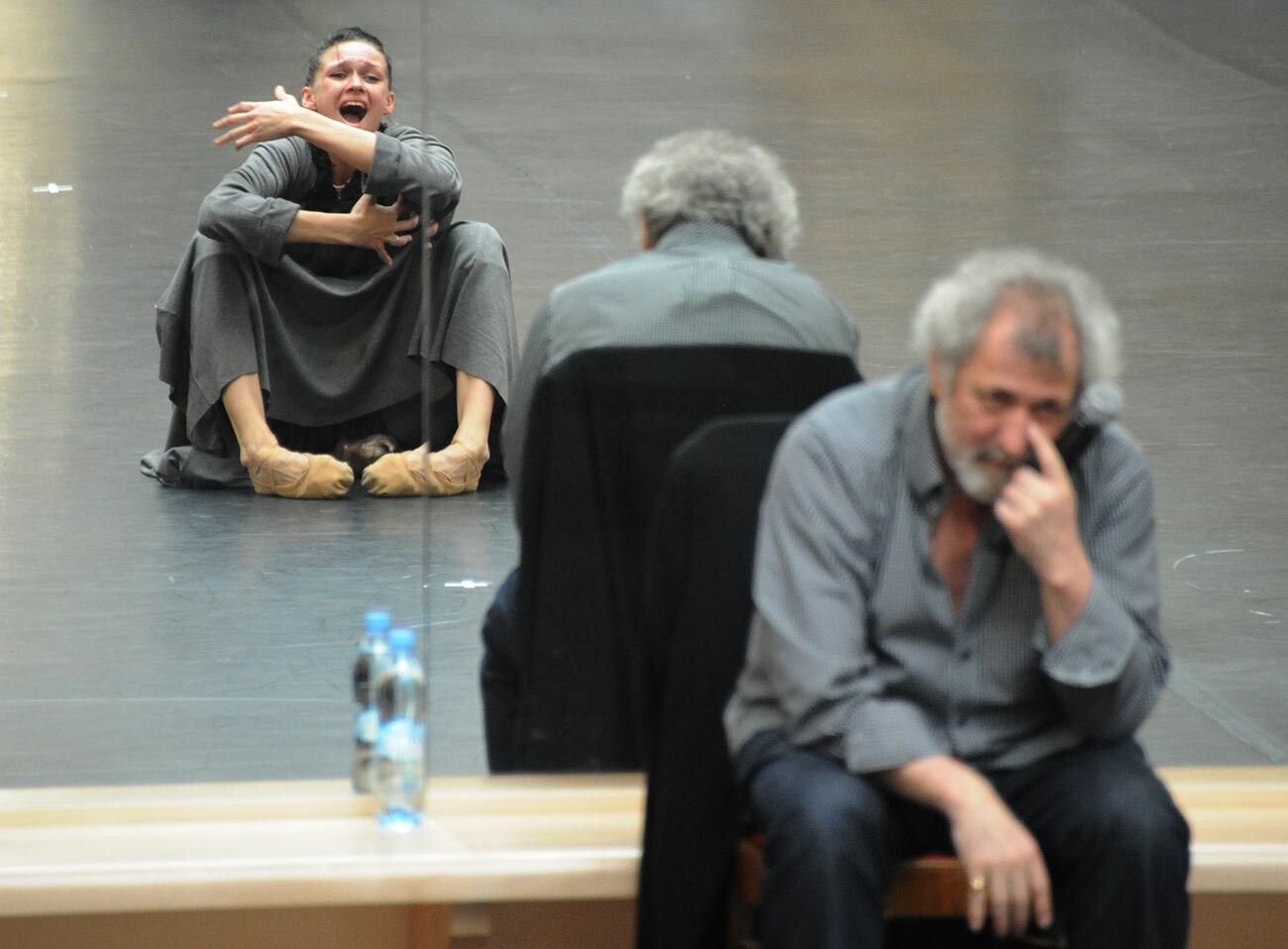 Boris Eifman and Lyubov Andreeva, soloist of the Boris Eifman Ballet Theatre, rehearsing a scene from the ballet "Rodin"

One of Eifman’s most emotionally powerful ballets is “Anna Karenina”, which focuses on the heroes of the Tolstoyian love triangle of Anna Karenina, her husband and Vronsky.

The maestro admits that his choreography is constructed and devised as his own emotional reaction to the music. 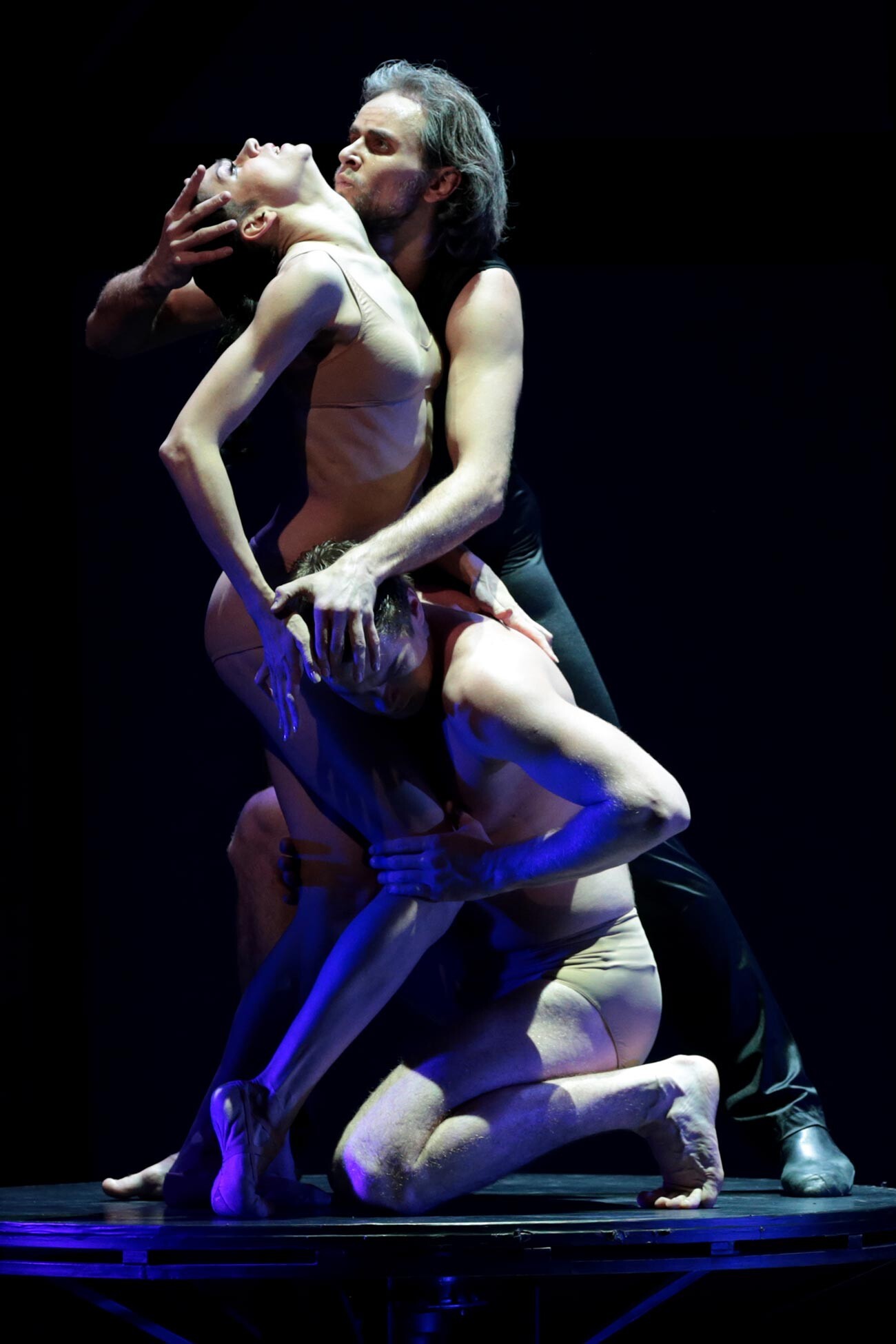 “I’m creating a different ballet, where self-expression becomes content, and which has drama, philosophy, strong characters, and ideas. And I’m sure this is the ballet of the future,’ Eifman says.

In 2014, marking the anniversary of the lifting of the Leningrad Siege, Eifman staged an amazingly intense and dramatic ballet, “Requiem”. The title refers simultaneously to Anna Akhmatova’s poem Requiem and to Mozart’s composition, which can be heard in the ballet, along with Dmitry Shostakovich’s symphony “In Memory of the Victims of Fascism and War”. 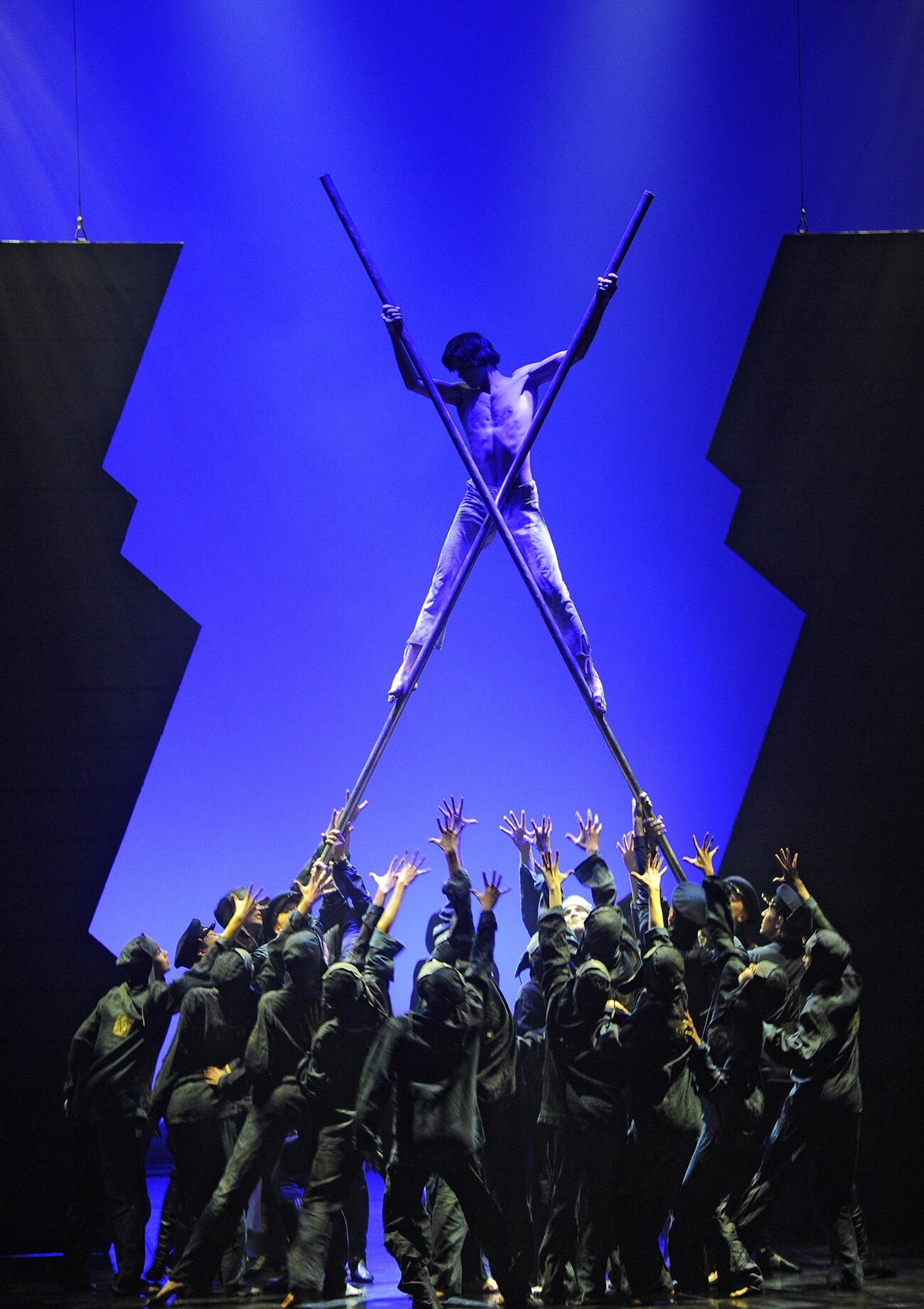 A scene of the Eifman's "Requiem" ballet dedicated to Leningrad's liberation from the blockade, 2014

In 2011, Eifman created his innovative ballet school – Boris Eifman Dance Academy. It works with children from the age of 10, and its goal is “to train universal ballet dancers” who are proficient in both classical and contemporary dance. 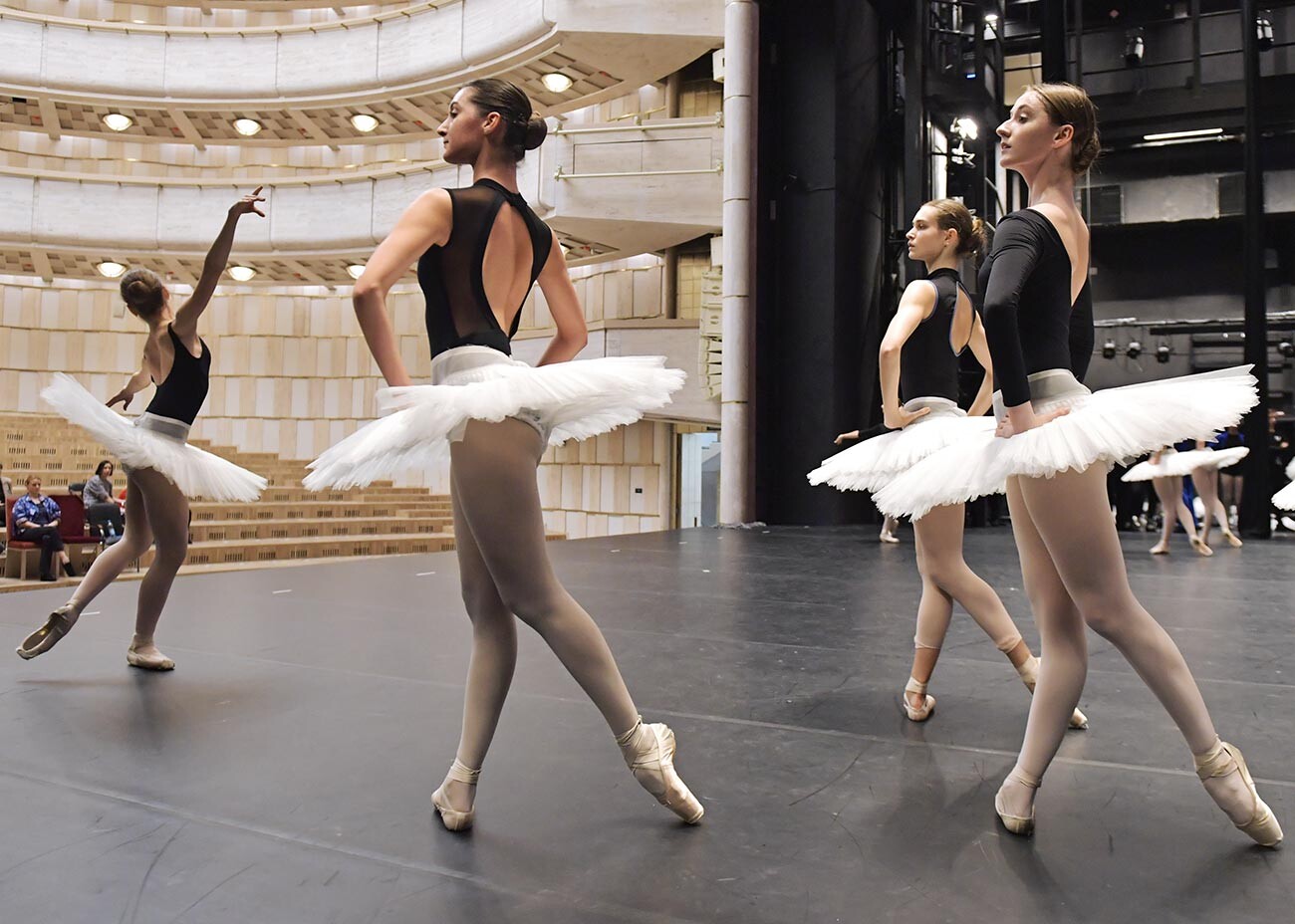 Students of the Boris Eifman Dance Academy at the open classes

Today, Boris Eifman is the winner of numerous theater awards and even various state honors, including the Order for Merit to the Fatherland. He is one of the world’s most famous choreographers, and critics in many countries have praised him and his work over the past few decades. 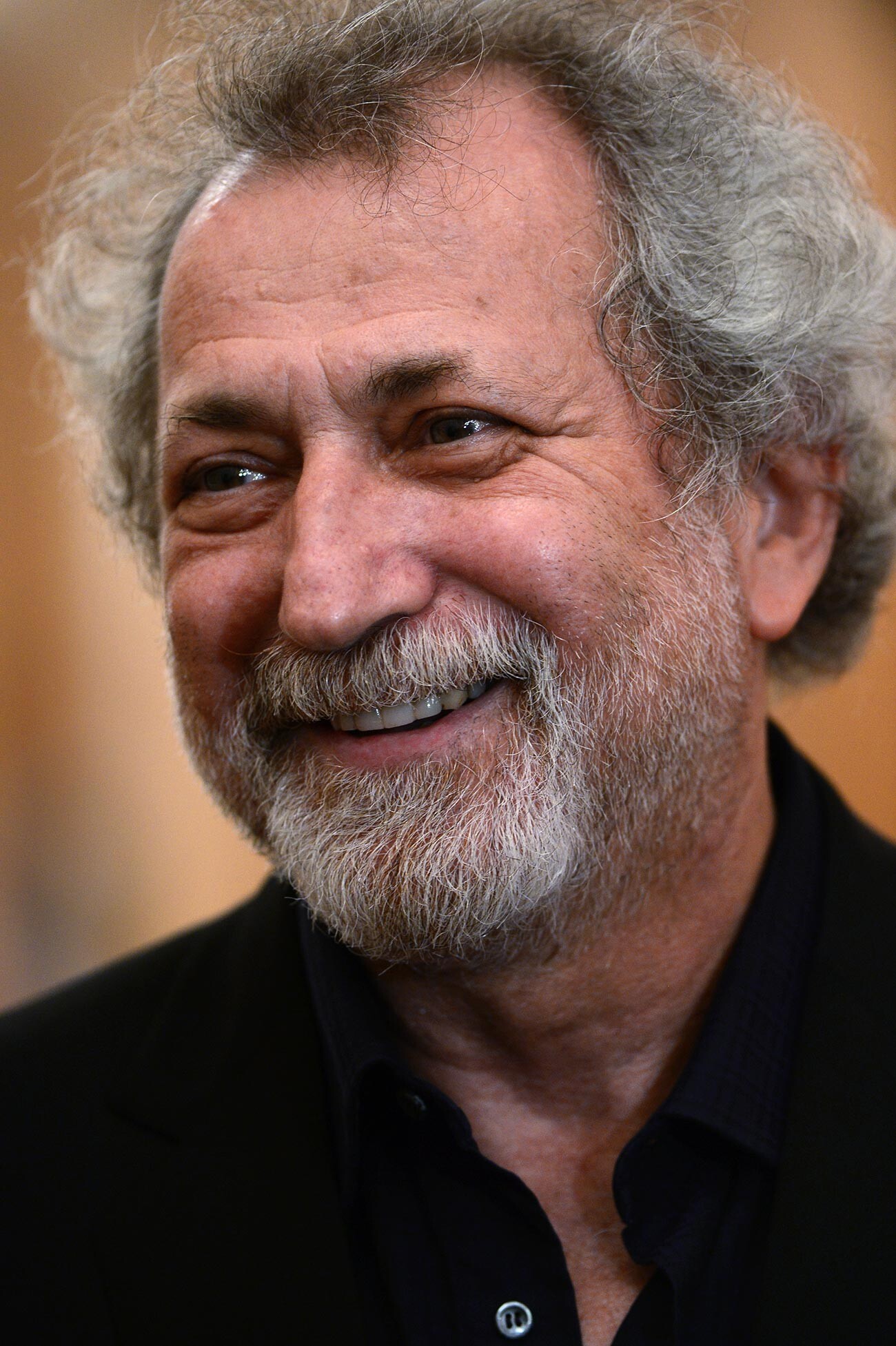 His theater is one of Russian ballet’s calling cards, touring  the world, and performing in the most prestigious venues, including the Bolshoi Theater in Moscow. 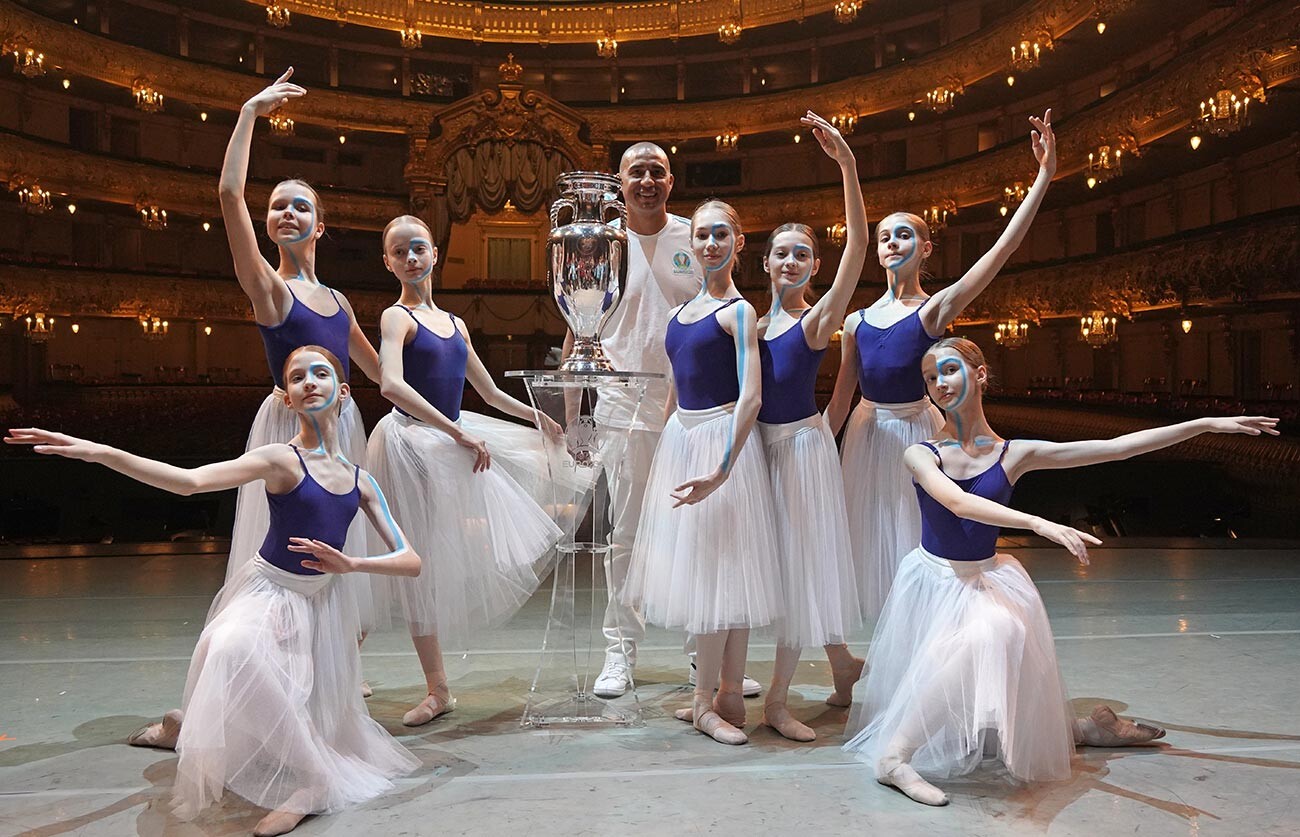 At the Euro 2020 trophy presentation