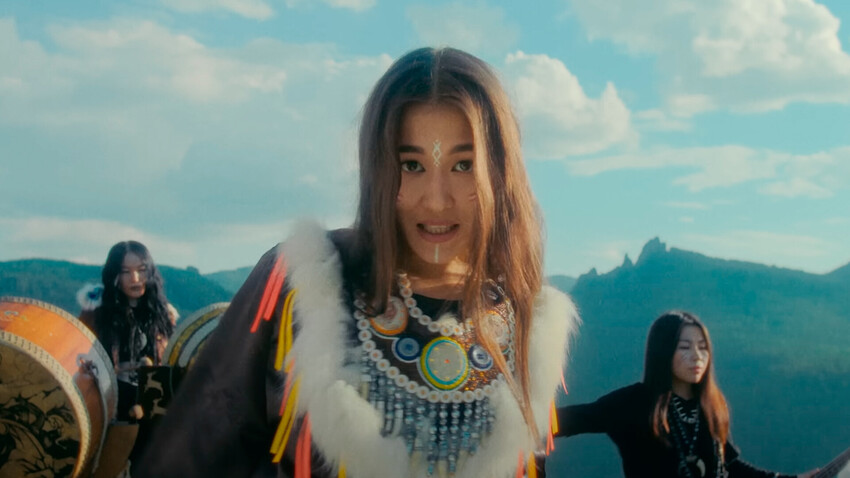 OTYKEN/Youtube.com
These members of disappearing ethnic peoples in Russia got together to form a band that breathes new life into the ethnic Siberian sound. And their tracks and remixes can now be heard the world over.

A group of aboriginal Siberian taiga people makes its way across a frozen river. The sky is gray and the wind is growing stronger: a storm is coming. They unpack their gear, pull out large drums and proceed to pummel them.

“Are you going east?” A girl in a colorful indigenous outfit and long black hair wails. “Then be careful!” This is followed by a song that can best be categorized as ethnic rock: there is throat singing, a keyboard sampler imitating an electric guitar, drumming and dancing. Also making it into the picture is a bass guitar-looking instrument made out of something that looks like the skull of a large animal - and you’ll find that that’s exactly what it is.

This is ‘OTYKEN’ and this is how their track ‘Storm’ begins.

The band members are all indigenous Siberians. Within six months, their track gained over four million views on YouTube. Today, the music is played at parties in Europe and beyond, while, in 2022, the band was nominated for the prestigious Grammy award for their song ‘Genesis’.

The group hails from Krasnoyarsk Region, in the heart of the Russian North. It was founded in 2019 and is the brainchild of Andrey Medonos, director of the local museum of ethnography. Their style is reminiscent of a mixture between rock, R&B and tribal electronica, complete with throat singing.

The cool thing is they’re performed in three languages - Chulym, Khakassian and Russian. All the band members are representatives of the Chulym, Ket and Selkup ethnic groups. And all hail from tiny villages in the remote taiga - no coffee shops, pharmacies or even electricity.

“My village subsists on fishing. If you were born a boy - you’ll fish. You don’t have to love it, but you will do it,” says Azyan, the leader and vocalist, who comes from a small Chulym village of only 200 people. According to one origin myth, the Chulym are the ancestors of turkic people; another states that they would eventually pass on their DNA to the proto-Japanese Ainu people and Native American tribes.

“My father also fishes. You catch one and have to consume it immediately. As soon as you dock, you must carve it while it is still alive, skin it and eat it quickly. That’s the only way,” Azyan says. Like her bandmates, she abandons touring in the summer and visits her family in the taiga, where traditional village life continues. ‘OTYKEN’s YouTube channel even has videos on how to collect wild honey, how to season and preserve wild catch and even instructions on how to paint on propolis (bee glue)!

The name ‘OTYKEN’ comes from the turkic word meaning the “holy place where warriors laid down their arms and held talks”.

According to Medonos, ‘OTYKEN’ gained popularity thanks to foreign tourists, interested in Siberian life. South and North Americans and Canadians are frequent visitors, often looking for parallels with their own cultures. At first, ‘OTYKEN’ had a more authentic and traditional sound, but, in order to increase their reach, the band began introducing outside elements. The tracks were going viral on TikTok and gradually began trending everywhere else.

The costumes were improvised, as well: they’re not really true replicas, but more of a mixture of traditional and modern elements. You’ll often see animal hides, feathers and traditional elements all rolled into one.

As for the instruments, the same principle of embellishment applies. “The most unusual instrument we have is the morin khuur [a Mongolian string instrument] made from a horse’s skull. We have other instruments and outfits as well: maracas, horns…” says Tsveta, who plays the Jaw harp.

The promotion has been going well thus far - Western audiences know even more about the band than domestic ones do. Edited versions and remixes of their tracks are routinely played by Jaydee, a Dutch DJ and producer, who often works with the likes of trance legend Armin van Buuren. “We get offered a lot of collabs from world-renowned DJs. We sent them audio stems, they remixed them [and] played them on European, American, Indian radio and at festivals,” Medonos says.

All of the above tactics have a positive impact on the project’s central idea: they’re here to make sure that ethnic music and the culture of indigenous peoples do not become a thing of the past. “We create bands to keep the folklore alive. A new [era] arrives and I feel that it’s all withering away,” Azyan adds. The all-Russian census in 2010 put Chulym numbers at just 355 living individuals. Only 44 of them spoke their native language.