All things Russian in ‘Harry Potter’ 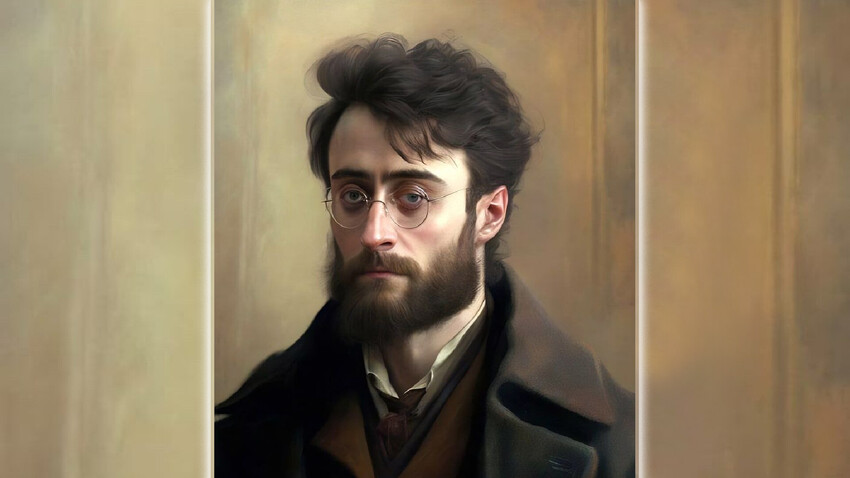 reddit.com/r/HarryPotterMemes
J. K. Rowling makes only passing references to anything magical happening outside the geographical area of the “parallel” Britain depicted in her Harry Potter books. But, sufficient references can be found to justify the confident conclusion that Russian magic also has an interesting - albeit not properly told - history.

Not a school but an institute!

Eastern Europe is a little-researched part of the magical world of Harry Potter. What do we know about it? Vampires live there - Harry’s mentor and friend, Hagrid, had a run-in with one in a pub in Minsk. Outlandish creatures like the Pogrebin - a hairy demon with a head like a boulder - live there. But, according to Newt Scamander, an expert and the main protagonist of Rowling’s ‘Fantastic Beasts’ series, there is no need to fear him - a Pogrebin can be chased away with a simple kick.

Of course, there are plenty of wizards and it has its own Hogwarts School - the Durmstrang Institute, which is located somewhere in Scandinavia, but accepts students of all nationalities. 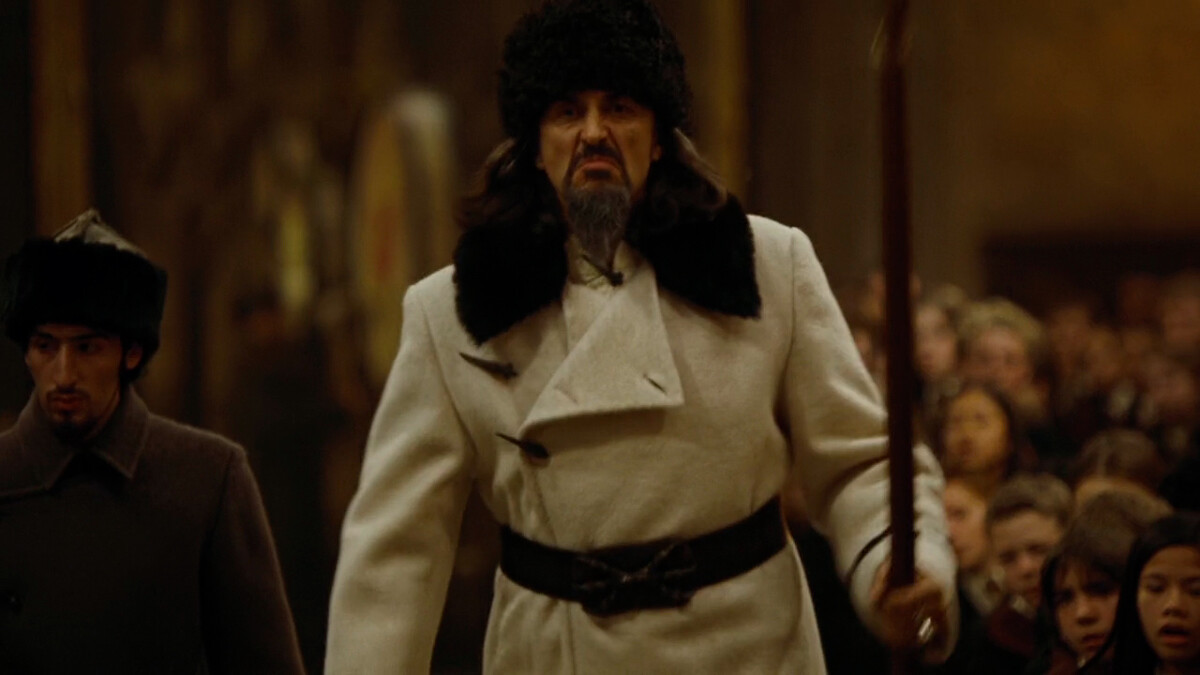 The international Quidditch star, Bulgarian Viktor Krum, attended it, as did a certain Poliakoff - apparently a Russian character, he is a bumptious drunkard and a favorite of headmaster Igor Karkaroff (quite possibly a Russian, too). In the screen adaptation, we even see the Durmstrang coat of arms depicting a Russian-style double-headed eagle and the dome of an Orthodox church. 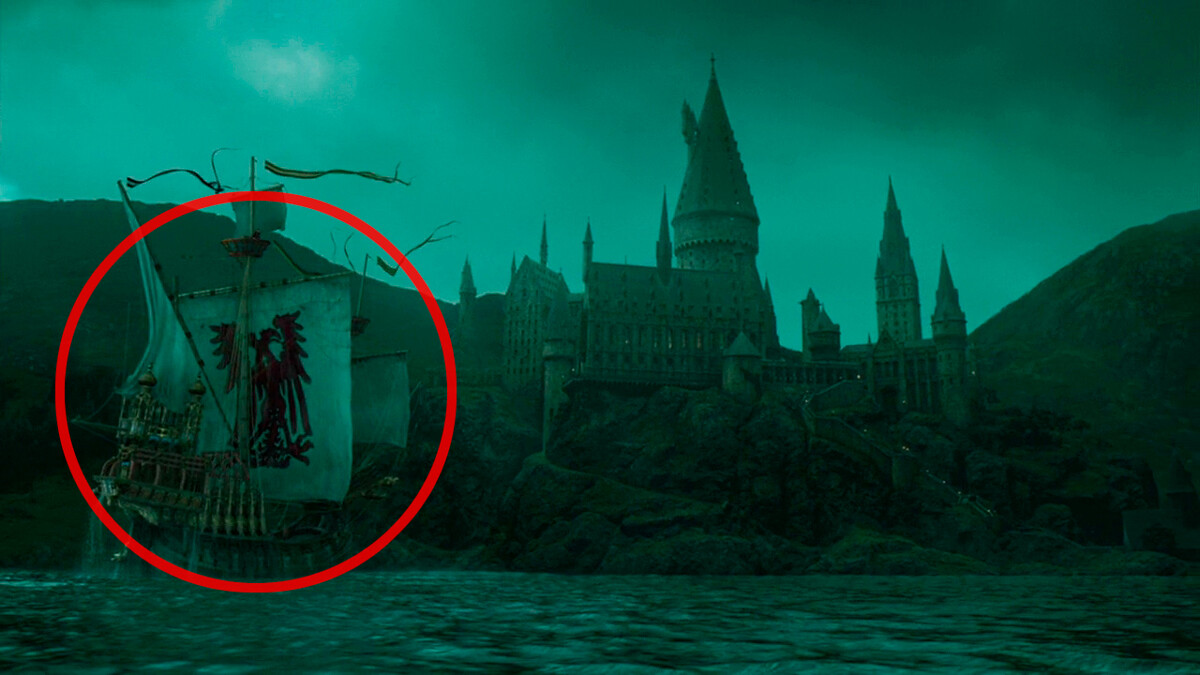 The Durmstrang coat of arms featuring the double-headed eagle

The only Russian protagonist who is essential for the plot of the whole saga is the notorious Antonin Dolohov, one of the original and most powerful followers of Lord Voldemort (who are also known as the ‘Death Eaters’). A murderer and sadist, he has tortured wizards, as well as Muggles who have crossed the Dark Lord’s path. Dolohov is sentenced to life imprisonment in Azkaban prison, from which he escapes many times. 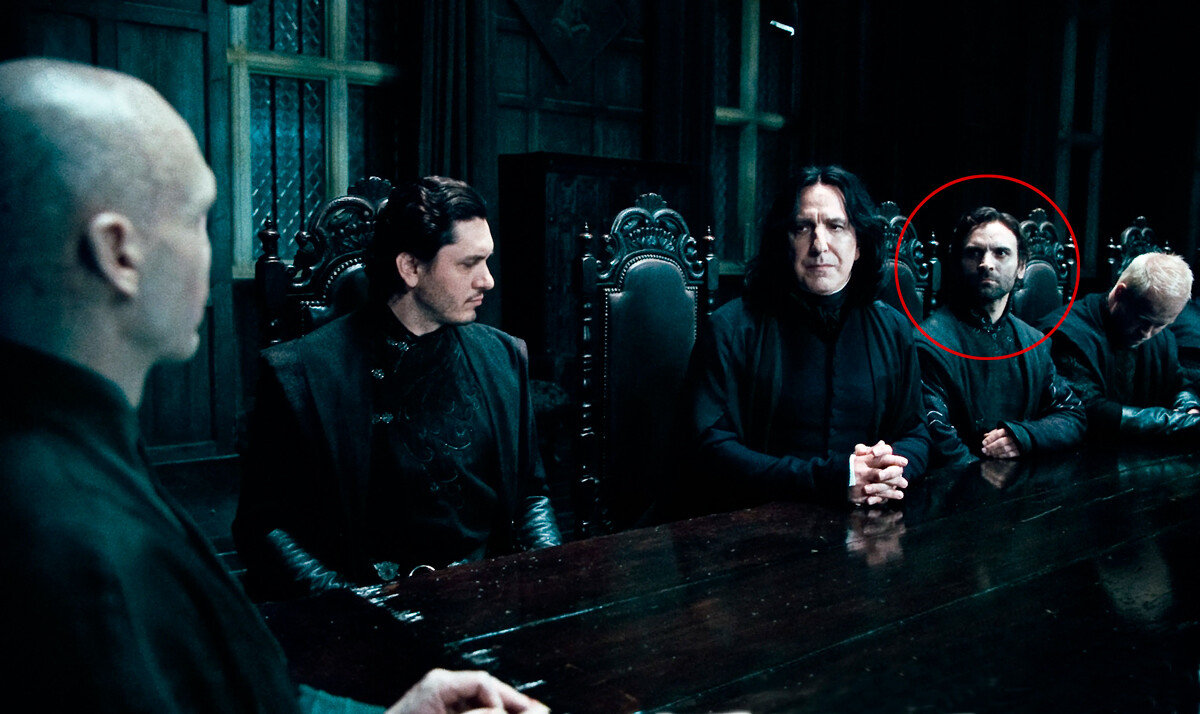 The first mention of him comes in ‘Goblet of Fire’ and he makes his first actual appearance in ‘Order of the Phoenix’ - he takes part in its culminating scene, the Battle of the Department of Mysteries. In it, Dolohov badly wounds Hermione. Several years later, in the Battle of Hogwarts, he kills Remus Lupin, a former Professor of Defense Against the Dark Arts and one of Harry’s closest friends. In the movie adaptation, Dolohov was played by Arben Bajraktaraj, a French actor of Albanian descent.

J. K. Rowling herself confessed that the villain’s name had been “borrowed” from Fyodor Dolokhov, a character in Leo Tolstoy’s novel ‘War and Peace’. Neither a dark wizard nor a monster, he was an extremely controversial personality nevertheless. An officer of the elite Semyonovsky Regiment and an inveterate duelist and card cheat, Tolstoy’s Dolokhov was prone to fits of rage and was capable of shooting a coachman’s horse or even killing a person. After the duel with Pierre Bezukhov, he was demoted to the ranks and later conducted himself heroically in the wars against Napoleonic France. 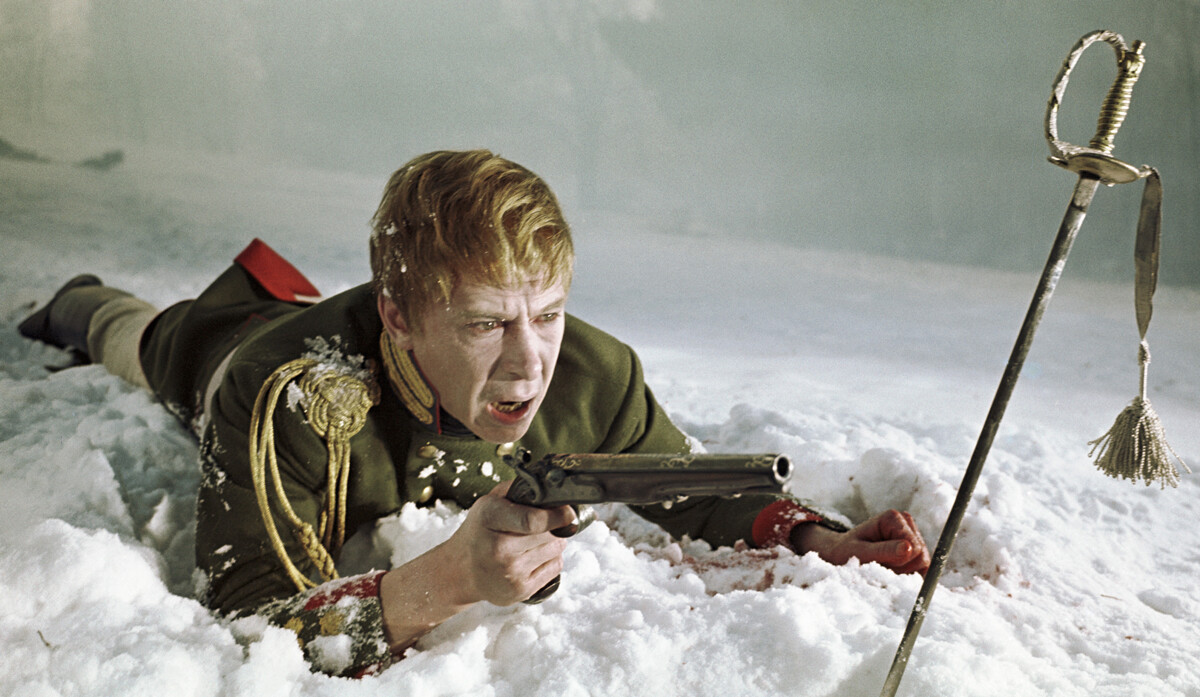 In the Soviet screen adaptation of Tolstoy’s epic novel directed by Sergei Bondarchuk - whose ‘War and Peace’ won an Oscar in 1969 - the part of Dolokhov was played by Oleg Yefremov.

The list of the best Quidditch players of all time includes a Russian name - albeit written with a glaring error. In English-speaking countries, Petrova - the feminine form of the very common Russian surname Petrov - is frequently taken for a feminine given name. 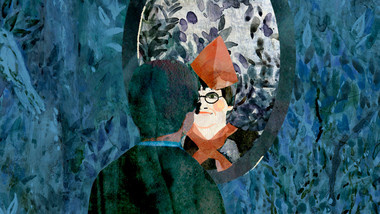 ‘Garri Potter’?! Why do Russians butcher English words that start with ‘H’?

For instance, in Noel Streatfeild’s ‘Ballet Shoes’ - a children’s book popular in Britain (first published in 1936) - a heroine with Russian roots is called Petrova Fossil. It is an interesting fact that ‘Hermione’ herself - or, to be more precise, actress Emma Watson - appeared in the movie adaptation of ‘Ballet Shoes’ (2007). It’s a pity that she played not Petrova herself, but her foster-sister, Pauline Fossil.

In other words, Rowling used a surname as her character’s given name, while apparently employing an inaccurate rendering of the Old Russian given name Praskovya for the surname. This is not a unique case in the Harry Potter books - Cho Chang, the name of the girl from Ravenclaw house whom Harry has a romantic relationship with, is a blend of two Chinese surnames. It might be added that the surname Porskov actually does exist - although it is not very common - and is apparently derived from the archaic verb porskat (meaning “to snort with laughter”). In the first Russian edition of the Harry Potter books, the translators decided to spare the reader and simply turned the heroine into a man by the name of Pyotr Porskov.

The Porskoff Ploy is a tactic used in Quidditch named in honor of Petrova. It is a deceptive maneuver in which one chaser flies straight upwards while surreptitiously passing the quaffle (ball) to a team-mate below.

Was Ivan the Terrible a headmaster at Hogwarts?

Fans of Russian culture can spot many familiar faces in the Harry Potter films. The school is crammed full of portraits of wizards of the past which are capable of coming to life  - and a number of exhibits have plainly been transferred here from the Tretyakov Gallery in Moscow. The walls of Dumbledore’s office are adorned with likenesses of former headmasters of Hogwarts - including a readily recognizable Ivan the Terrible painted by Viktor Vasnetsov.

A full-size reproduction of the selfsame painting hangs in another part of the castle. Attentive viewers have also found further “loaned” masterpieces - for instance, Ilya Repin’ ‘Archdeacon’ and ‘Taking a Rest’ and a portrait of the playwright Nestor Kukolnik painted by Karl Bryullov.

Apart from that, the particular design of a tea-glass holder on Dumbledore’s desk has enabled devotees of antiques to attribute it to the Leningrad Jewelry Factory. Perhaps, at some time in the past, the great wizard was traveling around Russia by train and grabbed himself a souvenir. 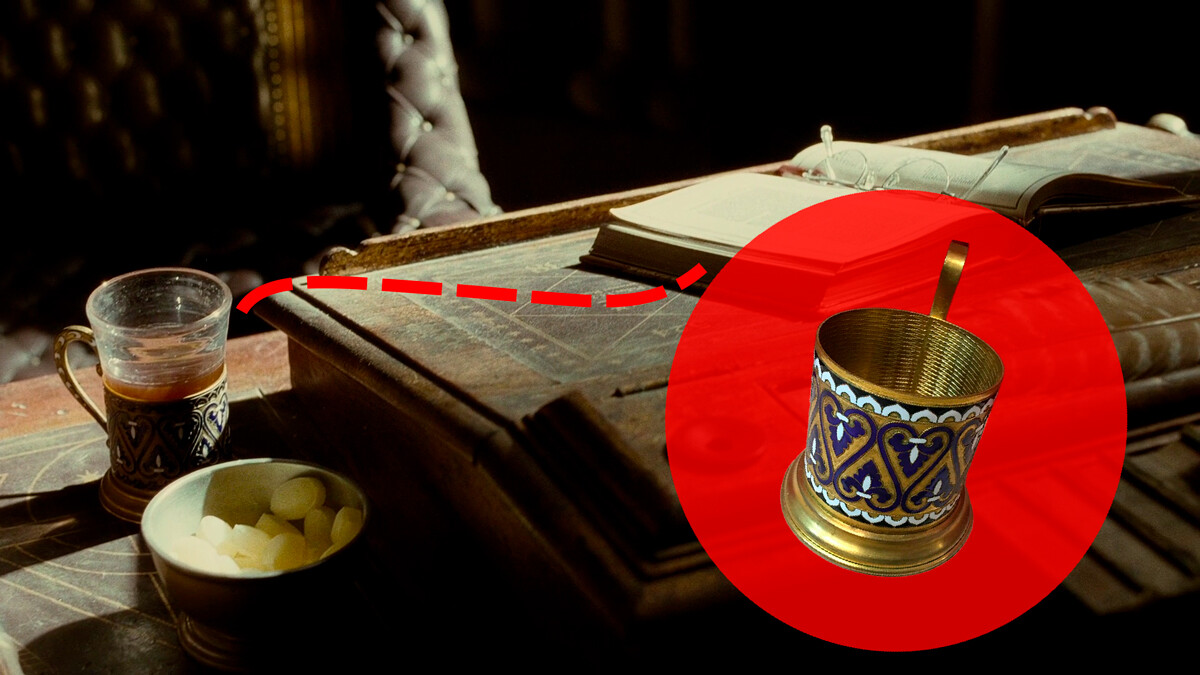 A tea-glass holder on Dumbledore’s desk