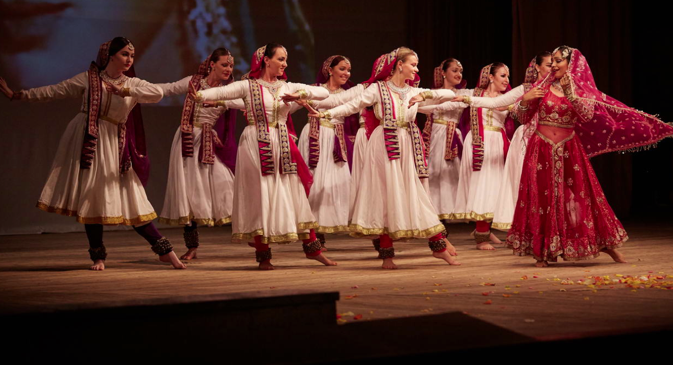 The 2nd Indian Film Festival took place in Moscow between September 3 and 6, with the support of the Embassy of India in Russia and the Jawaharlal Nehru Cultural Centre. The main venue of the festival this year was Formula Kino Gorizont, where the audience viewed as many as six new Indian films in four days.

The opening ceremony at the Indian Cultural Centre was attended by the star team of Bollywood actors, directors and producers, including Madhur Bhandarkar, Raima Sen, Radhika Apte, Sheel Kumar and Ayushman Khurana. Surprisingly, for many, the special guests of the evening were the well-known Russian musicians Dima Bilan and Sati Kazanova, the friends of the festival's president Sarfaraz Azam, and, by their own admission, longtime fans of Indian culture. Each of them addressed the organizers and guests of the festival with a complimentary speech and shared their childhood dream (that they all appeared to have in common) to play the lead part in an Indian film, in which the music is known to be more important than words.

Many fans of Indian cinema gathered in the screening hall and, despite the almost an hour-long delay of the opening ceremony, there were almost no empty seats. According to Anna Gutovskaya, general director of the festival, the main thing that attracts the Russian audience to Indian cinema both today and a decade ago are the common human values ​​of the two peoples. The cult of the family, respect for elders and love for children remain unchanged despite globalization, development of technologies and superficial lifestyle changes.

As proof of this, the festival opened with the film “Piku”(2015) by Shoojit Sircar; the story of the complex relationship between a father and his adult daughter, each of them trying to find a way to each other in his/her manner. The timeless parent child conflict, familiar to every viewer anywhere in the world, set against the backdrop of modern India, of which the Russian audience knows little. The show at the festival became the Russian road show of the film, before it was only shown back in India, and, among European countries, only in Ireland. Sircar brought two other of his films to the festival; the spy thriller “Madras Café” (2013) and the comedy “Vicky Donor” (2012).

The modern-day remake of Shakespeare's ‘Hamlet’ called “Haider” (2014) by Vishal Bhardwaj, was the festival’s closing movie. The Asian Film Academy named “Haider” the film of the year this year, and Vishal Bhardwaj won the best director award. The festival also included the films “Let the heart beat” (2015) by Zoya Akhtar, “Bombay Talkies” and “Tanu Weds Manu Returns” (2015) by Anand Rai.

Part of the festival’s concurrent programme was to showcase contemporary Indian film fashion by graduates and teachers of JD Institute of Fashion Technology. Over three dozen women’s dresses designed specifically for Bollywood were shown to the audience. A photo exhibition of photographs by Oleg Singareev, Anatoly Strebelev and Elena Raskaley, dedicated to India, was opened in the lobby of the Indian Cultural Centre.

After Russia, the Indian Film Festival will move on to Switzerland, Nigeria, Singapore and Azerbaijan.