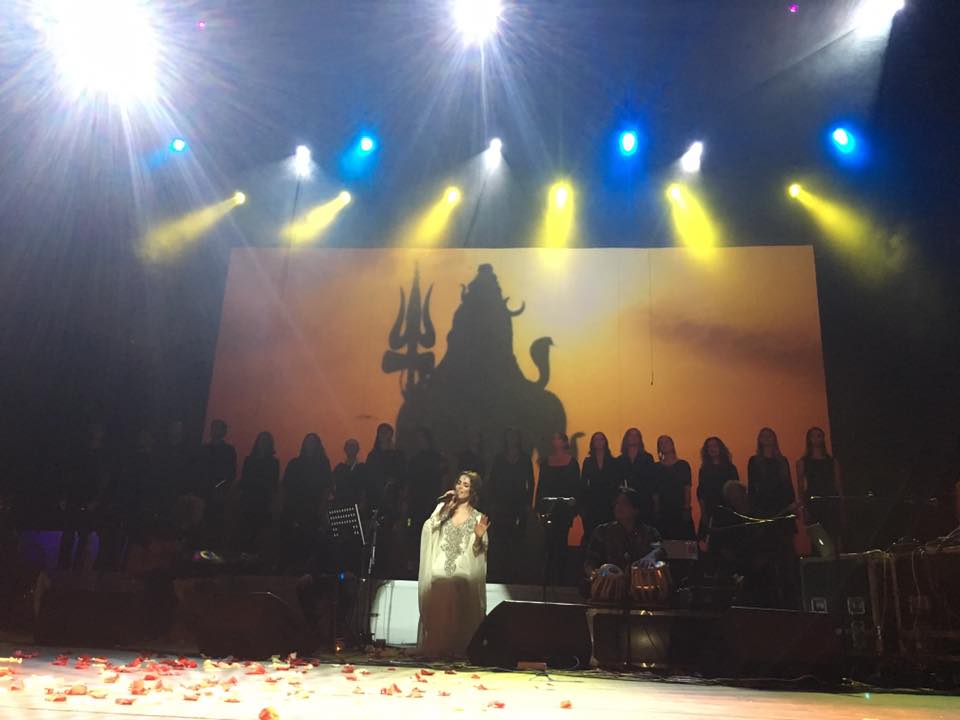 This programme was a unique initiative with the Russian singer Sati Kazanova and artists from the JNCC performing.

Embassy of India in Moscow
‘Swaranjali,’ a concert of fusion music, combining traditional Indian classical music and dance, in part performed by Russian singers, was held in Moscow on Thursday under the aegis of the Jawaharlal Nehru Cultural Centre of the Embassy of India.

The ‘Swaranjali: Music of the Soul’ concert of fusion music was held on Thursday, May 26, in Moscow under the aegis of the Indian Embassy’s Jawaharlal Nehru Cultural Centre. The JNCC hosted the concert at the Russkaya Pesnya theatrein Moscow’s Prospekt Mira.

"Swaranjali: Music of the Soul," brought together Russian and Indian musicians on the same platform, to focus on the purpose of music as a source of truth and unity. “Because of its emotional power, music is able to touch the hearts and artist and the listener,” the invitation stated.

This programme was a unique initiative with the Russian singer Sati Kazanova and artists from the JNCC performing. Gulfam Sabri, Tabla (Indian traditional percussion instrument) maestro and Dharmender Gautam, maestro of ‘Kathak’ (classical Indian dance form) presented the beauty of the world in all its manifestations through music and dance.

The ‘Russkaya Pesnya’ theatre was filled to capacity and the audience sat enthralled through the two hour long concert. Kazanova shot to fame in the Indian expat community in Russia after her performance at the ‘Friends of India’ event during Indian Prime Minister Narendra Modi’s visit to Moscow in December last year.

Russians and Indians alike appreciated her exotic rendition of Indian mantras in Sanskrit, accompanied by Western instruments including the harp. The evening included a variety of compositions in Kabardian & other languages, and the recitation of a passage in Russian from Kahlil Gibran’s ‘The Prophet’. Speaking of rebirth and reincarnation, Kazanova hinted that there was no logical explanation of her being so intensely drawn to Indian culture.

G. Balasubramanian, Deputy Chief of the Indian Mission, greeted the audience and thanked the co-organizer, ‘Darbar’ Indian Restaurant, for the event. The programme began with a Ganesh vandana. Through her music, Kazanova attempted to illuminate three aspects of a woman – ‘Saraswati’, ‘Lakshmi’ and ‘Durga’.  She was supported by a troupe of non- professional singers called the ‘Sunny Side Singers’ who, because of their love for India and music, have taken to singing as a hobby. None of the singers used notes, reciting the mantras by heart. The audience joined in the chant of “Om Namah Shivay” at the behest of the singers. Dancers from the JNCC, under the guidance of Kathak maestro Gautam, performed to the mantras in artistically choreographed harmony.

The evening ended with Kazanova thanking the audience and Ashish Sharma, Director of JNCC, for giving her a platform to express her love for Indian culture through her music.