Sunlit frosts and snowstorms: The Russian winter in literature 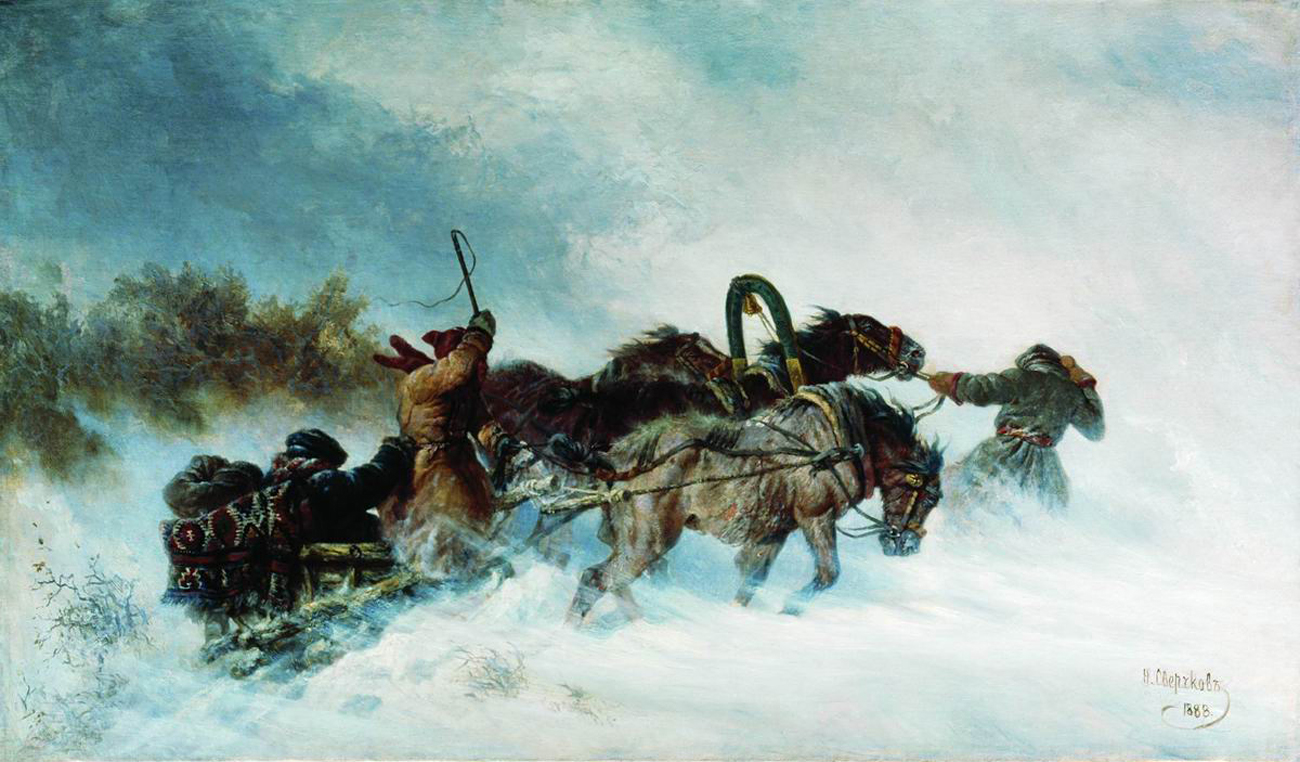 Nikolai Sverchkov
The harsh Russian winter is legendary, but writers and poets reveal its beauty and romanticism in classic novels, short stories and poetry.

Each season has inspired Russian writers and poets in its own way. But winter had a particular effect: the ringing silence, the glow of snow, the bells of a speeding troika, the creaking of blades and the crunch of steps - just about every Russian classic has described these.

The peculiarity of the Russian character manifests itself in the love of winter: dreaminess, thoughtfulness, detachment, existing somewhere "beyond," in some kind of fairytale half-sleep. At the same time, a constant readiness to fight the nature surrounding it - a blizzard, a snowstorm, the fierce chill - has tempered the Russian national disposition, making it stronger and complete.

And of course, winter is the time for Christmas tales and magical stories.

1) Alexander Pushkin, The Snowstorm (from The Tales of Belkin)

A blizzard interferes the fate of Pushkin's protagonists in The Snowstorm, changing their lives. The heroine is unable to marry her betrothed, who is stuck in a snowstorm on the eve of the wedding and could not find the road to the church.

“Hardly had Vladimir passed from the outskirts of the town to the fields, however, when the wind rose up and whipped itself into such a storm that it became impossible to see anything. Within minutes the road was covered in snow; his surroundings disappeared in a dark and yellowish haze, through which white snowflakes flew. The sky and the ground merged. Vladimir, who found himself in a field, tried in vain to get back on the road; his horse stepped forward randomly over and over again, now making his way up a snow bank, now falling into a hole. Again and the sleigh overturned. Vladimir focused only on not losing the true path. <…> The storm was not abating, the sky had not cleared. The horse began to grow tired; Vladimir’s sweat was coming thick and heavy, despite the fact that he had gradually sunk belt-deep in the snow.”

2) Nikolai Gogol, The Night before Christmas (from Evenings on a Farm Near Dikanka) 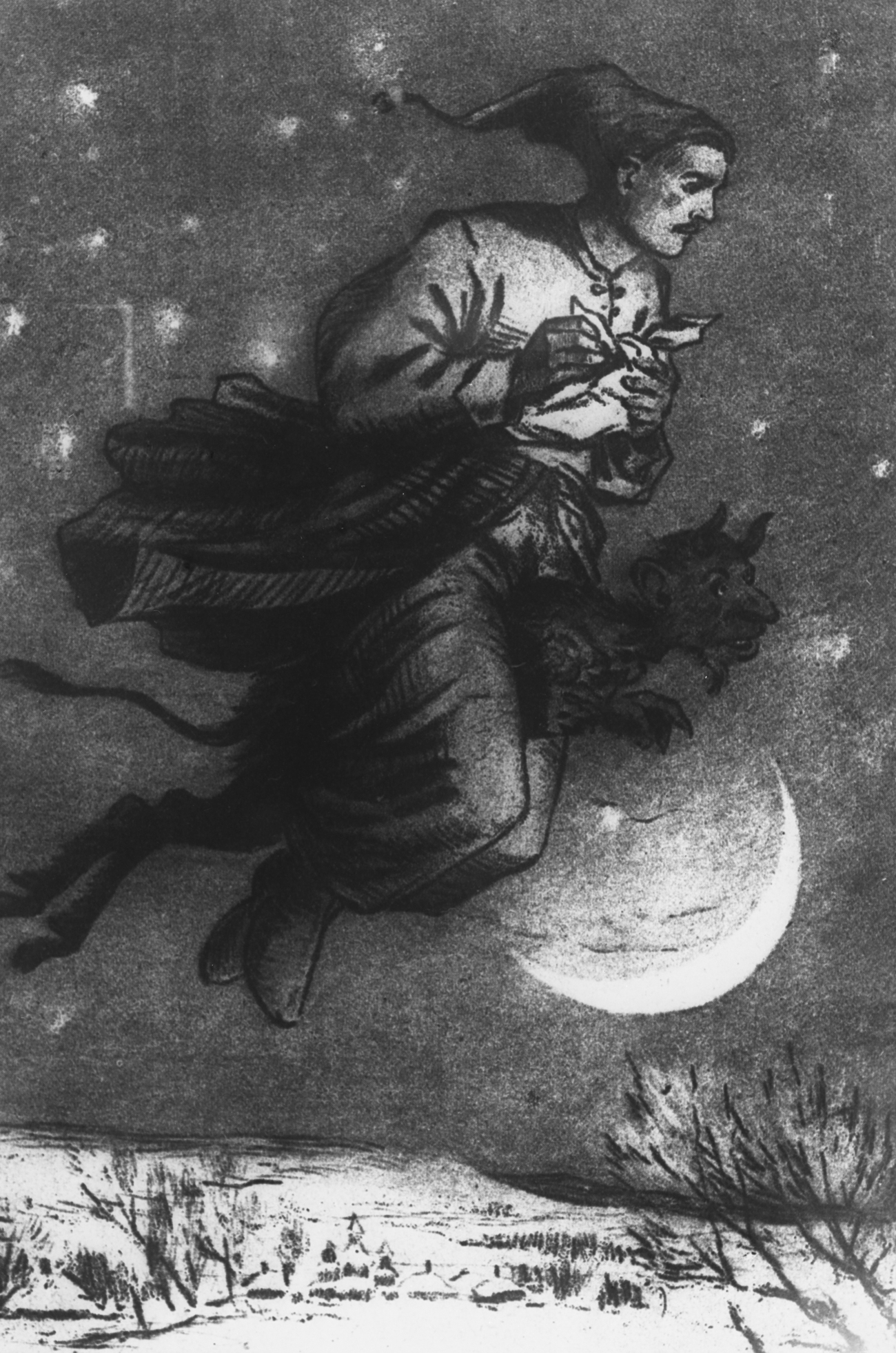 Resorting to the aid of evil spirits, the protagonist is able to conquer the heart of his haughty beloved.

“The last day before Christmas had just closed. A bright winter night had come on, stars had appeared, and the moon rose majestically in the heavens to shine upon good men and the whole of the so that they might gaily sing carols and hymns in praise of the nativity of Christ. The frost had grown more severe than during the day; but, to make up for this, everything had become so still that the crisping of the snow might be heard nearly half a verst round. As yet there was not a single group of young peasants to be seen under the windows of the cottages; the moon alone peeped stealthily in at as if inviting the maidens, who were decking themselves, to make haste and have a run on the crisp snow. Suddenly, out of the chimney of one of the cottages, volumes of smoke ascended in clouds towards the heavens, and in the midst of those clouds rose, on a besom, a witch.” 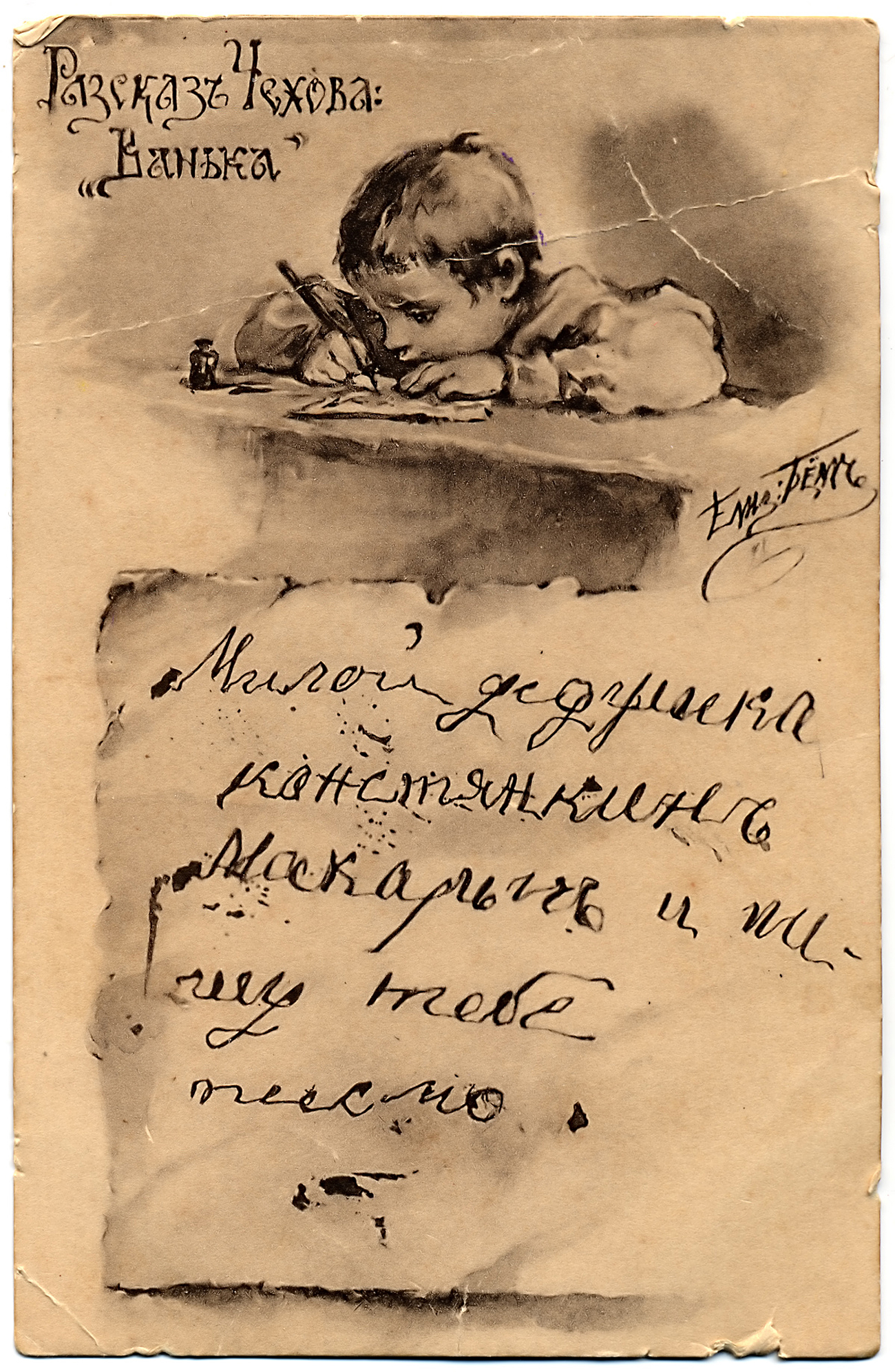 In another story that takes place on Christmas Eve, a nine-year-old orphan boy writes a letter to his grandfather in the village, asking him to take him away from Moscow, where he is treated poorly. But the boy forgets to write the address on the envelope, indicating just "To grandfather's village…"

“The air still, transparent. fresh. It was a dark night, but the whole village with its white roofs, the smoke rising from the chimneys, the trees, silver with rime, the snow-drifts, could be seen distinctly. The sky was sprinkled with gaily twinkling stars, and the Milky Way stood out as clearly as if newly scrubbed for the holiday and polished with snow....” 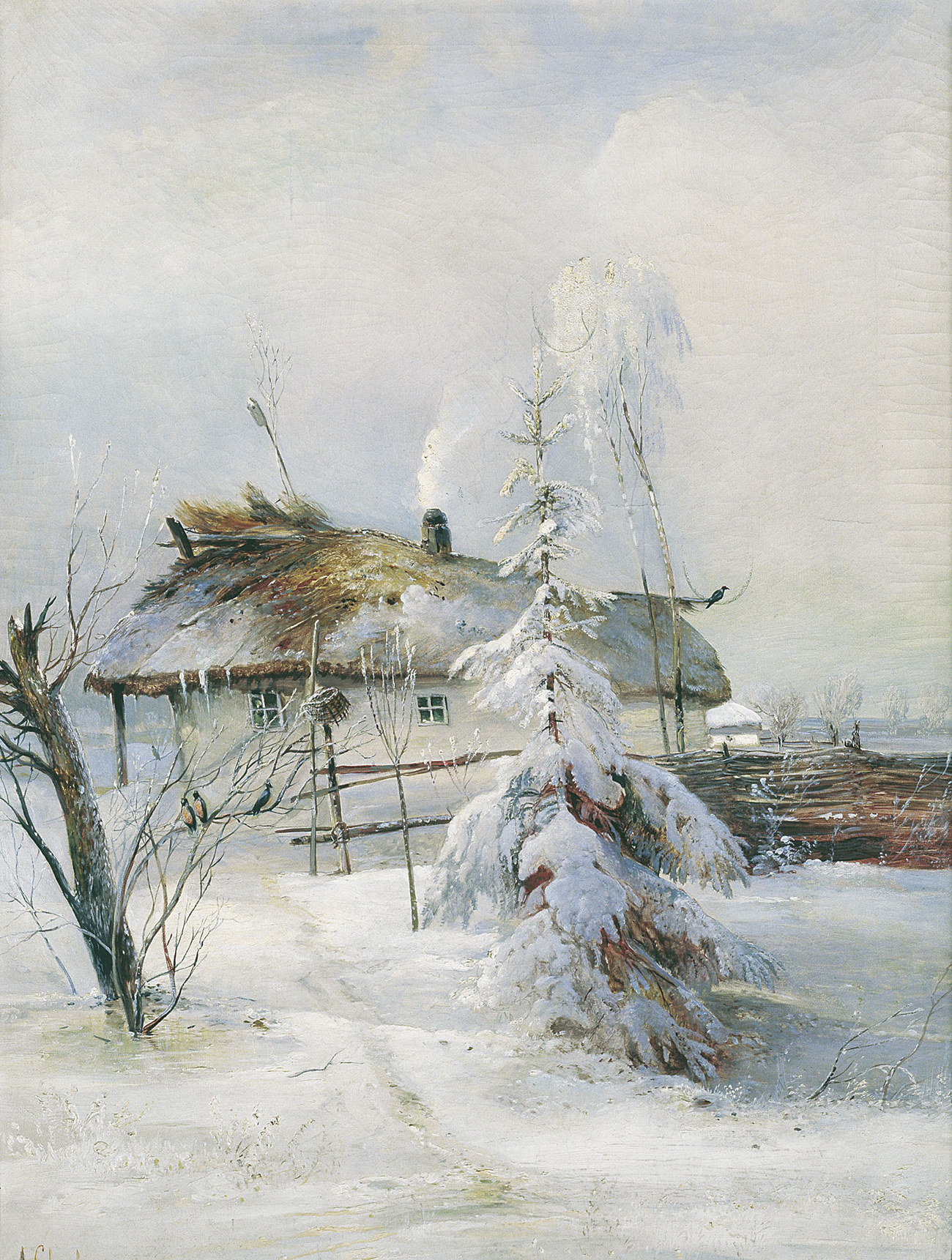 The master of landscape description, Turgenev also could not resist the beauty of the Russian winter.

“Six months passed. White winter had set in the cruel stillness of cloudless frosts, with its thick crunching snow, rosy hoarfrost on the trees, pale emerald sky, wreaths of smoke curling above the chimneys, steam emerging from momentarily opened doors, with those fresh faces which look bitten by cold, and the hurried trot of shivering horses. A January day was drawing to its close; the evening cold pierced keenly through the motionless air, and a brilliant sunset was rapidly dying away.” 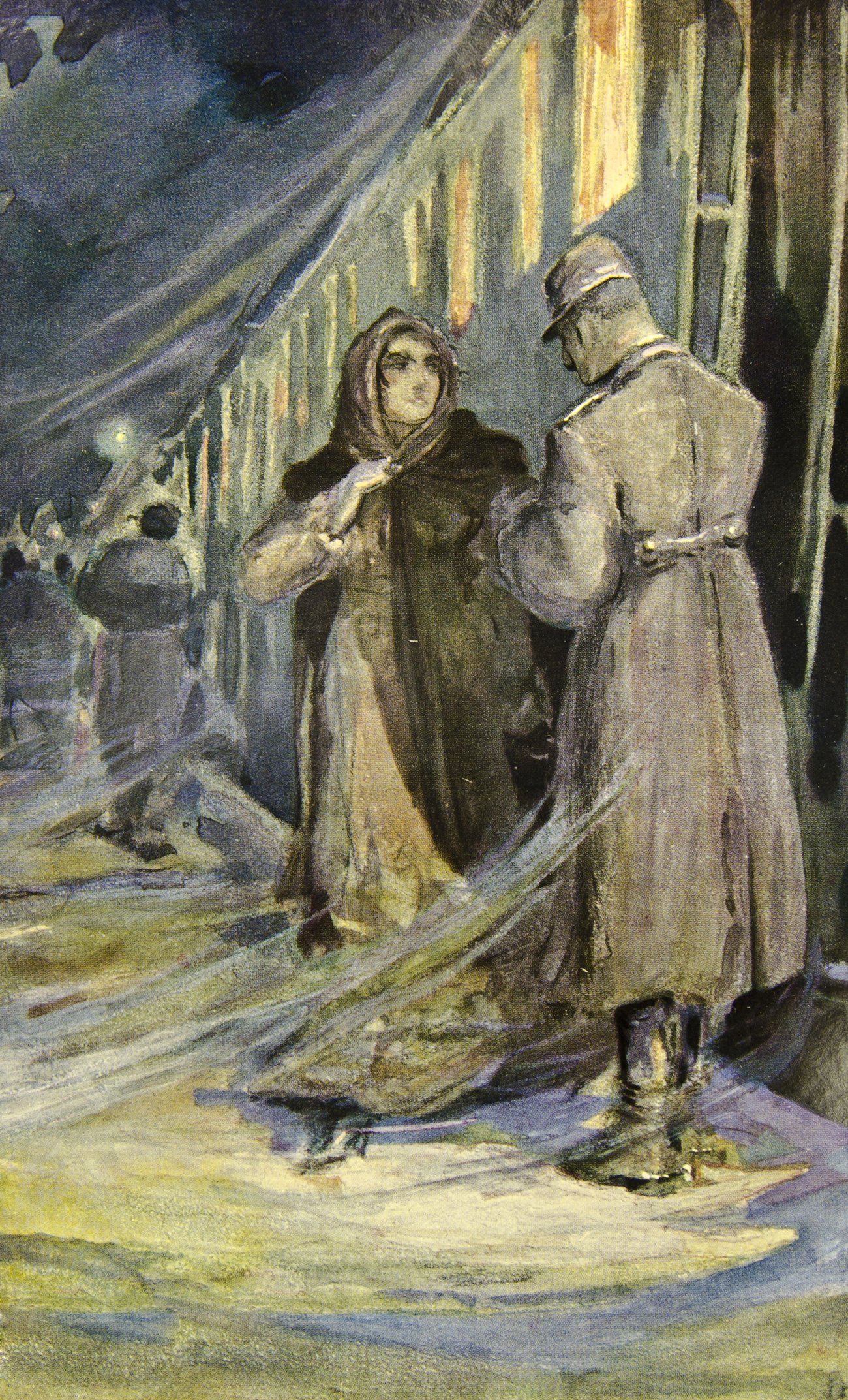 Tolstoy's raging nature admonishes man about his imminent hardships, expressing his internal condition and predetermining his fate. Thus, before her first encounter with Vronsky, Anna finds herself in a terrible blizzard.

"The racing tempest rushed whistling between the wheels of the carriages about the scaffolding, and round the corner of the station. The carriages, posts, people, everything that was to be seen was covered with snow on one and was getting more and more thickly covered. For a moment there would come a lull in the storm, but then it would swoop down again with such onslaughts that it seemed impossible to stand against it. <…> And clutching at the cold doorpost, she clambered up the steps and got rapidly into the corridor of the carriage. But in the little she paused, going over in her imagination what had happened.”

(The Harvard Classics Shelf of Fiction, 1917) 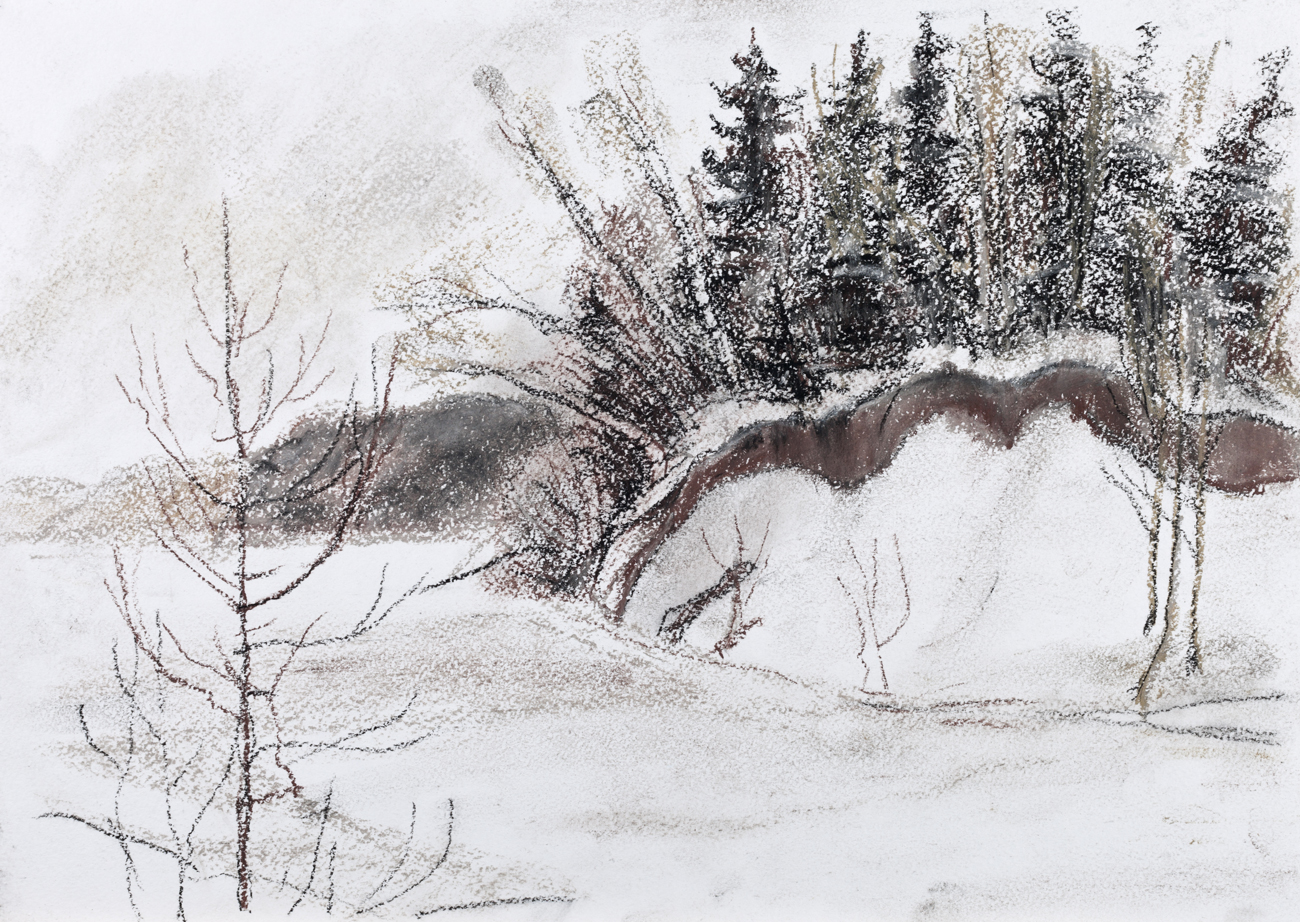 Abrupt coast of the river in winter / Source: Shutterstock/Legion Media

A boy named Nikita remembers how he once lived in the village. The novella depicts cold and tranquil childhood games.

“Nikita ran down the crunchy steps from the porch. At the bottom stood a brand-new pinewood sled with a bast rope attached to it. Nikita looked at it — it was solidly made, he tried it — it slid easily; he slung the sled over his shoulder, took up a spade which he thought he might need and down the path the whole length of the garden to the dam. There stood huge willow-trees — they reached almost to the sky — all laden with hoar-frost so that each twig looked as though it were made of snow.

"Nikita turned to the right, towards the river, and tried to keep to the road, walking in other people's footprints <…>.

"On the steep banks of the Chagra huge fluffy snowdrifts had piled up during the past few days. In some they formed promontories that overhung the river. If you stood on one of these promontories the snow would give way, collapse and the whole snow mountain would go tumbling down in a cloud of white powder.” 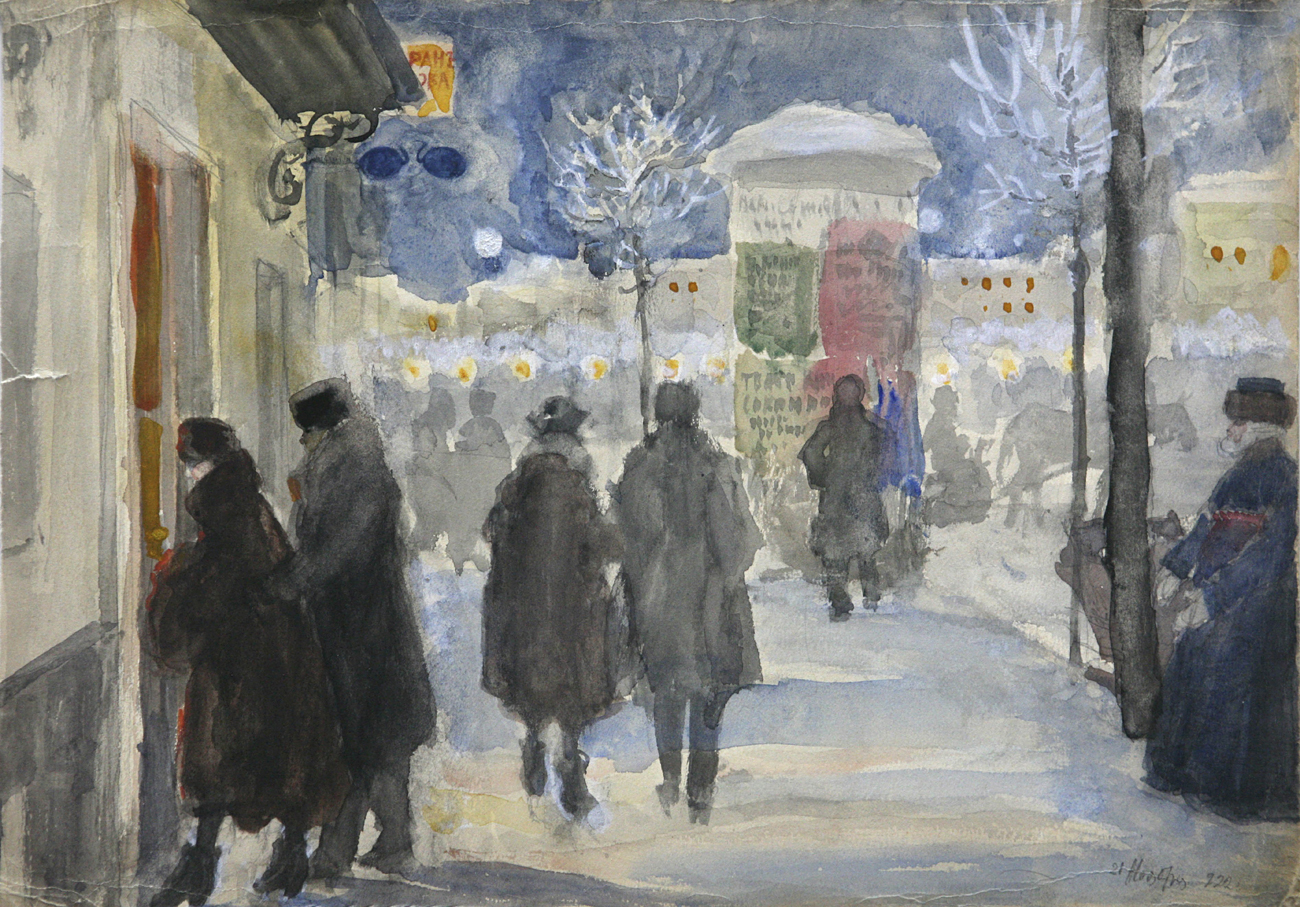 Pasternak's severe winter cold is contrasted with the warmth of human relations, which is embodied by the light of fire and candles that escapes through the windows. This light soothes us and gives us hope that spring will definitely arrive after winter.

“Only now, when she came out for the second time, did she take a look her. It was winter. It was the city. It was .

"It was bitter cold. The streets were covered with a thick, black, glassy layer of ice, like the bottom of beer bottles. It hurt her to breathe. The air was dense with gray sleet and it tickled and pricked her face like the gray frozen bristles of her fur cape. Her heart thumping, she walked through the deserted streets past the steaming doors of cheap teashops and restaurants. Faces as red as sausages and horses’ and dogs’ heads with beards of icicles emerged from the mist. A thick crust of ice and snow covered the windows, and the colored reflections of lighted Christmas trees and the shadows of merrymakers moved across their chalk-white opaque surfaces as on magic lantern screens; it was as though shows were being given for the benefit of pedestrians.”