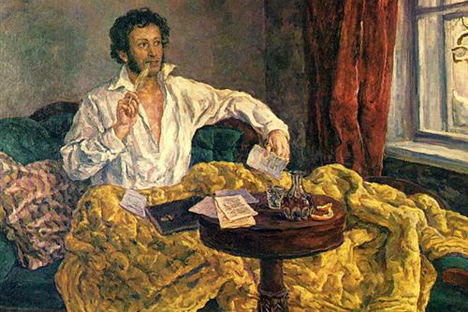 October's arrival may signal melancholy for some, but Pushkin produced his best work in the “melancholy season.”

Alexander Pushkin arrived at his family estate of Boldino on Sept. 3, 1830, and, due to an outbreak of cholera, could not return to Moscow until December.

The three months Pushkin spent at Boldino were an enormously creative time for the poet – when he wrote the works that became the cornerstone of Russian literature. His most notable success was the novel-in-verse Eugene Onegin, which has been dubbed an "encyclopedia of Russian life". He also wrote Little Tragedies – The Miserly Knight, Mozart and Salieri, A Feast in Time of Plague and Don Juan.

“I have written five novels in prose, from which Baratynsky neighs and beats," Pushkin wrote to his publisher Pletnev, referring to The Belkin Tales. He also wrote around 30 poems, as well as the verse novella The Little House in Kolomna.

This unique time is called the "Boldino Autumn", and Pushkin deliberately returned at the same time three years later, writing The Bronze Horseman, The Tale of the Dead Princess and the Seven Knights, The Tale of the Fisherman and the Fish and The Queen of Spades.

Fall was always Pushkin’s most fruitful period. He was restless, so the mud, bad weather, short daylight hours and everything else that people usually do not like about fall would become a natural barrier to him, allowing the poet to concentrate on his main task – writing.

In his country retreat, no one prevented the poet from letting his creative genius run loose: "Imagine: steppe and more steppe; no neighbors at all; you can ride horses as much as you want, write home as much as it pleases you, and you will be disturbed by no one,” he wrote to his publisher, promising to provide a great deal of poetry and prose.

Starting from his 1824 exile to his other family estate, Mikhailovskoye, for his freethinking poems, Pushkin would try to find some solitude in late fall every year to write. And the worse the weather was outside – the better it was for the poet.

… or a delight for the eyes?

In the seventh chapter of Eugene Onegin and the poem Autumn, Pushkin gives a detailed description of the Russian fall from the beginning of October, when "the woods have tossed / Their final leaves from naked branches" and you can see "the lavish withering of nature, / The gold and scarlet raiment of the woods" – until November, when "shorter had the days become. / The forests in mysterious gloom / Were stripped with melancholy sound" and the "weary season" was approaching.

In the poem Autumn, Pushkin calls this time of year a "melancholy season," and at the same time a "delight for the eyes," because of its colorful leaves. The same poem contains the key to understanding Pushkin's true attitude to fall.

After completing the description of the nature, the poet turns to his inner state. Fall makes him forget about everything and turn to his imagination: "And in my head thoughts spring into existence, / And rhymes dance out to meet them, and the hand / Stretches toward the pen, the pen to paper."